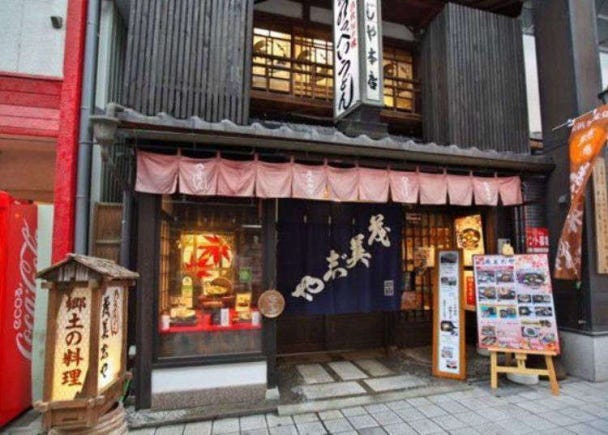 Inside Momijiya, Japan's Century-Old Udon Shop - And the Shopkeeper Who Birthed A Nagahama Specialty

Noppei Udon Momijiya is a noodle shop in Nagahama City, Shiga Prefecture, that boasts a history of over 100 years. The third-generation owner, Tsujiki Hachiro, holds the secret to the shop's key recipe, Noppei Udon.

This thick, popular, specialty soup is also, to say the least, the dish representative of Shiga Prefecture in the winter. Today, we head to the shop to find out just what makes it so popular.

A Shop Interior Reminiscent of a Showa Era Castle Town

Noppei Udon Momijiya is only 5 minutes on foot from JR Nagahama Station, and nearby to the Kurokabe Glass Shop in the center of Kurokabe Square. It sits quietly in a corner of the old arcade street of Otemon-dori. 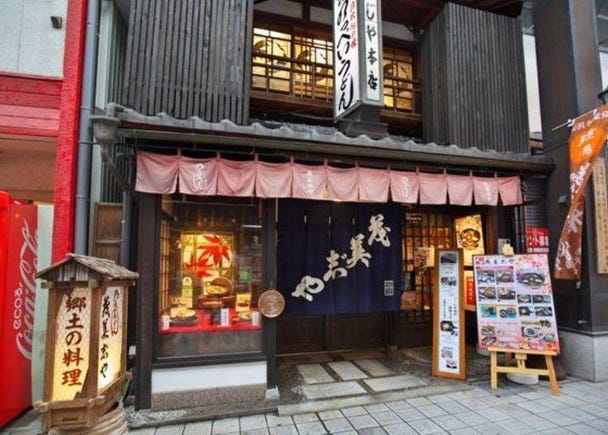 ▲The shop, a renovated tenement house, stretches way towards the back in a structure form called “unagi no nedoko,” or “bed of eels.”

Before proceeding through the noren (shopfront curtains), you will see some handiwork decorated with foliage in the shop windows, just as the name of the shop itself, “Momijiya,” suggests. (Momiji = foliage). It is said that the shop was opened up as a cafeteria in 1912 by the grandmother of the current shop owner. 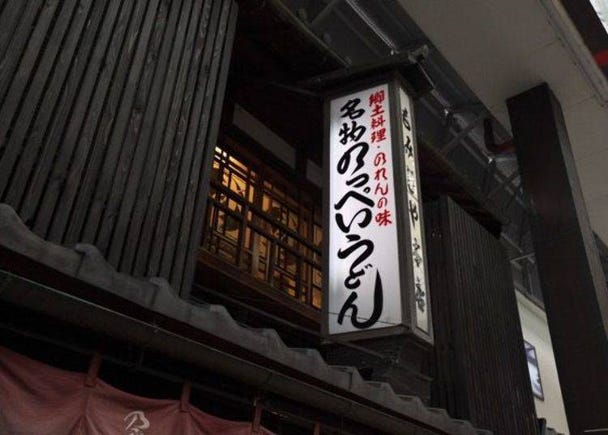 Inside the shop is an L-shaped chair against a wall that is decorated with paper chopstick wrappers pushed into the little frames. On those wrappers are messages written by previous visitors to the shop. 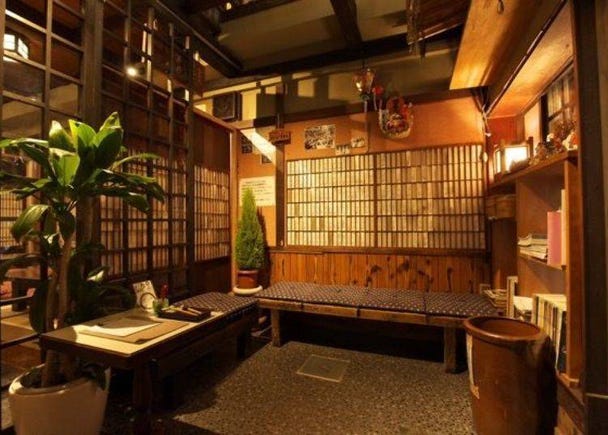 ▲The shop interior is a calm space with a warm, welcoming atmosphere, just like a grandmother’s house would be. 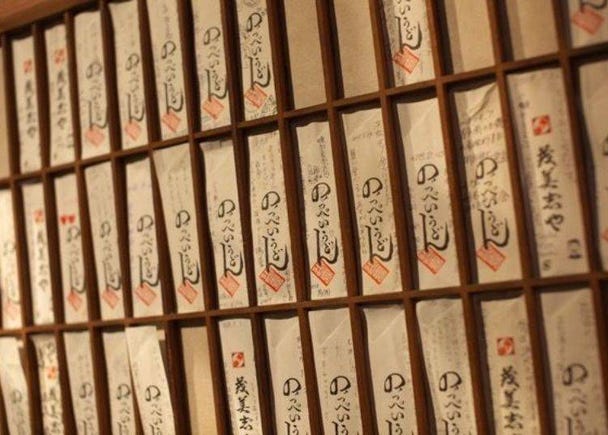 ▲Before going home, you can leave a note as a memory of your trip 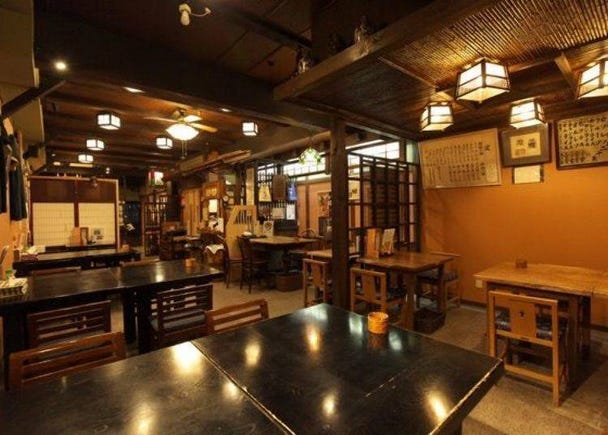 ▲The table seats in the back of the shop. You will often find them crowded with customers during lunch time. 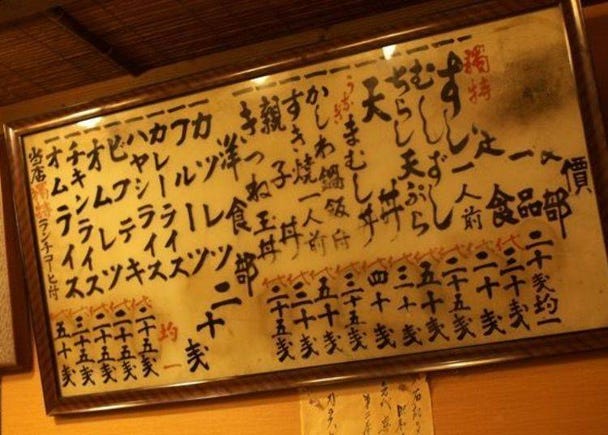 ▲A pretty fancy line-up of menu items for the time of its establishment, including cutlets and chicken rice.

Towards the back of the first floor, you can see the original menu from when the shop was still a cafeteria hanging from the wall near the table seats. It is a valuable item now, written by hand on a thin glass, and is said to have been discovered in 1940, wrapped carefully in straw. 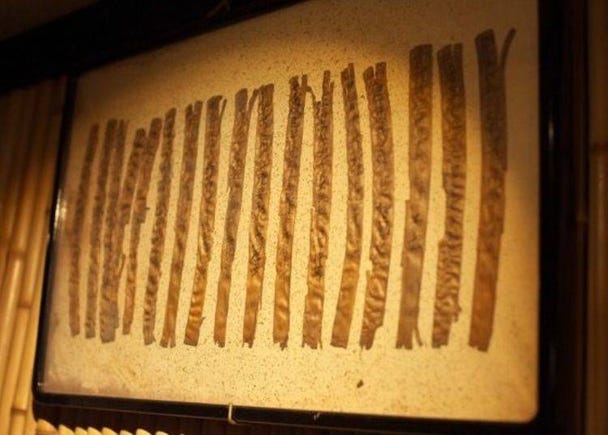 There is also a valuable wooden board with written text called a “kyoumon” on display in the shop. The text appears to be from the Lotus Sutra, discovered underground in 1970. The one decorating the shop is only one of many, most of which have been donated to nearby muse

Along with these, there are also pre-war tanuki Shigarayaki wares, and the indigo-dyed Happi coat actually worn by the second-generation shopkeeper. As you can see, as such a long-standing shop it is not only a place to be enjoyed for the food, but also as a museum.

Now, On to the Specialty Noppei Udon!

One of the things we can’t neglect to mention about Noppei Udon is the unique, carefully-selected ingredients used for the soup stock. This shop uses a mix of 5 different varieties of “bushi,” or fish flakes, such as katsuo (skipjack tuna), with rishiri-kombu, a type of kelp. The soup, cooked in a pot at the back of he kitchen, is a beautiful amber color, giving it a rather elegant appearance. 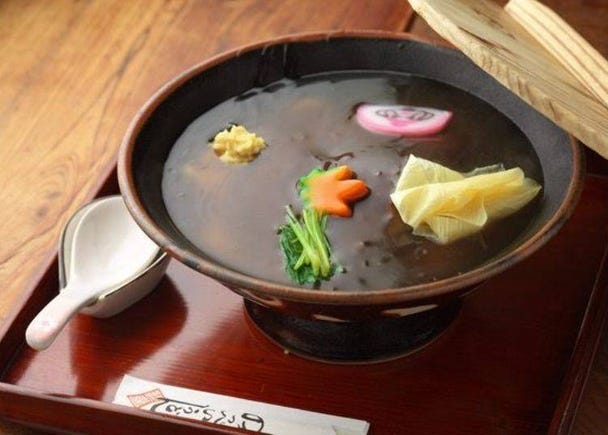 At last, here is the Nagahama Specialty, Momijiya’s Noppei Udon (1100 yen, tax included). The appearance of the soup along with the thick aroma hits you as soon as you take off the lid. Yuba is also served with the udon, and if you look closely you will also see... a giant shiitake mushroom! 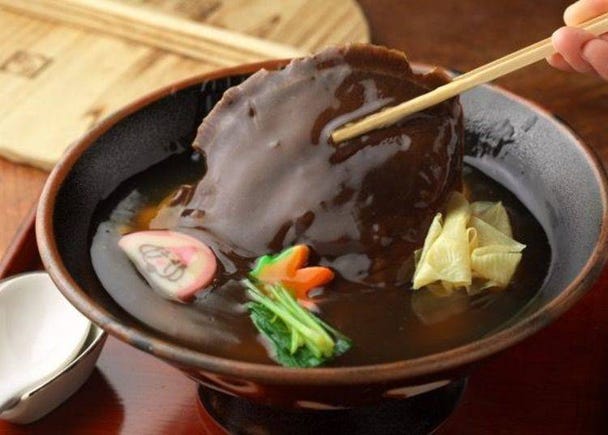 The shiitake seems almost too big for the bowl! Coupled with the soup broth, you really get a sense of the thickness of the soup. Also, it is this very shiitake mushroom that makes the taste and the aroma of the soup all the more rich. 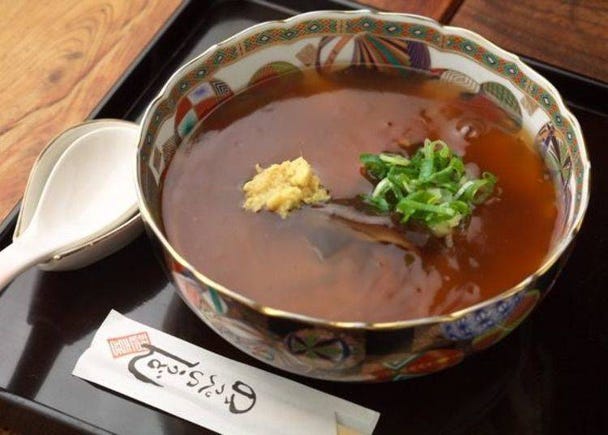 The bowl used for the Omi Beef Noppei Udon is an Arita ware. The aroma of the soup is unbearably delicious...

...so unbearable, that we have no choice but stop what we are doing and eat, if for no reason other than to quiet the growling of our stomachs! 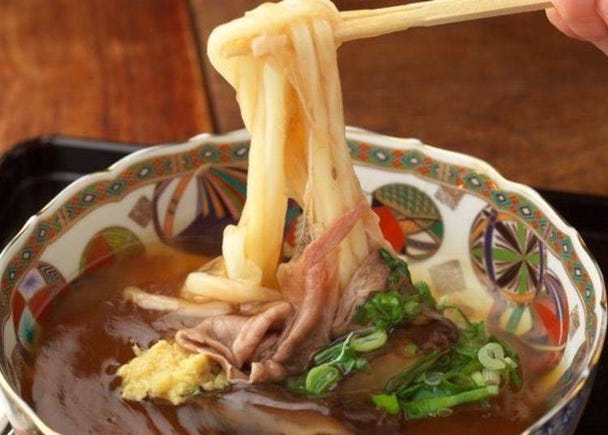 ▲The thick soup sticks to the noodles, so they are a little difficult to grab

The soup is thick and hot, so it is hard to eat the entire first bite in one slurp! We enjoy it little by little, blowing on the noodles as we go along. They are soft and carry the aroma of wheat, which after a while, also picks up the aroma of the seafood broth and bonito flakes. 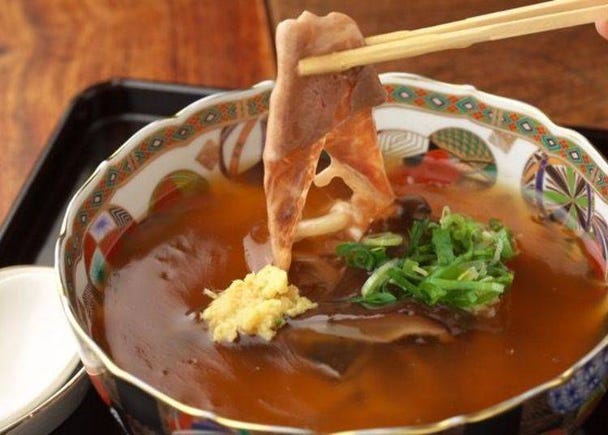 The beautifully marbled shabu-shabu Omi beef looks almost too delicious to eat. Though it is hard to see though the thick broth, there is about five times the amount of beef as that shown! The Omi beef was super soft, yet the fatty sweetness of the meat still doesn’t beat the soup as a whole. 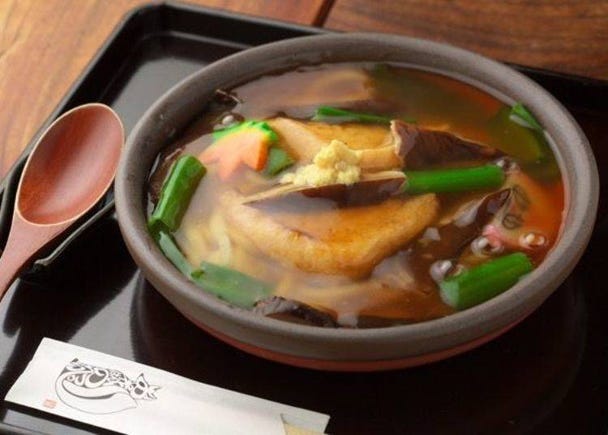 ▲The ginger garnish pairs well with the fried tofu

And you can’t forget about the other popular menu item, Ohana Kitsune Noppei Udon (1000 yen, tax included)! It is fragrant and warm, with slightly burnt fried tofu, and accented with onion, making for another dish too delicious for words.

Unlike the Omi Beef Noppei Udon, which uses the same broth, the Ohana Kitsune Noppei Udon also includes the delicious flavor and texture of vegetables, which go well with the taste and fragrance of the fried tofu slices. 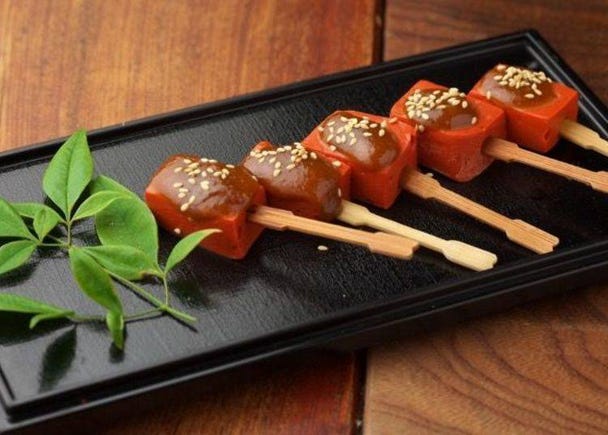 There is also a number of other affordable menu options, including various rice bowls, sushi, and Noppei Udon set menus.

A Commitment to Noppei Udon

Throughout the changing times, Momijiya has remained popular with its customers. Third-generation shop owner Mr. Hachiro is a local Nagahama native with a love for his hometown and a smile to match. When it comes to his udon, his commitment is undeniable.

Once a cafeteria, Momijiya was remodeled into a local restaurant by its second-generation owner with the establishment of Kurokabe Square in 1988, in which Noppei Udon was officially added to the shop’s signboard menu. This was when shop owner Mr. Hachiro realized, Noppei Udon is indeed a specialty of Nagahama. Since then, it has kept its same flavor for over 30 years. 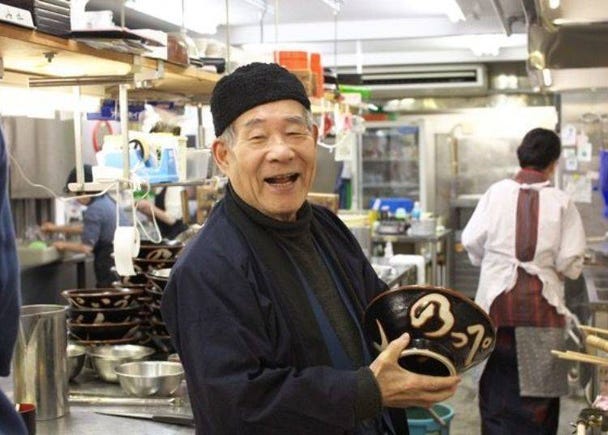 Mr. Hachiro is especially particular about the quality of the noodles served in his shop! Every afternoon, he has skilled udon craftsmen prepare the noodles in the back. They are left overnight, and only those noodles from which the smell of the powder has disappeared are used the next day. Of course, no additives are used at all, either. 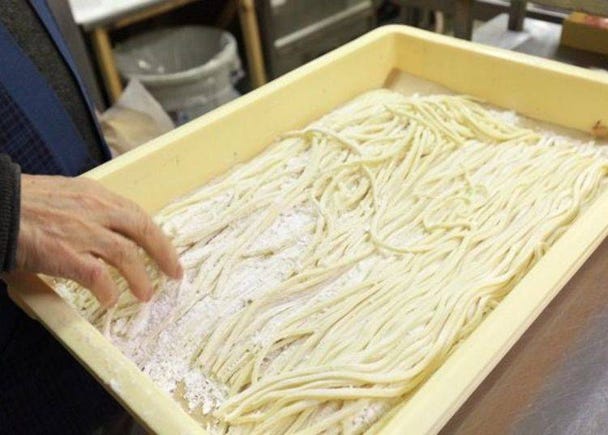 ▲The appearance alone shows the moist, doughy quality of the udon noodles

There are two pots for slowly simmering water at Momijiya. The owner’s technique is to cook the noodles as the water is boiling, making sure not to lower the water temperature as the noodles are simmering. 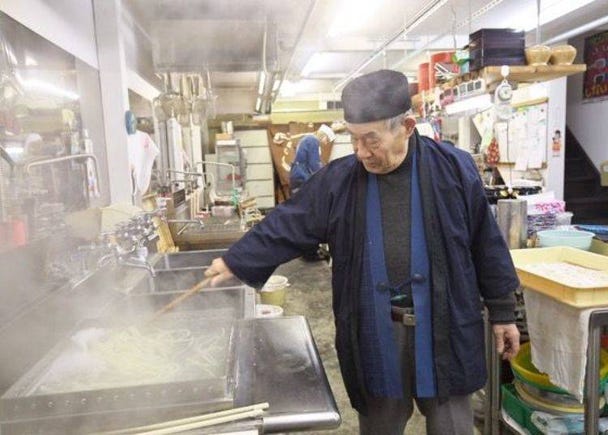 ▲Mr. Hachiro puts on the face of a true craftsman the moment he begins cooking the noodles

If the noodles start to move along with the boiling of the water, reduce the fire. It takes about 12-13 minutes in total to simmer. “Udon is a living thing,” states Mr. Hachiro. The noodles change in texture, flavor, and taste as time goes by, but that’s just one of the charms of udon. For Noppei Udon, the best noodles are those that are a little on the softer side.

As for the udon broth, it is the thickness that brings it to life! The one who comes to finish up the complex, fragrant and flavorful broth for the soup is none other than Mr. Hachiro’s wife, who has accompanied him here for many years. 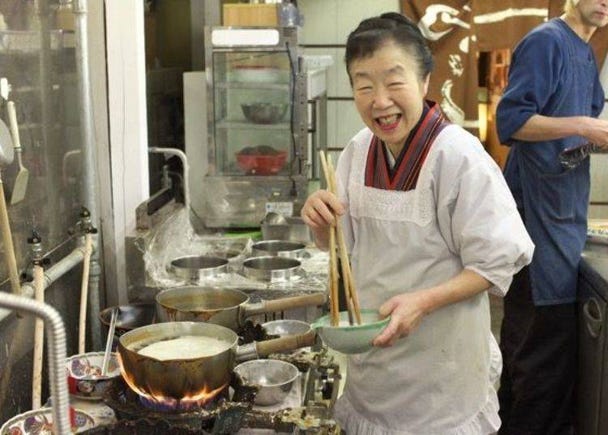 The shopkeeper’s wife finishes up the soup with a charming smile on her face. 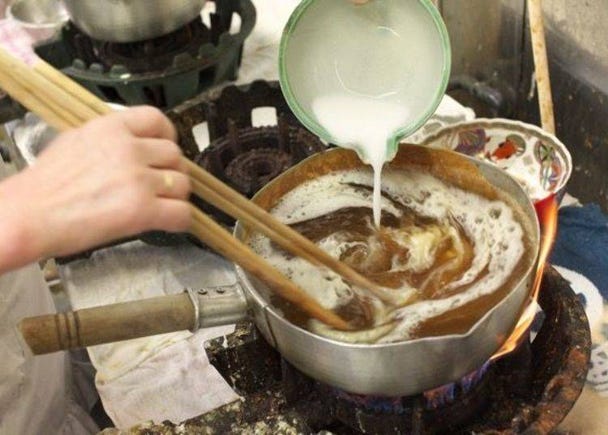 Using thick chopsticks, she stirs in potato starch several times. As she gradually stirs the soup, the kitchen fills with the delicious aroma of seafood and broth. 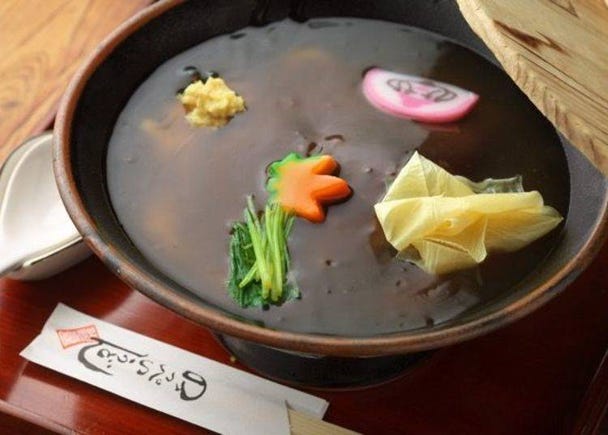 And here we have it! Soft udon noodles in a hot, thick broth. Just one bowl of udon is overflowing with the taste of the same passion and commitment put into every dish.

The Couple’s Real Secret Behind the Deliciousness of Momijiya’s Udon!? 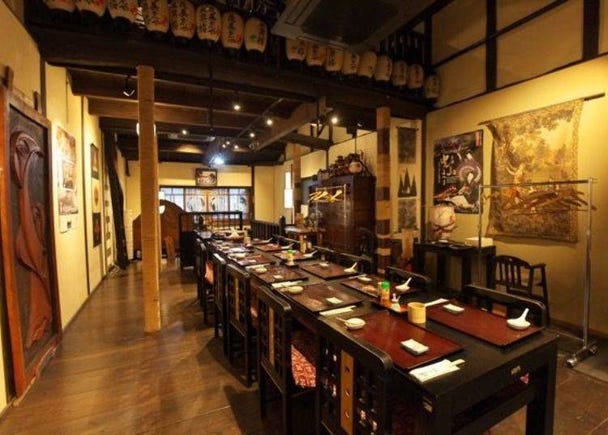 ▲Present-day second floor. A proud display of the shopkeeper’s furnishings.

In the past, the shop was both a residence and a restaurant. It is said the shopkeepers lived here with their children on the second floor until it was renovated in 2017. 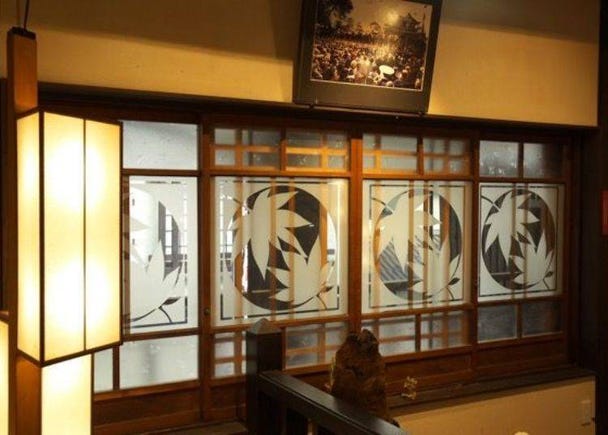 ▲The crest of autumn leaves, made to resemble holding hands

The window facing the shopping district displays an emblem of two autumn leaves. When Mr. Hachiro became the owner of the shop, he had this crest designed as a special order by a craftsman. The leaves are designed so that the tip of each one meet, resembling two hands holding. It is said to represent Mr. Hachiro and his wife. 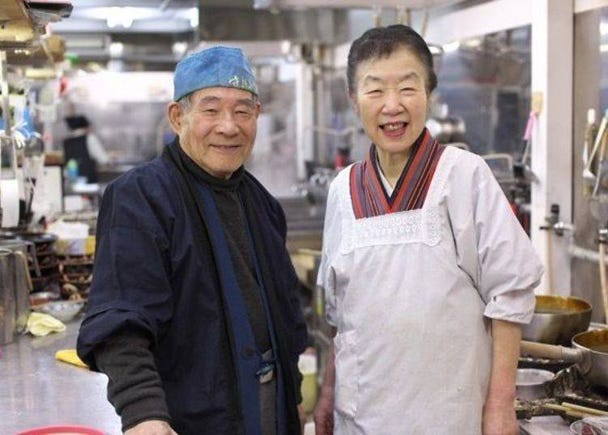 ▲Always a smile on their faces. A truly admirable couple! 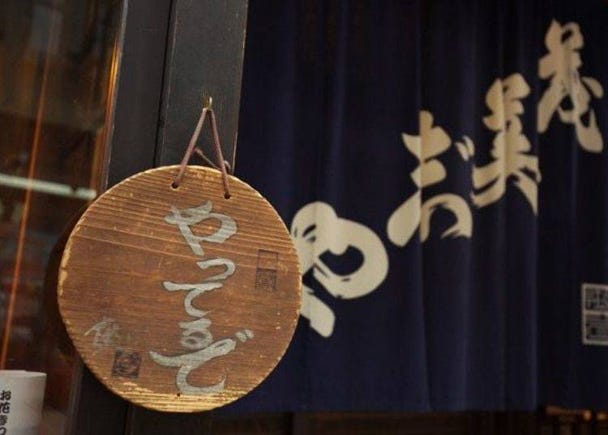 The udon and the broth, as well as the Nagahama shop owner and his family, create not just a delicious Noppei Udon, but the gentle taste of nostalgia. The hot soup and noodles of their udon will also warm your body and soul, allowing you to relax and enjoy as if you had come back to your own hometown.