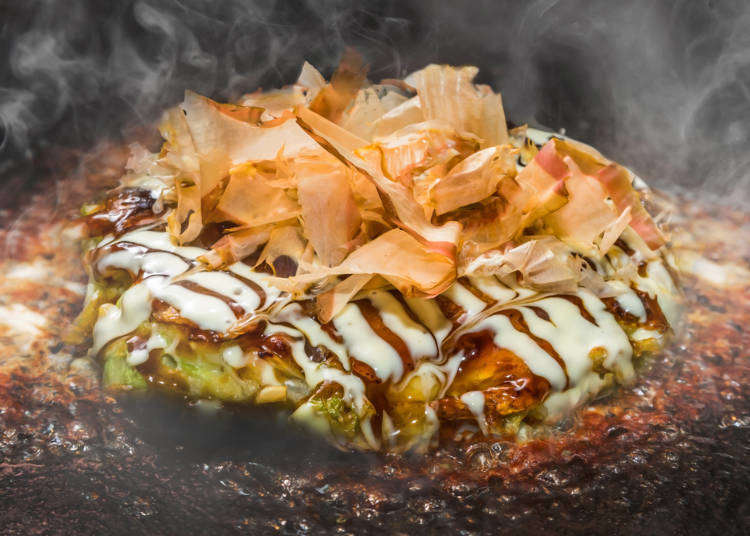 Osaka Cuisine: 5 Reasons Americans Were Shocked by Local Food! (Is it Alive!?)

Takoyaki, Okonomiyaki, Kushikatsu. When asked about Osaka cuisine, people have their opinions. 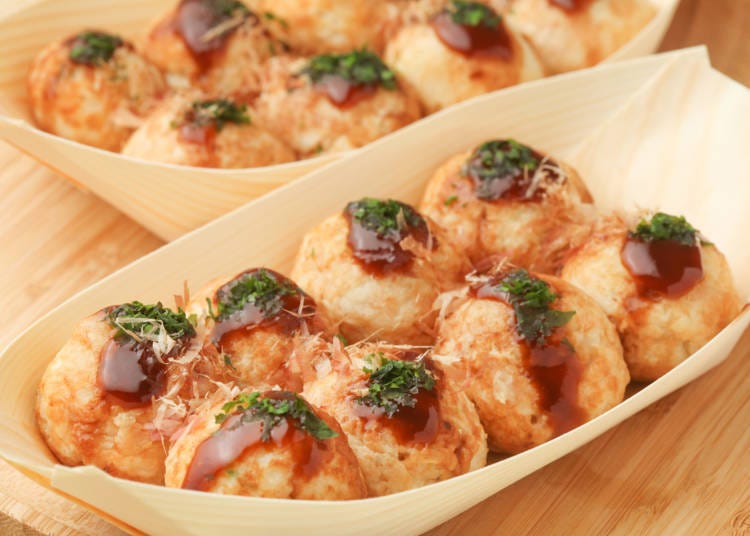 The most famous local Osaka cuisine is Takoyaki. Takoyaki is known around the world now, but there was a time when it was translated as Octopus Balls.

With a name like that, people would wonder what kind of dish is was?

Our New Yorker friend thought Takoyaki looked cute the first time he saw it. I guess it might look cute after hearing Octopus Ball and seeing real Takoyaki.

When you put it in your mouth, the combination of the sauce and mayonnaise is plentiful, and the texture of the octopus is excellent! Only one word can describe it, and it is delicious! However, some would wonder where the octopus is?

Because depending on the shop, the octopus can be tiny and hard to find. If you want to feel the presence of the octopus, we recommend looking at store reviews for shops with large octopus chunks.

2. Is it Alive!? It’s up to Luck if you can Find Your Favorite Style of Okonomiyaki 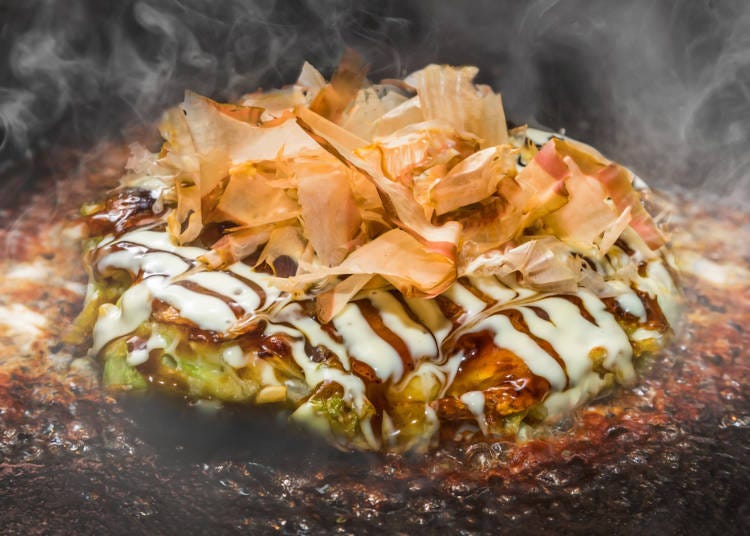 Many shops will cook okonomiyaki on a hotplate in front of you. When our friend saw the bonito flakes move on top of the okonomiyaki, it reminded him of odori-gui (eating raw seafood while it is still moving) and thought it was alive for a moment!

Also, when they explained what bonito flakes were, they said it was fish flakes, which gave the impression that it would have a strong fish taste. Plus, it’s hard to imagine what kind of ingredients go inside okonomiyaki just from the name.

The first time our friend mustered his courage and took a bite, the rich flavor of the sauce and the juicy mixture of the vegetables and meat was a shocker. Another interesting point of okonomiyaki is the difference in cooking methods and ingredients for the Osaka style and Hiroshima style.

Just as the name implies, okonomiyaki (literally meaning in Japanese, ‘cooked the way you like’ or ‘what you like’), there are so many different types of okonomiyaki depending on the restaurants. Some might be heavy, or not to your liking, kind of how the Osaka style and Hiroshima style is different.

One could say it is sort of like finding the ramen you like. It’s up to luck, and that’s why our friend thought it was like playing roulette.

Incidentally, why do bonito flakes move? As they are very thinly sliced pieces of dried, fermented, and smoked bonito, they move because of the heat of the food they are garnishing.

3. No Double Dipping! Kushikatsu is on a Different Level Compared to Other Deep-Fried Dishes 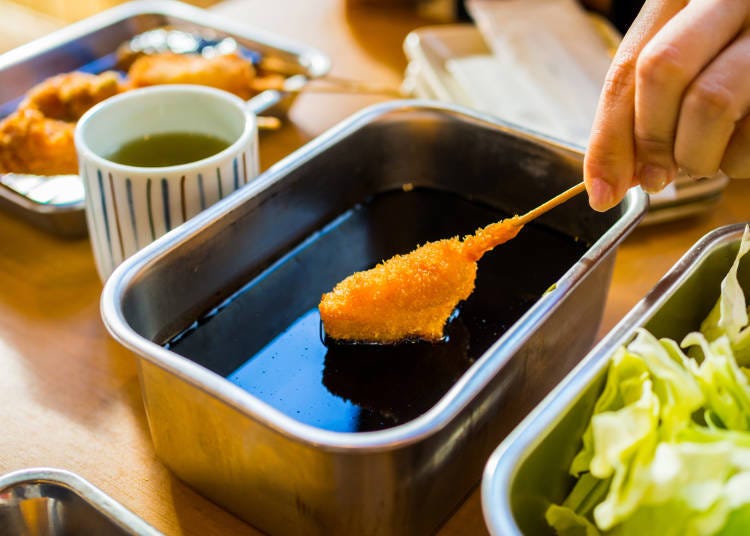 A famous deep-fried dish around the world is fried chicken. In that sense, kushikatsu isn’t as renowned as takoyaki or okonomiyaki. However it is a street food that you can’t miss. Compared to the other fried food, for some reason, kushikatsu just tastes better. It makes you wonder if they use a different type of oil because the crust isn’t that oily, and the meat is still juicy. Our New Yorker friend said that Japanese deep-fried food, including karaage, is delicious.

Our friend also gives a seal of approval to the sauce, which prohibits “double-dipping” and adds to the total flavor of kushikatsu. He said that in the States, there are many types of sauces used for various dishes, but the Japanese sauce has concentrated sweetness and umami to create a deep flavor that is magnificent.

In that sense, you can enjoy the deliciousness of the sauce in everything we have covered so far. Definitely an Osaka cuisine worth trying!

4. Charm of the Soft but Chewy ‘Hormone’ Osaka Cuisine 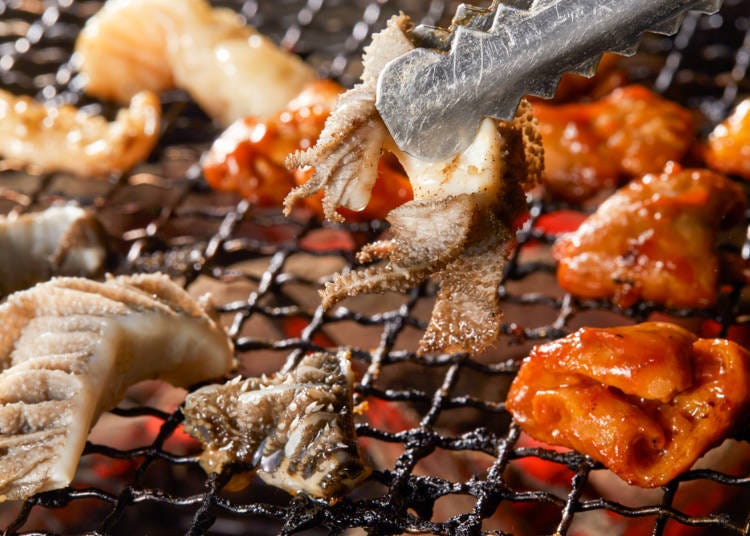 Now, this is a curious dish, because in English, ‘hormone’ has a very different meaning. In fact, when our friend first came to Japan, he wondered how exactly people “are hormones.”

Hormone dishes are made with beef and pork offal. Hormone dishes exist all over Japan, however there is a theory that the term hormone comes from the Osaka dialect “horu mono,” which means to “discard.”

There are various ways to prepare hormone dishes such as stewing or boiling it, however, in Osaka the most famous hormone dish is Hormone Yaki and it is grilled. We wondered how our New Yorker friend thought about eating hormone, where eating offal isn’t common in the northern part of the U.S.

Once you get hooked on the texture of this Osaka cuisine, it’s over. The way hormone is flavored and prepared is different for every shop, it’s always fun going to different hormone shops to find the taste you like. 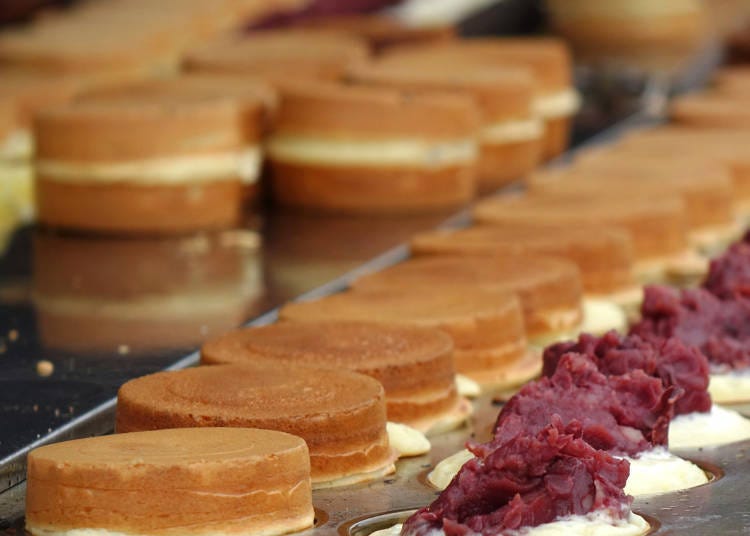 Taiko manju is a Japanese sweet that wraps red bean paste in flour dough. Depending on the region, it is called Imagawa yaki, Oban yaki, or Kaiten yaki, but it is a Japanese fast food sweet that is loved around the country. There are many shops that have an outdoor section with a special hotplate and serves freshly cooked taiko manju.

Our New Yorker friend approved of Taiko Manju and said, “It’s the perfect snack!” Anko (red bean paste) isn’t yet that widely known around the world like matcha, however, we strongly recommend trying it out when you visit Japan. Anko is made from azuki beans (red mung bean) and has lots of nutrient values such as protein, minerals, and polyphenol, so it makes this sweet healthy. If you come across it, give it a shot!!

Here were the dishes that were a hit with our New Yorker friend. In the Kansai region, there are many things to try out, such as obanzai in Kyoto or Kobe beef in Kobe. Seeing is believing, during your visit, please try out these local delicacies!

We also recommend these restaurants to try Osaka cuisine for yourself. Save time and hassle - book your table online today!

Private Osaka Castle Walking & Dotonbori Food Tour!
Embark on a Delicious Osaka Night Food Tour
Get Osaka Gourmet Walk Food Ticket
*This information is from the time of this article's publication.
*Prices and options mentioned are subject to change.
*Unless stated otherwise, all prices include tax.