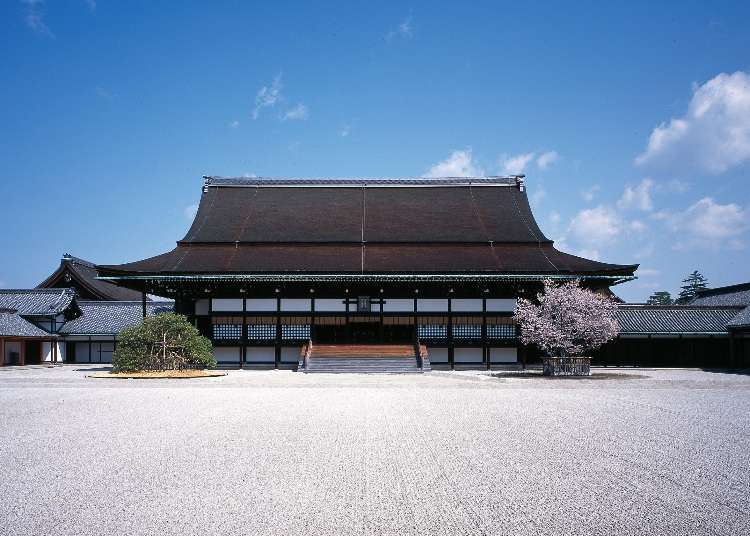 Kyoto Imperial Palace is a hotspot for tourists. Surrounded by the greenery of the national garden, this is where generations of emperors lived for around 540 years, from the time Emperor Kogon ascended to the throne in 1331 until Emperor Meiji transferred the palace to Tokyo in 1869.

With its role as imperial palace completed, today the palace is open to the public year-round, available for viewing without prior reservation.

As an important facility to the imperial household, you cannot enter inside the building, but a tour route has been set up to allow viewing of some of the palace's many valuable furnishings.

From the screen door paintings that adorn the rooms to the seasonal changes of the courtyard, the Kyoto Imperial Palace is full of interesting features. This article will guide you through a list of 5 spots that are especially worth checking out. 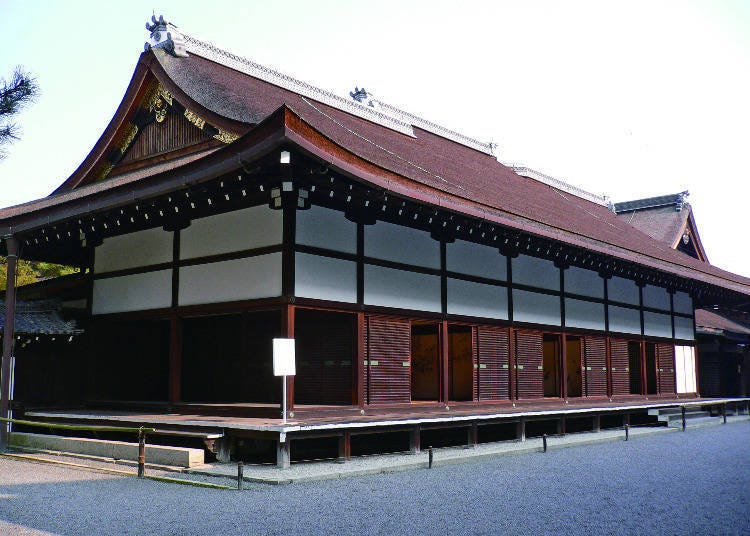 The entrance and exit to the Kyoto Imperial Palace tour route is the Seisho-mon Gate, located on the western side of the palace. Once you enter through the gate, on your right will be the Mikurumayose, used as the official main entrance for visitors.

Through there is the "Shodaibunoma" hall, which used to be the visitor waiting room. The building consists of three main rooms, each of which is named after the paintings on their fusuma screen doors: Tora-no-Ma" (Tiger Room), "Tsuru-no-Ma" (Crane Room), and "Sakura-no-Ma" (Cherry Blossom Room).

The screen door paintings can be viewed from the tourist path. Among the rooms, you'll want to pay special attention to the Tora-no-<a, with its dynamic and powerful paintings of tigers about to drink water and adorably frolicking.

Highlight 2: The "Shishin-den" Ceremonial Hall and its Traditionally Crafted Roof 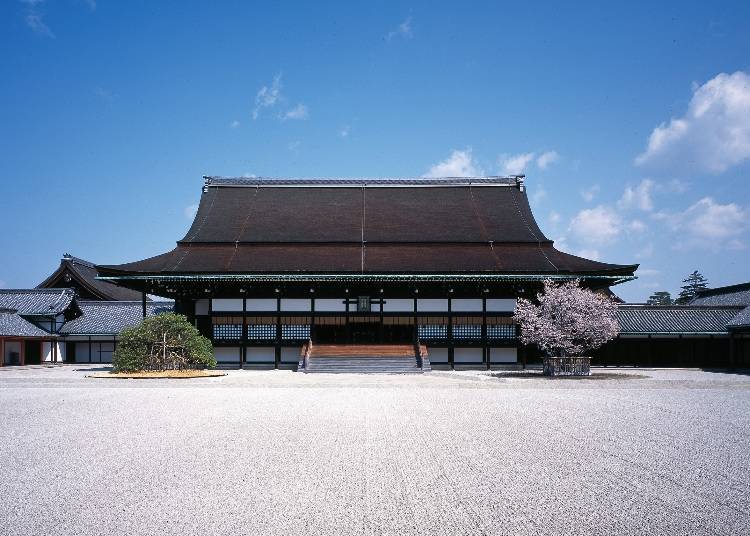 The main hall called the Shishin-den, surrounded by a corridor of white walls and vermillion-red colored pillars, is the most formal hall of the palace, where important ceremonies such as ceremonies of the Accession to the Throne were held. The roof was constructed using the traditional method "hiwadabuki", by which bamboo nails are used to thatch pieces of cypress bark into layers of roofing.

Inside the building, with its raised-floor style palace construction, are the thrones for the emperor and empress, called Takamikuna and Michodai. In front of the Shishin-den hall is the white sand southern garden, and when facing the hall, to your left will be the "rightward tachibana tree" and to your right the "leftward cherry tree". 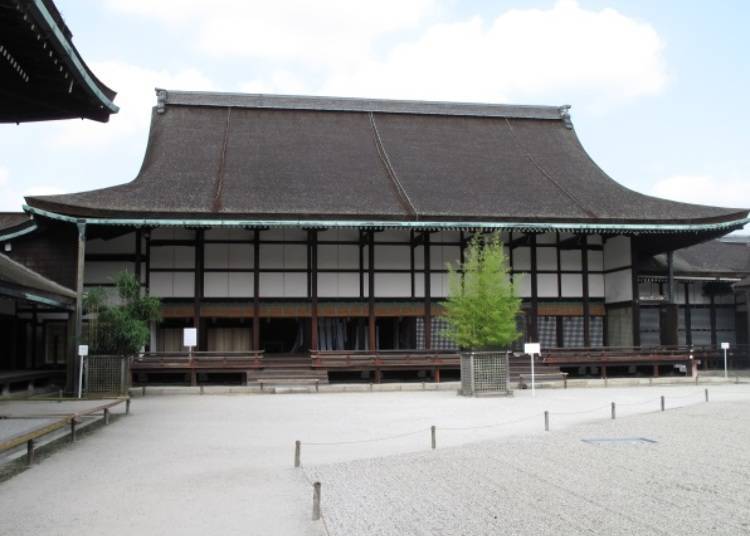 The Seiryo-den is a reconstruction in Heian period style, with a gabled, cypress-thatched roof and shinden-zukuri layout.

In the eastern garden of the Seiryo-den are bamboo trees called "kawatake" and "kuretake". Like the cherry and tachibana trees in front of the Shishin-den, these two bamboo trees are an essential part of the garden, and are said to have been used as markers when aligning on the garden.

Highlight 4: The Seasonal Changes in the "O-ikeniwa" 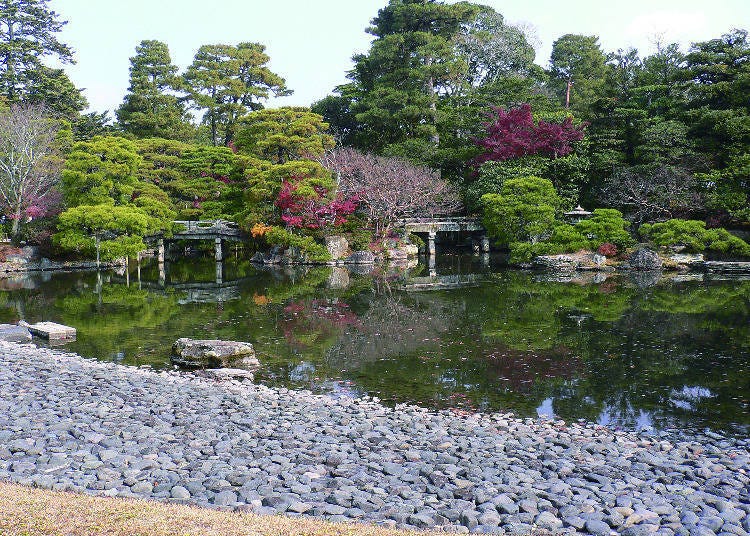 A courtyard known as "O-ikeniwa", or pond garden, can be found in the area before the imperial study and the kogosho.

The pond garden, built in the style of a garden circuit surrounding a pond, is said to have been constructed by Samurai general Maeda Gen-i and later improved upon by Kobori Enshu.

The area directly front of the pond is laid with natural pebbles, representing a beach. On the right is a bridge called "keyaki-bashi", and trees grow on the opposite shore. With wild birds and colorful fall leaves, the garden's scenery changes with each of the seasons, breathtakingly beautiful no matter what time year you visit. (Visitors are not allowed to enter the garden.) 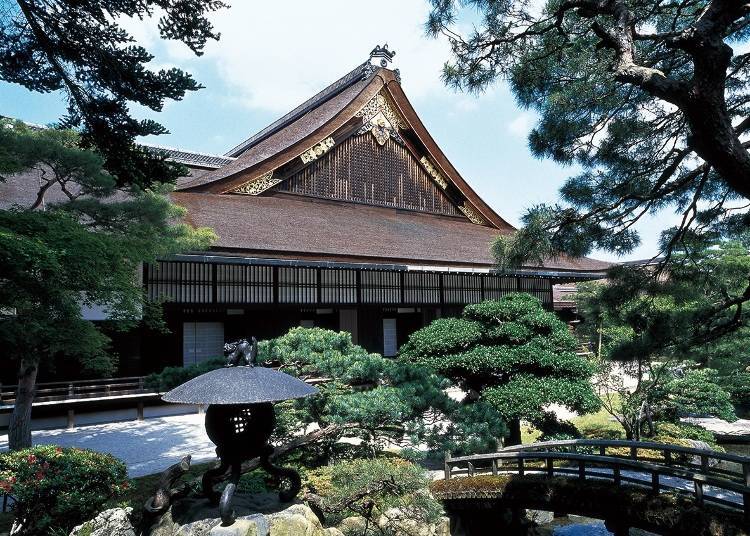 The Otsune-goten is the largest building of the Imperial Palace. After the Seiryo-den came to be used for ceremonies in the 16th century, the building was constructed as a new place for the emperor's living quarters.

The present-day version of the Otsune-goten was reconstructed in 1855, and Emperor Meiji is said to have lived there until he moved to Tokyo. To the east is the "go-naitei" garden, with a stream and earthen, stone, and wooden bridges. The majority of the bridges, lanterns, and stones that accentuate the garden were given as offerings to the emperor.

What Are Some Things to Be Careful About When Visiting the Kyoto Imperial Palace?

The Kyoto Imperial Palace is an imperial household-related facility. For security purposes, your personal belongings will be inspected at the Seisho-mon Gate. Dangerous items, large baggage such as suitcases, and pets are not permitted to be brought inside.

Smoking, eating, drinking, and art sketching are not allowed inside the palace. Photography is allowed, but drones and tripod photography are not permitted. Additionally, an alarm will sound if you get too close to the wall surrounding the palace, so take care where you walk.

The Imperial Palace is floored with gravel, so wearing comfortable walking shoes is recommended.