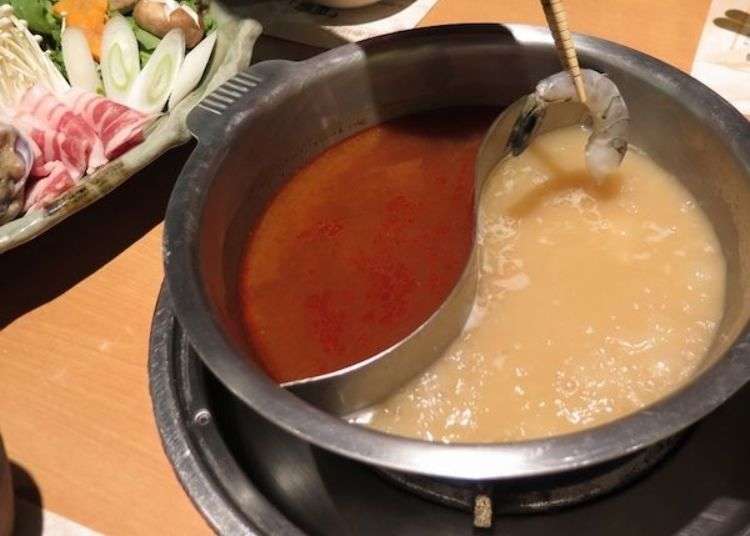 While the world is still discovering Japanese cuisine, many are becoming familiar with dishes that use sake, such as joyanabe (a kind of sake shabu-shabu) or bishonabe (hotpot flavored with sake).

The locals in Nada in Kobe (myself included) tend to think that it doesn’t really matter whether you have your sake chilled or warm with something as simple as a hotpot in winter. However, having recently heard about the ponshu-nabe menu served by a sake brewery in Nada, my curiosity was aroused. I went to the brewery last December to sample it.

I went out of Uozaki station on the Hanshin Electric Railway and walked south. As I passed under the bridge over National Highway 43 there was a sign that read, Uozaki Go. I turned left here and carried on. At the end of the road was a black wooden wall and a path lined with pine trees. Then I saw an imposing gate, set beneath a tiled roof with a cedarwood ball hanging down - a sugidama the mark of sake.

Sakuramasamune is one of the oldest breweries amongst the long-established sake breweries of the Nada Gogo group of breweries. The brewery’s ancient Edo period wooden storehouse wooden collapsed in the Great Hanshin Earthquake in 1995. This gate is now all that remains of the old building. 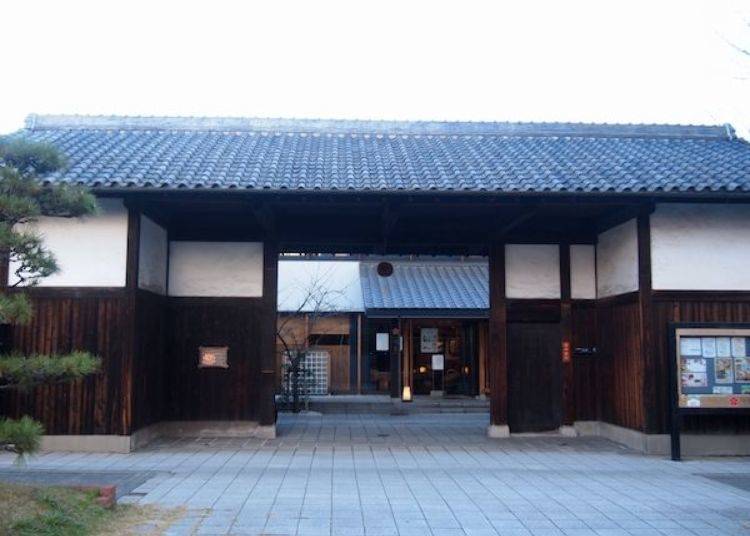 Sakuramasamune began brewing sake in Itami in Hyogo prefecture in 1625. The company was officially founded in 1717. However, its reputation doesn’t just stem from the fact that it is old and long-established. 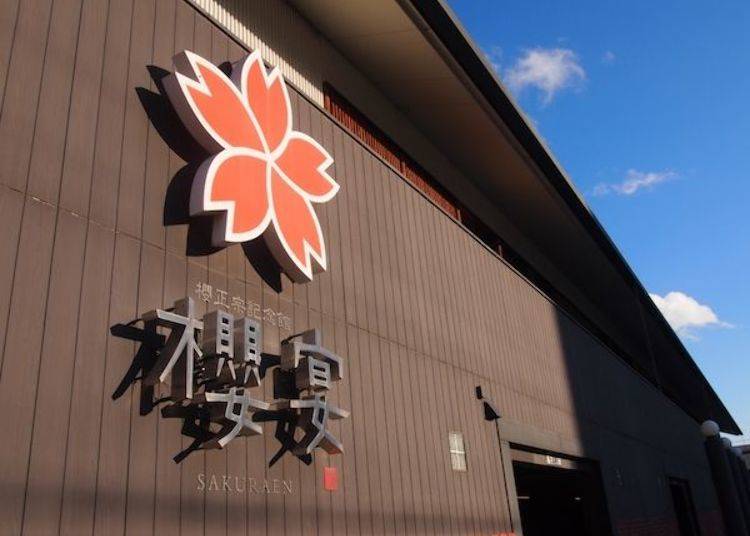 Tazaemon Yamamura, the sixth generation owner of the business, discovered Miyamizu—spring water from Mt. Rokko which wells up from underground beneath Nishinomiya. It is this water which gives Nada sake its distinct flavor.

He is also said to have invented the “Masamune” brand, which is known throughout Japan. In 1906, the brewery gained its first certification by the Brewing Society of Japan. Sake Yeast No. 1, which is used by sake brewers throughout Japan, is also a Sakuramasamune product. In other words, this prestigious brewery has made a huge contribution to the development of the Japanese sake industry.

I learn all this from the exhibition commentary and from Mr. Sho Shimoida, the manager of Sakuraen.

The characters for Masamune (“正宗”) were originally pronounced as “Seiyuu” which means “refined sake.” So the name references the fact that this is a place of refined sake. It’s an auspicious pun! However, when the company registered its tradename during the Meiji period, there were already a number of brands throughout Japan that included “Masamune” in their name. Mr. Shimoida tells me that sakura, Japan’s national flower, was therefore added to the name to make “Sakuramasamune.” 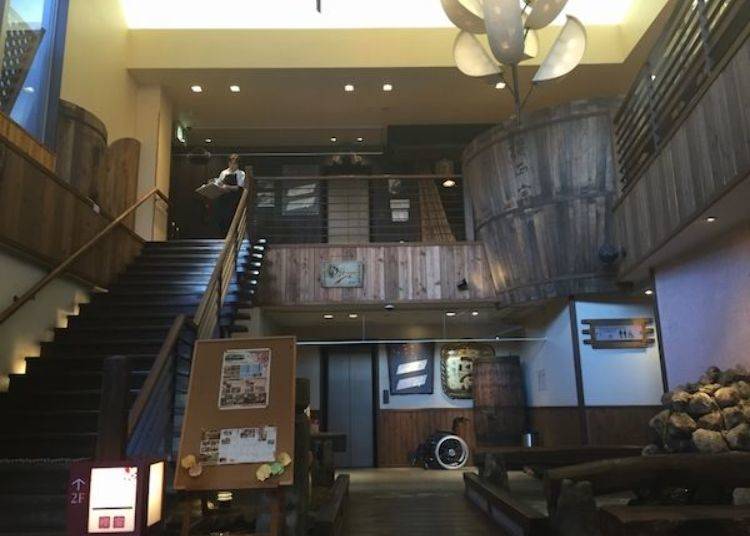 ▲The museum hall uses materials from the original Edo period brewery to create the feel and atmosphere of the original wooden building. The hall is adorned with old tools and antique pieces used for signboards or in the brewery.

Traditional brewery items, such as casks, barrels and paddles are on display, along with old bottles and signs. There are beautiful cups and drinking vessels bearing the name Sakuramasamune or pictures of cherry blossoms. There are fascinating exhibits all over the museum, bringing life to the layers of history of this long-established brewery. The structure has been rebuilt using wood materials from the original building that collapsed during the earthquake. There’s also a Japanese restaurant, a cafe and a shop, so this is a place where you can spend time and browse at your leisure. 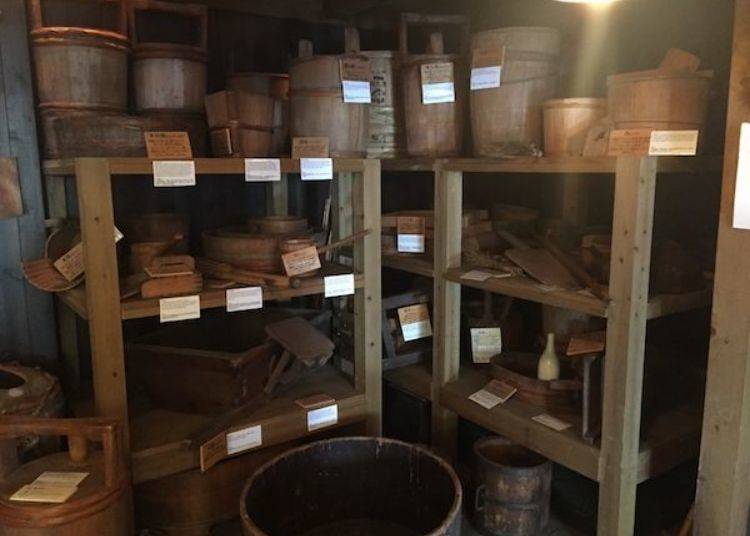 ▲Entry to the Kuramachi-dori exhibition area is free (10:00AM - 10:00PM). Watch videos or create your own original labels using photos taken on the spot (fees apply). 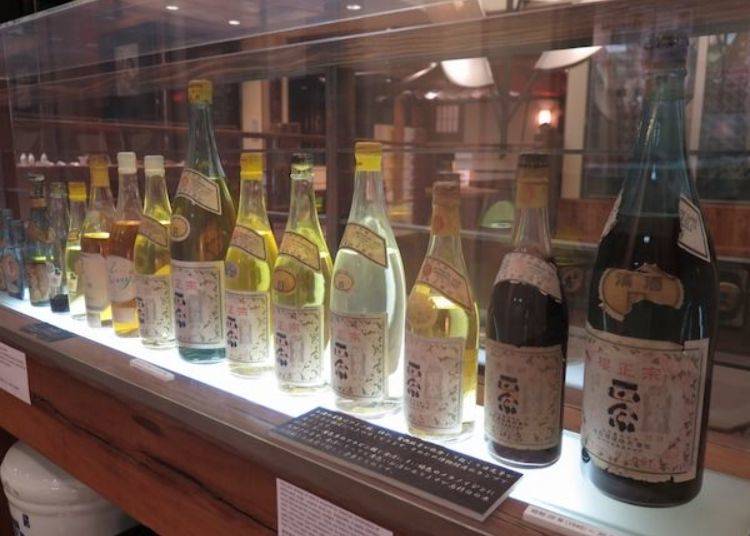 ▲There are sake bottles are on display which have been preserved since the Second World War or which survived the Great Hanshin-Awaji Earthquake (1 bottle = 1 sho, equivalent to 1.8 liters). The different colored bottles remain unopened, valuable witnesses to the passage of history.

“The brewery is easily accessible by public transport from Uozaki Station. Not many authentic breweries round here offer fine dining, so we get a lot tourists visiting here. In recent years, we’ve had tour parties coming here directly by bus from Kansai Airport. They eat lunch and then go for a walk round the brewery,” explains Mr. Shimoida. 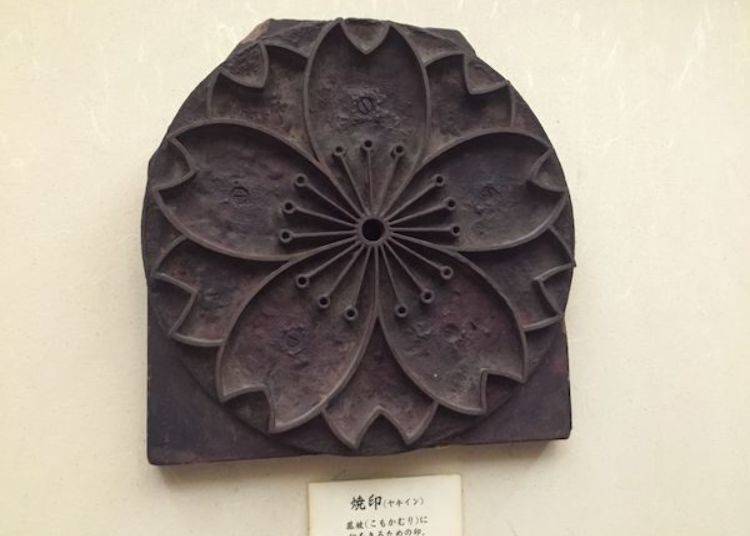 ▲ Cherry blossom flower used to brand the company’s insignia onto the straw covers on sake barrels. The sakura logo is everywhere - on bottles, signboards and advertising.

I make my way to the dining room, which is the purpose of my visit! I’m going to sample the Ponshu-nabe Tasting Menu, which is Sakuraen’s specialty meal. I can’t wait to taste it! 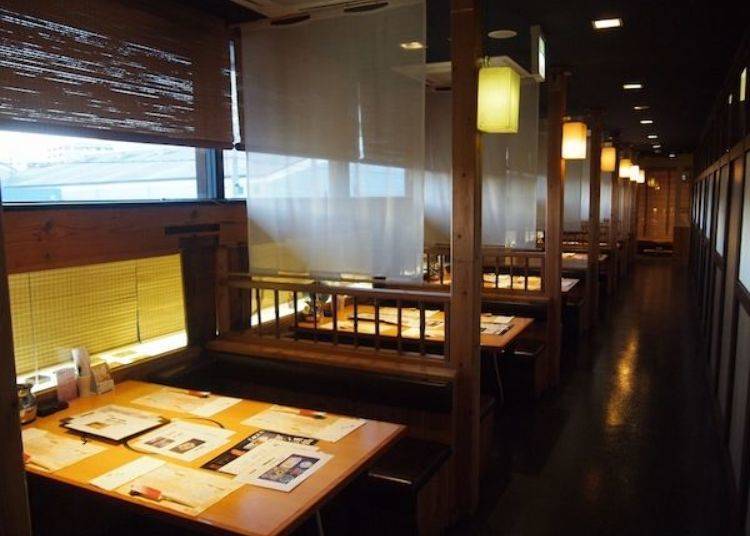 ▲Each table is partitioned so as to create a calm and relaxed atmosphere. There is a banqueting room, as well as a tatami room and a private dining room. The restaurant has 128 seats in total.

As the name suggests, ponshu-nabe is a hotpot dish made with a copious amount of sake. For the tasting menu, you choose two out five different flavors (plain, soymilk, spicy, sake lees, sesame, or chili oil.) I didn’t really know what to choose, but I went for spicy and sake lees. I like the idea of two contrasting colors and flavors in the nabe dish, and since I’m at a brewery, it surely makes sense to try the sake lees! 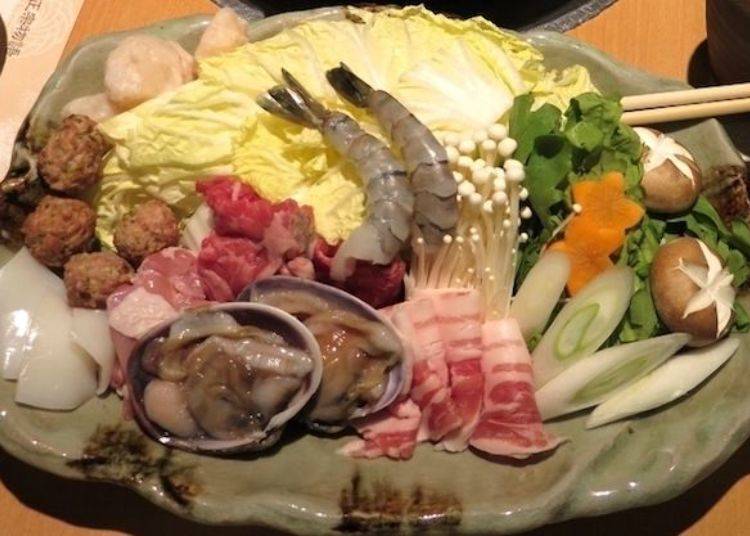 The ingredients for the hotpot are beef, pork, chicken, prawns, squid, shellfish, and plenty of vegetables, such as Chinese cabbage, white leek, and shiitake mushrooms. There is everything I need to make a really luxurious soup!

You can switch the vegetables as you wish to other options such as lettuce, watercress or Chinese water spinach. You can also choose various sakes to go with your meal, including the brewery’s very own unprocessed sake (sold by volume).

The Junmai Ginjo comes straight from the warehouse directly opposite the restaurant. The fresh taste of unpasteurized sake is very appealing. 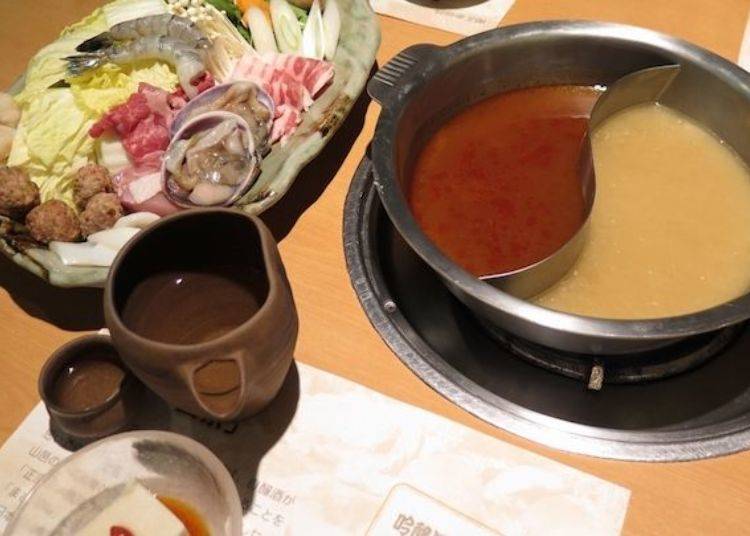 ▲Delicious ponshu-nabe ingredients neatly presented (2,667 per person). Minimum two people. For an extra charge, you can add more meat, fish or vegetable ingredients to the 13 ingredients that come with your meal.

I start with the sake lees soup. It’s not thick and rich like a country style sake lees soup, but quite thin, adding a delicate and pleasant sake aroma to the meat and vegetables.

The alcohol is burned off by the heat, so I don't need to worry about any after effects from eating this. The food cooks quickly and is so easy to eat. The soup goes well with any ingredients, but the shellfish, squid and shiitake mushroom taste especially good with it. 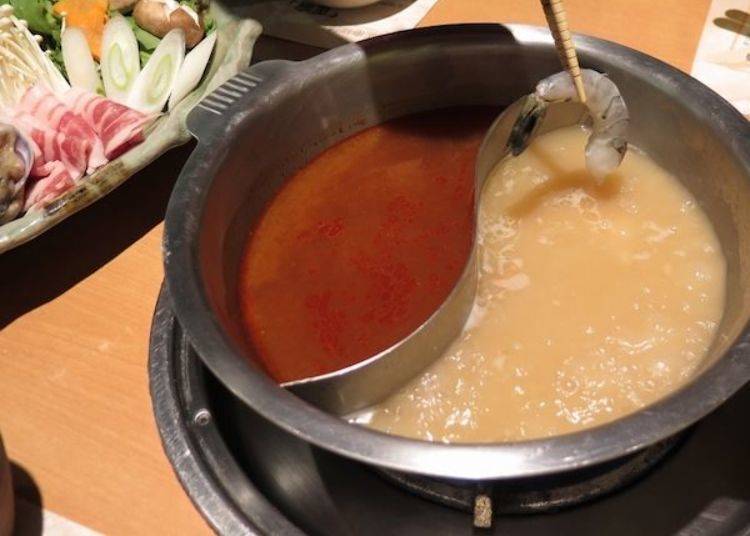 The spicy soup is a great match for any meat or for the white leeks and Chinese cabbage. The spiciness is more subtle than you’d expect.

Just as when you want to try some shochu or chuhai when you’re eating Korean hotpot, with this dish, I wanted to drink sake. It just felt like the perfect accompaniment. The full-bodied soup base is rich in flavor, so the food and the sake match each other well. 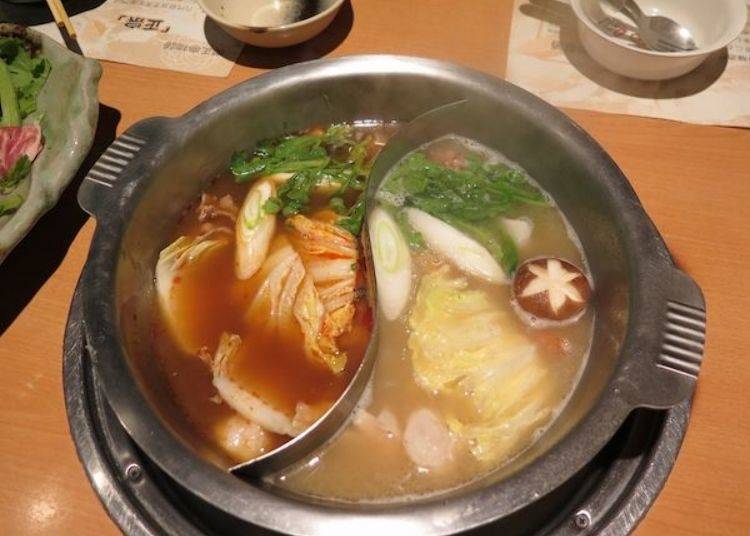 “The soup base is flavored with sardine bouillon or chicken bones. For the liquid, we use a mixture half water half sake. The sake imparts a pleasant flavor and helps soften the meat. We add ingredients such as sake lees or red chili miso to the soup base to vary the flavors,” says Tetsu Takahashi, who first came up with the idea for ponshu-nabe.

When Sakuraen was refurbished around five years ago, we tried various dishes incorporating sake. At the concept phase, we had a whole variety of different soups, but I whittled these down to five different types. So this is what we’ve come up with as a hotpot dish for sake. 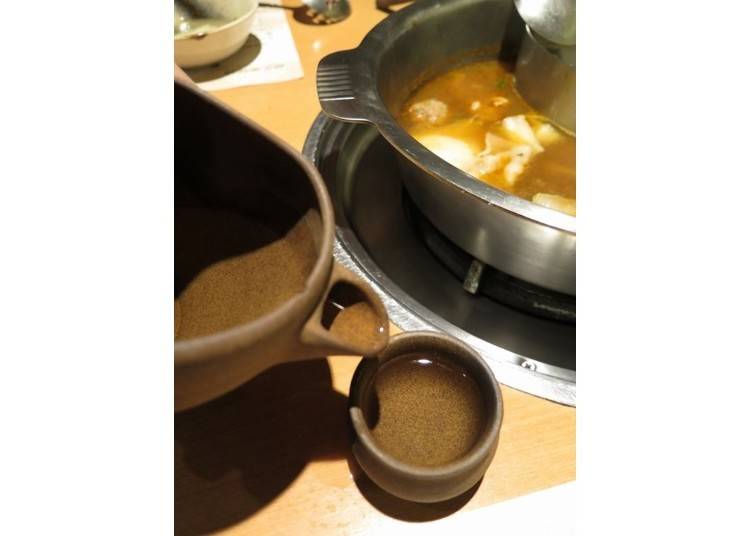 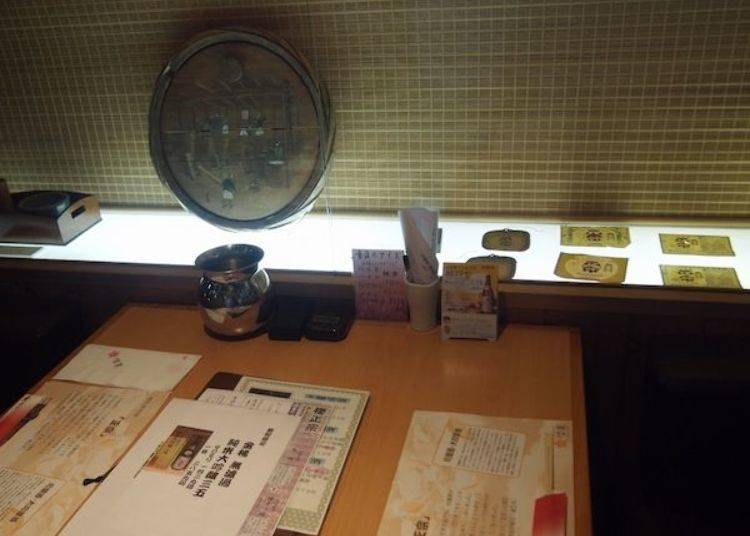 ▲On each table there are barrel lids with pictures or labels from old sake bottles, giving you a sense of the history of this brewery.

At the end of the meal you can choose either rice porridge, udon noodles or Chinese noodles to eat with the leftover soup. I chose rice porridge, which is a standard accompaniment. Incidentally, the most popular soup combination is plain and spicy.

“If there’s a group of you, you can choose different flavors for each table and try all the different ingredients with a little bit of each soup,” says Mr. Shimoida.

I see what he means. I want to try all the different combinations just to see what each one is like. Ponshu-nabe is served all year round so I’ll be back here soon. 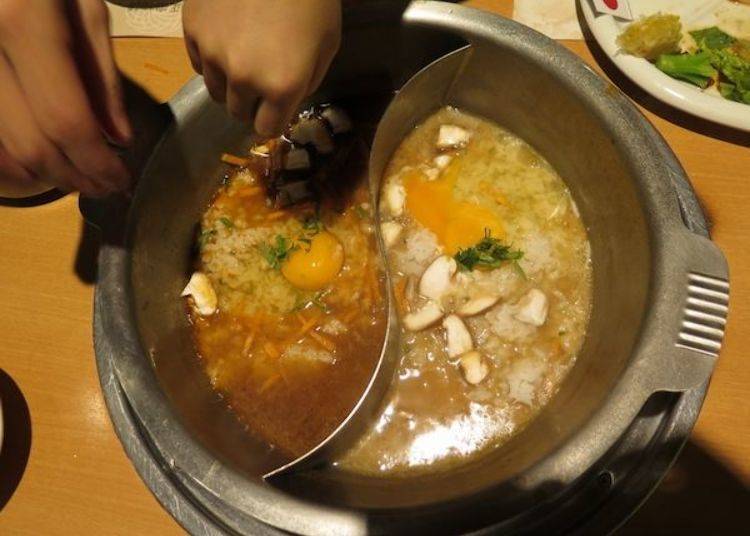 ▲Rice porridge at the end of the meal with soup which has now taken on the flavors of all the different ingredients. I want to try udon or Chinese noodles for my next visit.

I live in Nishigo near Nada Goro, so this is definitely somewhere I’ll come back to. It’s easy to get here on the Hanshin Electric Railway whether you live locally or come from far away.

*All prices exclude tax. (A service charge applies for all food and drink after 5:00PM).

Enjoy a Sake Brewery Tour in Kobe
*This information is from the time of this article's publication.
*Prices and options mentioned are subject to change.
*Unless stated otherwise, all prices include tax.