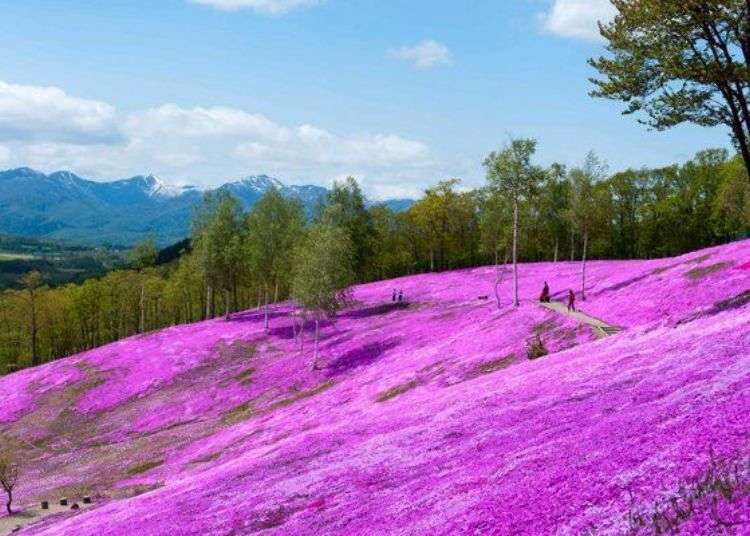 Hokkaido Scenery: Japan Has an Incredible 200km ‘Flower Road’ - Where Spring Bursts Into a Floor of Pink

Spring comes late to Hokkaido, not arriving until the snows begin to melt in May. That is when flowers begin to make their appearance in the Okhotsk region in the eastern part of Hokkaido.

The best way to enjoy this season is to visit the many famous flower-viewing spots located along the Hanakaiyu, the so-called Flower Road that extends for about 200 kilometers in the Okhotsk region.

In this article, we will introduce places that are especially interesting to visit in spring as well as events in the region held at that time.

There are roughly ten large and small famous fields of flowers scattered along the 200-kilometer Flower Road route. 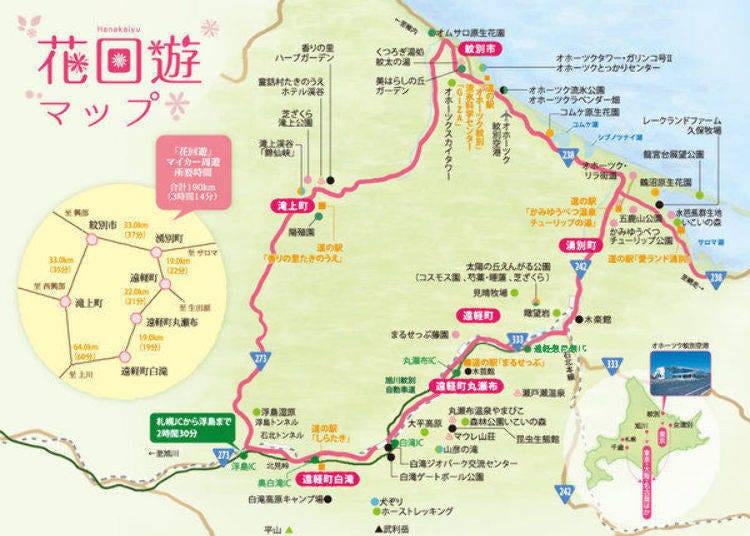 The types of flowers you can see vary with the seasons: moss phlox and tulips in the spring, lavender and lilies in the summer, and cosmos and coral grass in the fall.

In this article, we will introduce places along the Hanakaiyu Flower Road where you can get the best views of flowers blooming between May and June.

Starting from the Asahikawa Monbetsu Expressway, Ukishima IC, located about 80 minutes by car from Asahikawa City, we will guide you on a leisurely flower-viewing excursion while enjoying a leisurely drive going in a clockwise direction. 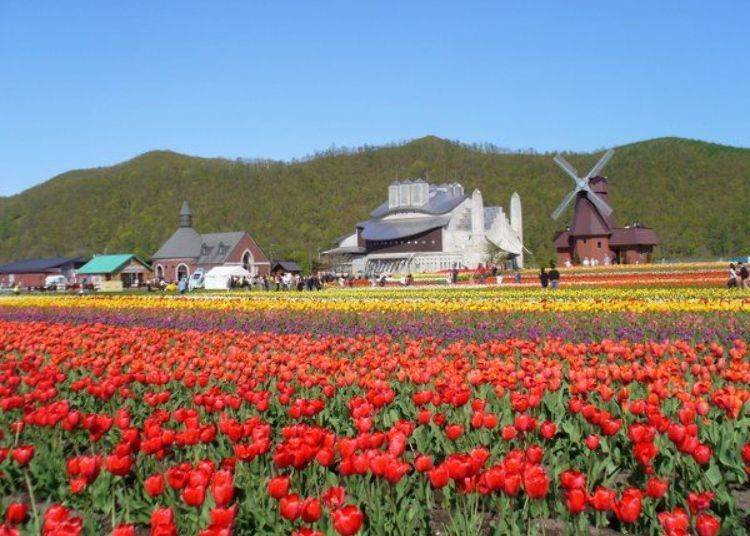 There are many excellent spots along this route affording magnificent views of flowers! (Photo courtesy of Yubetsu Town Tourism Association)

The first spot we will visit on this route is Takinoue Town which is about a 45-minute drive north on Route 273 from the Ukishima IC.

In an average year broad fields of moss phlox bloom between early May and early June in the Shibazakura Takinoue Park which is in the town area. This park covers an area of about 10 hectares (25 acres). The scale of the moss phlox here is unrivaled in Japan. 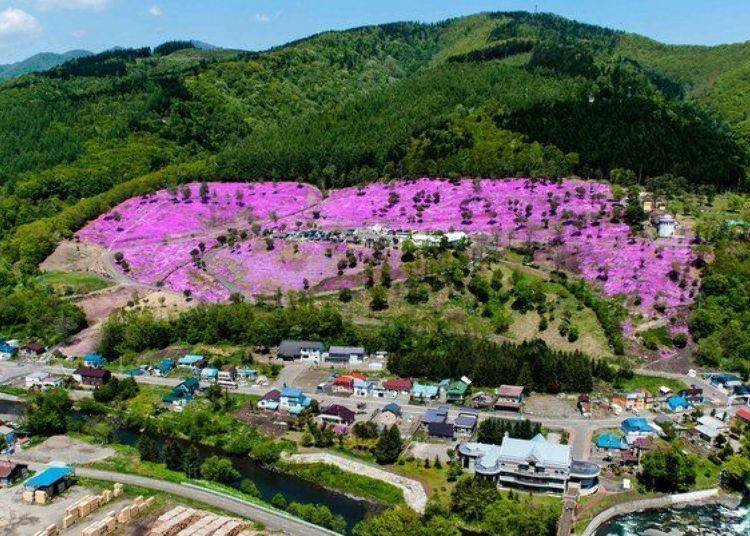 Moss phlox covers the entire park. When the blossoms are at their peak the town is enveloped in their fragrance (photo courtesy of Takinoue Town Tourism Association)

This spectacular view can trace its beginning back to 1957 when a single orange crate of moss phlox seedlings was planted which then continued to grow and proliferate in the more than sixty years since. Those who visit are especially moved by the tireless efforts and loving care provided by local residents. 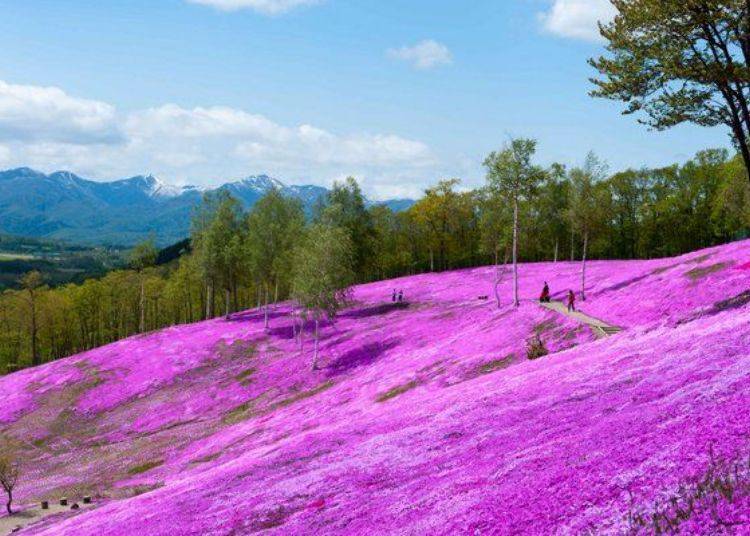 Moss phlox beneath the bright blue sky in a verdant setting. Enjoying the pleasant spring weather of Hokkaido is most refreshing (photo courtesy of Takinoue Town Tourism Association)

The Shibazakura Festival is held every year when the moss phlox is in full bloom (May 5 to June 9, 2019) which includes stage events primarily on Saturdays, Sundays, and holidays.

Helicopter tours are also possible between May 18th and 26th (5,000 yen for adults, 4,000 yen for children between the ages of 3 and 12; tax included in both). For more information contact the sponsoring airline HKK Hokkaido Airlines in advance to confirm availability. The view of the pink scenery from above is unforgettable. 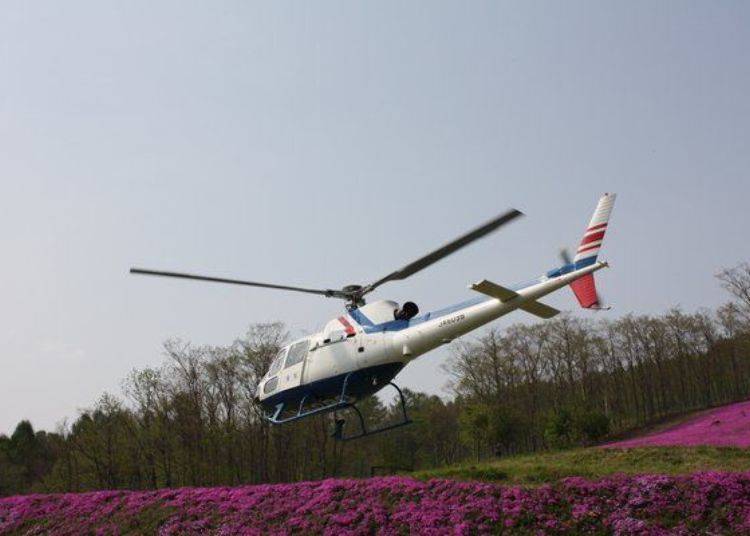 The flight time is approximately 3 minutes. This is a pleasant extra excursion aside from the drive. (Photo courtesy of Takinoue Town Tourism Association)

After about a 70-minute drive from Takinoue along the Okhotsk coastline, you will arrive at Yubetsu Town. The highlight of this area is Kamiyubetsu Tulip Park.

There are more than 200 varieties of tulip imported from Holland on this vast 70,000-square-meter (17 acre) site. There is an observation deck that looks like a windmill in the center of the park from which you can get an excellent view of the park's interior. 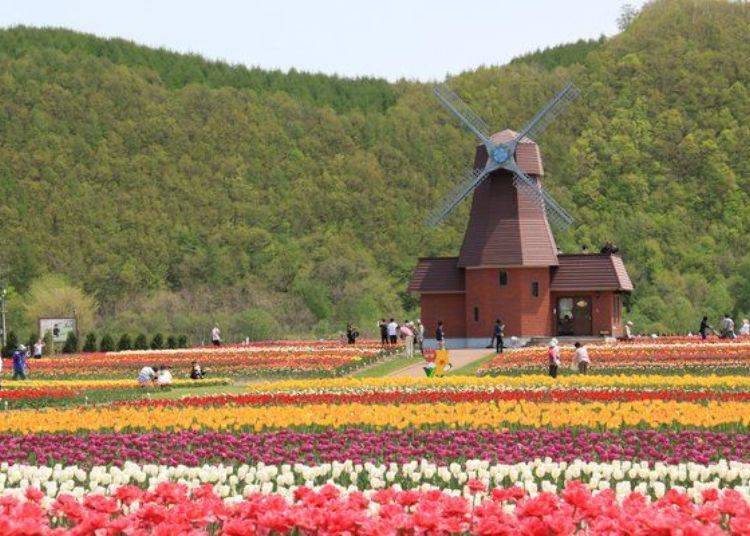 A broad field of tulips and a windmill. It’s just like being in Holland (photo courtesy of Yubetsu Town Tourism Association)

Cultivation of tulips started as a specialty product in the mid-1950s in Yubetsu Town and although at one time it had the greatest production and export volume in Hokkaido, production declined due to a fall in transaction prices. However, due to the fervent wishes of the townspeople to “leave tulips for later generations”, the town created this park which opened in 1987. 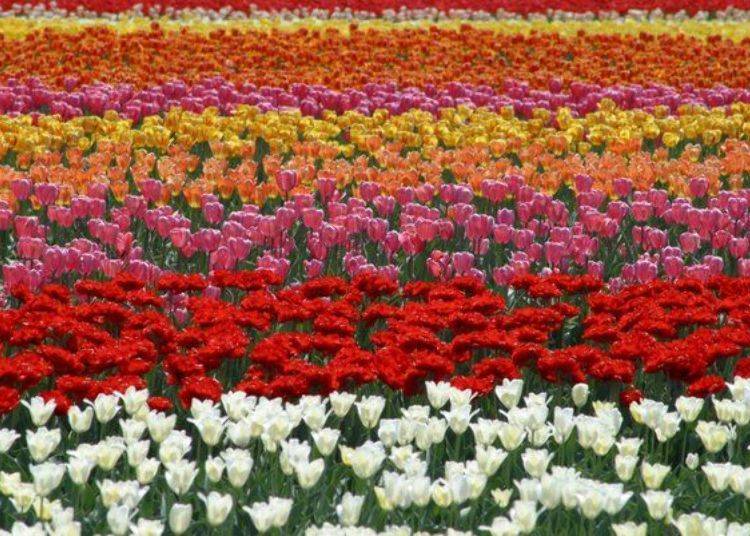 This mystical and colorful creation is a testament to the affection of the local people. (photo courtesy of Yubetsu Town Tourism Association)

Every year a Tulip Fair is held between May and June to coincide with the flowers when they are fully in bloom. During this period, you can dig out the bulbs you like from a corner of the garden and buy them (100 yen per bulb including tax), or tour the garden on the Tuppit excursion bus (300 yen for adults, 100 yen for elementary and junior high school students; tax included in both prices).

There are also many spots for taking pictures throughout the park, such as in front of the mini observatory and in the huge wooden shoe. 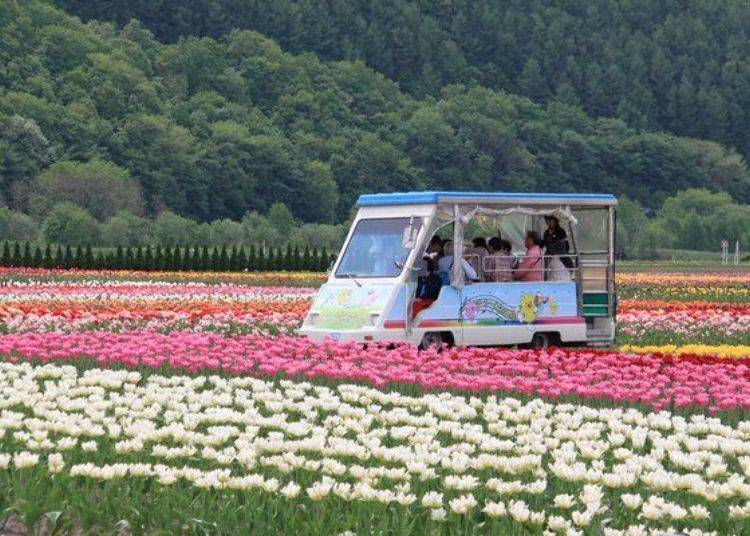 The electric bus Tuppit. A tour guide is on board to point out the attractions of the park on a tour that lasts about 12 minutes. 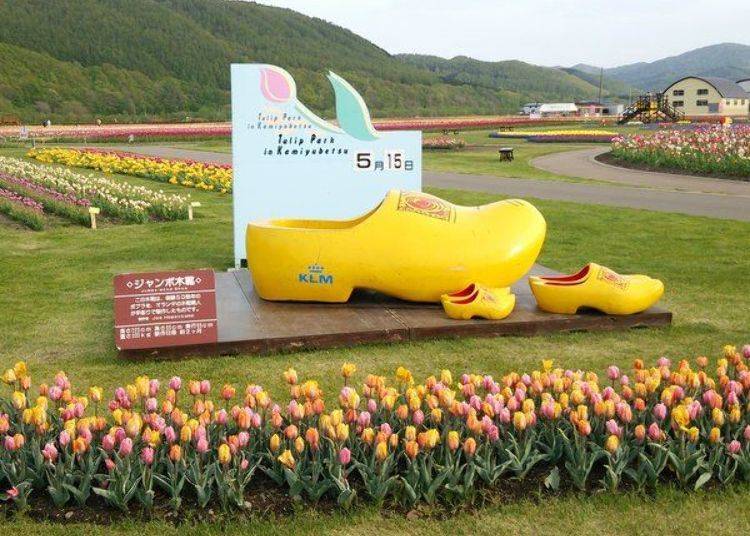 The giant wooden shoe is an especially good photo spot. The clog was made by a craftsman in Holland and having your photo taken in it is perfect for posting on Instagram! (Photo courtesy of Yubetsu Town Tourism Association)

Taiyo-no-Oka Engaru Park is located on the outskirts of neighboring Engaru Town which is 20 minutes away from Yubetsu Town. Here every year from the middle of May to the beginning of June moss phlox, tulips, and azaleas all bloom in a profusion of color at the same time. 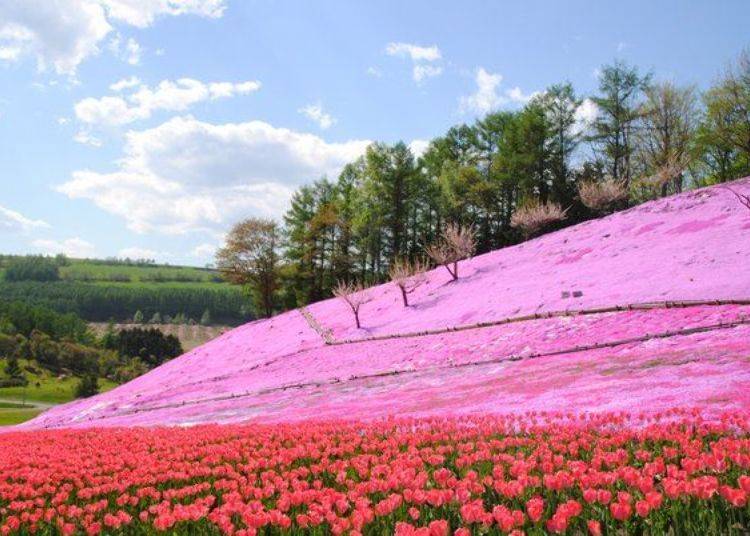 The pink of the moss phlox contrasts vividly with the red tulips! Spring marks the end of the harsh winter of the north and its arrival is heralded by these colorful flowers (photo courtesy of Engaru Town Tourism Association) 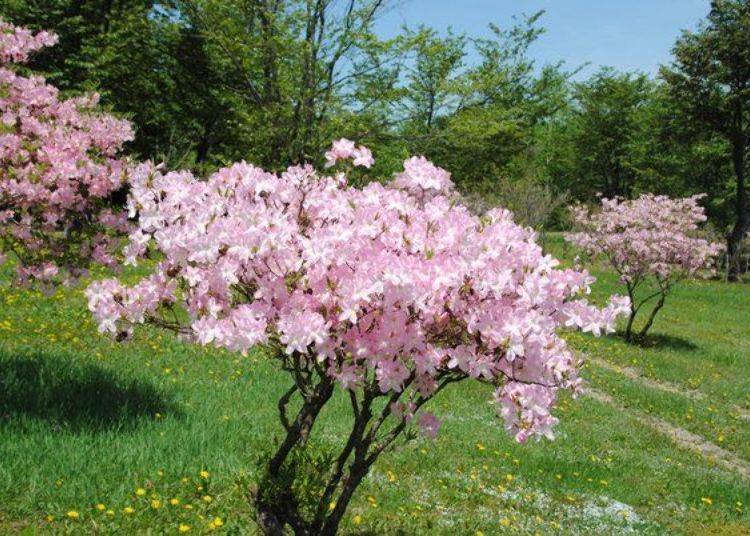 All types of colorful azaleas mark the arrival of spring beginning with the Royal Azalea (photo) with its large, pink blossoms, as well as Rhododendron Yedoense and Japanese Azalea. (Photo courtesy of Engaru Town Tourism Association)

Not only spring flowers, but many other kinds that bloom every year between the middle of August and end of September, such as cosmos, also explode in a riot of colors drawing visitors to the park then, too. The scale is unrivaled in Japan with more than 10 million plants carpeting the 10 hectares (25 acres)! All of the famous flower places in Okhotsk are on a grand scale. 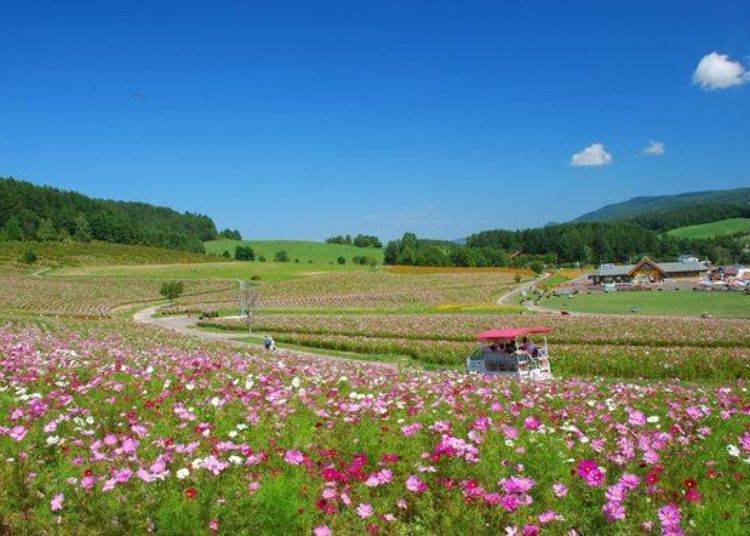 The pretty cosmos that proliferate throughout the park in autumn make this the most popular spot during the autumn Hanakaiyu Flower Road. For a truly relaxing moment, be sure to spend time here in the embrace of these many soothing flowers. (Photo courtesy of Engaru Town Tourism Association)

This is a flower spot you can visit not only in spring but at other times, too, to see peonies (late June to early July) and zinnias (early August to late September).

Our final destination is the Maruseppu Fujien located about thirty minutes outside of Engaru Town. Between early and late June extending for about one kilometer from Heiwayama Park to the precincts of Koseiji Temple the soft lavender and pink colors of about 200 wisteria trees in bloom are a spectacular sight. 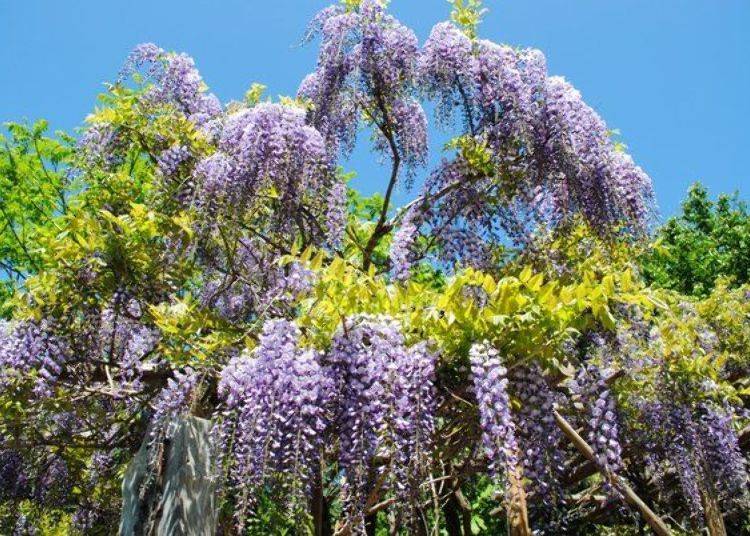 Fujien [Wisteria Garden] traces its beginning back to 1945 when the head priest of Koseiji Temple planted a single tree. Since then their number has steadily increased through grafting and by obtaining trees from Kyoto. As a result of those efforts Fujien has become renowned for its beauty and is a place visited by many. 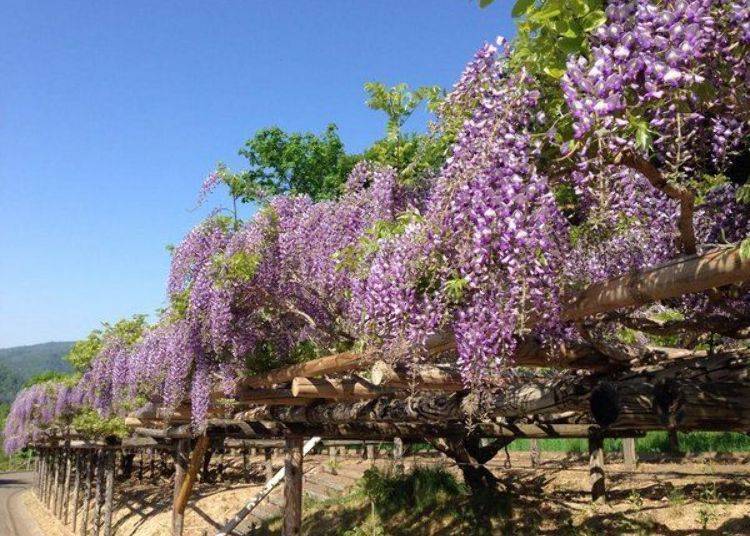 Every year at the Fuji [Wisteria] Festival, which is held in early June, many visitors flock to attend such events as stage shows and enjoying the tea ceremony beneath the wisteria. Why not come and experience it yourself?

Beyond Flower Road: There are many things to see on a drive through the Okhotsk region!

About 40 minutes after setting out from Maruseppu Fujien by car you will arrive back at your starting point at the Ukishima IC. A leisurely drive along the Hanakaiyu Flower Road is a great way to explore the beauty of the Okhotsk region not only in spring, but also in summer and autumn. 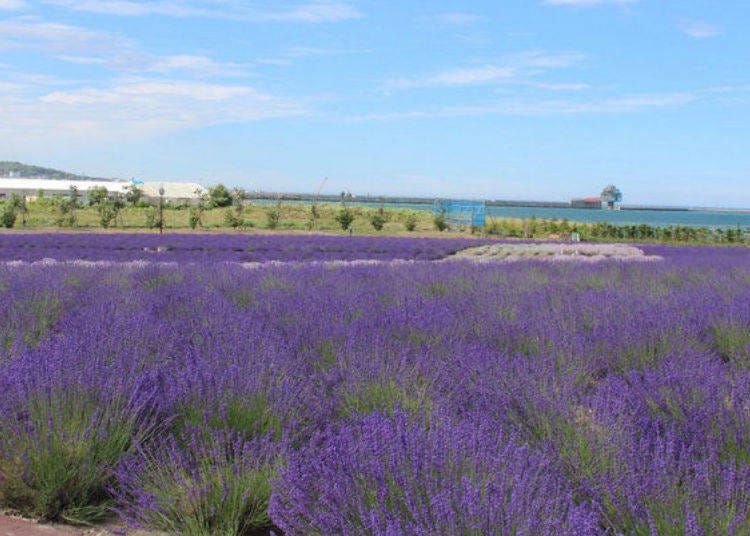 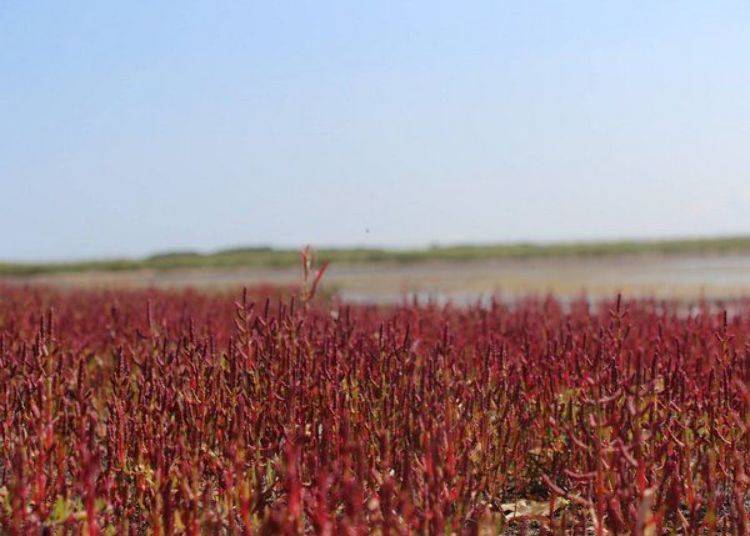 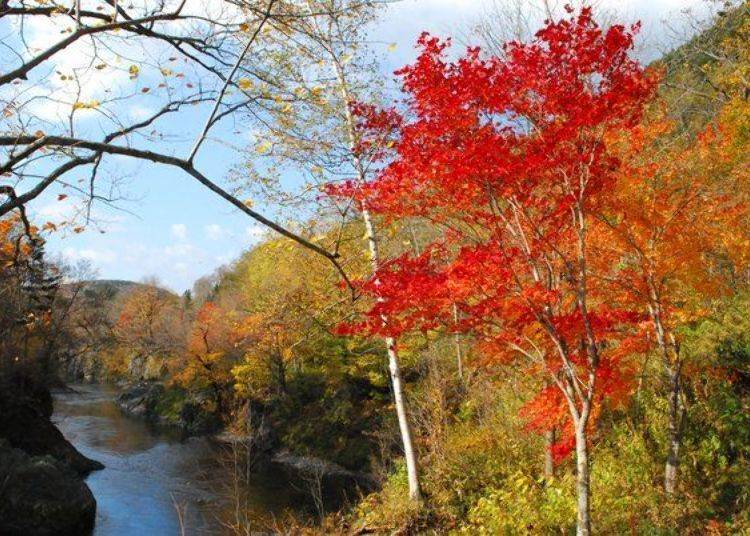 The Kinsenkyo Gorge near Takinoue Town offers spectacular views throughout the year. The beauty of the autumn leaves, especially from early to late October, attracts many visitors (photo courtesy of Takinoue Town Tourism Association)

A leisurely drive along the Hanakaiyu Flower Road offers many wonderful sights, so when you visit Hokkaido and have the time, we definitely recommend it! Travel distance is about 200 km and can be done in about three hours.

Along the way, there are the places we introduced where you can view beautiful flowers as well as rest areas and hot spring inns eager to welcome you! If time permits you might even plan your drive to include spending a night or two along the way.

* This article contains revisions of a 2018 article.
* Events and their contents may vary according to the condition of the flowers.
* Please telephone each tourism association for more details.