HOME Hokkaido Hokkaido Sapporo / Chitose Rugby World Cup 2019 in Hokkaido: How to get to Sapporo Dome and sightseeing spots nearby! 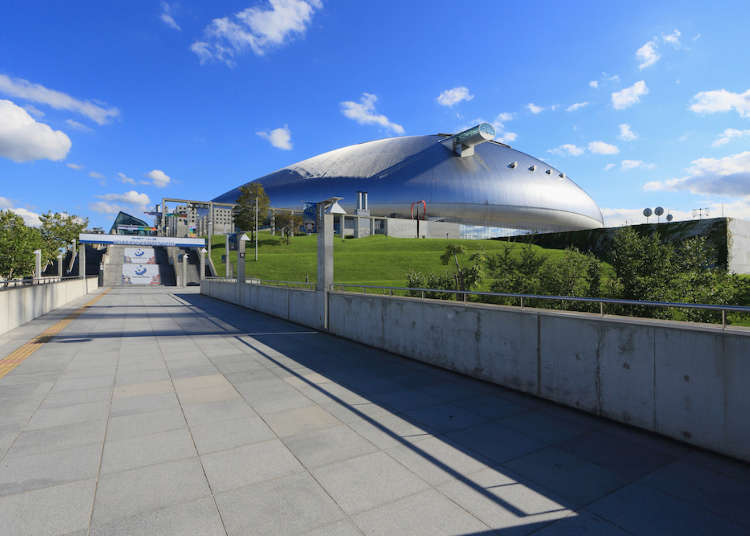 Rugby World Cup 2019 in Hokkaido: How to get to Sapporo Dome and sightseeing spots nearby!

The 2019 Rugby World Cup will soon be held. Sapporo was also selected as one of the host cities, with Australia playing Fiji on September 21st and England going up against Tonga on the 22nd in Sapporo Dome. Did you know that among the venues, this Sapporo Dome has some unique features? In this article, we will tell you how to get to the Sapporo Dome and about sightseeing spots you might like to visit in addition to watching a game. 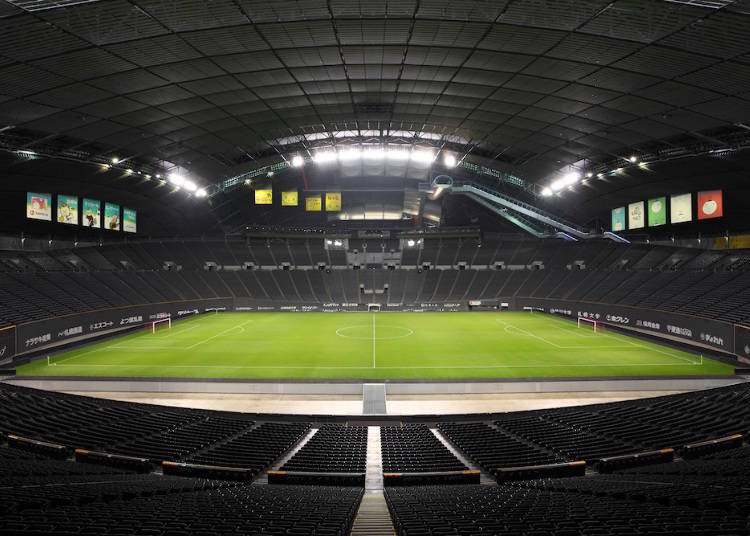 Sapporo Dome, one of the 12 venues across the country for the Rugby World Cup, is the only one having a major feature the others don’t. That is it is completely covered. Despite being entirely covered it nevertheless has natural turf.

What makes it possible is the Hovering Soccer Stage, which was a world first. From its inception it was designed to be able to accommodate both baseball and soccer games having a natural turf stage 120 meters in length, 85 meters in width, and weighing 8,300 tons which enables it to be moved in and out of the stadium on a cushion of air. The turf was replaced with new, bright green grass in 2018. 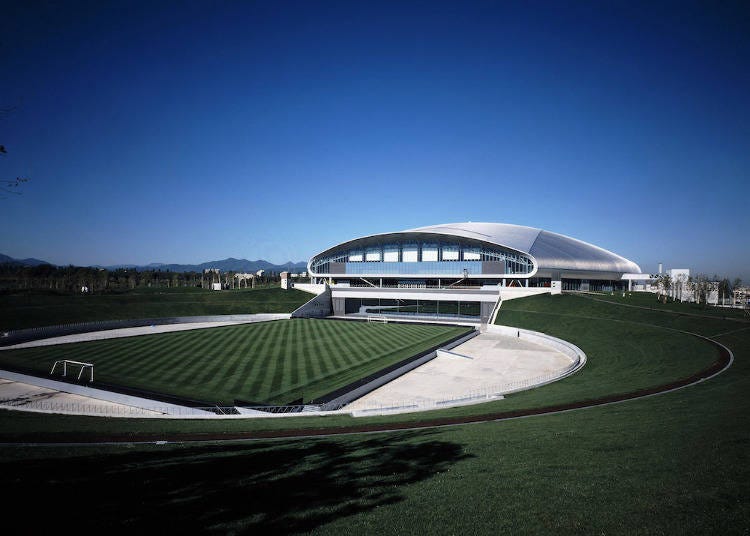 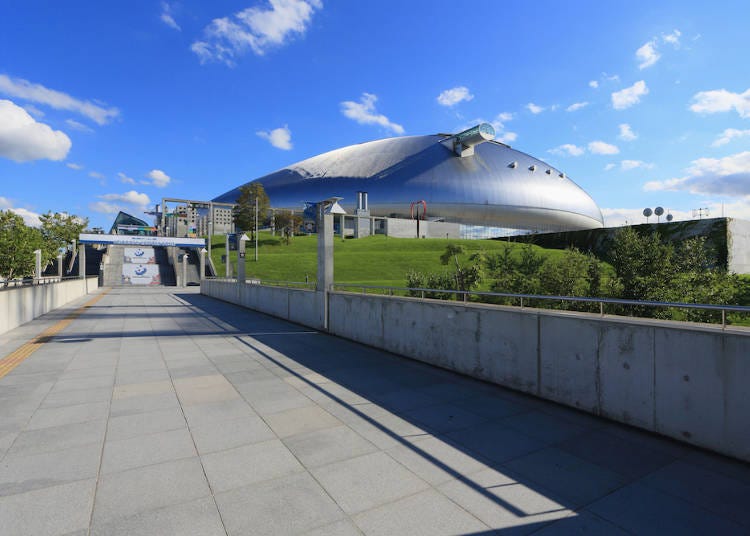 We will explain the several ways to get to the Sapporo Dome. Times mentioned are at best estimates because on the days of events traffic is extremely congested. It is probably best to arrive early because it will take some time to get into the stadium.

The most basic way to arrive is by subway. Take a train in the direction of Fukuzumi on the Toho Line and get off at Fukuzumi Station, the end of the line, which takes about 15 minutes from Sapporo Station. Exit from Exit No. 3 which is directly connected to the Fukuzumi Bus Terminal, and follow Route 36 going in the direction of Kitahiroshima and Chitose; you will arrive after about a 10-minute walk. 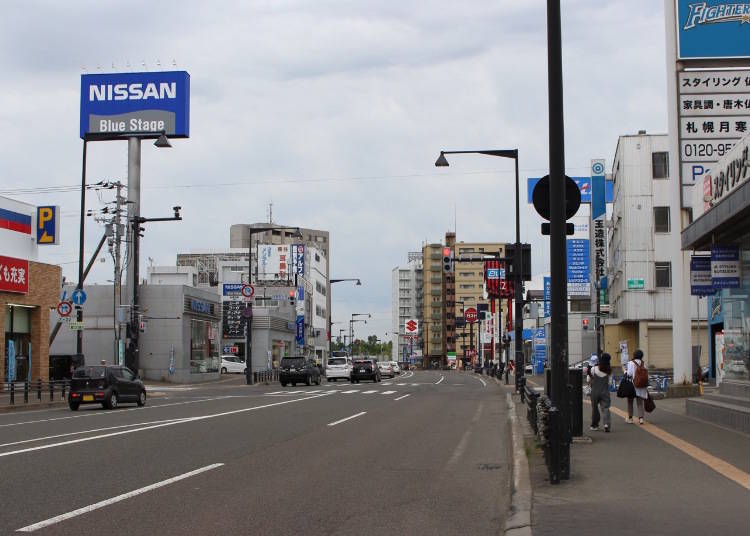 The direction to Kitahiroshima and Chitose is to the right after going out Exit No. 3. You can see the greenery on the grounds of Sapporo Dome in the distance so go in that direction. 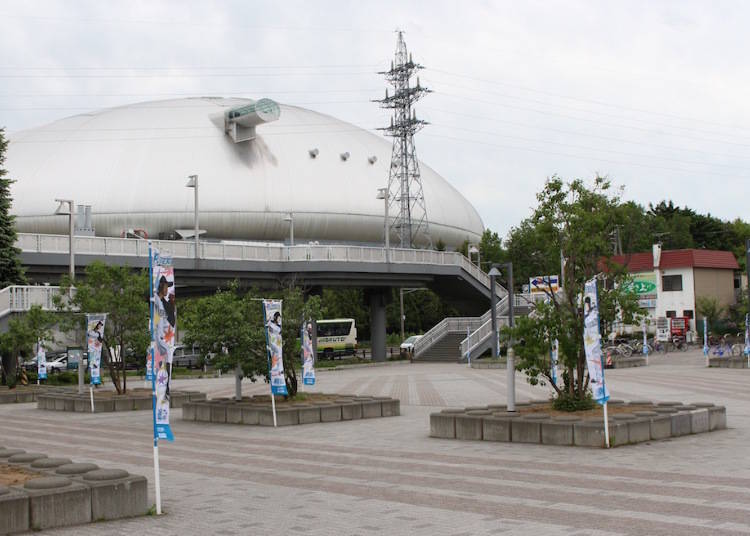 If you cross the footbridge from the dome square, you will see the stairs leading to the dome. For wheelchairs and strollers, there is an elevator on the north side of the dome. Signs inside the stadium are in both English and Japanese.

The subway is extremely crowded on days when there are games. We recommend that you get a pass like a travel IC card or a one-day ticket. 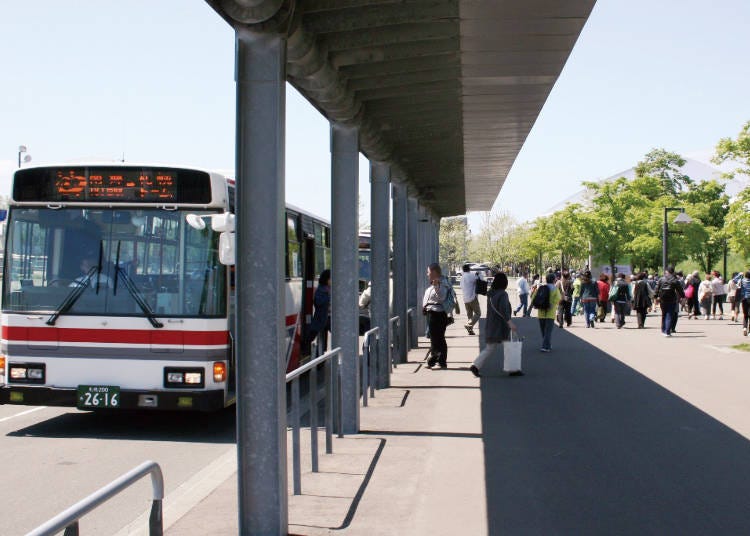 For the Rugby World Cup a shuttle bus between the city center and Sapporo Dome is anticipated. That will be very convenient as it will stop within the Dome grounds. Time schedules for the shuttle bus have not yet been decided so as the event draws near please go to the Sapporo Dome website for more details.

If you arrive in Hokkaido on the day of the match, you can get to Sapporo Dome in about 45 minutes without having to transfer by using an airport liaison bus that runs between New Chitose Airport and Sapporo City. The fare, regardless of carrier, is 1,100 yen for adults and 550 yen for elementary school aged children. Take a bus going to Sapporo City Center or one going to the Maruyama Bus Terminal. 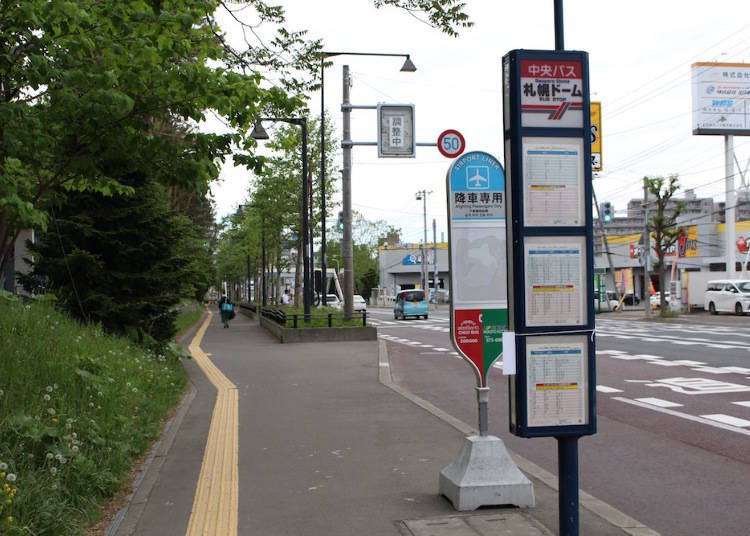 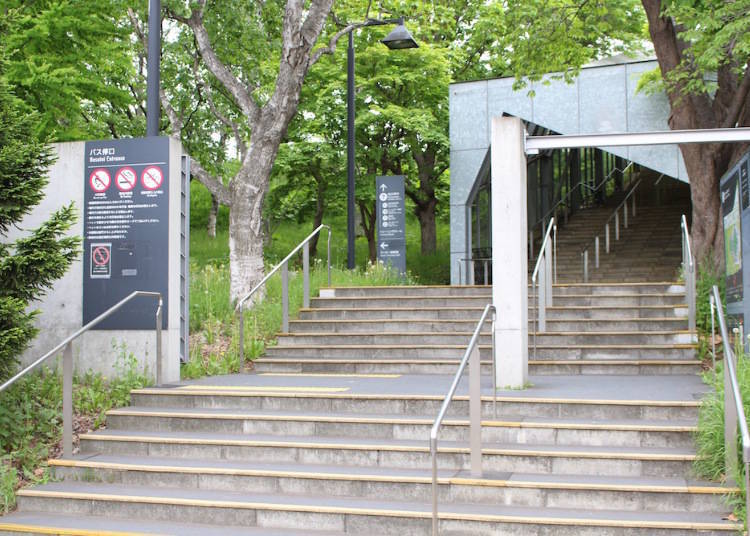 If you take the bus going to downtown Sapporo (via Fukuzumi Station), which departs approximately every 15 minutes during the day, it will stop at the Sapporo Dome bus stop located on the northeast side of the dome along Route 36. You can enter the dome site which is right next to the bus stop. 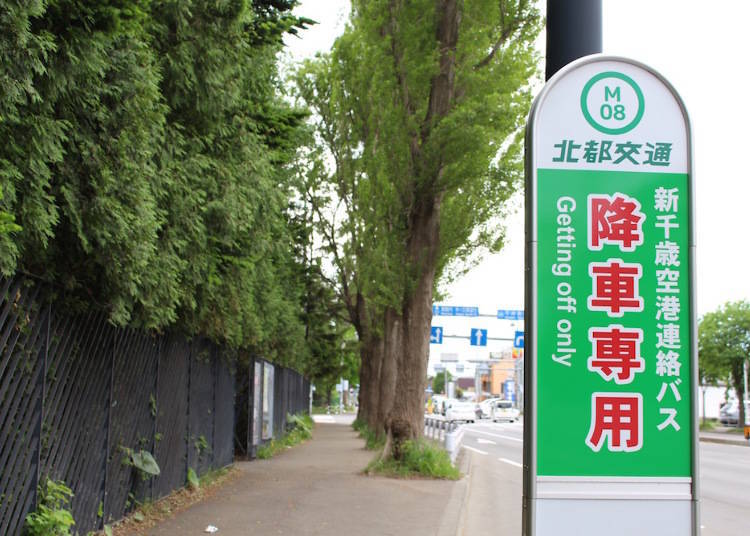 Also, on the day of a match, the parking lot of Sapporo Dome will be closed. If you plan to rent a car at the airport, then you will have to use a parking lot in the area. An area for disembarking from taxis has been set up near the south gate of the dome. We recommend taking public transportation because everywhere is expected to be extremely crowded on days there is a game. Expect a taxi ride from Odori to cost about 2,800 yen.

No dates have yet been set for games, so this would be a good time to visit some of the interesting places in the vicinity. Here are some good spots we recommend.

1. Sapporo Hitsujigaoka Observatory: overlooking the city from a hill 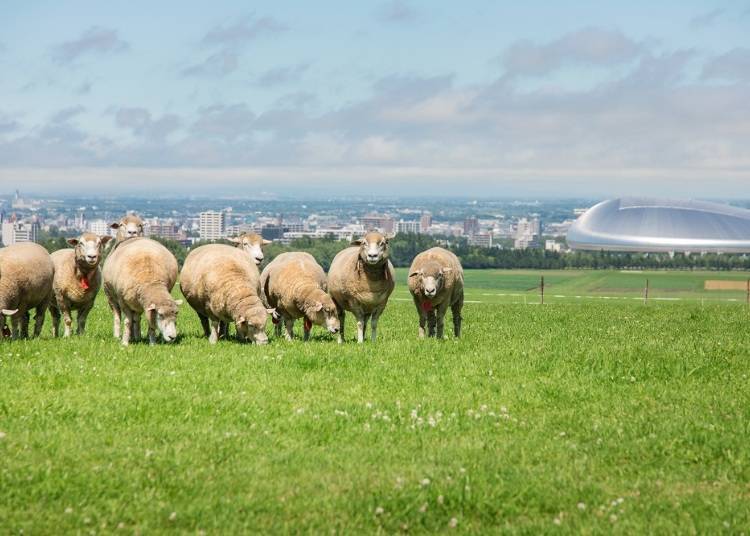 Follow the Fukuzumi-Soen-dori from the Sapporo Dome for about 3 km going southwest to the Sapporo Hitsujigaoka Observatory, which is one of Sapporo's most famous tourist attractions. As its name suggests, Hitsujigaoka [Sheep Hill] is a grassy field where sheep are left to graze, an elevated hill affording an excellent view of Sapporo. 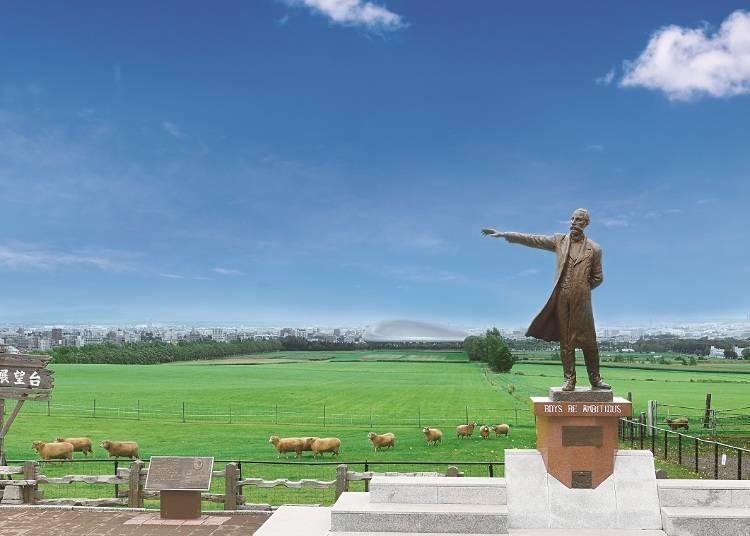 Here is an image of Dr. William S. Clark, the first teacher of Sapporo Agricultural School (now Hokkaido University). Dr. Clark is also said to be the father of Hokkaido pioneering, and is remembered for his message of "Boys, be ambitious" when he returned to the United States, one that still resonates with Japanese today. Some visitors like to imitate this pose with right arm raised and pointing for taking selfies alongside the statue. 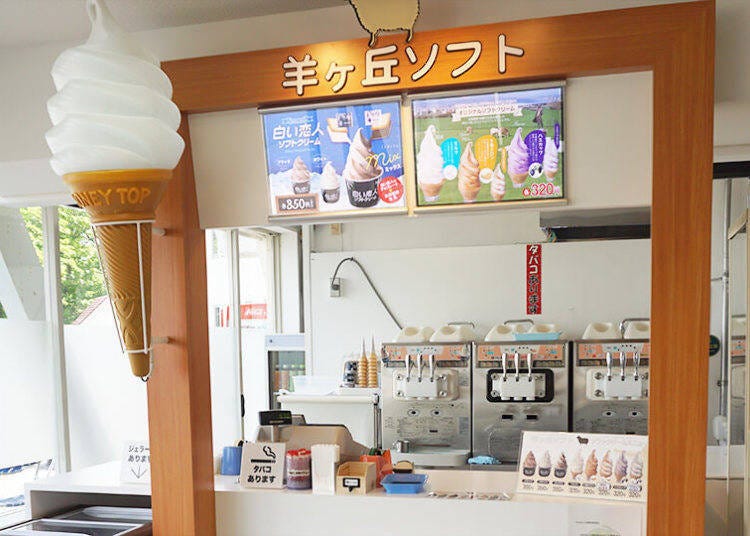 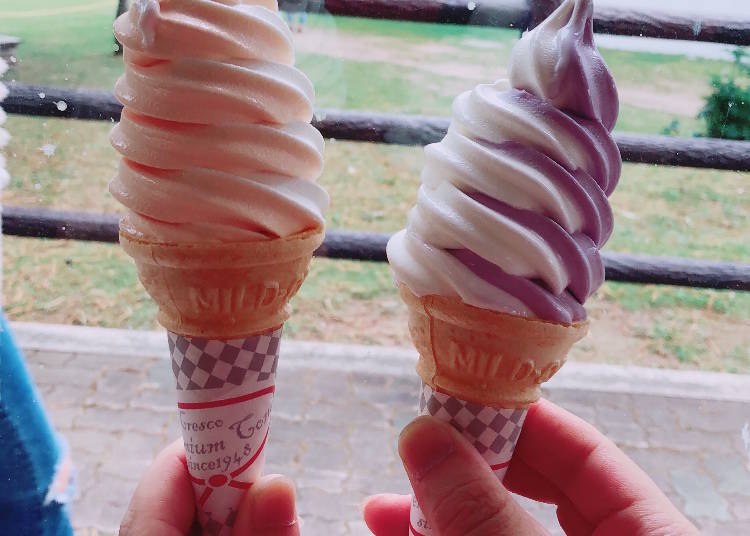 There are various places to visit on the grounds of the observation deck, so it is good to first obtain a pamphlet (English, Traditional Chinese, Simplified Chinese, Korean) before looking around.

There are several good gourmet spots. In addition to Genghis Kahn (Mongolian barbecue) rest houses, we especially recommend trying the Hitsujigaoka soft ice cream at the Austrian House in summer. The original soft ice cream (350 yen) has a rich milk flavor and there are also other flavors typical of Hokkaido such as Hokkaido melon and lavender. 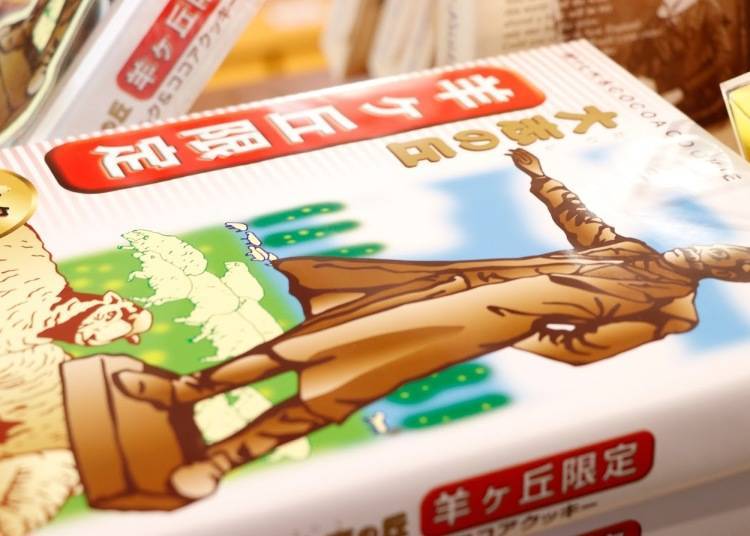 You can also buy souvenirs that can only be purchased here, such as limited-edition cookies and Dr. Clark goods, on the second floor of the Austrian House. The Sapporo Hitsujiyaki (200 yen), a take-out sweet from the Sapporo Hitsujido on the first floor, which just opened in 2018, is also becoming popular.

2. A visit to the Sapporo Snow Festival Museum will make you want to come to Sapporo in winter 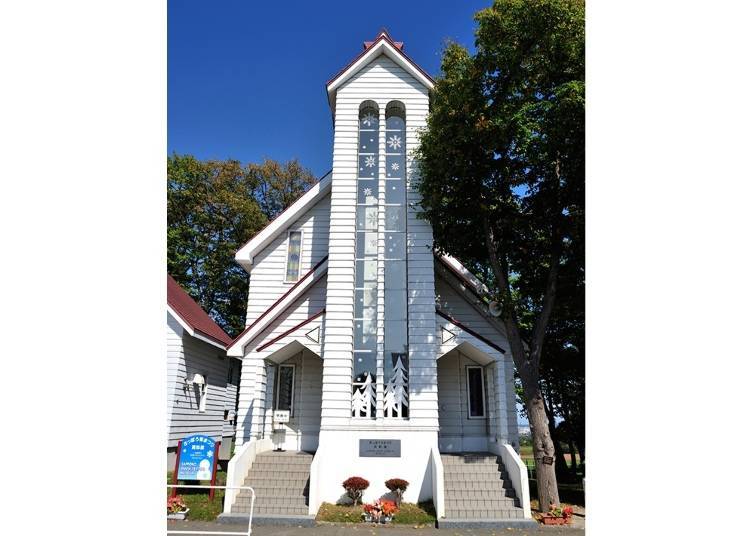 There are several facilities at the Sapporo Hitsujigaoka Observation Hill, but one that you really must see is the Sapporo Snow Festival Museum. This is a historical major event in Sapporo which for more than half a century has attracted about two million visitors from both Japan and abroad.

On the first floor are panels that show how the snow images are created, the tools used to make them, and items that have been sold each year, such as postcards, pins, and badges, are also displayed. You can also watch videos of festivals held in recent years. 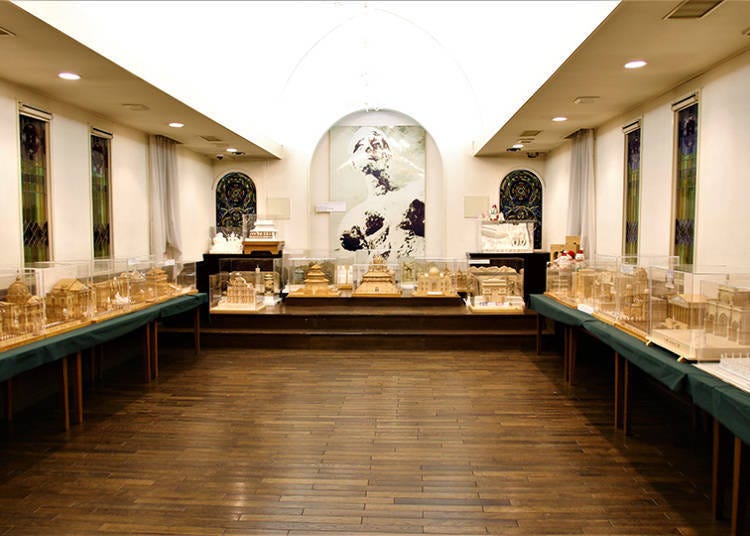 On the second floor models of the snow statues produced every year are displayed. These are all important models which cannot be found anywhere else in the world. Looking at them one cannot help but be moved by their scale when realizing that these gigantic sculptures made entirely from ice and snow sometimes exceed 10 meters in height. 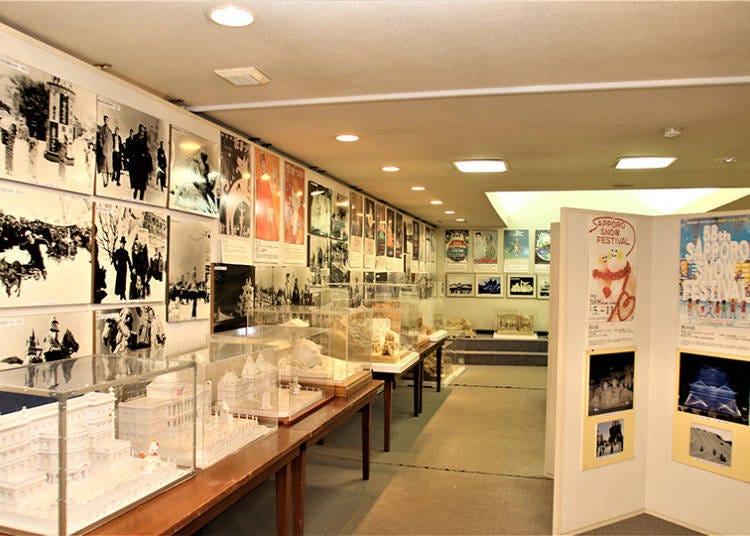 At the Snow Festival Archive Corner, photographs are displayed which show scenes of the sculptures and events and convey the vitality and excitement of past events. Looking at all these photos, one cannot help but feel a growing urge to visit the Sapporo Snow Festival the next time it occurs. 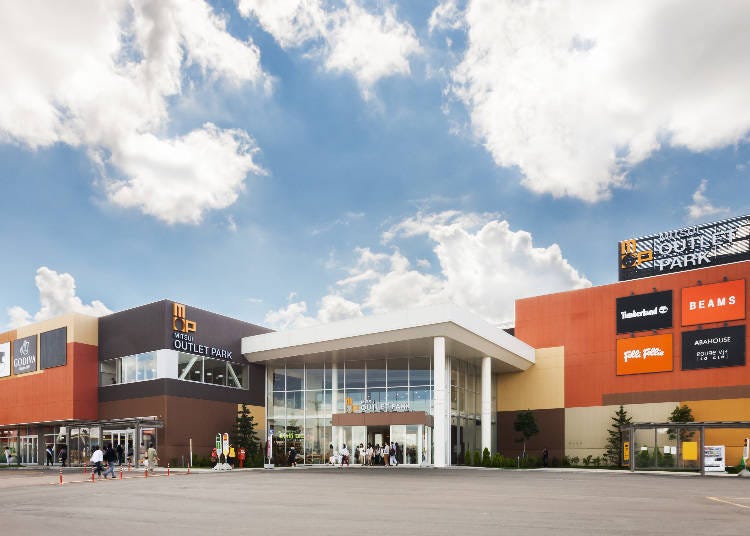 MITSUI OUTLET PARK Sapporo Kitahiroshima is a large outlet mall located in Omagari, Kitahiroshima City, right next to Sapporo City. It can be accessed by road from either Hitsujigaoka-dori or Route 36 that goes to Sapporo Dome. It can be easily accessed by bus, which takes about 20 minutes, or taxi, which takes about 15 minutes and costs about 2,500 yen.

There are about 180 stories offering everything from international luxury brands to casual brands, in addition to fashion as well as outdoor goods, dishes and household goods. This is a fun place to shop as there are many duty-free shops accepting many types of credit cards, and there are also currency exchange machines to facilitate your shopping. 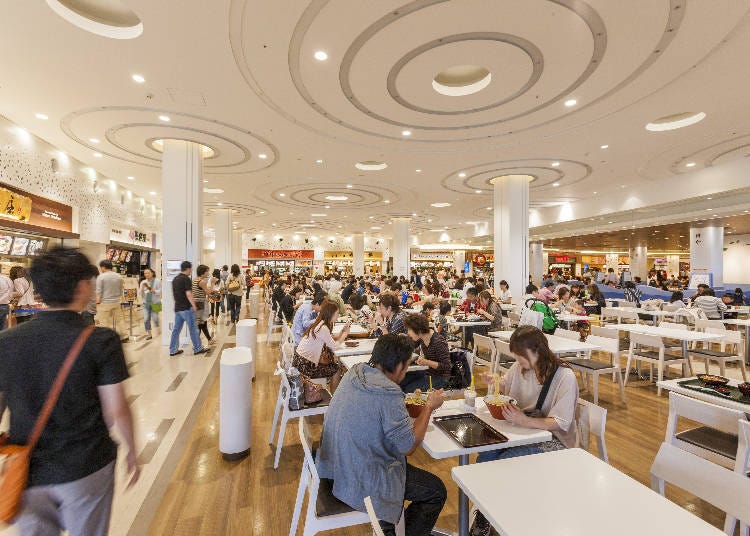 Hokkaido Loco Farm Village, located on the first floor, offers fresh vegetables and other delicious products of Hokkaido. You can enjoy freshly made sweets and freshly baked bread at the workshop as a snack while shopping.

There are also restaurants on the premises, and at the food court on the second floor you can also taste Hokkaido gourmet dishes such as ramen and pork bowls; the perfect place for having a satisfying meal. 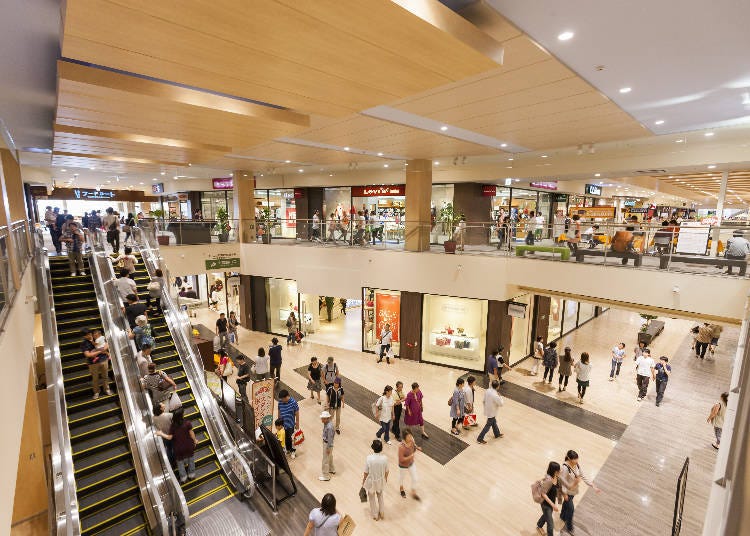