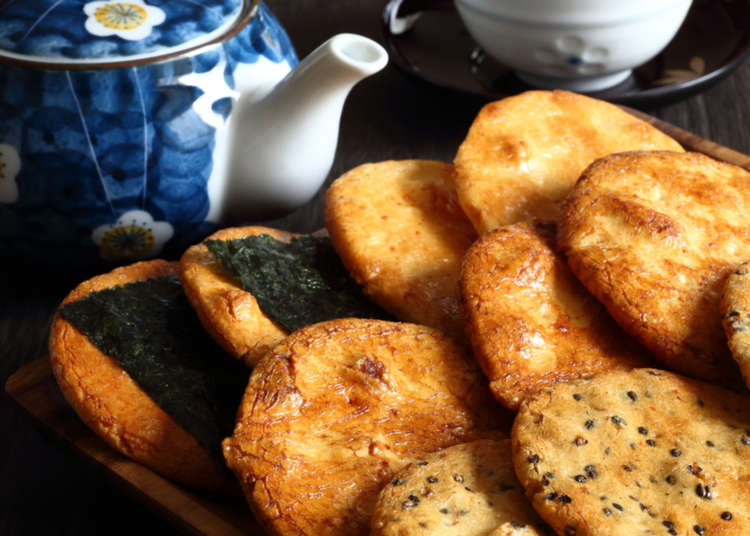 If you haven’t tried them, senbei are a type of traditional Japanese cracker that have been enjoyed for centuries. First introduced to Japan via China in the Tang Dynasty, the original senbei were made from potato and had a cake-like texture. Since the Edo period, however, a salty soy sauce variety of senbei made with toasted rice became popular and nowadays senbei are popularly made with the same toasted rice recipe.

Snack Attack: The Many Flavors of Japanese Rice Crackers

Not all recipes are the same. In the eastern Kanto region, senbei are made from non-glutinous rice flour mixed into a dough and formed into flat discs that are baked or roasted over a flame. However, senbei made from glutinous rice can be found in the western Kansai region. Senbei are sold everywhere from supermarkets and department stores to yatai (street food stands) at outdoor festivals. There are even specialty senbei artisan makers that still exist, especially in older neighborhoods and districts.

Here we will introduce everything about senbei and the different kinds of toasted Japanese crackers available throughout the country. 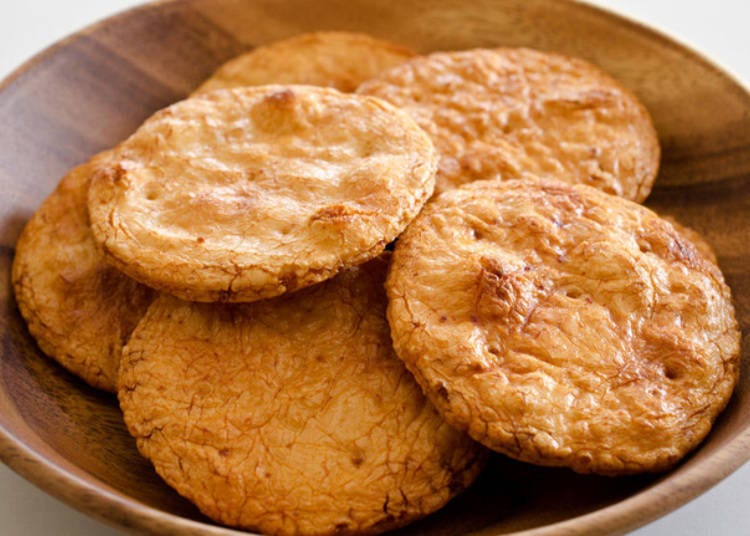 Shoyu (Soy Sauce) Senbei
The most common flavor of senbei you will find in Japan is shoyu (soy sauce). Made by brushing or dipping the rice crackers in shoyu while toasted over a flame, these tasty snacks have an inviting aroma and a deeply savory flavor. 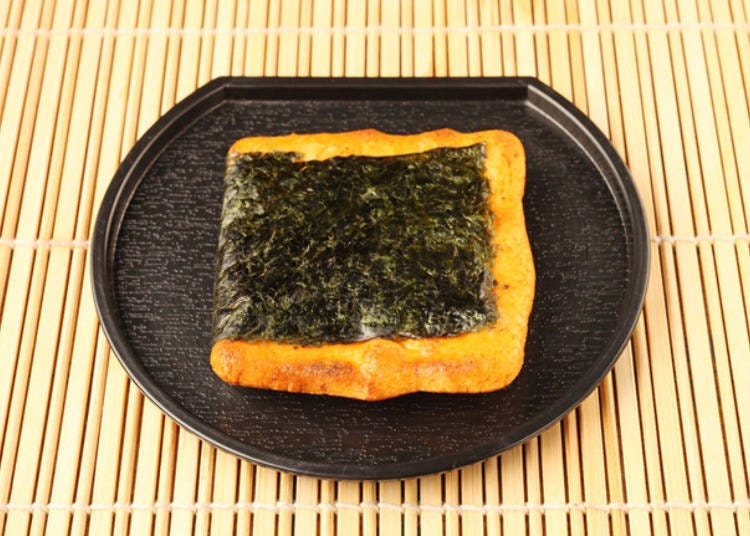 Nori Senbei
To make this kind of senbei, a thin sheet of dried nori (seaweed) is wrapped around toasted rice crackers to give the entire snack a sea-salty taste. Nori seaweed is also commonly made by mixing tiny shredded pieces of nori or aonori (powdered seaweed) into the senbei dough before baking. 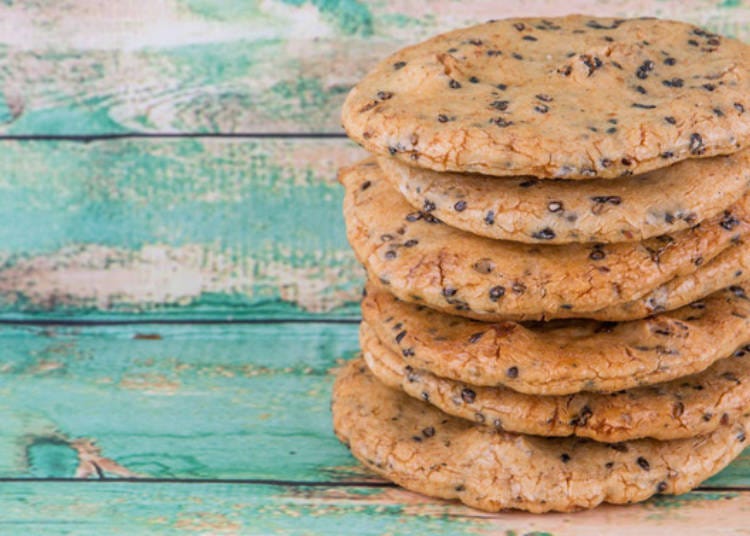 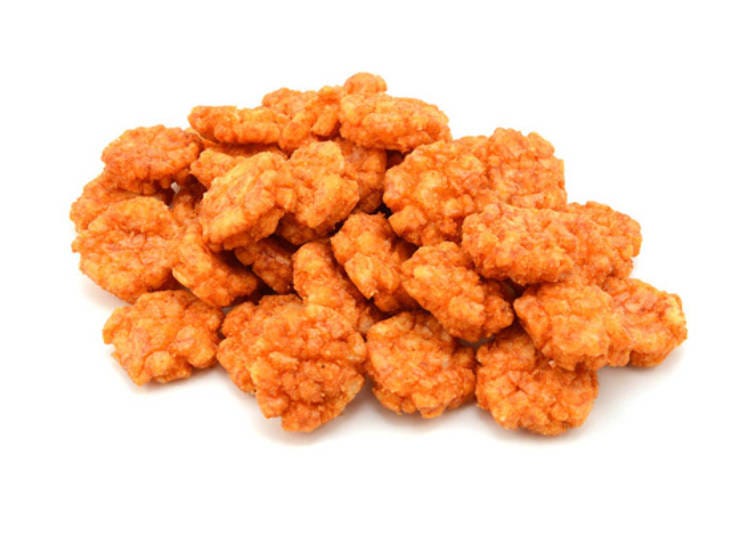 Togarashi Senbei
If you like spicy foods, togarashi (red chili pepper) senbei is the snack for you! The rice crackers are toasted the usual way before being thickly coated in red chili pepper powder and flakes. Though a popular snack for spicy snack lovers, this treat is too spicy for many Japanese people.

Being an island country, Japan incorporates seafood into a variety of different foods - and even into regional senbei! Although their appearance can occasionally be somewhat peculiar to Western palates, these rice cracker varieties nevertheless tend to be quite tasty and go down well with a cold swig of beer. 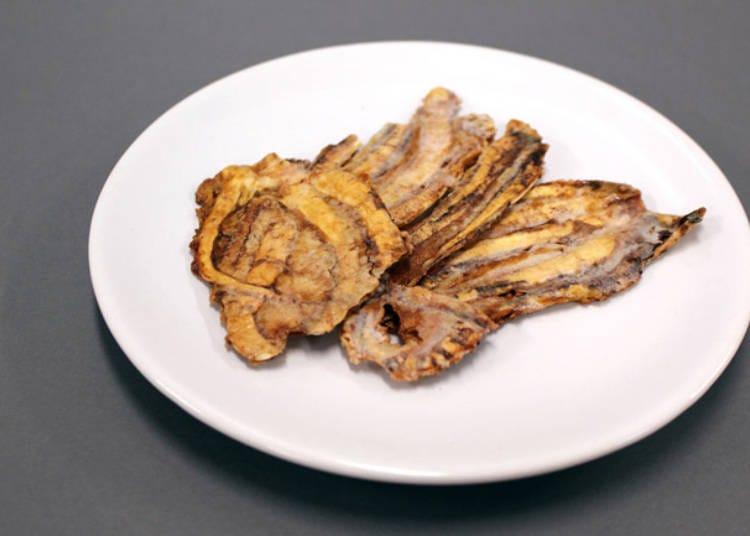 Ika Senbei
Ika (squid) senbei, also known as “ika-sen,” are of several kinds of seafood senbei in Japan. There are numerous ways to make Ika-sen including mixing pieces of grilled squid together with a binding agent before baking them flat, or even by baking a whole squid onto a pre-made senbei. Either way, ika-sen usually retains its squid appearance and with a wonderfully enhanced taste. This snack goes especially well with a cold beer! 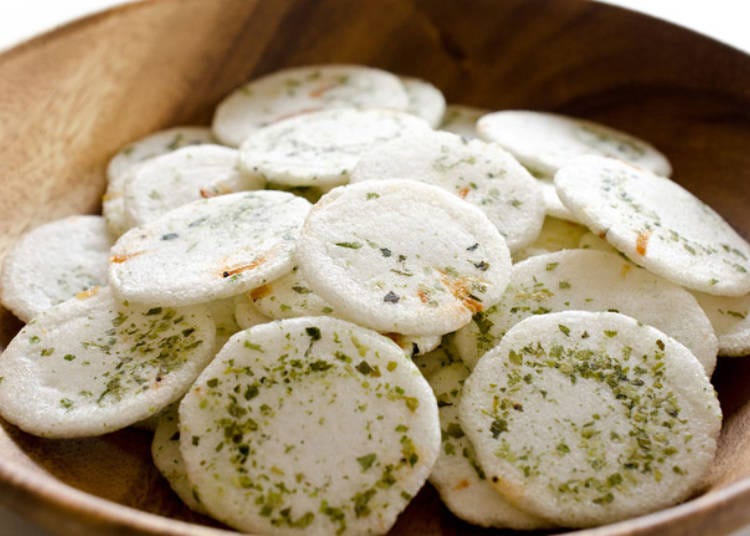 Ebi Senbei
Ebi (shrimp) senbei, similarly nicknamed “ebi-sen,” are made by mixing finely minced shrimp into senbei dough before baking. The color of the shrimp adds bright threads of red and pink to the toasted rice cracker when cooked. Quite an addictive snack and perfect for shrimp lovers! 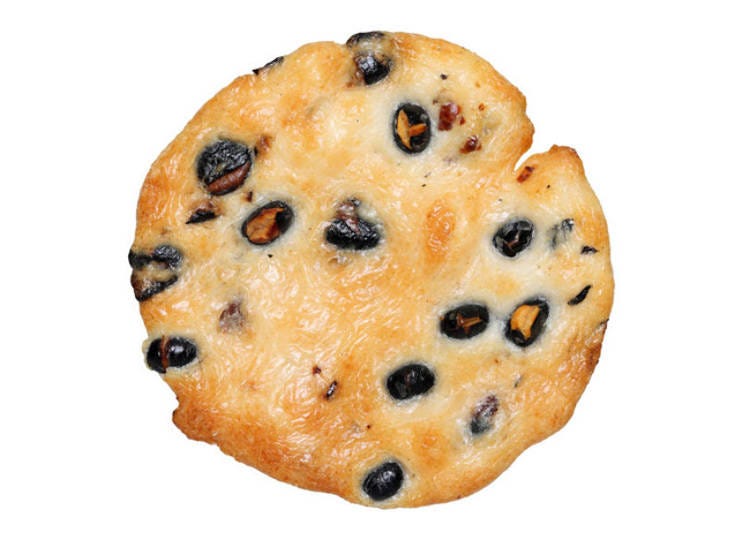 Kuromame Senbei
Kuromame (black soybean) senbei are made from a dough of flour and cooked black beans. The addition of beans tends to make kuromame senbei quite a bit thicker and more filling than other kinds of rice crackers, making this perfect for when you get hungry between meals 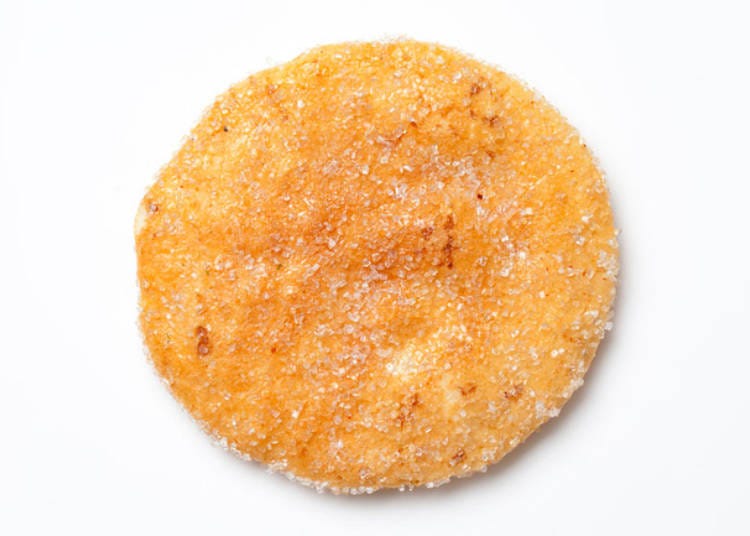 Zarame Senbei
Though a variety of savory rice crackers take up a good majority of Japanese senbei culture, there a number of sweet senbei as well. Zarame (granulated sugar) senbei is one such senbei. Though its appearance may be similar to that of a cookie, it’s taste is quite unique making a great souvenir for sweets-lovers. 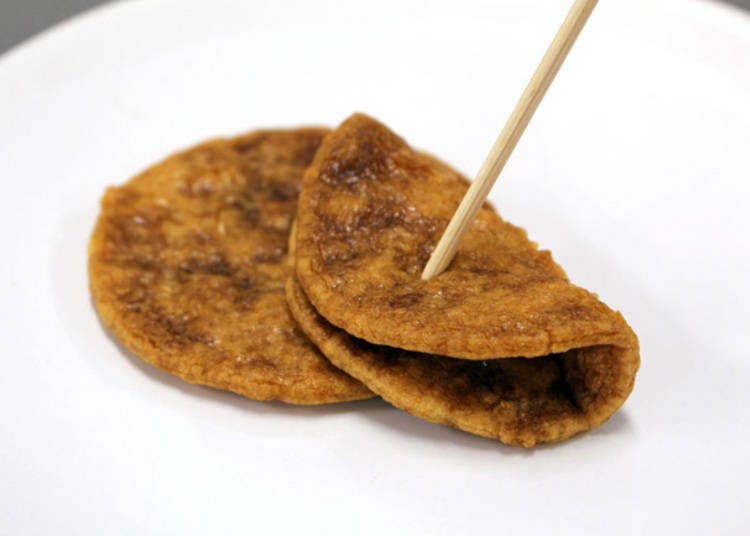 Nure-Senbei, Chiba
Nure-senbei essentially means “wet rice cracker.” It gets this name from the fact that it’s dipped in soy sauce during the cooking process. This results in a moist and chewy rice cracker quite different from the traditional senbei. This unique senbei is a local specialty of the city of Chosi, which specializes in the production of shoyu. 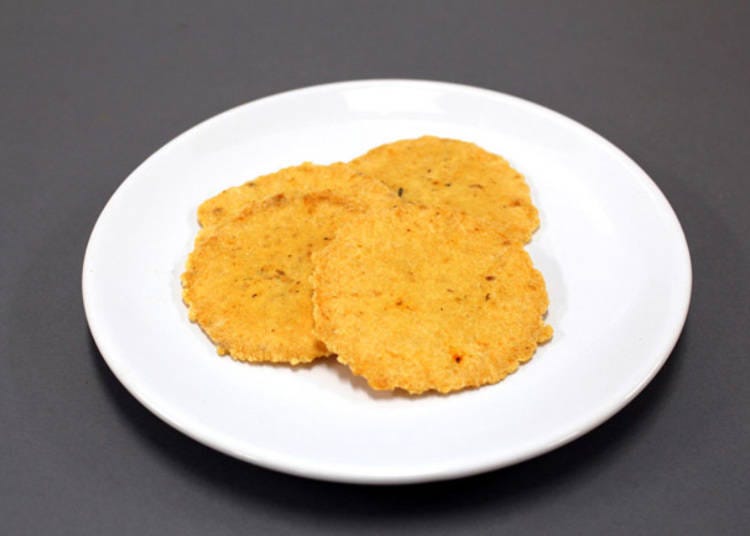 Mentaiko Senbei, Fukuoka
Mentaiko (spicy cod roe) senbei, A.K.A. “menbei,” comes from the area famous for mentaiko, Fukuoka. The mentaiko is mixed into the senbei dough before it’s toasted to bake the spicy flavor right into the rice cracker. 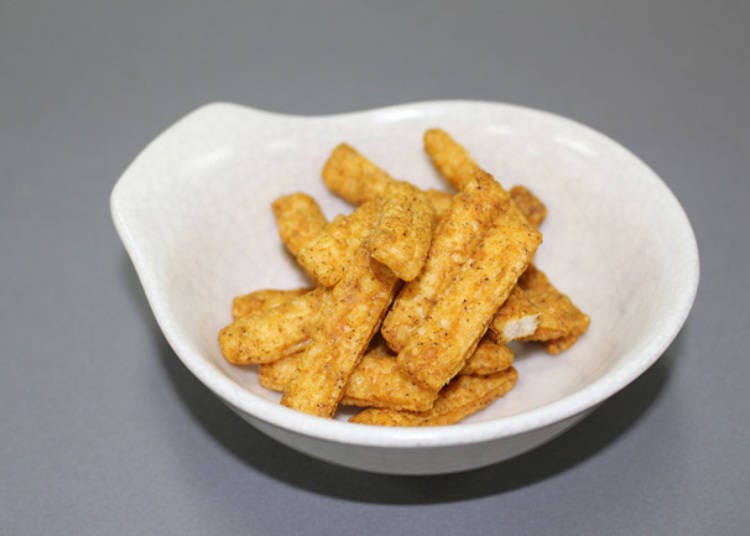 Kare Senbei, Hokkaido
As a result of a collaboration with a famous curry shop in Sapporo, kare (curry) senbei were born. Though Japanese curry tends to be a bit milder and even sweeter than other types of curry such as Indian or Thai curry, it does has a good blend of spices and aromatics. This curry and senbei combination is a truly special treat. 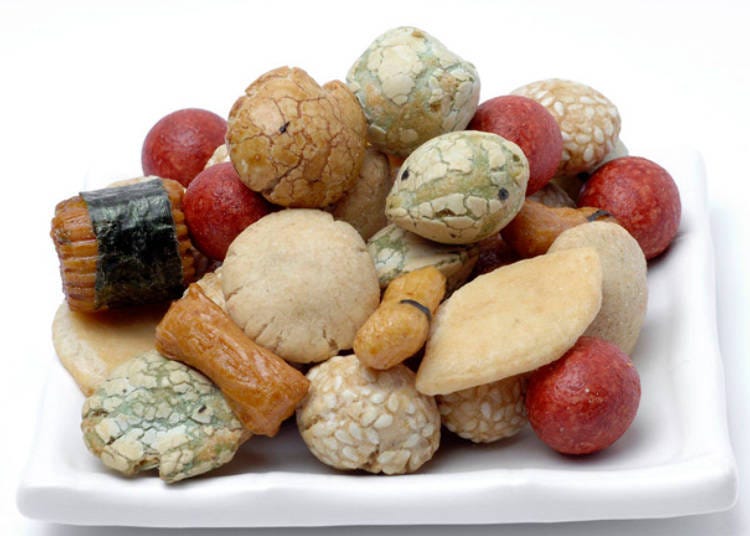 Arare
Arare is another type of rice cracker that’s made like senbei from pounded rice that’s toasted over a flame, but which is much smaller in shape. They get their name from the fact that the sound it makes when roasting them sounds similar to hail (also arare). They come in a variety of shapes such as tiny stars and seed shapes and are often mixed with other ingredients such as wasabi peas. As they are bite-sized, they make a great snack to offer guests you are entertaining in your house. 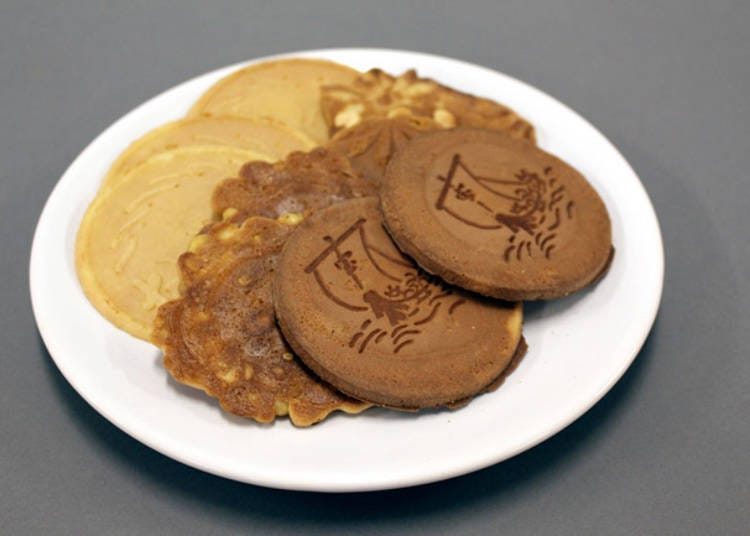 Kawara Senbei
Kawara (roof tile) senbei get their name from the fact that originals were shaped like the roof tiles on Japanese homes or buildings. Made with flour, sugar, and eggs and more like cookie wafers than rice crackers, these senbei make a great snack to enjoy with coffee or tea. They have since evolved and now come decorated with a variety of designs or messages written in icing. 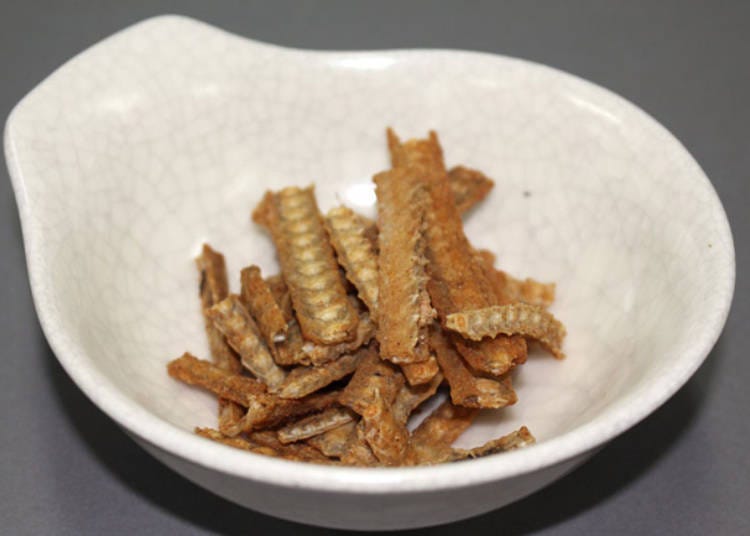 Hone Senbei
Hone (bone) senbei are made from fish or eel bone. After the fillets have been removed and eaten, the spine bones are deep-fried to a crisp before being seasoned with salt or other seasonings. The rich umami flavor goes especially well with Japanese sake which is why you will often see this snack served at drinking establishments in Japan.

Senbei: That Perfect Souvenir (Or On-The-Go-Snack!) 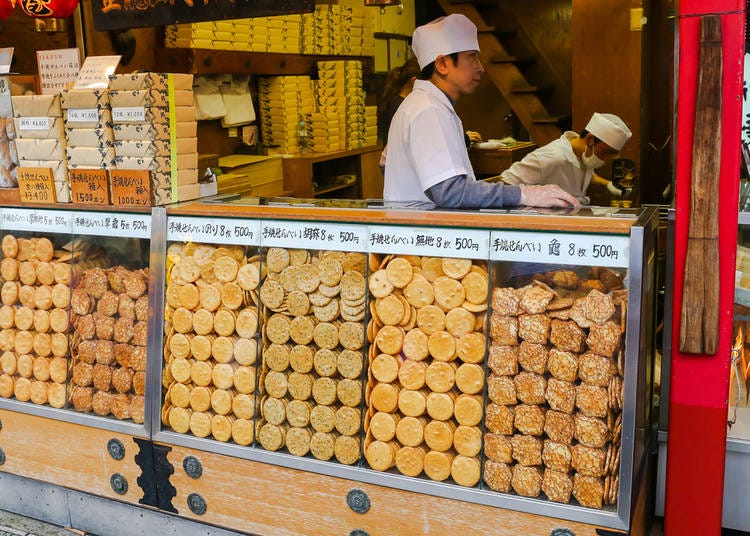 The world of senbei has a variety of flavors and types so be sure to keep a look out for those you’ve yet to try. If you’re in Japan and keep an eye out - particularly in the more touristy areas - you're bound to happen upon an artisan rice cracker shop. Often the shops will even grill a cracker to perfection right in front of your eyes. Be sure to get some of their freshly roasted senbei for a mouthwatering treat!

Related: Easy-to-make Japanese Recipes!
*This information is from the time of this article's publication.
*Prices and options mentioned are subject to change.
*Unless stated otherwise, all prices include tax.