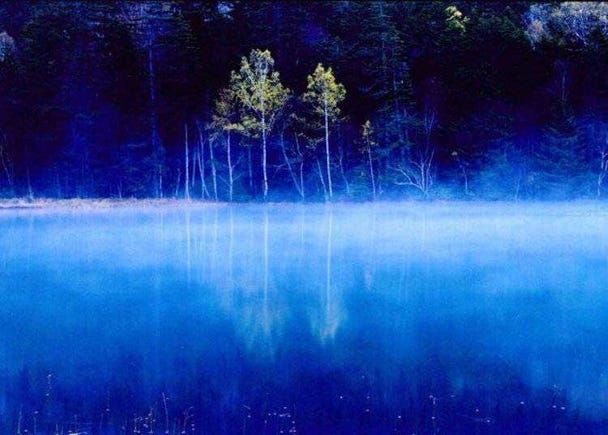 The Spiritual Wilderness of Lake Onneto

Lake Onneto is located within the Akan Mashu National Park in eastern Hokkaido. Ensconced in majestic natural surroundings, the views of the ever-changing colors on the surface of the lake are unforgettable. Those who visit this area surrounding Lake Onneto find its mysterious charms to be peacefully relaxing. 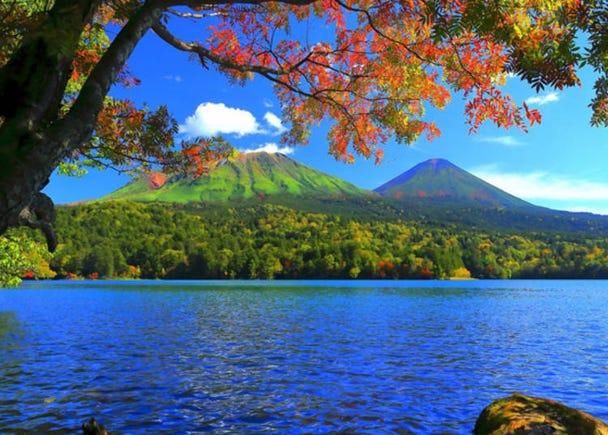 The scenery of Onneto varies throughout the four seasons (Photo: Ashoro Tourism Association)

The secluded lake surface is a kaleidoscope of gorgeous colors

Onneto means "old pond" or "big pond" in the language of Hokkaido’s indigenous Ainu people. It was created when Mt. Meakan-dake erupted and blocked the flow of the Rawan River. It is located about an hour by car to the east of Ashoro Town in the Tokachi region. The lake is also a short 30-minute car ride from Lake Akan, famous for its marimo, a ball-like algae, which is also located within the Akan Mashu National Park. 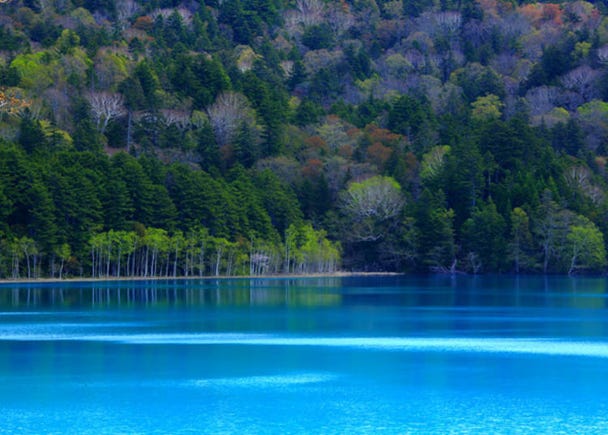 This lake, secluded and hidden away from people in a magnificent natural setting, is one of the Three Great Secret Lakes of Hokkaido; the other two being Lake Okotanpe near Chitose City and Lake Shinonome near Hamishihoro Town. Due to the many changing colors of the lake's surface depending on the season, weather, and angle of view, the lake is also called Goshiki Numa (Five-color Pond). 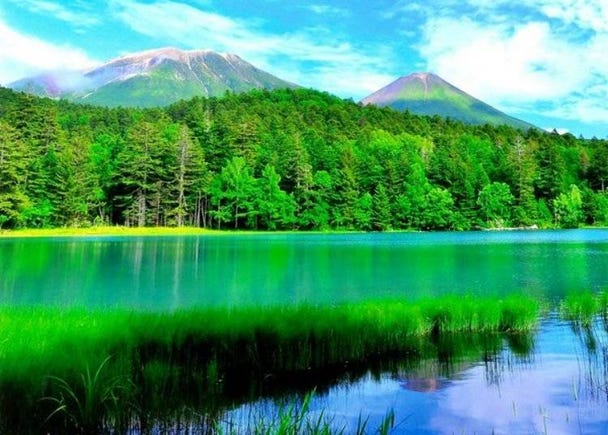 Emerald green lake surface. Depending on viewing angle and light conditions, the intensity of the color will vary. (Photo: Ashoro Tourism Association)

Except for the winter season when the road to the lake is closed (from the mid-December to mid-April) this is one of the best spots in Hokkaido where you can see magnificent scenery. It is only accessible by car, or rent-a-car as there is no public transportation, such as buses, servicing the area. However, the site is equipped with an observation deck on the lake side, walking paths and camping grounds, each having toilets which are properly maintained. Indeed it is a place where you can feel comfortably close to nature.

The observation deck along the lake affords an outstanding view of the area!

I visited Onneto to see this mystical scenery for myself. I first stopped at the observation deck on the western side of the lake and which overlooks the entire lake. From here you can enjoy the beauty of majestic Mt. Meakan-dake and Akan Fuji, as well as the beauty of the surrounding nature and Onneto. I want to see the changing colors of the lake surface and the scenery in every season as often as possible. 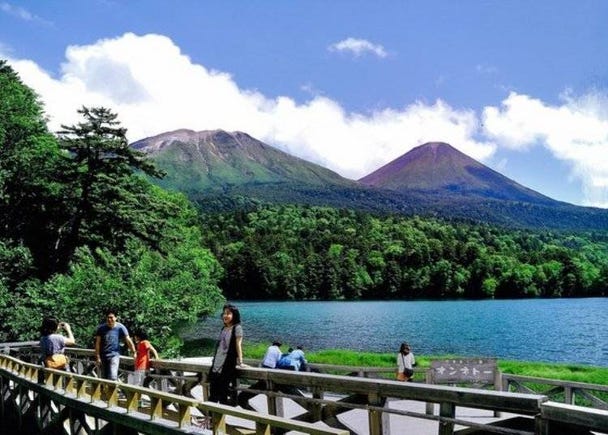 The view of Mt. Meakan-dake (left) and Mt. Akan Fuji (right) from the observation deck which is adjoined by a parking lot. Many people visit here for the spectacular view it affords. (Photo: Ashoro Tourism Association)

The view is particularly mystical when the lake surface is calm and reflects the surrounding scenery. For those interested in seeing this, the best time is dawn when the wind has not yet risen enough to ripple the surface of the lake. 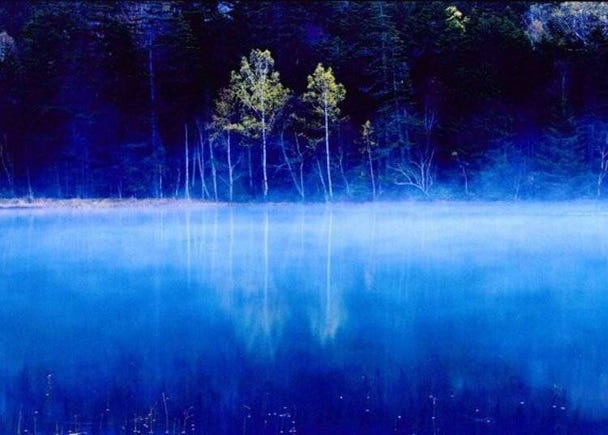 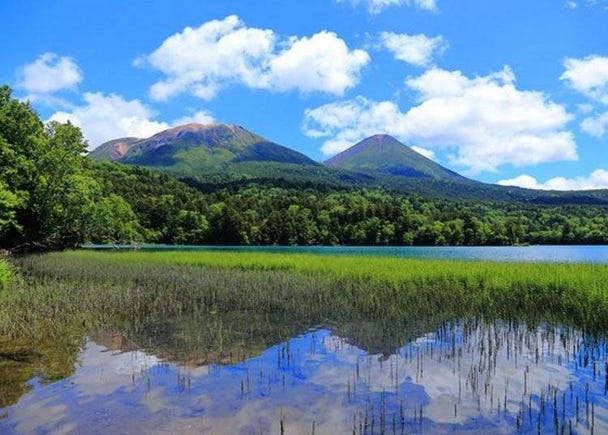 Another world reflected on the water surface. It is possible to see such scenery even in the daytime if the weather is right. (Photo: Ashoro Tourism Association)

Stroll over to Yu no Taki (literally “hot spring waterfall”), another mystical spot

There are many well-maintained footpaths around Onneto, so I recommend exploring the area on foot. This time I decided to take a path that runs along the south side of the lake. The head of the path is only about a five-minute car ride from the observation deck. 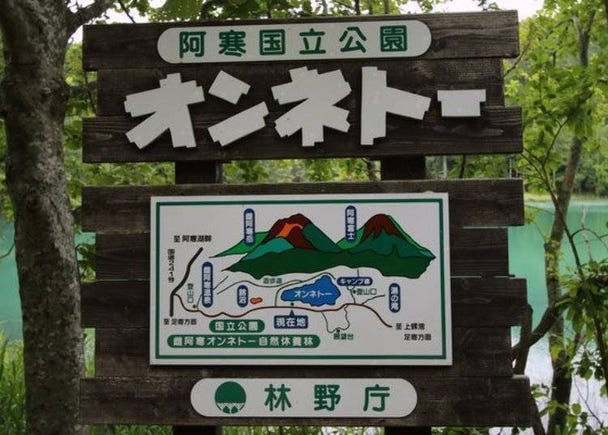 You can start your walk after you park your car in the lot behind the campsite located to the southeast of the lake. The Yu no Taki natural monument is at the end of the path, a distance of about 1.4 km. 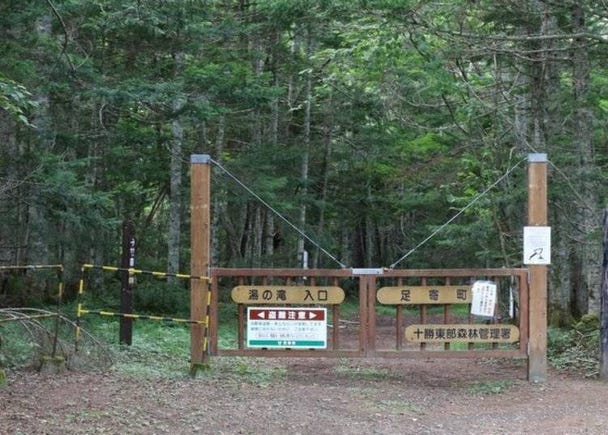 Gate at the starting point of the pathway. Entry by car or motorcycle is forbidden; entry can be gained through the opening to the right of the gate.

Although located within a thick forest, walking is easy because the pathway is relatively wide. Perhaps this is due to the fact that it was originally constructed as a road intended for vehicle use. Feeling the pull of nature as you walk through this wild expanse is invigorating and refreshing. 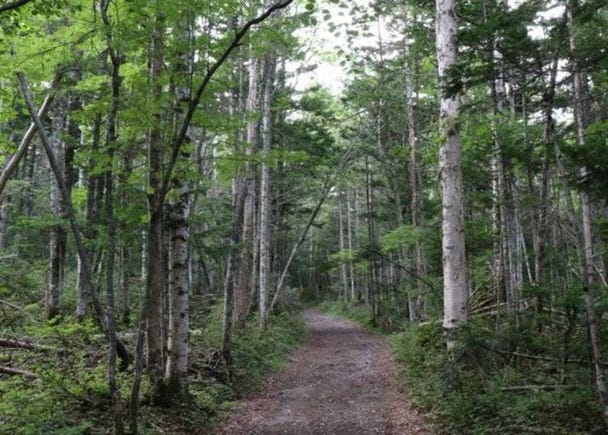 In some places trees have been toppled over, the result of a typhoon that hit the area in 2016, but the pathway has been cleared of any that had fallen on it.

Pristine forest extends on either side of the pathway. Here you can see giant Akaezomatsu (Sakhalin spruce) and in the fall when the leaves begin to change color, the leaves of the Nanakamado (Japanese rowan) and Itayakaede (painted maple) turn crimson and purple. Walking through these brilliant colors while admiring the scenery is twice as enchanting. 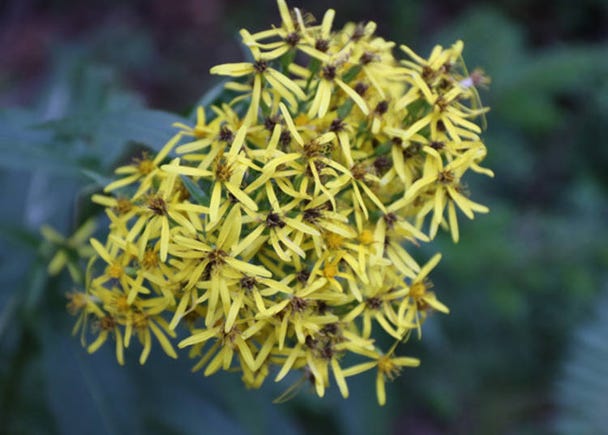 After about 20 minutes you will arrive at Yu no Taki, its white waters tumbling down over black rocks. The waterfall is about 20 meters in length and it gets its name from the fact that it is hot spring water flowing over it. 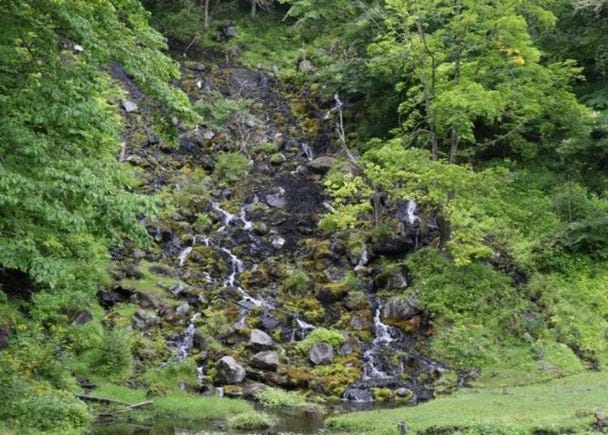 Though no longer present today, in the past there was a bathtub at the base in which visitors could bathe

Yu no Taki was designated as a national natural monument in 2000 due to being an unusual place formed by manganese ore, the same that is indispensable in the making of steel.

Normally manganese ore is formed at the bottom of the ocean, but here it has been formed by elements contained in the Taki no Yu spring water as well as microorganisms on the cliffs reacting to it. It seems that this is the only place on earth where manganese ore is formed on the earth's surface! Mining was also done here in the past. 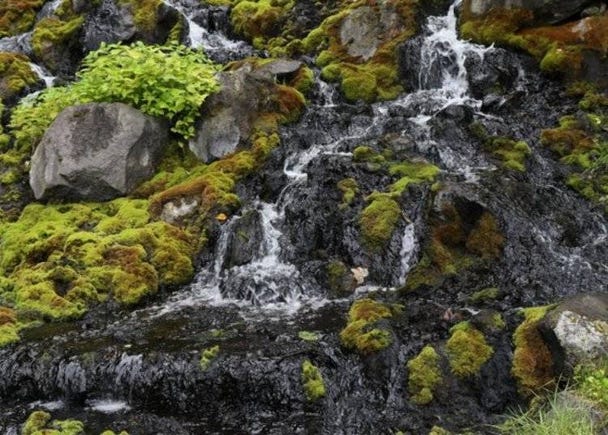 This is not a dynamic waterfall sending down a large torrent of water, but one that embodies the Japanese ideal of wabi sabi (quiet simplicity) with its ribbons of white water traversing the black

Yu no Taki, like Onneto, is another mystical spot where you can catch a glimpse of another uniquely different natural phenomenon. All that is left after visiting here is the trek back to the starting point.

After returning to the starting point I decided to take a stroll along the eastern side of the lake. The view of the pristine forest is even more striking here and affords a view of Onneto from the circuitous route. 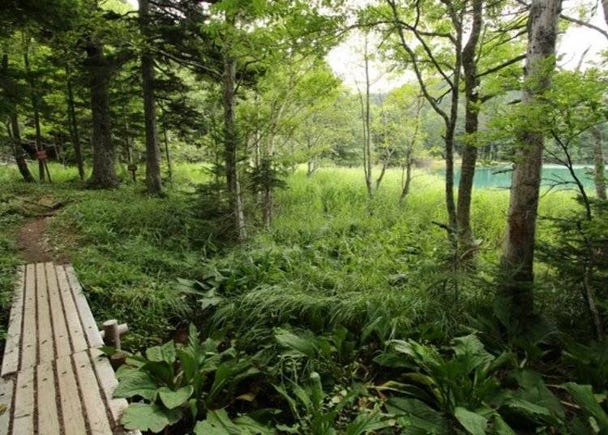 Even though the pathway is maintained, you’ll need to watch your step because there are obstacles in some places, such the roots of trees in some of the narrower places. 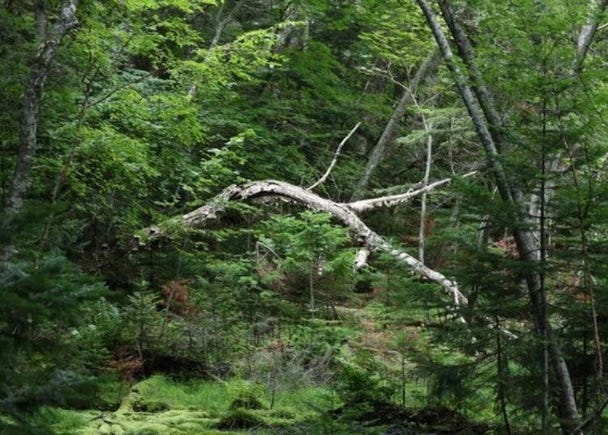 On the observation deck you can place yourself in the middle of the spectacular view of Onneto and a walk along the pathways enhances the mystical and powerful attraction of nature. One becomes aware not only of the changing colors of the lake, but also the special magnetic appeal of Onneto.

Does Nishikinuma hold the secret to why the colors of the lake surface of Onneto change?

Although it is off the pathways, there is one other spot you should visit if you can. It is Nishikinuma (Brocade Pond), a small, orange pond located along the road connecting the lake with Meakan Hot Spring. 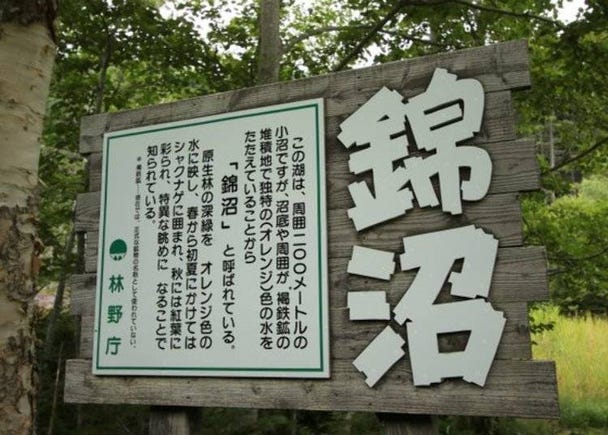 It is only about five minutes away from the observation deck and may be difficult to see because it is surrounded by thick forest. There is a signboard along the way.

The unusual changes in color of the lake’s surface is believed to be produced when the waters from Onneto flow into it because the sediment in Nishikinuma is rich in iron. 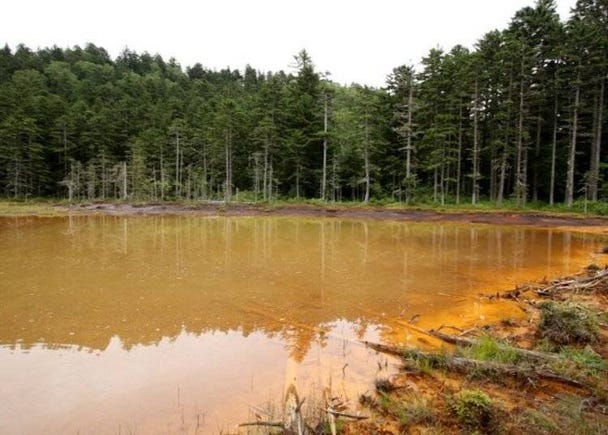 Seek out the distinct scenery of the four seasons! Autumn leaves under a star-studded sky

The scenery of Onneto goes through remarkable changes according to the season, time of day, and weather. These attractions cannot be experienced in a single visit! To see these magnificent changing views one needs to pay several visits at different times, each one giving the impression of visiting the place for the first time. 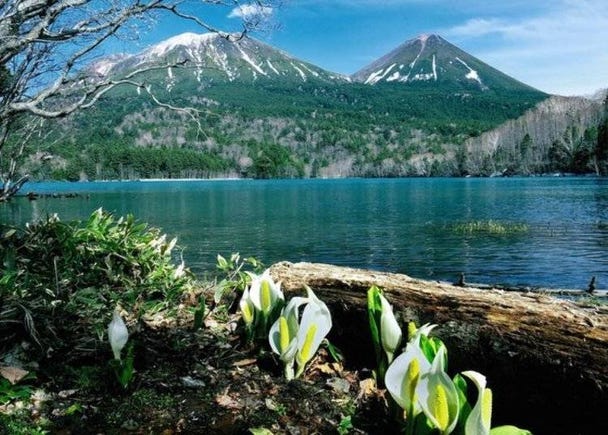 Flowers of the white skunk cabbage are harbingers of the approach of spring (May is the best time for viewing). Onneto offers the added charm of being able to see many beautiful wild flowers (Photo: Ashoro Tourism Association) 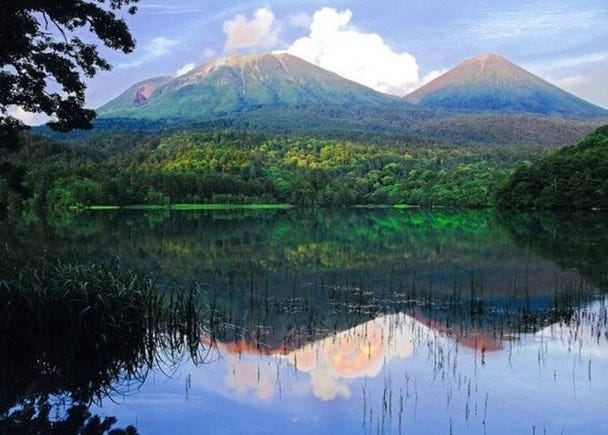 The vibrant green colors of the trees are reflected on the lake surface as dusk descends on a summer day. Summer is perhaps the best of all season to visit Onneto (Photo: Ashoro Tourism Association) 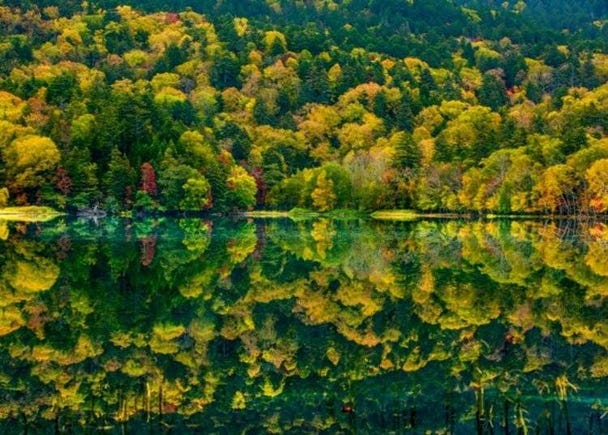 Between the middle of September and the early part of October the changing colors of the trees mark the arrival of autumn. Due to the high elevation, there are sharp temperature changes between daytime and nighttime, which contribute to the striking colors of the leaves. I particularly recommend this season. (Photo: Ashoro Tourism Association) 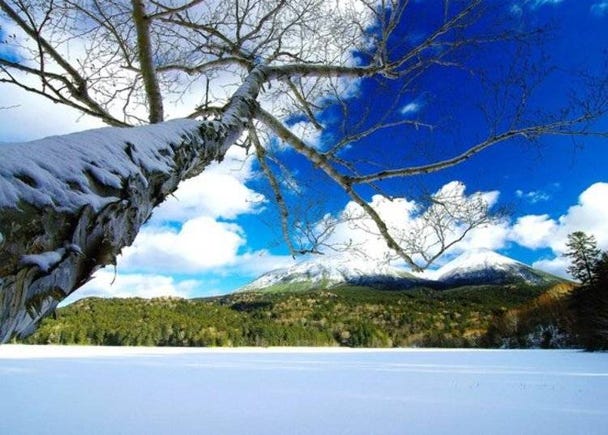 After November snow begins to make its appearance. Note, though, that between the middle of December through the middle of April the road to Onneto in the national park is closed for the winter season, so it is not possible to approach the area around the lake (Photo: Ashoro Tourism Association) 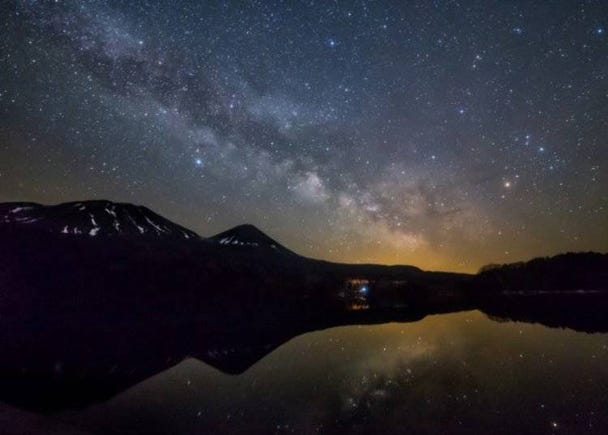 A view at night. There is no artificial lighting around the area, so the myriad stars sparkle like diamonds above the lake and are reflected on its surface (Photo: Ashoro Tourism Association) 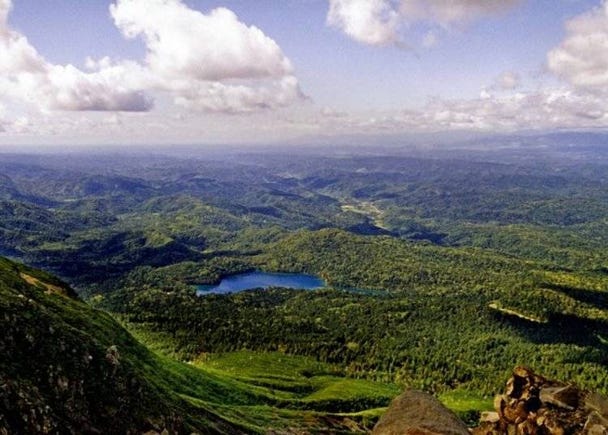 The view looking down from Mt. Meakan-dake on Onneto is excellent, but you need to be equipped for mountain climbing to attempt the climb to the peak.

Onneto presents an infinite variety of views afforded by the changing colors of the lake surface amplified by the changing seasons as well as transitions from morning to afternoon to night. Each is beautiful and unforgettable in its own way. This is a place worth visiting over and over again not only because of its magnificent scenery, but also because you can experience nature with all your five senses. Be sure to stop by for a visit if you happen to be traveling in the Kushiro and Tokachi regions of eastern Hokkaido.