HOME Top 14 Things to Do in Takayama: Enjoy Sightseeing and Great Food in Japan's Spellbinding Town 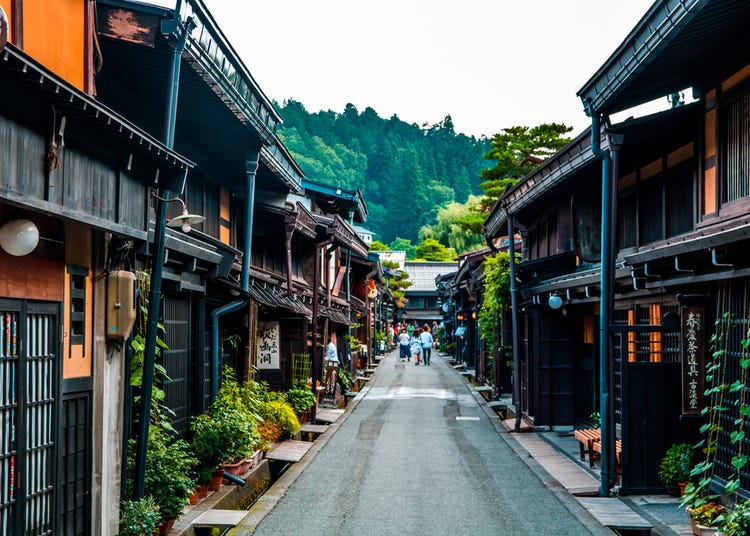 Top 14 Things to Do in Takayama: Enjoy Sightseeing and Great Food in Japan's Spellbinding Town

Takayama City is located in Hida Region in the northern part of Gifu Prefecture. This city has a charming townscape and is a popular tourist destination because of its historical buildings and traditional culture which has been in place since the Edo period (1600 to 1868). Most people know it by the name Hida Takayama.

This article lists a number of sightseeing spots that will allow tourists to fully enjoy the charm of Hida Takayama. We will also provide information on dishes that highlight Hida-gyu or Hida beef as a part of the exquisite Wagyu brand.

Let’s jumpstart this list by seeing some of the most common tourist spots in this city. 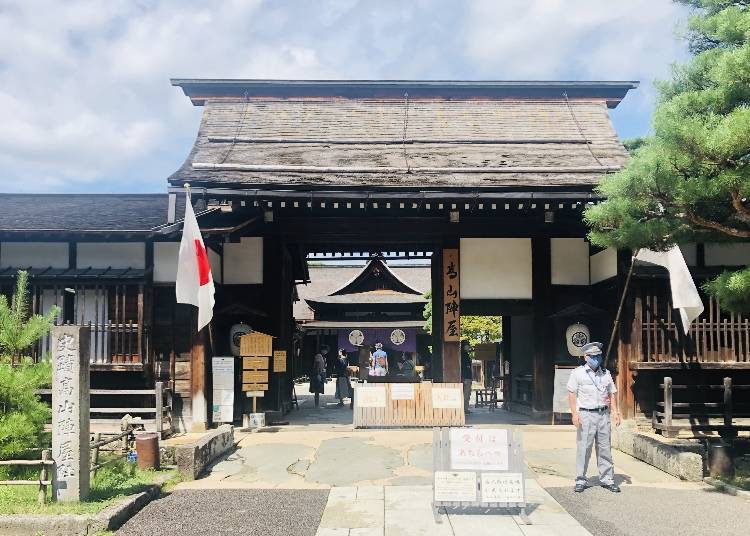 Takayama Jinya is a government office that served as the workplace of magistrates and county officials dispatched by the military government or bakufu. Sixty of such offices existed in Japan by the end of the Edo period. Still, at present, Takaya Jinya is the only existing main building. As such, the structure is considered a national historic site. 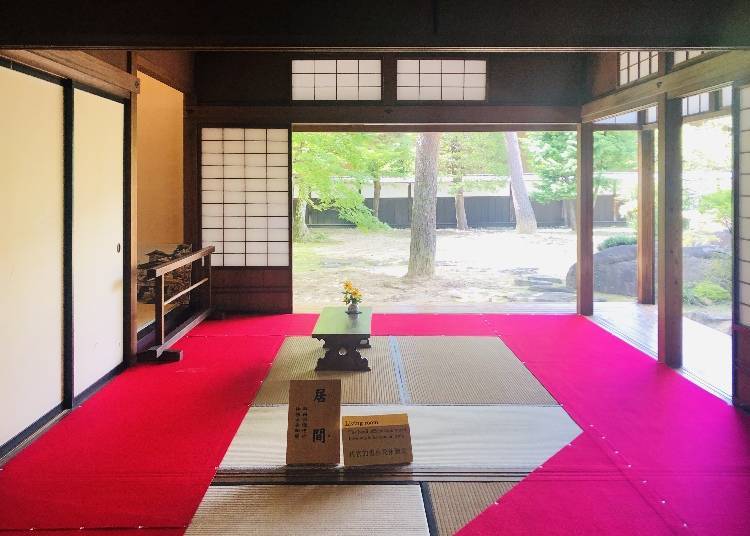 Takayama Jinya also served as a courthouse during the Edo period. It has maintained the Oshirasu -- a place where criminals sat during court proceedings. 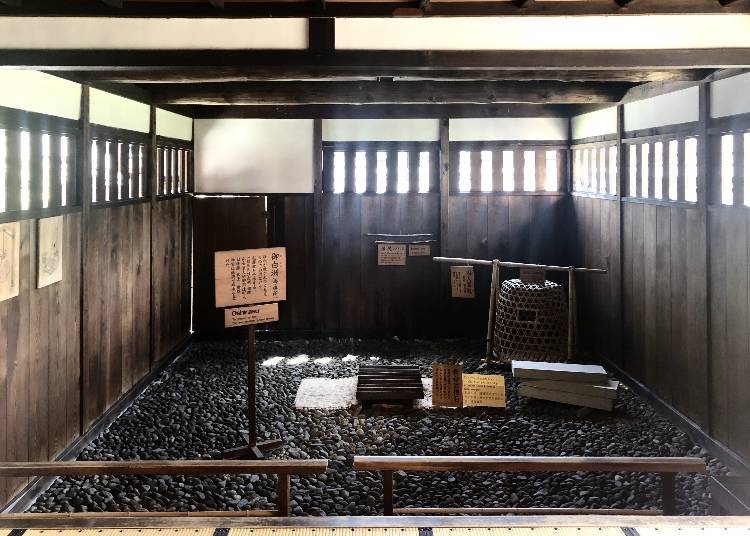 Takayama Jinya also has volunteers that offer free on-site tours that allow you to appreciate the history and charm of Takayama Jinya's beautiful and well-maintained courtyard. 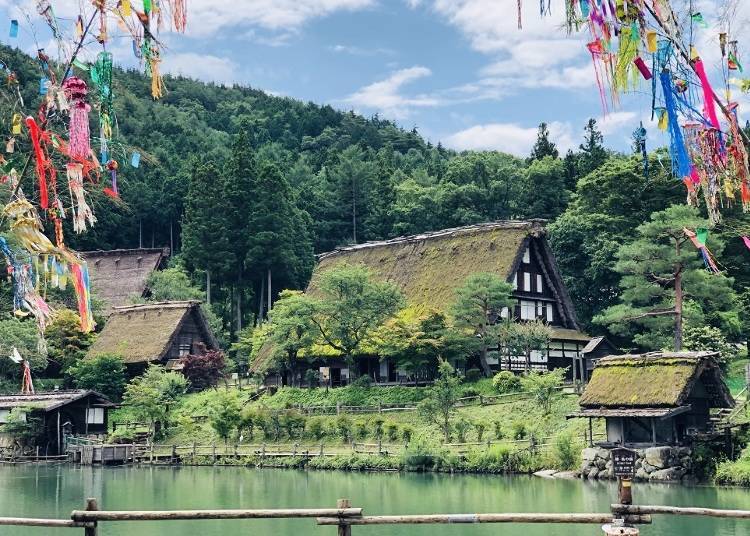 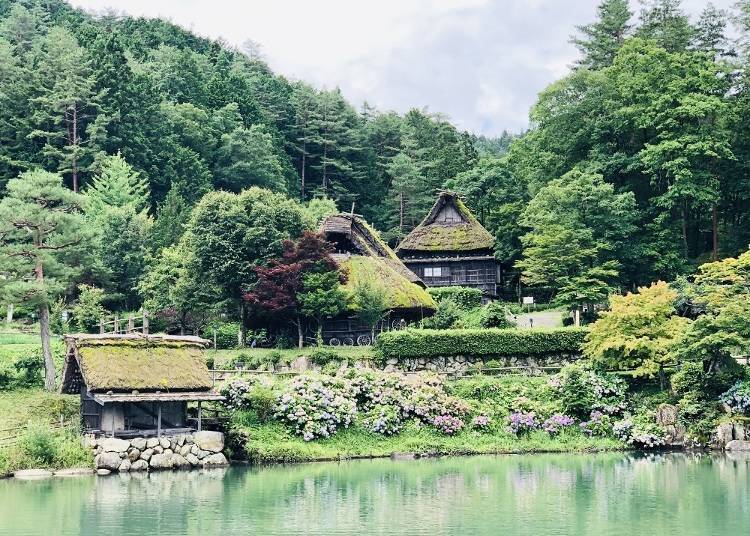 You can also go inside these houses to fully appreciate the structure of one of Japan's traditional houses. Hida Folk Village also has a classroom that gives tourists a hands-on experience of Hida's folk craft.

In this classroom, you can make a Japanese amulet called sarubobo and even experience kumihimo, which is a form of braid-making featured in a popular anime film set in the Hida region. 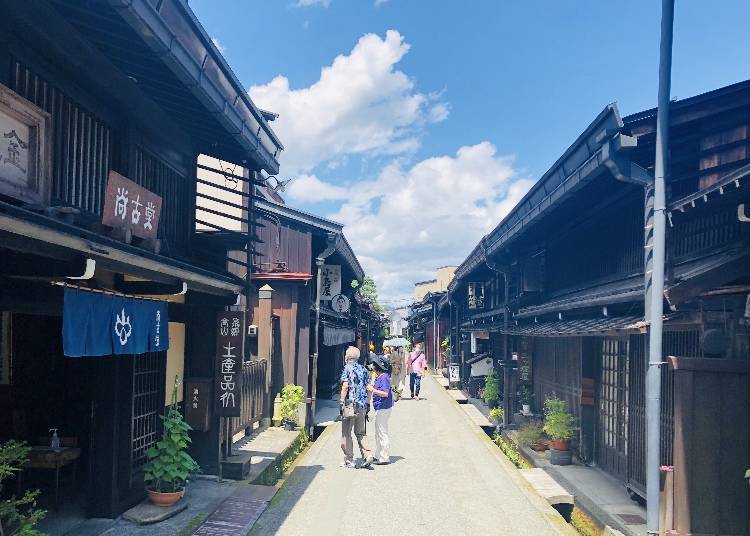 Furui Machinami (Old Town) are iconic tourist spots in Hida Takayama featuring a stretch of buildings from the Edo period. The most popular among these streets is the Sanmachi-dori, which extends from the Kamiichinomachi to the Kamisannomachi. This street is considered a Preservation District for Groups of Traditional Buildings.

Blessed with good rice, water, and climate, Hida Takayama is the epicenter of sake brewing in the region. As such, Sanmachi-dori has rows filled with historical sake breweries where tourists can go and taste local sake. There are also traditional craft and souvenir shops, restaurants, and coffee shops, making it the perfect spot for all people to enjoy Hida Takayama.

4. Marvel at Hida's crafts and passion in the Takayama Matsuri Yatai Kaikan 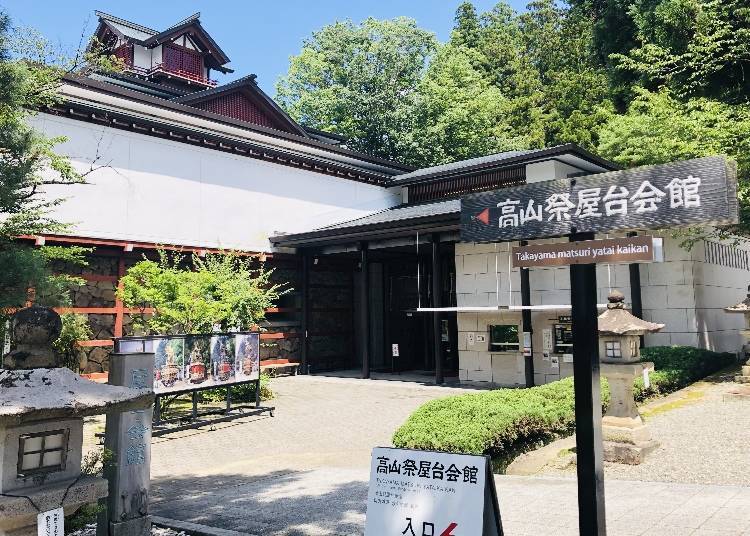 The Takayama Festival, held in Hida Takayama in spring and autumn, is one of Japan's three most beautiful festivals. Gorgeous floats parade the city, and hundreds of thousands of tourists flock to the city during the festival.

Takayama Matsuri Yatai Kaikan is a facility that displays four autumn festival floats. This is the only place where the actual Takayama Festival floats are on permanent display. 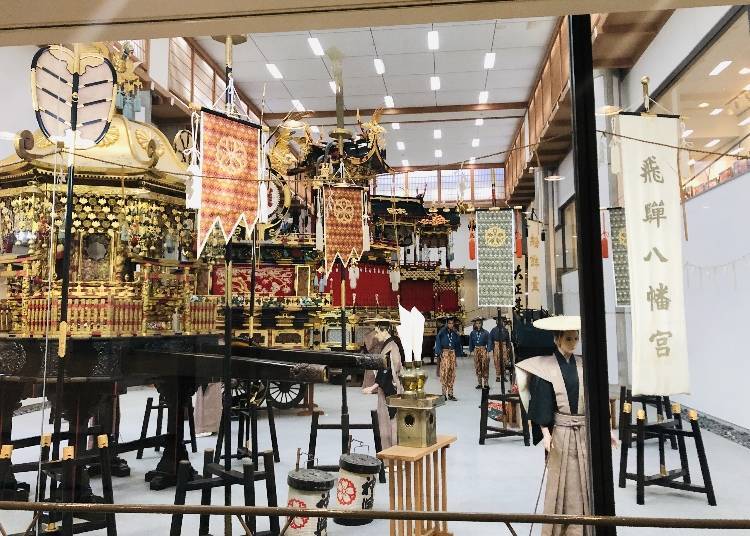 The history of craftsmen who made these festival floats goes back to the Hida craftsmen who built palaces and temples in the capital during the Yamato period (about 400 years from the 4th century to the beginning of the 8th century). These festival floats were meticulously created using traditional techniques passed down throughout history. This place allows you to fully appreciate the craftsmanship and passion that goes into these floats. 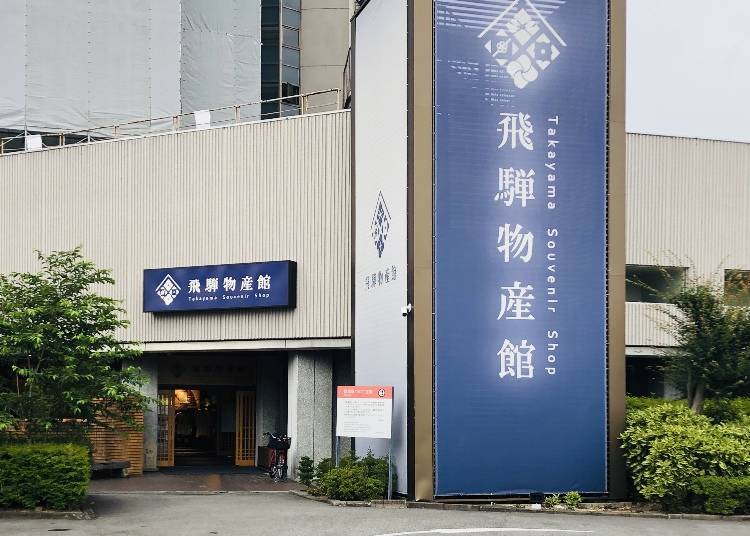 The Takayama Souvenir Shop, located within the Takayama Green Hotel's vicinity, is like a museum of souvenirs with over 7,000 items! You can enjoy the best selection of products in Takayama City just by looking around. 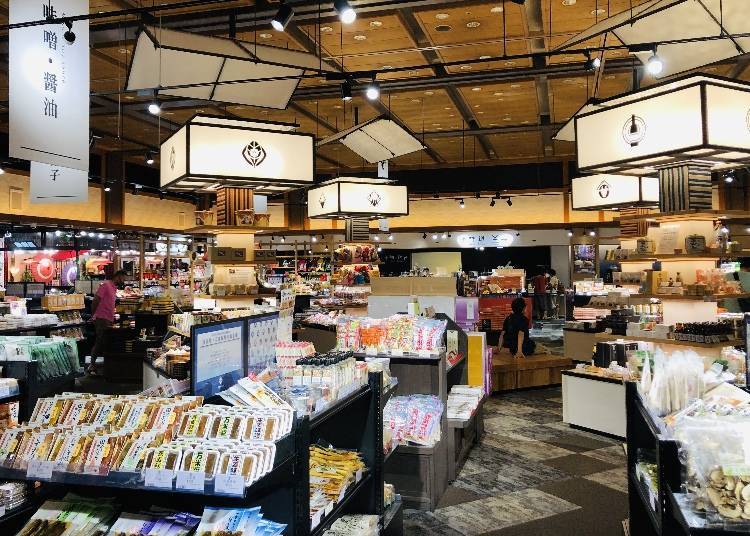 Besides shopping, they also have a hands-on experience corner where you can make Hida's folk craft called sarubobo and grilled salted rice crackers. 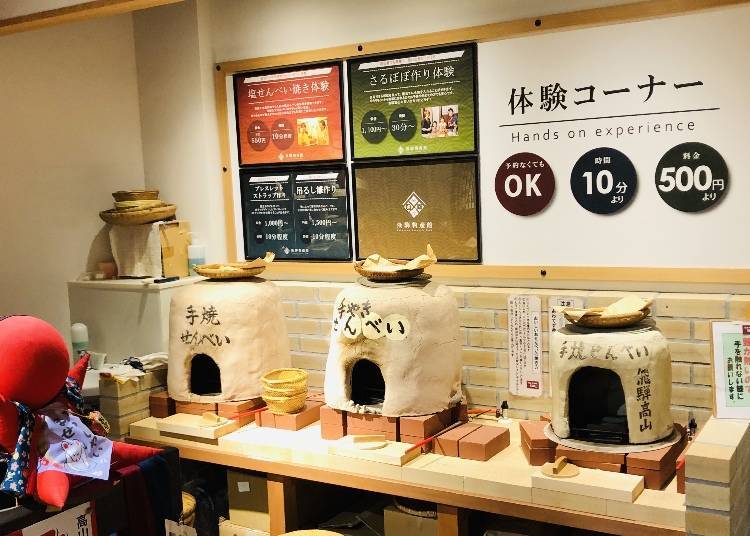 The shop has staff that will guide you, so you can enjoy the corner without worry. Be sure to try it and make the best out of your stay in Hida Takayama. 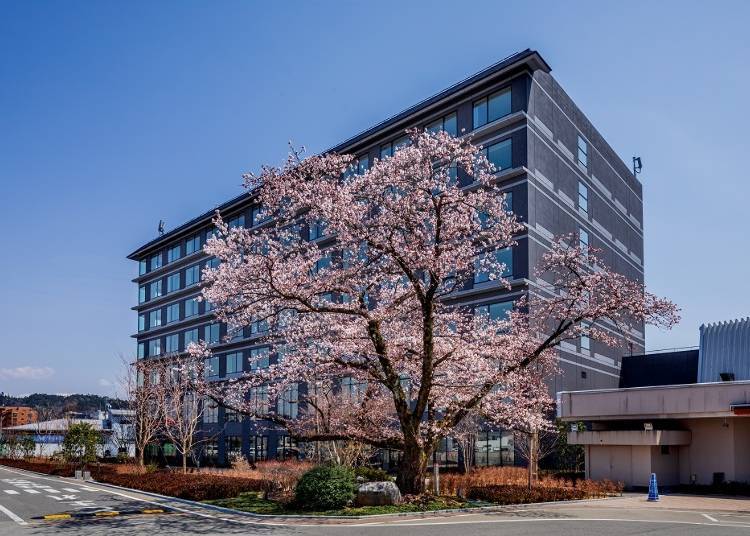 The Takayama Souvenir Shop is located within the premises of Takayama Green Hotel. The hotel is a 6-minute walk from JR Takayama Station. The hotel's highly accessible thanks to an exclusive shuttle bus that departs from the lodging facility. They also have a parking lot that can accommodate 105 cars and is located at a convenient spot if you plan to go sightseeing around Hida Takayama. 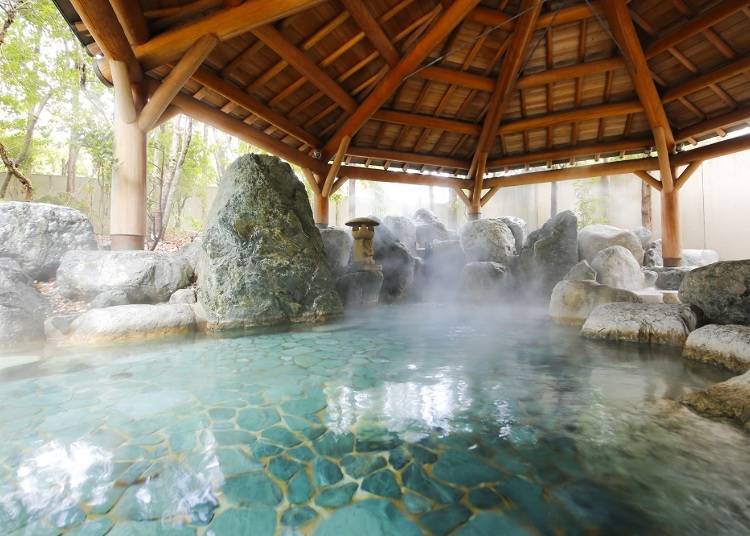 Takayama Green Hotel is best-known for its alkalescent and skin-beautifying natural hot springs. Their indoor bath allows you to marvel at the view of the seasons through a panoramic glass wall.

Aside from this, there are also two open-air baths -- one is a cypress bath with a hot tub, while the other is a rock bath highlighted by romantic lights. They also serve delicious food, and their menu features an array of Japanese, Western, and Chinese food.

The hotel opened a new building called the Ōrinkaku in June 2020. Guest rooms are adorned with greenery and traditional crafts of Hida Takayama. The rooms also feature a view of Hida Takayama. The hotel's restaurant called Dining Marchē Green Court allows you to enjoy dishes cooked by a chef in front of you using local ingredients and Hida beef. 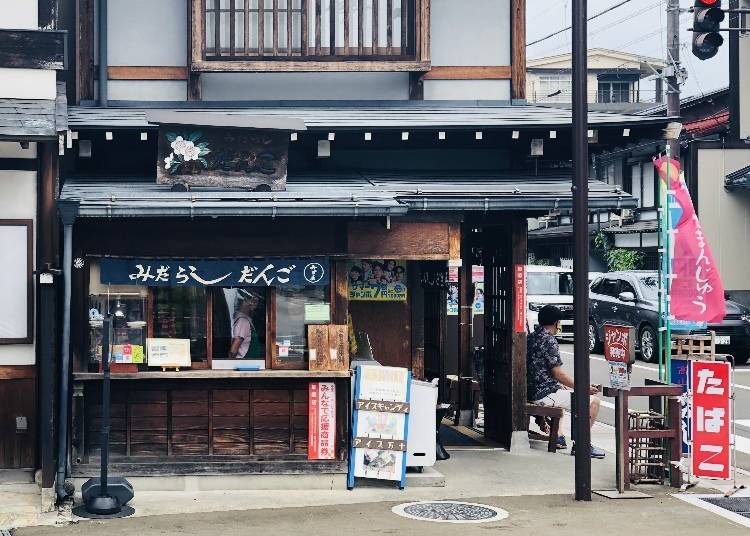 Mizuma is a dango store located along Sanmachi-dori. If you need a snack, we recommend that you order their midarashi dango or skewered rice dumplings.

While midarashi dango often has a sweet and salty flavor, in Hida Takayama, this delicacy adopts a savory taste because it is grilled in soy sauce. You can also eat it while walking, so be sure to enjoy its flavor with the atmosphere of Furui Machinami. 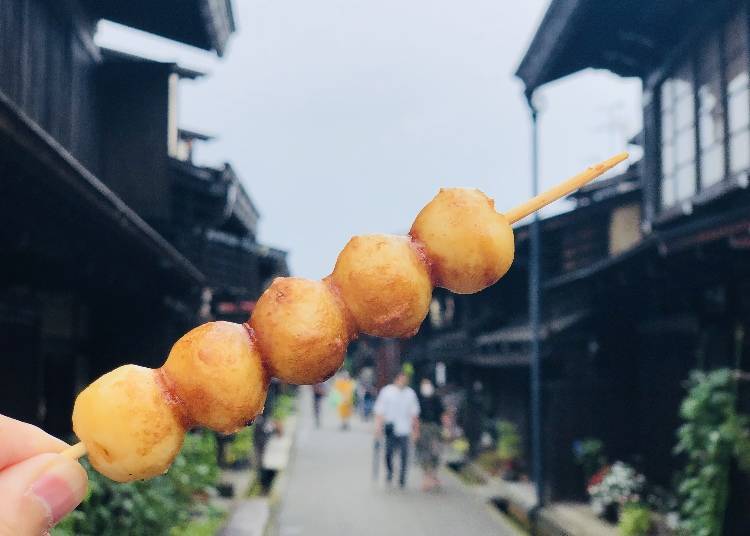 By the way, there are no trash cans around Furui Machinami, so you can either throw your trash at the store where you bought the food or bring it home with you.

8. Full your belly with a Hida beef burger bursting with umami flavor! 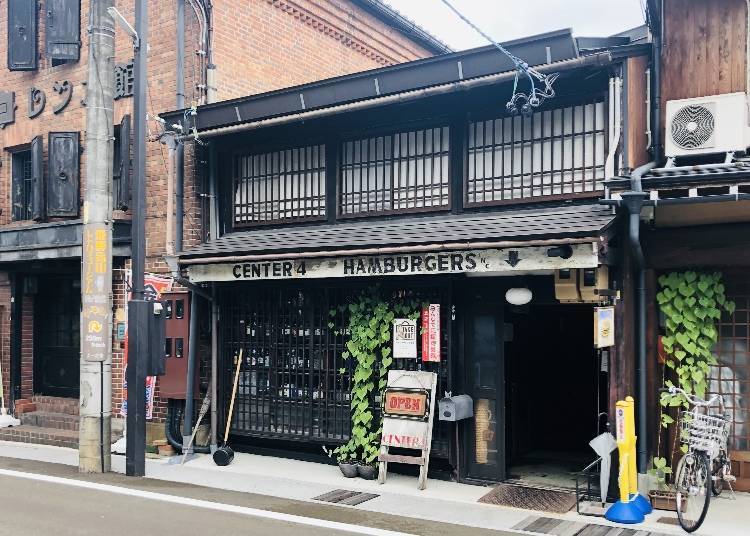 CENTER4 HAMBURGERS is a hamburger restaurant in the Furui Machinami area. Their most popular dish is the Hida beef hamburger sold at a limited quantity! The dish is made with ingredients from Hida and the patty is made with 100% Hida beef! A bite of the hamburger is bursting with umami flavor. 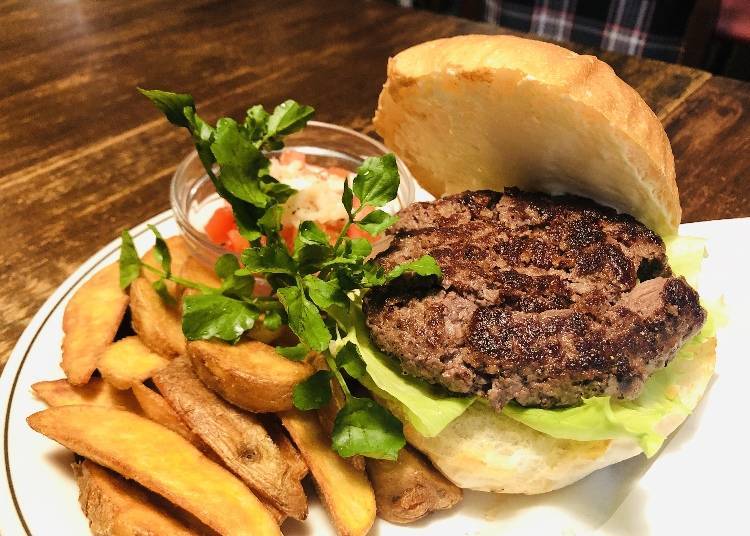 Aside from this, they also have a variety of hamburgers, such as cheese hamburger and avocado hamburger. They also serve 15 to 20 kinds of beer from the U.S., Germany, and Belgium. Because of the shop's popularity, we recommend that you make a reservation in advance. 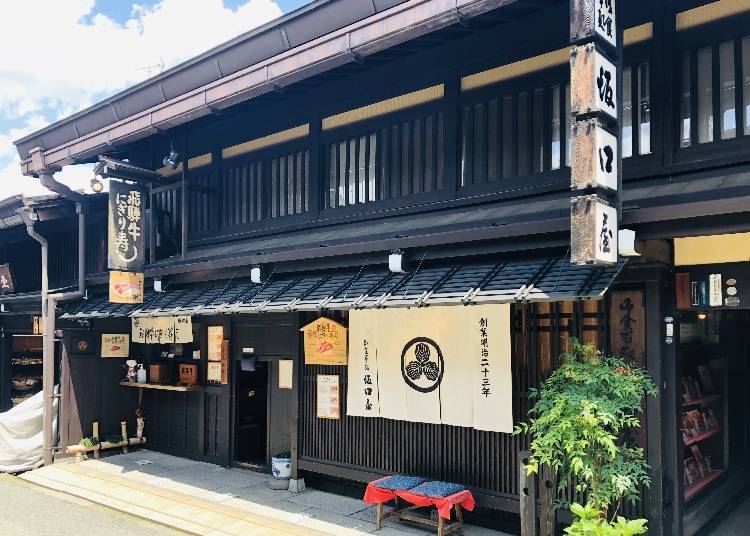 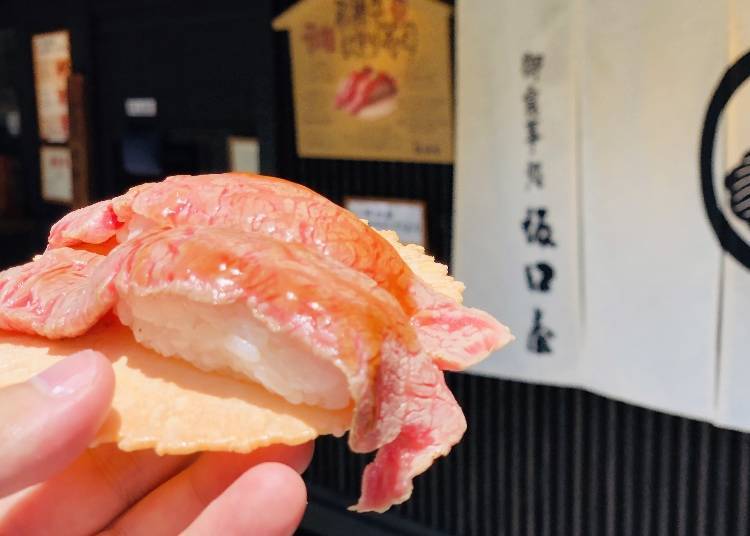 Seared Hida beef goes perfectly with the vinegared rice, sweet sauce and wasabi. Instead of a plate, the sushi is served on a shrimp cracker, so it does not leave any trash. You can also enjoy Hida beef inside the restaurant, so be sure to try this option. 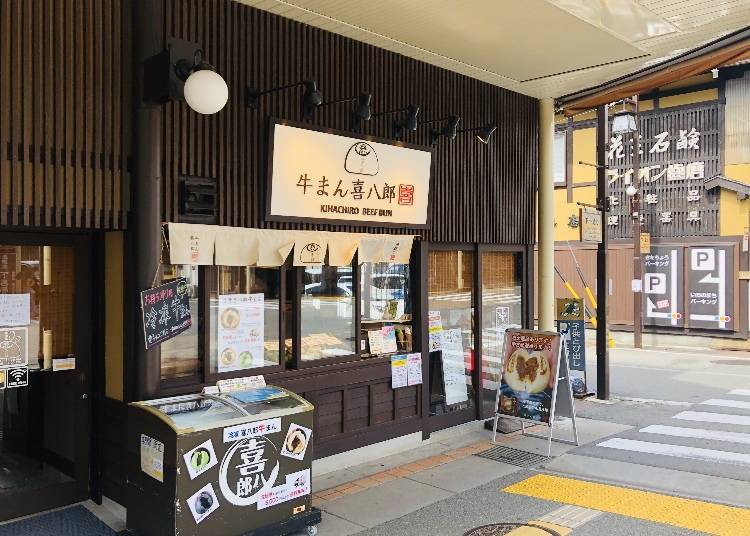 Kihachiro Beef Bun is a hot and fluffy bun packed with the umami of Hida beef. The appearance and taste of this fantastic Hida beef gourmet snack will surely make you smile. 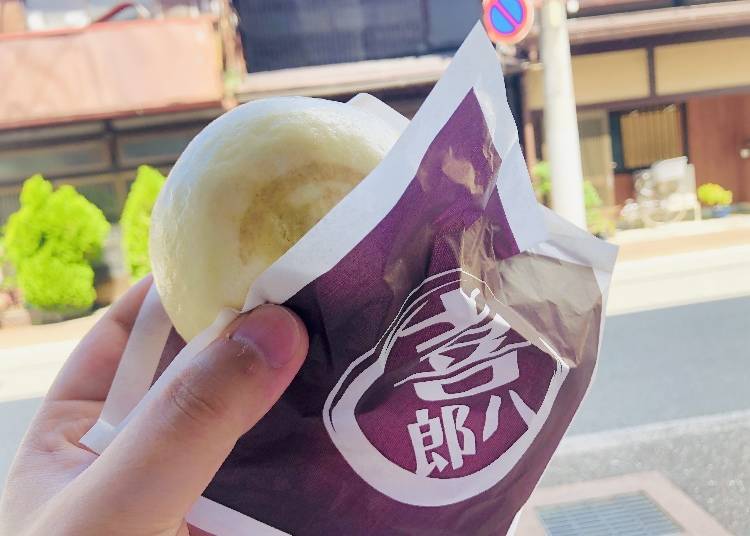 You can also eat this while walking, but you can also enjoy it inside the store since they serve it piping hot. Aside from Hida beef, they also have Chinese-style, matcha, and black sesame flavors. It is also sold frozen for those who want to buy it as a souvenir. 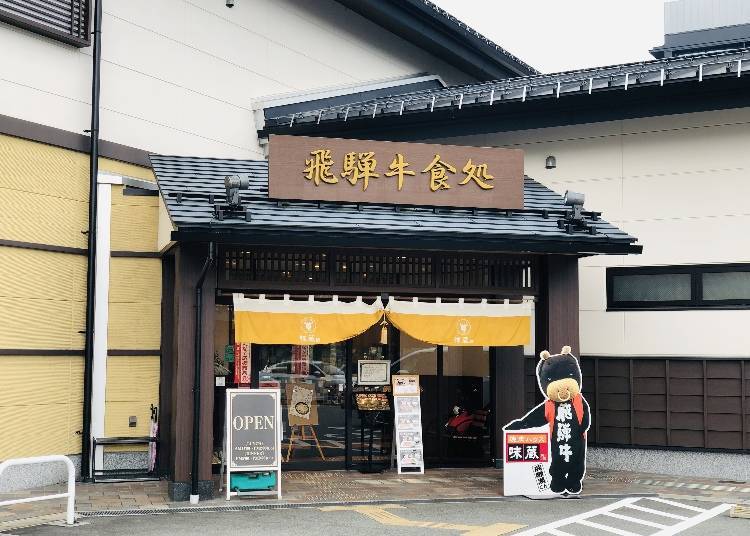 We also recommend Ajikura Tengoku, which is a one-minute walk from JR Takayama station. While many restaurants in Takayama serve Hida beef yakiniku or barbecue, Ajikura Tengoku is managed by the JA Hida Group -- an agricultural cooperative that sells agricultural and livestock products in the Hida region! This means that you can enjoy the legendarily delicious Hida beef at a reasonable price. 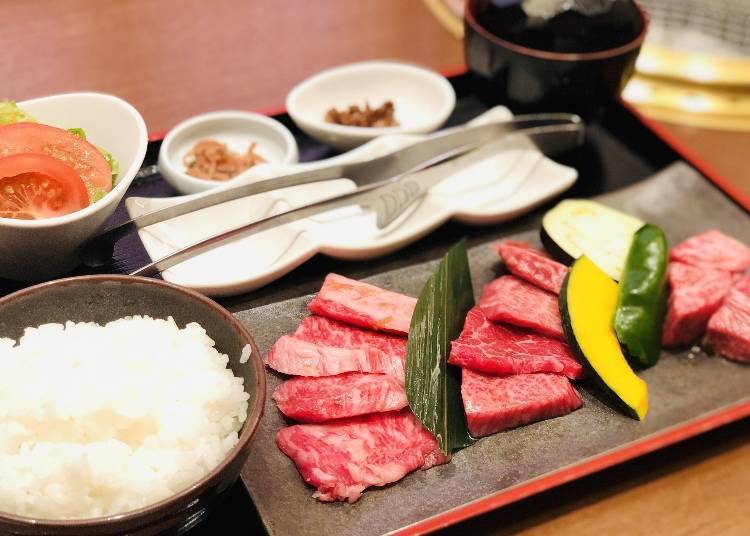 Aside from various steaks such as sirloin, tenderloin, and rib roast, they also have a wide selection of Hida beef dishes, including shabu-shabu and sukiyaki. Enjoy Hida beef to your heart's content. 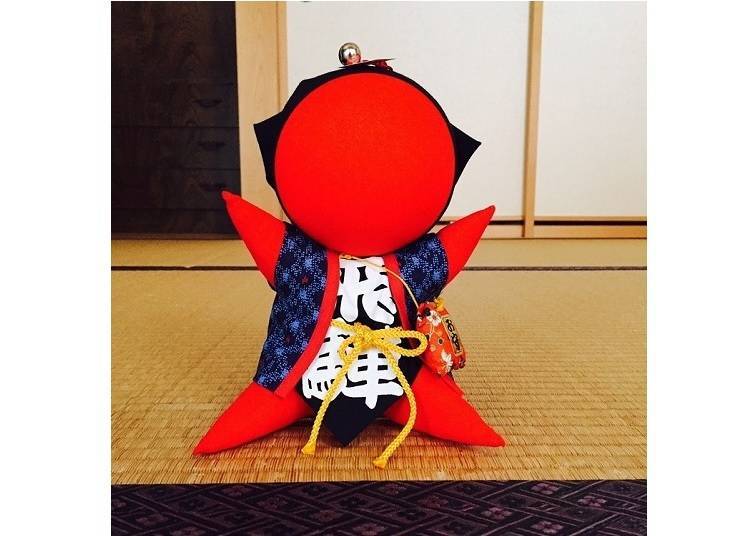 Sarubobo is a faceless red doll, which is a folk craft and iconic souvenir in Hida Takayama. Sarubobo is a word from Hida's dialect which means a baby monkey and is a charm for a safe birth and sound health.

This craft traces its origin from Hōko -- a doll in the shape of a child on its hands and knees that came from China during the Nara period (710 to 794). During this period, nobles decorated delivery rooms with sarubobo to pray for safe delivery. At present, as one of the symbols of Hida Takayama, this craft became popular as a decoration in several tourism spots and as a souvenir package.

13. Don't miss the panoramic view of the Hida Mountains aboard the Shinhotaka Ropeway 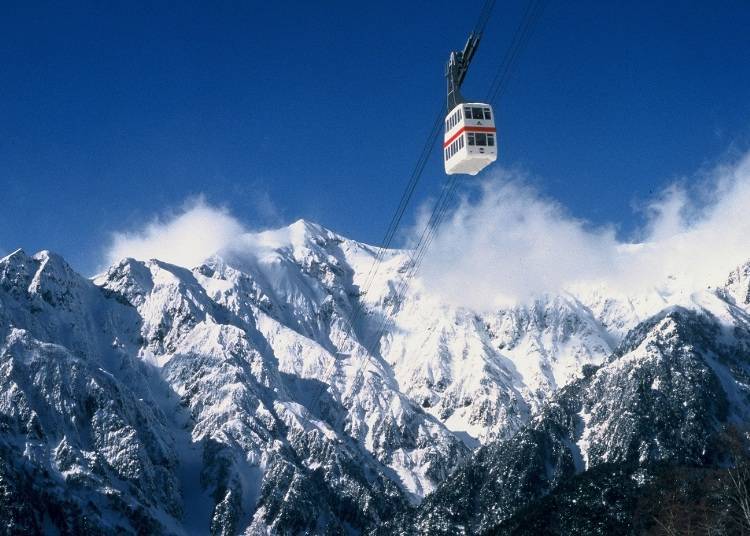 A stone's throw from the center of Hida Takayama and about 1 hour and 30 minutes by local bus from the Takayama Station lies Shinhotaka Ropeway. This is the only two-story cable car in Japan. You can go up to the top of the ropeway and enjoy the Hida mountains' panoramic view from an altitude of over 2000 meters.

You will see the marvelous view of nature from the mountaintop observatory on the Nishihotakaguchi Station roof, which is located at an altitude of 2156 meters. Enjoy the view of the mountains that changes with the four seasons. 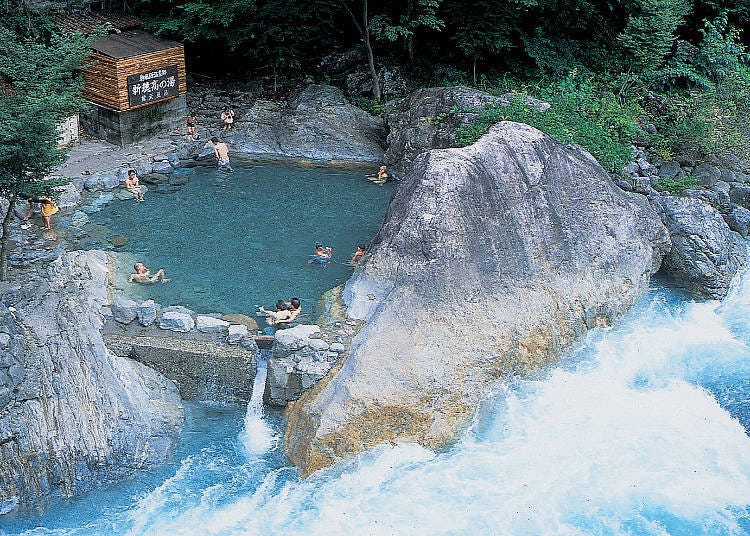 The Shinhotaka Ropeway is located in Okuhida Onsengo, which is further inside Hida Takayama. Okuhida Onsengo has five hot springs: Hirayu, Fukuchi, Shinhirayu, Tochio, and Shinhotaka. This is a secret onsen hot spring area nurtured by the Hida mountains' nature.

The hot spring inn is overflowing with a retro atmosphere. It is regularly frequented by patrons from all over the country. You can see the starry sky from the inn if the weather is nice. Be sure to visit this place if you happen to be in Hida Takayama.

Getting from Tokyo to Hida Takayama


Please be careful as large crowds are expected around Japan's long holidays such as Golden Week (early May), Obon (mid-August), Silver Week (late September), and the year-end and New Year holidays, as well as during the Spring and Autumn Takayama Festival (spring: April 14 and 15th, and autumn: October 9th and 10th).

Explore the wonders of Hida Takayama!

There are still a lot of charming spots and stores that were not included in our list. As an area filled with sake breweries, Hida Takayama's nightlife revolves around Japanese pubs called izakaya, bars, and even snacks!

Book an Adventure in Takayama

Browse & Book ▶ Popular Cultural Experiences in Gifu
*This information is from the time of this article's publication.
*Prices and options mentioned are subject to change.
*Unless stated otherwise, all prices include tax.