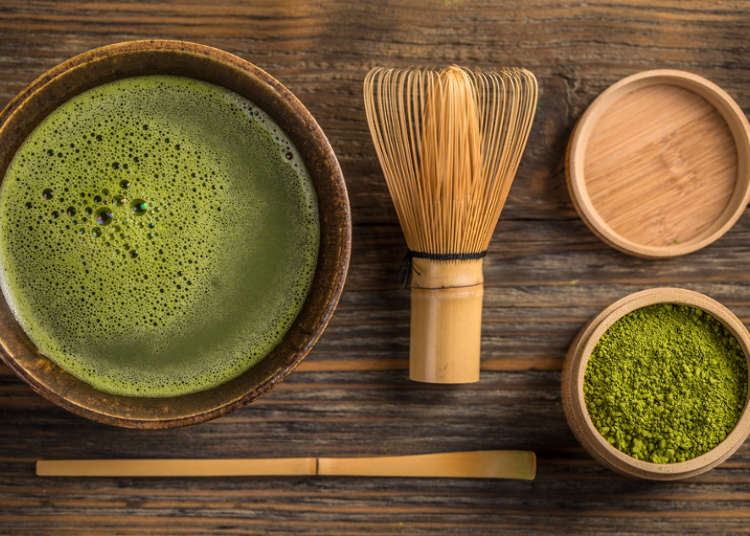 From a hot cup of creamy latte that is enjoyed in the café just around the corner to the expensive, high-grade tea powder sold in organic grocery stores all across the Western world, we are no strangers to the term “matcha” anymore. What has once been closely linked to the almost enigmatic rituals and traditions of the Japanese tea ceremony has begun its triumphal march into people's daily lives, not only in Japan but all over the globe. While some might see the green powder as a thing mostly enjoyed by hip cosmopolitans or health-conscious hippies, others have already claimed matcha tea for themselves. While the drink is only now becoming part of people’s dietary plan in the West, in Japan, hot and cold matcha tea can be found in every vending machine and no one thinks twice about it.

Matcha doesn’t only exist as tea, however. In Japan, it is an integral part of many a recipe, especially concerning sweets: pudding, cakes, cookies, sweet rolls, mochi, chocolate, biscuits, ice cream – there is no end to all the delicacies that can be enhanced with green tea powder. As opposed to the United States or Europe, for example, where matcha sweets are still somewhat of a rarity, Japan can look back on a century-long history with matcha.
*For matcha tea’s definition and types, production, preparation, and snacks and drinks, please scroll to the bottom of this article.

The History & Philosophy of Matcha 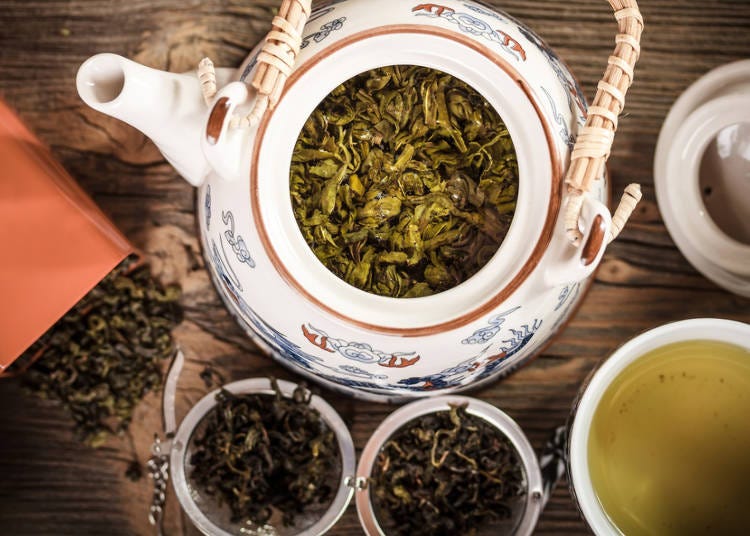 Matcha’s history starts, of course, with green tea. There are various legends and theories surrounding how the making of tea was discovered but one of the most prominent stories is the one about Shennong. He is a mythical Chinese emperor that lived in ancient times and is believed to have brought the principles of agriculture to the Chinese people – as well as to have discovered tea.

One day, Shennong was boiling hot water over a fire for later use, and as it happened, the wind blew a few leaves of a nearby bush in Shennong's kettle, coloring the water and giving it a rather distinctive aroma. Curious, Shennong tried the water nonetheless and found the taste of it quite enjoyable. The plant that the leaves were from turned out to be a tea bush.

Not only was the taste good, however. According to the legend, Shennong discovered the various curing abilities of tea, experimenting with all kinds of herbs and plants, testing their effect on his own body. As such, he is often depicted chewing on an herb or tea leaves on old scrolls and pictures. Following the Shennong legend, the history of tea can be traced back to 2737 BC, the year in which the mythical emperor discovered tea. While it cannot be proven whether the legend has actually taken place like that, it can be said that tea as a beverage has a history of around 4,000 years.

From China to Japan 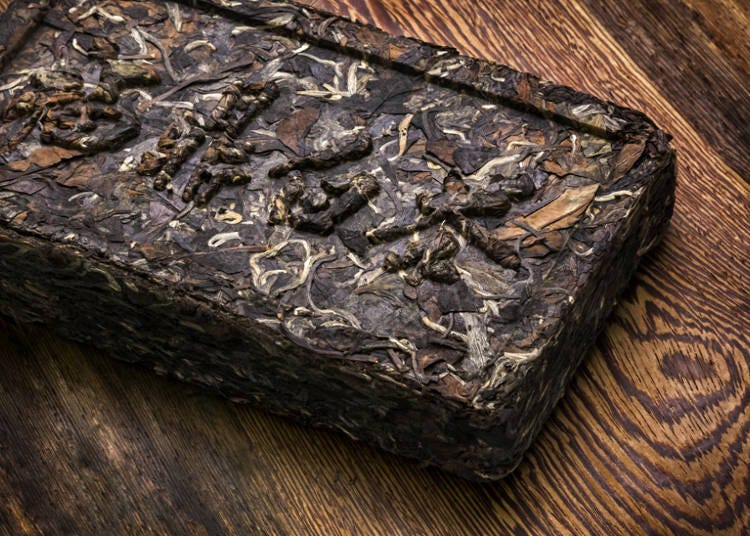 The first form of powdered tea, and with that the first steps towards today’s matcha, was created in China’s Song Dynasty (960 ~ 1279). To make harvested tea easy to transport and to shield it from rot, steamed and then dried tea leaves were ground into a powder which was then pressed into bricks. In this form, it could be easily carried around, either for travel or for transportation to markets all across China and beyond. The powdered, pressed tea didn’t spoil.

In the 9th century, the famous Buddhist scholars Saicho and Kukai are believed to have brought the first tea seeds to Japan from excursions to China, while another monk called Eichu is often credited with making green tea popular among Japanese royalty. Eichu is said to have served it to Emperor Saga himself. The Emperor liked the beverage so much that in 816, he ordered green tea plantations to be cultivated in today’s Kansai region. The tea that the monarch was served wasn’t matcha yet, however.

From Green Tea to Matcha 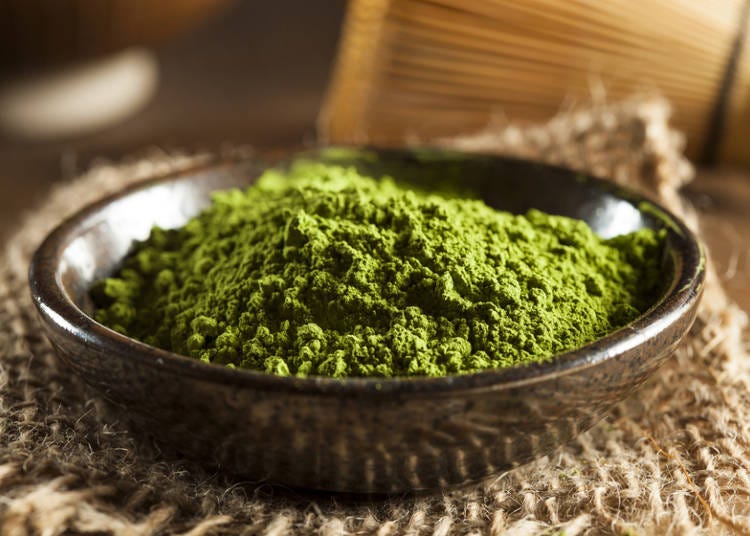 The story of matcha starts a few hundred years later. Like so many other traditions and customs of old Japan, matcha can trace back its roots to Buddhism – to Zen Buddhism in particular. It was a monk of the Tendai sect called Myoan Eisai (1141 ~ 1215) who traveled to China in 1187, only to discover two things: tea seeds and Zen scriptures. The monks in China were the first to discover the concept of powdered tea. Breaking off a chunk of a green tea brick that was then turned to a fine powder with mortar and pestle before whisking the powder in hot water made for a tasty beverage that helped the monks stay awake during their long sessions of meditation. But while tea powder was given up on in China at some point, the concept was particularly embraced by Japanese monks.

Eisai wrote a book not only about how to drink green tea but also about various health benefits and positive effects on the human body, called the kissa yojoki (喫茶養生記), or “On Drinking Tea for One’s Health”. The very first sentence of Eisai’s book states the following: "Tea is the ultimate mental and medical remedy and has the ability to make one's life more full and complete."

It is obvious how highly Eisai thought of the green tea powder, an explanation as to why the beverage has become so popular among the wealthy shortly after its introduction. By the 15th century, the consumption of matcha had become infused with the philosophies of Zen Buddhism – sado (茶道), the Way of Tea or simply the tea ceremony, was born.

Sen no Rikyu, the Master of Tea 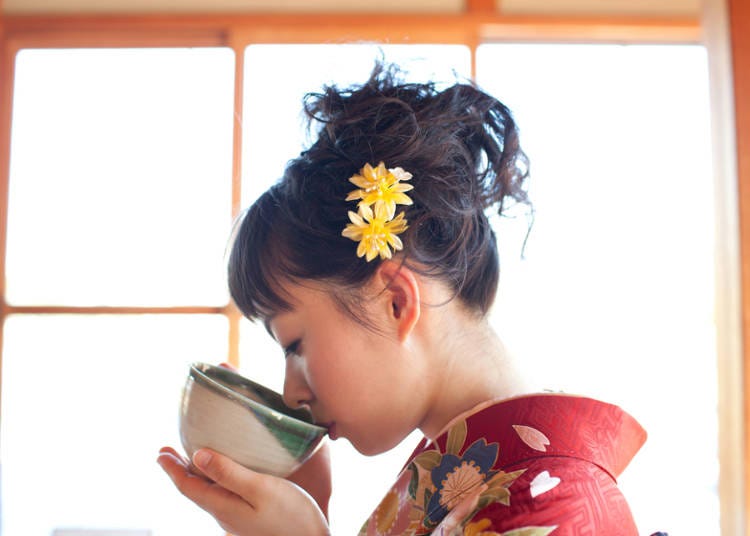 This ritualized and focused way of making and drinking matcha had spread to Japanese nobles and samurai by the 16th century, who often employed tea masters to take part in the art of tea. One of the most influential figures when it comes to sado is Sen no Rikyu (1522 ~ 1591). After studying tea and Zen principles in his early life, he became the tea master of the famous samurai Oda Nobunaga in 1579 and was, after Nobunaga’s death, employed by Hideyoshi Toyotomi. The tea master infused the ritual of drinking tea with four main principles: harmony, purity, tranquility, and respect.

Sen no Rikyu’s philosophy and teachings about the tea ceremony are the foundation for three major iemoto (家元, head houses) of sado: the Omote-senke, Ura-senke, and Mushakoji-senke. These houses carry on his legacy to this very day, emphasizing Rikyu’s focus on the mental and spiritual aspect of the tradition. One of his most famous sentences regarding the tea ceremony, specifically regarding the equipment that is used for it, is: "Though you wipe your hands and brush off the dust and dirt from the vessels, what is the use of all this fuss if the heart is still impure?" 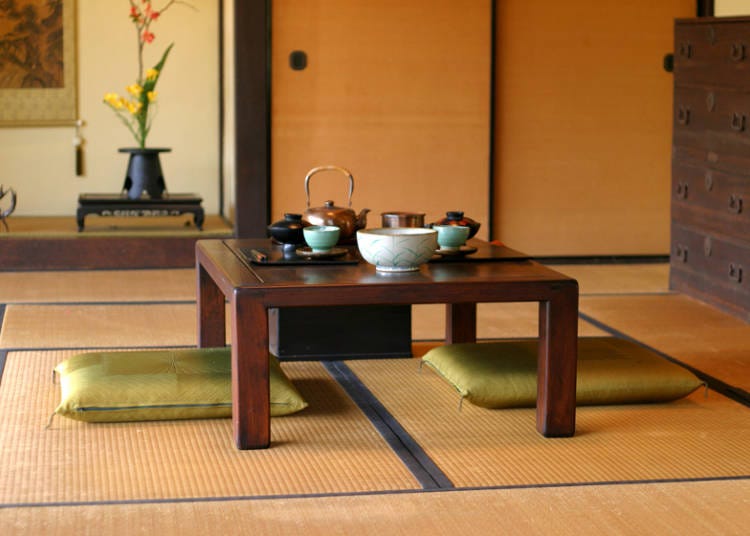 For a while, the tea ceremony was the only occasion on which to enjoy matcha and, therefore, a privilege of the upper classes. With progress in production and processing, for example by Soen Nagatani who is responsible for the now famous Uji matcha, the precious green tea powder became available to the Japanese public and while still being closely connected to the tea ceremony, matcha became more than a noble, ceremonial beverage for the noble and wealthy.

Today, matcha is enjoyed for all kinds of occasions, casual as well as formal, from PET-bottles as well as from intricate tea bowls. Let’s take a closer look of what matcha means, what it looks like, and what it is used for in modern Japanese society:

Matcha: Definition & Types
Matcha: How Powdered Green Tea is Produced
Matcha: the Preparation of Japan’s Green Tea Powder
Matcha: Snacks and Sweets
*This information is from the time of this article's publication.
*Prices and options mentioned are subject to change.
*Unless stated otherwise, all prices include tax.