HOME Purikura: Change Yourself Up with Photo Booth Fun! 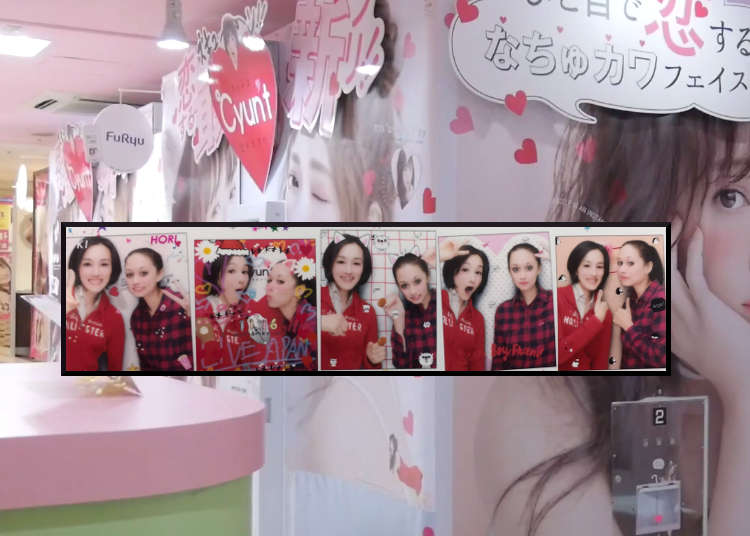 Purikura: Change Yourself Up with Photo Booth Fun!

You simply cannot take a trip to Japan without trying one of the mega-popular sticker photo booths known as purikura! For just a few hundred yen and a few minutes, you can take home a souvenir that is as fun to make as it is to share. Purikura isn’t just about the final photos, but about the experience and fun of posing and decoration. This is not your average photo booth!

LIVE JAPAN took a visit to the purikura area of the Taito Station game center in Shinjuku to try purikura for ourselves and to take you through the process step by step! 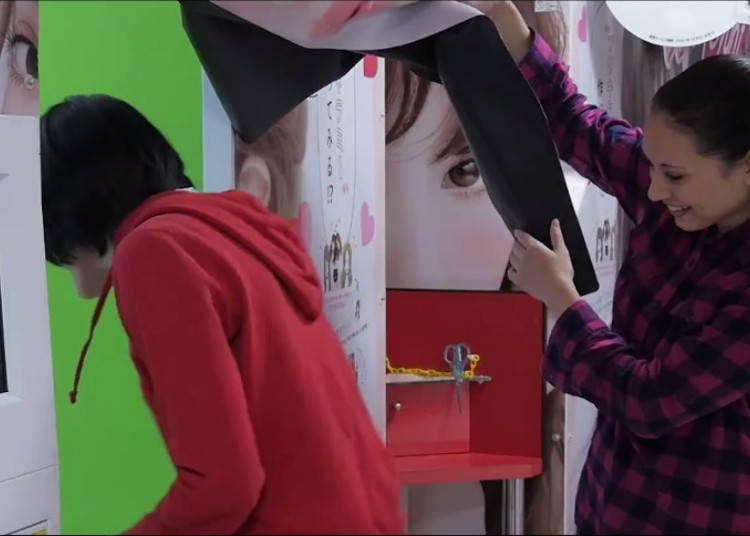 The word “purikura” is actually an abbreviation of “Print Club,” which can be used to refer to these special Japanese sticker photo booths, or the photos themselves. What differentiates purikura from regular photos is that they were designed with the idea of “beauty” being first and foremost. With special purikura technology, you can say goodbye to blemishes, and hello to a rosy-cheeked, soft focus fantasy land! The idea isn’t necessarily to get a realistic picture, but to become closer to looking like one of the impossibly kawaii models, whose faces cover the machines. Actually, for many, the allure of purikura isn’t just looking good, but capturing a moment in time with friends or a special someone. Quite a few people might also say that the best part of purikura takes place after the photos have been taken. That’s when decoration comes into play, but I’ll talk more about that in detail further on.

First, a bit about the history. The first purikura machines were developed in the mid-90s, combining photos and stickers to create a hit that Japanese girls couldn’t get enough of! According to Japan Amusement Machinery Manufacturers Association (JAMMA), during its peak popularity in 2002, Japan had over 36,000 purikura machines in existence–that certainly makes for a lot of sticker pics! As of 2010, the number dropped to approximately 15,000, which is still an impressive number of sticker photo machines.

Finding Purikura and Choosing a Machine

Purikura is all over Japan, but you may be wondering where exactly you can try purikura for yourself. You can easily find purikura machines in just about any arcade or game center. Larger game centers often have an entire floor dedicated entirely to purikura, featuring various machines offering their own unique styles. 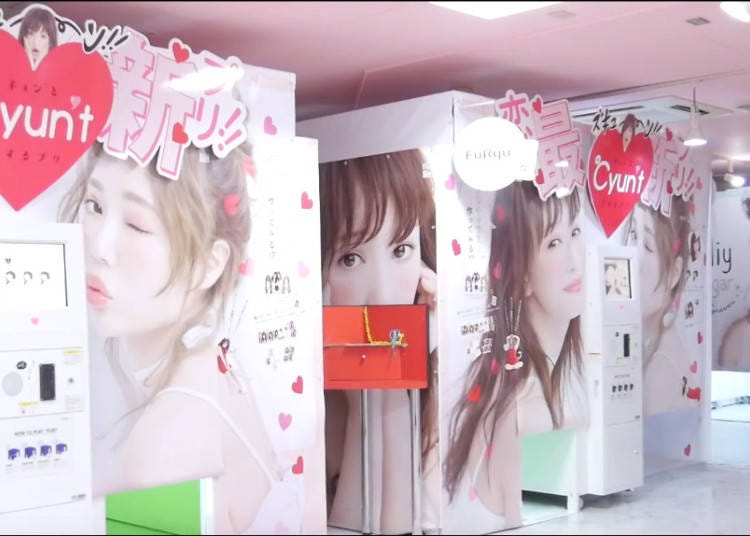 When we visited Taito Station, we chose what looked to be one of the latest purikura machines. “Cyun’t,” pronounced “kyun-to,” is an abbreviation of the machine’s tagline: “Cyun to koisuru puri,” meaning something like, “The purikura of ‘cyun’ and falling in love.” Cyun/kyun is an onomatopoeia for that tightening feeling you get in your chest when experiencing powerful feelings (pizza doesn’t count). It’s a word that often comes up in manga, which suits this machine particularly because it has an option that allows you to create your own manga-styled character (“puri kyara mi”). 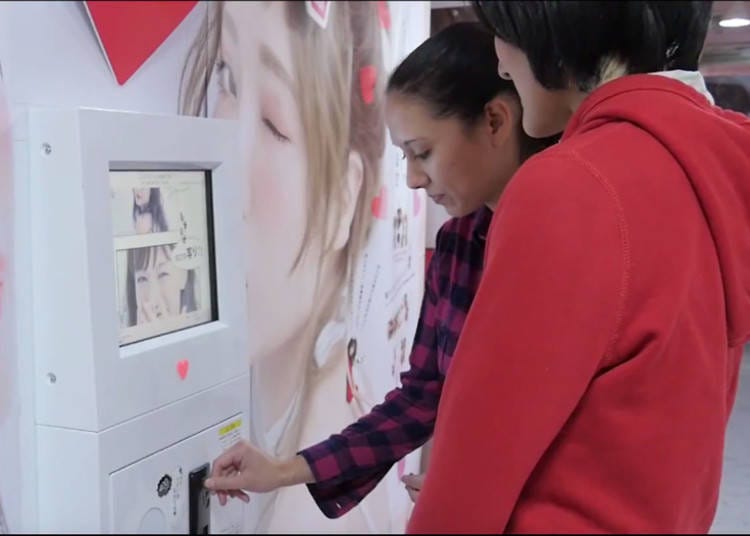 Once you have chosen your machine, the first step is to insert the appropriate amount of money into the slot. In our case, that meant a total of 400 yen, which is more or less, a typical price for purikura. Next we chose the number of people who would be photographed. The options given were for two people, or a group of three or more. (However, there’s nothing to stop you from getting a purikura with just yourself if you really want one!) After choosing the pair selection, we were then asked to select if we were male or female. I’ve never seen that choice before, and as we are both women, I am still not sure if that option is related to the poses given, the special effects, or something else. (It turns out, that by choosing the 「men」 choice, a male character can be created.) 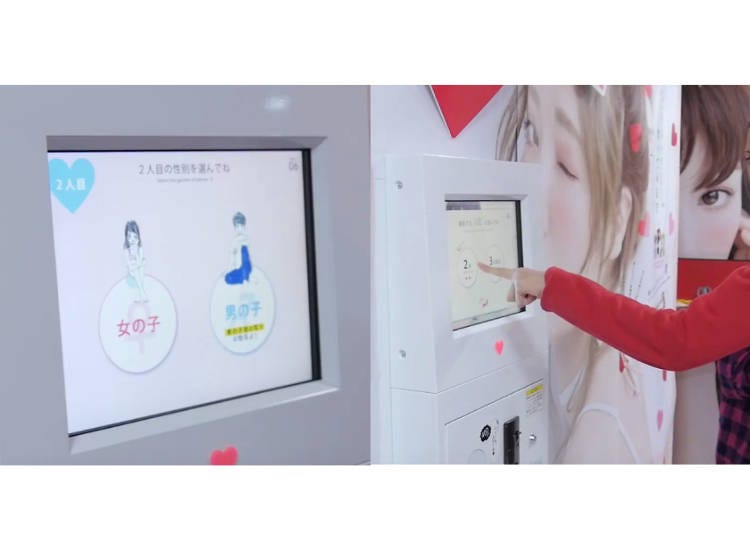 We could also make our own purikura character by choosing from some hairstyles, as well as a couple of other options. Sometimes machines will give you certain options to choose from beforehand, such as whether you’d like a ‘cute’ or a ‘cool’ look. Even if you don’t understand all of the options, there is no need to panic because in the end, there really isn’t a wrong choice. After that, we stepped inside the booth for picture time! 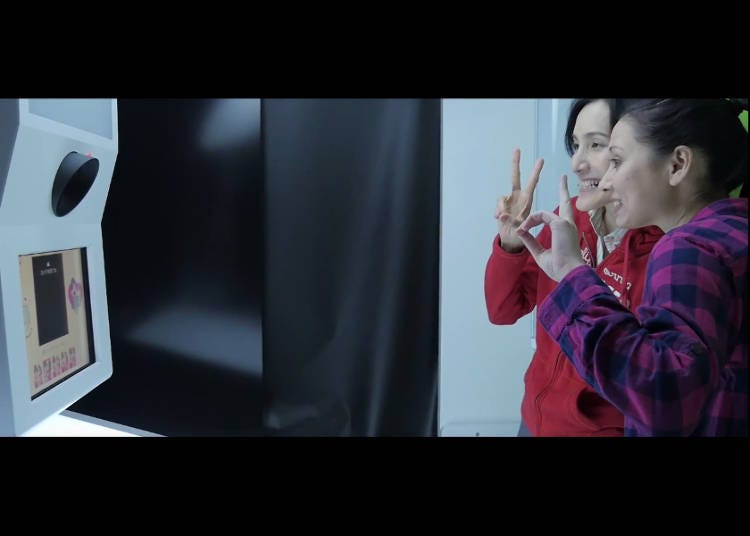 You may think that getting your picture taken is as easy as looking into the camera and saying “cheese,” but purikura takes it to an entirely new level! Entering the booth is a bit like stepping into an anime. Loud J-pop style music plays, while a cheerful voice shouts out orders: “Look into the camera! 3...2...1!” The camera will take a designated number of photos, and between each one, models on the screen will demonstrate a pose that you are meant to imitate. 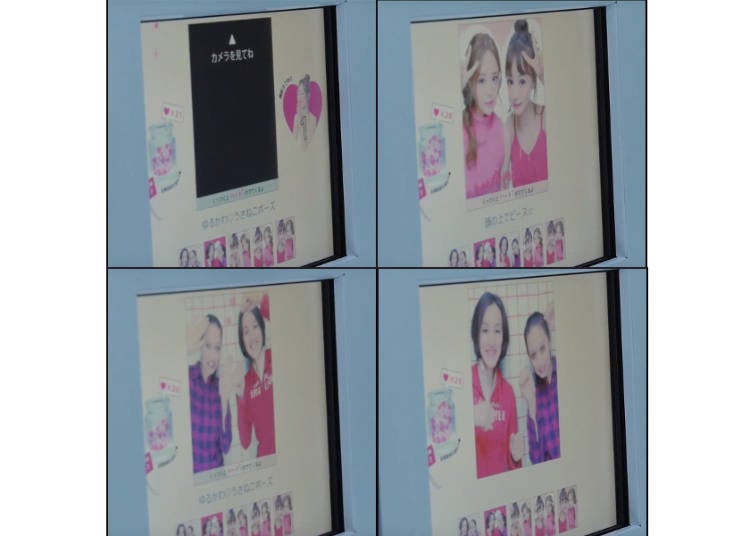 Of course, you can always add your own style. The point is to have fun. Be aware however, that you aren’t given much time to strike your pose, which can lead to some pretty interesting (and often hilarious) results, though some machines will allow for re-shoots. 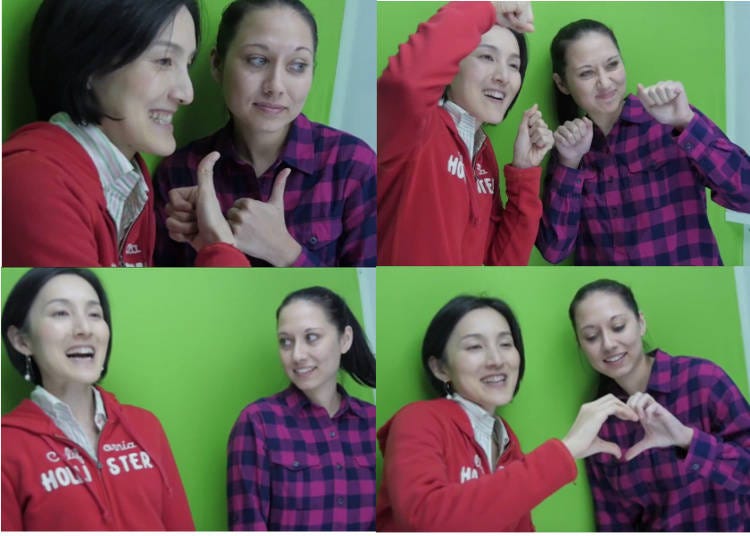 Among the ‘kawaii’ poses that we were meant to be making, were kitty cats and the shape of a heart. In the end, our posing may have been more silly than glamorous, but we had such a good time, it didn’t matter to us. 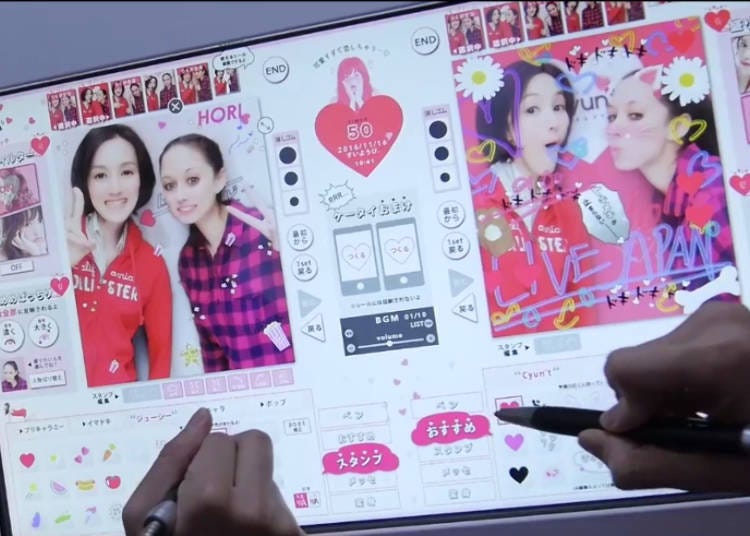 After the excitement of pretending to be fashion models had finished, the screen insisted we exit the booth to the final step: decoration! Just around the corner, attached to the same booth we had taken our photos in, was another, smaller booth where we could further edit our kawaii-ified pictures. We were able to choose our preferred degree of eye enlargement (a standard purikura feature), as well as our favorite pictures and desired layout. 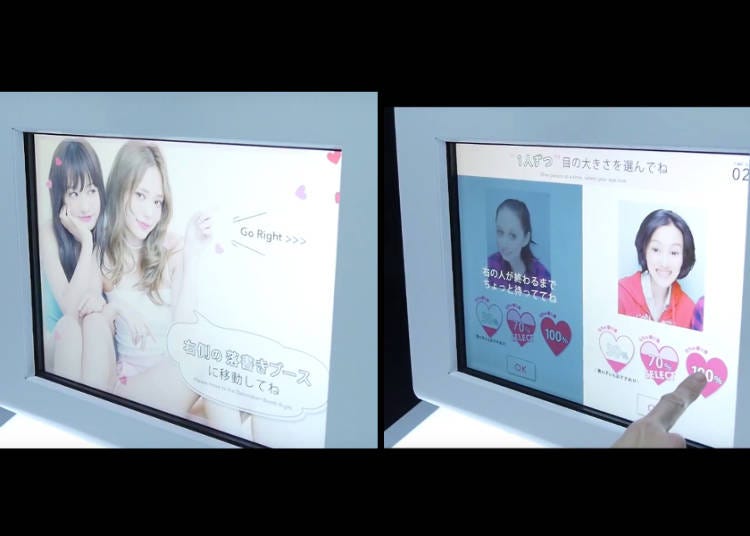 Once again, we were faced with a ticking clock, counting down the time we had left to decorate. The number of stamps to choose from are overwhelming, with everything from animals, food, sparkles, and so many more that I cannot even remember! Of course, you can draw freely, or write a message, as well as choosing from any of the dozens of pre-made messages in both Japanese in English. Now is the time to let your creativity loose, or just go wild with the touch pen–whatever works for you! 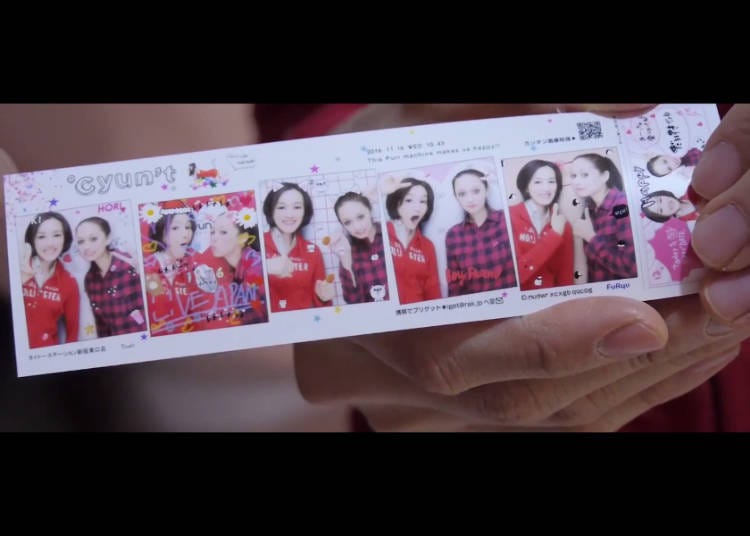 After your time is up you must exit to the outside of the machine where you can pick up the prints. If you want to divvy up the pictures before you leave, look for a table, where you will find a pair of scissors so that you can cut the photos, and stick them to whatever you like! If you visit Japan, be sure to give purikura a try!