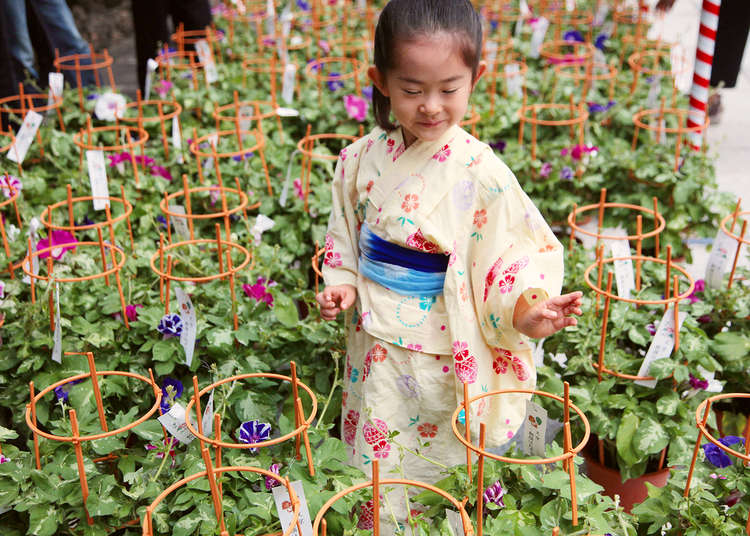 Summer is a colorful season in Tokyo, and just as the hydrangeas begin to fade, spectacular flower markets begin to open around the city. In particular, two seasonal flowers - morning glories (asagao in Japanese) and Chinese lantern plants (hozuki) come into bloom in the hot Japanese summer.

Ever since the Edo period (early 1600s to mid 1800s), flower markets showcasing these two beautiful varieties have been enjoyed in many areas around Tokyo. While you can of course buy plants at these markets, each is a kind of miniature flower festival in and of themself. With food and drink stalls as well as lines of blooming plants, the whole scene makes for a fantastic photo opportunity! So without ado, here are five of Tokyo's most popular flower markets! 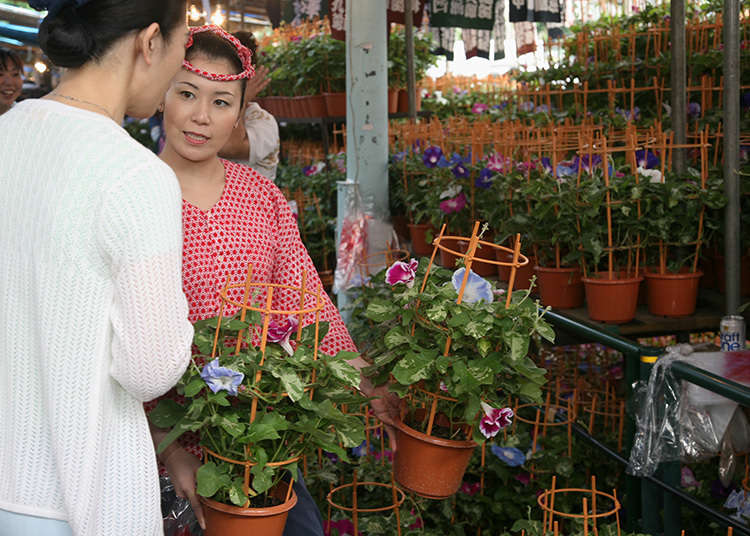 This festival is held in Taito-ku’s district of Shitaya, in the neighborhood of the Iriya Kishimojin, the temple of the same-named Buddha of children, their parents, and childbirth.

Around 120 asagao merchants and another 100 stalls crowd the area, attracting almost 400,000 visitors every year. Iriya’s asagao fair was a traditional event ever since the Meiji era but declined in popularity later on. In 1948, however, the festival was revived and has recently celebrated its 70th anniversary. 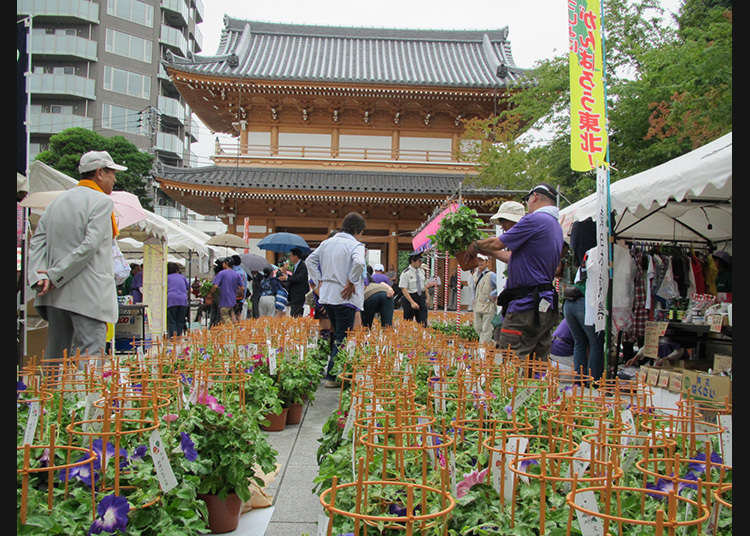 Colorfully blossoming asagao flowers occupy neatly arranged flower pots, all for sale at the Bunkyo Asagao Market. This event takes place place at Zenokji temple, which is only a one-minute walk away from the famous Denzu Temple.

Look forward to various events all around the neighborhood during the festival, such as an exhibition of exceptionally beautiful flowers that don't look at all like your regular Morning Glory flowers. The Denzu Temple, at which the market is being held, is connected to the Tokugawa family who were once the Shoguns of Japan. Tokugawa Ieyasu’s mother Odai-no-kata as well as the second Shogun Tokugawa Hidetaka’s daughter Senhime are buried at the temple. 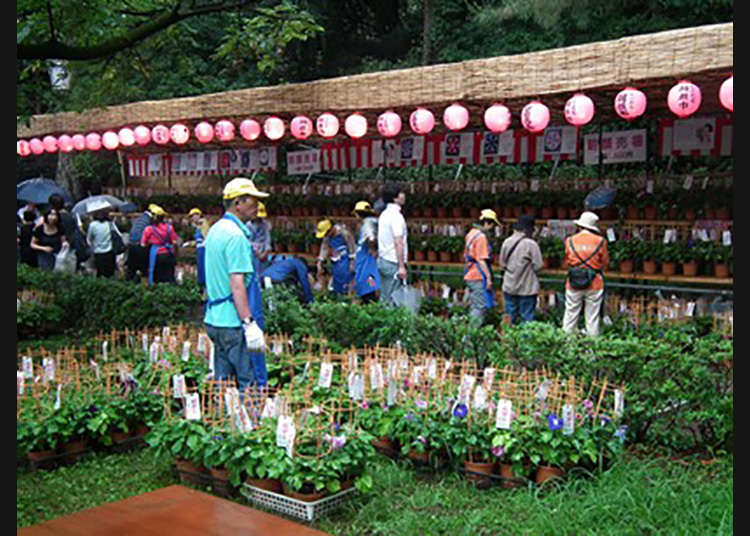 In the suburbs of Tokyo lies the city of Kunitachi, home to the Hitotsubashi University. The Kunitachi Asagao Market is held at the university’s southern main gate and the green belt of the university street. Around 2,000 different potted morning-glories can be found and purchased at this bustling market – all plants that are on sale were grown in the “Asagao Village of Kunitachi”.

The beautiful flowers aren’t the only wonders to be found here, however. Various traditional crafts and products, such as glass wind chimes or the produce of local farmers, are on display as well. The wind chimes jingle whenever a breeze is caught in them and they can often be seen hanging from the eaves of Japanese houses during the summer months. 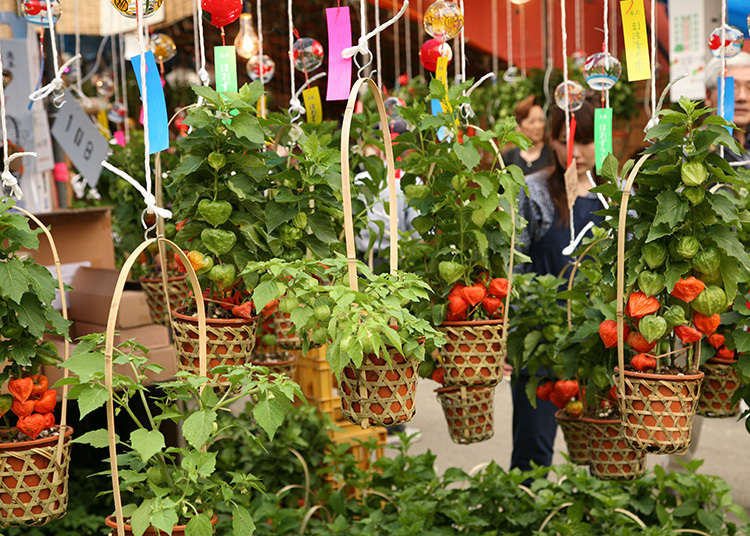 This hozuki market is being held at Tokyo’s oldest shrine, Senso-ji, which was constructed in the year of 628. Also called the “Kannon-sama of Asakusa”, the temple is one of Tokyo’s most popular tourist destinations. During the market, around 120 different shops line the temple grounds to present and offer their Chinese lantern plant varieties.

A lot of people enjoy this summer festival dressed in colorful yukata and it is said that if you visit Senso-ji on the 9th and 10th of July, divine favor equal to 46,000 temple visits will be bestowed upon you. Furthermore, kaminarijo, protection charms against thunder and bad weather in general, are sold only during these two days. 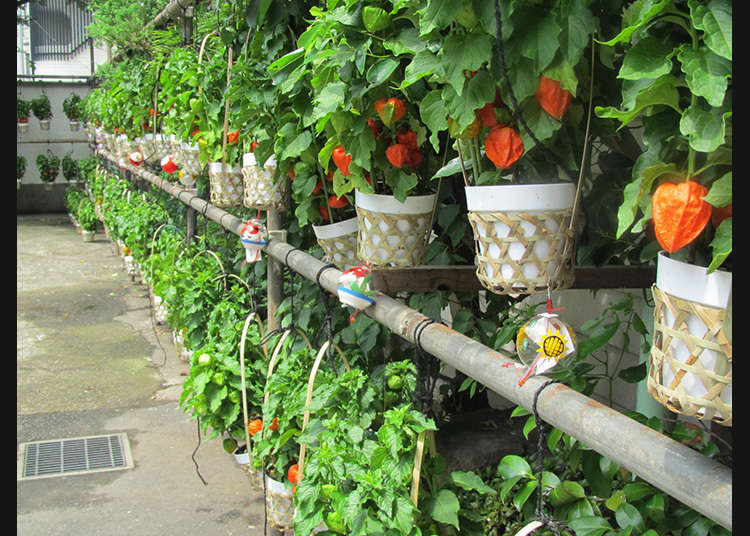 Beautiful vermilion-colored, potted hozuki are up for sale at the market taking place on the grounds of Genkaku-ji in Bunkyo District’s Koishikawa neighborhood. Genkaku Temple also goes by the name of Konnyaku Enma and has been believed to cure eye ailments since ancient times. Many people offer konnyaku, yam cakes made out of the konjac plant, to the statue of Enma on the temple grounds – Enma is the Buddhist lord of the underworld realm. Several events such as a stamp rally take place during the two days of the market, and look forward to snack on a variety of konnyaku snacks! 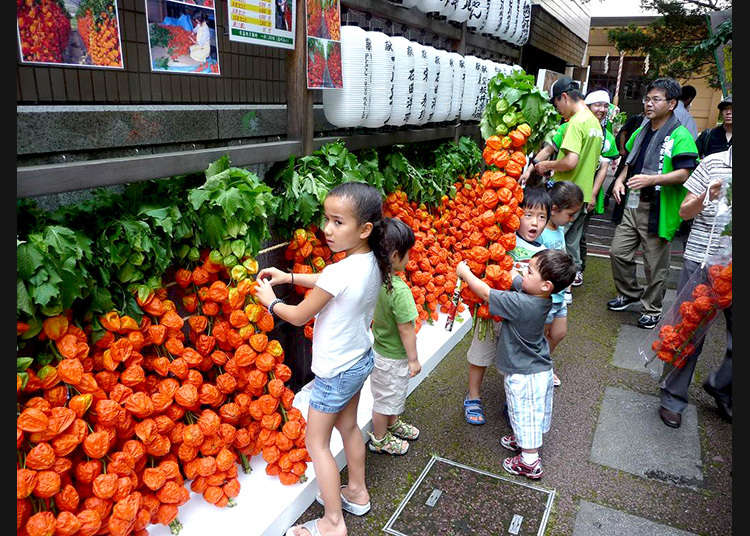 Minato-ku’s Roppongi also has its very own hozuki market, taking place at Asahi-jinja. Sponsored by the town of Hinokage in Miyazaki Prefecture, this market sells the famous hozuki products of this very area. The entire road leading up to the shrine is lined with Chinese lantern plants bearing fruit, often more than ten growing on one stem and the entire grounds seem to be dipped in a bright vermilion red color.

One characteristic of the Hinokage Hozuki is their size – the fruits are often bigger than 10 centimeters in diameter! Apart from these magnificent plants, Hinokage bamboo ware and other regional specialties are also exhibited – some things are even for sale. The Hinokage Kagura performances, a traditional and theatrical Shinto dance, are an especially interesting event that takes place during the market.