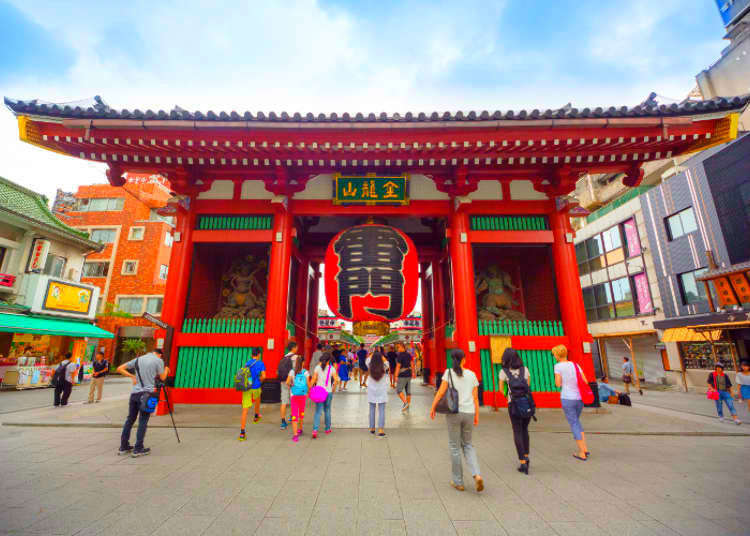 Sensoji Temple, located in the historic Asakusa district, is Tokyo’s oldest temple, founded in 628 CE. Many are aware that the very popular Buddhist temple is a landmark of the Tokyo area, but do you know the ins and outs of this iconic location? Learn more about Sensoji Temple, and also how you can make the most out of your visit. 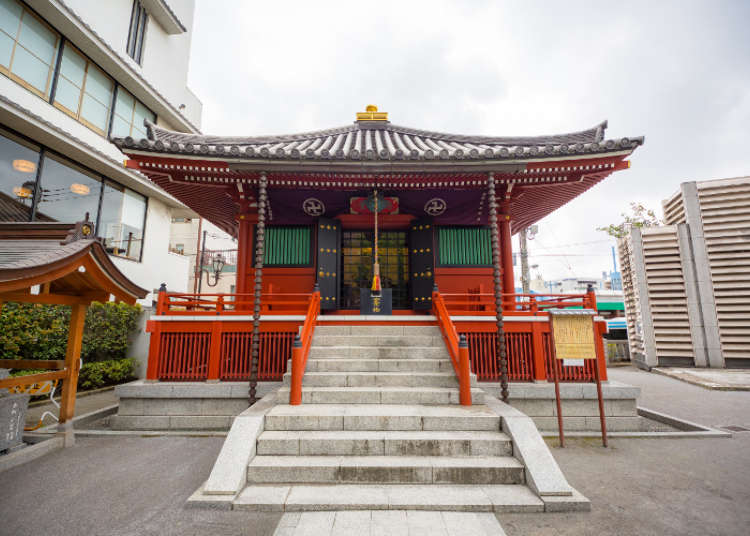 Located apart from the main premises is a small temple known as Komagata-do. This is a very historic spot. It has been said that roughly 1,400 years ago, during the time that Asakusa was a bustling fishing village, two fishermen pulled in their net a precious statue of Bodhisattva Kannon, the Buddhist goddess of mercy.

Komagata Temple was built on the very spot the statue was discovered. This is also near the original site of Sensoji Temple itself. Like some of the other buildings of Sensoji, Komagata-do has burnt down many times and rebuilt again. 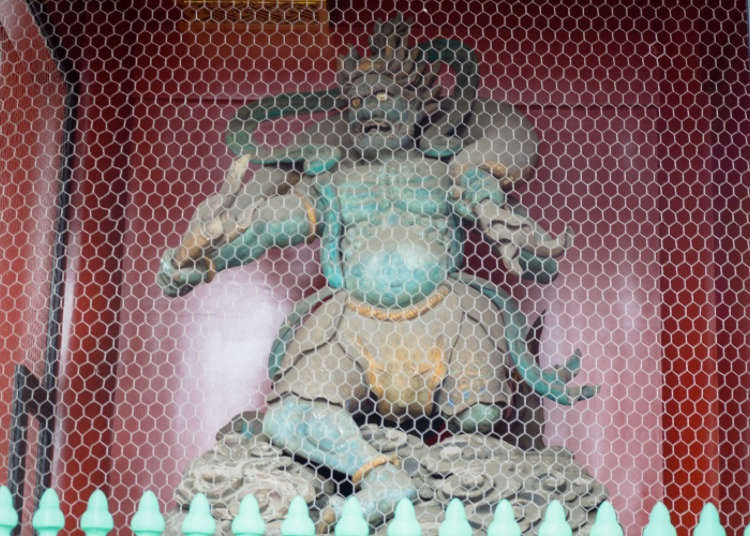 The vermillion Kaminarimon is one of the most recognizable parts of Sensoji Temple. While the massive lantern hanging from the center of the gate may be the first thing to catch your eye, take a closer look to its left and right to see two fascinating statues of Buddhist deities, Fujin and Raijin.

On the right side of the gate is Fujin, the god of wind, while on the left side, you’ll find the god of thunder, Raijin. The two gods are said to act as guardians of the temple, looking both noble, and fierce. Interestingly, the official name of the gate is not actually “Kaminarimon,” but “Furaijinmon,” after the two guardians. However, in English it is commonly known by its nickname, which translates to “Thunder Gate.”

The Mysteries of the Giant Lantern at Sensoji Temple 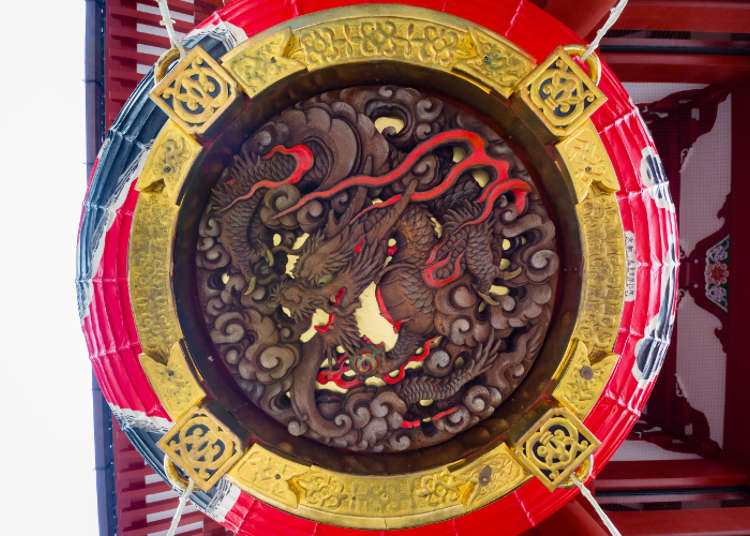 Kaminarimon’s lantern, or chochin, is about 3.9 meters tall, about 3.3 meters in circumference, and weighs about 700 kilograms (1,543 pounds). The kanji on the front of the lantern reads “kaminarimon,” while the gate’s official name “furaijinmon” is displayed on the back.

The current lantern is a restoration that was donated in 2003. Make sure to stop for a moment as you pass under the chochin and look directly above. On the underside of the lantern you’ll find an intricate carving of a dragon. 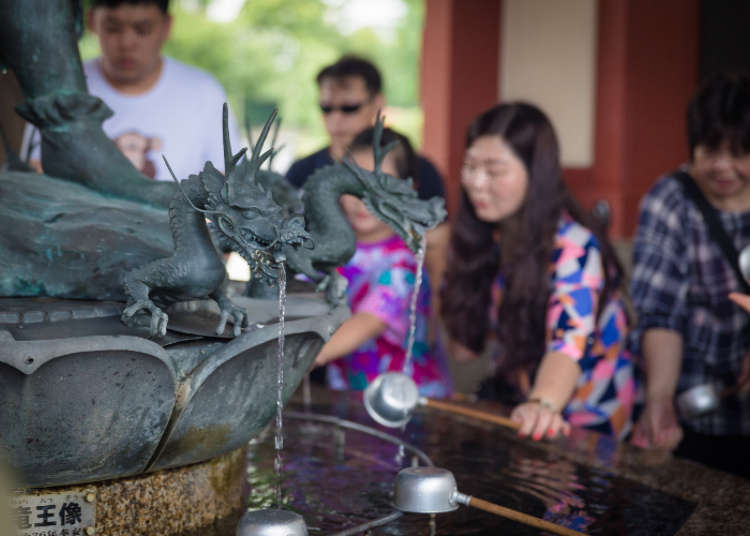 Before entering the temple itself, it’s important to follow the purification customs. Head towards the right of the Main Hall and make your way toward a fountain decorated in stone dragons. To begin, pick up one of the ladles, called chozuya, with your right hand and pour some of the water over the left hand. Next, repeat the process using the opposite hands. You may also cleanse your mouth by pouring a bit of water into your left hand, and bringing it to your face. Do not swallow this water; instead, spit it on the ground. You should use one scoop of water for the entire process. 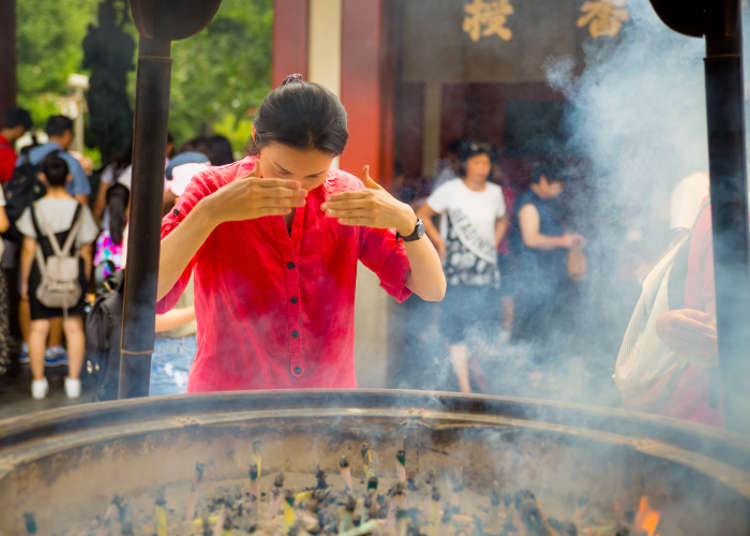 To further purify yourself, the soothing aroma to the large clay pot known as jokoro. A jokoro is a vessel inside which incense is burned. It is believed by some that touching the smoke with injured parts of the body may have a healing effect. You can see the Buddhist manji symbol on each incense stick. If you would like to burn some incense, you can purchase a bundle at one of the nearby buildings to the right of the Main Hall. 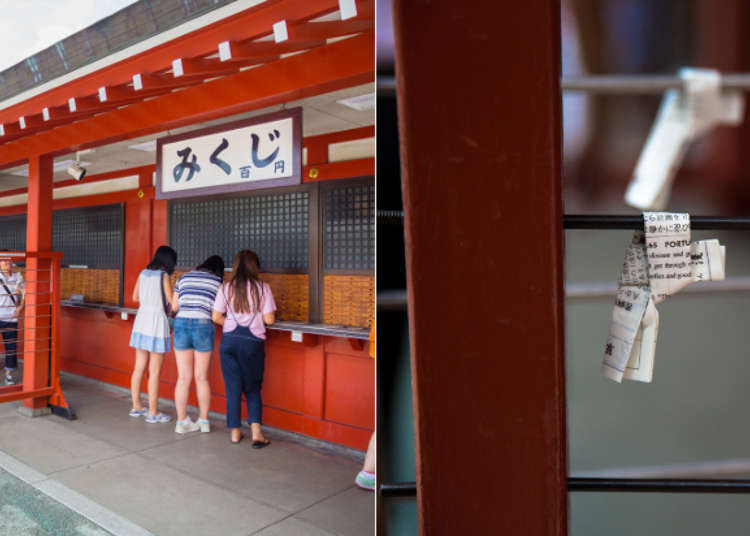 Another uniquely Japanese tradition that you can experience at Sensoji Temple is the drawing of omikuji, a fortune written on a strip of paper. There is a certain ritual to taking an omikuji. When you take a stick, read the number on it and place it back in the box. Then, find the corresponding omikuji from the nearby drawer.

There are seven types of omikuji that you can receive: Daikichi (大吉) stands for a large amount of luck, kichi (吉) for lucky,半吉 (hankichi) for half lucky, shokichi (小吉) for a little luck 末小吉 (raishoukichi) which is uncertain with a little luck. The worst fortune you can receive is kyou 凶.

However, even if you get the unluckiest of fortunes, you should not fret; neither should you be too carefree after getting a daikichi fortune.

The Sound of Sensoji Temple 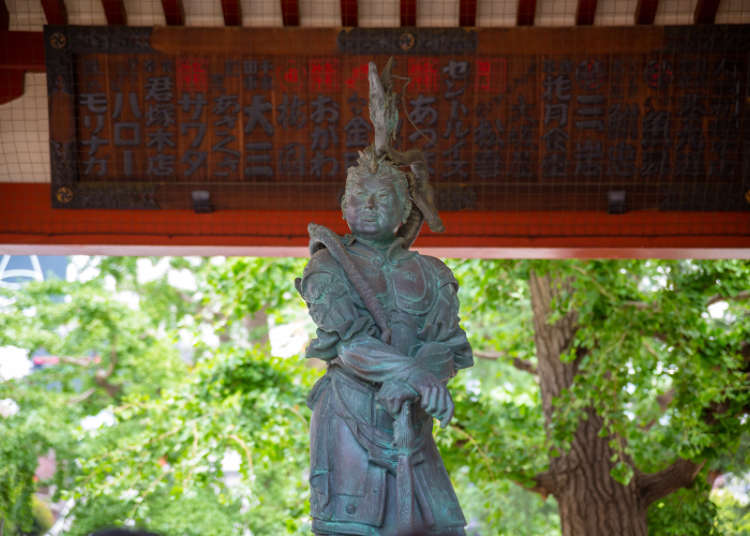 If you are staying right in Asakusa, there is a good chance you’ll hear Sensoji’s bell. During the Edo period, Sensoji Temple's bell would ring to notify people of the time These days, you can hear the ring just once a day, at 6:00 in the morning. However, during New Year’s Eve you can hear the bell chime 108 times, to break the 108 kinds of desire and greed that mankind is said to encounter, according to Buddhist belief.

See Sensoji Temple for Yourself 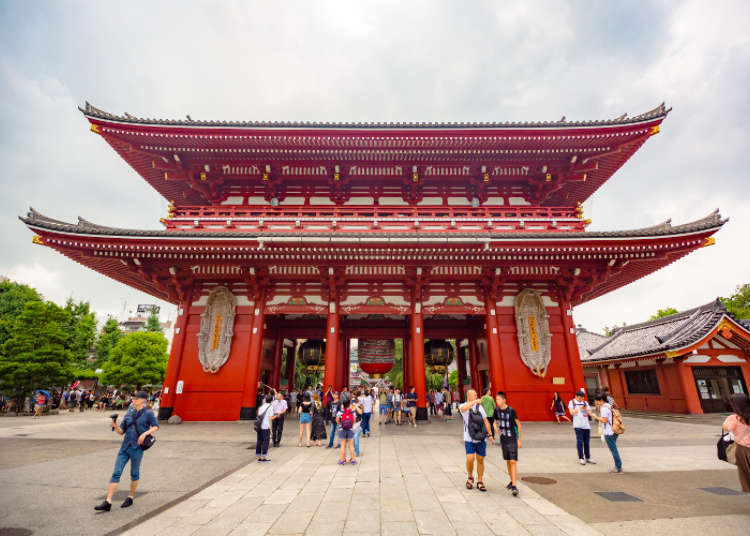 Now that you know all about what Sensoji has to offer, make the most of your next visit to Asakusa’s famous temple!

Experience Japanese Tradition! 5 Popular Kimono Rental Shops around Tokyo
Touring Tokyo's Asakusa Area with Kids: Essential Guide, Tips & Recommended Food Spots!
*This information is from the time of this article's publication.
*Prices and options mentioned are subject to change.
*Unless stated otherwise, all prices include tax.