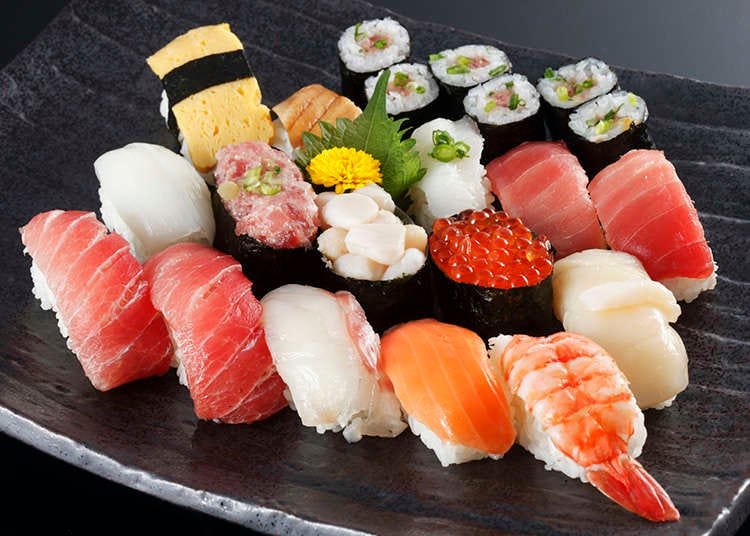 Sushi is basically vinegared rice with seafood on the top, or a mixture of the two. It is now popular popular all over the world and is seen as a typical Japanese food. The most common type is Nigiri, or hand-rolled sushi, which is rice rolled into bite-sized pieces, called Shari, and covered with a piece of seafood, called Neta. You can add a touch of wasabi (horseradish) and a very small amount of shoyu (soy sauce) to enhance the flavor of the sushi.

Look up establishments by Sushi

The History of Sushi 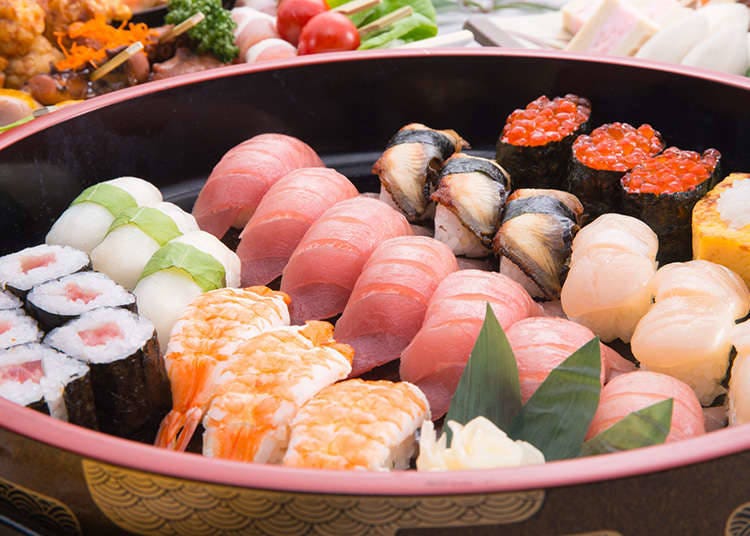 Sushi probably began with the custom of preserving food with fermented raw fish pickled with salt and rice, called “Narezushi”. It is said to have begun in Edo (old Tokyo) in the early 19th century. In the days before refrigeration technology, people would boil and pickle fish with soy sauce as a means of preservation. Although eating hand-rolled sushi was originally something for the common people and was sold cheaply at street stalls, it became more upscale over time, and today you can even find sushi served in rarified specialty restaurants for astronomical prices. 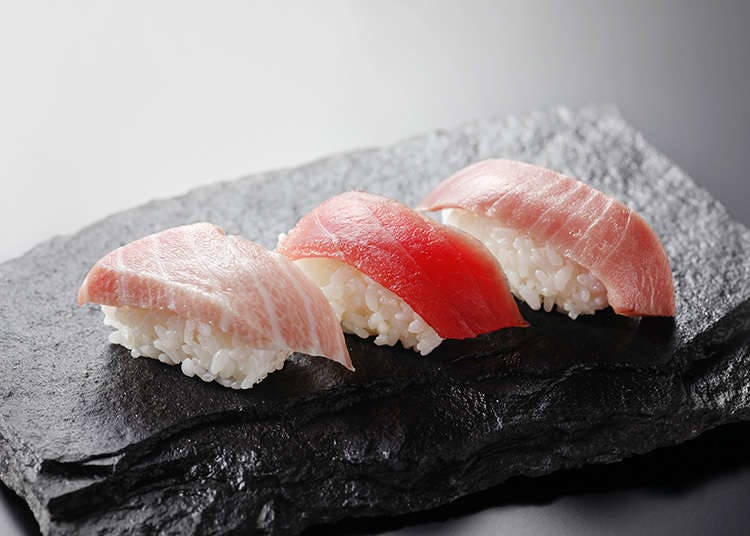 Red fish, such as tuna or bonito, are called akami, and the fatty belly of the tuna called “toro” is especially popular. White fish (shiromi), such as red snapper or yellowtail, has a more subtle taste. And fish with a shiny skin, such as sardines or mackerel, is called “hikari-mono” which literally translates as “shiny things.” There is even a way of cooking with vinegar that hides the strong “fishy” smell. In addition to the normal Neta, you might also find cooked conger eel or fried eggs, which shows that not all sushi is based on fish.

The varieties of sushi 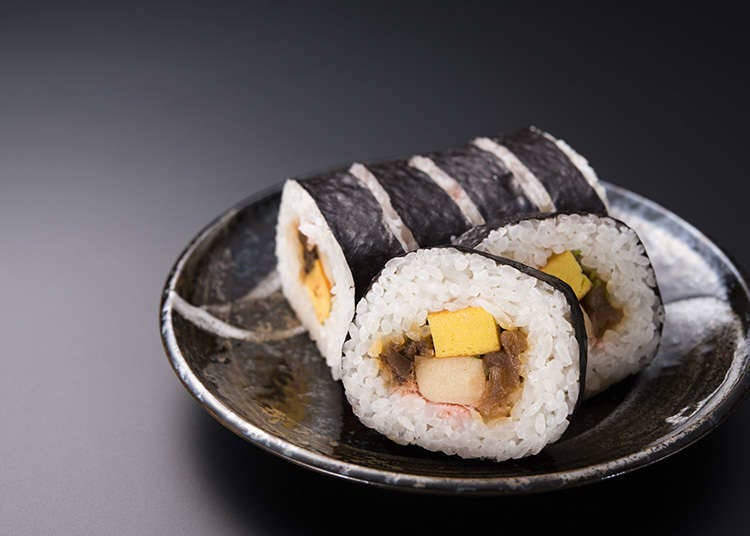 There are several types of sushi, for instance, Maki-zushi hand-rolled cones of rice and seafood wrapped in a piece of nori seaweed, and Chirashi-zushi which layers the sushi ingredients on top of a bowl of vinegared rice. Then there is Inari-zushi, rice wrapped in a thin layer of deep-fried tofu, which features a spicy-sweet taste. And there is Oshi-zushi, in which rice and sushi ingredients are forced into a box and hardened by the pressure. This type is often made in Osaka and Toyama Prefecture.

The Right Way to Eat Sushi 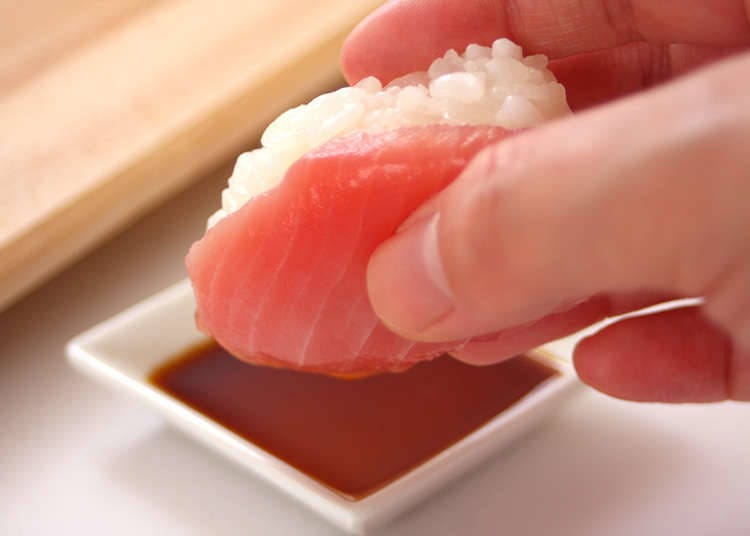 First, put a small amount of soy sauce into a small dish, then you can dip the sushi (NOT the rice) in it very lightly. Do not drown the sushi in soy sauce — just a small amount is enough. Many people ask if it is OK to eat sushi with your hands or if you must use chopsticks to be polite. The answer is that it is very acceptable to pick up sushi with your fingers, dip it bightly in soy sauce, and eat it.
Sushi restaurants also serve you thin slices of vinagered ginger called Gari, and a cup of green tea. People who really enjoy sushi often start with more bland-tasting Neta (such as shiromi) and move towards the more flavorful types of fish. Periodically, you can use a bit of Gari or green tea to freshen your mouth.

Places Where You Can Enjoy Sushi 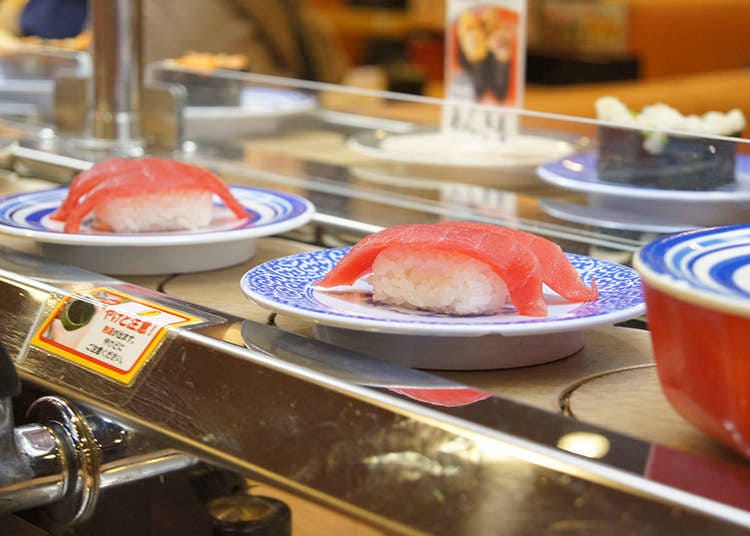 Today there are many places to enjoy sushi. For example, there is the standard sushi restaurant where you sit in front of sushi chefs at a counter, “a conveyor-belt sushi” restaurant where all sorts of sushi plates move around on a moving belt and you are free to choose whatever you want, and “delivery sushi,” where you order sushi at home and have it delivered directly to your door. Prices run from under 1,000 yen for packaged sushi at a convenience store to several thousand yen for a sushi restaurant, and even several tens of thousands of yen for a really high-end sushi restaurant in places such as Ginza.

Look up establishments by Sushi
[MOVIE] Uobei: High Speed Sushi with Multilingual Tablet!
*This information is from the time of this article's publication.
*Prices and options mentioned are subject to change.
*Unless stated otherwise, all prices include tax.