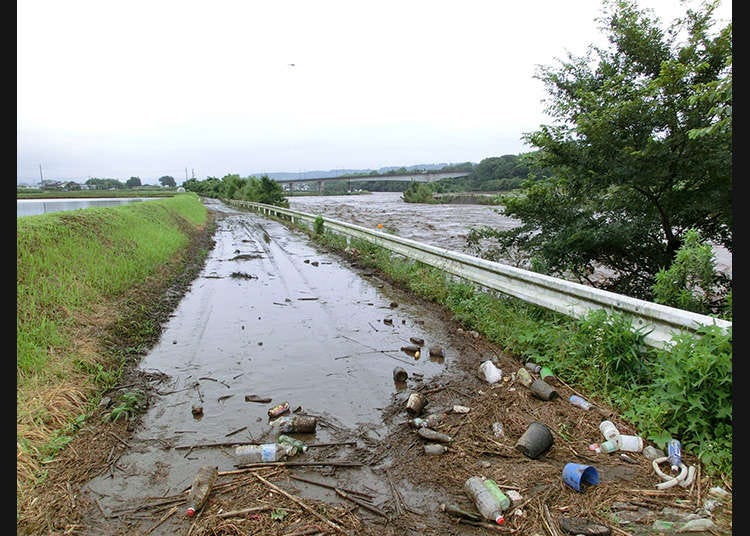 Due to Japan’s unique geography, the country is prone to a variety of natural problems, such as earthquakes and typhoons. This is no reason to worry, however, as centuries-long experience with all kinds of disasters has made Japan as prepared as any country can be. There are all sorts of security measures in place, and preparedness is key. Depending on what kind of natural disaster strikes, there are different rules regarding what to do and what you need to know. 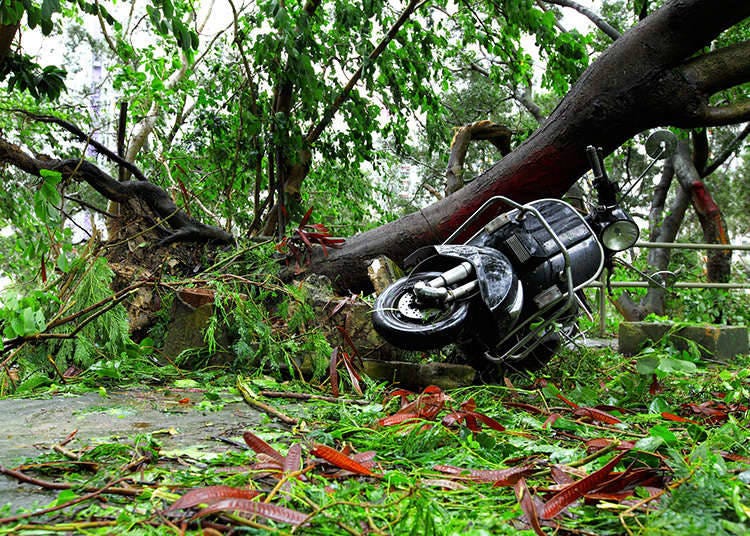 The phenomenon called typhoon is actually a large low-pressure system that forms over the Pacific Ocean – those that originate over the Atlantic Ocean are known as hurricanes. Strong winds and heavy rainfall are their hallmarks, and Japan experiences around eleven per year with just a few of them making actual landfall, mostly from summer through autumn.
These typhoons generally move from the southwest to the northeast, often becoming gradually larger, sometimes making landfall and sometimes running along the coast of the entire country. When visiting Japan around this typhoon season, it is important to check the forecast, as planes and trains may be delayed or even cancelled during a big typhoon.

What to Do When a Typhoon Approaches 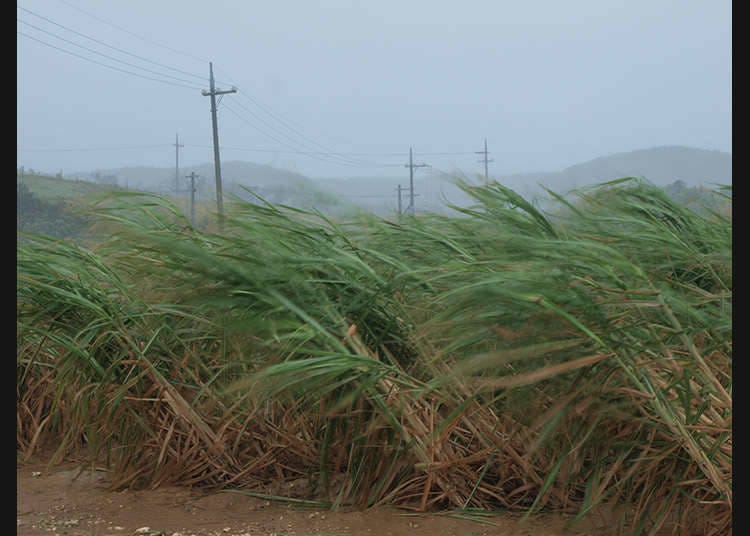 Following the news and weather forecast will help determine when it is safe to go outside again. It is most important to stay away from water, such as irrigation ditches, shores, and rivers.

The heavy rain might cause sudden flooding, and this isn’t just true of typhoons, but sudden downpours or general heavy rain are also dangerous.

Should the wind become extraordinarily strong, stay away from windows – flying objects might shatter the glass, causing a serious hazard to anyone inside. 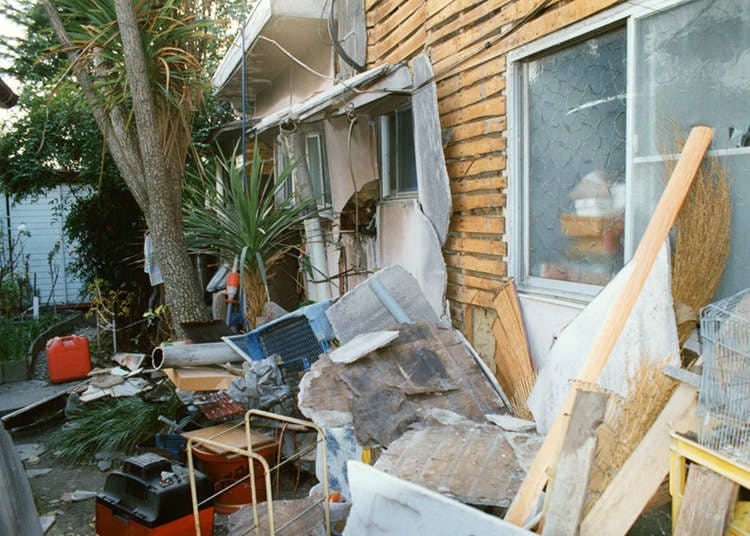 According to the Japanese Meteorological Agency, around 5,000 tremors occur throughout Japan each year, and 3,800 of those are between Magnitude 3.0 and 3.9. While most of those are so small that they can hardly be felt, bigger ones do occur once in a while. This large number of tremors is because of Japan’s geography: the islands sit on four different tectonic plates.
Japan has very strict building regulations and both excellent disaster prevention and response planning. As already mentioned in connection with typhoons, being prepared is vital when an earthquake strikes, so always knowing the nearest evacuation site is important. This information is readily available at hotel desks and police boxes, and is marked on every map. If you’re living in Japan or staying for a longer period, it is highly advisable to prepare a disaster kit that can be accessed easily and is stocked with food and water for at least three days, as well as a first aid kit and other essentials.

What to Do When an Earthquake Hits 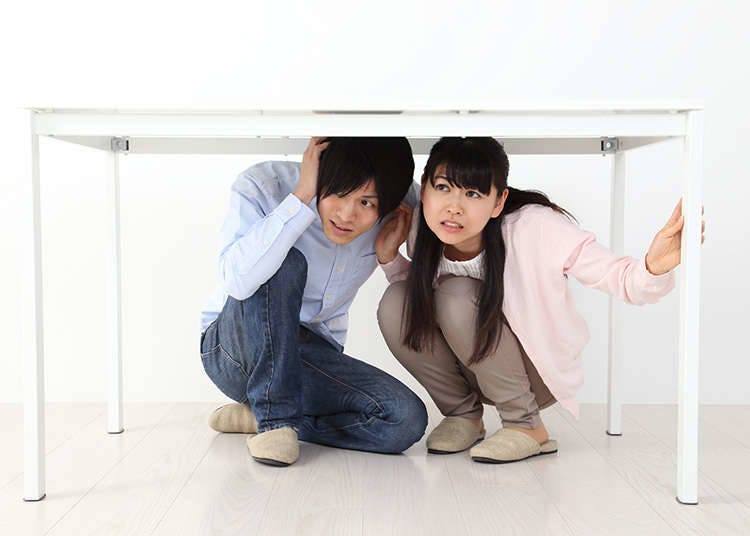 Unlike typhoons, earthquakes can only be predicted mere seconds before they hit. For bigger quakes, a warning will occur, via radio, on the TV screen, and as a mobile phone alarm.

・When you hear or see this alarm, the first important rule is not to panic. Dropping to the floor and covering your head comes next.

・Try to seek shelter underneath a table or similar protective shelter, but don’t go out of your way to reach it, as you might be knocked over by a jolt, or hit by a falling object.

・Additionally, stay away from windows, bookshelves, or similar things that might break or topple.

As already mentioned, modern buildings are designed to withstand even strong earthquakes, able to absorb the jolting and shaking without suffering major damage. Even if a building might ultimately collapse during an earthquake, the safest thing to do is not to run outside but instead stay put under a table – it is one of the most reliable shelters during quakes.

What to Do When a Tsunami Hits 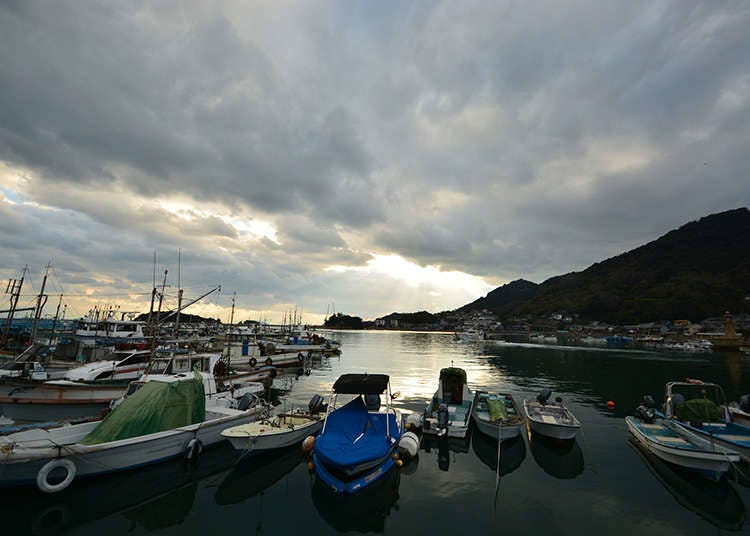 Earthquakes sometimes trigger tsunami, especially when the earthquake is very strong and the epicenter is deep down on the floor of the ocean. Tsunami warnings work the same way as earthquake warnings do, so make sure to look out for them after an earthquake, especially when you are in a coastal area. The first reaction to a tsunami warning should be to seek higher elevation quickly. While moving to higher ground and inlands is the optimal course of action, there might not be enough time. In this case, climb to the roof of the highest nearby building. If possible, make a conscious effort to stay away from other bodies of water beside the coast, such as lagoons.
Tsunami often come one after another, so do not make the mistake of retreating from your shelter too soon. The best course of action is to wait for an “all clear” from local authorities and, if possible, to follow the news via radio or other media. After that, head towards a designated evacuation area. 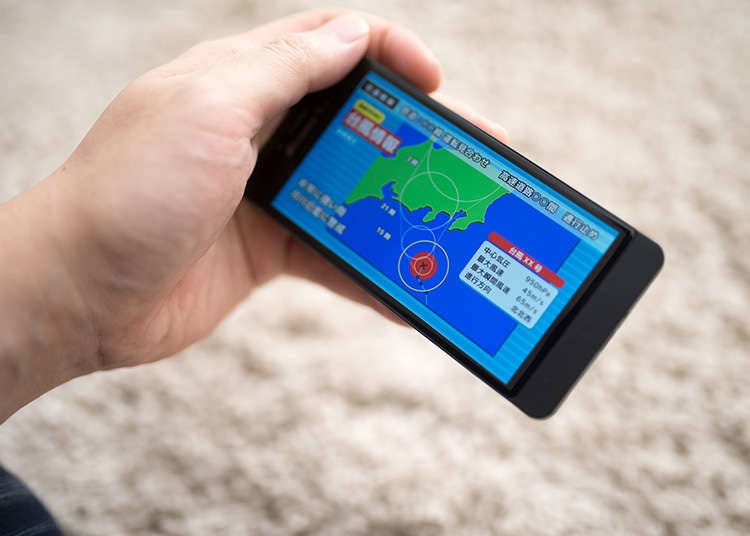 The smartphone app “Safety Tips” by RC Solution Co. is also an excellent source of multilingual guidelines for a lot of situations and disasters and also works as an additional smartphone warning system for earthquakes and tsunami. This app can be found at the bottom of LIVE JAPAN – just scroll down and look for the blue banner.
As already mentioned, because Japan has a long history of dealing with all kinds of natural disasters, it has developed both excellent disaster prevention and emergency response plans. Knowing how to react in the case of such an emergency is most important, so make sure to stay up to date and informed!

Emergency contact information in Japan
*This information is from the time of this article's publication.
*Prices and options mentioned are subject to change.
*Unless stated otherwise, all prices include tax.