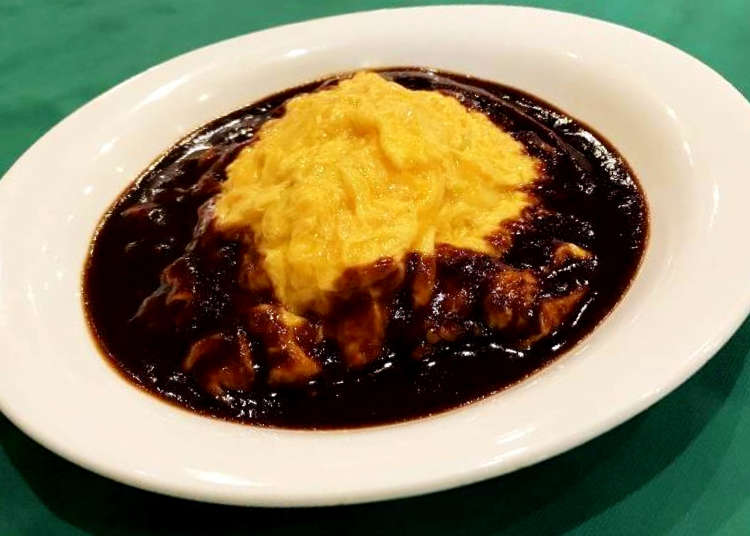 Born in the West, Raised in Asakusa: 3 Long-Established Restaurants Loved by Locals!

Yoshoku, the Japanese word for Western-style food, does not refer only to American and European dishes. It also refers to such dishes unique to Japan as omurice (rice omelet), ebi-furai (fried shrimp) and supageti-naporitan (spaghetti napolitan) popular with all Japanese. Here are three long-established Yoshoku restaurants located in “the people’s town” Asakusa and loved by everyone.

How did Yoshoku come about in Japan?

Asakusa has been a town known for its culture since Edo times. The west side of Sensoji Temple is an area lively with popular theaters ranging from those sponsoring rakugo (humorous storytelling) and manzi (standup comedy) in smaller places to larger halls offering popular theatrical performances.
This area is called Asakusa Koen Rokku (6th ward of Asakusa Park) and is one of the most populated sections of Asakusa. For centuries people have been attracted to this area popular for its many places to eat and drink offering all sorts of dishes that draw passersby in daily.
Yoshoku got its start towards the end of the 19th century. The Meiji Government, seeking to model its military after that of Europe, built its army and navy along those lines. At that time, the French and English military also brought their cooking with them and this is said to be when Western dishes were first introduced. Later Japanese began to experiment and make their own versions of Western style dishes, something which continues to this day. Until the Meiji period, there was almost no custom of eating beef and pork, so those items necessary for Western cooking were hard to come by. 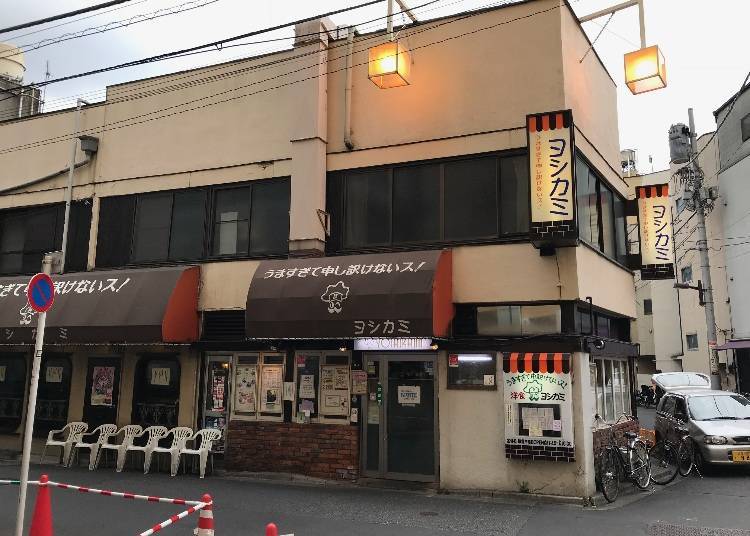 The shop is located behind Asakusa ROX

Yoshokuya Yoshikami is located one street back from the Asakusa Rokku-dori. Since its establishment in 1951 the shop has continued to offer Yoshoku dishes that satisfy Japanese palates which go perfectly with Japanese rice and sake. Efforts were put into giving it a unique flavor.

When you enter the shop you can see the kitchen area on the other side of the counter. For your first order try the pork sauté (1,500 yen). Simply seasoned with salt and pepper, the meat is fried in butter and salad oil, then further flavored with soy sauce, a major Japanese condiment, it gets its unique flavor. As soon as you order the dish is prepared before your very eyes. Seeing it prepared and enjoying the aromas wafting your way make for a mouth-watering experience. 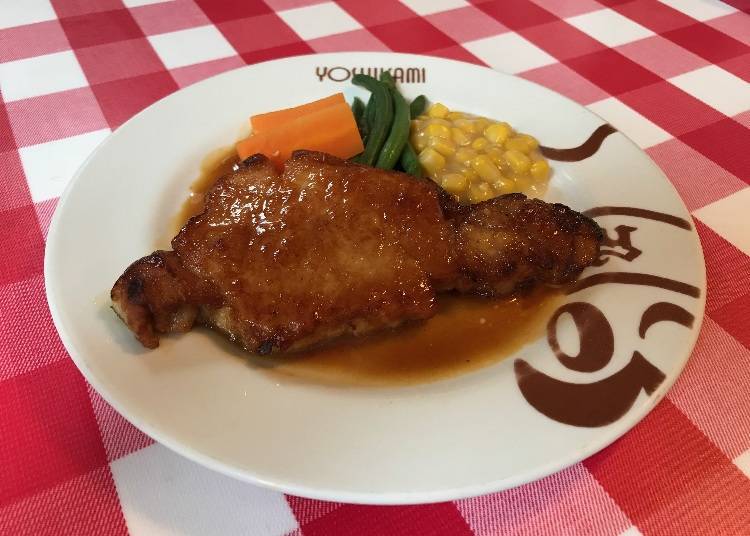 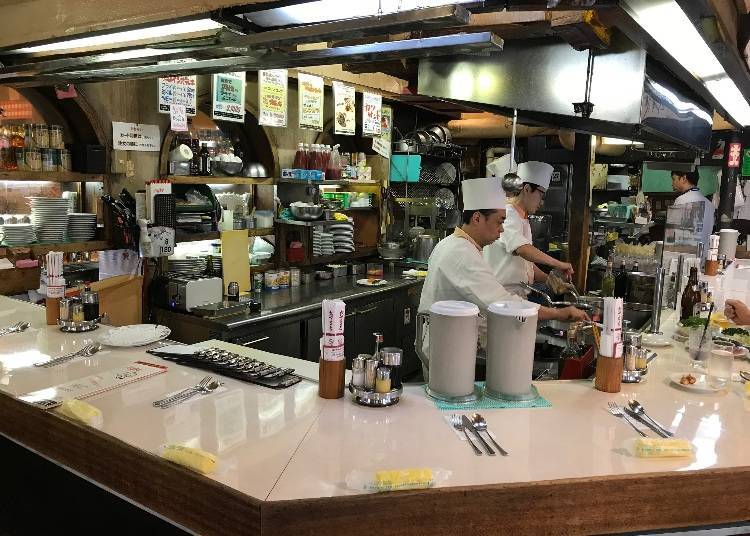 From the counter you can watch chefs preparing dishes

It takes only five minutes for the pork loin to be dusted in flour, fried, and covered with a soy-based sauce for it to appear as pork sauté.

Be sure to order rice to go with it! Mix some rice in with the sauce and see if that taste does not make you want to have some Japanese sake to go with it. 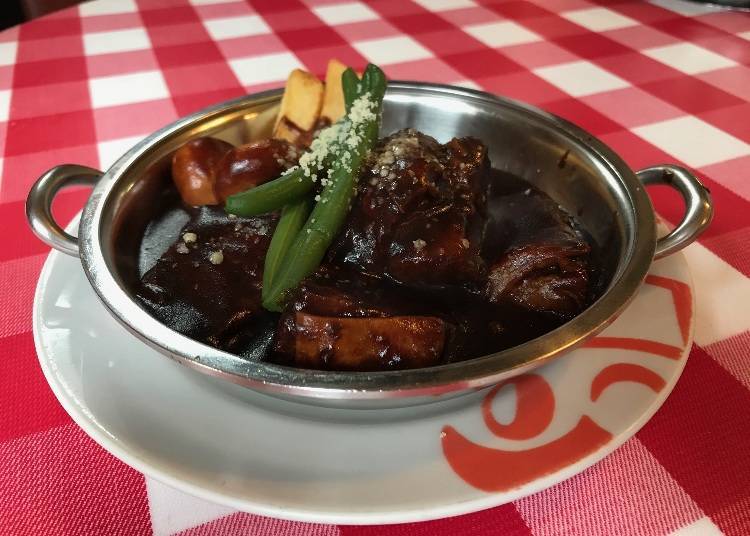 Mushrooms, potatoes, carrots, and green beans together with beef

Next time order the beef stew (2,500 yen). It has a wonderful demi-glace sauce made with a subtle blend of soy sauce. This is another dish originally Western that has involved into something uniquely Japanese. You don’t need the knife that is set with the fork and spoon because the ingredients are soft enough to cut with the fork.
Mix the chunks of meat in the demi-glace sauce and while lightly blowing on them, savor their flavor. If you ordered rice with it, you can also it each bite mixed with rice, a popular way to eat it among Japanese.
I recommend having rice instead of bread with the dishes you order at Yoshokuya Yoshikami. There usually is a line waiting to get a seat during lunch time and dinner time, so if you would rather not have to wait, try timing your visit to between 3:00 and 5:00 PM as you are likely to get a seat then. 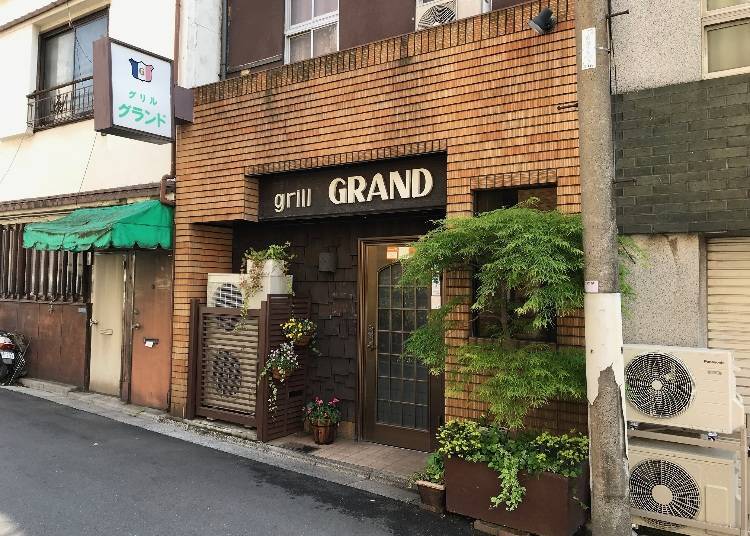 Opened in 1941 and located behind the Asakusa Kannon-do

The Grill Grand is located behind the Asakusa Kannon-do in a laid-back area lined with homes and places to dine. It has been in business for more than 75 years in the same location. Inside there are tables for 2, 4, and 6 people and chopsticks are provided at each table.
I ordered the shop’s specialty - its Tokusei Omurice (rice omelet special) - which costs 1,700 yen. Omurice is a combination of a Western omelet and Japanese rice, a dish that originated in Japan. The order came after about 8 minutes. The rice covered with a fluffy, lightly cooked egg and demi-glace sauce on top of that. 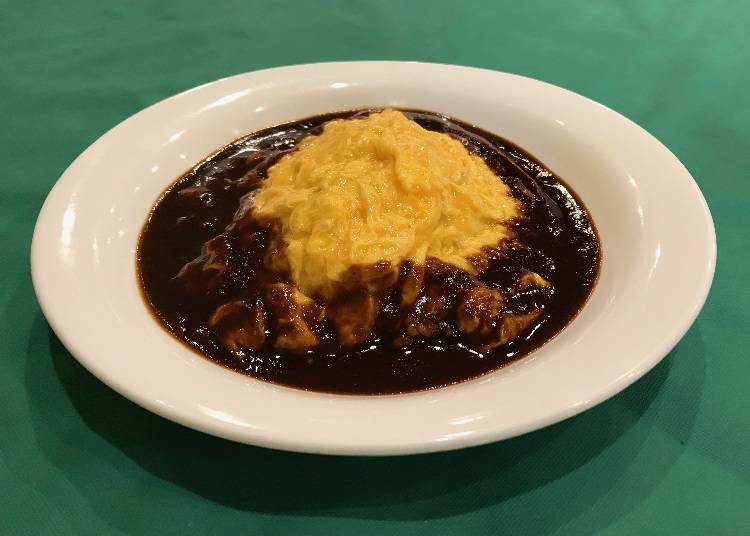 This Special Rice Omelet (1,700 yen) with its soft egg was being served here before omurice became a thing

The shop boasts a demi-glace sauce that has a lightly bitter taste that is popular with adults. When combined with the sweet flavor of the half-cooked egg, the chicken and rice stir-fried with ketchup, these three flavors blend as one and are a delight to the palate.

The texture of the egg and the umami of the chicken make this an amazing dish. Savoring the flavor of this special semi-glace sauce that has remained unchanged for over 70 years, this special rice omelet is a delight, and for this writer, so delicious he wolfed the whole thing in two minutes. 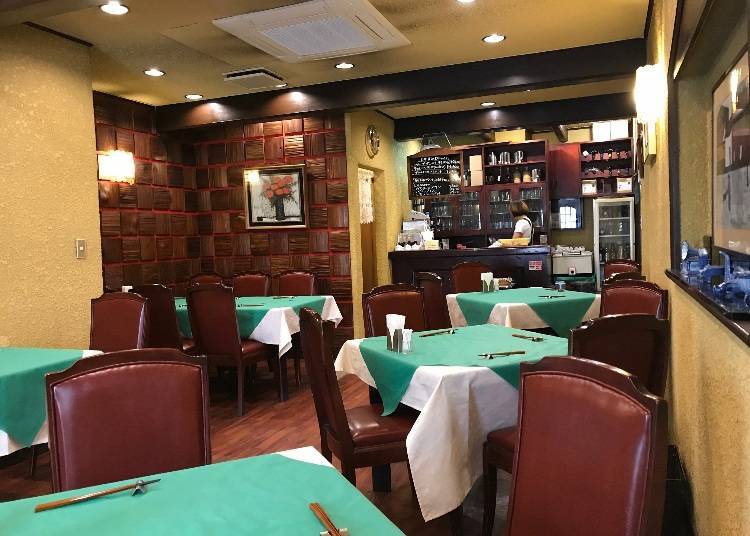 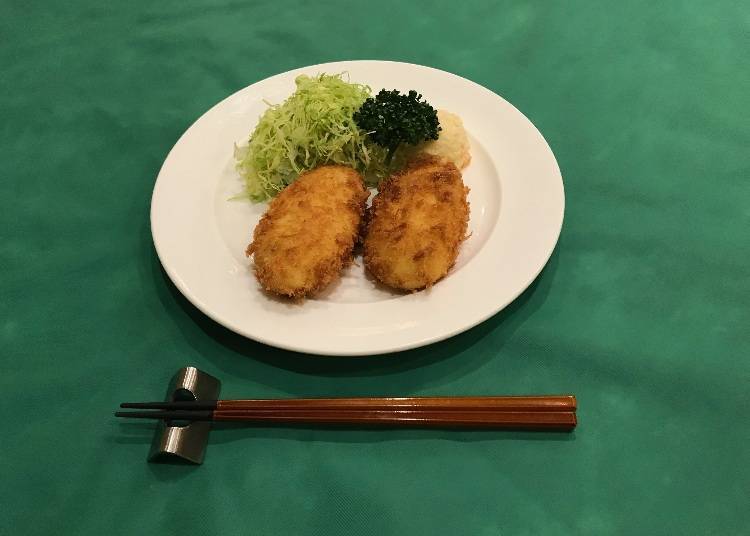 The crab cream croquette (1,800 yen) is easier to eat with chopsticks 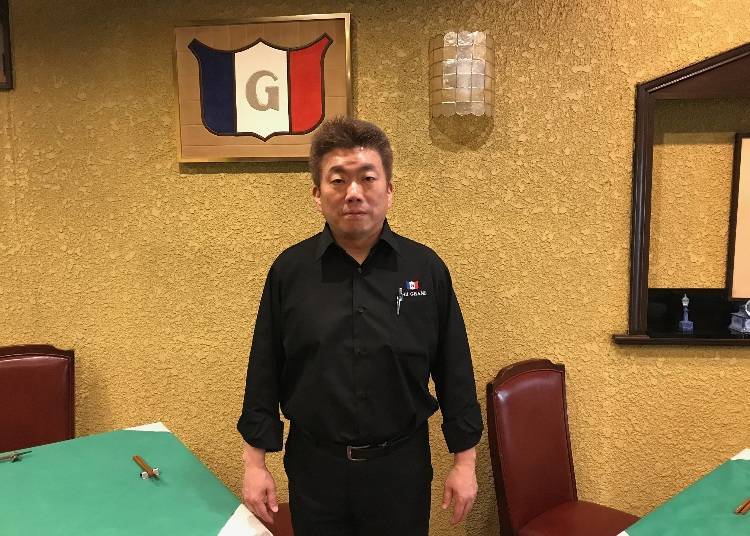 I used the chopsticks laid out on the table for the second dish I ordered: crab cream croquette (1,800 yen). This dish is modelled after the croquette of French cuisine, but instead of being cooked in an oven, it is deep-fat fried. One serving consists of two croquettes.

“You don’t need to add sauce as it is already seasoned,” advised the manager Mr. Masakazu Sakamoto and I did as he advised, cutting into a croquette with the chopsticks.

Once opened, the soft creamy center slowly unfolds and at the right consistency for easy eating. The outer part is crisp while the center is rich and creamy. Blowing on each bite to cool it, the flavor, texture, and aroma of the hot delicacy blend perfectly making this a dish you will certainly enjoy.

3. Lodge Akaishi (est. 1973): A fun fusion of Japanese and Italian - the ultimate in spaghetti! 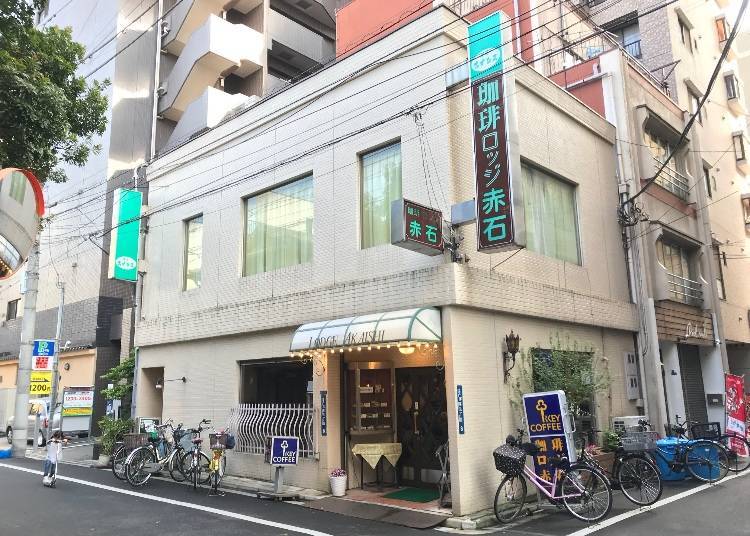 Yoshoku shops are not the only ones offering Yoshoku menus. Coffee shops, which primarily serve coffee and tea, also have menus offering light fare, and this is one that offers Yoshoku. This third shop I visited is just such a one. 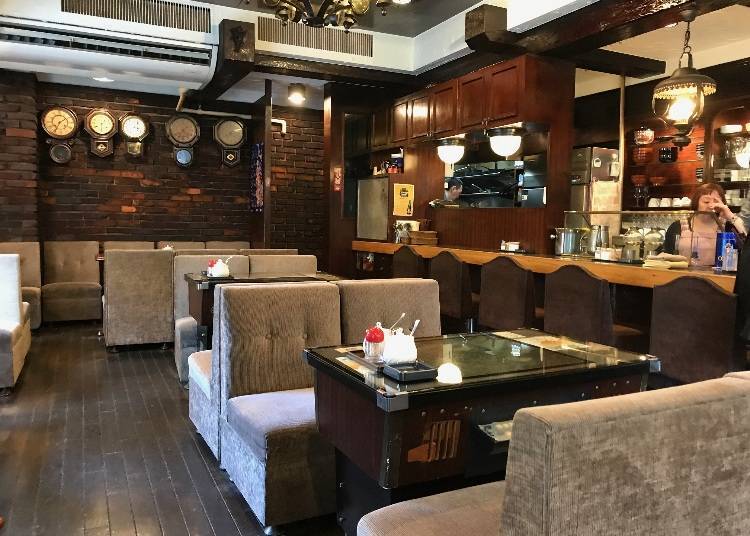 Located in Asakusa 3-chome, the coffee shop Lodge Akaishi sits on the corner of a residential area on the north side of Kototoi-dori.
The shop opened in 1973. As the shop’s name implies, it primarily serves drinks such as coffee and tea, but in addition to that, it also offers a selection of Yoshoku dishes such as omurice, doria (Japanese gratin), spaghetti, and hamburger.
I ordered the Spaghetti Napolitan (800 yen) which is very popular on the menu. This is a dish that originated in Japan and is spaghetti stir-fried in tomato ketchup and one that delivers a flavor different from Italian spaghetti dishes. After placing your order, you can hear the dish being prepared in the kitchen and when that stops, the dish of orange-colored pasta is delivered to your table. 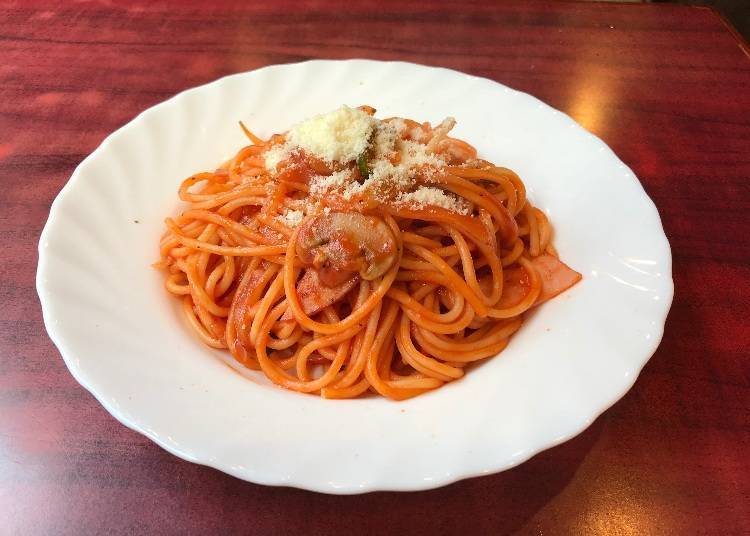 This dish is called “napolitan” even though it originated in Japan

Stir-frying it gives it a deeper flavor and imparts a taste of home cooking. This is a simple dish that is enjoyed for the relaxing comfort it imparts. This coffee shop is the perfect place to drop by when you want to take a rest from whatever you are doing. The napolitan served here perfectly matches the shop’s concept and atmosphere. 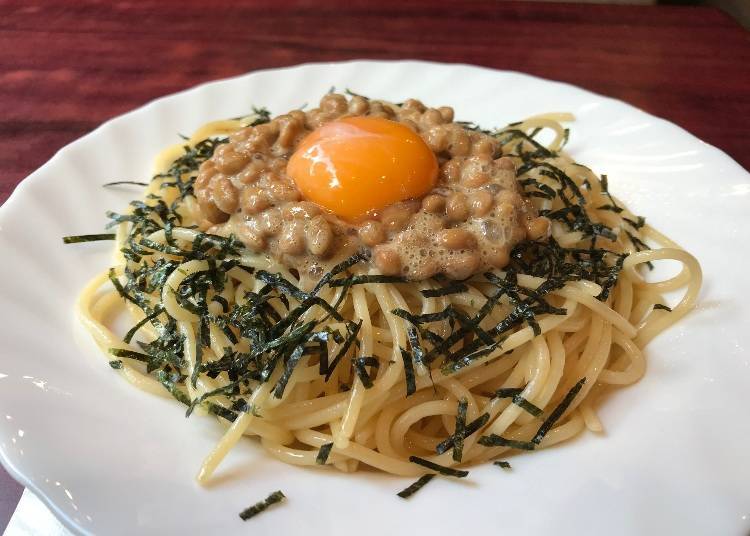 The ultimate Yoshoku fusion of Japanese and Western styles!

If you are interested in trying a uniquely different dish, I recommend the Natto Spaghetti (800 yen). Spaghetti that has been stir-fried is topped with shavings of seaweed, natto (fermented soybeans), and a raw egg on which you add soy sauce and mix it up before eating. This is definitely a fusion of Western pasta served in a Japanese style. If you don’t have trouble eating natto, then I really recommend that you try it.
This shop also stays open until 4:00 AM Tuesday through Saturday. All dishes, excluding desserts, can be ordered for takeout.

All prices include tax.