HOME Tokyo and Surroundings Tokyo Tokyo Station Explore Izumi, a charming Japanese city that attracts over 10,000 cranes during the winter 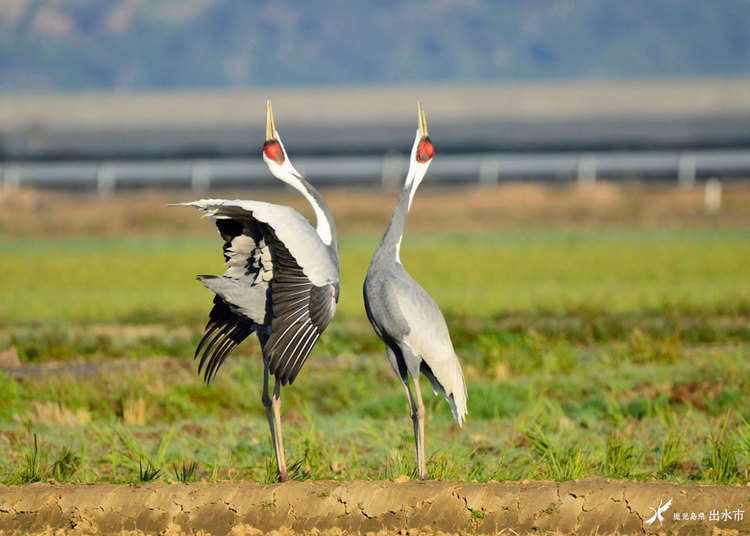 Explore Izumi, a charming Japanese city that attracts over 10,000 cranes during the winter

Kagoshima Prefecture sits at the bottom of Kyushu, Japan’s southernmost main island. Izumi City is in the north-west corner of the prefecture, facing the East China Sea. During the winter months (late-October to March), birdwatchers from around the world descend upon the city to observe the more than 10,000 cranes that migrate from Siberia to the warmer climate of southern Japan. 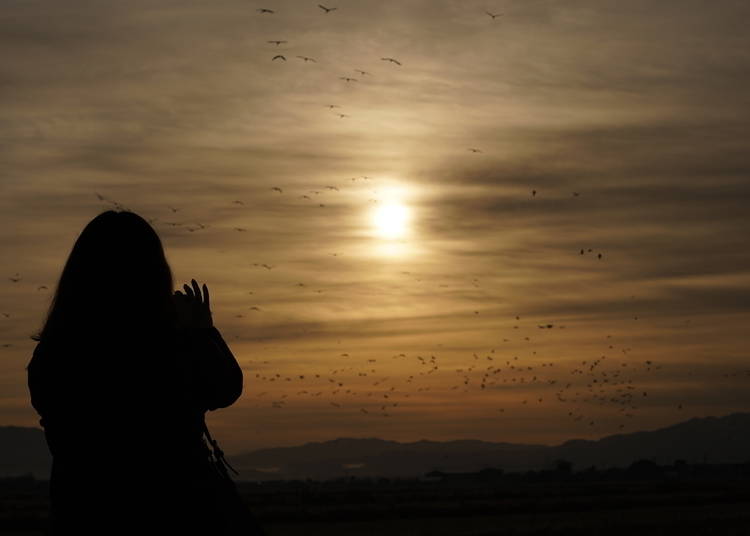 Wake up early to see the cranes take flight

The sight of over 10,000 cranes taking flight at dawn is unique to Izumi. The spectacle starts slowly with a trickle of birds, and as the sky grows brighter, numbers begin to increase. Before long, thousands of birds flood the sky. 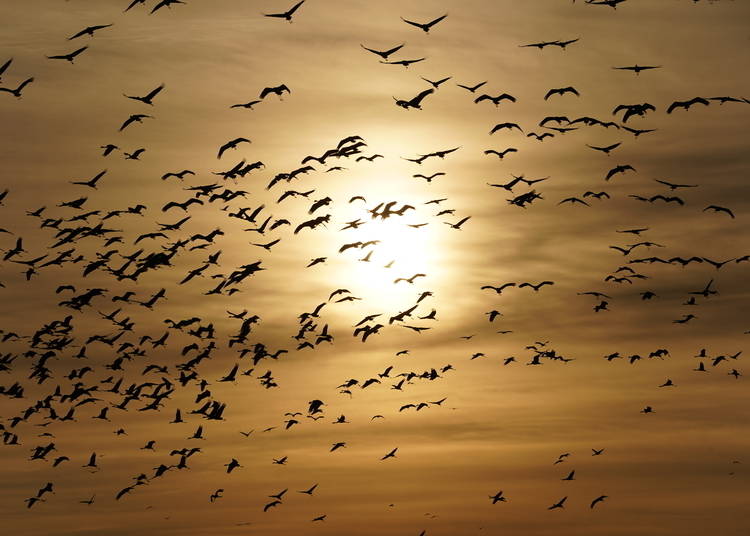 Thousands of cranes fly in the morning sun

The most spectacular time to see the cranes in flight is early in the morning. Once feeding starts, the cranes fly off in a group to eat. Izumi City is the only place where you can see thousands of cranes to a backdrop of the morning sunrise, so be sure to wake up early to not miss out on this spectacular phenomenon. Afterward, head to the Crane Observation Center to find out more about this fascinating phenomenon (and the chance to see the cranes up close). 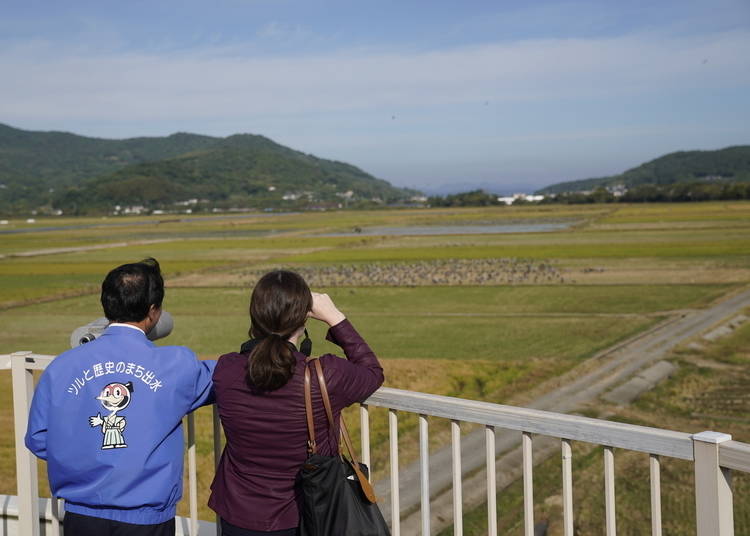 Izumi Crane Observation Center's viewing deck offers great views of the cranes, thanks to its proximity to the specially protected paddy field where the creatures roost. English volunteer guide Yutaka Ouchiyama is often on hand to give visitors some background about the birds' behavior. He is adept at providing clear information about the cranes, despite not being fluent in English. Yutaka has created a handwritten notebook filled with English explanations, diagrams, and drawings of cranes. 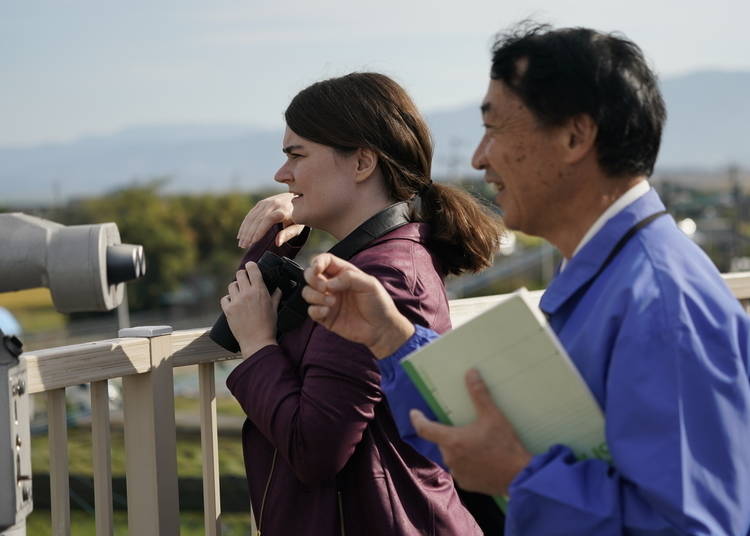 Yutaka and his notebook full of facts

Yutaka explains that Izumi is home to the largest crane-migration in Japan. The crane-watching season lasts from November to March, when the birds escape the harsh winters of Siberia to winter in Japan. Of the 15 crane species around the world, seven have been observed in Izumi—primarily hooded cranes and white-naped cranes. The precise number of cranes that choose to winter in Izumi depends on the weather conditions, but the figure has stood at around 10,000 or more for over 20 years. 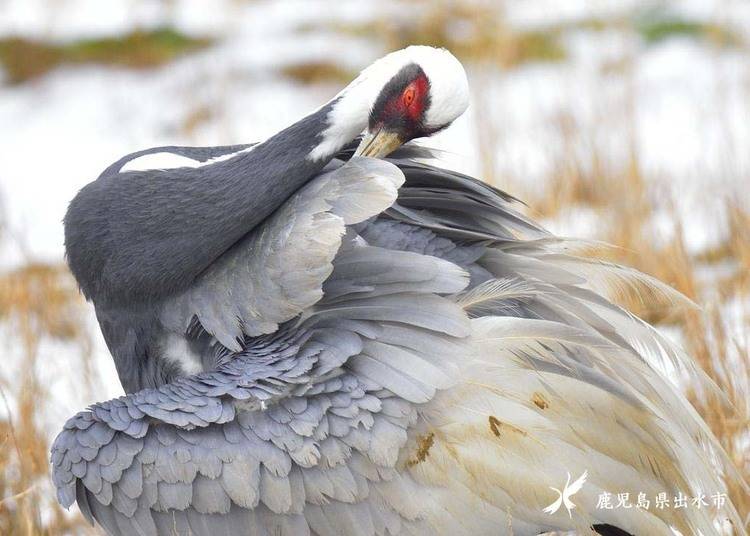 A white-naped crane cleans its feathers

Yutaka is an avid birdwatcher and recommends visiting Izumi outside the crane-migration season too, explaining that the city is home to 300 species of wild birds—about half the number of birds that can be observed across the whole of Japan. (Check the Izumi city website for the best seasons and locations to see each bird.)

The convergence of cranes on Izumi has a complicated history. In the past, far fewer cranes gathered each year, simply because they had alternative destinations throughout Japan and other countries south of Russia. However, as suitable overwintering habitats gradually began disappearing due to land development, the cranes increasingly began to favor Izumi. 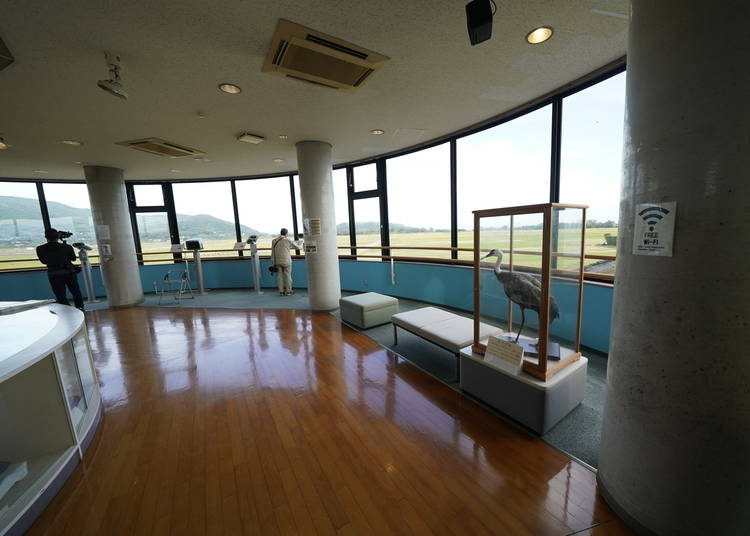 City residents have played a key part in the emergence of the mass migration grounds. As the cranes were eating up local crops, the residents decided to set aside a special area for the birds, providing them with meals to keep them from razing the surrounding fields. Gradually, the cranes became a source of pride for Izumi—as well as a sightseeing draw. In 1952, the government designated the cranes a Special Natural Monument. Such points further spurred the development of the protected area. 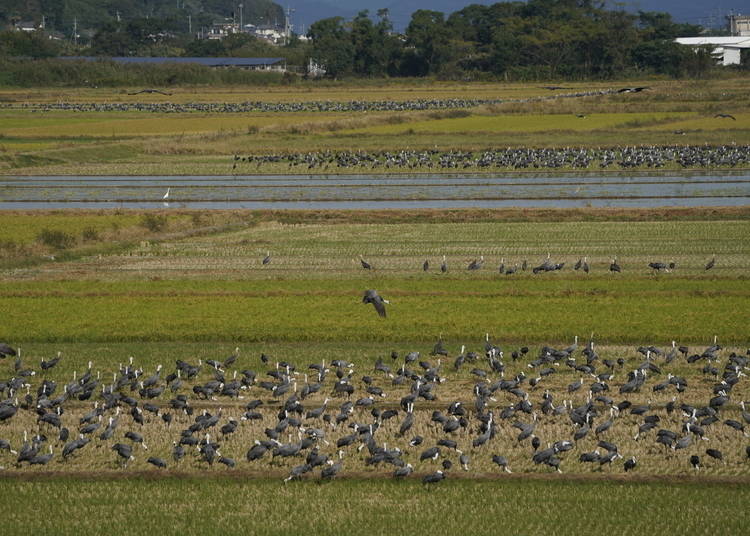 This photo was snapped on November 1, as the cranes started to arrive in Izumi

Today, the Izumi crane migration grounds comprise about 104 hectares of rice paddies and marshland, spread over two locations. City residents strive to make the habitat as comfortable for the birds. Cranes prefer to sleep standing up, so providing an area of shallow water is crucial; rippling water warns the sleeping cranes of approaching predators. One of the biggest draws is the grain-bearing truck that arrives each morning at 7 a.m., soliciting much fanfare from the cranes. There's also a facility to care for injured and sick cranes.

Exploring the family life of cranes 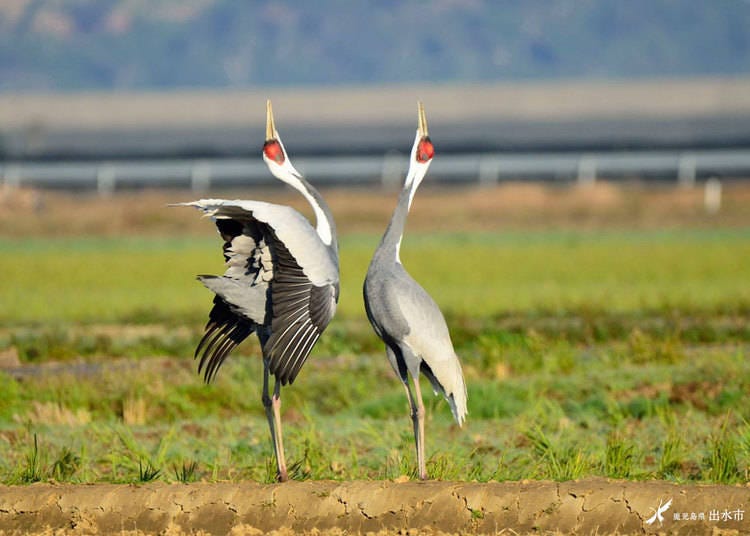 A white-naped crane couple in typical calling posture, with heads thrown back

Cranes pair monogamously for life. The birds perform elaborate courtship dances, leaping into the air, calling to each other, and bowing their heads. Both parents help raise the chicks. 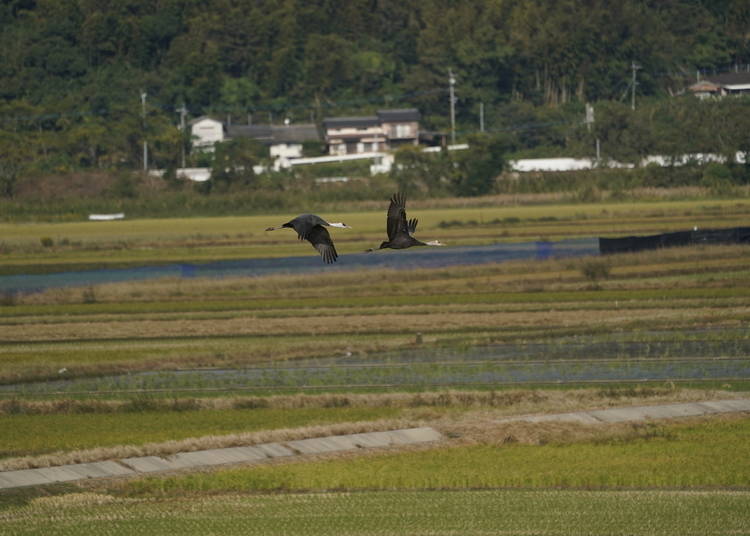 Two hooded cranes flying together indicates they are a couple

Crane family structure influences the flying behavior you can see in Izumi. Two cranes flying together are a couple, while groups of three or four are the parents and one or two youngsters. Solitary cranes are not yet sexually mature and will eventually find a mate. 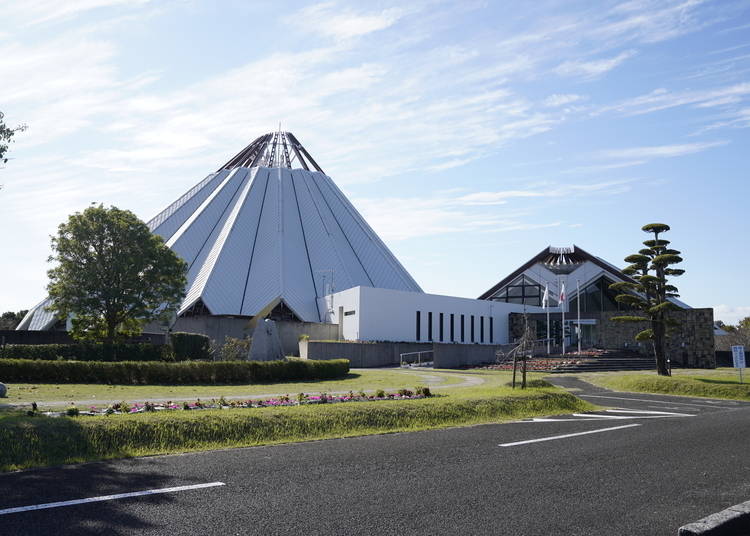 To learn even more about cranes, visit Crane Park Izumi, Japan's only museum dedicated to the birds. The facility houses a wealth of information, photographs and other crane-related materials. There is even a section dedicated to the crane's presence in cultures around the world. Cranes hold a special place in Japanese culture, representing long life, happiness, and happy marriage. They're also a popular subject for origami. 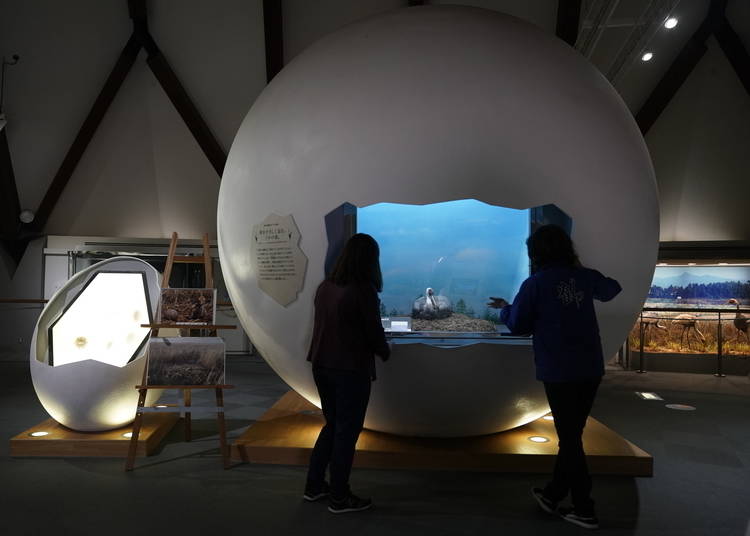 Although the museum's exhibits have yet to be translated into English, the day we visited we were lucky enough to receive a very rare English-language tour from the museum curator.

Tip: The Crane Sightseeing Excursion Bus is a convenient way to access the highlights of Izumi. The loop bus runs from Dec. 1 to Feb. 29 and connects Izumi Station with Crane Park Izumi and the Crane Observation Center, as well as other stops, including the samurai district.