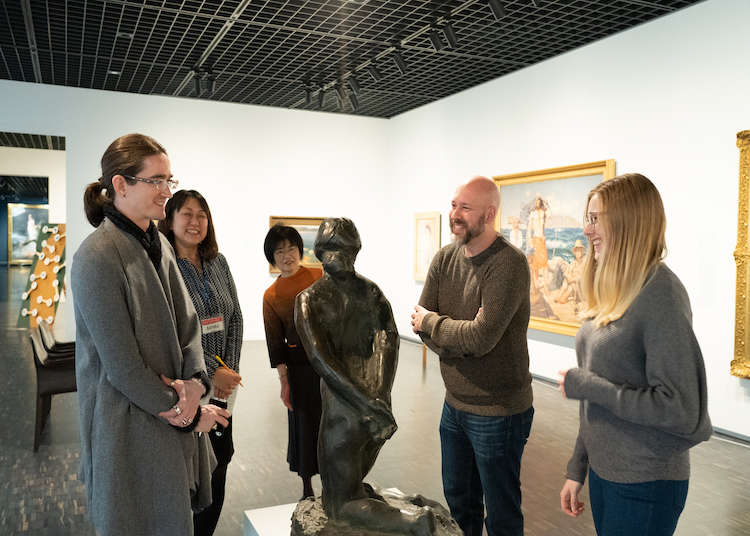 As someone whose love of the arts led them to actually live in Japan, I can’t get enough Japanese art, whether ancient and steeped in tradition or cutting-edge digital! That said, for many people—even Japanese—modern art can be a bit of a closed book. It sometimes seems as if Japanese art jumps from feudal-era ukiyo-e woodblock prints to pop-culture manga panels without anything in between.

The oeuvre of the National Museum of Modern Art, Tokyo (MOMAT) covers the period from the early 20th century to the present day. When I heard about a new English-language program that brings works from this period to a wider audience, I had to go see it for myself.

Join me as I join in with a gallery talk and see what this exciting new program has to offer.

On the Frontline of the Arts

The first English-language art appreciation discussion program of its kind in Japan, “Let’s Talk Art!” is an interactive art discussion and cultural exchange. Not limited to fans of the arts as such, it’s as much a chance for the team at the museum to hear varied international perspectives on Japanese artwork as it is for visitors to learn more about MOMAT’s fantastic collection and the chapter of Japanese culture it represents.

Far from a conventional gallery tour, this is an experience-led discussion where you are encouraged to react to the artworks, and let that spark a conversation with people from various cultural backgrounds. 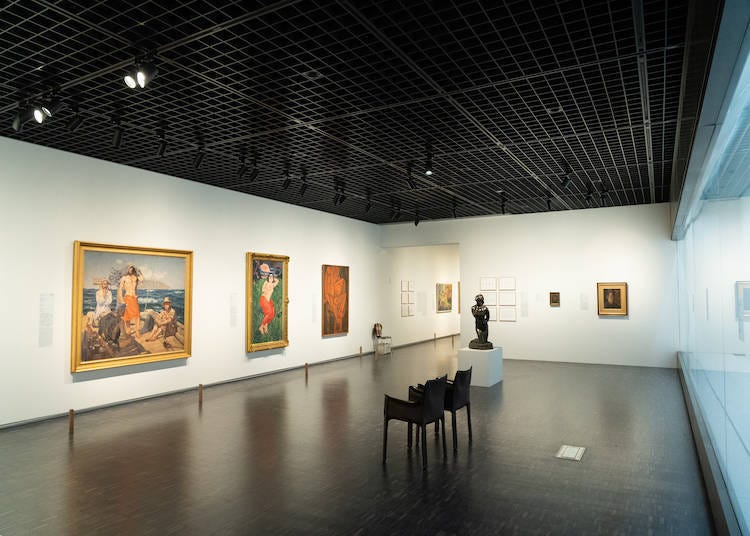 MOMAT holds a number of remarkable records. It was Japan’s first national art museum, and is currently in a very prestigious location - just a stone’s throw of the Imperial Palace. The museum also boasts one of the country’s largest collections, and numerous Important Cultural Properties can be found in its expansive 13,000-piece archives. In fact, MOMAT possesses so many cultural gems that its exhibitions are in constant rotation to illustrate the ebb and flow of 100 years of Japanese modern art through a number of different themes and perspectives. 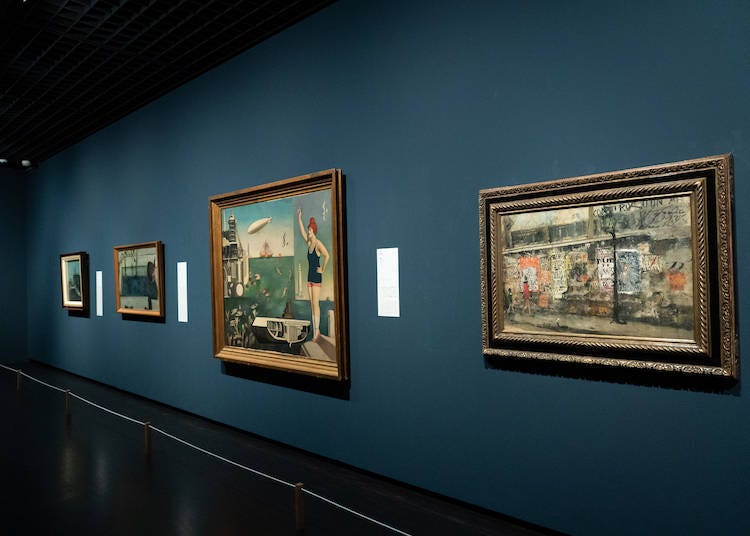 While the term modern art might conjure up images of love-it-or-hate-it surreal or abstract works, that is only a piece of the full picture. At MOMAT, you take part in Japan’s journey to modernity, from traditional Japanese nihonga paintings to Western-influenced work to pieces that show a mastery of both worlds. In short, if you are put off by Jackson Pollock, don’t worry—there is Japanese modern art for all tastes!

This is an era of Japanese art with which international visitors to Japan may not be familiar, and what better way to discover this exciting era than via your own cultural perspective through the interactive “Let’s Talk Art!” discussion program! Every Friday, participants tour three pieces in an hour-long workshop. An English-speaking facilitator guides the tour, but their real role is to let you speak your mind and get a lively discussion going.

The works selected are built around a specific theme. For our visit that was “stillness and motion.” Over the course of our tour, the conversation bounced around a number of topics—from serious to frivolous—as we got lost in the world of art. Far from a university lecture, the program is built around personal reactions to the pieces, so don’t worry about showing off—just express yourself! 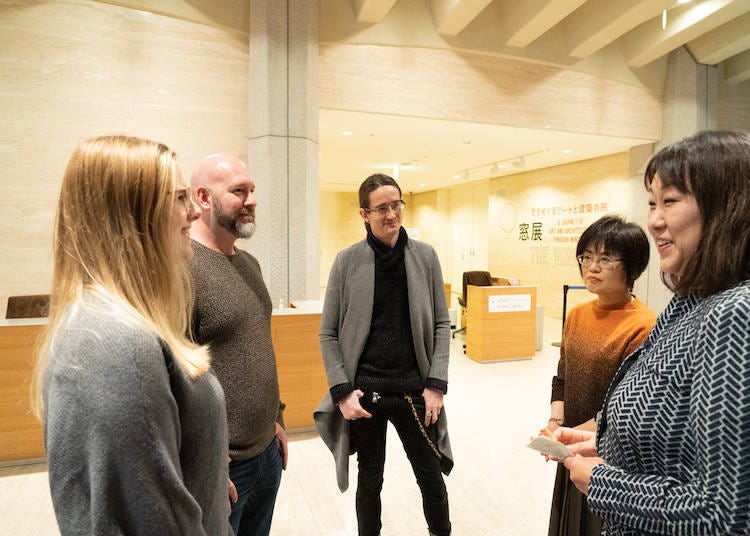 Our group was led by the facilitator, Sayaka, who originally hails from Nagoya. Her favorite artist is Kano Hogai, a pioneer of Japanese nihonga painting who is included in the MOMAT collection.

I was also joined by Tim and Cassie from Live Japan’s editorial team, as well as Tokyo native Kumiko. Tim originally hails from New York and is a fan of neoclassical works by artists such as Jacques-Louis David—a little earlier than the remit of MOMAT. Cassie is from London and is an artist in her own right, working on magical realist portraits in digital mediums as a hobby. And Kumiko? She loves Western art, in particular the expressive brushwork of van Gogh.

Your author, Samuel, is a fan of classical Buddhist sculpture, especially the school of Unkei and Kaikei.

As you can see, we were a varied group, with a diverse interest in the arts! Apart from our facilitator, Sayaka, no one was an expert in modern art, but that didn’t stop us as we dived in and started talking!

Join us and see what we thought! Throughout the program, we were encouraged to avoid reading the accompanying description and just give our honest reaction to the work. Of course, our full discussion was much longer, but you can get a taste of our reactions to each work below. 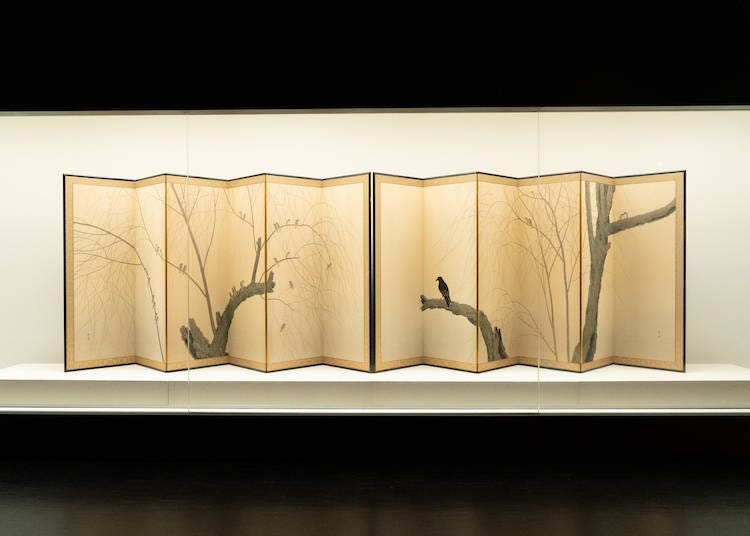 Facilitator: Remember there is no right and wrong—only your opinion—so let’s talk art!

Tim: I was struck by how much detail there is in the piece. It looks so simple from a distance, but up close you can count the feathers on the sparrows and see the moss on the tree trunks. Against all that detail, the just-off-center crow is like a block of black that draws the eye.

Kumiko: For me, while it looks so still, I feel that the presence of the crow threatens the sparrows. I almost want to rush in and protect them! 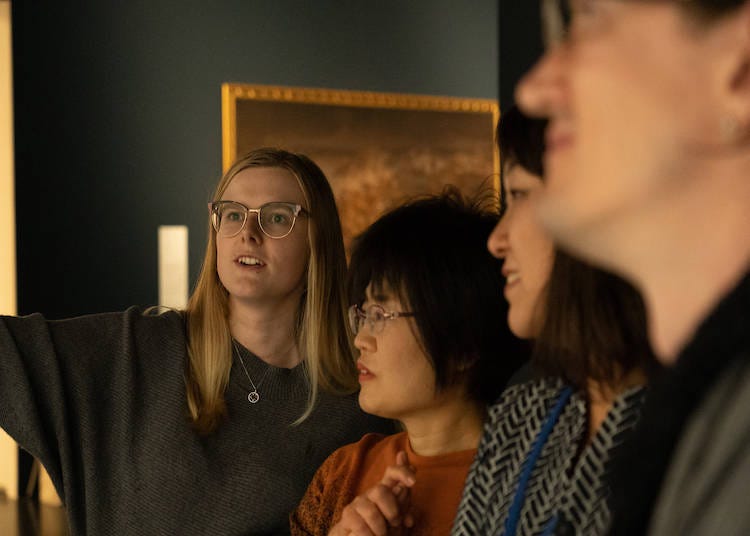 Cassie: I got the opposite impression! I felt that the sparrows were protected by the tree, especially because the screens are split into two. I found it quite peaceful.

Samuel: I find the large amount of negative space, particularly in the center of the artwork, to be something that most Western painters would have shied away from. We tend to put the subject right in the center! Even though this is modern art, it looks very traditional. I would have thought this was from much earlier than 1910. 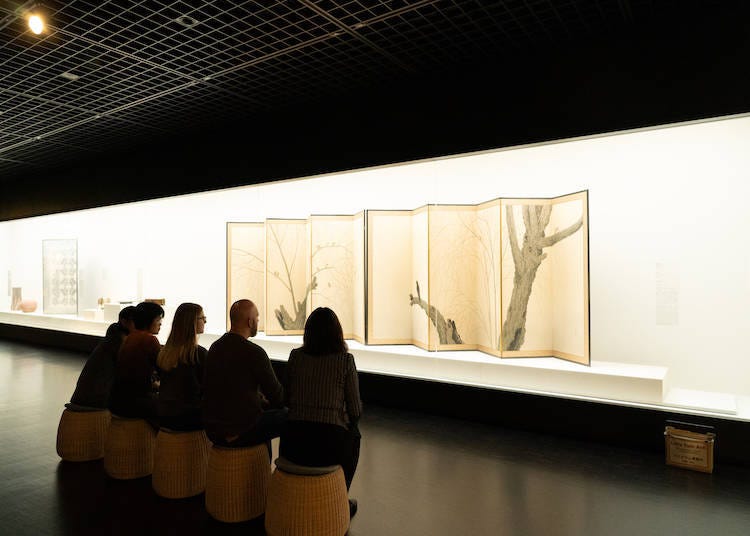 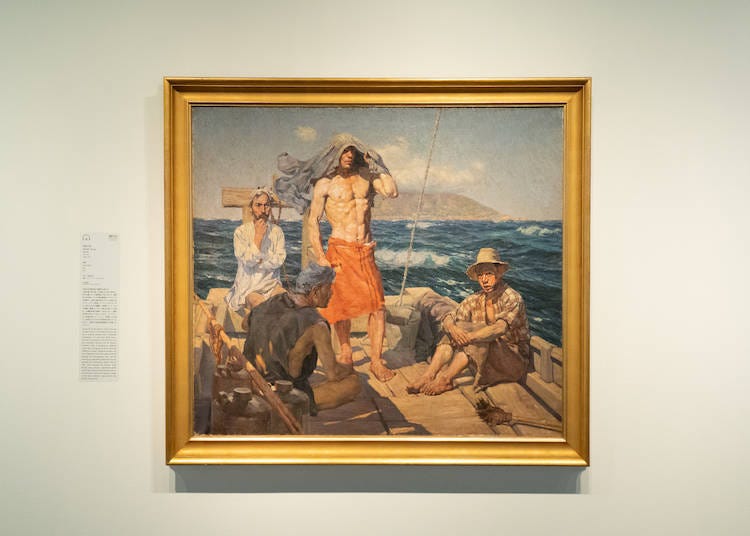 Tim: With this one, the Western influence is really strong compared with the first, even though this piece was painted at roughly the same time! I get the sense that the artist studied classical Western art and impressionism. The background of the painting looks like Japan, though. This must depict Western people sailing off the coast of Japan.

Facilitator: I know I said there were no right or wrong answers, but this is precisely correct!

Samuel: For a start, it is painted with oils, which is rare for Japan in this era. The subjects are also mostly Western and depicted as highly exaggerated, almost cartoonish, so it really must be a product of its time. Maybe it is just me, but I see the muscular central figure as being almost like a Nio, or Buddhist temple guardian, so there is a hint of Japan in that. 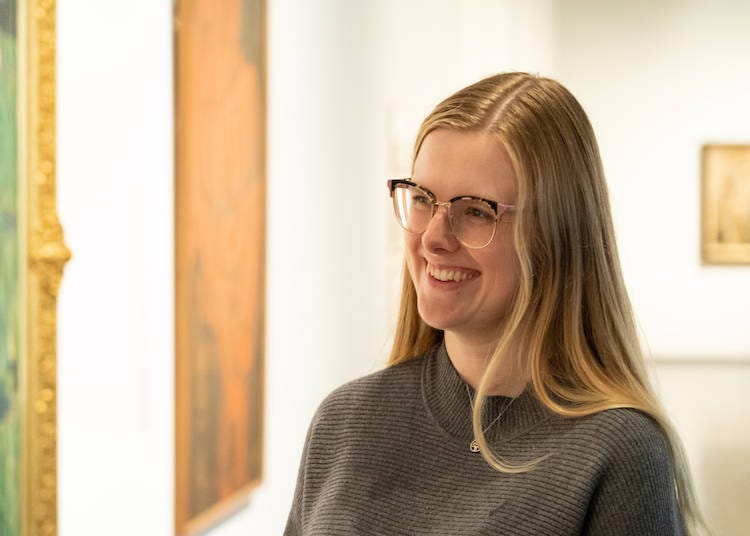 Cassie: Perhaps I’m most impressed by his rock-hard abs! Joking aside, I am impressed that there were so many styles of painting in the same period, and that Japanese and Western styles existed side by side. The play of light in the piece is really beautiful as well. Just looking at all the shadows is truly impressive from a technical perspective.

Kumiko: Thinking of the time period, I think the central man symbolizes the strength of Western culture during this era and how Japan looked up to it. People wanted to aspire to that, and I think the artist wanted to do the same by working in a Western medium like oils. 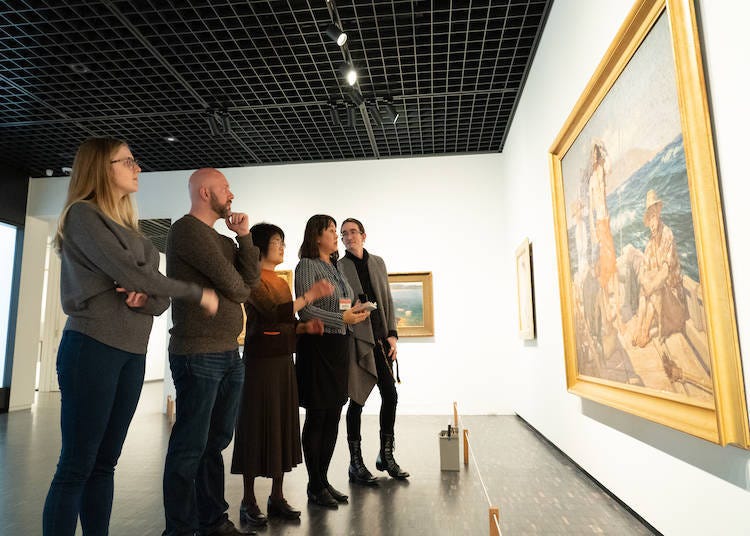 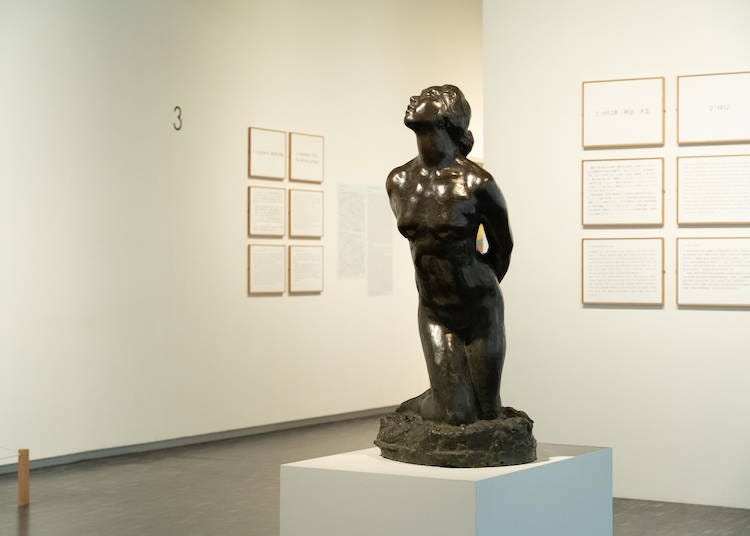 Facilitator: How does this piece make you feel?

Samuel: In a word, uneasy. The subject looks pained, and the position she is in looks constricted and uncomfortable. The bronze casting is also rough and unfinished, so it looks wrought rather than beautiful. The base looks jagged, too. I want to step in and save her! 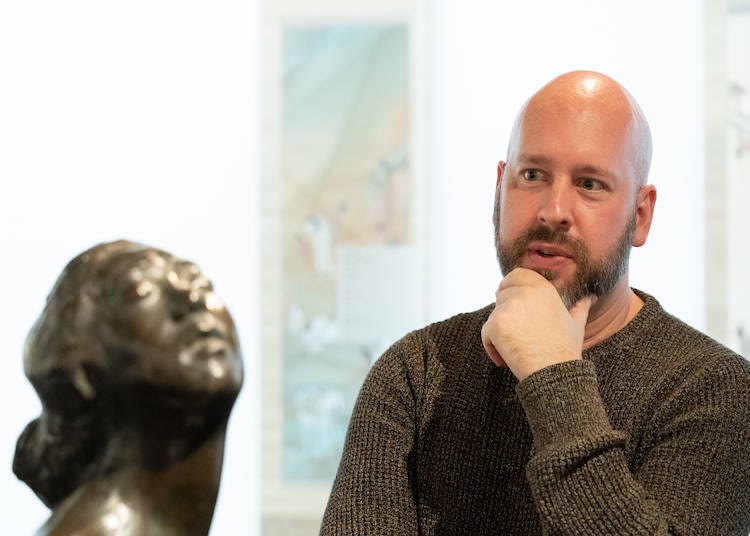 Tim: It looks very unnatural and I can’t tell what she is feeling by looking at her face. She could be serene or in pain. In that sense, it is a very compelling work. I thought she was manacled at first.

Cassie: Me too. If you look at the back of the work, she isn’t. But, instead, you notice that the sculpture is unfinished and rough at the back. She almost looks trapped or chained down.

Kumiko: For me, I felt like she is in the middle of transformation or is taking shape out of something formless. If you think about her as being in motion, then maybe she is becoming free. 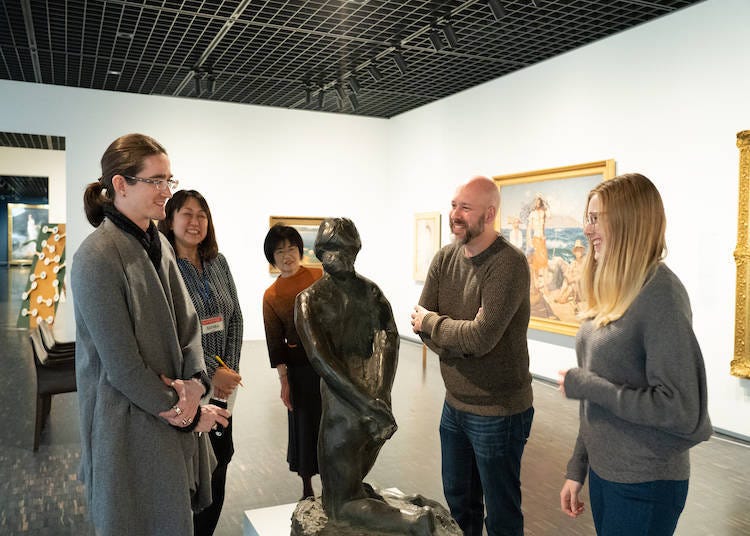 As you can see, we had a lot to say, and in addition to our own personal reactions it was great to hear how other people interpreted the artworks so differently depending on their own cultural perspectives. Needless to say, our guide provided a full explanation of the story behind each artwork for those that wanted to hear more.

If you are interested in Japanese culture and the arts the “Let’s Talk Art” program comes highly recommended! 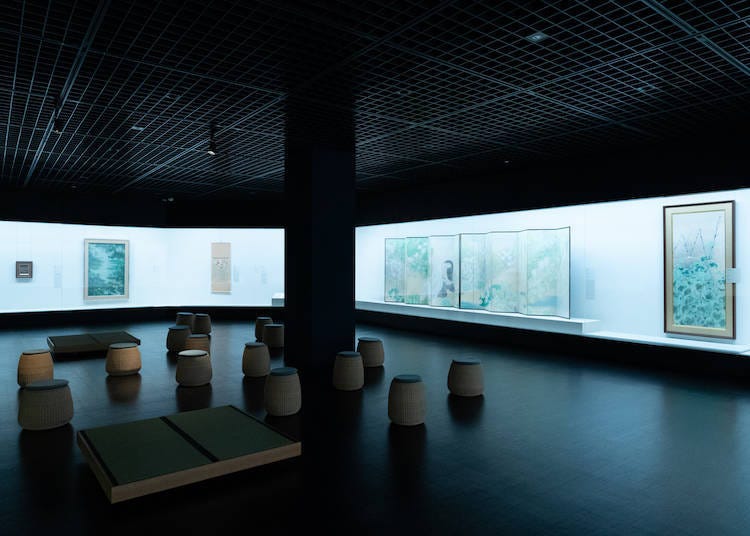 Of course, it would be a shame to end your MOMAT story after just three artworks, so be sure to look around the rest of the MOMAT Collection after the tour is over. Once you are in the mindset to develop your own feelings towards each work of art—instead of just reading the description and moving on—you will have found a new way to enjoy the museum and art as a whole.

Meet new people or invite your friends and experience this rare opportunity to discover Japanese modern art in English.

If you have got a taste for discovering Japan through its art history, then you will be interested to know that the National Crafts Museum, Kanazawa, will be opening this summer. Located a short two and a half hour bullet train ride away north from Tokyo, this museum is dedicated to Japan’s artisanal crafts (kogei). The previous location of the gallery was close to MOMAT in Tokyo, but its new home in a region known for its crafts opens the next chapter for the gallery—and kogei as a whole.

Stay tuned for more on Japan’s national galleries here on Live Japan. For more information on the “Let’s Talk Art!” program, visit the link below.

Museum hours and exhibition periods are subject to change.
Please check the latest information directly with the museum's official website.

Discover the Many Attractions of the National Art Center, Tokyo - Art, Architecture, Gastronomy and Beyond!
Explore Art, Explore Japan! 7 Must-See National Galleries in Tokyo, Osaka, Kyoto, and Kanazawa
*This information is from the time of this article's publication.
*Prices and options mentioned are subject to change.
*Unless stated otherwise, all prices include tax.