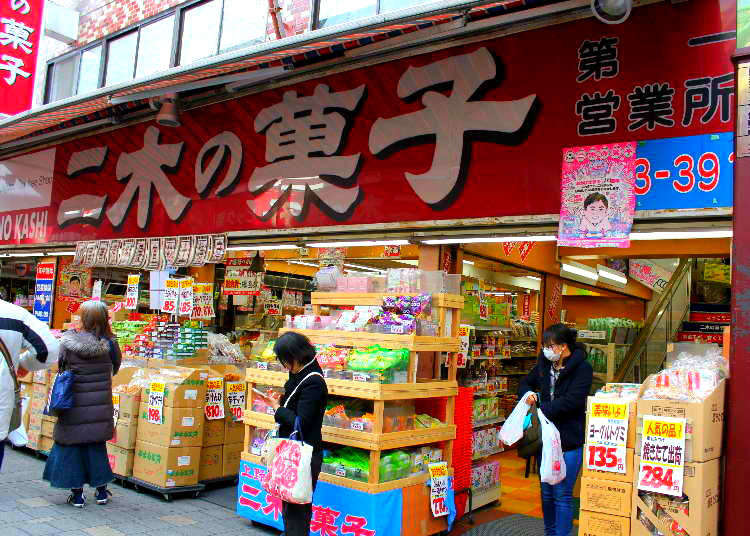 Ameya Yokocho, or simply Ameyoko, is Ueno’s fun and lively shopping street that is on the must-see list of pretty much everyone coming to Japan. Among the many shops offering food, accessories, and clothes is the famous Niki no Kashi, known for its massive abundance of Japanese snacks and sweets for ridiculously low prices.

From nostalgic candy to high-end confectionery, look forward to over 5,000 varieties of different sweets! Bulk purchases are made easy here, so if you’re planning to stock up on some delightful snacks for yourself and friends or family at home, you’ve come to the right place. However, with a selection as huge as Niki no Kashi’s, it’s easy to lose one’s head among the many colorful things.

To help you find the absolute must-try sweets, we talked to Yasunori Nakagawa, the store manager of Niki no Kashi at Ameyoko. 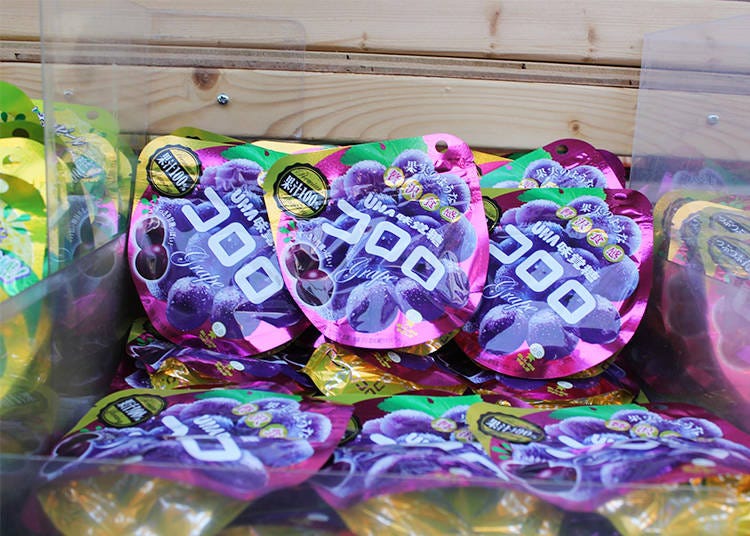 The grape flavor is by far the most sought-after. Keep an eye out for seasonally limited flavors as well, however! (85 yen)

Everyone loves a good gummy and Japan’s most popular variety is Kororo. “Overseas brands are massively popular as well, but Japanese gummy candy is loved because of its softness. Kororo is especially soft and it is made with 100% fruit juice, giving it a refined flavor.”

Kororo comes in grape, Muscat grape, strawberry, and lemon (as of March 2018), but there’s also a high-grade version called Zeitaku Kororo in which the soft gummy is coated with milk chocolate. The green grape flavor of this luxurious candy is especially recommended: “Yes, green grape is still the most popular one. The flavor, texture, and shape just seem to match perfectly.” 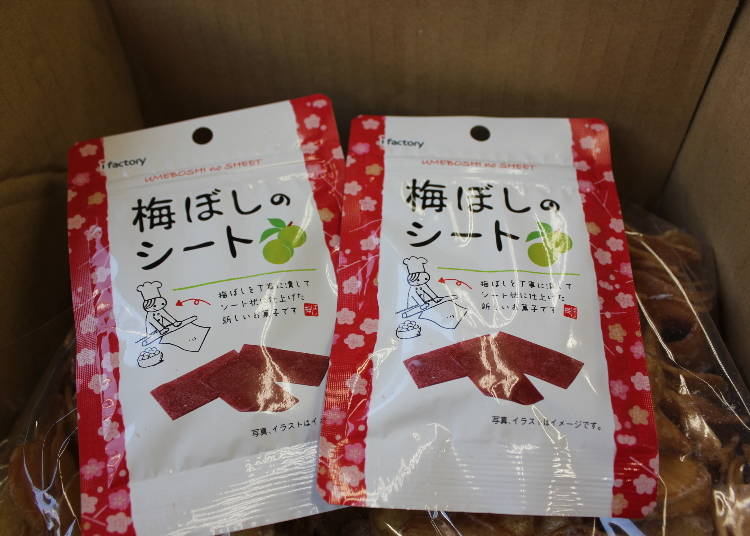 Umeboshi no Sheet sets itself apart from similar products with its cute packaging. (120 yen)

“There are various umeboshi products, but this one is especially popular due to its sourness.” Umeboshi are pickled Japanese apricots, often translated as “salted plums.” Usually, you’ll find it served alongside meals or as a cooking ingredient, but dried pickles are often used for snacks and sweets.

The Umeboshi no Sheet is a thin sheet of dried umeboshi. Unlike Japanese gummy, it is rather hard and needs to be chewed properly, but that is precisely what makes the sour-salty taste spread throughout your entire mouth. It prickles pleasantly on your tongue as soon as you start eating it and the flavor is positively addictive. The sheet shape also makes it easy to eat, a point that a lot of people love especially about it.

“Generally, umeboshi sweets tend to be on the sweeter side and they enjoy constant popularity, but it seems that people especially love this sour and salty alternative.” 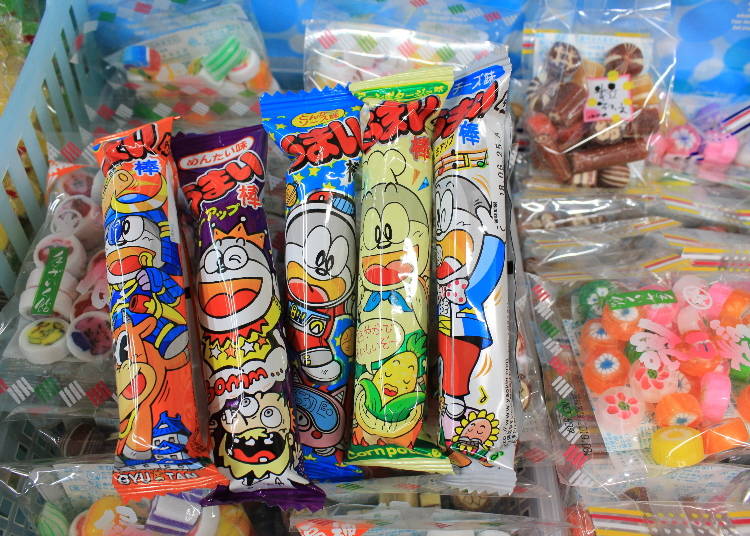 The unique packaging and characters are one reason for Umaibo’s popularity – maybe because it resembles the famous Doraemon so much. (10 yen per stick)

Umaibo is one of Japan’s most-beloved treats and it celebrates its 39th birthday this year. The light, savory snack is made from corn and comes in more than 20 different flavors! “This is also available in convenience stores outside of Japan, so people do know about Umaibo. Asian people love it as a tasty snack. At only 10 yen per stick and with the variety of flavors, it makes for an excellent souvenir.”

“The most popular flavor is corn soup, followed by the Japanese-style mentai (pollock roe). Cheese also is a top-seller.” A lot of flavors are only available for a certain period of time before being replaced by new ones, so if there’s one you particularly like, don’t hesitate to buy it in a bulk! 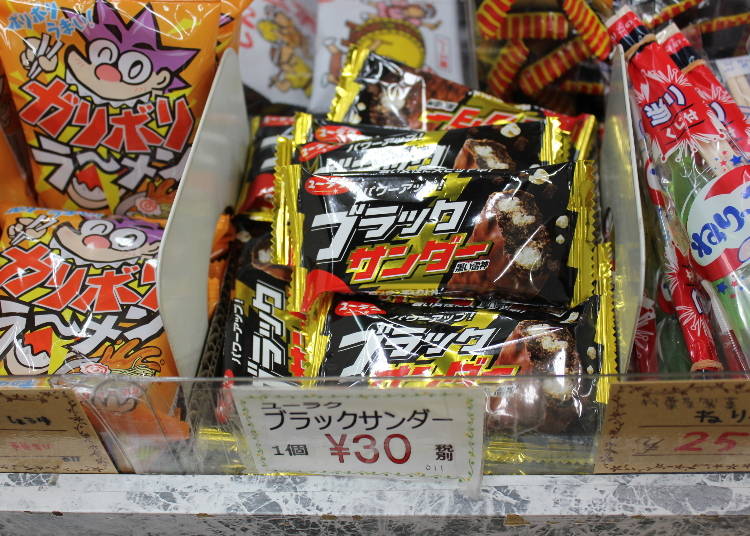 You’ll be surprised by just how amazing Black Thunder tastes, even though its price is basically a third of other candy bars. (30 yen)

Black Thunder is a well-beloved snack at convenience stores all around Asia. Coated with mellow chocolate, the inside hides a cocoa-flavored crunch! For only 30 yen, you’ll get a rich, sweet snack that is sure to satisfy your chocolate craving. Black Thunder was released in 1994 but really took off in 2008, when gold medalist Kohei Uchimura introduced it at the Olympic Games in Beijing. “At one point, it was exported to Taiwan in such quantities, there was a shortage in Japan.” 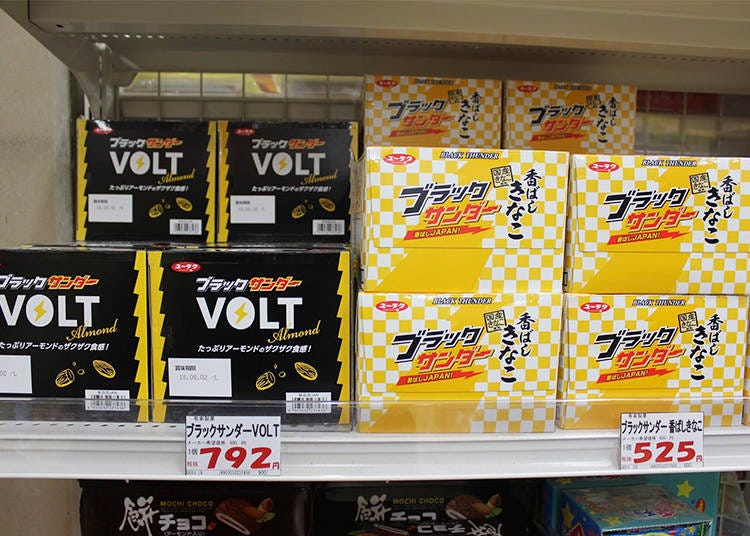 Black Thunder also has a variation called VOLT (729 yen), which is less sweet and features almond chunks. Another such variety is Black Thunder Aromatic Kinako (525 yen), infused with roasted soybean flour and rice puffs. The prices are for boxes of 20 pieces.

#5 KitKat – More Flavors Than You Can Imagine! 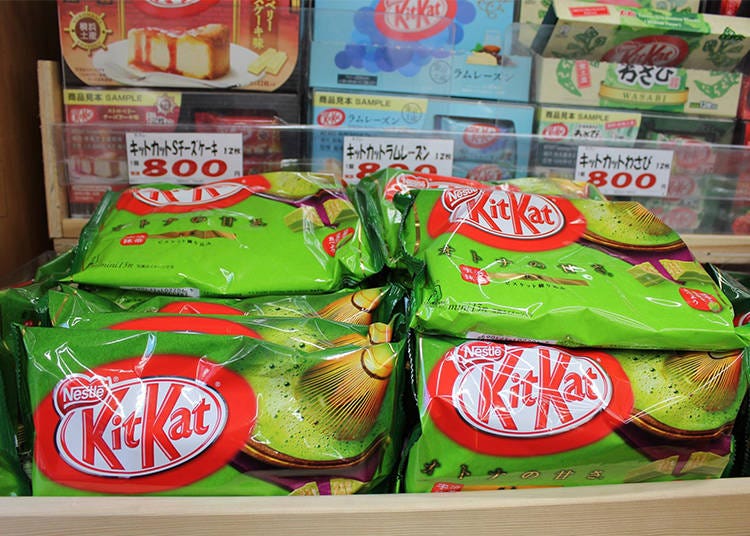 Among the various matcha flavors, KitKat Mini Otona no Amasa Matcha is the most popular. (234 yen)

Japan goes completely wild with KitKat - that is something that the entire planet seems to have realized by now. While most people imagine the classic chocolate-wafer-combination, Japanese KitKat offers innumerable flavor varieties. “Taking all flavors into account, KitKat sells like crazy, even better than Black Thunder.”

“Matcha is particularly popular, yes.” But even when it comes to matcha, there are 10 different unique KitKat varieties. Every tourist closely associates Japan with matcha, so the KitKat matcha varieties are a true flavor adventure. “Among them, the most popular one is ‘Otona no Amasa’ with a moderate sweetness. It works well as a souvenir because it is milder than the rich-tasting ones.”
By the way, KitKat is particularly dear to Japan because it sounds just like the Japanese term kitto katsu, which means “sure to win.” That’s why KitKat now even holds a bit of a lucky charm status. 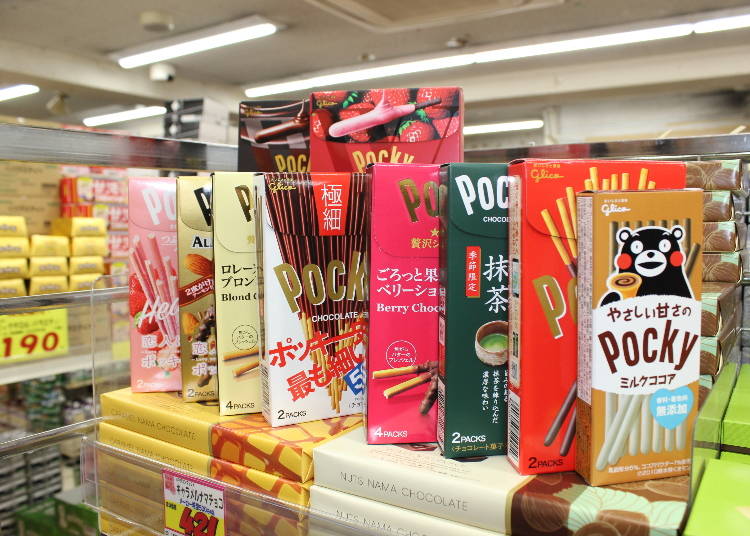 From kids to adults, everyone loves Pocky – not only in Japan. (One box from 70 yen)

Glico’s Pocky, now that’s a Japanese candy that everyone surely recognizes. Just like KitKat, it boasts a massive variety of fun and creative flavors and has gained so much fame, you’ll even be able to find it outside of Japan fairly regularly now. From especially thin to especially thick, sweet to bitter, every single Pocky variety is equally popular. “Almost the entire world knows Pocky now, so if you don’t know what to buy, this is a great and safe choice.”

Here’s a fun fact: the company behind Pocky is called Glico. In 1922, it produced caramel with glycogen extracted from oyster broth, selling it as a revolutionary “nutritional candy” at that time. The catchphrase of this caramel was “one bite, 300 meters,” because the thought behind it was that eating it would make you run fast. This is how the now so famous symbol of the company was born – a runner crossing the finish line with both hands raised in triumph. This “Glico Man” is now a major landmark of Osaka’s Dotonbori area, where the caramel was sold for the first time. 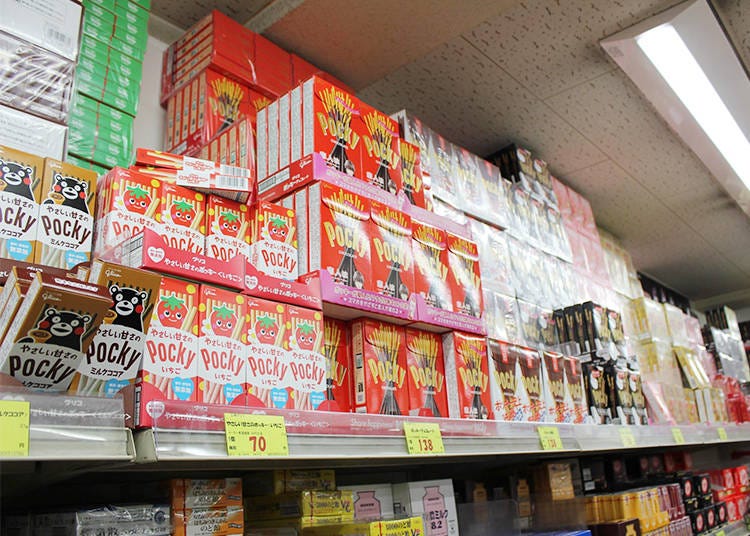 The second floor of Niki no Kashi: Pocky, as far as the eye can see...
Pocky & Pretz: Hunting the Perfect Souvenir at Glicoya 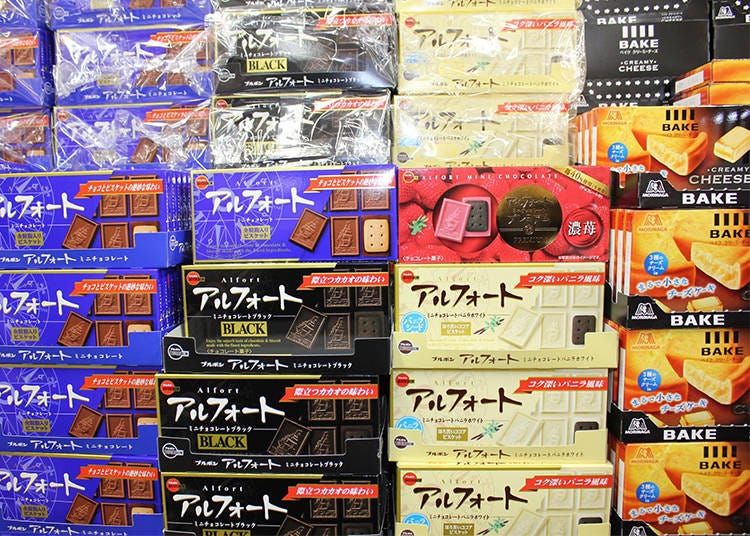 The blue package is the regular biscuit. Alfort also comes with bitter chocolar, white with vanilla, and strawberry. The latter varieties have a rich cocoa biscuit. (85 yen)

Alfort is a brand of biscuit with chocolate and is loved for its wonderful texture and rich taste. It doesn’t have many flavor variations, but its many fans think that simple is best anyways. “We have a lot of customers that show us a picture and say ‘I want this.’ The plain type is the most popular, so having few flavor variations might actually be Alfort’s strength.” 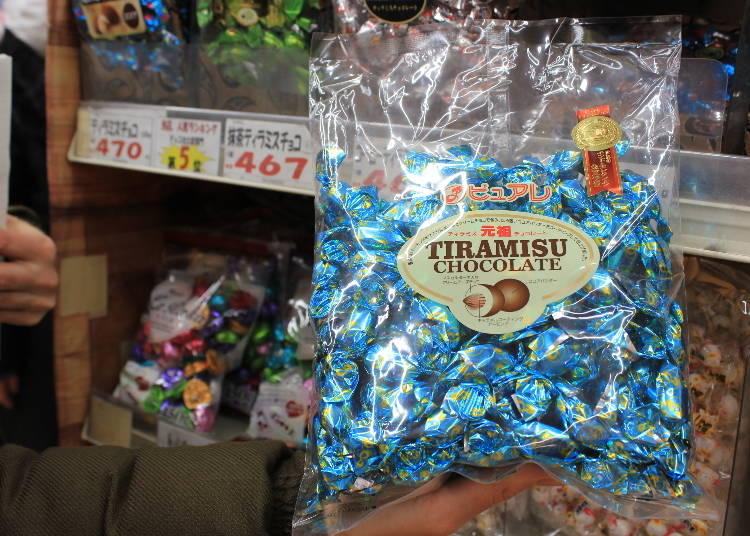 This is called the grandpa of all tiramisu chocolates. The large bag is popular. (1,500 yen)

“Originally, this candy was made by two manufacturers in Japan, one of them being this one. There are plenty of similar products in other countries, but this one can be called the grandfather if you will.” Just like Alfort, a lot of people come to Niki no Kashi and show a picture of the Tiramisu Chocolate. The matcha variety also enjoys large popularity. 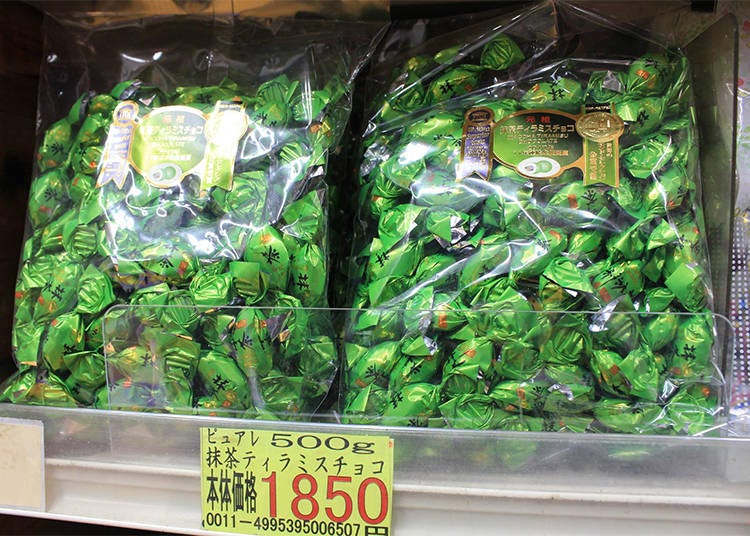 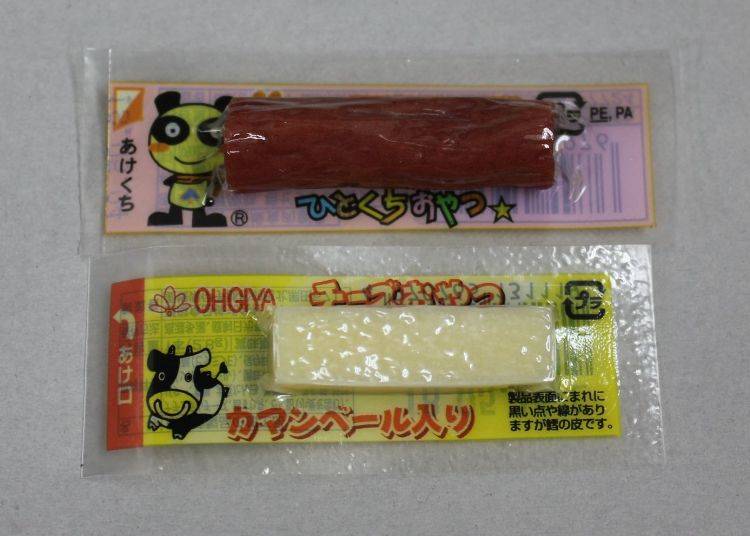 From sweet to savory, Oyatsu Calpas is a bite-sized salami made with pork and chicken. It’s particularly among adults, as it goes wonderfully well with a cold glass of beer or sake. The individual packaging is supposed to keep you from eating too many at one time, but honestly, the little treats are so good, it’s pretty much impossible.

Accompanying the salami is a cheese snack called Oyatsu with Camembert. “This is actually fish surimi with cheese. Anything that has cheese in it is popular, really, and people buy large boxes of it.” 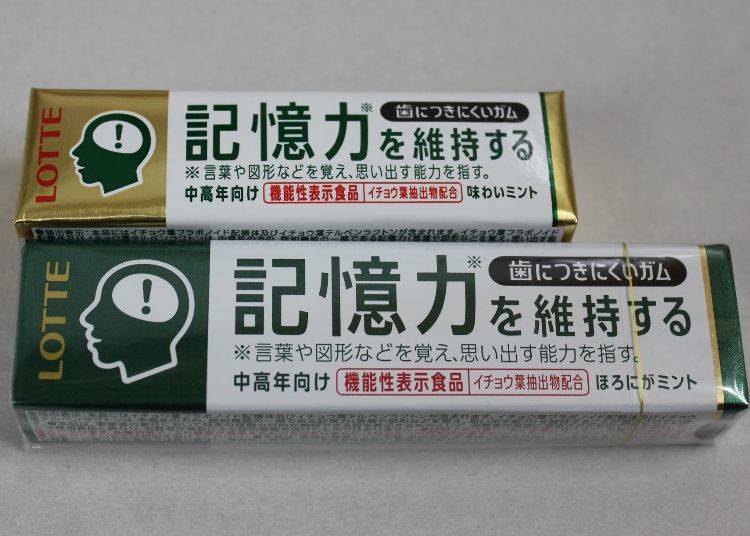 The top gum is in stick shape, the bottom is in pellet shape. Both taste like mint. (115 yen each)

“Functional food generally is something that Japan is known for. You know, such as suppressing fat absorption, against high blood pressure, to help with various mental function.” This ‘functional’ food is specially labeled, clearly indicating what benefit can be expected from it. The manufacturer is required to base their product on scientific research and has to release detailed information about it to the public.

A recent hit product of this category is the <kioku-ryoku o iji suru|i@> gum, which literally means “memory maintaining gum.” It is designed for middle-aged people and seniors and promises a positive effect on the ability to remember and memorize things.

Another characteristic of this gum is that it doesn’t stick to one’s teeth, a feature that is quite valued in Japan. This gum comes in both a stick and pellet type, both of which are very popular. “I’m not sure if people specifically look for these kinds of sweets or if they keep an eye out for new releases, but as soon as this product came out, we had international customers showing us pictures of it and asking for it. That surprised me.” 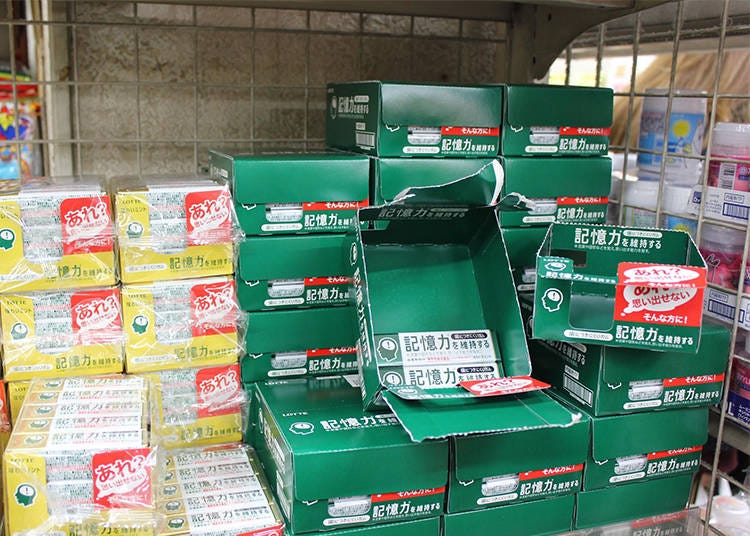 The empty boxes speak volumes about this gum’s popularity.

Looking at the ranking of Niki no Kashi’s best sellers, it is evident that everyone loves chocolate. Especially combined with cookie and biscuit, there’s just no resisting the sweet creations. The odd one out of the top 5 is Umaibo, the corn snack, but the salami and cheese snack represent a general desire for savory flavors. Nonetheless, sweet wins over savory with plenty of chocolate creations dominating the top 10.

Especially Asian tourists often visit Niki no Kashi with the entire family. “The mom, the dad, two children. Or a mom and her daughter, we see that a lot. If you make a purchase of over 5,000 yen, you can get a tax exemption, so a lot of people aim for this and buy in bulk. There’s a tax exemption counter on the second floor, so we help with the procedure.” On top of that, a lot of shoppers make clever use of photo and video functions of their smartphones, asking for specific products by showing images or videos.

“So many people come here to shop. It’s a different way of shopping, searching, and a different passion. Thank you so much.”

*All prices are Niki no Kashi's and are excluding tax.

Shopping at Narita Airport! Top 5 Souvenir Selection for Tourists
Tokyo souvenirs: 10 top-selling Japanese spirits, sake, and more at Narita Airport!
*This information is from the time of this article's publication.
*Prices and options mentioned are subject to change.
*Unless stated otherwise, all prices include tax.