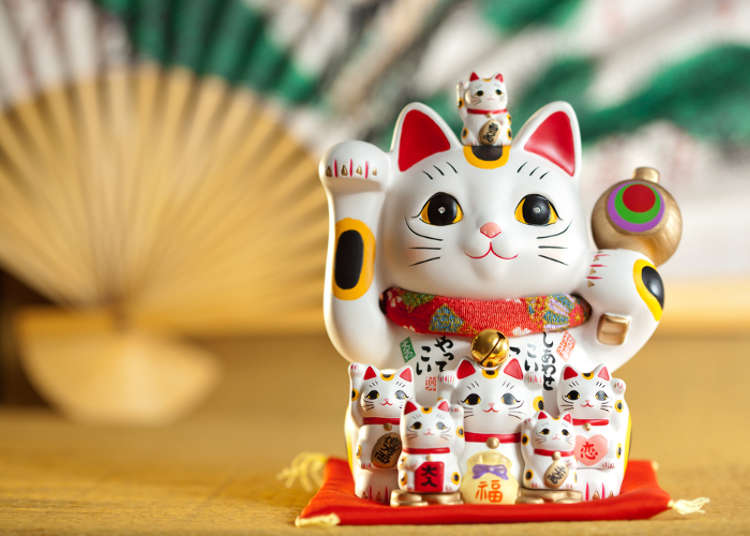 Have you ever encountered a maneki neko? In English, these are also commonly referred to as 'lucky cats' due to their use as a kind of talisman, or lucky charm. These whimsical cat figures have become one of Japan's most recognizable symbols. The name 'mankei neko' can be attributed to the cat's welcoming paw, as the literal translation is 'beckoning cat.' 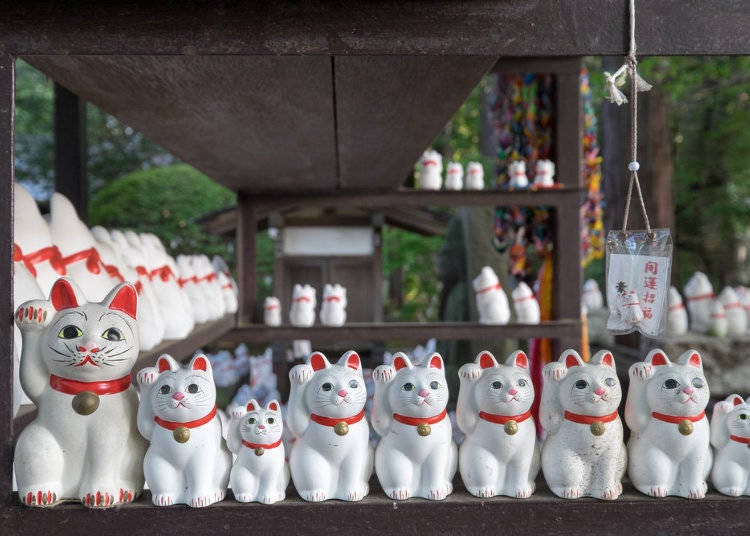 Lucky cats are most often ceramic, however, you may find them made from any number of materials–from wood or plastic, to luxury lucky cats made from jade or gold. Even in modern times, maneki neko are still prevalent in Japan. It’s not uncommon to see the statues in shrines, or as decoration. You also may find their slow-waving, mechanical paws welcoming you to restaurants, pachinko parlors, and other businesses across the country. 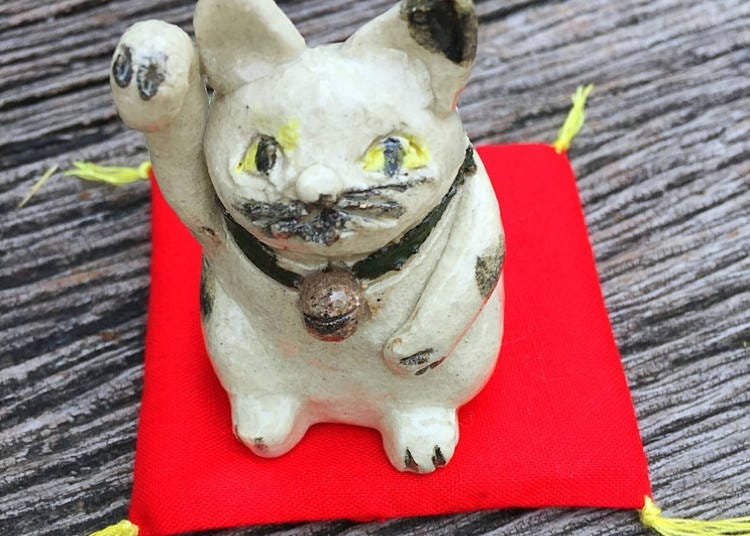 When trying to pinpoint the exact origin of the maneki neko, the only thing that can be concluded is that its birthplace is uncertain. There is debate as to whether the cats were originally created in Tokyo or in Osaka, although it is generally agreed upon that they were first seen sometime in the late Edo Period. The uncertainty regarding maneki neko's history has led to quite a few different legends explaining its beginnings.

The Accessories Make the Lucky Cat 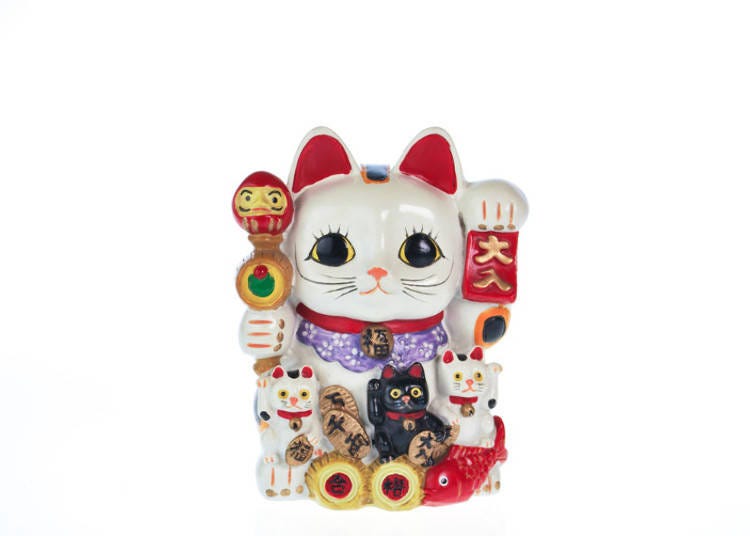 If you look closely at various maneki neko, you'll notice certain items that are frequently held or worn by the cats.

・Neck decorations: You'll rarely see a lucky cat with an unadorned neck. Collars, decorative bibs, and bells are all common neck ornaments for maneki neko. Like today, the real pet cats of the Edo Period wore collars with bells to allow their whereabouts to be easily tracked. As for the bibs, it has been speculated that they are related to those worn by Buddhist jizo statues.

・Coins: Maneki neko often hold a koban, a gold coin that was used in the Edo Period. A koban was worth one ryo (roughly $1,000 USD by today's standards), Japan's monetary unit of the era. You may even see a cat holding a coin marked 千万両 which is ten million ryo, an incredible amount of money, especially for that time period!

・A carp (koi), or other fish: This is thought to be a symbol of fortune and abundance.

・Money Bag: This symbolizes luck, along with wealth.

・Marble or Gemstone: One of these in the paws of a lucky cat symbolizes wisdom, as well as wealth.

・Fan or Drum: Both of these objects represent luck with business. The drum specifically, is a symbol of a shop that is overflowing with customers.

・Hollowed Gourds (hyotan): These were as containers for sake and over beverages, often used by another of the Seven Lucky Gods, Fukurokuju, the god of wisdom and longevity. It is believed to ward off evil and bring good luck.

While these are some of the most common lucky charms you might find on a maneki neko, there are plenty of other objects that have been associated with them as well.

Making a Statement Without Making a Sound 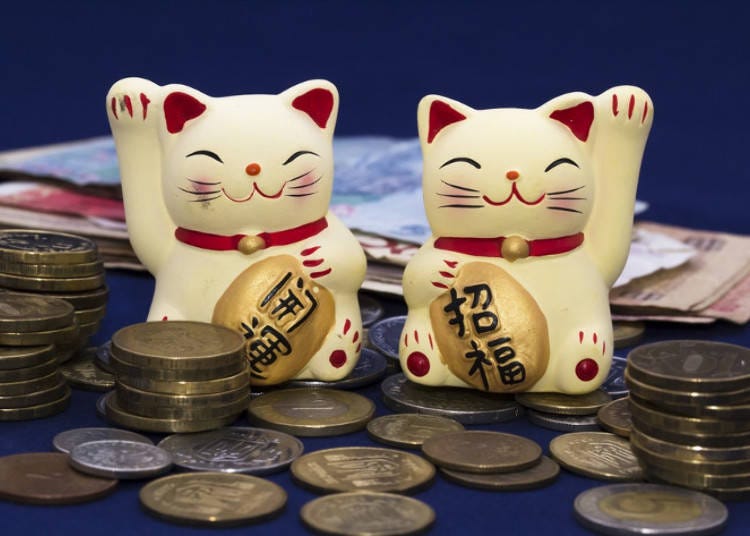 You can tell a lot about a maneki neko by examining its gestures, and one of its defining characteristics is its raised paw. You can see lucky cats raising the left paw, right paw, or occasionally, both. The positioning of the paws is more than just an artistic choice. There is a distinct meaning and belief behind each gesture, although the those may differ depending on who is asked. Generally speaking, the the lucky cat gestures are as follows:

・Right paw raised: Brings wealth and good luck
・Left paw raised: Attracts customers to a place of business
・Both paws raised: Provides protection
The higher the paw is raised, the more luck the cat is said to invite! 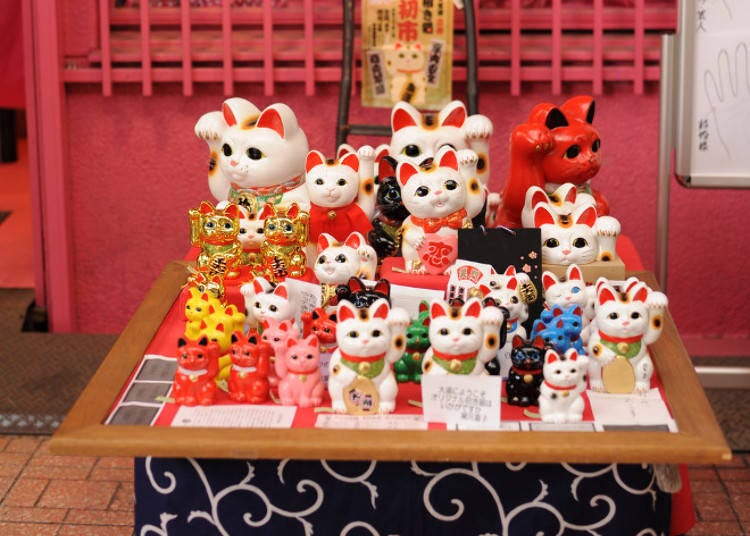 While most often seen in the original Calico form, maneki neko are also available in a rainbow of different colors. As with gesture and ornamental variations, these too are symbolic, with each color associated with a different form of luck. The following color attributes are said to be as follows:

Based upon all of the aforementioned variations, you can choose the lucky cat that is best for you!

Maneki Neko - From Japan to Across the World 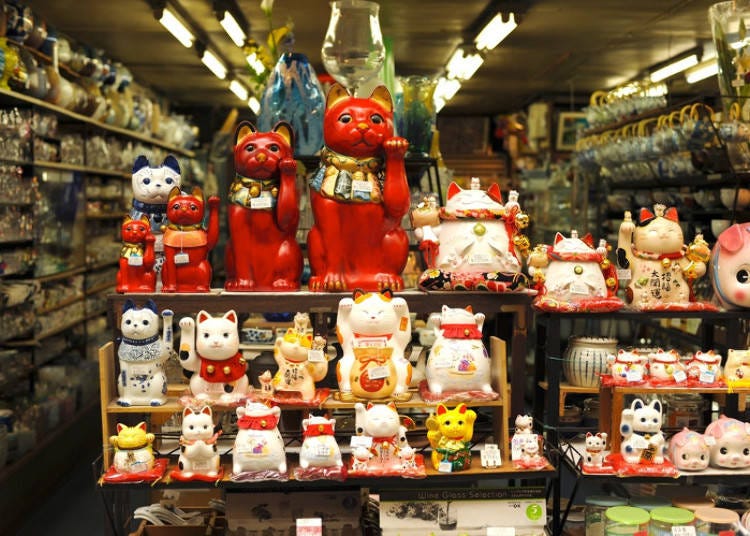 Maneki neko have also appeared in various forms in pop culture. The cats have been found in literature, anime, and even video games. These cats have become ubiquitous, popping up in just about every continent. Maneki neko have become a favorite among fans of Japanese culture, as well as those with an interest in good luck charms. They can be found in nestled among the trinkets in Asian specialty shops, or as decorations at Japanese Festivals across the world.

Gotokuji: The "Lucky Cat" Temple
*This information is from the time of this article's publication.
*Prices and options mentioned are subject to change.
*Unless stated otherwise, all prices include tax.