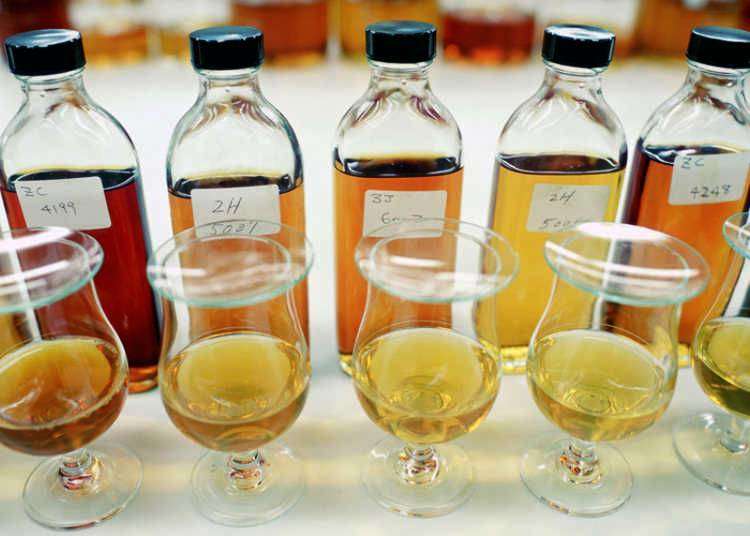 Authentic and Unique: Why Japanese Whisky is an International Success

There are quite a lot of things from Japan that are internationally acclaimed and sought after – and in recent years, whisky has become one of them. In fact, Japanese whisky brands even managed to win a lot of international awards.

Even the Japanese youth has started drinking whisky as one of their preferred drinks, be it mixed with soda as a highball, or mixed with ginger ale or coca cola for a long drink. Whisky is becoming a national beverage!

I also like the highball – it goes great with pretty much any kind of meal, right? 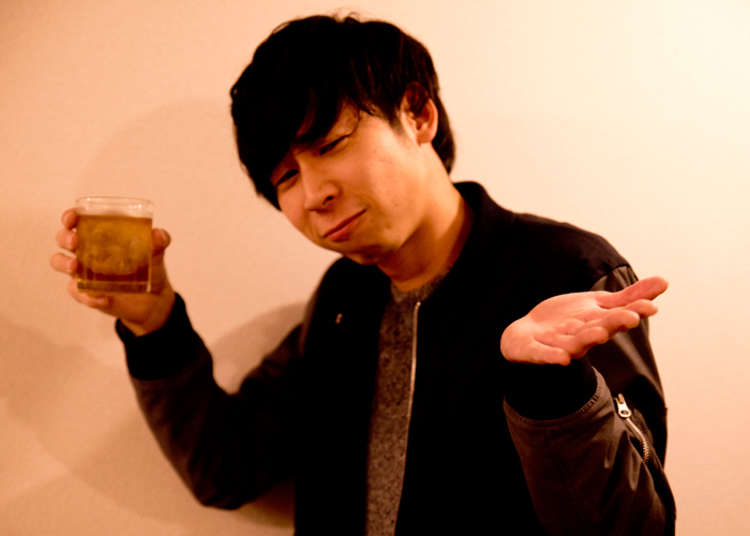 ...but, I actually don’t know anything about whisky!

Whisky is popular all over the world but I have the impression that in Japan, a lot of people who drink it aren’t necessarily connoisseurs. When comparing different brands, though, shouldn’t you know a bit about how to enjoy the taste and aroma?

And even though there are so many great whisky brands available pretty much everywhere, all I do is drink highballs – what a waste!

So, I decided to look into the matter and ask Suntory, one of Japan’s most famous whisky makers, about how to properly enjoy whisky.

Japanese Whisky – is it really that great?

Matsumoto: Thank you for taking the time to give me an interview!

Motoyama: No problem. My name is Motoyama, of Suntory Spirits’ Import Liquor Department.

Matsumoto: First off, can you tell me why Japanese whisky is so amazing?

Motoyama: Matsumoto-san, do you know the World’s Five Greatest Whiskies?

Matsumoto: Sorry, I have no idea.

Motoyama: Whisky is made in various countries all around the world but those from areas that produce really good whisky are given the title of The World’s Five Greatest Whiskies. And Japanese whisky has been selected as one of them. 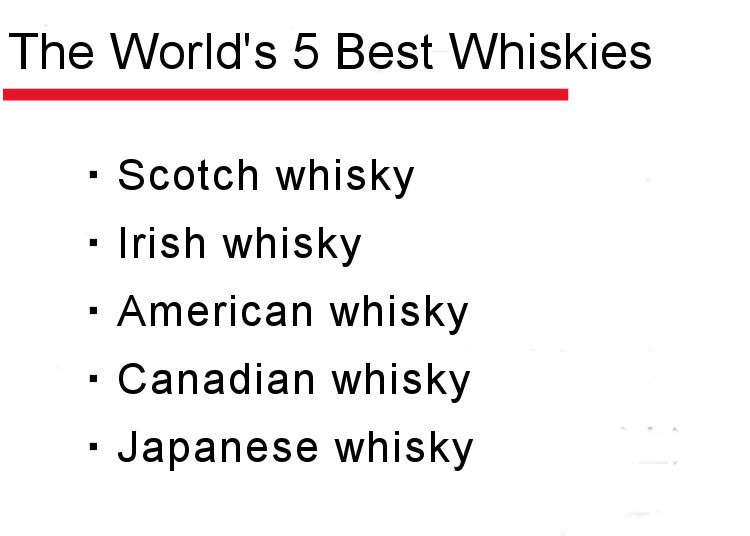 Motoyama: Oh yes, it is. Our own Suntory whiskies have received many awards, even from the global whisky competition ISC, the International Spirits Challenge, as well as the WWA. 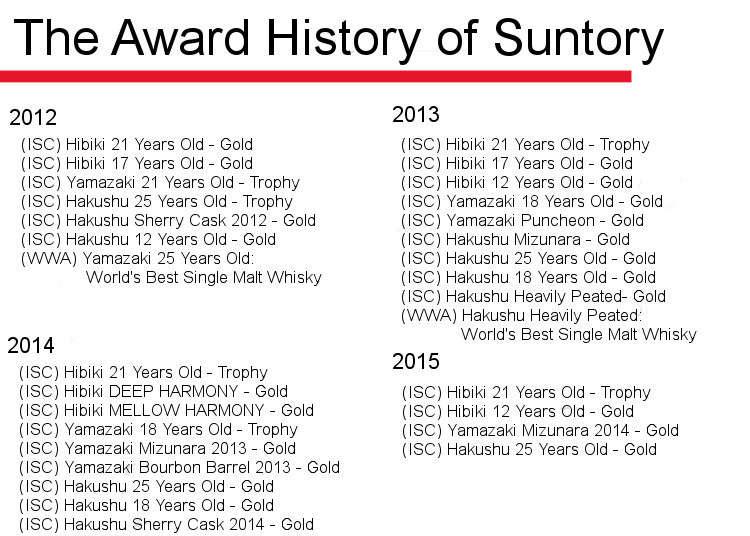 Matsumoto: You’ve won so many awards, do you ever plan to stop?

Motoyama: Not planning to.

Suntory Whisky – Praised all over the World 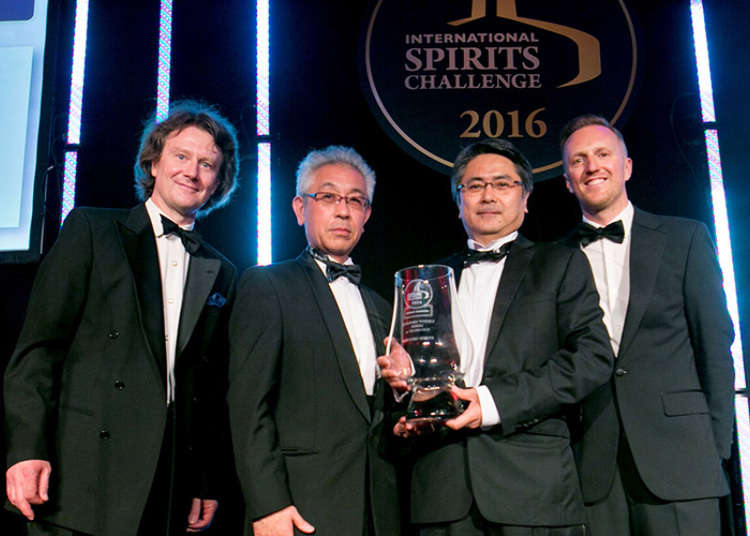 Matsumoto: It’s pretty amazing that Suntory whisky has won so many international prizes. Are you actively aiming for them?

Motoyama: We are, and we also value our overseas competitors. Especially in the aforementioned International Spirits Challenge, ISC, we received a lot of awards for Hibiki and Yamazaki whiskies.

Matsumoto: Wow, that was over ten years ago. I had no idea that Japanese whisky was that famous... Especially the “Hibiki” whisky has become very popular in the last five years. Can you tell us a bit more about it? 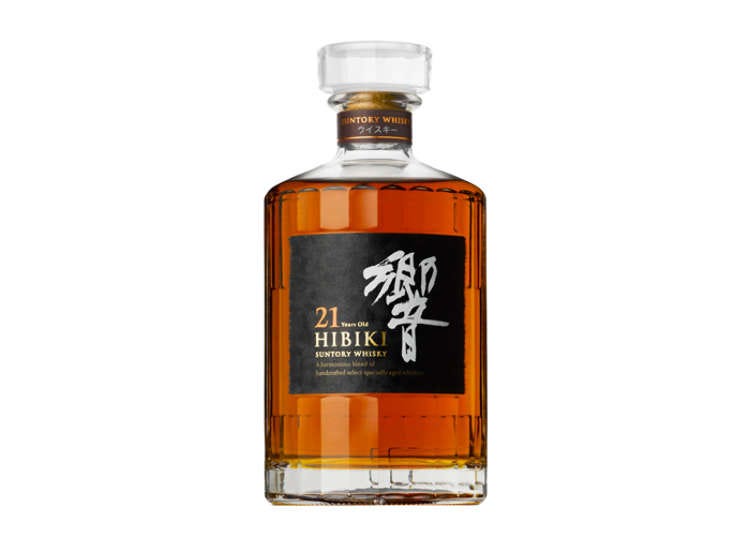 Motoyama: Suntory operates three places: the Yamazaki distillery, the Hakushu distillery, and the Chita distillery. Every one of these distilleries has very distinctive features, making a variety of whisky products that age in barrels for years and undergo rigorous quality controls. Hibiki is a whisky that is carefully blended from these aged unblended malt whiskies.

Matsumoto: What is an unblended malt whisky?

Motoyama: That term refers to a whisky straight from the barrel that has not been blended.

Matsumoto: Does that mean that Hibiki is blended from the unblended whiskies made at the different distilleries? Does this also take several years?

Matsumoto: That is quite amazing.

How is Suntory Whisky Made? 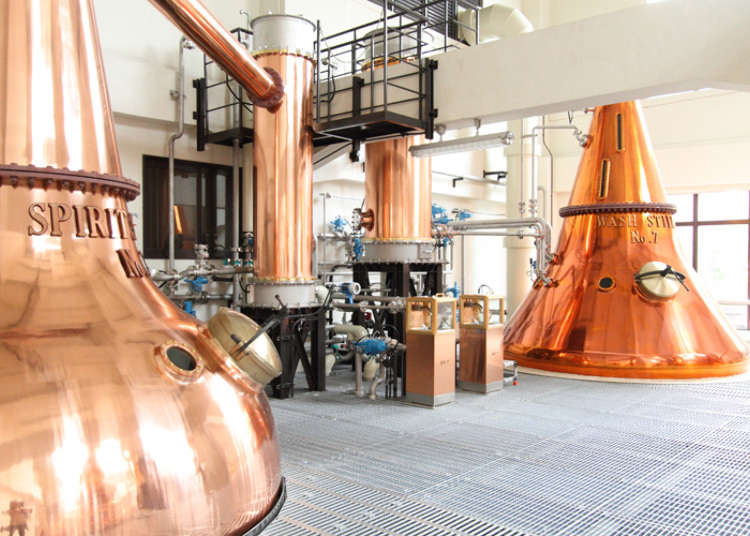 Matsumoto: What are the particularly difficult steps of whisky making?

Motoyama: Unlike beer and shochu, whisky requires a process called aging. This process alone can take up to several decades.

Matsumoto: When I heard “Hibiki” [which means echo in Japanese], I imagined a very subtle and delicate way of making the whisky. And as for aging, I thought you just put it in the barrel and that’s it...

Motoyama: Not at all! Whisky is very much alive so even if you use the same barrel at the very same spot, the end results after aging can be vastly different. Regarding this, the quality control during the aging process can be one of the most difficult things.

Matsumoto: “Whisky is alive”... I noted that down. So, as for the whisky making, is Suntory’s distinctive character included in it?

Motoyama: Suntory has various different whiskies, from premium products such as Hibiki and Yamazaki to Kakubin [literally “square bottle], a whisky that can even be enjoyed at home. Suntory’s characteristic is making these kind of very different unblended whiskies in one distillery.

Motoyama: Yes, of course. There are various different types of stills for whisky making. However, different fermentation and aging methods also matter.

Matsumoto: Ah, alright. Fermentation, distillation, and aging all have different methods respectively. And if you change their combination, you can create dozens of different spirits...

Motoyama: At Suntory, we make around 100 different kinds, yes.

Motoyama: Yes. The whiskies are blended from a large variety of unblended products, and compared to whiskies from overseas, Japanese blends have a subtle and mild flavor.
Shinjiro Torii, the founder of Suntory, started to make whisky with the goal to create a product that matches the taste of Japanese people. I do believe that this philosophy is the heart of Suntory whisky and its mild flavor.

Matsumoto: I feel like this founding philosophy that still influences the whisky today is part of the reason why Japanese whisky is highly valued internationally. 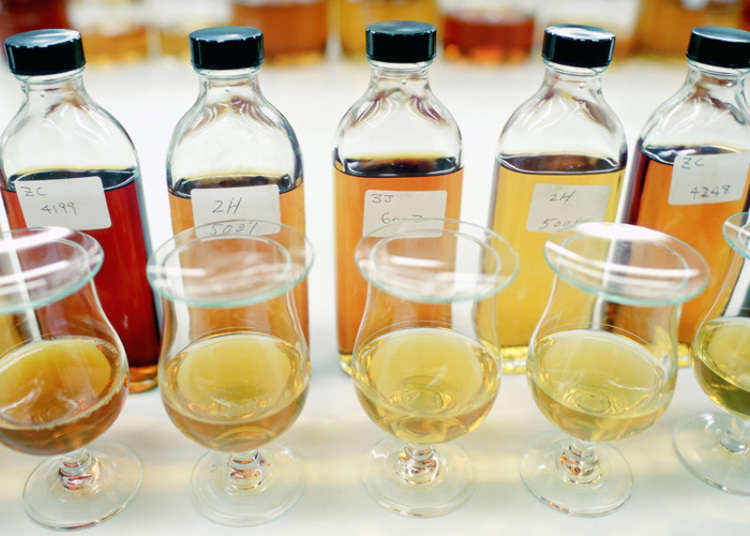 Matsumoto: You kept mentioning quality control a lot throughout our conversation, so there seems to be a rather thorough commitment. How do you make sure that this taste quality control is following the same standard? Artificial intelligence?

Matsumoto: Master blender, that sounds pretty neat. Does only one person hold this title?

Motoyama: Yes, only one person. The first one was Shinjiro Torii, the founder of Suntory, and the second one was Keizo Saji, his son. And the third generation master blender is his grandson, Shingo Torii.

Matsumoto: Wow, so even after becoming a huge company, the final say when it comes to quality is still in the hands of the founder’s family. That’s amazing.

Motoyama: Yes, because Suntory is a whisky family business.

How to Properly Drink Suntory Whisky?

Matsumoto: On a different topic, a lot of young people, including me, drink highballs quite often. But I have the impression that whisky is generally enjoyed straight overseas. So... what’s the proper way to drink whisky?

Motoyama: At Suntory, we want our whisky to be enjoyed alongside food. Although our whisky is delicious all by itself, we actually make it with this thought in mind.

Matsumoto: Oh, so you actually recommend it to be ordered with water or in a highball?

Motoyama: No, that’s not the case. Everyone has a preferred way of enjoying whisky. One characteristic of Suntory whisky is that the taste doesn’t change when mixed with water, compared to brands from overseas. That’s what I mean when I say that it is primarily made to be enjoyed with a meal.

Matsumoto: Ah, I see. So it’s not just for connoisseurs but also for casual whisky drinkers.

The Future of Japanese Whisky 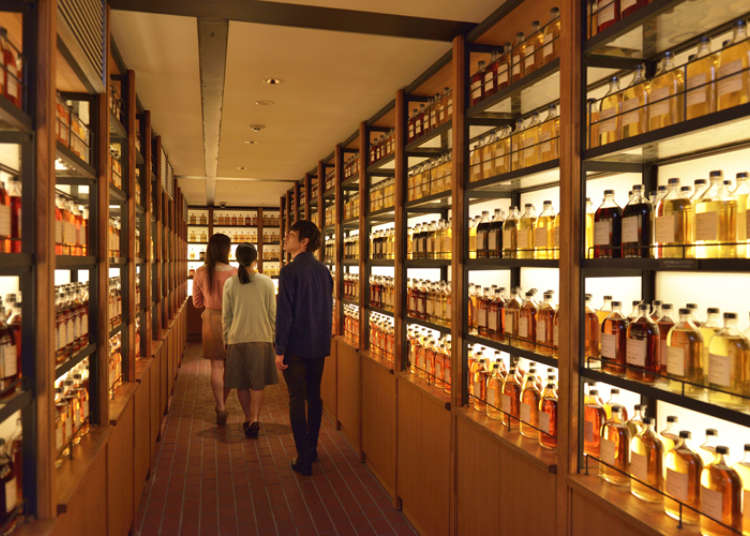 Matsumoto: I learned quite a lot! On a final note, could you talk to us about future prospects and plans?

Motoyama: Our aim is to further raise the brand’s value both on a domestic and international level, to elevate Suntory whisky to a unique and special position.
Even when compared to international whisky makers, it is difficult for Suntory to win by sheer volume. This is because we value quality over quantity.
We want to distribute our high-quality product on a global level, while still maintaining the focus on quality. These are our two main goals for the future.

Matsumoto: I think that the value of Japanese whisky will continue to rise from now on. With Suntory’s lead, I expect that a lot of other Japanese will start making whisky.

Matsumoto: Authentic Japanese whisky… you really do have a passion for it, don’t you?

Motoyama: Of course, because Suntory is a whisky family business. (laughs)

Matsumoto: Thank you so much, Motoyama-san!

So yes, I definitely understood that Japanese whisky is rather amazing, with over one-hundred different whisky products and the founder’s family as the ultimate judge on the perfect taste!

Even so, there’s no need to treat Japanese whisky overly precious, as Suntory has put a lot of thought into creating whisky for everybody. Whether you want to relax with a glass of straight high-quality whisky or just leisurely enjoy a highball with a good meal and lots of friends – there’s just the right Japanese whisky for you. 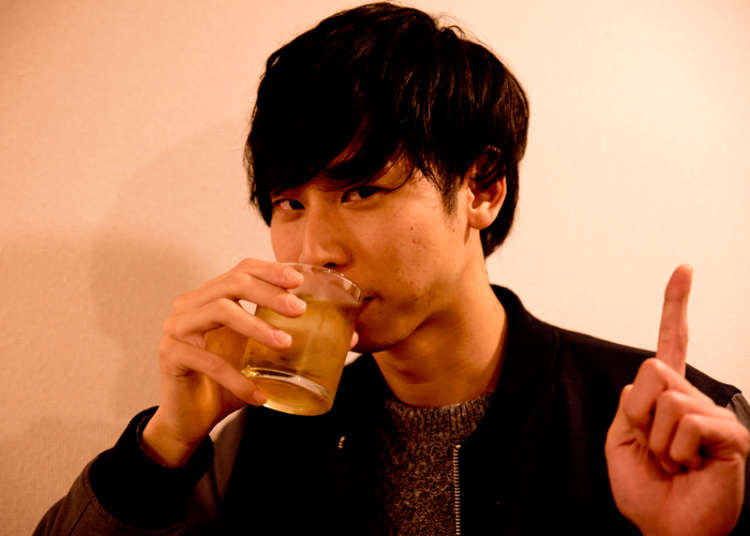 At first, I wrote that it’s kind of a waste that I drink nothing but high balls. However, that’s not the case at all! The most wasteful thing would be to not enjoy whisky at all, so let’s head home and enjoy just that: an amazing highball!

Shinpei Matsumoto
I was born in and grew up in the city of Yokohama.