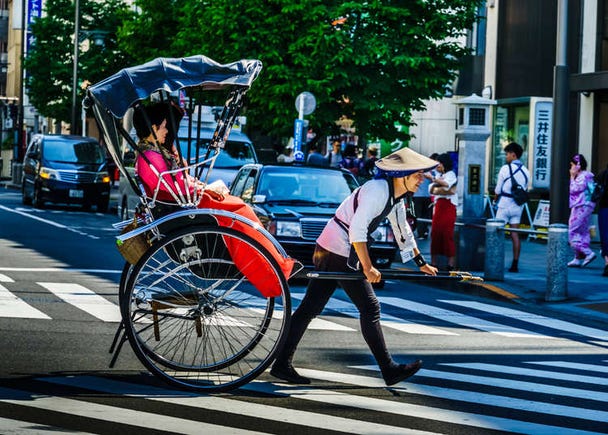 Top 10 Places to Visit in Tokyo Once in Your Life

If you’re looking for inspiration for what to see in Tokyo, find out what these 10 locals recommend.

Tokyo is always said to be the place where “old meets new”, meaning there’s pretty much something for everyone. But in a city with something for everyone, how do you choose where to head first? Where are the best places of all – the must see, unmissable, bucket list worthy Tokyo destinations? We asked 10 Tokyo residents to tell us their favorite spot and why. Here is what they said. 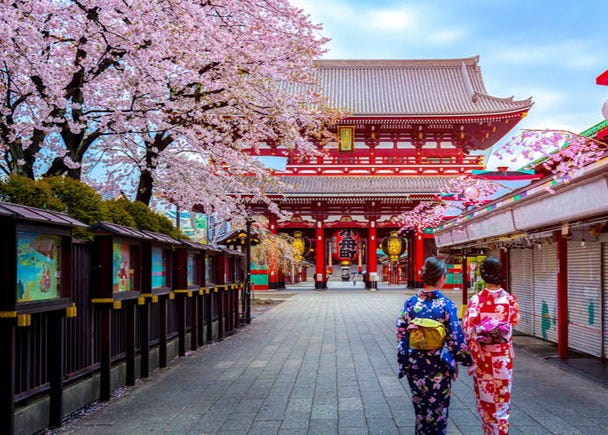 Located in popular tourist area Asakusa, you might have already heard about Sensoji Temple, the oldest Buddhist temple in Tokyo. According to Tanya, “although the overall vibe is quite touristy, it never seizes to make me think of the Japanese history, culture, beliefs and traditions”. Pass through the famous Kaminari Gate and enter the Nakamise Shopping Street, a popular street full of souvenirs and traditional-style Japanese snack stalls. What people often miss however is the Denboin Dori, an adjacent street to the west of Nakamise that is quieter and has many traditional shop buildings dating date back a hundred years or more. 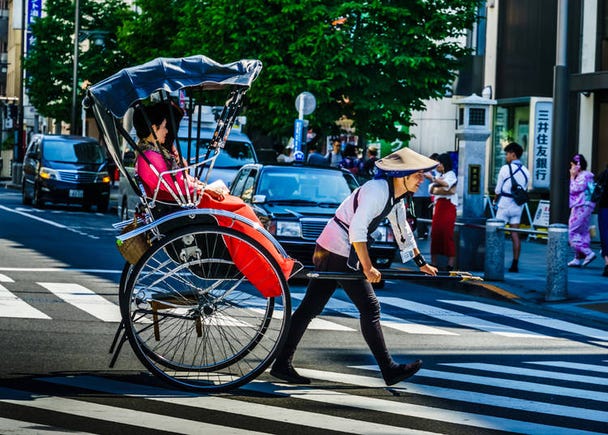 Tanya recommends renting a kimono and taking a ride in a rickshaw to get the most out of the area. If you walk beyond Sensoji Temple in the direction of Minowa, you can find the Yoshiwara District, a former red light district that was created in the 17th century by the Tokugawa Shogunate. Alternatively, after you’ve explored Sensoji Temple and the nearby shopping areas, Tanya recommends “stopping by Tokyo Sky Tree to get a great view of the city” and “trying out a water bus, which runs along the Sumida River just a step away from Sensoji”. 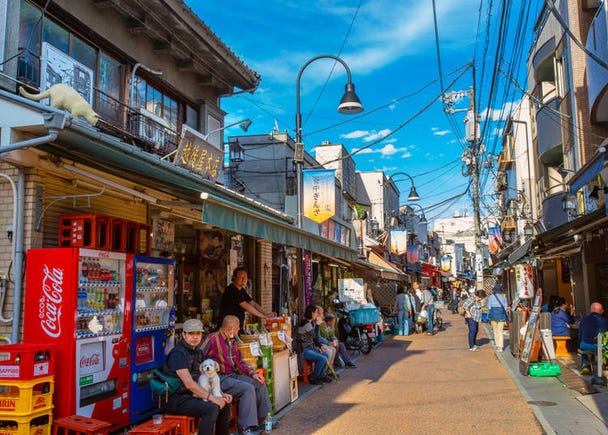 One of the few areas in Tokyo that wasn’t hit in the air raid, the Yanaka area contains beautiful old homes, temples and the best cemeteries. Sarah says there is “nothing better than a leisurely stroll through the streets of Yanaka, exploring the cemeteries and seeing headstones of famous people.”Yanaka is located near Nippori Station, which is easy to reach using the JR Yamanote Line. It’s a good place to come for half a day to stroll around all the winding streets filled with cute little shops and cafes, or explore one of the many shrines and temples in the area. For Sarah, there is < “a hidden treasure behind every corner. Old stores still alive and interesting foreigners running restaurants and ateliers.”|i@> 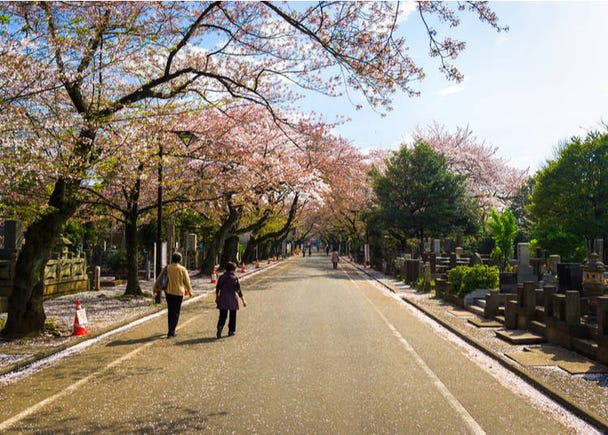 Sarah recommends coming in Spring time to see the “amazing cherry blossoms with views of Sky Tree”. She especially appreciates the “cats everywhere to pat” and the “locals who take the time to chat”. 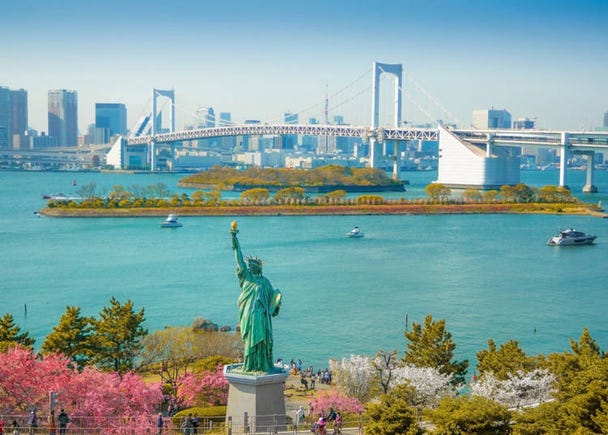 If you want to see Tokyo at its most modern, you should check out Alexander’s suggestion – Odaiba. He chose it because “it's amazing to see how the waterfront area has been developed (the island is reclaimed land) into a pleasant residential and entertainment district.” You can reach Odaiba by taking the Yurikamome Monorail from JR Shinbashi Station – try and sit in the front seat so you get the best view of Rainbow Bridge, an illuminated bridge especially pretty at night! 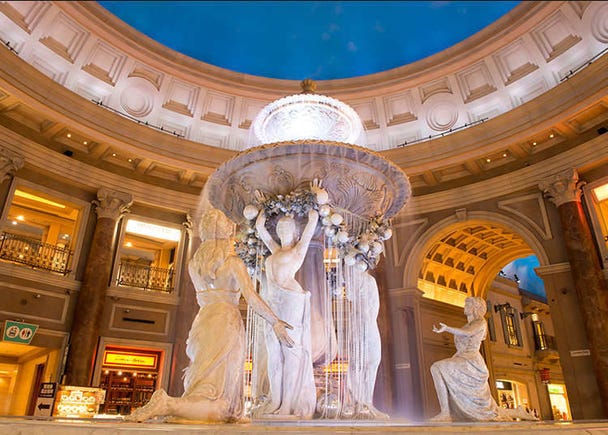 There is so much to do in Odaiba, Alexander recommends “Oedo Onsen Monogatari, Joypolis, Team Lab, and Palette Town”. He loves taking visitors to Venus Fort, a realistic looking Venice themed shopping center where the ceiling mimics the sky, changing from day to night intermittently.Odaiba will also be one of the venues where the public can view the Olympics. 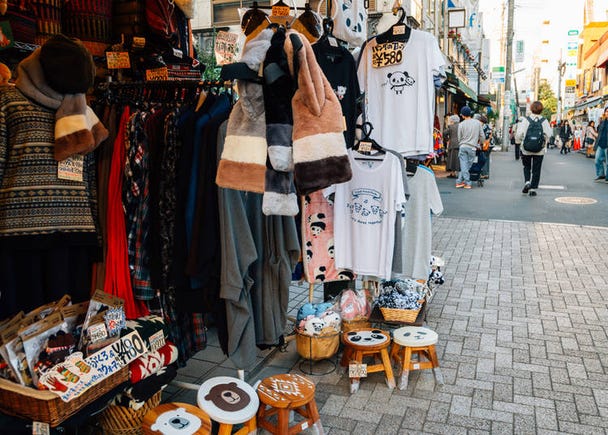 Kichijoji, located a short train ride from Shinjuku on the Chuo Line, has been consistently picked as one of the best places in Tokyo to live. According to Anne, “it has the vibrant, lively atmosphere and the interesting youth culture that Harajuku used to have without being overrun by tourists.” You can explore a myriad of hidden shopping alleys and old style izakayas, all still very much “local” feeling. 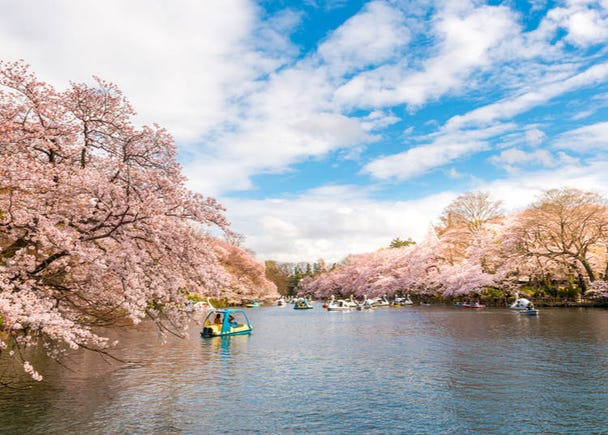 Anne likes that “there are many vintage shops, places to buy Japanese goods and cute cafes.” She recommends going on Sunday and “going a little further to Inokashira Park, where there are a lot of street artists who show their skills”. Inokashira Park is also very close to the Ghibli Museum, a very popular anime museum, as well as a good zoo for kids. 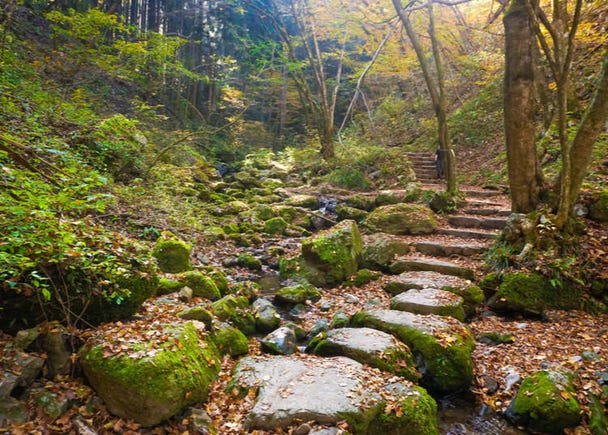 “Mount Mitake in West Tokyo is a great escape from the busy city”, she says. It’s located in West Tokyo about 90 minutes away from the city by train. The mountain is home to the Musashi Mitake-jinja Shrine where climbers can go to worship, but the real highlight are the many “picturesque hiking routes, waterfalls, rock gardens and calming green trees all around”. She really likes to “spend the day hiking, then go to a nearby town to relax in an onsen” (hot spring). 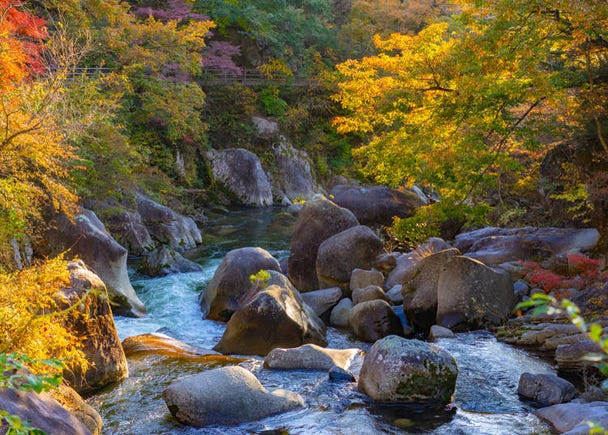 To start the hike, first take a bus from Mitake Station to the cable car stop. There are many trails, so make sure to stop at the visitor center (located near the cable car station) to grab a map. 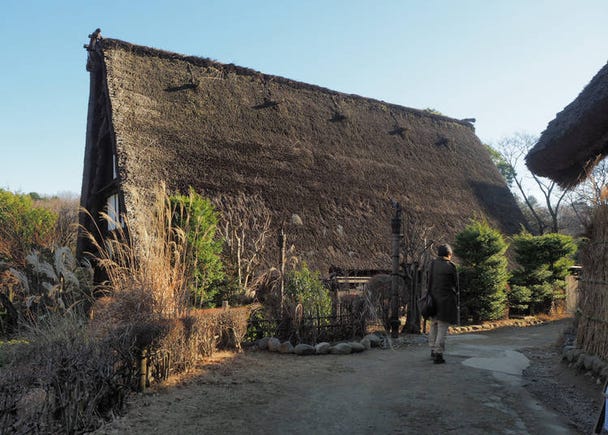 While not technically in Tokyo, the Nihon Minka-en (Japan Open Air Folk House Museum) is located in Kawasaki, just on the outskirts of Tokyo in Kanagawa prefecture. It is an open air museum with numerous old Japanese folk houses that have been collected from all over the country. Diane recommends it as it’s in a “lovely location in a big park surrounded by forests” and “you can see what it was like to live in a Japanese village in the 17th century”. The park is home to old houses, farm buildings and merchant houses, along with a water wheel, kabuki stage and samurai gate. And they’re not just for looking, you can “enter the buildings and experience the inside, with their simple mud floors and open kitchen hearths”.

They have English pamphlets and signage and if you book two weeks in advance, they can arrange an English tour. Walk 13 minutes from Mukougaoka-yuen Station (Odakyu Line) or 25 minutes from Noborito Station (JR Nanbu Line) to reach the park. 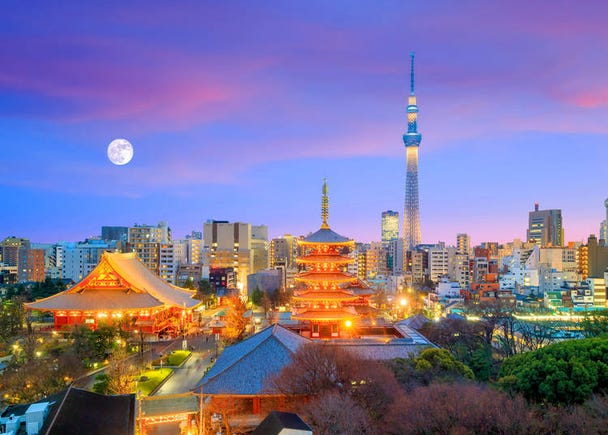 As someone who has been living in Tokyo her entire life, Hiromi thinks that Tokyo Sky Tree should be seen by everyone. Although she admits that “it is kind of touristy”, she goes “every year on January 1st to watch the beautiful sunset from the 450m observation deck”. Certainly a nice way to start the new year! 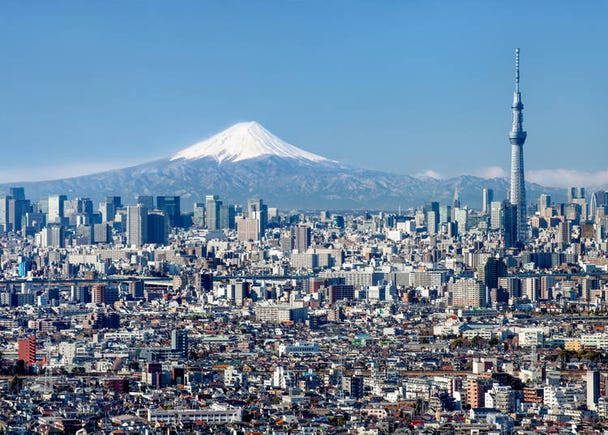 Skytree is the tallest tower in Japan, with two paid observation decks. At its base is a large shopping mall and an aquarium. If you have kids there is also the Kodomo no Yu center, which is a play center designed to look like a Japanese onsen (hot spring). It has lots of role play toys and stalls, and some giant ball pits. If you fancy some peace and quiet after exploring the tower, you could go to the nearby Oshinari Park which is a green park spread out along the Sumida River. 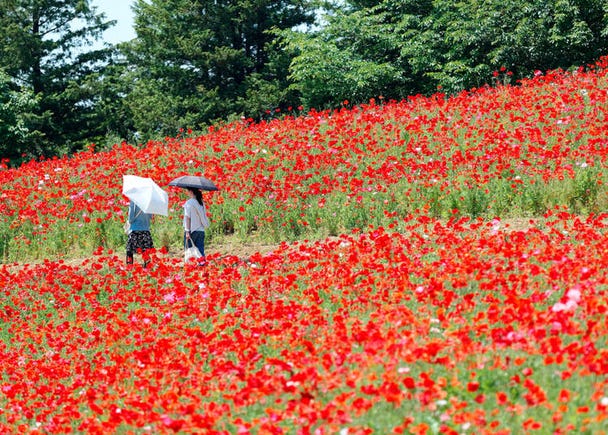 “This park is so good, you can spend all day here” she gushed about Showa-Kinen Park. It’s located in Tachikawa, just a 30 minute train ride from Shinjuku. “Every season they have different flowers on display, like fields of cosmos in Fall, or cherry blossoms in Spring”. Indeed, this park is popular with Tokyo residents both in Spring and Autumn for its wide open spaces and beautiful foliage.

“The best thing to do is rent bikes because the park is so big that it’s too tiring to see it all on foot”. At only 530 yen to rent a bike for the entire day, it is good value for money. As well as all the flowers on display, kids will enjoy the multiple playgrounds, bouncing pillows and Aztec style pyramids which regularly emit mist for children (and adults!) to play in. In summer they even have a giant swimming area. 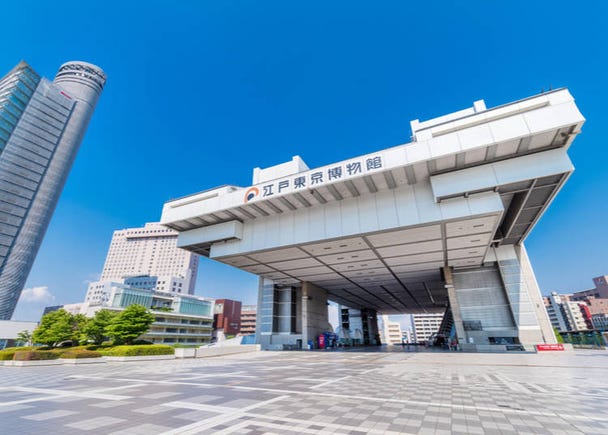 Enrique thinks that as far as museums go, the Edo Tokyo Museum is one to check out. He likes it not only for the museum itself, but “the area also has other things to do like all things sumo and the wisteria shrine”.

The so-called wisteria shrine is the Kameido Tenjin Shrine, which in February, blossoms with beautiful pink plums, while wisteria makes quite the pairing with Tokyo Sky Tree in the background in April and May. In October, chrysanthemums, the symbol of the Imperial House, bloom. 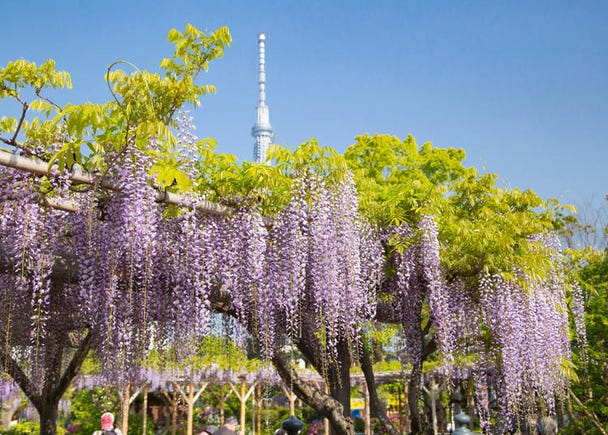 As for the museum itself, located in Ryogoku, it’s a short train ride from Akihabara and in the same vicinity as Kokugikan Sumo Stadium, the Kyu-Yasuda Teien Garden, an earthquake museum and a sword museum. It covers the history of Tokyo from the Edo period until now and features many interactive and interesting exhibits. 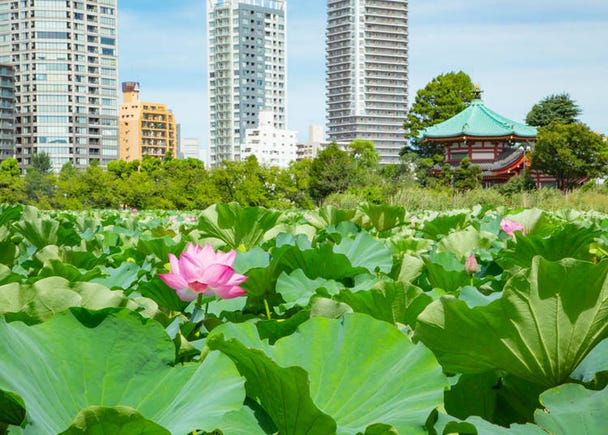 Although Ueno Park is quite well known, the Ueno Toshogu Peony Garden is not. Charli claims it’s one of her favorite places to take visitors, “as long as it’s the right time of year” as “the peony gardens are open in January/February, April/May and September-November”. She says that “Ueno Park is always a nice place to visit, and this can be combined with a tour of the museums and galleries in the park”.

She chose the peony park in particular because “the flowers are protected by the most adorable little paper parasols (in warm weather) and tiny straw thatches (in winter), and you can hear traditional Japanese music playing in the background as you stroll around. It really is the loveliest experience."

How many of these places have you been to? Hopefully these suggestions have given you some ideas for planning the perfect trip!

If you’re looking for some ideas on how to combine some of the places mentioned above, we recommend:

Asakusa – Sky Tree – Ueno – Yanaka
Walk from Asakusa to Sky Tree, then stroll past the Kappabashi cookware street to Ueno Park. After that you can walk all around the Yanaka/Nezu area which is just behind Ueno.

Akihabara – Edo Tokyo Museum – Kameido Tenjin Shrine
Spend the morning in anime-land Akihabara then head to Ryogoku via the JR Sobu Line for some culture.

Showa Kinen Koen – Kichijoji at night
Spend the day at Showa Kinen Park then spend the evening in Kichijoji checking out the shops and many izakaya lanes.

Hello! I am Dara. Originally from New Zealand, I've lived in 5 different countries and have been calling Japan home for the past six years. I love to travel and do outdoor adventure activities and hikes. I've been to 44/47 Japanese prefectures..and counting.