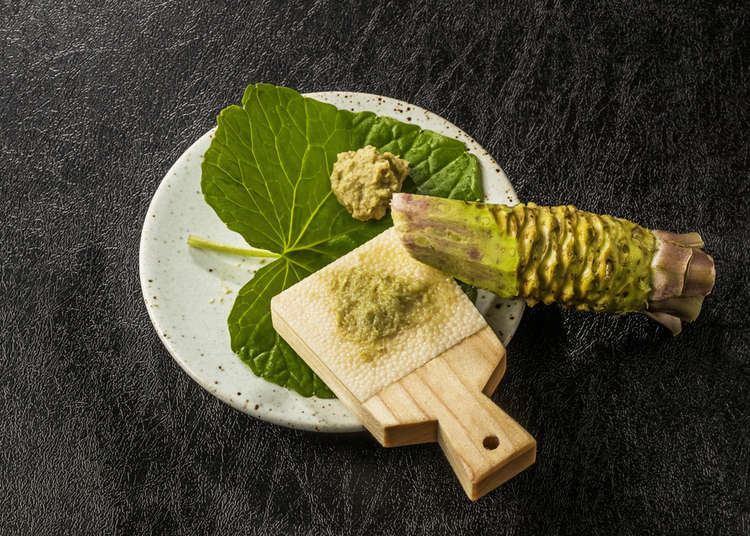 Love it or hate it, wasabi is one of the more well-known condiments served with Japanese cooking, most commonly served with sushi.

Mixed with soy sauce, or served directly on top of sushi, a little dash of wasabi gives a real spicy kick to raw fish but without leaving an aftertaste. According to historical records, Japanese people have been adding wasabi to a variety of dishes for over a thousand years, and today it can be found in most restaurants.

It might seem like a dull green condiment, but actually there are a lot of things that even Japanese people don’t even know about wasabi!

1. Eating wasabi? You're likely eating the stem, not the root! 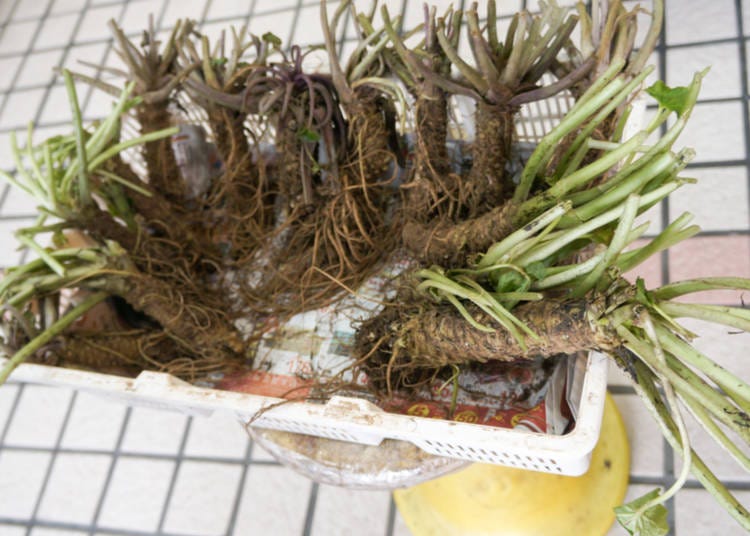 Raw wasabi at the market. Note that the roots have not been removed from the stem, and the leaves are relatively intact.

When you think of a wasabi plant, the image of a chunk of the dull green plant probably comes to mind. Contrary to what you might imagine, however, the part that's ultimately grated up into the spicy green mass that's eaten with sushi is the lower portion of the plant's stem, and not the root!

2. Wasabi is actually something of a cabbage? 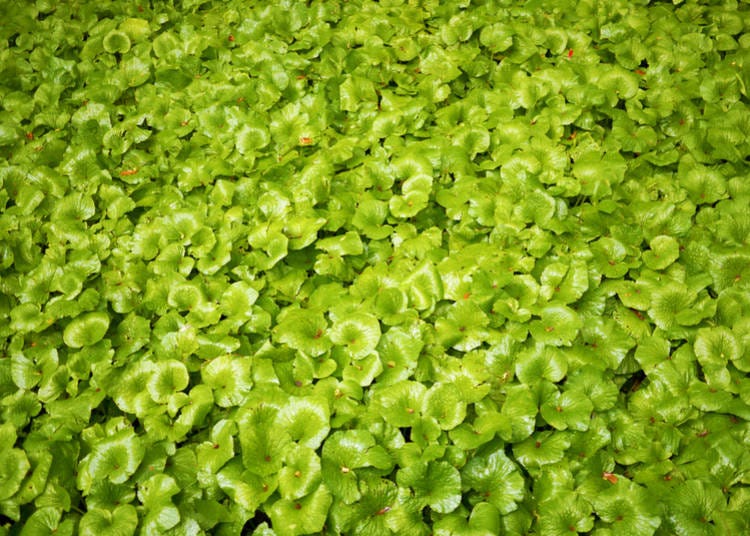 A lot of people tend to think that the wasabi plant is like a Japanese version of horseradish, but actually it is an herbaceous plant (Brassicaceae) which is related to cabbage, as well as mustard and radish. However, calling it Japanese cabbage doesn’t have quite the same ring to it! 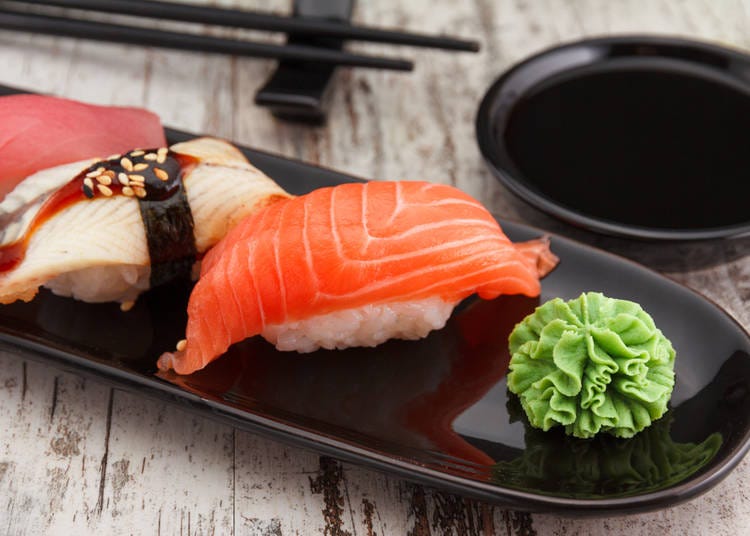 Japanese people didn’t start using wasabi on their food to add a bit of spice to it; actually, they discovered that it had medicinal properties. Eating raw fish or poorly cooked meat could lead to food poisoning because of the bugs which were on the food. However, it was believed that adding wasabi to their food helped against illnesses. This was with good reason as it has been discovered that wasabi contains a chemical called allyl isothiocyanate, now used as an insecticide, and it also has anti-bacterial properties too.

4. It is pretty hard to grow wasabi 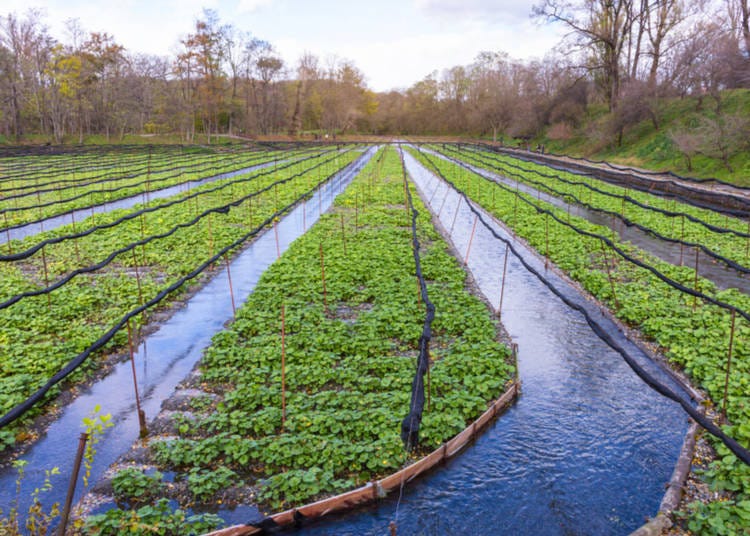 As wasabi is served so generously in Japan, you can easily imagine that Japan is covered in fields of wasabi plants alongside rice plants. However, the wasabi plant needs particular conditions to thrive. In the mountainous terrain of Japan, its natural habitat is in river valleys, protected from direct sunlight and with its roots reaching into running underground water. Also, it will only grow around 1300 - 2500 meters above sea level while it won’t thrive if the air temperature is below 8°C or above 20°C. It isn’t a plant you can just grow in your back garden, and you would have to be pretty determined to want to grow it commercially. 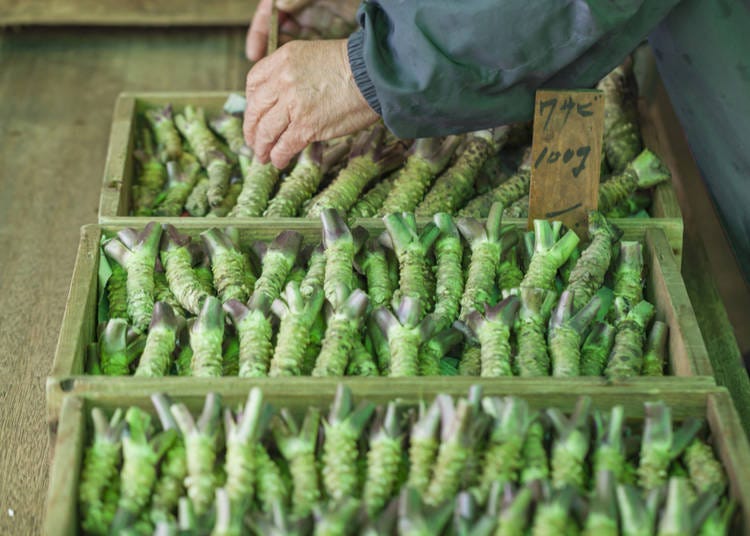 Wasabi is challenging to grow, which means that actually, there isn’t a lot of wasabi plants on the market for sale. Just like any product where there is a limited supply and high demand, real wasabi is pretty expensive to buy. On top of this, Japan has been very successful at exporting its cuisine abroad, so in recent years demand for wasabi plants has really ramped up. Outside of Japan, in 2014, a kilo could cost $160, but year on year, the price has increased by up to 10% so that today some restaurants are willing to pay $300 or more for stock. Even in the country, prices for fresh wasabi can be somewhat steep as well.

6. Wasabi is cheap in supermarkets though! 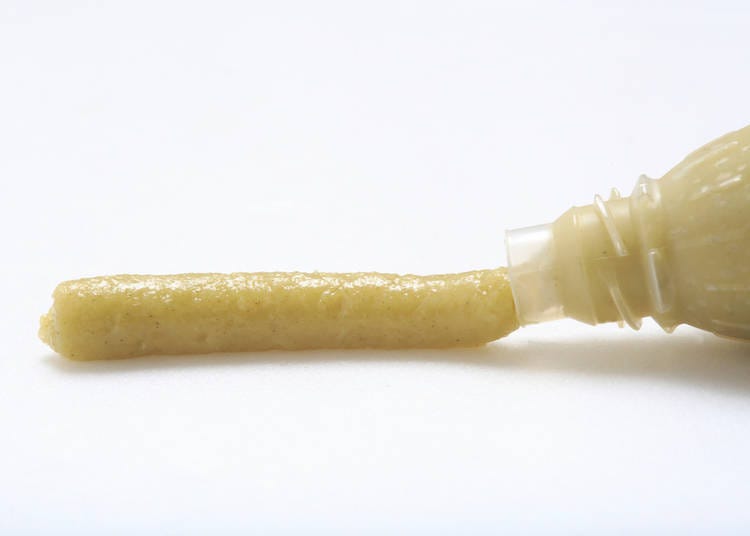 As wasabi is in limited supply and expensive, you are probably wondering why you can easily buy a tube of wasabi for a low price in supermarkets. However, alternative ingredients have been utilized to replicate the taste of wasabi, without using any actual wasabi. If you want to eat real wasabi you have to check out a specialty shop. 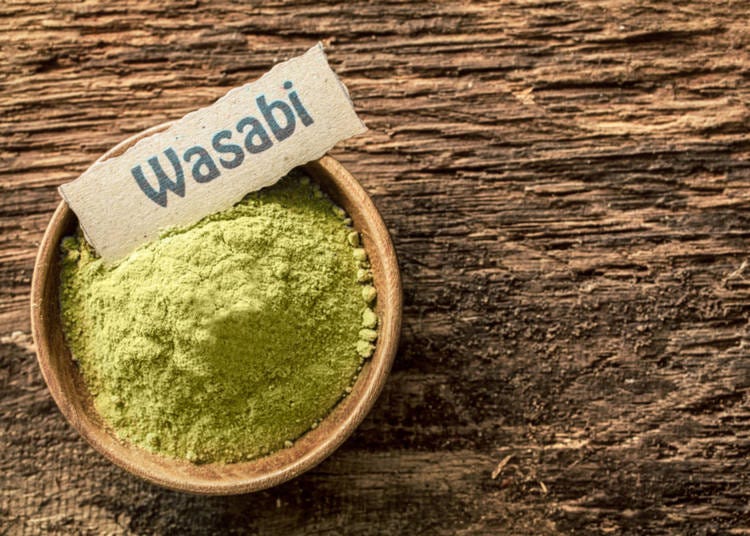 Unfortunately, imitation wasabi isn't limited to the supermarket. Although the number of Japanese restaurants around the world is increasing, and demand for authentic wasabi is also growing, it's said that only around 5-10% of restaurants outside of Japan actually serve wasabi made from the actual plant. Many restaurants create an imitation of wasabi with horseradish, mustard, flavoring, etc., along with powdered wasabi. On the one hand, it means it isn't likely the wasabi you are eating is real, while on the other if a restaurant says they use real wasabi, then you should really savor it!

8. Not just for sushi 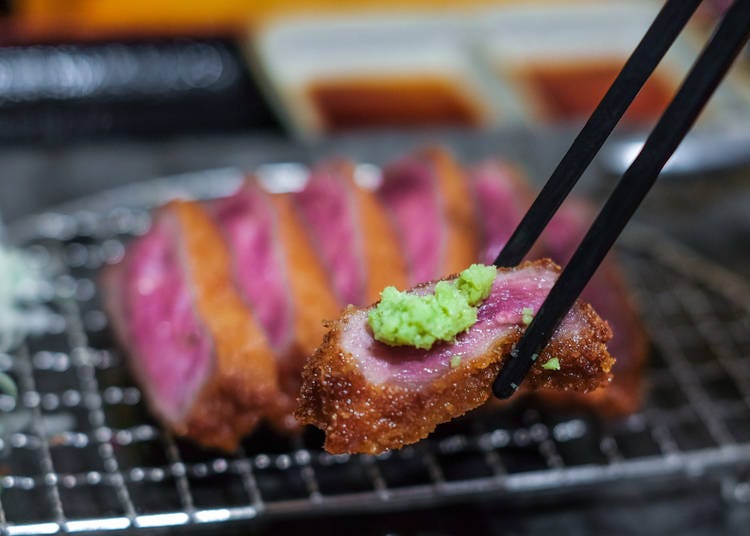 Outside of Japan you will commonly see wasabi just with sushi and sashimi, but in Japan you can find it being used in a lot of other dishes. It is a versatile condiment which can be seen added to soba noodles, to dipping sauces served with yakiniku, wasabi rice bowls, unagi (eel) chazuke, and more. When in Japan be prepared for some wasabi surprises! 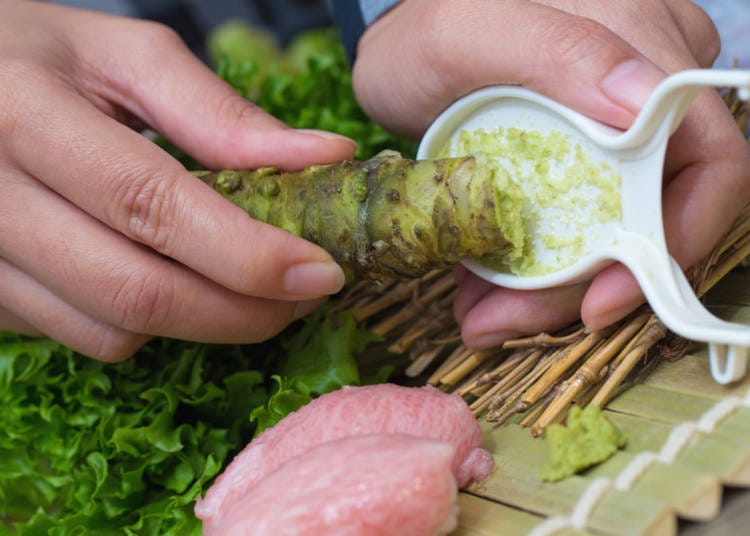 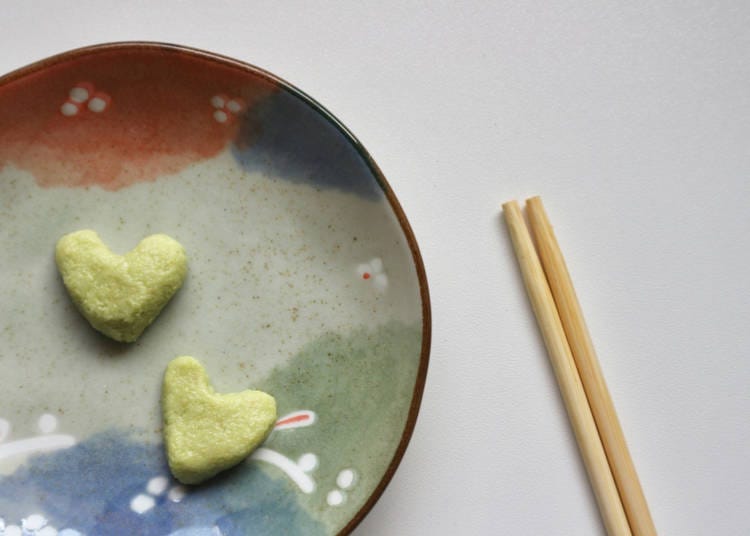 In contrast to the short life of grated wasabi, the actual wasabi stem can keep its flavor for months if properly stored. So, although you should only grate as much as you need when you need it, your wasabi stem, under proper conditions, can last for months and be enjoyed again and again. 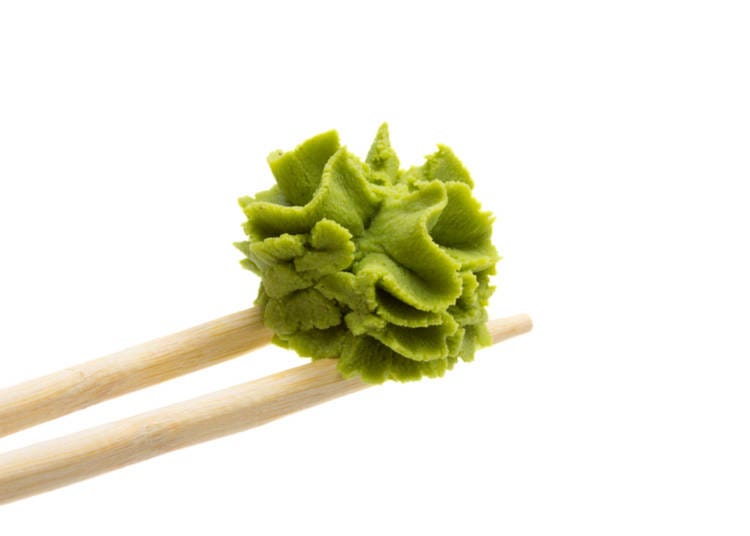 Wasabi has a long history of being used to prevent food poisoning, and just like Jason Bourne, wasabi has been shown capable of wiping out many bad things. Its antibacterial properties have been shown to be highly effective against E. coli and other bacteria, which cause food poisoning. Regular consumption of wasabi is perfect for your body’s defenses, and lately, a few pharmaceutical companies have even started using this ingredient in antibacterial creams.

12. The wasabi plant isn’t just about the stem 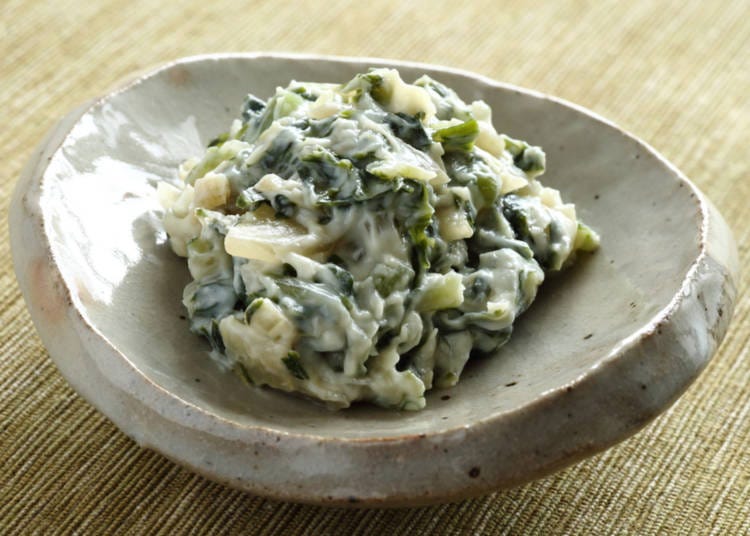 Pickled wasabi - wasabi zuke - is a traditional food in Shizuoka, made by chopping up and salting wasabi roots and stems before pickling the mix in sake lees and seasoning with salt and sugar

Talking about real wasabi might leave you thinking that the only useful part of the plant is the stem, but if you have a plant, then you should use all of it, including the leaves. These can be eaten pickled (in a dish called "wasabi zuke") or cooked and added to any meal for a little kick, or they can be eaten raw. When you visit Japan, definitely give it a go!

13. Eat a wasabi plant for its nutrition!? 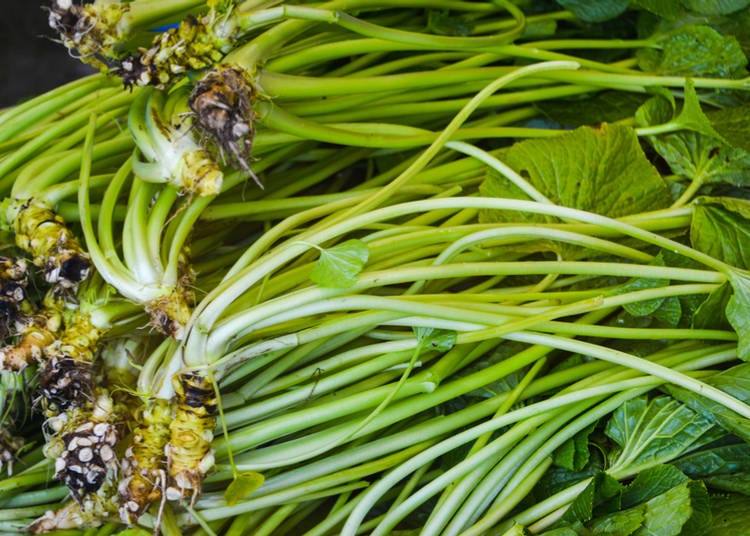 By itself, wasabi is a bit pricey, so it isn’t convenient to be eating large amounts every day, but even a little bit will give your body some tremendous nutritional boosts. Besides its antibacterial properties and isothiocyanates, it also anti-inflammatory and antimicrobial properties. The leaves and stems have a lot of calcium and vitamin C too. Besides, in addition to being really good against food poisoning, it is also thought to be useful against allergies, inflammation, and cancer.

Read more about the fascinating world of Wasabi!

Fresh Wasabi: Visiting a Traditional Wasabi Farm in Tokyo
The wonderful world of Shizuoka wasabi
*This information is from the time of this article's publication.
*Prices and options mentioned are subject to change.
*Unless stated otherwise, all prices include tax.