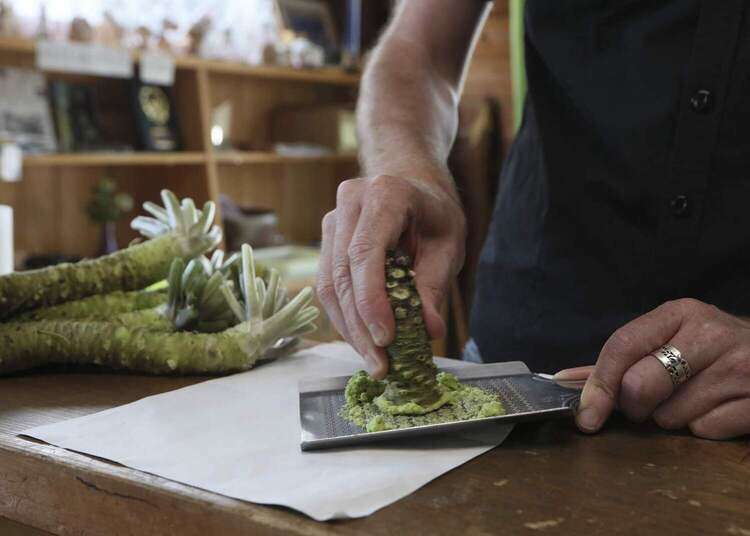 The wonderful world of Shizuoka wasabi

The mountainous terrain in and around Izu in Shizuoka Prefecture means there is plenty of clean, flowing water - ideal for cultivating wasabi (Wasabia japonica or Eutrema japonicum). Indeed, the Izu area has long been lauded for its high-quality wasabi, which is shipped throughout Japan and overseas. 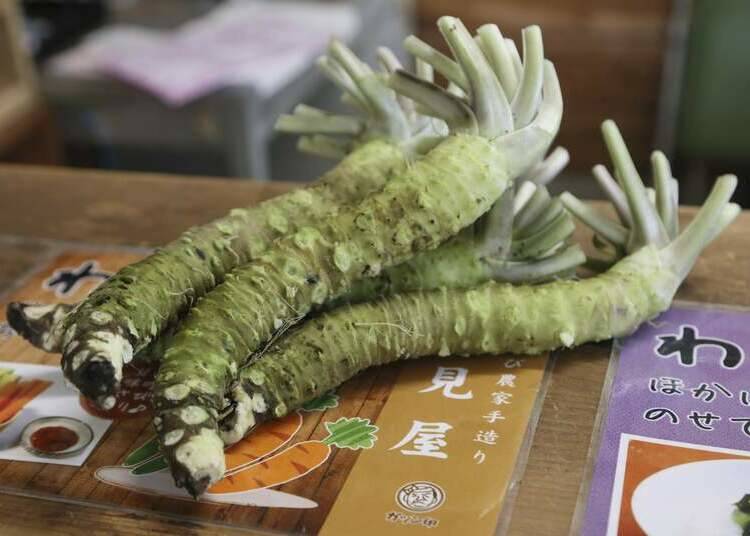 Wasabi can be used to flavor a variety of dishes

Wasabi is a traditional Japanese condiment that belongs to the same family (Brassicaceae) as mustard and horseradish. The crushed paste of the rhizome (underground stem) is used to flavor such foods as sashimi, sushi, and soba. Wasabi is rich in vitamins B1, B2, and C, and is also a good source of calcium and dietary fiber. 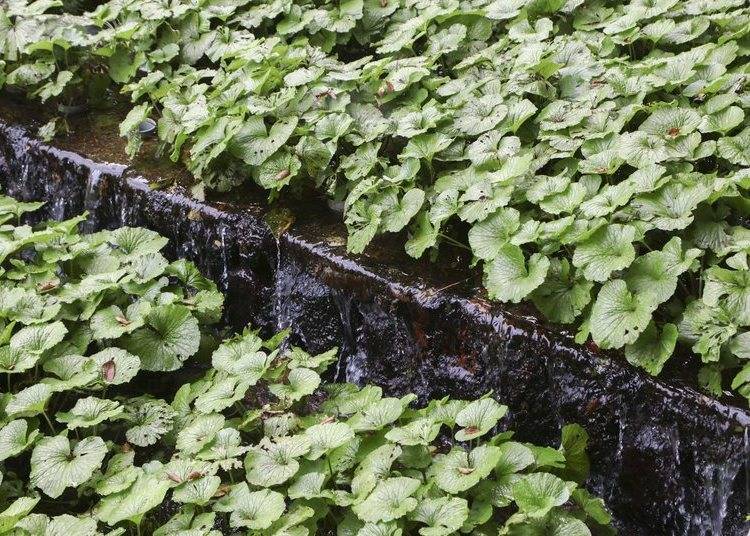 While in the Izu region, be sure to visit the terraced wasabi paddies in Ikadaba for a unique perspective on this native Japanese plant. You won't see a set-up on this scale anywhere else in the world. Indeed, even within Japan, there are only a few locations where the conditions are right to cultivate the plant, including specific parts of the Izu Peninsula.

As the paddies are in a remote spot, you'll need private transport to get there, unless you visit as part of a tour. The journey is a pleasant one though, with beautiful scenery all around. 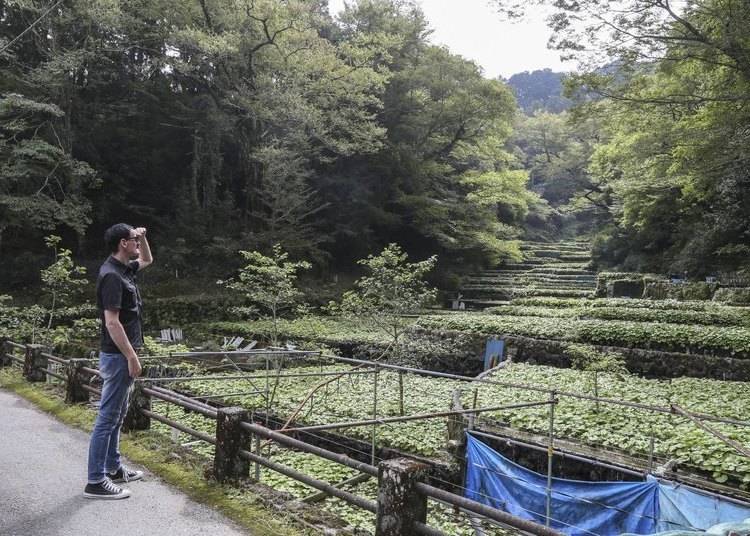 Looking out over the extensive wasabi paddies at Ikadaba

Upon arriving at the Ikadaba wasabi fields, wander into the middle of the bridge next to the small parking area to fully grasp the scope of the year-round operation. Terraced paddies built into the path of the Omi River channel the water over the wasabi plants.

Some paddies are covered by protective covers to thwart a buildup of leaves and debris; the covers also provide a degree of protection from the sun. The green plants (and variously tinted nets and tarpaulins) create a rich swathe of color as far as the eye can see, both upstream and downstream. 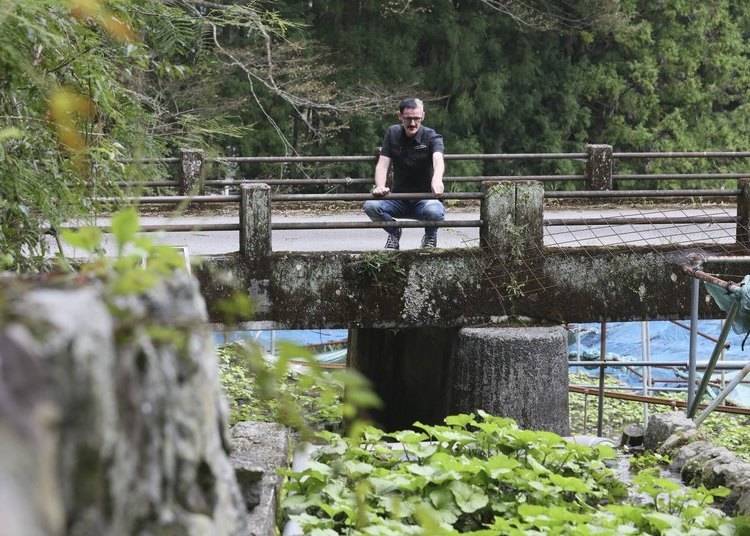 Noting a point of interest amid the wasabi paddies

The Ikadaba wasabi fields cover a staggering 14.7 hectares and comprise around 1,500 individual paddies. The river water is carefully channeled into and out of different terraces, so the water flowing from one does not enter another. In the paddies, sand is layered on top of gravel, ensuring water reaches all parts of the plant while also maintaining a constant temperature.

Visitors are forbidden to enter the paddies, not only because it would damage the plants, but because the steep terraced drops are potentially dangerous if you lose your footing. Sticking to the bridge is the most effective - and safest - way to view the wasabi-fields.

Make your own wasabi-zuke at Wasabi no Omiya 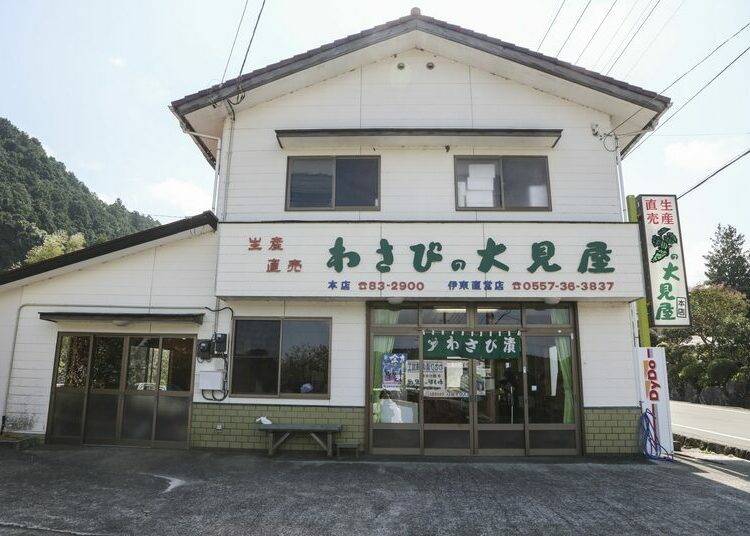 For further insight into the life and uses of this plant, visit Wasabi no Omiya in the small town of Jizodo, Izu. The firm cultivates award-winning wasabi, sells various wasabi-themed goods, and even teaches visitors how to create wasabi-based eatables. The company is operated by husband-and-wife team Joji and Kimiko Asada. Kimiko offers a wasabi-zuke-making experience, in which visitors create a tart-tasting wasabi-pickle paste.

The short walk from the shop/car park area to the classroom takes you over a bright green bridge. "The choice of color for the bridge was no accident," says Kimiko with a smile, alluding to the verdant green sheen of ground wasabi. 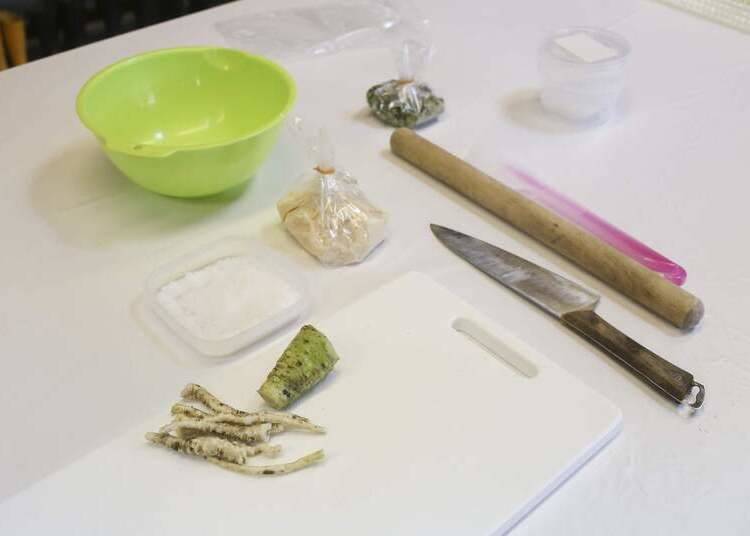 The ingredients and implements needed to create wasabi-zuke

Interestingly, all parts of the wasabi plant are used to create wasabi-zuke: the stalks, the roots, and the rhizome. The other ingredients are sake lees (the leftovers from sake production), and a little salt. 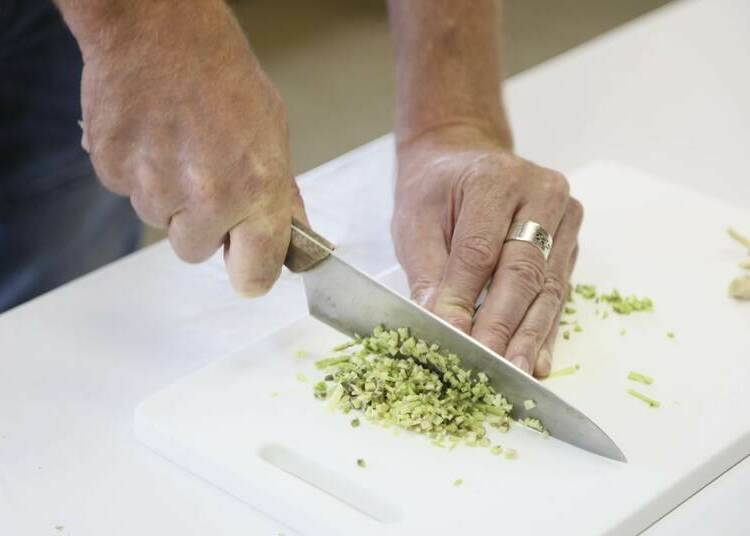 If you decide to take the class, steel yourself for a marathon chopping session. While a machine could potentially cut the ingredients to the same size, a hands-on approach is favored. The first step is to chop the stems into small pieces, add a little salt, and set to one side.

Then cut the roots and rhizome as small as you possibly can (mincing it if possible). If, after several minutes of chopping, your hand feels like it may fall off, you're doing it right. 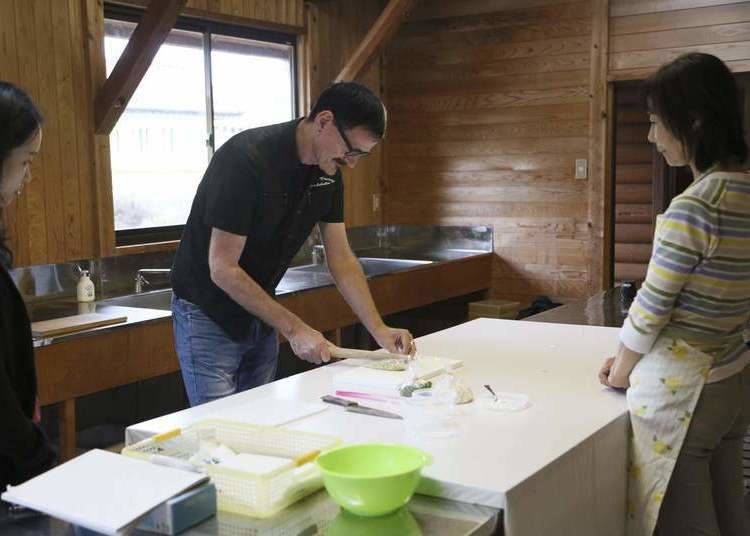 The next step is to release the flavor from the finely cut pieces by placing them in a polythene bag and bashing it with a rolling pin. Finesse isn't required for this stage, but don't go over the top. "If you hit too hard, the bag will tear, and we'll have to start again," says Kimiko. 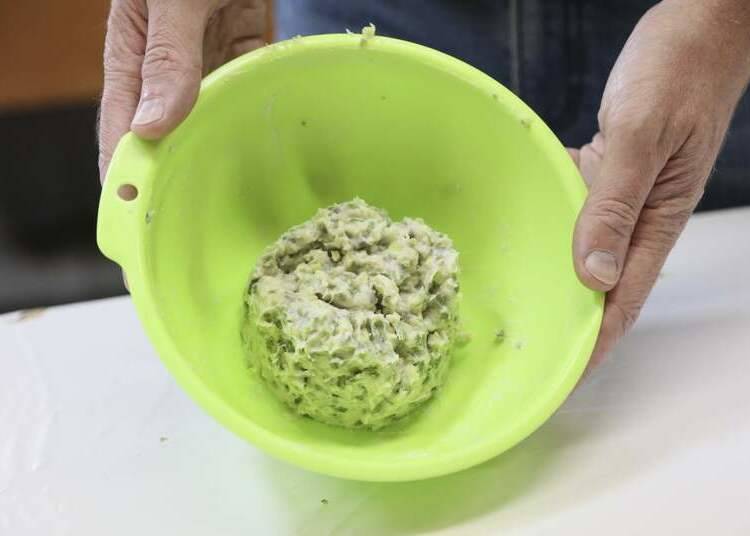 The final step is to combine all the ingredients in a bowl - including the paste-like sake lees - and mix to a smooth consistency. At this stage, a little sugar, salt, or mirin can be added to tweak the flavor before spooning it into plastic tubs to take home. 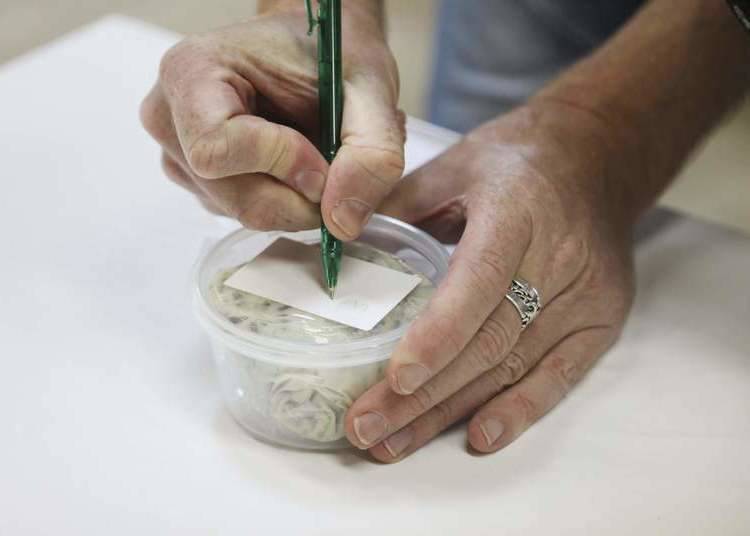 Try eating your wasabi-zuke with freshly cooked rice, or spread it on a slice of bread: it even goes well with meat or fish. You can enjoy it any way you like. Though Kimiko doesn't run wasabi-zuke classes in English, written instructions are available. 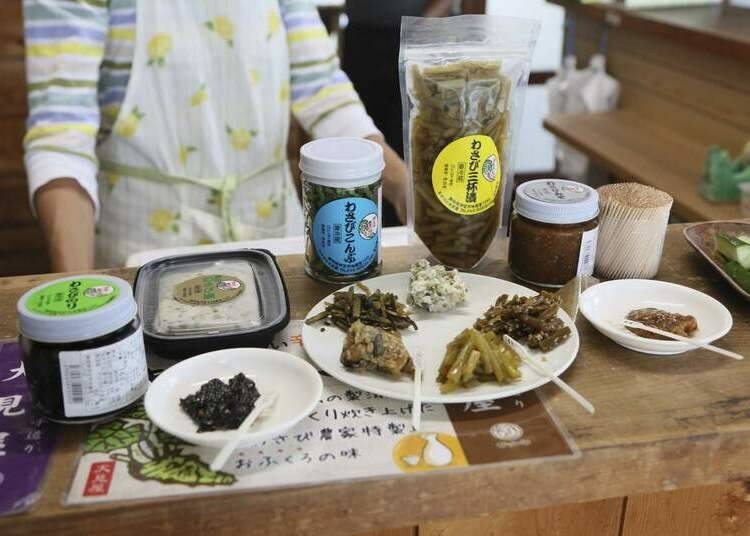 A selection of foods at Wasabi no Omiya

Wasabi no Omiya is a multi-award-winning company, evidenced by the large number of certificates and accolades that cover the walls. Fittingly, the shop sells a variety of foods, including wasabi miso, wasabi seaweed, and wasabi salt. 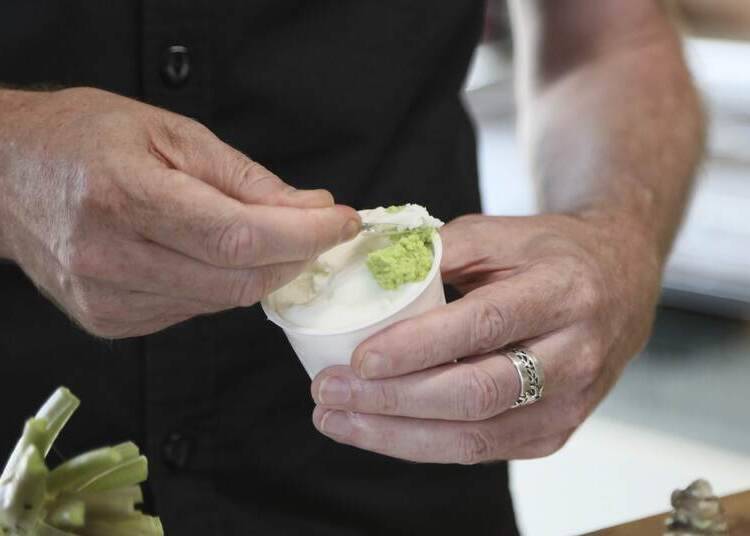 The most unlikely sounding product is the shop's specialty wasabi ice cream, which, as you'd imagine, is served with a large dollop of freshly ground wasabi. Surprisingly, the sweetness of the ice cream and the spicy pungency of the wasabi combine to create a surprisingly mellow and smooth - if somewhat unusual - taste. 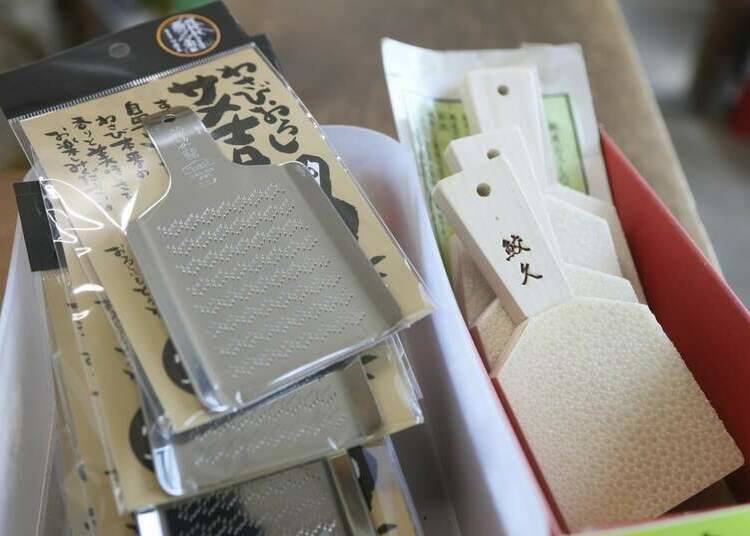 The shop also offers a wide selection of wasabi-related souvenirs and gifts, such as wasabi graters and different kinds of condiments.

Go with the flow at Banjo Falls 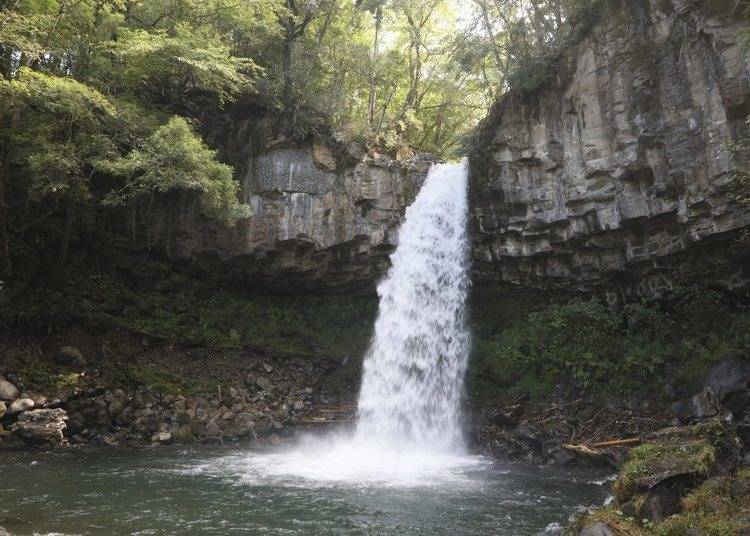 If you have time after your wasabi-zuke experience, make the short drive up the road to Banjo Falls (also known as the Great Falls of Izu). You'll hear the water well before you see it, and the noise grows ever-louder as you approach the source via a steep pathway that threads its way through a long-established forest, decorated by large, moss-covered rocks.

Once you reach the bottom, the view is magnificent. The 6-meter-wide waterfall plummets some 20 meters into a tree-lined, semi-circular canyon, in which overhanging rock - seemingly eroded from the bottom up over millennia - seems to defy gravity itself.