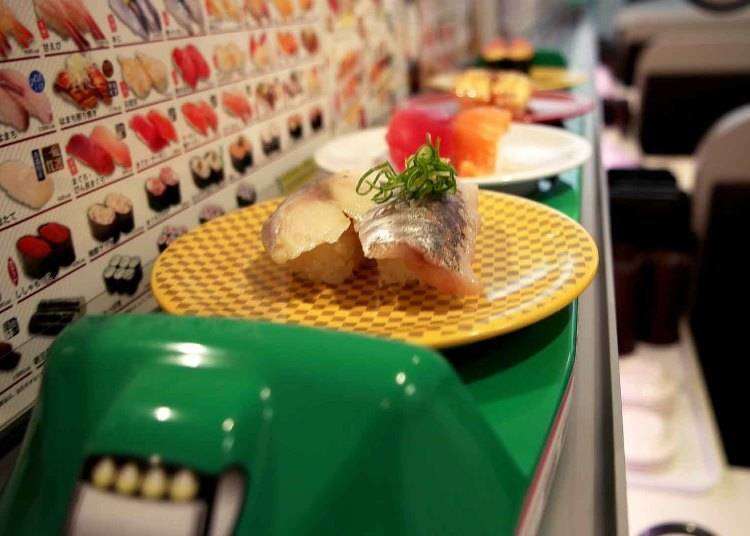 Conveyor belt sushi, also known as kaitensushi, is a staple in Japan and known the world over as one of its defining images. To break away from this standard image, but keeping true to its roots, a company has created a new kind of conveyor belt sushi. Instead of sitting in an endless loop of shellfish and sticky rice, Uobei delivers your sushi at top speeds directly to your table by miniature bullet train. 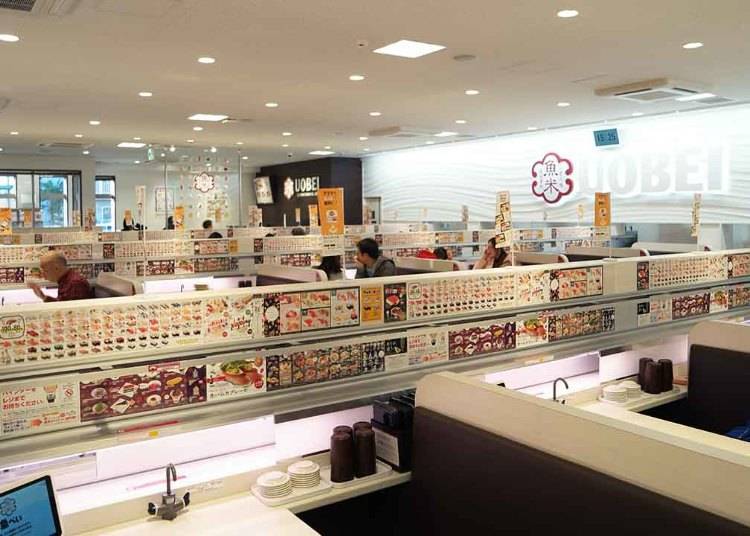 We visited the 100th Uobei store that uses touch screen tablets, which customers use to order their food. This innovation allows customers to order multiple items throughout the course of their visit, without having to flag down a waiter or waitress every time. Uobei is a subsidiary company of the Genki Sushi franchise. Both sushi restaurants have tablet ordering systems and instant sushi delivery, the major difference between them being the means of delivery. Uobei has stylized their delivery trays to look like different kinds of trains and cars that you can find around Japan. Do you want your order delivered to your table by way of tiny bullet train or race car? They can do that! 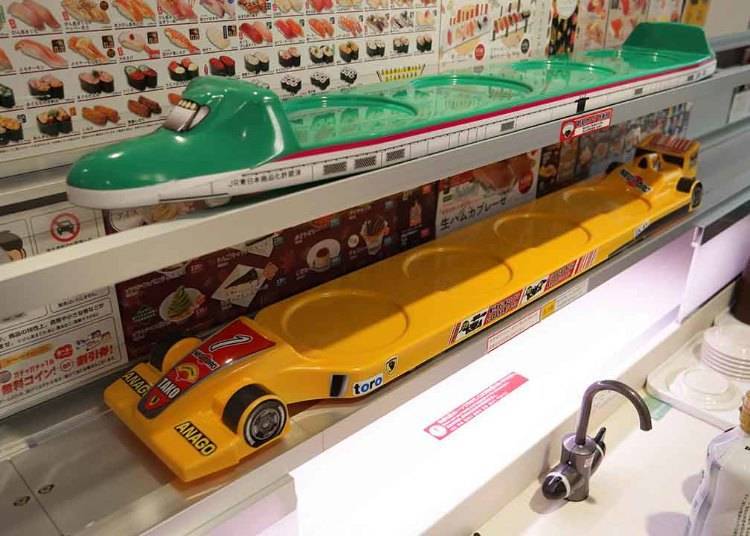 There are many locations around Tokyo including right in the heart of Shibuya (Please note that locations in Central Tokyo, such as Shibuya, Oyama, Omori, etc., do not have train or car delivery trays. The closest location with such trays and the one we visited is Uobei Sushi Mizuho). This location appeals to the late night vibe of Shibuya by being open until midnight everyday. If you want to visit an authentic Uobei in Tokyo, you can check out any of the Shibuya, itabashi, or Oomori locations. They are usually open for lunch time and late into the night. 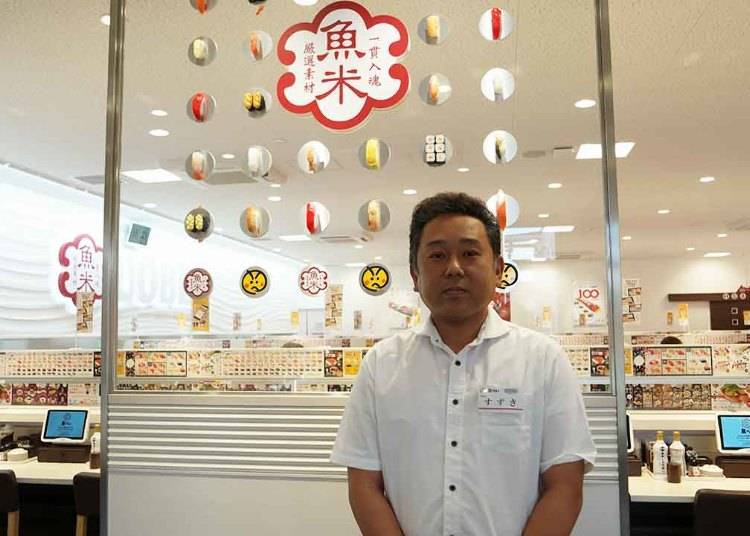 At the location we visited, we spoke with the manager, Mr. Suzuki, who told us that the goal of Uobei’s innovations, the touch-screen tablet and train delivery trays, was to make customers as comfortable as possible. The tablets allow for easy ordering, with no need to wait for a staff member to help you. They also ensure that your order is as fresh as possible.
At most conveyor belt sushi restaurants, sushi plates are kept on a rotating path in front of customers. This allows customers to grab plates freely, choosing the sushi they like without having to talk to a waiter. The problem with this is, you don’t know how long those plates of sushi have been sitting on that endless loop. Was is 1 minute, or 2 hours? As a customer, you don’t know. So for that reason, Uobei prides itself in its freshness of sushi. 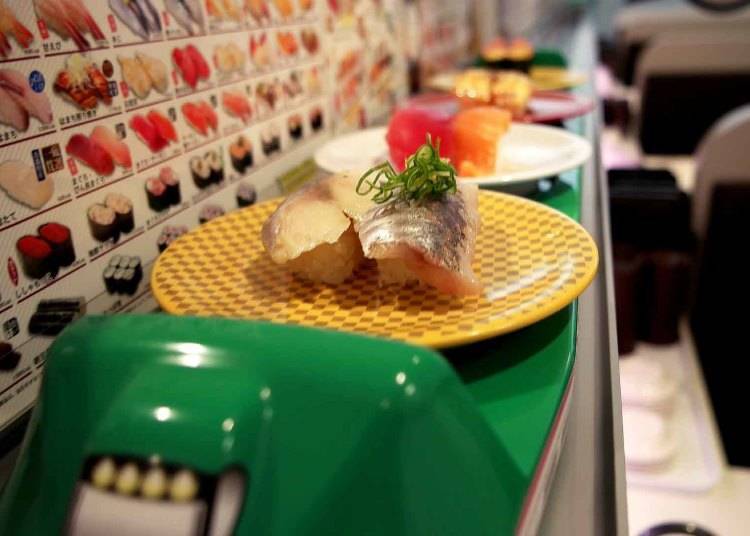 Every plate of sushi is made to order and delivered to your table within 1 minute. The epitome of freshness! This also reduces the amount of product waste that Uobei creates since there is no guesswork involved in what customers might want or not.

Battleship Sushi and Their Fleet 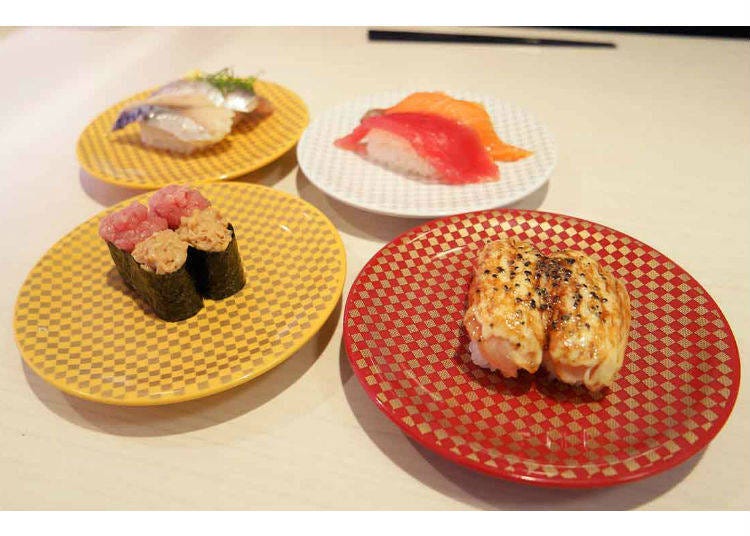 When entering Uobei you are greeted directly by a wallpapering of your menu, and boy is it expansive.
This store has everything you could want out of a sushi experience, and more! Do you want to try the traditional fatty tuna? No problem! The number 1 sellers at the location we visited were fresh salmon sushi and fish eggs on top of rice, also known as ikura gunkan.
Not looking for something so classic? How about something a bit crazier? At the moment they have a limited time offer of Caprese flavored sushi. Topped with basil and tomato. Is sushi really not your thing and you were dragged here by a friend? Also not an issue, give one of their side menu items a try. French fries, fried chicken, and even ramen are available to order if you are not in the sushi mood. 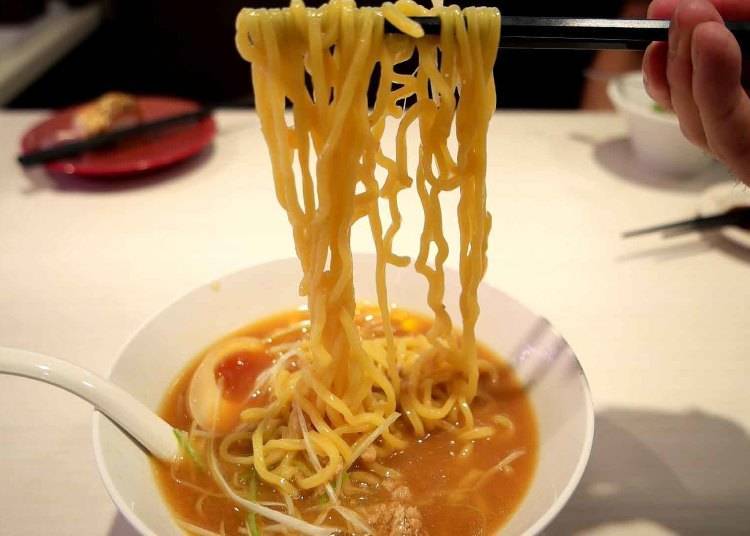 The menu is full of the standard nigiristyle sushi, which is raw fish on top of rice, and gunkan style sushi, which is loose toppings on top of a “boat” of rice and seaweed. It literally translates to battleship sushi. Some of the most famous kinds of classic nigiri sushi are salmon, tuna, and mackerel. All of which you can easily find anywhere. What you can’t find everywhere are tempura shrimp and hamburger sushi.
Plus, the super rare limited-edition crazy sushi that Uobei offers for only a few weeks at a time. These include past promotions of raisin cream cheese sushi and gyoza dumpling topped sushi. 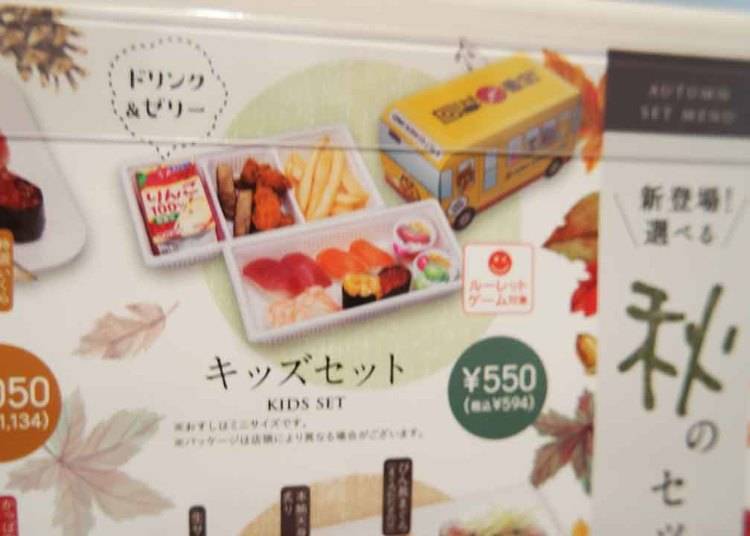 Uobei also offers a cute kids set. As you can imagine, the train and car delivery system is a huge draw for kids. Mr. Suzuki says that they are some of his store’s biggest fans. So Uobei offers a kids meal which includes their own paper vehicle.
Another unusual aspect of the Uobei menu is that wasabi is never put on the sushi. Usually at sushi restaurants, wasabi is put on sushi automatically, and customers must request the chef or waiter to exclude it from their order. But at Uobei, customers are free to add as much or as little wasabi as they like at their table. It can be added to either a dish of soy sauce or the sushi itself. 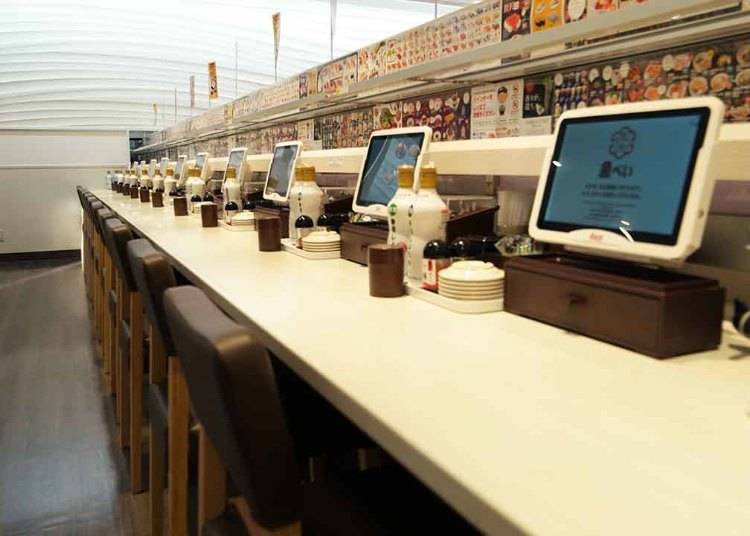 Now that we’ve talked about the food, how do you actually go about using the tablet to order? You might be daunted at first because, how are you supposed to order only using something written in Japanese? But don’t worry, Uobei has thought of that. The tablet is able to switch languages at the push of a button. Now you can order in Japanese, English, Korean and Chinese. This is style of ordering is becoming quite common in Japanese style restaurants and bars. 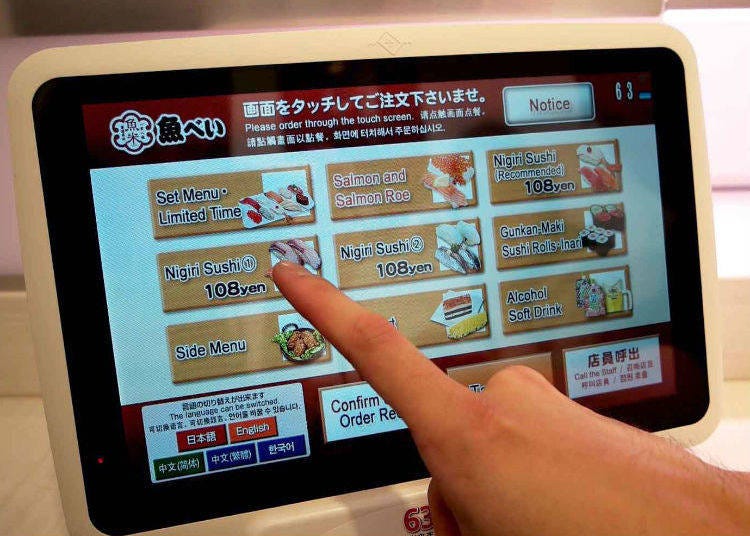 There are several categories on each tablet for the different kinds of products. This includes nigiri, gunkan, drinks, side menu, and more. If you want to find something specific, you will have to look through the correct category. You might be surprised about what is included in the side menu section, though. Soy sauce flavored ramen is the number one side menu item seller at this shop, even though it is kind of too big to be considered a side item. So go ahead and add four items at a time and send in your order. Your special delivery train will arrive with your food. 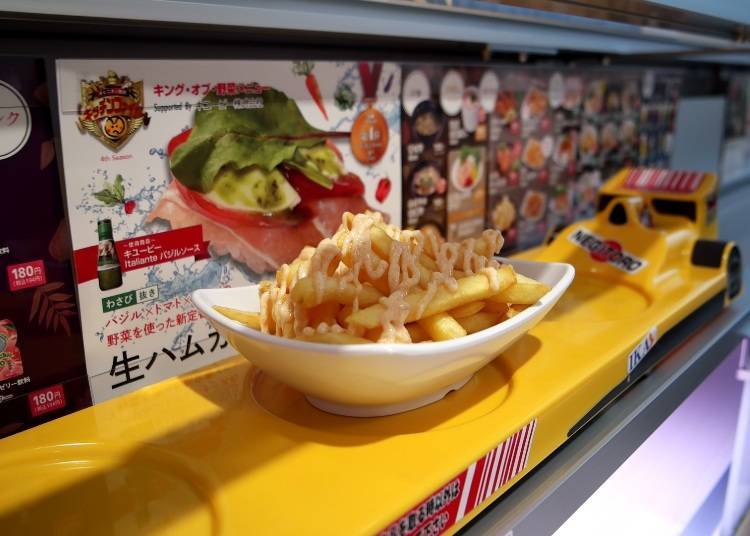 Take all the pictures you want, but remember to hit that “return to kitchen” button after you remove your food. Otherwise it will continue to beep at you until you do. When you are finished with your meal and are ready to leave, just press the button that says “Separate Cheque” and your bill will automatically be sent to the register for you to pay as you exit. As usual in Japan, there is no tipping required. 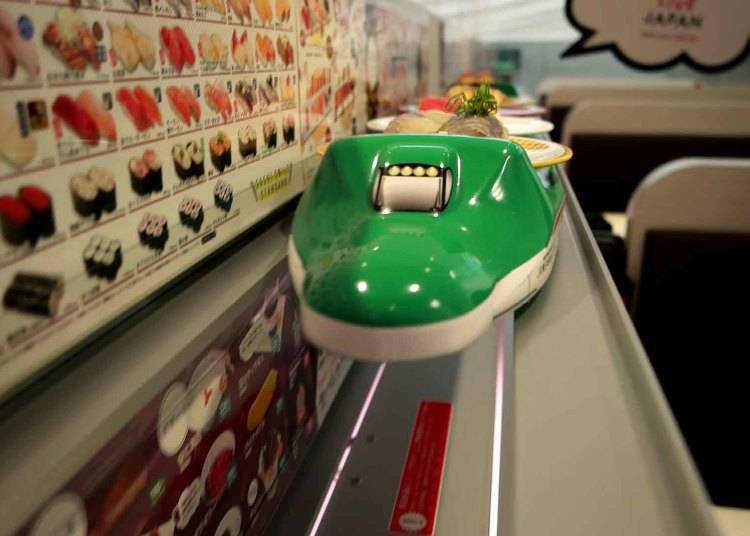 Of course the main draw for this kind of restaurant is the variety of trains cars. They vary from bullet train, to local express, and even race cars if you are not the biggest railway fan. These trains will be sure that your food arrives fresh, quickly, and in style.
Something you won’t see at other restaurants that use these kinds of delivery systems, is the special safety feature that has been added to the trays. The delivery trains will not leave their designated table until the food has been removed from the tray, even if the return button is pushed. This helps prevents accidents. 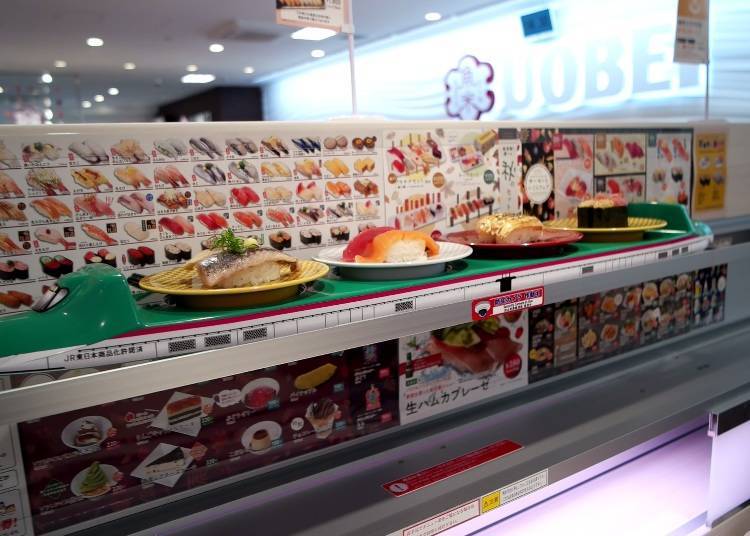 The overall atmosphere of Uobei was unquestionably friendly and clean. The tablets and delivery trains give it a high-tech vibe, which fits perfectly with visitors images of Japan. Despite such a low cost for each plate, only 100 yen or about $1 USD each, the sushi is incredibly fresh and delicious. You get your money’s worth and more. If you are looking to visit Tokyo, check out Uobei and get some high speed sushi! 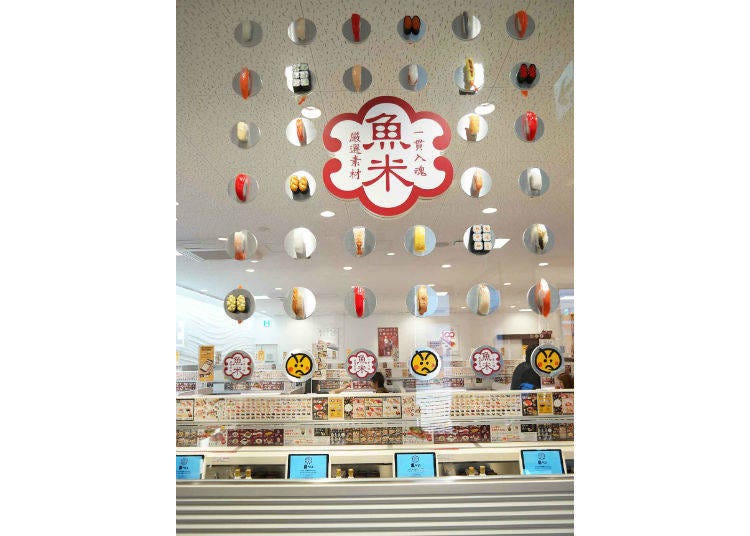 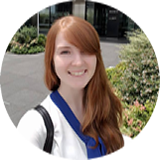 I was the co-founder for the anime convention Swampcon at the University of Florida. Currently living and working in Tokyo as a writer and video editor. I enjoy making videos about everyday life in Tokyo.