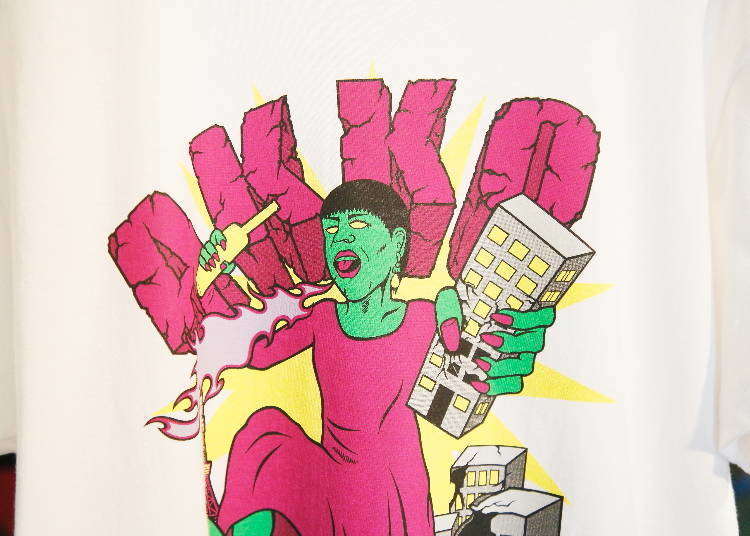 “Cool Japan” is a keyword that many Japanophiles are familiar with. It’s an umbrella term for modern pop culture such as manga, anime, fashion, music, and so on – every unique trend that comes out of Japan, basically! At the same time, Japan’s coolness hand in hand with a certain, well...weirdness. (Japanese commercials, anyone?)

In Tokyo’s Sendagaya, a trendy neighborhood just south of Shinjuku Station, we found a shop called Takanotsume (“Eagle’s Claw”) that manages to raise said weirdness to a whole new level! Their clothes and goods are objectively weird, ugly even, and yet they are, without a doubt, the most kickass thing we’ve ever seen! Nothing screams “TOKYO!” like the yelling face of an almost-naked dude, right?

Uncool is Cool – What’s That About? 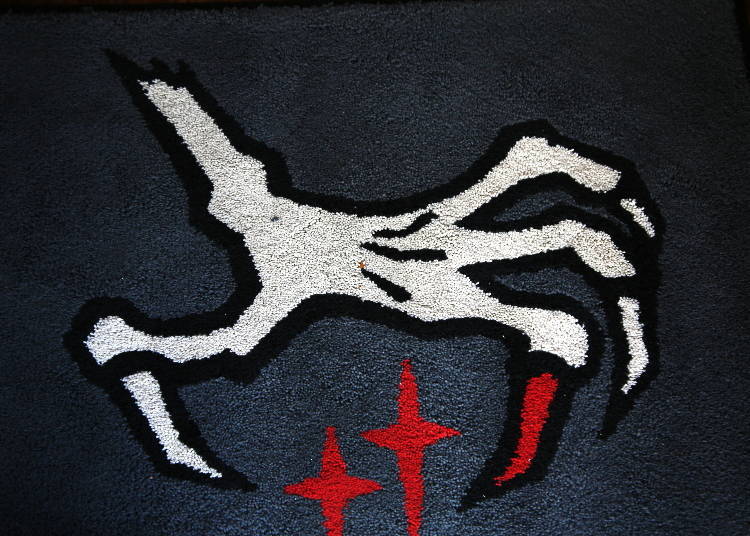 When we see something particularly absurd, weird, or ugly, we inevitably laugh about it. Takanotsume turned this sort of humor to its driving concept “uncool is cool,” designing and selling original clothes, accessories, and more. It looks back on a history of fifteen years in which it has set several trends with its hilarious weirdness. PUNKDRUNKERS and OJISUN are the two original brands that arose from Takanotsume’s creative designs; so unique and original, you’ll recognize them anywhere. True, “uncool is cool” sounds like a fine line to find between funny and unwearable, but Takanotsume pulls that off with surprisingly stylish designs. 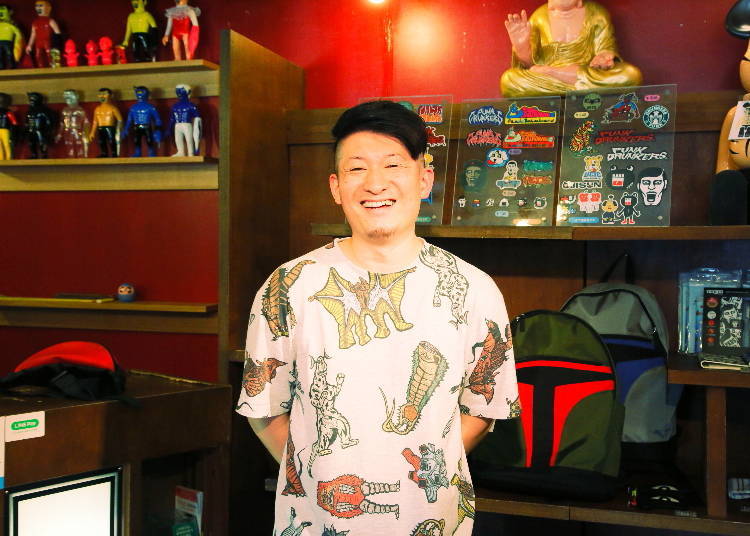 “Yes, ‘uncool is cool’ is our concept,” reaffirms Kōtarō Shon, the shop manager of Takanotsume. The brand itself exists since about 20 years and enjoys many loyal fans who’ve been around from the start, now in their 40s. Recently, however, a lot of young people have noticed the weirdly amazing brand and its following grew a lot more diverse. While men made up the vast majority of Takanotsume’s shoppers in the past, more and more women come to the shop in search for a unique piece. “Lately, we’ve also had a lot of customers from overseas, especially Asia.” 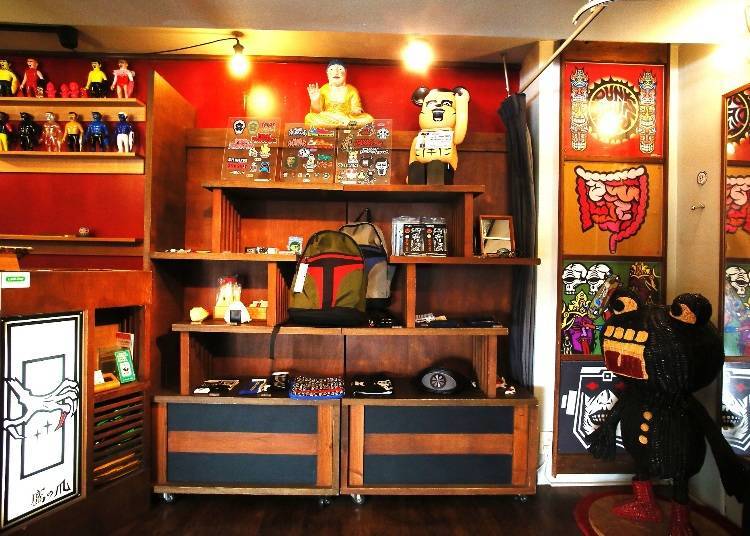 Takanotsume has started to show up at various events abroad, including Taiwan and New York, to showcase their brand with pop-up shops. The “uncool is cool” apparel was just recently sold in Korea, for example. 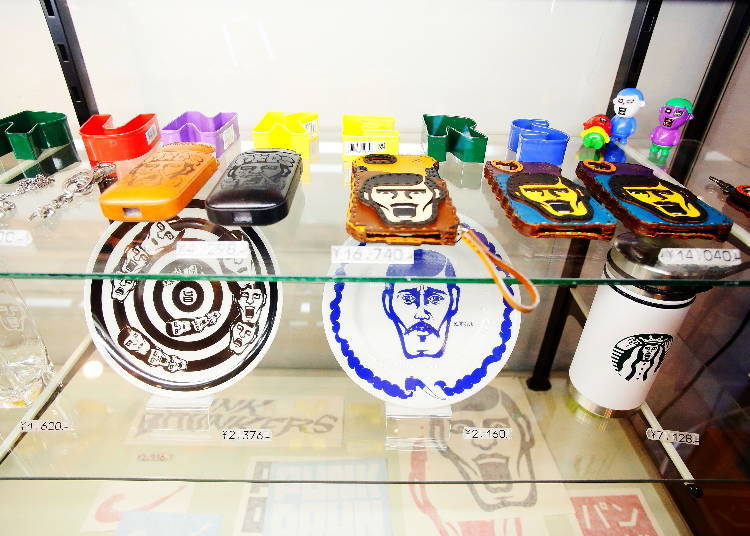 The “so ugly that it’s absolutely hilarious” designs sold outside of Japan are the same as what you can find at Takanotsume in Sendagaya – amazing weirdness straight from Japan. Every single one makes you smirk in its own way. Another aspect that makes these designs so trendy and popular is that once something’s sold out, that’s it. The stuff is rarely restocked, making pretty much every item you buy one of a kind.

Collaborations with Singers, Entertainers, and all Sorts of VIPs!

Takanotsume boasts a plethora of different collaborations with various businesses, people, and other interesting things. That brings forth a large selectin of limited goods created together with Bandai Namco, Kamen Rider, Star Wars, or the singer Akiko Wada, just to name a few examples. 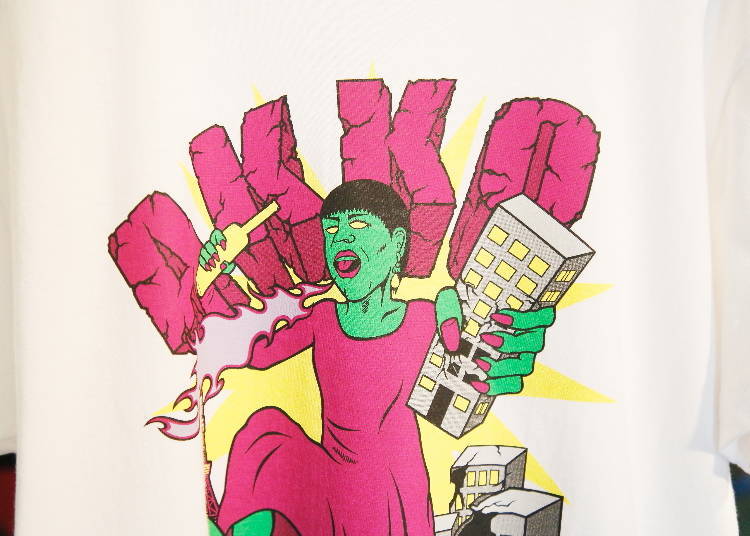 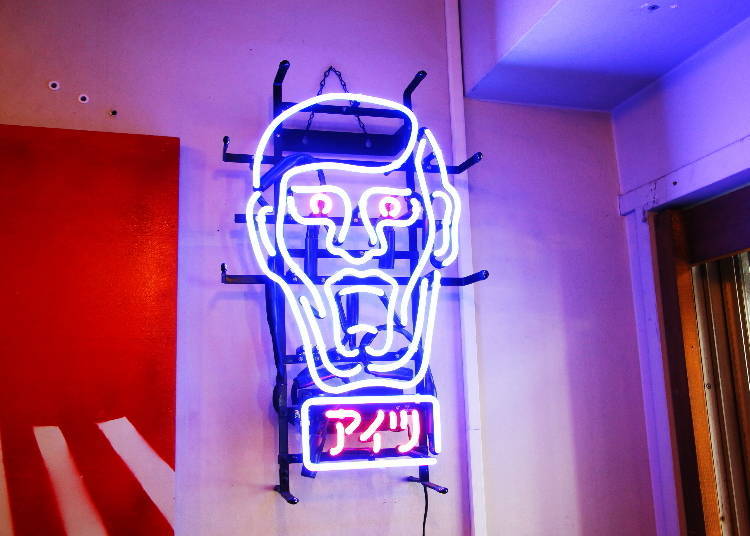 Remember when we talked about a yelling, half-naked man at the beginning of the article? Well, that dude is Aitsu (“that guy”). “He was originally designed as ‘Sunken Eyes Dude’ to appear in certain product designs...and somehow became the icon and mascot of the shop.” 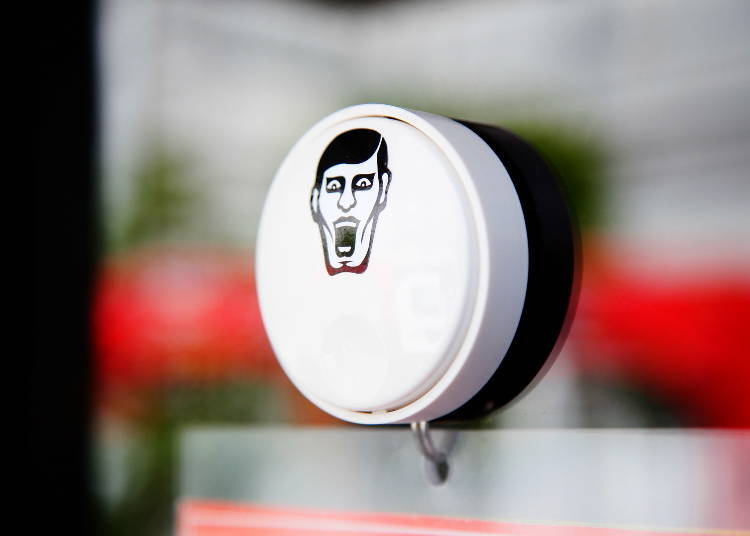 Looking at Aitsu, well...it’s impossible to NOT look at him, really, even if you try really hard. It’s pretty obvious why he became the shop’s prime representative.

Visiting Takanotsume for the First Time – What’s that Like? 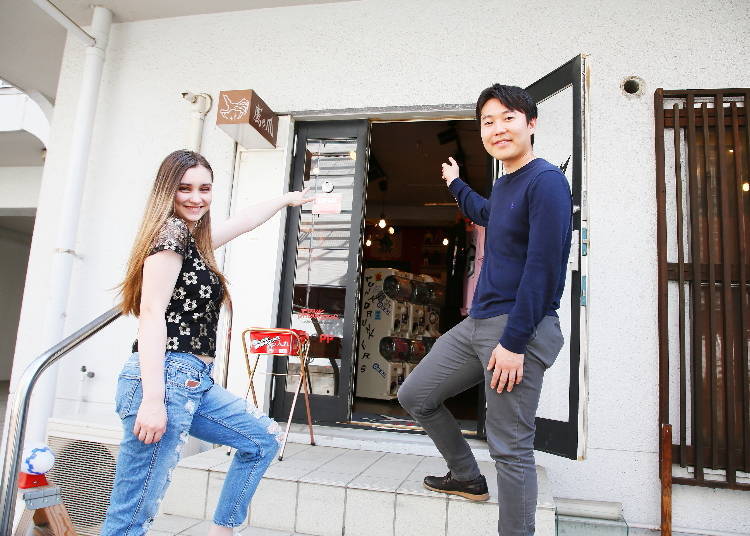 There’s one important question, however. In Japan, weird fashion is generally celebrated, but is Takanotsume’s stuff wearable outside the country as well? We took two newcomers to Japan to the shop to see what their reaction was. 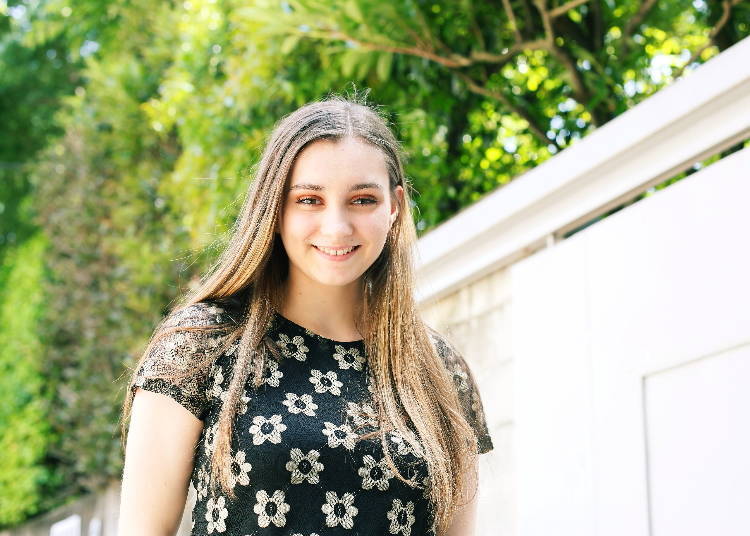 Meet Maddie from the States... 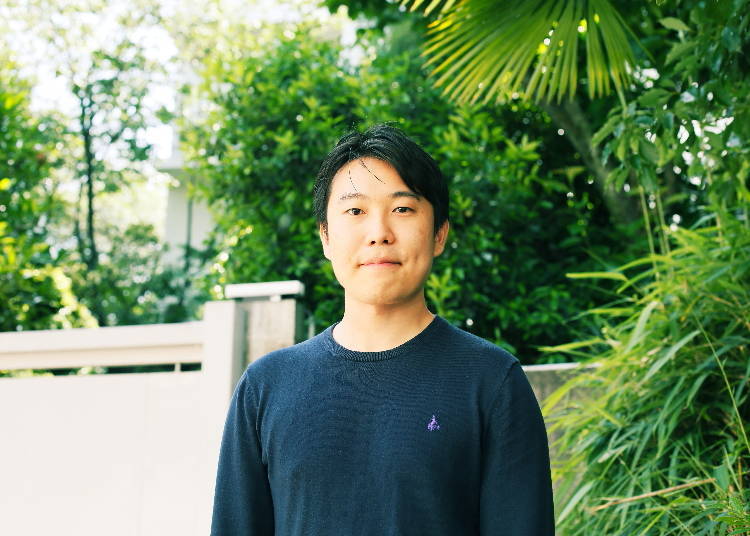 The two of them currently study Japanese at a language school in Tokyo. “We’ve never been to that shop, so we’re really excited to see what they got!”

Passing by Aitsu and Into the Shop! 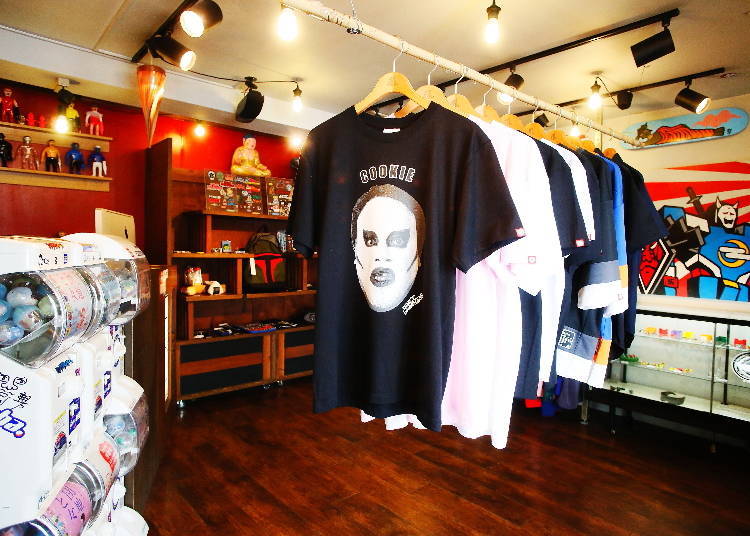 As soon as Maddie and Shin step inside, they immediately notice Takanotsume’s freaky T-shirt designs. The showstopper seems to be the super-popular shirt made in cooperation with the Japanese entertainer/comedian “Cookie.” He’s famous for transforming himself into various characters using white makeup. For Takanotsume, he turned into Aitsu, of course, and is now available as a rather intense T-shirt. Next to that is a shirt born from a collaboration to celebrate the 50th debut anniversary of singer Akiko Wada. 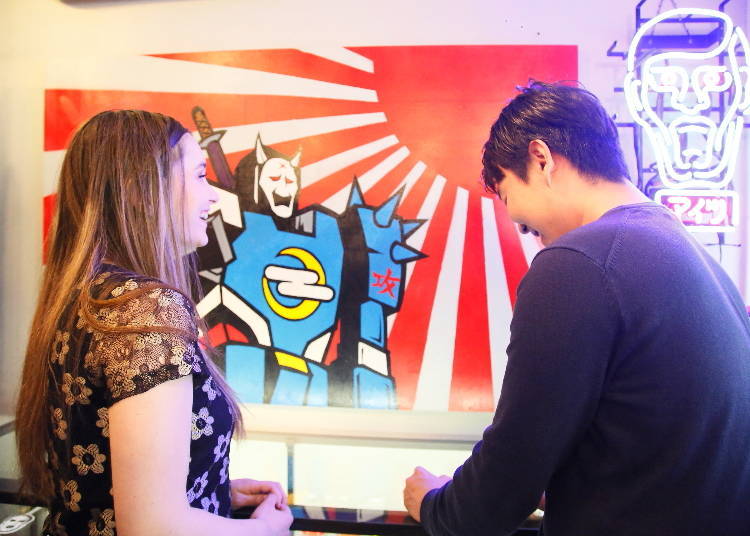 We asked Maddie and Shin about their favorites at Takanotsume and what they would recommend to a shopper who’s not from Japan. In short: what are the three coolest things?

Their selection doesn’t only make for excellent souvenirs, but it is also a quirky portrayal of everything that makes Japan and its trends so fun and unique. So, what to buy? 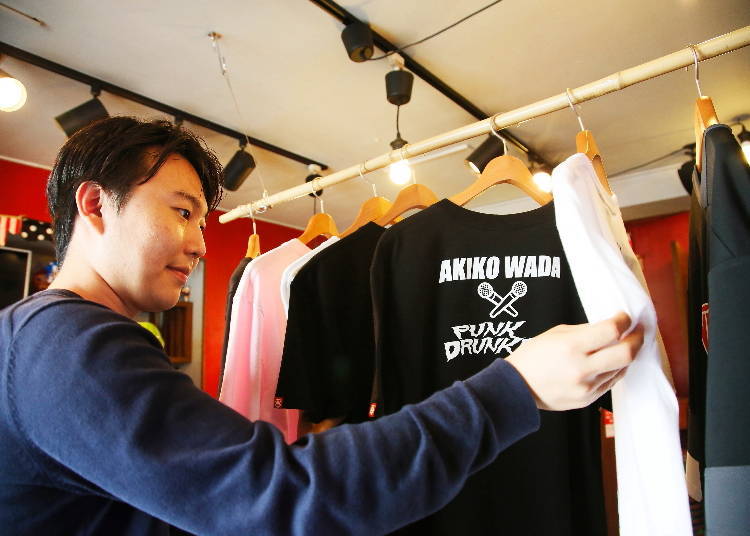 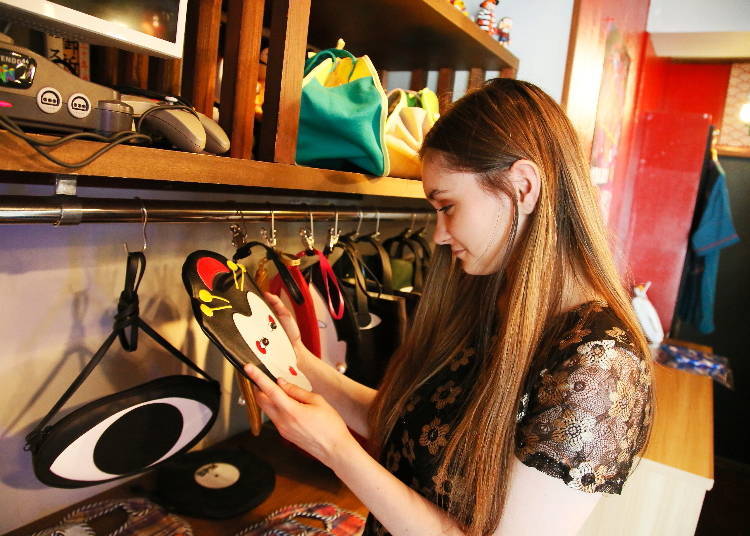 We didn’t tell either of them about Takanotsume’s concept or Aitsu, the weird mascot of the place. That way, they chose simply by their own preferences and ideas. Both Maddie and Shin visibly enjoyed browsing the selection of goodies, but which ones did they like the most? 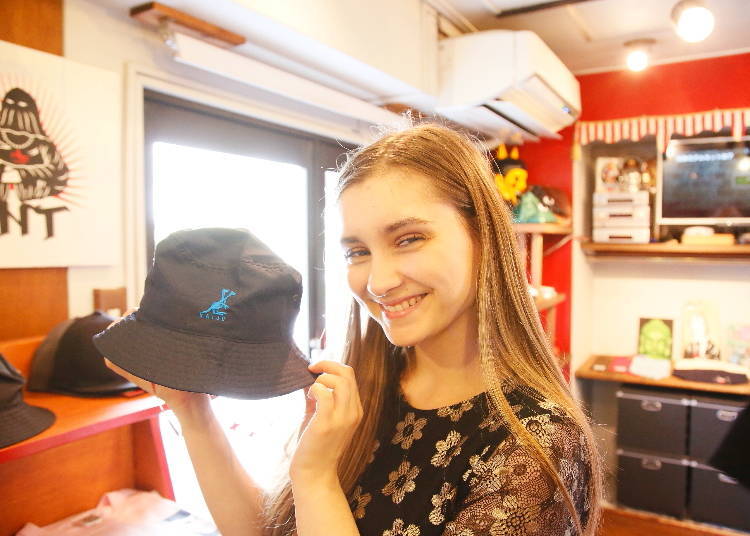 Maddie’s third-favorite must-buy is the “KAIJU HAT” for 4,212 yen (tax included). “This type of hat is popular in the States. And this one is especially cute.” Among the many loud and crazy designs, she chose a subtler accessory that perfectly accentuates pretty much every outfit. Nonetheless, Japan is prominently represented by the kaijū (that’s what giant monsters like Godzilla or Mothra are called) embroidery. Nice choice! 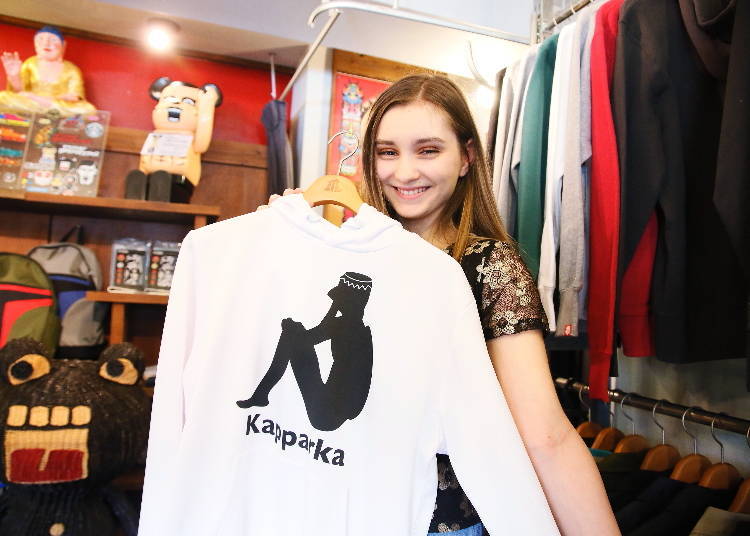 Everyone knows the Italian sportswear brand “Kappa” and its logo of a man and a woman leaning against each other. In Japanese, the word kappa refers to a mythical creature that looks like a weird mix between human and turtle, with a puddle of water on its head. Takanotsume, of course, took the sports brand logo and turned it into a Japanese kappa on a cool sweatshirt for 9,180 yen (tax included)!

“People in the States like Japan’s mythical creatures. Especially the Kappa!” says Maddie. “This cute sweatshirt suits anyone!” 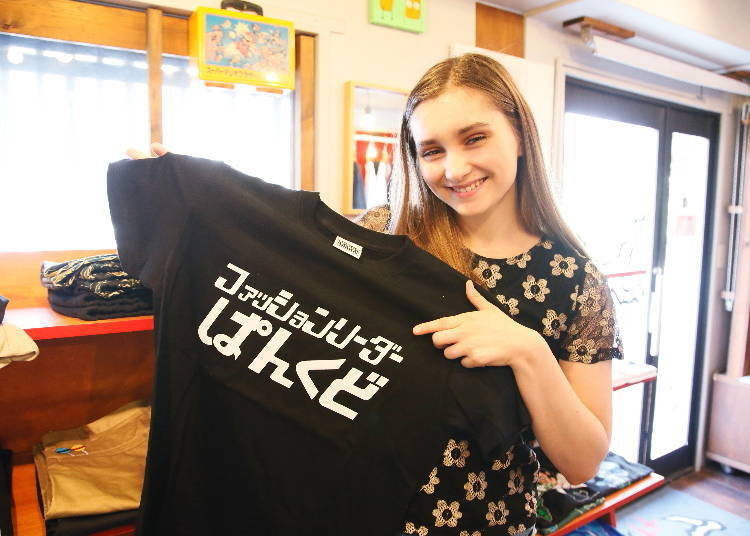 Maddie’s number one favorite item at Takanotsume is the “Fashion Leader Shirt” for 4,536 yen (tax included). For Japanese people, the font on the shirt is recognizable, but for everyone who doesn’t speak Japanese, it simply looks kickass. “Japanese characters are super popular in the States, even if people can’t read them. You’ll see many kanji tattoos, for example. So this shirt looks really cool!” 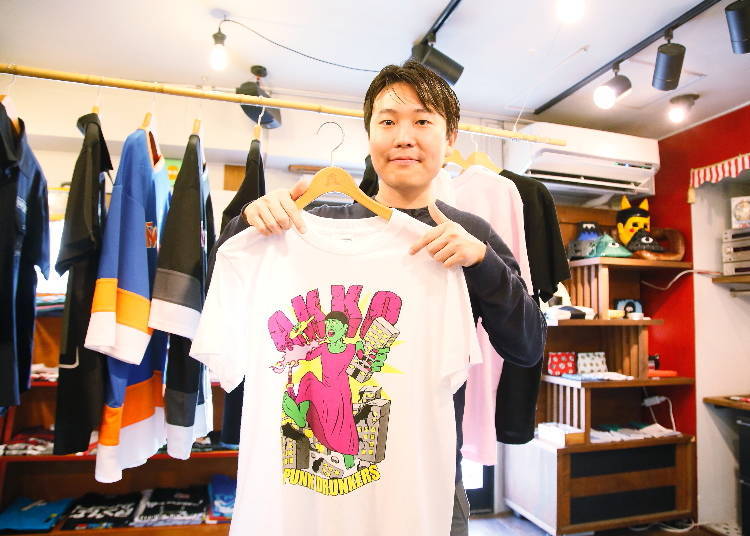 Shin’s third-favorite pick is the PDS x Wada Akiko “Akko” T-shirt for 5,184 yen (tax included). “It’s such a funny design, not something you’d easily find in Korea,” he explains his choice. As already mentioned, this shirt is part of a collaboration between Takanotsume and the famous signer, commemorating the 50th anniversary of her debut. The funny thing is that Shin didn’t even know her but simply enjoyed the monster-tastic design. 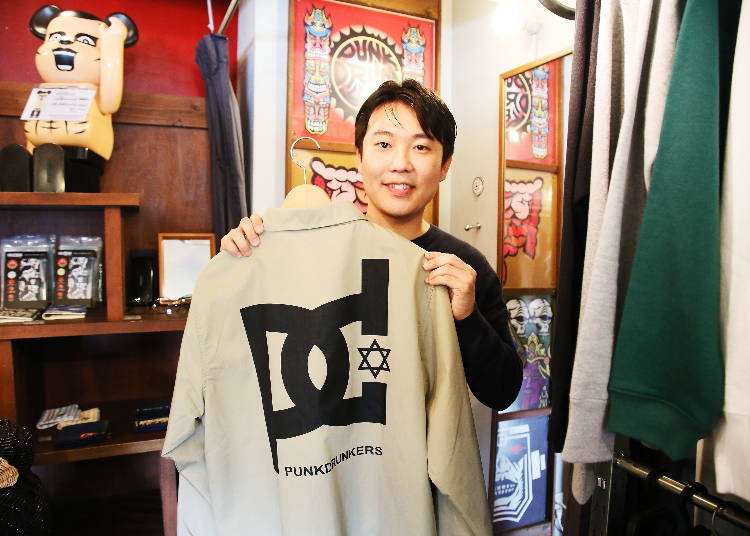 Number two on Shin’s top 3 list is the “pd coach jacket” for 10,800 yen (tax included). “It’s simple, that’s why it’s cool. That would be a massively popular item in Korea, I think.” As you can see, this jacket plays with the famous logo of a certain other sports brand, much like the Kappa sweatshirt favored by Maddie. The design itself might be simple, but this little quirk is sure to draw people’s eyes nonetheless. “PD” stands for one of the shop’s brands called PUNKDRUNKERS. 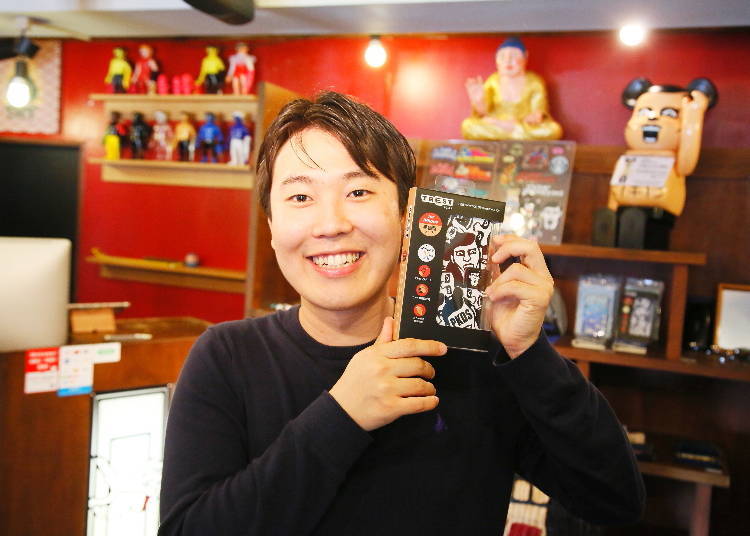 Shin’s top pick is an especially fun one: the “So Much Aitsu” iPhone case, adorned with the yelling mascot to the fullest! “We use our phones every day, so a case is important. The design of this one is super fun and I like that there’s a mirror inside. That’s rather unusual but mega convenient!” 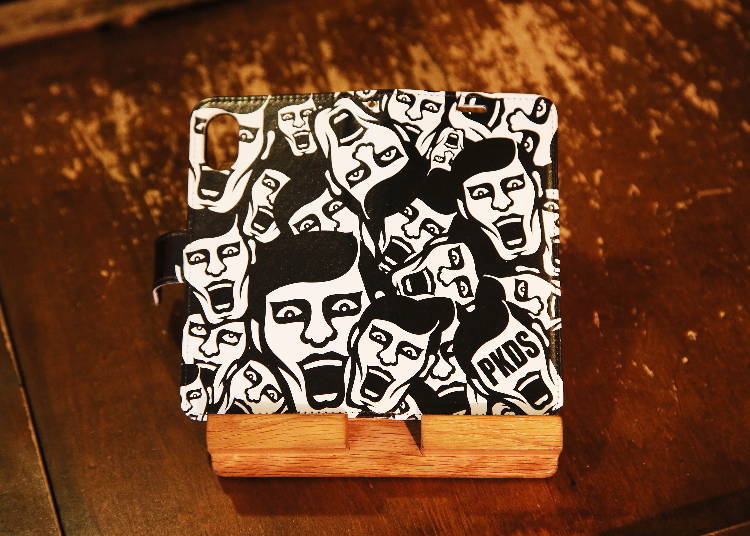 You can’t see it from the outside, but this book-type phone case features a mirror just below the card holder. With Takanotsume’s famous Aitsu all over the front, it comes as no surprise that this case doesn’t only look kickass but also boasts extra features! 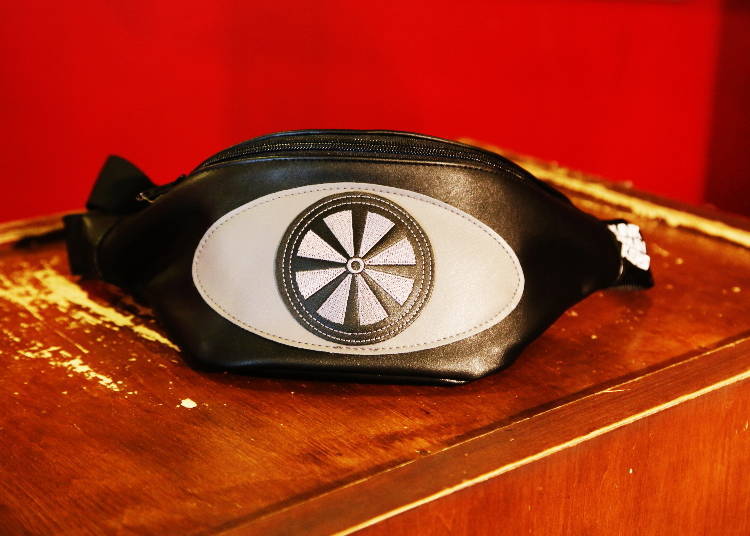 Of course, we also asked the manager what he recommends! He especially likes the PDS x Kamen Rider waist pouch for 6,264 yen (tax included). As the name suggests, it is part of the shop’s collaboration with Kamen Rider and while a lot of people might first think of toys when they hear the name of that show, this pouch looks absolutely kickass. On top of that, it has plenty of space and is quite comfortable. It comes in red and black! 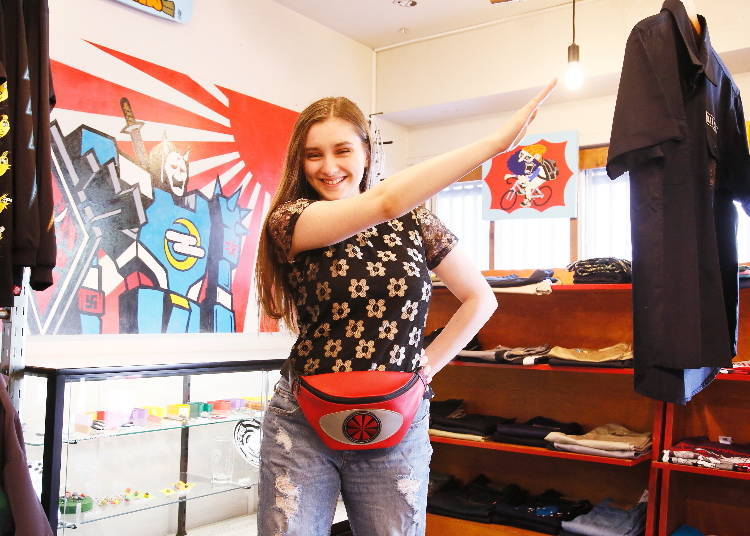 As Maddie tried the waist pouch on to see how it feels and sits, we couldn’t help but ask her to do the iconic Kamen Rider Pose – and she totally nailed it! Go, Maddie!

This pouch is rather popular, but the collaboration is still on, so if you want your own one, make haste to Takanotsume!

Find Your Own “Uncool is Cool” Favorite at Takanotsume! 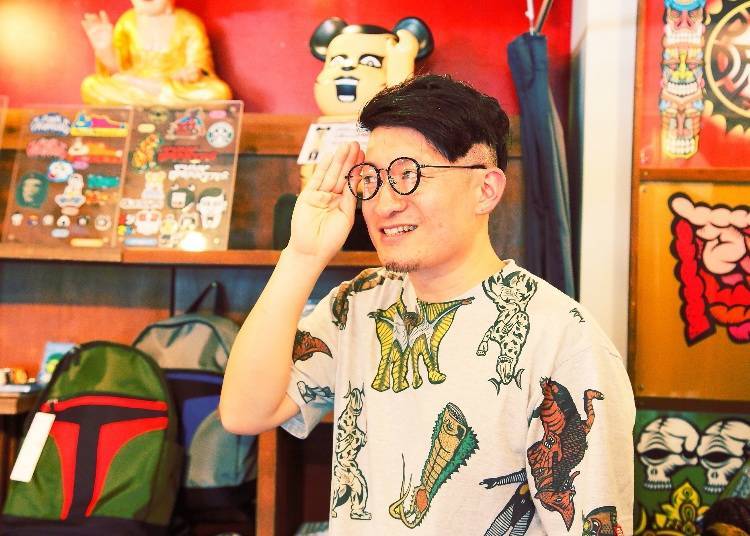 “I hope that plenty of people from all over the world will come visit me at the store. Actually, some of our fans tell me that they don’t want Takanotsume to become too famous, so I have complicated feelings about this... (laughs)”

In the end, he’s keen to welcome each and every one to browse the quirky and wonderfully unique selection of goodies. Say hi to Aitsu and let yourself be engulfed by the ugly-cool atmosphere of Takanotsume – it almost feels like the secret base of a villain... 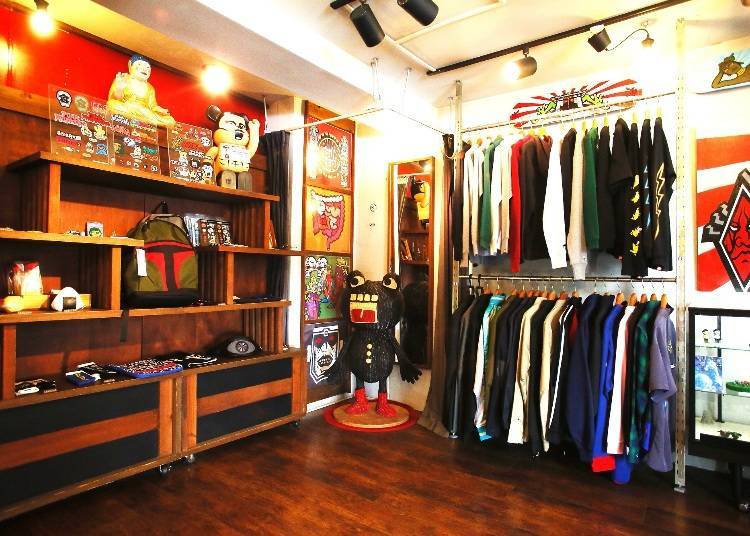 We only showed you a small selection of the “ugly is cool” stuff of Takanotsume – there’s plenty more to discover! Whether you’re looking for something simple but unique, sure to draw people’s attention with funny little details, or want to wear a loud and crazy piece that just screams JAPAN, this shop is a real treasure trove! Take home a one-of-a-kind piece and bring your own flavor to “uncool is cool!” 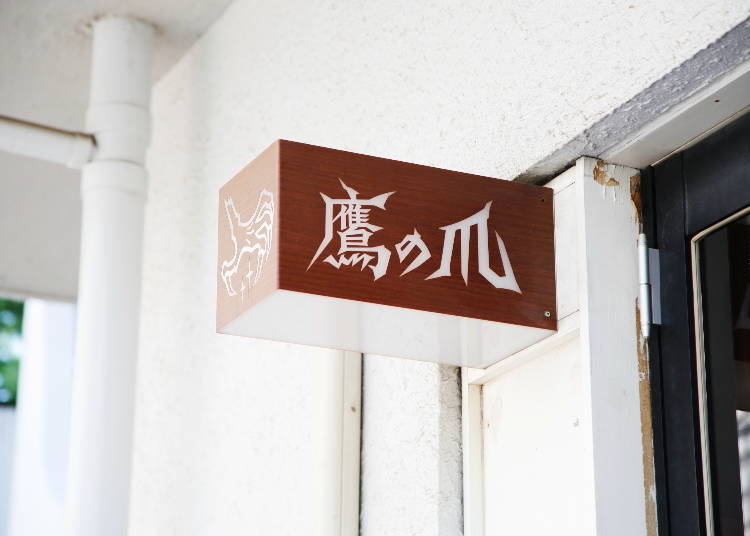 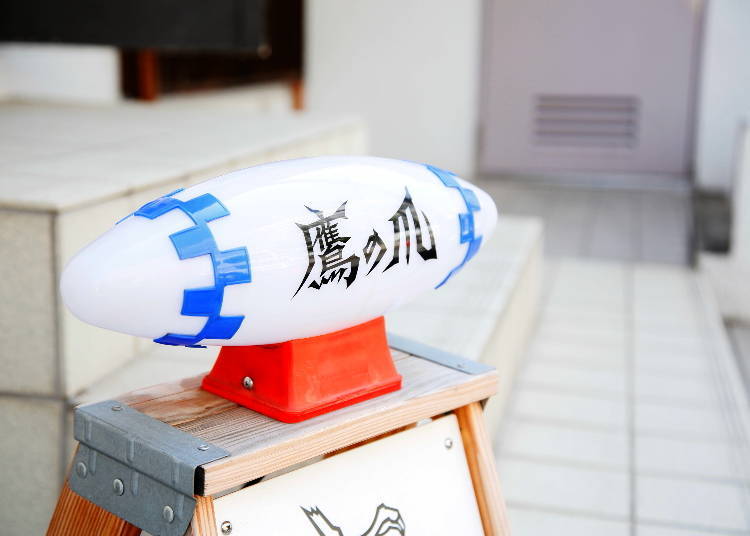