HOME Tokyo and Surroundings Tokyo Shinjuku Enjoy Tasty Sushi for Under 1,000 Yen at These 3 Sushi Shops! 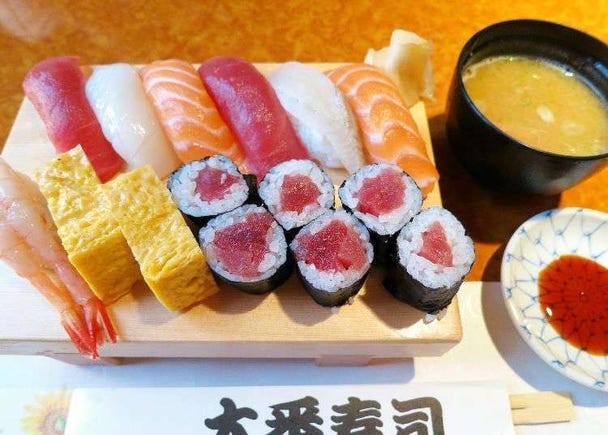 Enjoy Tasty Sushi for Under 1,000 Yen at These 3 Sushi Shops!

Sushi, by far the most famous and popular food of Japanese cuisine! While sushi comes in many different varieties, most people outside of Japan likely imagine “nigiri” first. The skillful sushi chef shaping the vinegared rice with a few, masterful gestures and placing the neta (topping) on top of it, probably tuna or shrimp – that’s what we see in front of our eyes when we think of sushi, isn’t it? Just watching the masters at work is a mesmerizing experience.

Another image that we tend to have of sushi is that it is upscale and expensive. However, the famous nigiri sushi was actually born as a street snack in Edo (old Tokyo) during the same-named Edo period. That original sushi was made with the fresh seafood caught in today’s Tokyo Bay, sold at food stalls. The people of Edo would stop by, get a piece of sushi and eat it right at the stall, standing, as a filling snack. Sushi back then really was the fast food of the time. Apparently, sushi during the Edo period also was two to three times bigger than today’s sushi! 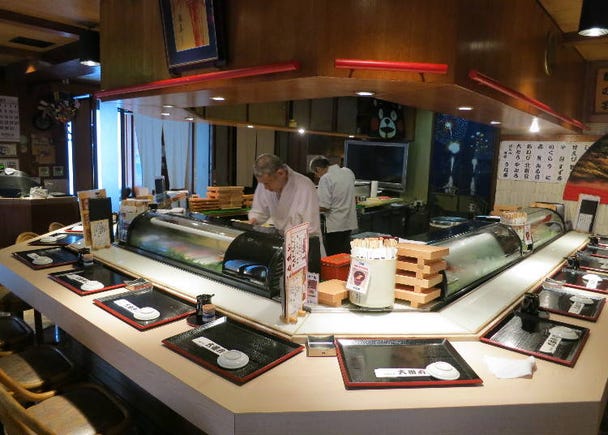 Of course, sushi has gotten a lot more diverse since then and so have the restaurants. In the Michelin Guide, you’ll find luxurious sushi restaurants that are notoriously hard to enter. They all serve exquisite sushi, without a doubt, but their atmosphere doesn’t exactly feel laid-back or beginner-friendly.

On the other side of the spectrum are conveyor belt sushi restaurants called kaiten sushi, a favorite of Japanese families. You’ve surely seen them before – small plates with sushi leisurely sit on a conveyor belt that takes them past the guests who choose their favorites from this predetermined selection. However, there are also many over-the-counter sushi shops that are committed to a welcoming, laid-back atmosphere even without a conveyor.

It’s up to you where you’re going to have your Japanese sushi experience, but we would like to warmly recommend three spots that are especially great choices for tourists while serving master-crafted sushi creations. In fact, major chains of conveyor belt sushi restaurants often have a “sushi robot” in the back that shapes the rice into perfect little beds. While that is neat and not a bad technique at all, handmade sushi by a proper chef is still somewhat different. That’s why we’re taking you to three authentic sushi shops in Shinjuku that offer this “sushi craftsman” experience – for 1,000 yen or less!

1. Oban Zushi Main Store: Sushi at 800 Yen for over 20 Years! An Authentic Sushi Lunch in Kabukicho, the Heart of Shinjuku 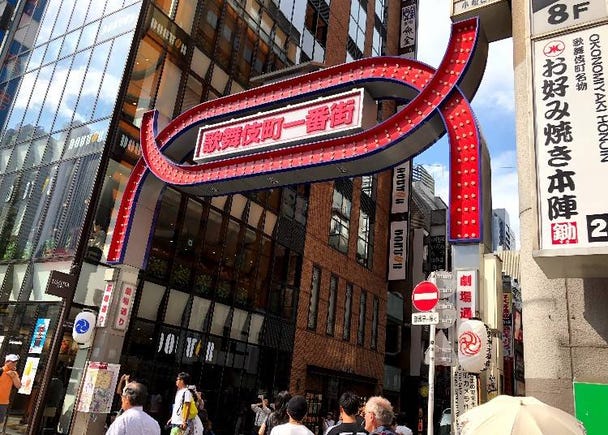 The first sushi shop on our list can be found in Kabukicho, the famous entertainment district right in the heart of Shinjuku. The glitzy neon-lit area is crowded with people, visiting the many restaurants and bars – it’s truly a city that does not sleep.

However, Kabukicho during the day boasts a rather different atmosphere. The Shinjuku Ward Office is also in Kabukicho and the Tokyo Metropolitan Government Building is not far away either. In the morning, you’ll see plenty of regular people going to work and it feels like a business area. 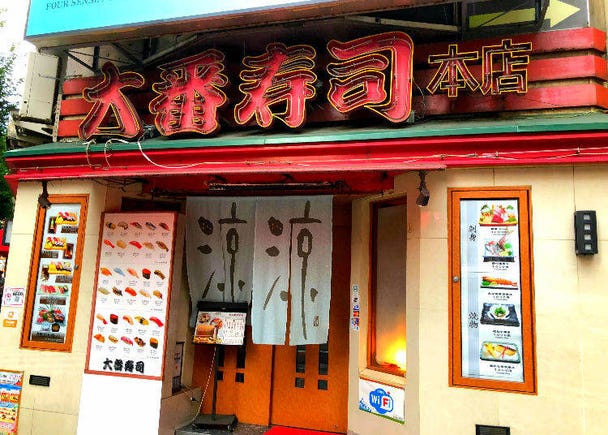 Oban Zushi Main Store is close to the Shinjuku Ward Office, right in the middle of the entertainment district. Founded in 1986, this store’s business hours have remained unchanged from 11:00 a.m. to 6:00 a.m. the next day. It is said that a lot of the shop’s regulars are people working in the entertainment district and recharging their energies after a long night with delicious sushi.

Lunch hours, on the other hand, are crowded with office workers but that wasn’t always the case. In the past, daytime business was rather quiet at Oban Zushi, which is why the shop tried to bring in more people for lunch with their “service lunch” nigiri set for a mere 800 yen. The “chirashi,” which is a bowl of mixed toppings on a bed of vinegared rice, is also highly recommended and available for the same price. 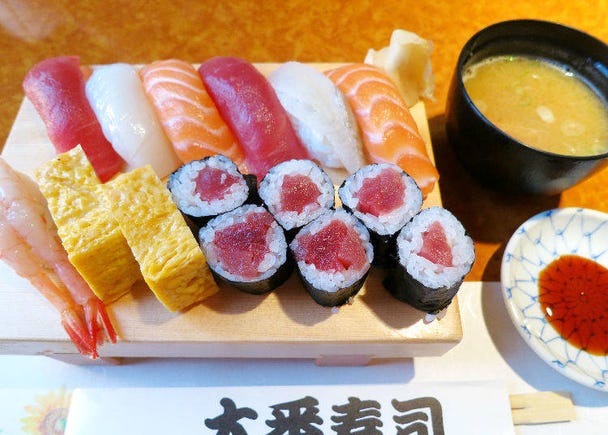 The “service lunch (nigiri plus soup)” for 800 yen. From top left: tuna, squid, salmon, tuna, flounder, salmon. From bottom left: sweet shrimp, fried egg, tekka maki (tuna sushi rolls). The wooden board that the sushi is served on is called “geta” because it looks just like the shoe.

Choice fresh fish is delivered to the restaurant straight from Tsukiji Market every single day. The rice is from the owner’s home area of Kurikoma Kogen in Miyagi Prefecture, chosen because it goes so well with sushi vinegar. Often, you’ll find sushi stores that have a different quality for lunch and dinner time, but Oban Zushi has the same delicious taste all day long. While tuna, shrimp, and salmon are basically offered year-round, the squid and whitefish changes by season. Sea bass and sea bream, for example, are also often featured in the service lunch. The miso soup also contained shrimp heads as we visited, but it apparently also gets its flavor from fish cuts on other days. 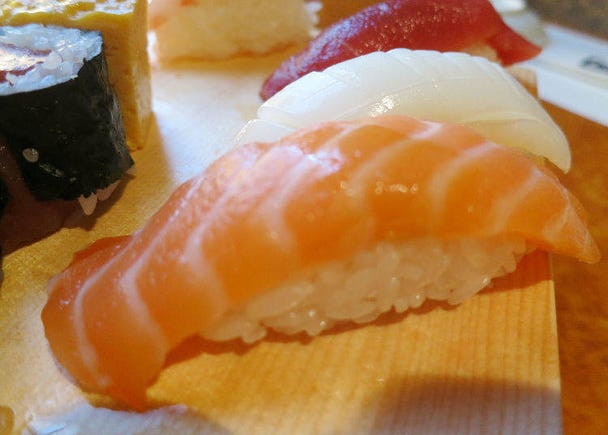 Salmon is the most popular choice of the store’s international visitors. Some even order it with mayonnaise, so don’t hesitate to ask if you have any special preference! 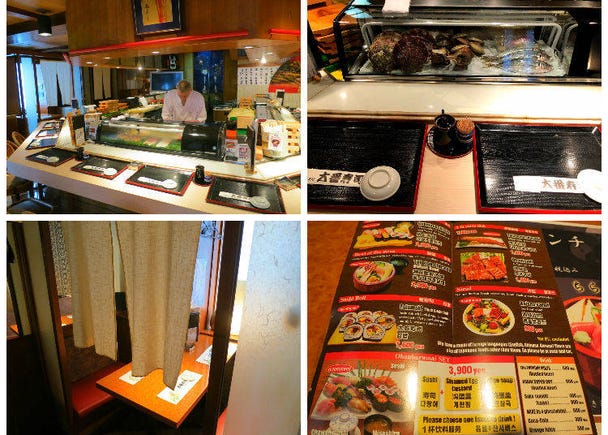 1) The counter where the chefs prepare the sushi right in front of your eyes. 2) There’s also a glass case showing the ingredients if the day. 3) Table seats are available if you don’t want to sit at the counter. 4) An English menu is available.

Currently, there are more and more people coming to Shinjuku for either sightseeing or business, so Oban Zushi Main Store is never quiet. The shop also offers an English menu and free Wi-Fi, so take a break, relax, and savor deliciously fresh sushi! 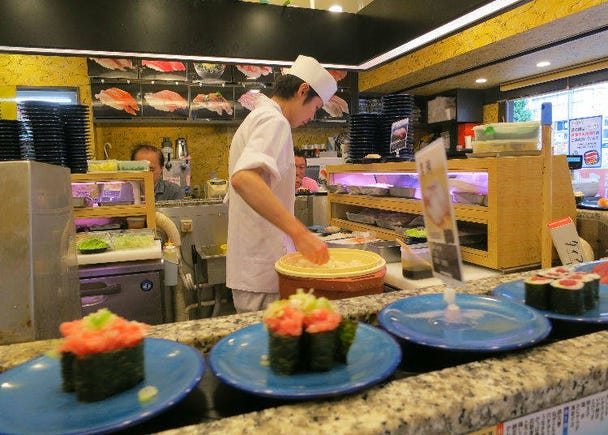 Oedo is a conveyor belt sushi restaurant where the chefs pay great attention to both technique and ingredients. Freshly-made sushi right at your fingertips!

Conveyor belt sushi is an integral part of Japanese sushi culture. Everyone is familiar with the sight of plates full of deliciousness moving on a belt, either from first-hand experience or from TV and internet.
Recently, sushi robots have become popular at these conveyor belt restaurants and there are more and more such spots that offer their sushi for 100 yen per plate. Not all, however – at Oedo in Shinjuku, skilled craftsmen put all their knowledge and skill into making every single sushi creation by hand. 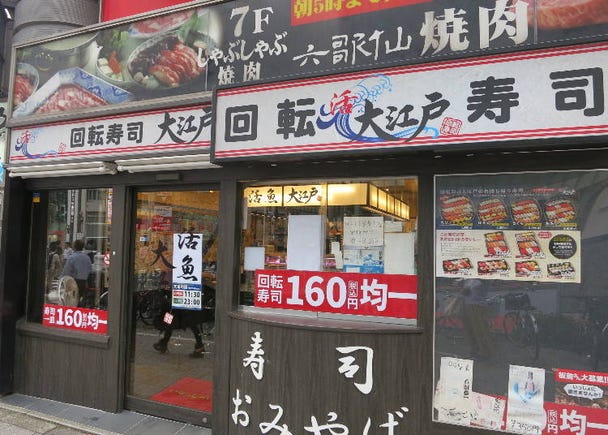 The sushi shop opened in 1985 with the simple yet wonderful concept of “serving delectable sushi for reasonable prices.” Currently, Oedo has 15 locations throughout Tokyo that cater to a wide range of people with plates for 130 yen to 160 yen. This time, we visited the Shinjuku West Exit location not far from the station where every plate goes for 160 yen. 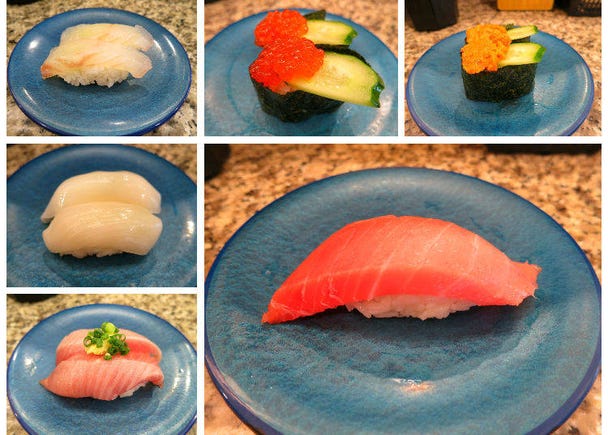 We had six plates for our visit. From sea urchin to salmon roe, every sushi delicacy is 160 yen, so we ended up with a bill of 960 yen in total. One plate features two pieces of nigiri sushi except for the medium-fatty tuna which comes as a single piece, meaning that we had a total of 11 nigiri. That’s quite a satisfying amount and even the solo tuna was well worth its money, as the fattiness made it quite literally melt on our tongue! 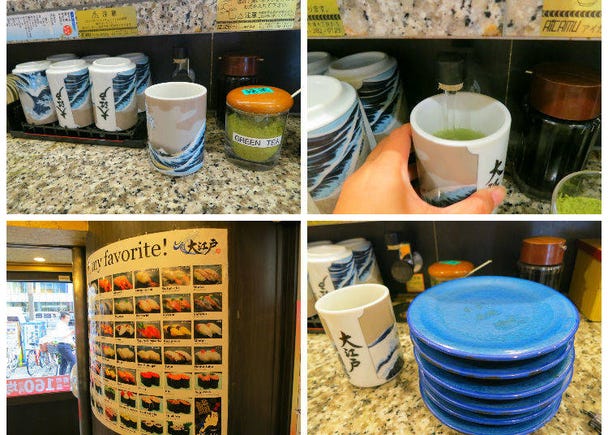 1) Hot water and tea powder at the counter. 2) Push the button for a serving of hot water. 3) The shop’s wall features a sushi menu in English. 4) The rule is to stack the plates you had.

Conveyor belt sushi has a couple of unique rules. There are cups called yunomi on the counter, which you can freely take to enjoy free green tea. First, put a bit of tea powder in your cup, then place it underneath the little tap. Push the button near your seat and hot water is poured directly in your cup for freshly brewed tea!
It’s also custom to pile up your empty plates next to you, letting the staff check the number of plates and their color at a single glance to calculate the price.

Last but not least, we visit Sushi Bar Nigirite at Shinjuku Station’s West Exit. In the beginning, this sushi shop was a standing bar, but the only quickly realized that people do want to sit down and enjoy their sushi delicacies slowly and changed the concept of the shop. Currently, only the signboard remains of the standing bar days. 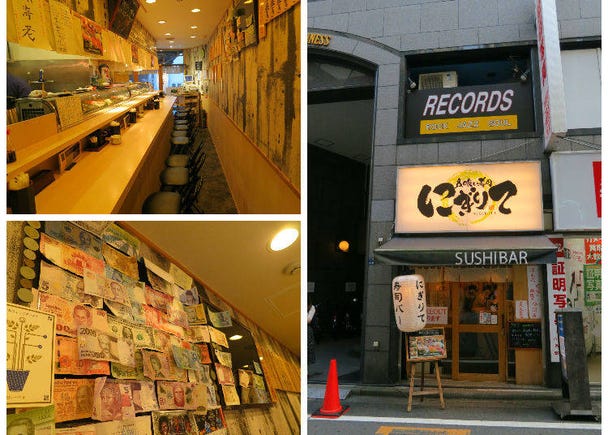 1) Inside the store. 2) International currency adorns one corner of the sushi bar. Story goes that a guest from America stuck a Dollar bill on the wall as a form of tip, since Japan doesn’t have a culture of tipping. That led to people from other countries leaving behind various bank notes.

Sushi Bar Nigirite’s concept is “enjoying reasonably priced sushi at the counter.” There are three different lunch sets on the menu that cost less than 1,000 yen, with the most reasonable being the “sampling lunch” for a mere 500 yen and includes 6 nigiri sushi and one temaki (hand-rolled sushi cone). 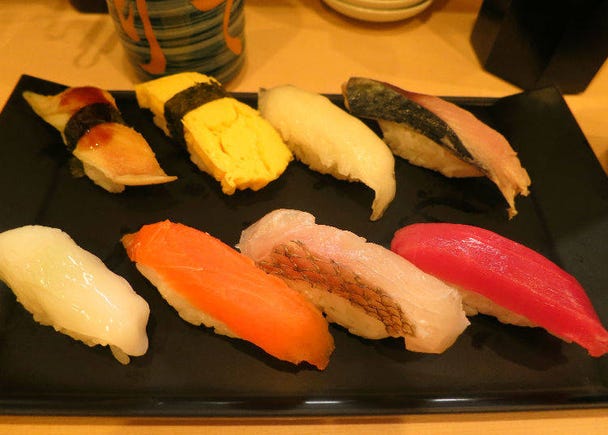 From top left: conger eel, fried egg, engawa (meat from the base of the fin), pickled mackerel / From bottom left: squid, salmon, sea bream, tuna. The sushi toppings change by season and catch of the day.

We went for the “seasonal lunch” for 780 yen. The two rows of nigiri sushi, eight in total, look amazing and the miso soup that comes with the lunch adds an extra kick of flavor. How can this lunch be so cheap? It’s a simple question that the owner and chef Keiichi Tsuchiya has an equally simple answer to: “Because I want to offer it this cheaply.” 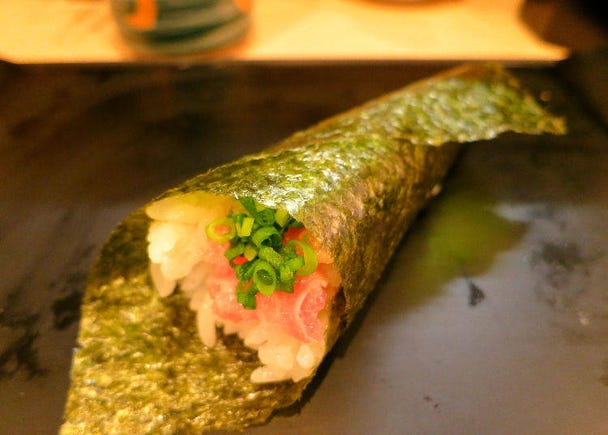 The temaki roll of the day was filled with negitoro (tuna minced with Welsh onion).

By the way, one of the things that had a big influence on Mr. Tsuchiya opening his shop was the international tourists visiting the sushi restaurant where he trained. He got to witness the excitement and surprise that simple sushi created, so he decided that he wanted to “make Japanese people who have grown up with sushi feel that kind of surprise and excitement that international guests feel.” 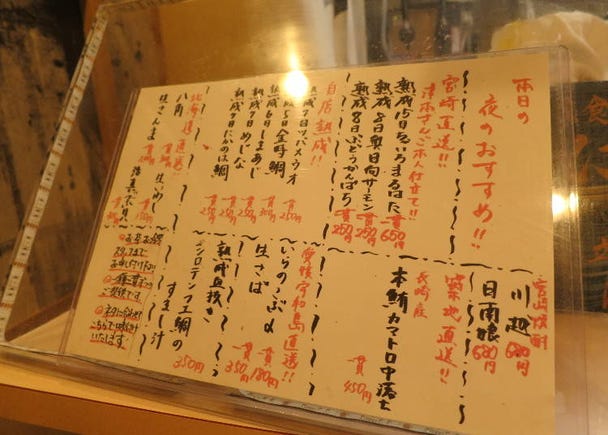 The aged sushi menu in the evening.

That’s why he offers aged sushi during the evening to “offer this surprise and excitement” to his diners, as he says. He uses a technique called “Tsumoto-style thorough bleeding” to remove all the blood from the fish to age it before serving it on sushi rice. It might seem like a strange style at first, but from 250 yen per serving, it’s a very reasonable gourmet experience that you shouldn’t miss out on!