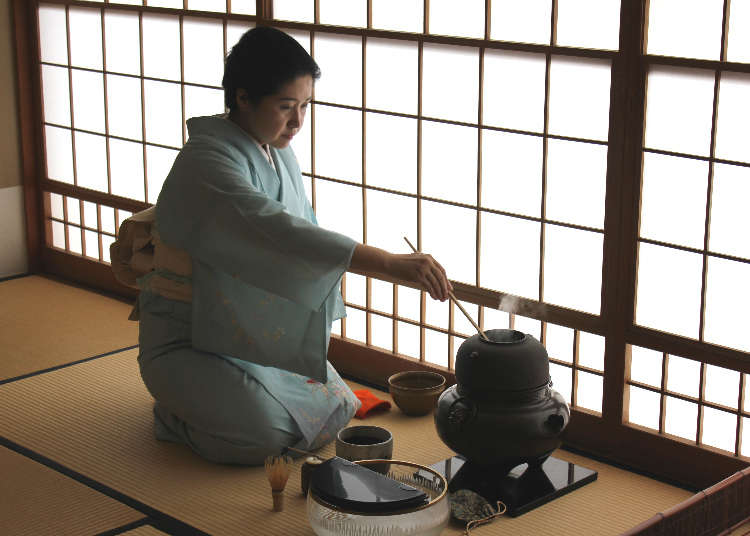 Four students who study Japanese in a university in Canton, China, have made their first trip to Japan. They experience the culture they've been interested in from long before right at the source. Today, they'll be taking on a genuine tea ceremony -- and this is what they saw!

Kaiseki Food to Enhance the Flavor of the Tea

Providing today's beginner tea ceremony lesson is Masudaya, located a three minute walk away from Tokyo's Shin Ookubo station. This storied shop, 90-years-old when the Olympics come around, has both a proper tea house in a quiet neighborhood and a tea ceremony classroom that sells the highest quality tea utensils gathered from all over Japan, as well as provides lessons for beginners and foreigners. 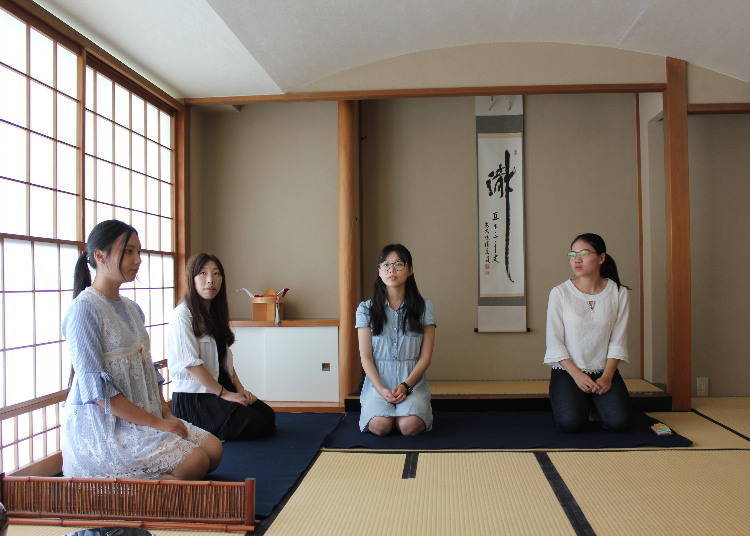 The four have just entered the tea room, and they're nervous.

The four wear white socks, as not to dirty the floor with bare feet, and sit on their knees in the main room. Tea ceremony is the ultimate act of hospitality, where the host thinks of a theme that fits their guests and begins their tea party. With the heat of summer back at the end of August, today's theme is "Memories of Summer."

On the wall of the room is a scroll with the character for ‘waterfall’ written on it. It's a small detail by the host, hoping to cool off her guests a little bit in the summer heat. Before long, the food is carried into the room. 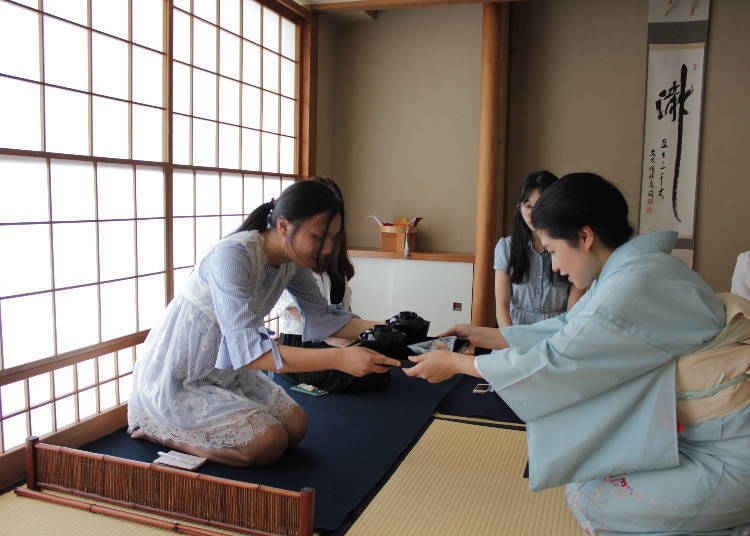 Handing over the tray of food. 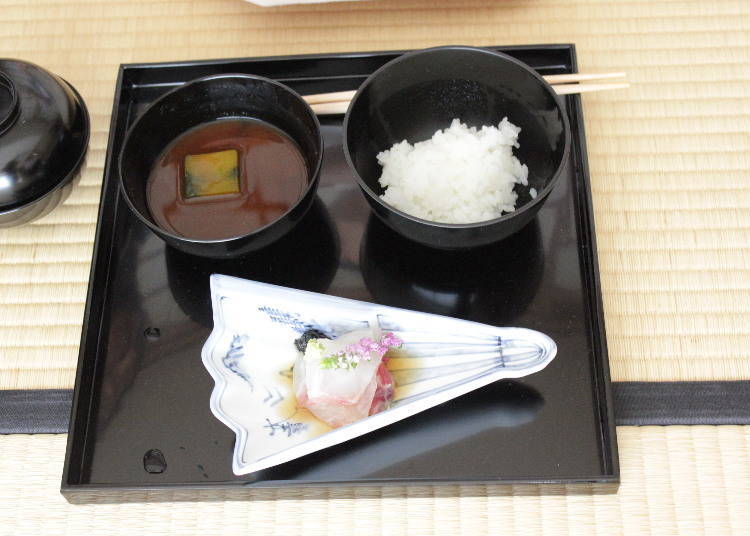 The first course is miso soup, rice, and fish doused in vinegar.

Today's tea party is done in the Kyoto style. It opens with Kaiseki food, which I'm told often uses fish doused in vinegar. The fish is to be eaten after the sake is presented.

The four eat while being taught the delicate manners of dining etiquette, such as placing the lids of the rice and miso cups together on the side, and to place the chopsticks on the tray's frame while eating. Before long the main course arrives: a cup of soup consisting of seasonal eel, winter melon, and mushrooms flavored with lemon. The food is brought out course by course to keep it at its warmest. 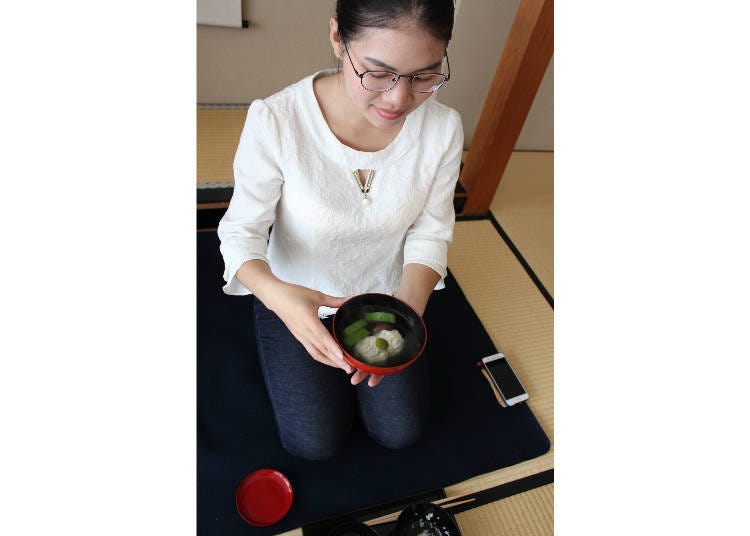 A cup of soup with delicately cut eel. It smells of lemon.

"This boiled dish is really good. It has a very seasonal taste."

"I liked the fish with vinegar."

Afterwards, a plate consisting of Kyoto-style grilled fish, taro, kuruma shrimp, and okra is brought out as a side. 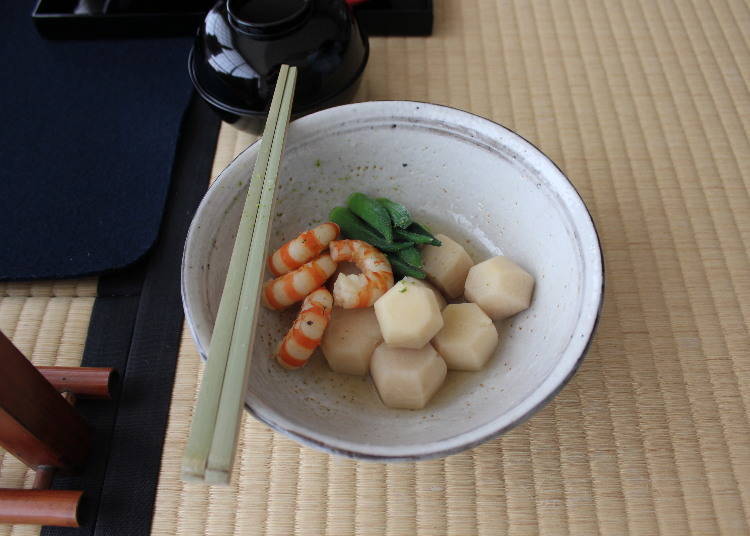 You take out what you want, then pass the bowl to the next person.

"I've been learning tea under a Japanese teacher back in China, but I've never had Kaiseki food before the tea."

Even the student who's learning Japanese tea ceremony in China and makes tea thrice a week is surprised. Then, small grilled fish and fruit is brought out before the sake. Drinking sake is said to cleanse you before you drink your tea. 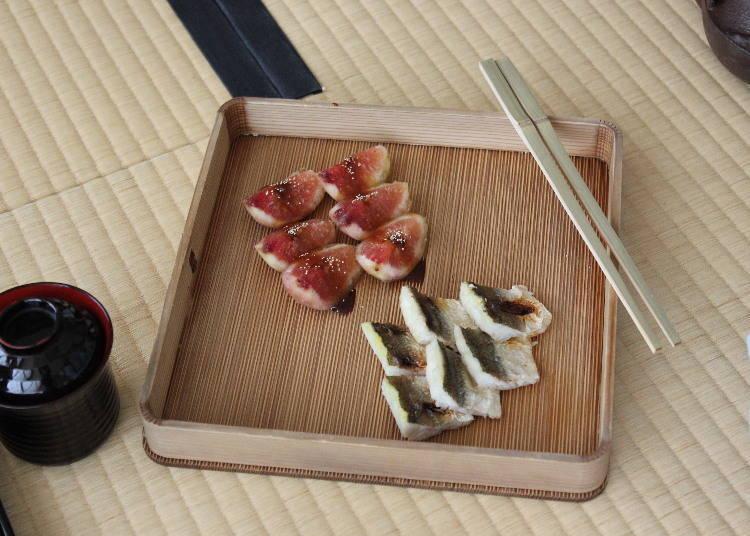 A beautiful side for sake. You eat it while you and the host pour each other sake.

When the group starts feeling full, we learn that this was all in preparation to drink the tea, all to make the dark matcha taste better. Dark matcha is a very strong, concentrated form of matcha, and is the greatest of hospitable drinks. It's the true main course of today's ceremony. 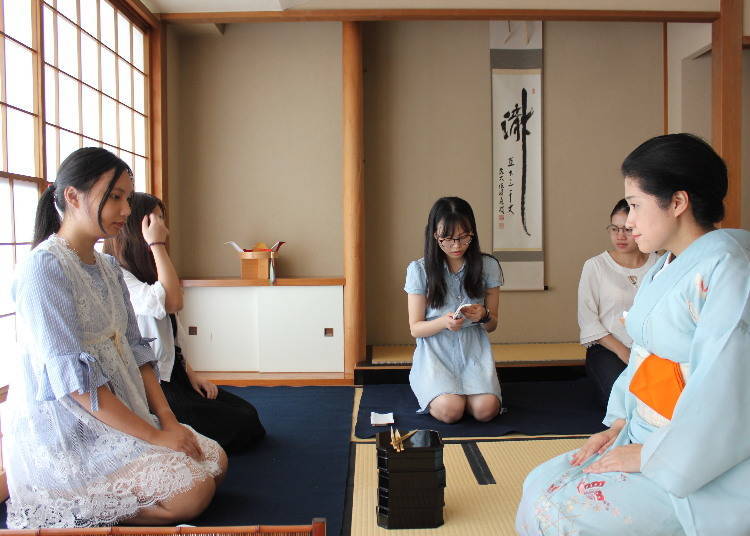 Nested boxes are carried into the tea room. Inside are beautiful sweets with yellow and faintly red grains atop them, called hatsuhagi. They're from Genta, a store famous for its raw tea sweets, and even one studying tea in Japan doesn't often get the chance to sample them. The group moves them from the box to the papers at their hands, cutting them bit by bit to eat them. 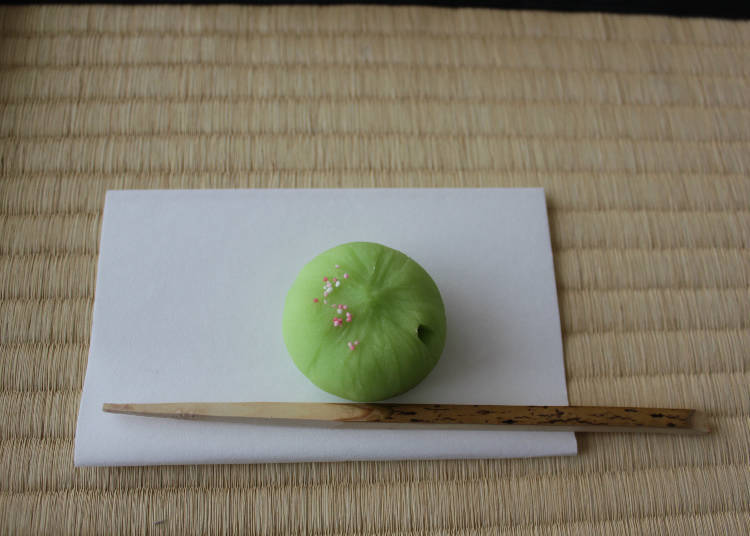 The beautiful treat, hatsuhagi. It's sweet, but the flavor doesn't overstay its welcome.

As they eat, the komatcha is poured, boasting a deep green I've never seen before. Each member sips it three times, wipes their mouth with their tea paper, and passes it to the next person. Now, how does it taste? 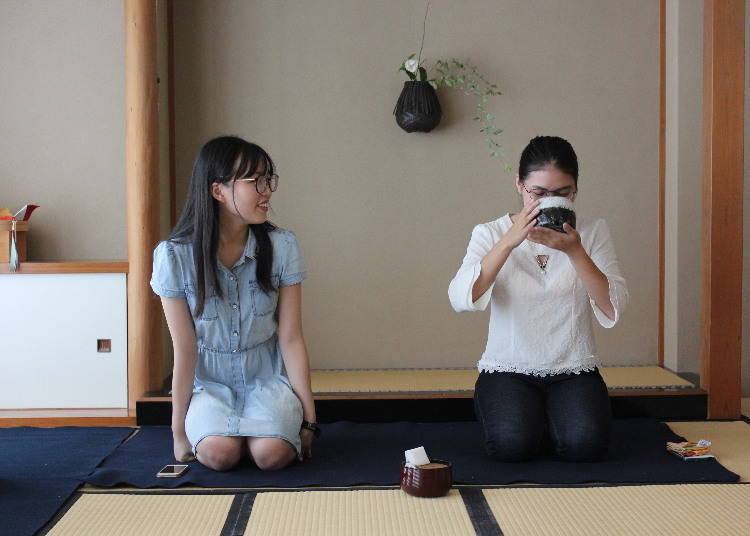 Behind the two is a Gion Mamori flower that bloomed this morning. The tea room received it from Kyoto's Yasaka Shrine.

It seems to have tasted different and far richer than any matcha they've tasted before. One of the girls is curious about how the host often folded a cloth while making the tea, so she asks a question. 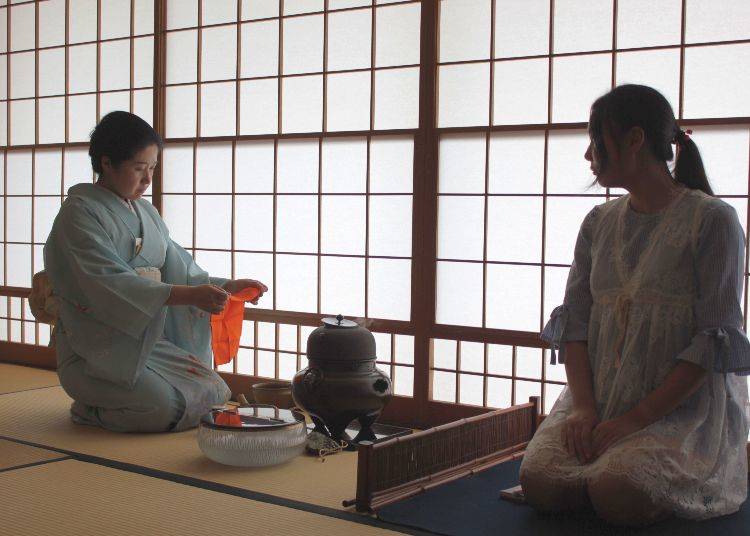 Why do you look at the cloth and fold it?

"Why did you look at the cloth and fold it before making the tea?"

"A good question. The host selects tools, utensils, and flowers that go with the theme -- Memories of Summer -- and conducts the tea ceremony. Checking that this silk cloth is clean and wiping down the teaspoons is an essential act, purifying the tools. Then, I have everyone see my preparations, as well as how I clean up both during and after they drink. If you've felt the theme even a little bit as you did, the tea ceremony is a success. It is as though I am revealing a love letter to everyone."

Next, they have dried sweets and light tea, wrapping up the tea ceremony. 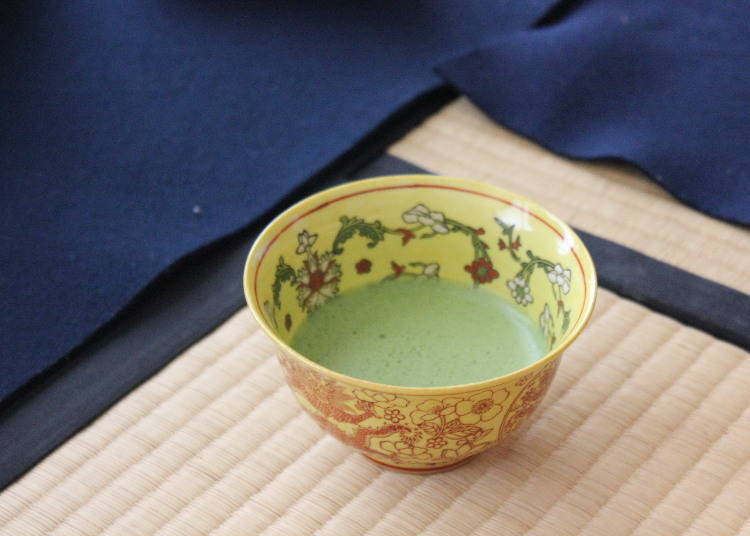 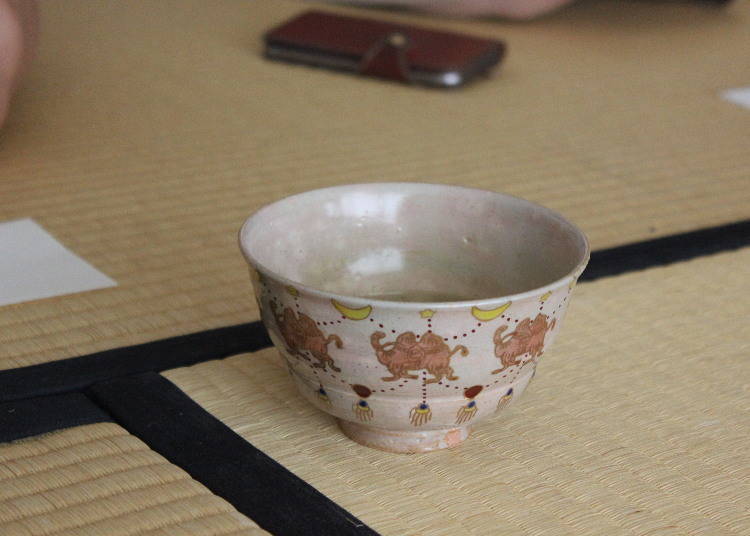 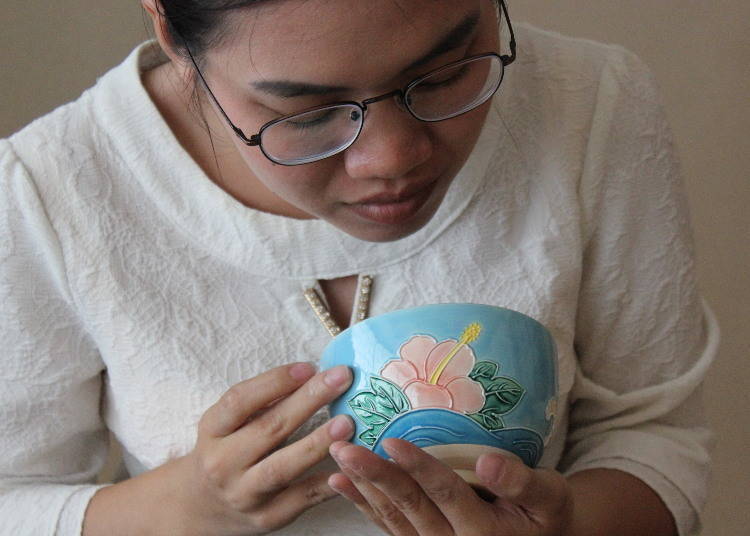 Everyone is served with a different bowl. The second bowl has a pattern of camels on the Silk Road. The one on the bottom was designed with Hawaii in mind.

"It was all so new: the food was very tasty and the utensils were beautiful. The tea ceremony teacher was very nice, and I was really moved."

"I feel like I understand that 'love letter' feel a little bit."

It was a bit painful to sit on their knees the whole time (chairs are available in case of need), but the beauty of the ceremony won over that. 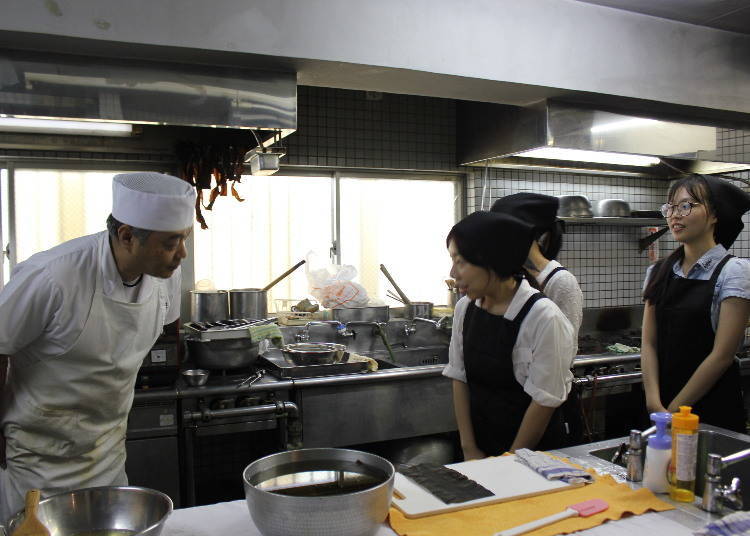 It's time to learn!

The four move to the kitchen and wear aprons. Now, they'll be learning from the same chef who made them the tasty Kaiseki food they'd just had. They'll be learning how to make dashi, the very core of Japanese cooking, and then how to use that dashi to make miso soup, rolled omelets, and eggplant in soy sauce. So, does everyone cook at home?

Apparently, in China, it's usually the men who cook, and some of our students complain that they don't have anyone to cook for.

First, they poke holes in the eggplant to let the heat spread through it, then grill it over a net. When the skin is a crisp black and it's soft to the touch by tongs, they take it out and put it in an ice bath to cool it. 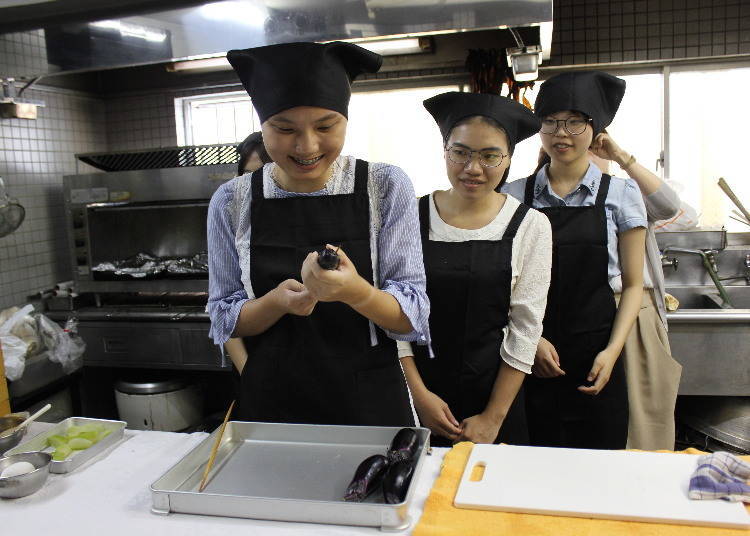 Unaccustomed to cooking and completely surprised. 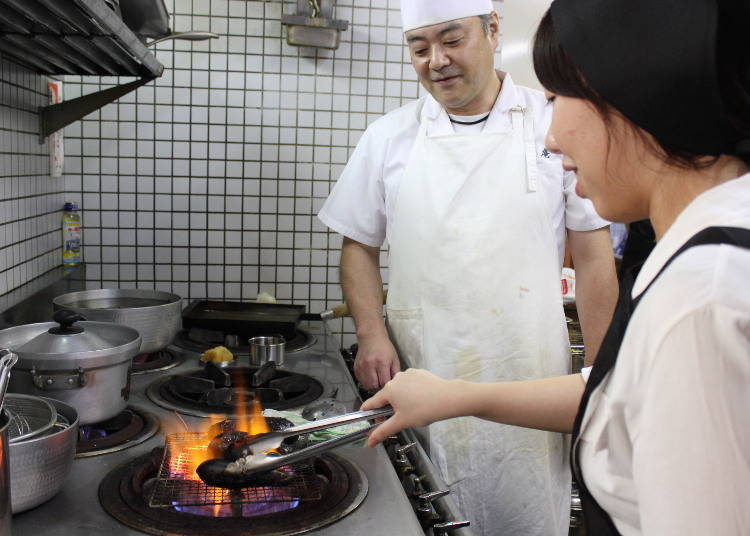 Grilling an eggplant over a net.

Next up is the dashi. The cook starts heating up a prepared pot of konbu submerged in water, and takes the konbu out right before it boils. Then, he adds in freshly shaved bonito flakes, takes out the waste and makes dashi. After filtering out the bonito flakes, it's time to taste it. 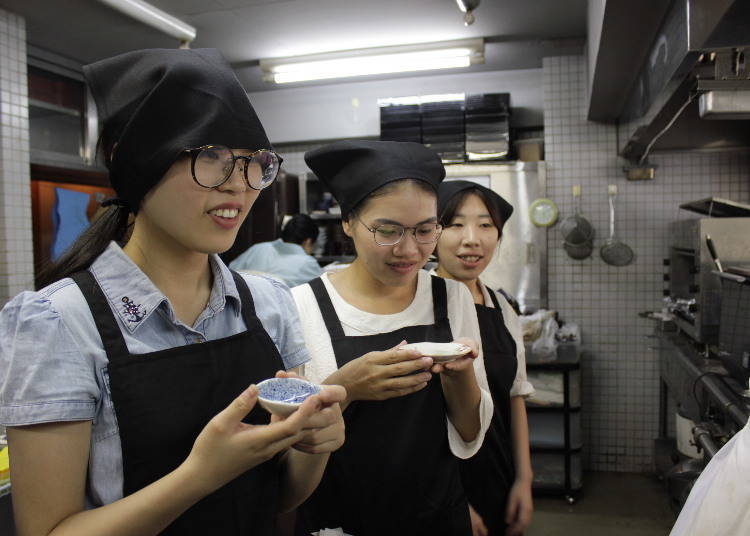 Moved by how delicious fresh dashi is!

Fresh dashi is often used in soups, miso or otherwise, and boiled foods. First, to flavor the grilled eggplant, he mixes the dashi with sake, mirin, and light soy sauce. Miso soup is essentially 10 parts dashi and 1 part miso. He puts the mixture over fire and turns it off before it boils.

"The flavor's gotten a lot richer than before."
"This is really tasty, too."

The third way to use fresh dashi is a dashi rolled omelet. You mix dashi into the egg as you fry it, and the trick is to roll it up well. Now, let's give it a try. 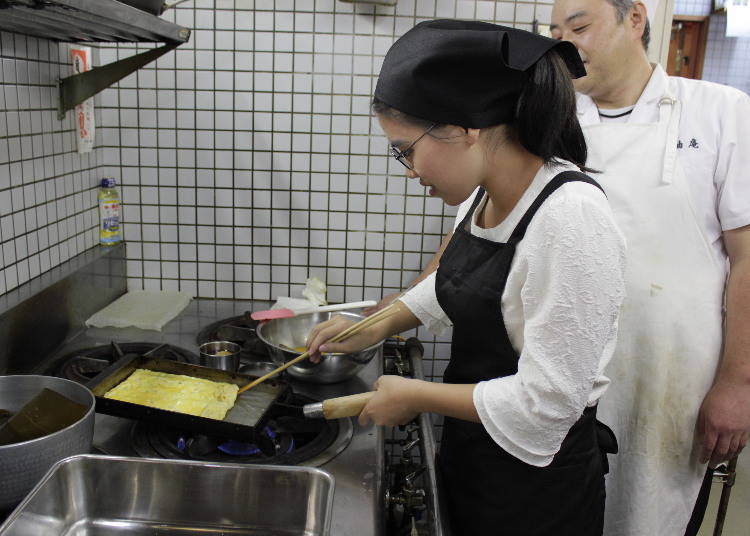 Rolling it outward is the Kyoto style.

The freshly fried egg is rolled up. Now that the eggplant has cooled, they take the skin off with their hands, submerge it in the dashi, and cool it further in the fridge.

Then, they put winter melon into the miso soup, add in Japanese peppers, cut the egg, and supply rice. Then they take the eggplant out of the fridge, cut it into edible pieces, put bonito flakes on top, and proceed into tasting time. 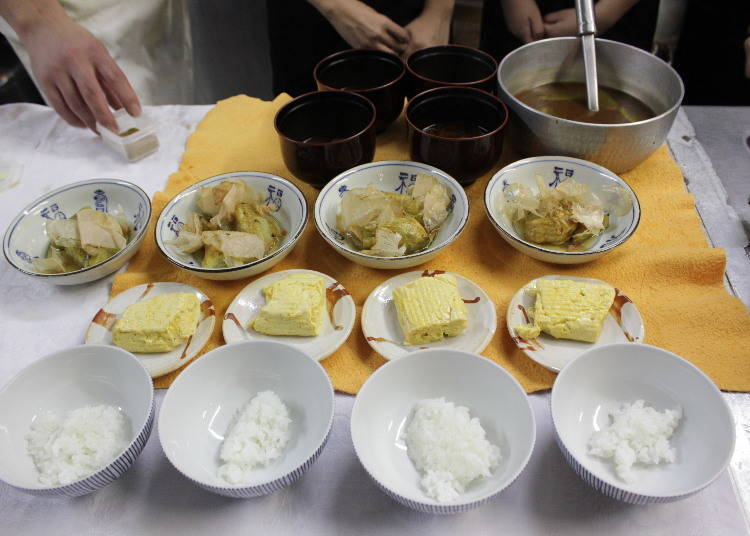 It's finished! And now to taste it. 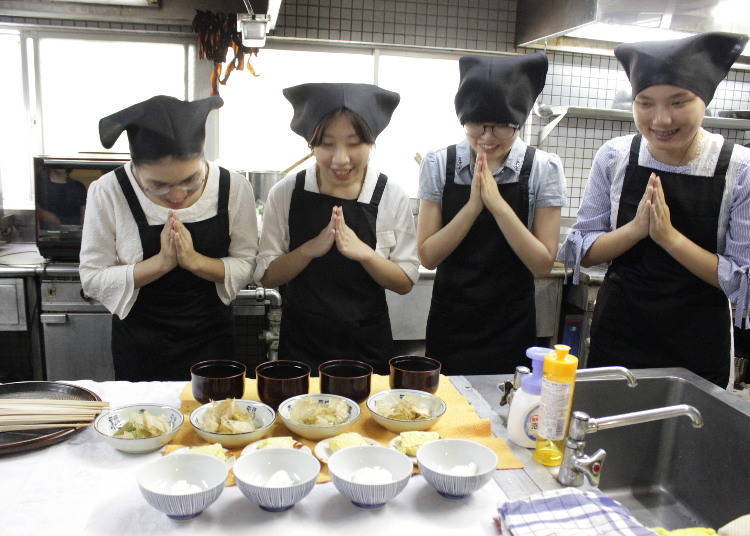 "This is the first time I've had a roll omelet that isn't sweet, but it's good."
"Winter melons taste really good in miso soup."

Though the staff helped, everything has a high-class, refined taste to it. The red miso in the soup goes very well with the dashi.

So, the four have had an experience they wouldn't normally.

"The very Japanese seasonal ingredients were wonderful. It was difficult to sit on my knees and eat with etiquette, but it was kind of like a ritual. I felt like I could see the Japanese spirit in all those rules."

"I'm really moved that they even taught me the proper way to eat the food, and I was able to learn a lot about tea ceremony. The teacher in the kitchen was really nice, and I'm glad I was able to make an omelet."

"I learned about Kaiseki cooking for the first time. Actually seeing and experiencing it was really interesting, and I got to learn the interesting things that go into Japanese cooking. It was very educational!" 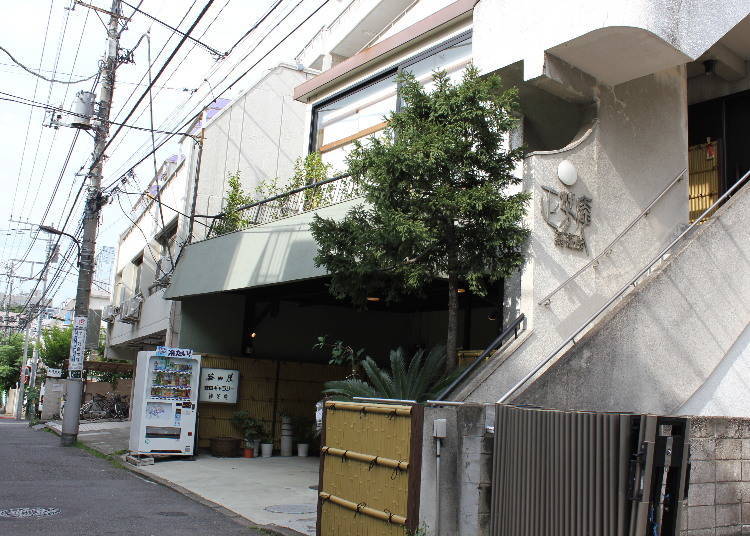 The second floor of the shop also has a gallery where you can see the works of the glass artist and predecessor of the classroom, Yoshinori Masuda. His works have been featured in modern art galleries, and he even gave one to Pope John Paul II, so foreign visitors also visit this gallery. (You can see if you ask.) 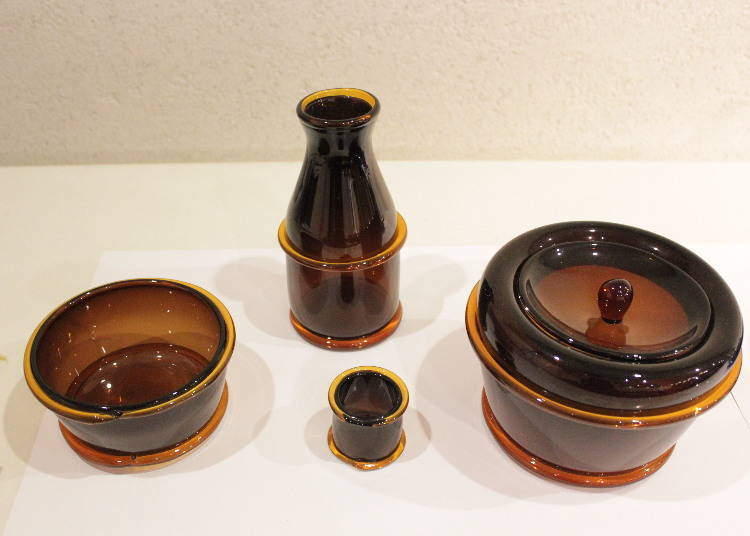