HOME Tokyo and Surroundings Tokyo Shibuya Where to Experience a Japanese Tea Ceremony in Tokyo: Joining Waraku-An in Shibuya! 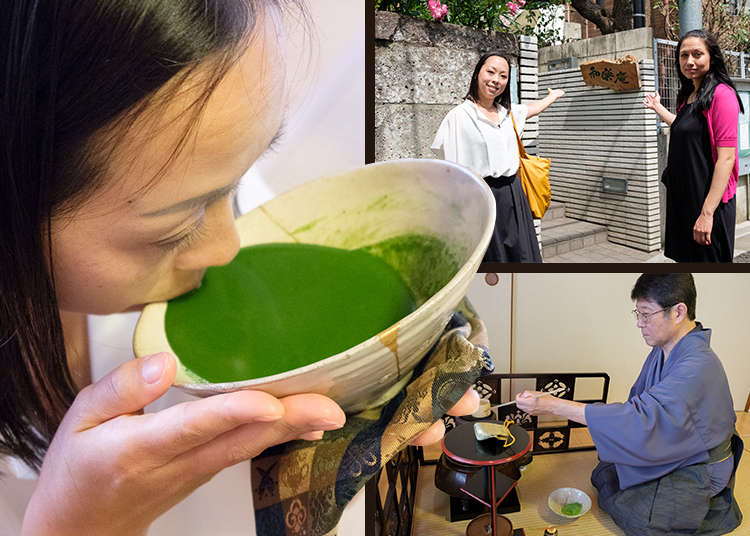 Where to Experience a Japanese Tea Ceremony in Tokyo: Joining Waraku-An in Shibuya!

What comes to mind when hearing the words “traditional Japanese culture”? For many, green tea is one of the most obvious symbols connected to Japanese culture. Green tea is strongly associated with Japan; it’s more than just a drink, it’s tradition. In particular, the ceremonial preparation of Japanese matcha, the powdered form of green tea, is revered in Japan as a traditional ritual that is preserved to this day. To the foreign eye, the Japanese tea ceremony has long been regarded as something of an enigma: fascinating, yet arcane. Even most Japanese people do not fully know the intricacies involved in performing this ritual.

However, an increasing number of tea houses have begun opening their doors to matcha novices, offering instruction and authentic experiences to Japanese and international visitors. Waraku-An, located just two stops from Shibuya, is one such place that welcomes both Japanese and English speakers the chance to participate in an authentic Japanese tea ceremony! 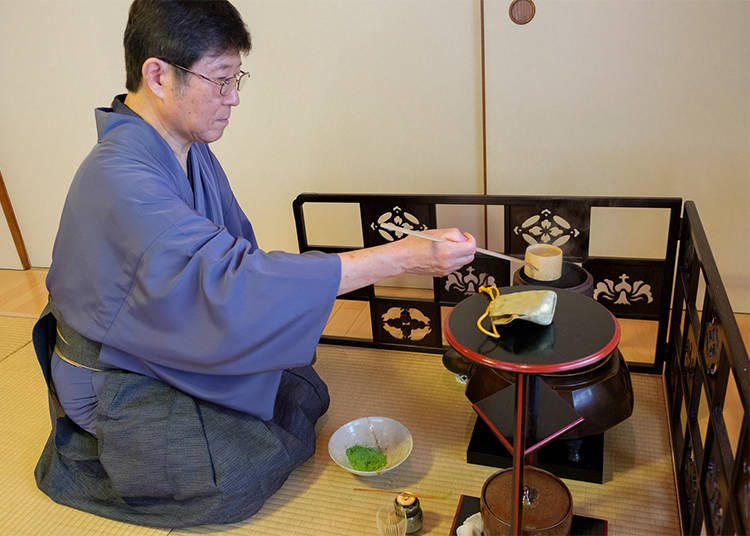 If you have ever been curious about the Japanese tea ceremony but hesitant to venture into unfamiliar territory, Waraku-An is the perfect place to learn and, more importantly, to really experience the tradition for yourself.

The Tokyo tea master speaks a bit of English, and there is an interpretation service available upon request to accommodate English, Chinese, and Korean speakers – make sure to book this service one week in advance. The kind staff will even pick you up right at the nearby Komaba Todai-Mae Station.

While the image of the tea ceremony, called sado in Japanese, is generally a serious one, Waraku-An creates a comfortable atmosphere, staying true to their motto of “oishiku, tanoshiku, utsukushiku,” meaning “Delicious, Enjoyable, Beautiful.”

There is no need to wear a formal kimono; come as you are, in clothes you feel comfortable in. Although geta (traditional Japanese sandals) and tabi (the traditional Japanese socks that are split in two at the toes) will be provided for the ceremony, it is asked that you also bring a pair of socks, as etiquette dictates that bare feet should not come in contact with tatami. 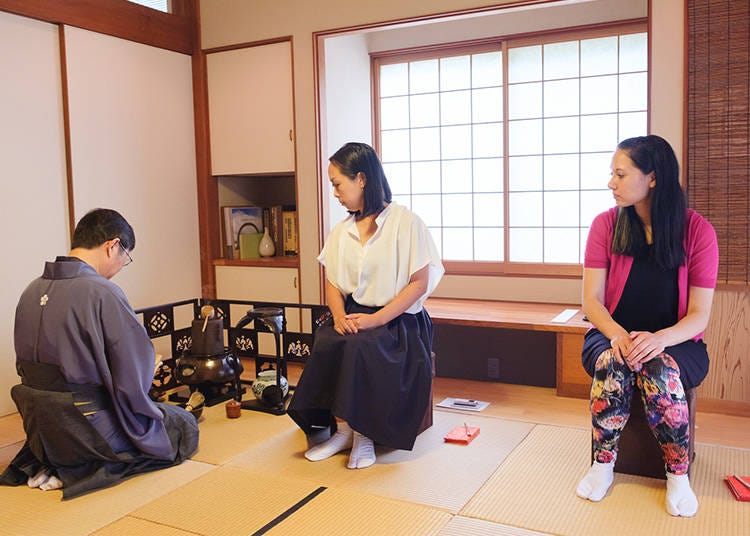 You may have already heard that sado involves long periods of time in the dreaded-by-many seiza position, which involves sitting on top of your folded legs. While this is a sitting style that most Japanese have grown up practicing, people from other countries who are not accustomed to it may find it painful to sit seiza for long periods of time. However, Waraku-An offers the option of chair seating for anyone who would like it. It’s all about how you feel most comfortable. 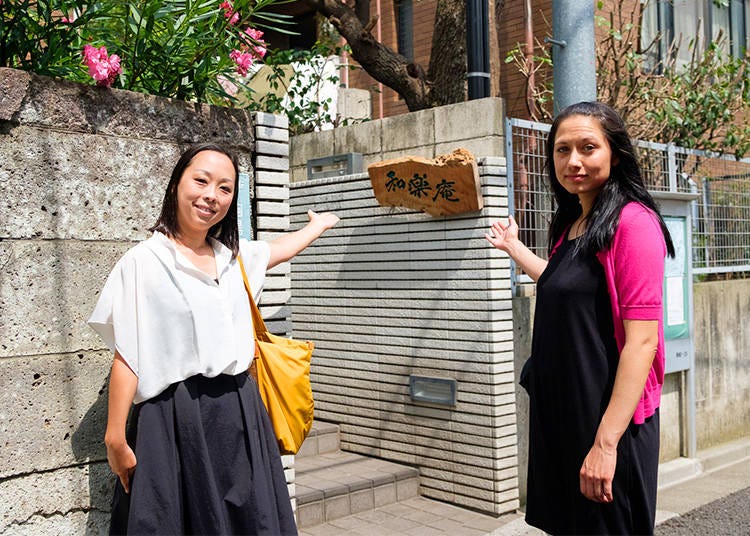 I took a visit to Waraku-An with Japanese writer Kumiko, to see how a tea ceremony experience would play out with both a native to the land and an American. While I am admittedly a bit crazy for matcha and green tea in general, I had never participated in sado before. Not surprisingly, Kumiko was much more familiar with the tradition and its customs, despite not being a tea professional. 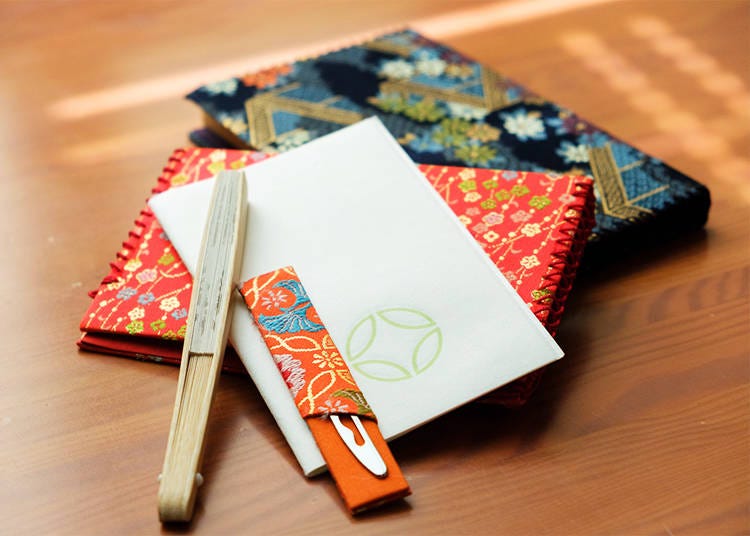 Waraku-An offers a few different plans, ranging in price from 5,000 to 10,000 yen. Depending on the type of plan you choose, you can drink usucha (thin matcha), koicha (thick matcha), or both. We began with the Introductory Tea Ceremony, during which we drank usucha with a traditional Japanese confectionery.

Before beginning, we changed into tabi socks and were given a fukusa basami, which is a small case that includes a sensu (Japanese folding fan), a type of paper called kaishi, yoji picks, and a fukusa silk wrapper. We carried this throughout the ceremony. We were also given a printout explanation that had been translated into English for reference. A bell ringing the same number as the number of guests present signaled the official start of the tea ceremony. 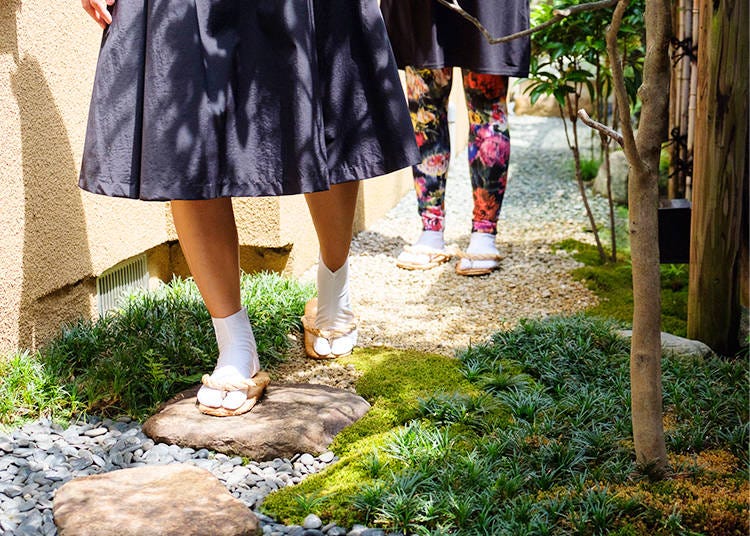 We put on the provided zouri and gently clacked our way down a small garden path around the side of the house, appreciating the beauty of the greenery and pathway, and taking special care to step on the tobiishi (stepping stones) rather than the grass. 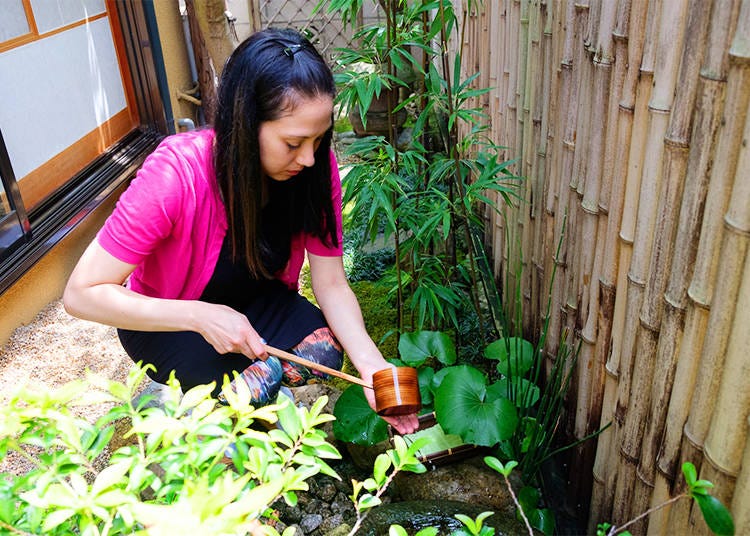 It was here that we encountered the tsukubai, which is the stone washbasin used in the purification process – an important step before entering the tea house. To be considered clean enough to take part in sado, you should rinse both hands, as well as your mouth with water from the tsukubai, by using a ladle called a hishaku. Once we completed this step, we entered the room as instructed, taking of our geta at the shoji entrance, and sliding inside on our knees.

An Unexpected Element of tea ceremony: Observing the Beauty 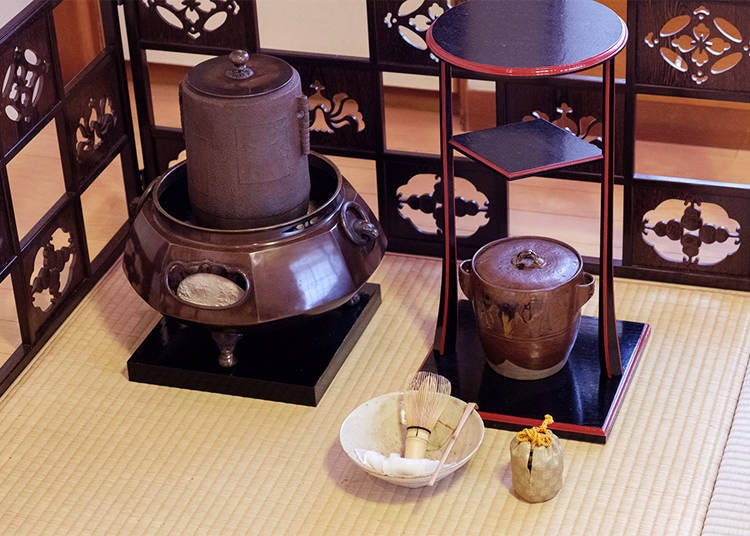 Having no prior firsthand experience, I knew very little about tea ceremony, so I was surprised by all of the rituals involved that didn’t directly involve the tea itself. For starters, once we entered the tearoom, we were instructed to observe and bow before the tokomae, which is the front area of the tearoom.

This is where the “beauty” of the motto comes into play. A large part of the ritual involves the observation and appreciation of the various tools and elements used. This involves looking carefully at the kama (kettle), the fire pit, the hanging scroll. I learned that tea ceremony is also a treat for the eyes, and it was a delicious sight. 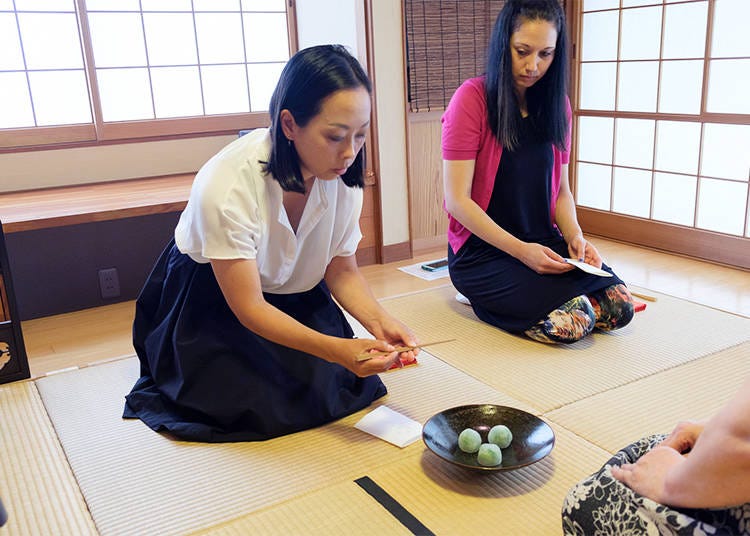 Before drinking the tea, traditional Japanese confectionaries were served. This is when the kaishi was taken out. One piece of the paper was used to place the sweet on, and also to wipe the serving chopsticks with. It was a sweet and delicious snack, perfectly preparing the tastebuds for the tea soon to come. 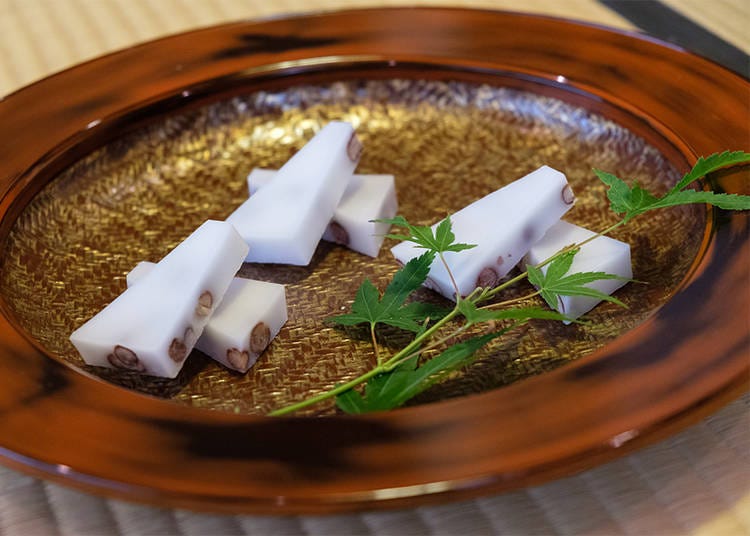 By the way: in most cases, the sweets served at a tea ceremony are carefully chosen to represent the season, both in looks and in taste. While eating, you are also meant to be viewing the start of temae, which is the term that refers to the process of preparing the tea, performed by the tea master, who whisks the matcha powder and hot water into a frothy and inviting tea. Once the sweets have been eaten, it’s time to drink matcha.

Usucha in Tea Ceremony: How to drink Usucha 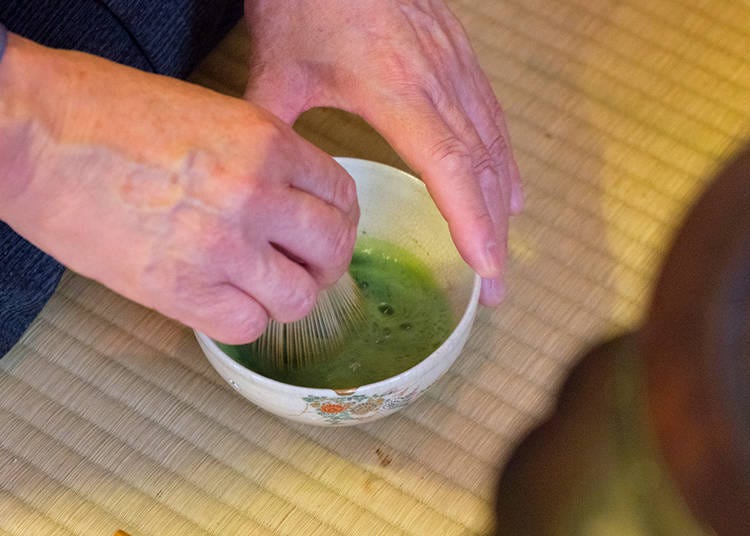 It may come as a surprise to learn that the tea is served in a single bowl, called a chawan, rather than individual cups. Once the tea has been served, you should also take a moment to look closely at the tea and consider its fragrance, foam, color, etc before drinking it. Also be sure to admire the chawan it is in. As you may have figured out by now, the Japanese tea ceremony is made up by many of these small moments of introspection. 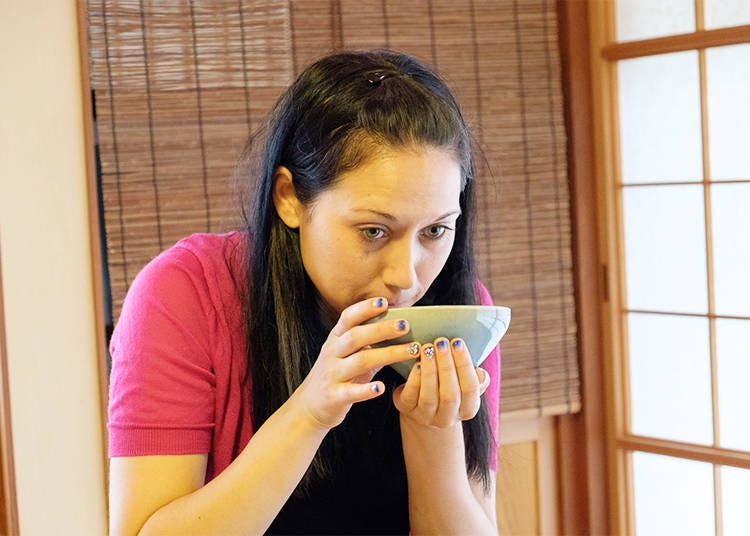 Because you share the matcha, it’s important to leave enough for the rest of the guests. I began to drink the tea, savoring each sip. Even though it was the ‘thinner’ tea, the usucha had a balance of a delicate but rich flavor that complemented the sweet taste that still lingered in my mouth.

Once again, the word “Delicious” is at the forefront of the experience. At this point, you will hear the tea master ask “Ofuku kagen wa ikaga deshou ka?” which is a standard question meaning “How is the tea?” It is customary to reply with “Kekko desu,” which means “very nice.” (However, if you forget the Japanese I am sure they would not hold it against you if you said it was fantastic, or some other nice word of your choosing.)

Once you’ve sipped your share of Japanese tea, wipe the edge of the bowl with your kaishi and pass the chawan to the next guest. 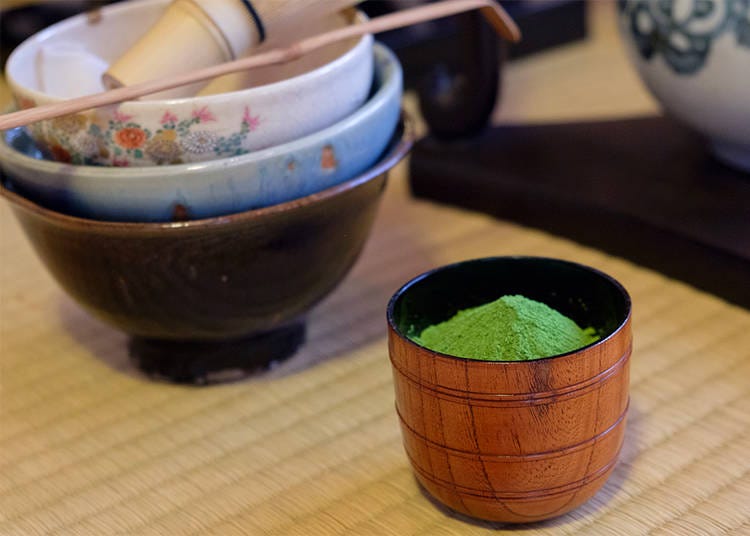 Once the final guest has drunk the remaining tea, the master closes the ceremony by rinsing the bowls with hot water and announcing “Oshimai ni itashimasu” meaning that it has finished.

Despite this, there is actually still a little more to it! There was more observation of the tools, and once again we had the chance to admire the chawan, this time, completely empty. This is traditionally done while leaning forward in seiza, while carefully turning the bowl around in your hands. I even got to examine the container for the powdered tea called natsume and the chashaku, or tea ladle.

During the final moments, the tea master bows at the entrance of the tea room and the guests return the bow. Now the ceremony is officially finished.

What kind of tea is used in Japanese Tea Ceremony -
Usucha vs. Koicha: Which Should You Choose? 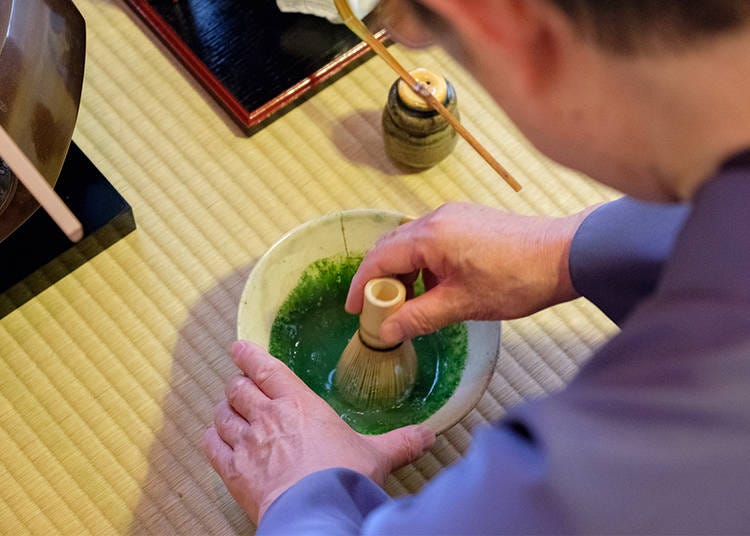 Just a note about koicha, the “thick” tea: As mentioned earlier, you can choose between koicha and usucha, or opt for a plan that includes both. We also drank a bit of koicha, which was not only darker, but had a considerably deeper flavor. Despite being rich in taste, it was not bitter.

If you are unsure which kind of tea to choose, or if you have never tried green tea before, Waraku-An recommends usucha as an the more easy-to-drink matcha. However, if you already are a fan of matcha in general, or enjoy deep flavors like espresso or black coffee (like me), I really suggest you go for the koicha, as I’ve found it rare to come across green tea that is as flavorful as the koicha we drank at Waraku-An. 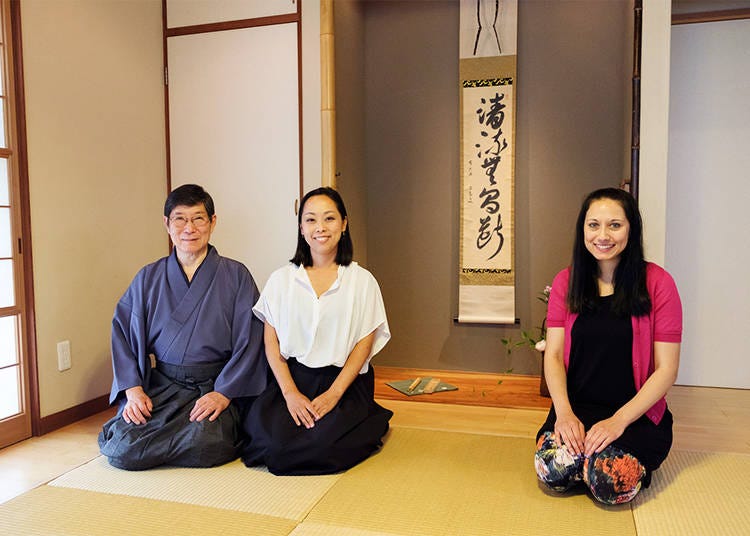 As we gathered up our things and said our goodbyes, Kumiko and I both remarked how incredible the experience had been, even coming from completely different backgrounds. In fact, Waraku-An has become a Tokyo tea house that is enjoyed by Japanese and foreigners alike.

While some may visit as part of their holiday abroad, it’s also an experience that is also enjoyed by locals and has become a popular birthday present or date activity. The charm of this “Delicious, Enjoyable, Beautiful” tea ceremony can be appreciated by just about anyone, regardless of nationality.

While there are a number of rules dictating how to sit, walk, bow, eat, and drink, you should always keep in mind the second word of the Waraku-An motto: “Enjoyable!” Just accept that you will not do everything perfectly. The people who work at the tea house are more than understanding of this and will help you each step of the way, so try not to worry and enjoy each moment of this beautiful and traditional ritual of Japanese culture!