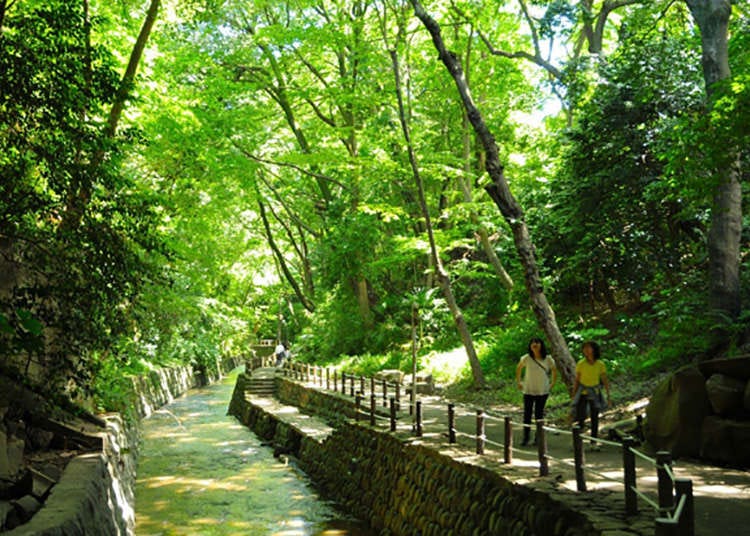 Todoroki Keikoku Ravine is the only ravine in Tokyo's 23 wards and is located right next to popular streets like Futako-Tamagawa and Jiyugaoka. It is hard to believe that this precious place surrounded by nature is in the middle of the city, and is sure to make you see Tokyo in a whole different light! 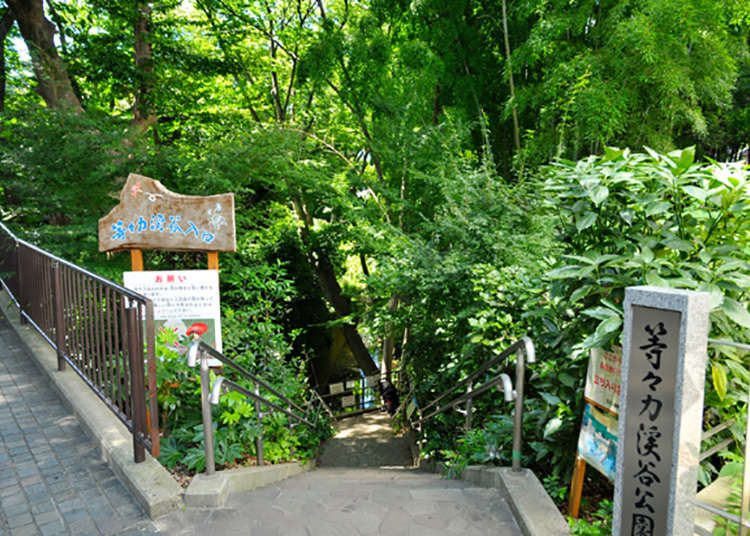 A three-minute walk from the local shopping street, you will find the entrance to the ravine at the side of the Golf Hashi Bridge. The name Golf Hashi Bridge comes from the fact that long ago, there was a large golf course near Todoroki village during the early Showa era. If you go down to Yazawa River, you can see the expanse of green scenery on one side. This ravine was made by the erosion of the surface of Musashino Daichi Plateau. There's also a land formation which you can closely observe near the Golf Hashi Bridge. 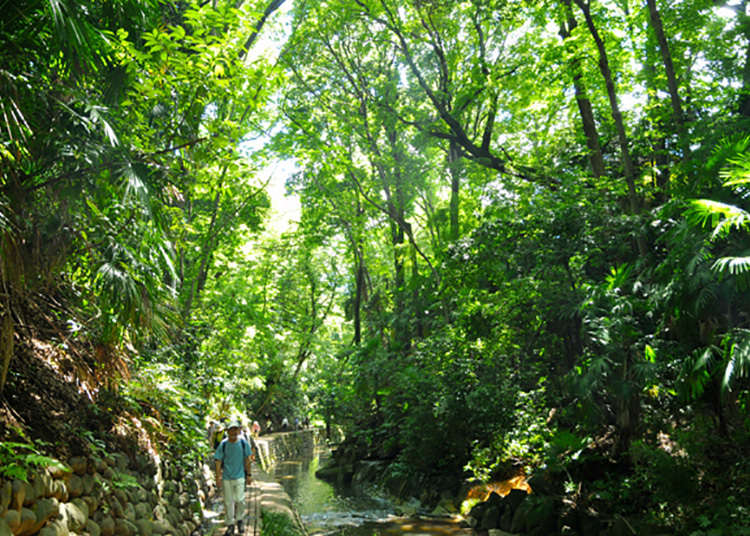 The riverside feels so cool that you'll forget you're in the middle of the city. Along the riverside, oak trees and zelkova trees have grown so tall that they mask the sky, shading the majority of the area. There are more than 30 springs inside the valley, hygrophytes scattered all around them. With the forest on the slope of the cliff and the mountain stream, you really get to appreciate the beauty of nature. 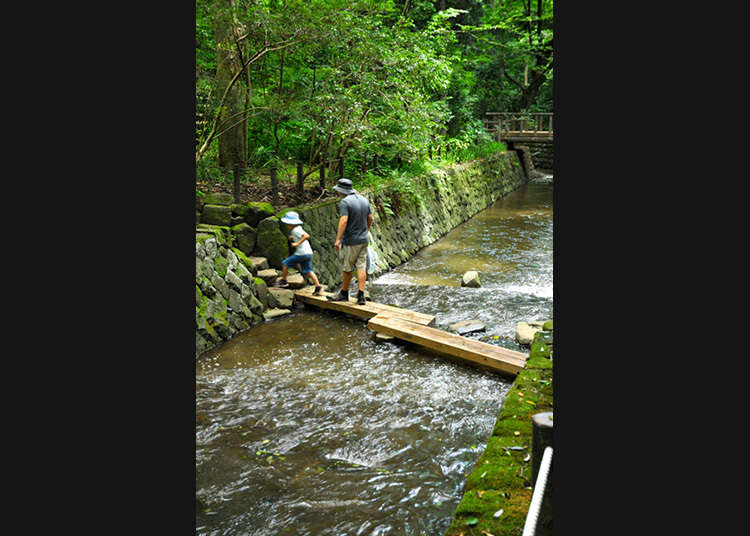 The serenity of the place that is an unbelievably short walk away from the highway and its small river stream are both very relaxing. Despite its closeness to streets and highways, Todoroki Valley is tranquil and you can even touch the river's surface, getting even closer to nature. Then, move on to the Todoroki Keikoku Sango Yokoana (cave No. 3 at Todoroki Keikoku) at the end of the road. An ancient tomb called a kofun can be found there. If you go through the Kawamo-no-hashi (river surface bridge, also called a park bridge), you'll notice how shaded and cool the place really is. 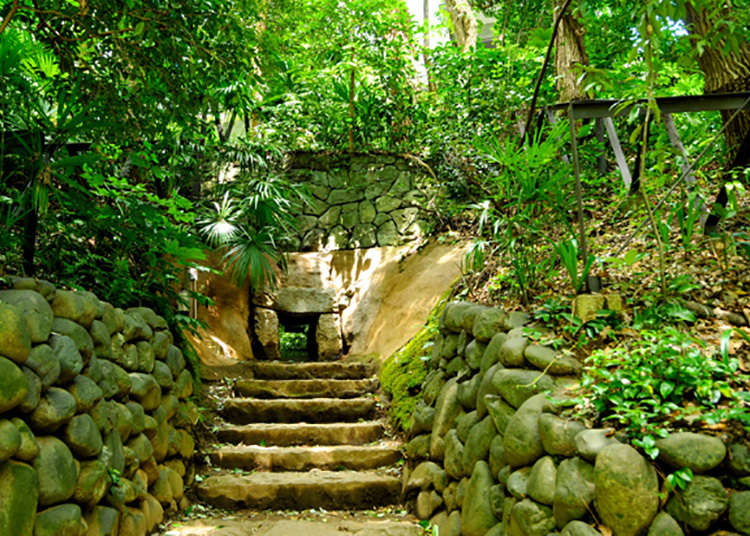 Sango Yokoana (cave No. 3) is one of the designated historical landmarks by Tokyo. This tunnel was considered to be built between the end of the Kofun period and the Nara period as the tomb of an unknown, influential person. It does not look much from the outside, but the inside looks like a decanter cut in half. There are wetlands near the tunnel, as well as a little open space with a bathroom where you can take a rest. 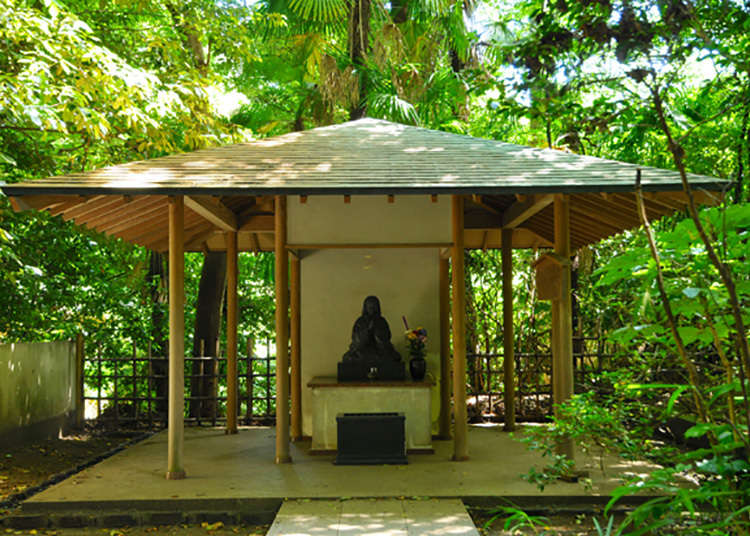 If you proceed further along the river, you will see a small temple called Chigo Daishi-do at the right-hand side. Chigo Daishi is the childhood name of Kobo Daishi, a great Buddhist preacher who had a strong impact on Buddhism in Japan. According to the stone monument, this temple was built in celebration of the 1200th anniversary of the birth of Kobo Daishi. 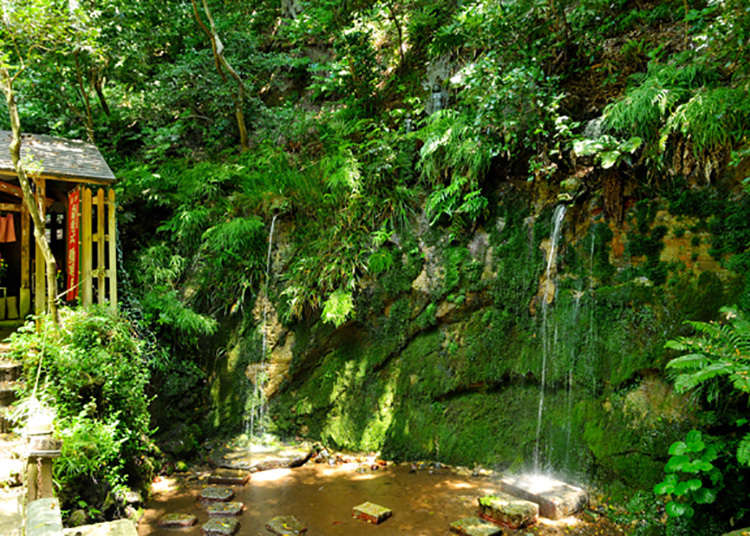 The origin of the name "Todoroki" was taken from the "roaring" sound, called “todoroki” in Japanese, of the Fudou-no-taki falls. Currently, there still are people standing under the waterfall for ascetic practices, and no one but such people alone is allowed to enter. 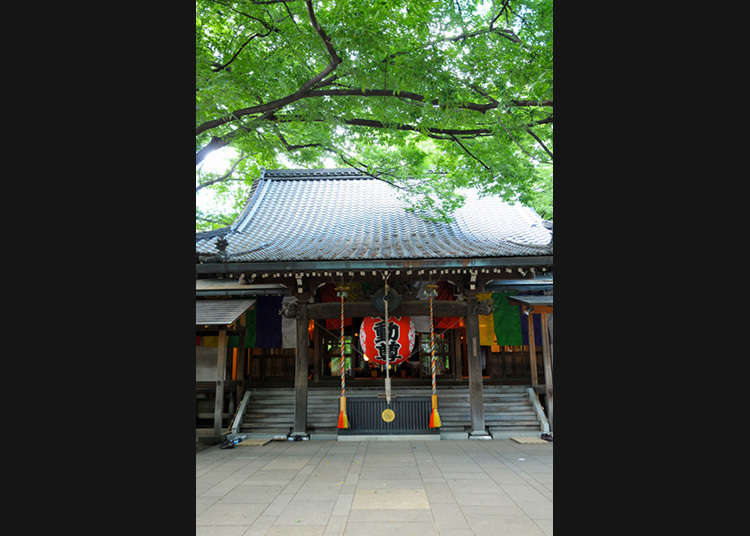 From here, relatively steep stairs continue to Todoroki Fudoson. Be sure to try to drop by here for a little. Todoroki Fudoson was founded by Kogyo-Daishi from the Shingon sect. It's also known for its beautiful Japanese cherry blossoms during spring. In autumn, the entire scenery is dipped in beautiful gold and red. 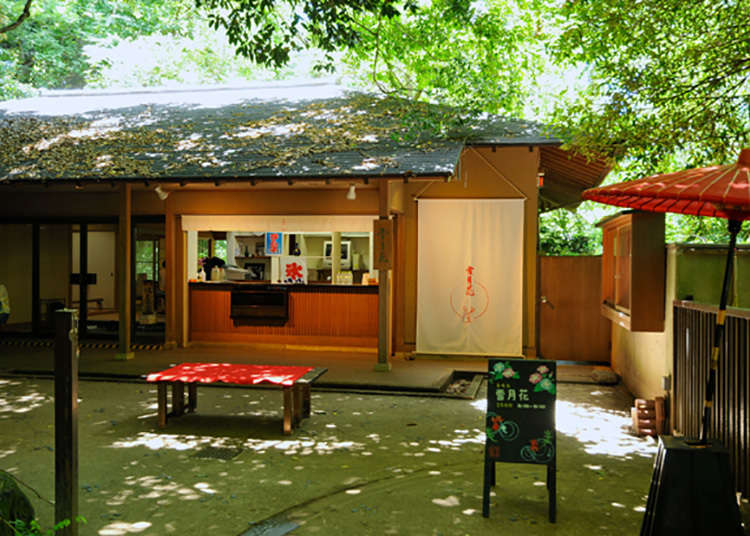 About one kilometer from the starting point, there's a cafe called Setsugekka where you can take a rest. 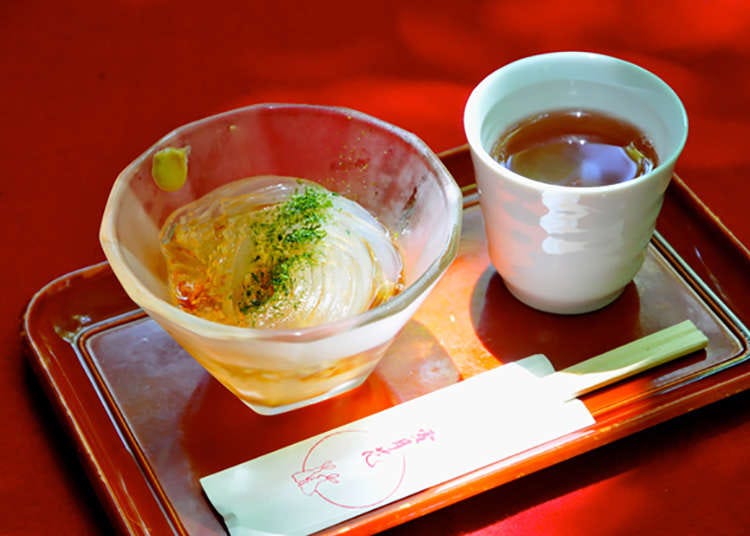 There's an area for eating outside the store, so if the weather is nice, why not sit outside? Keep in mind, though, that Setsugekka is closed early in the morning. From the cafe, climb down the ravine once again and go further downstream. There is a Japanese garden at the right-hand side, which we will properly look at later, and climb up the stairway by the garden to drop by the Noge Otsuka Kofun (an old burial mound) about 500 meters ahead. 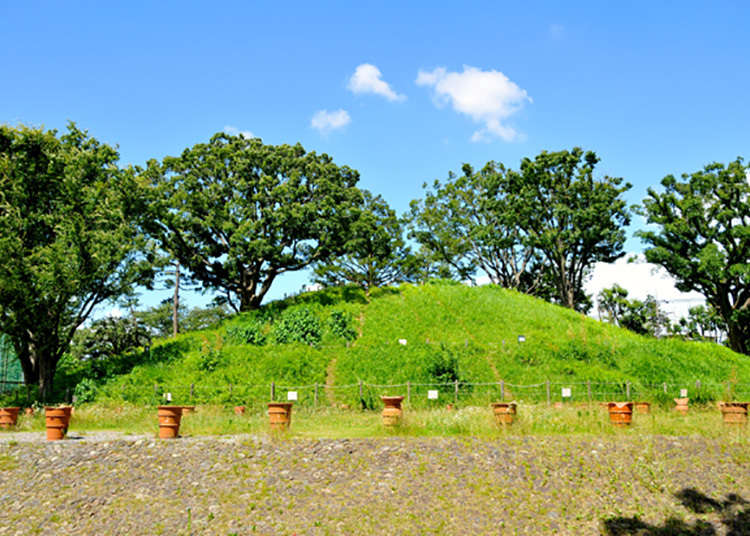 Noge Otsuka Kofun is a large burial mound which was built at the beginning of the 5th century. Looking at it from above, its shape resembles a Japanese scallop. The brown pots that surround the mound are earthenware called haniwa (terracotta clay figures used in rituals) and hajiki (unglazed Japanese earthenware), made by the ancient Japanese people. This tomb is thought to be the burial site of a head of a powerful clan in southern Musashi area, and its overall length is 104 meters. Burial items such as fine armor were also found at this site. The haniwa and hajiki shown at the kofun now are not in the same look when they were made but rather have been restored. 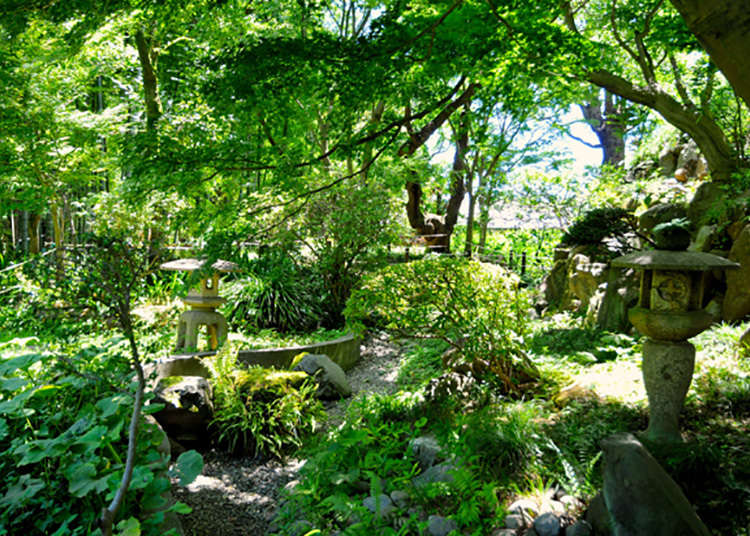 The Japanese garden is small but still a calm, tranquil place. Let's have lunch in the shoin, a type of audience hall above the garden. Especially when the weather is nice, you might end up sitting there for a long while to simply take in the sights and sounds of nature. Being a place near the middle of the city and with its relaxing small stream and lush green, Todoroki Keikoku Ravine is the perfect spot for casual visits. You can freely come here without equipping yourself for mountain climbing, so do not miss the opportunity to visit the city's precious nature spot.