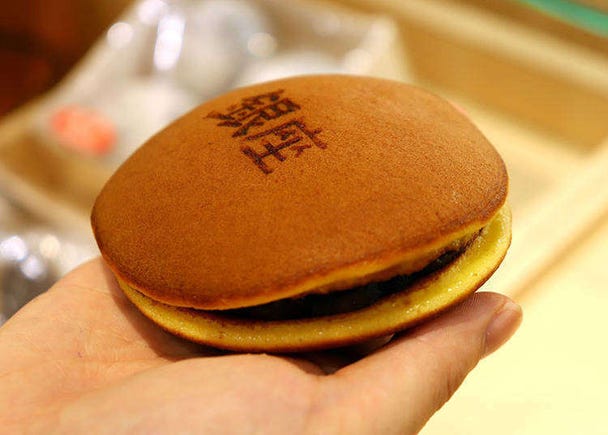 The iconic Matsuya Ginza is Ginza's oldest departmental store the only one with its main branch located there. The building's unique design has turned it into one of the most recognizable faces of Ginza internationally. This popular department store contains a collection of shops and brand boutiques carefully chosen to show off the Ginza vibe.

We're going to introduce you to five souvenirs that come highly recommended by the Matsuya Ginza PR department as well as regular shoppers. Most of them can only be bought in a Matsuya store or at Matsuya Ginza itself, and since they'll make excellent Japanese souvenirs as well, we're confident you won't regret checking them out! 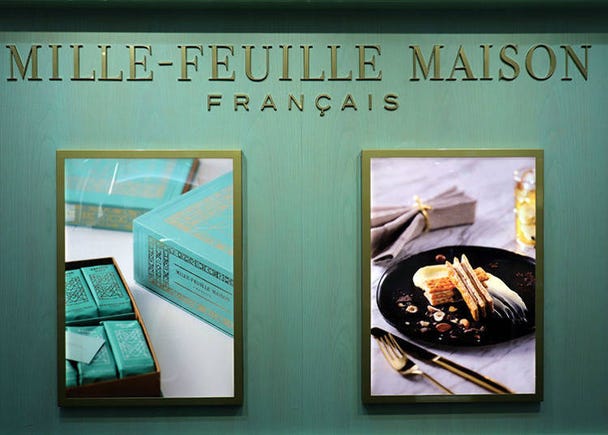 Mille-Feuille Maison Francais is a mille-feuille specialty store with a strong focus on feuilletage (layered pie crust), and since the only store in the world is located in Ginza Matsuya, it means you can only get this delicious pastry here! 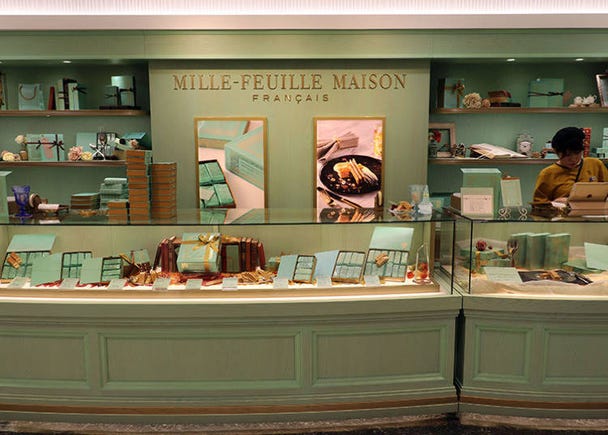 Using ingredients that have been well-researched, taste-tested, carefully formulated, and beautifully layered to appeal to the senses, you can really see why this "modern mille-feuille" is so popular with people of all ages. Besides their standard offerings, the shop also comes up with exciting new seasonal products of different flavors from time to time. 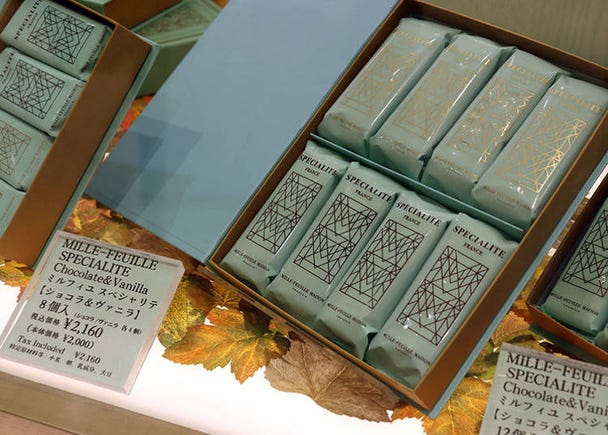 Our recommendation is the "Mille-Feuille Specialty" that goes for 2,160 yen (tax included) for a pack of eight. This is a regular Mille-Feuille Maison product that's made up of meticulously prepared crunchy crust and creamy filling. 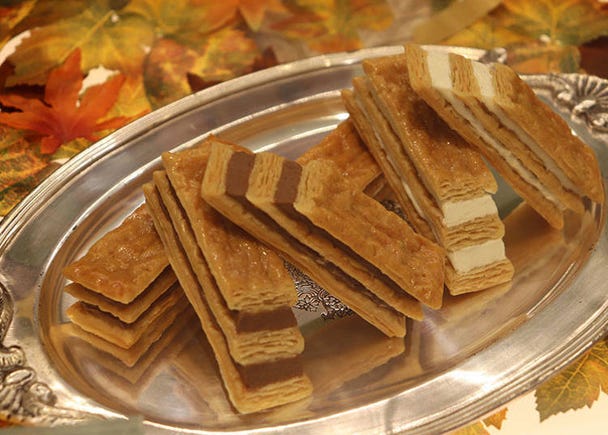 There are two types of cream fillings to choose from for "Mille-Feuille Specialty". Pick whether you want your mille-feuille to have chocolate or vanilla sandwiched between the feuilletage (flakey pastry puff), which was made using French wheat and goes exquisitely well with both smooth and aromatic cream fillings! 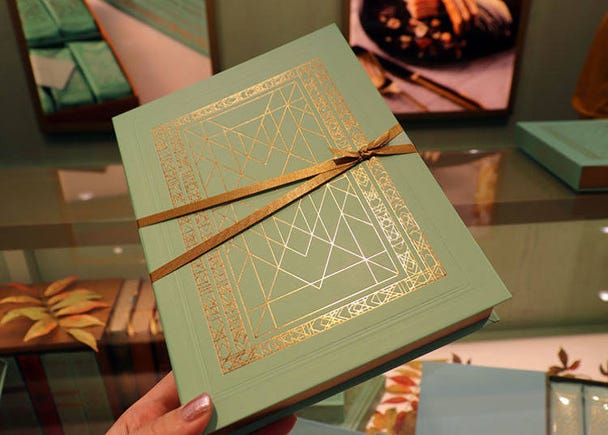 Even the packaging is a visual delight. Designed to resemble a western-style book, the beautiful box is popularly bought to be given as a gift. In fact, it made it to the list of "Souvenirs for Hospitality 2018" compiled by surveying those currently working as secretaries - a completely understandable accomplishment, considering the thoughtful effort that clearly went into its tasteful design! 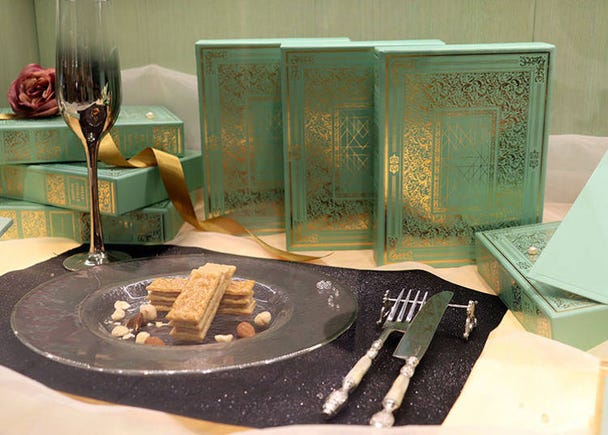 On special days when you feel like enjoying something a little more luxurious, try the "Mille-Feuille la Ginza" which goes for 3,240 yen (tax included) for a pack of eight.

Certified as an AOP product, which is an accreditation given only to a few regions of France and shops that strictly adhere to traditional French baking methods, this opulent feuilletage has been carefully prepared with pamplie butter. On top of that, the pastry is sandwiched with praline cream made of aromatic hazelnuts and almonds. The sweet scent of butter and thick cream fills your senses with every delectable bite. 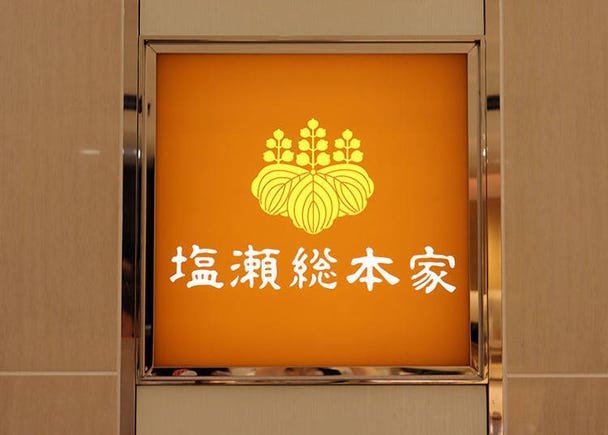 Shiose Souhonke is an old-time manju store said to be where the classic stuffed bun originated in Japan. The shop has more than 660 years of history under its belt! Jingyin Lin, the founder of Shiose, came to Japan from China in 1349 and started making buns stuffed with filling, or manju, for the first time in Japan.

His descendent, Shaoban, later learned how to make imperial sweets in China. Upon his return to Japan, he started selling "Yam Manju" by adding yam paste into the manju filling based on what he had learned in China. This became the base for a special manju filling recipe that continues to be passed down within Shiose to this day. 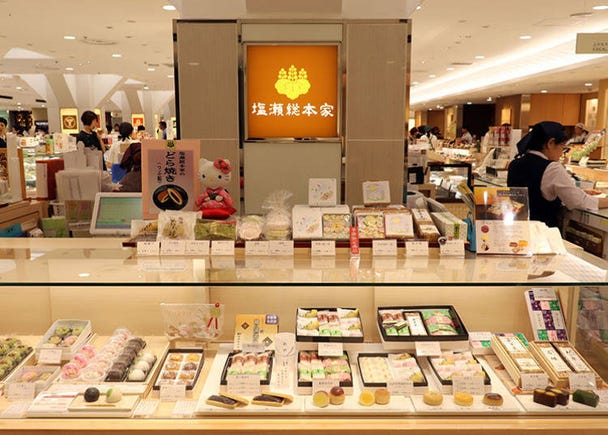 During the Sengoku period (1467 CE to 1600 CE), Shiose Souhonke continued to be loved and patronized by feudal lords like Oda Nobunaga, Akechi Mitsuhide, Toyomi Hideyoshi, and the Tokugawa family, just to name a few.

Over 660 years has passed since this shop was first established, and its traditional manju taste is still telling us the story of the skill and hard work of many a professional sweets artisan throughout the ages, both in the selection of ingredients and the appealing design of the snack itself. 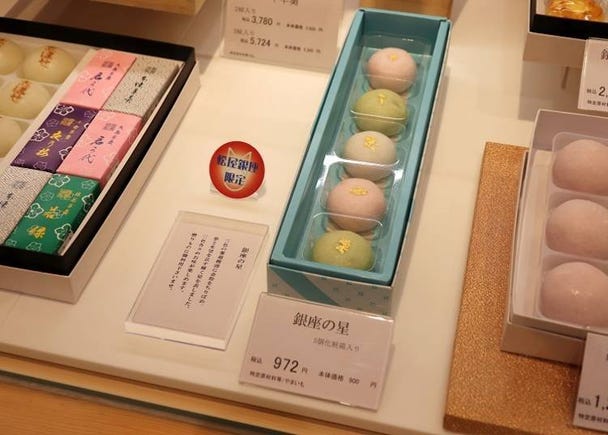 Our recommendation is the "Ginza no Hoshi" pack that contains five manju for 972 yen (tax included). This is an item exclusive to the Matsuya Ginza branch that refreshes the tried-and-tested traditional snack "Ginhouka" by adding a smattering of gold flakes on top to give it a vibrant finish. 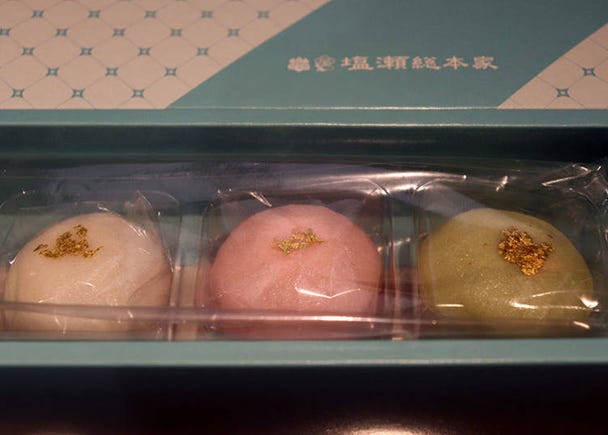 The sparkling gold on the tricolor sweet potato manju is meant to depict the stars that we wish upon for our hopes and dreams. Each auspiciously colored manju is also a different flavor from the other. The exquisite red bean paste stuffing is wrapped in yam skin, making it a simple yet attractive product with a unique Japanese flair.

3) Dorayaki at Seigetsudo branded with a "Ginza" seal - the perfect I've-been-to-Ginza souvenir! 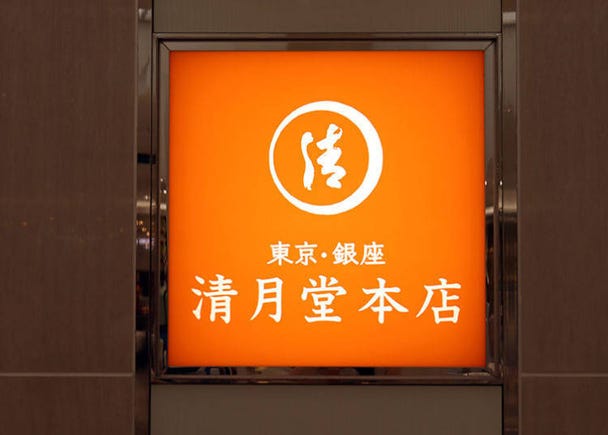 Seigetsudo Honten is a Japanese confectionary shop that chose to put its main branch in Ginza, much like Matsuya. This longtime shop has been in business since 1907.

Despite having more than 100 years of history in Ginza, Seigetsudo has nevertheless not forgotten the principles it stuck by when it was first established: That each generation would create unique sweets different from their predecessors, and that they would regale customers with seasonal sweets based on each of the four seasons. These principles are really the secret behind the popularity of their carefully crafted snacks among people from all age groups and generations. 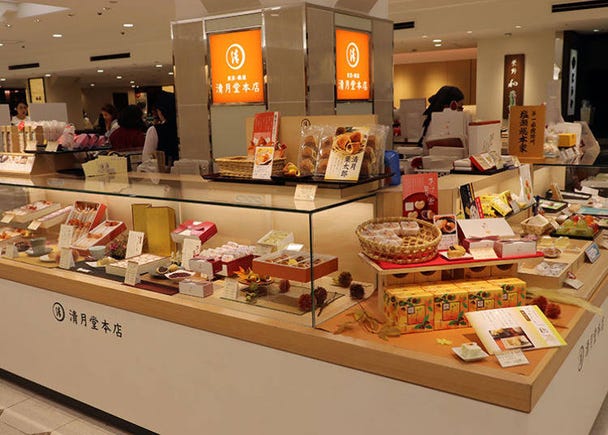 Inside the shop, you'll find a slew of specialty sweets like the "Otoshibun" created by the third owner, or the "Yomonomine" snack created by the fourth. All pastries are made from classic ingredients that are known to promote good health, such as Hokkaido red beans, fresh eggs from Iwate's contract farmers, and wasabon fine-grain sugar from Tokushima. 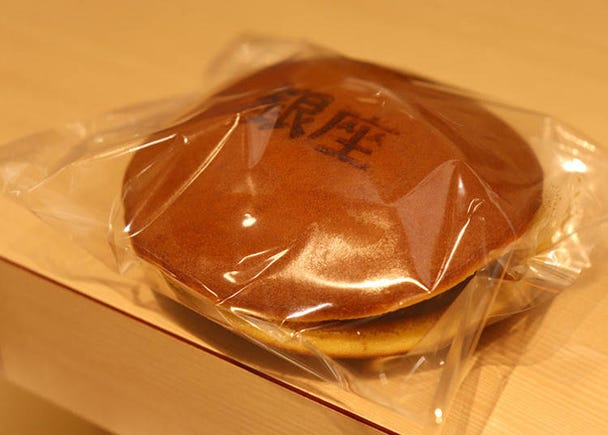 The shop's "Dorayaki (220 yen, tax excluded)" has got to be our most highly recommended item. The traditional Japanese pastry is stamped with the Chinese kanji characters for "Ginza", making it the perfect I've-been-to-Ginza! souvenir to bring home with you. 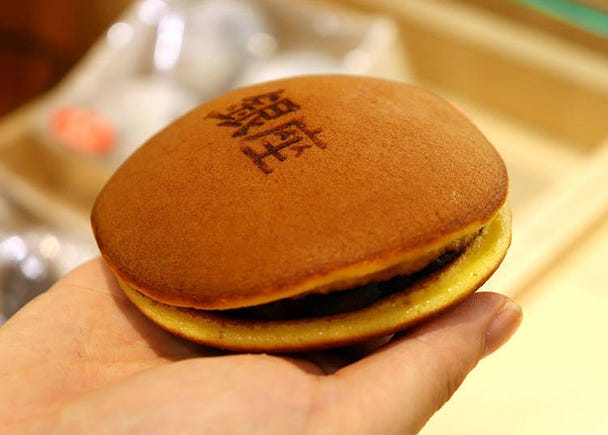 Slightly larger than the size of an adult's palm, the dorayaki's fluffy dough goes wonderfully well with its red bean paste filling. Although the snack can be kept until the next day if need be, it's best to consume it within the day itself for optimal flavor and freshness. Ginza is full of other old-time Japanese sweets shops selling dorayaki as well, but Seigetsudo Honten's dorayaki is still our top pick for those wanting to fully enjoy the Ginza vibe, since this tasty treat is an exclusive product of the store's Ginza main branch!

4) Financierie Caramel Sale at Ambigram is the new kid on the block! 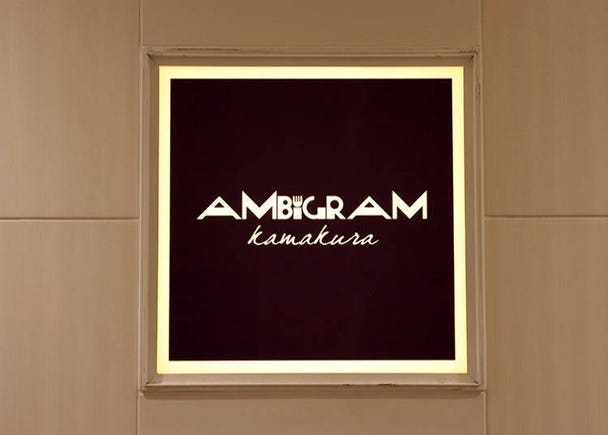 Ambigram opened at Matsuya Ginza recently in the year 2018 and is the satellite shop of a pastry cafe originally located in Kamakura. Kazuaki Izawa, the owner and chef's beautiful and lovely cakes are popular with virtually everyone. 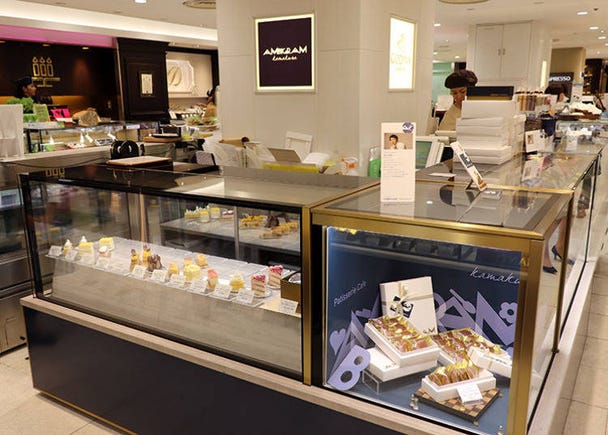 The concept behind Ambigram Kamakura is basically French sweets with an Italian essence and Japanese flavor, and the only way you can experience something like that in Tokyo is in this shop. Check out the rows of colorful cakes on display in the showcase! 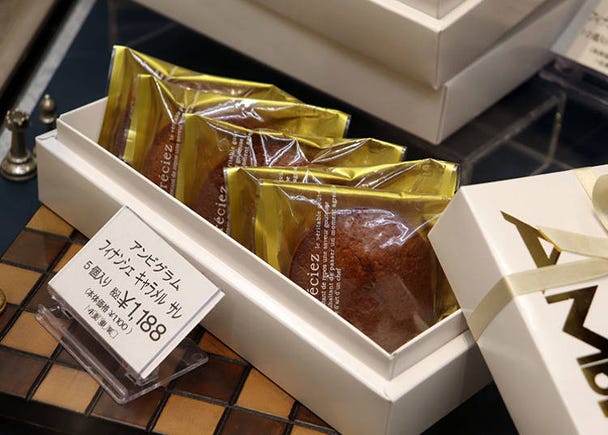 The item we especially recommend is a new product exclusive to Matsuya Ginza called "Financierie Caramel Sale" that goes for 1,100 yen (tax excluded) for a pack of five. This is probably the first completely brand-new product being featured in an article about recommended Matsuya Ginza goods! 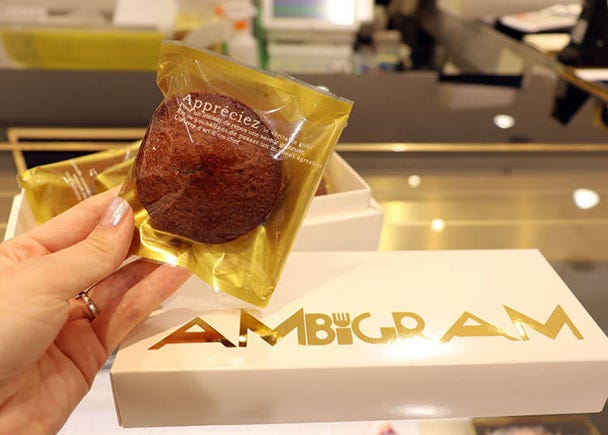 The stylish packaging is embossed with gold foil and designed to look like an old-style cosmetic box. Inside, each snack comes individually wrapped and will melt in your mouth into a fragrant mix of salty caramel flavors. If you're not careful, you might even get addicted to the lovely taste! Highly sought-after from the moment they went on sale, we recommend that you grab a box or two of this popular product if you happen to see them in the store, or you just might miss it! 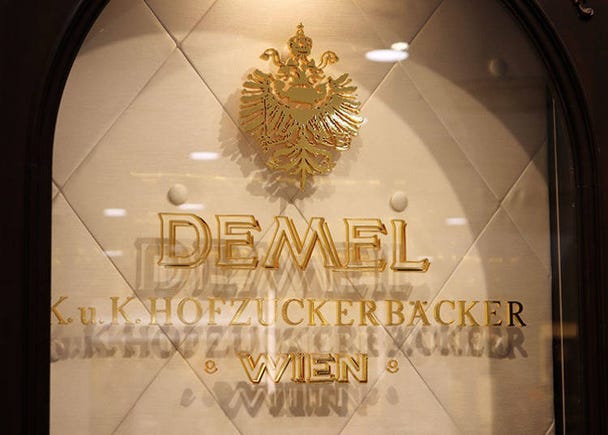 Demel is a top of the line premium Western confectionery shop that is one of the symbols of the ancient city of Vienna in Austria. With a history of about 220 years, the brand is well-known as a reputable shop serving quality pastries deemed good enough for Vienna royalty. The shop continues to use the coat of arms of the noble House of Habsburg, which conquered the Holy Roman Empire, as its logo. Many international visitors are likely familiar with this mark! 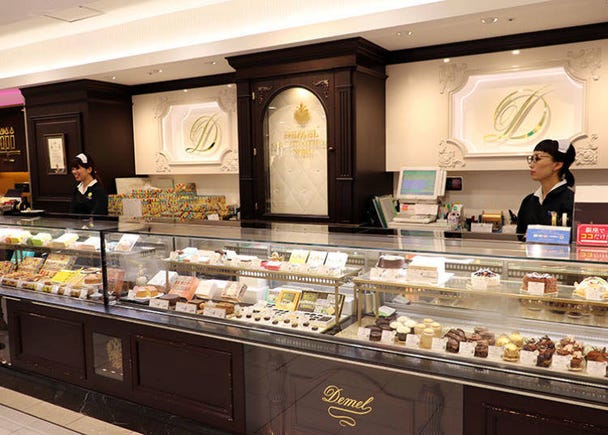 Demel has a Japanese branch in the basement of Matsuya Ginza. The abundance of beautiful and elegant-looking cakes being displayed tastefully in the shop's showcases give a stylish welcome to any who walk into the store. 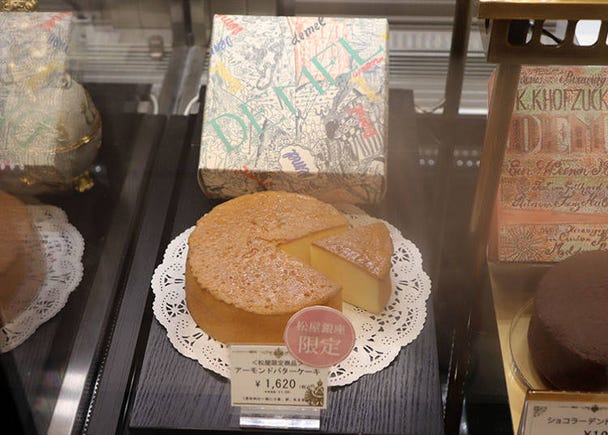 Demel is probably most well-known for its chocolate cakes, but they also have an "Almond Butter Cake (1,500 yen, tax excluded)" offering that can only be found in their Matsuya Ginza branch! The packaging that comes with it has the Demel name stamped prominently on top, making its presence strongly felt despite its simplicity. 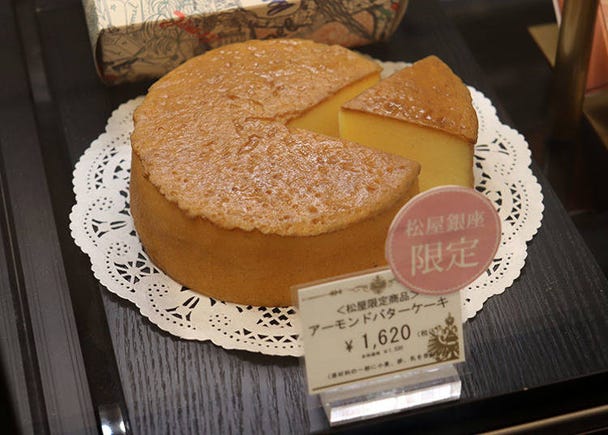 The cake itself is made with a generous amount of almonds and fresh butter that spread out slowly and gently within your mouth. Coupled with a firm texture made from chewy dough, it's like tasting a little piece of heaven with every bite! If you have any preconceived ideas that Demel only does good chocolate pastries or sachertorte, this delightful cake will divest you of that notion very quickly. Since this exquisite confectionery is only available in Matsuya Ginza, don't miss your chance to try it out if you're in the area!

The products featured in this article can all be found in the basement one of Matsuya Ginza, which is directly connected to exit A12 of Ginza Station on the Tokyo Metro Line, making it an ideal spot to consider for your souvenir shopping, since you'll be protected from any sort of inclement weather all the way from the station to the doors of the department store. You definitely won't regret dropping by for a bit!