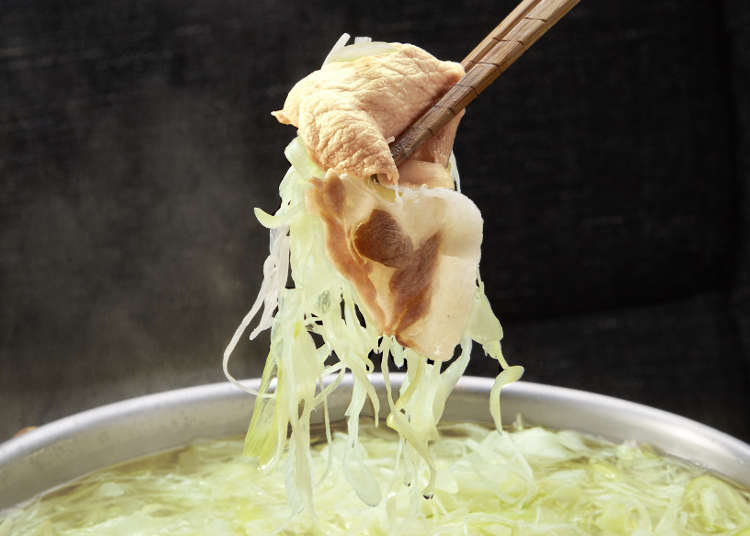 Are you looking to expand your Japanese gourmet knowledge beyond standard dishes like sushi, tempura, or ramen? Join us for juicy shabu-shabu, a Japanese fondue or hot pot that will become one of your Japanese food favorites. Popular all year round, shabu-shabu consists of thinly sliced pork or beef that you boil yourself in a savory broth, right at your table.
A particularly delicious shabu-shabu dish can be enjoyed at Rabu Ginza Glasse, an atmospheric restaurant that specializes in “kurobuta,” known in the West as Berkshire pork. This rare pig breed makes for an incredibly juicy, savory slice of meat, and Rabu Ginza Glasse serves its kurobuta shabu-shabu for incredibly reasonable prices.

Making shabu-shabu is easy: you put a pot on a flame, let it boil, and drag your meat slices through the boiling soup - the sound that the chopsticks make on the bottom of the pot sound like shabu, shabu. This quick boil gets rid of excess fat, so shabu-shabu isn’t just really healthy, but you can eat plenty of meat and vegetables to your heart’s desire without feeling full.
But what makes such a simple dish so special? The choice of the ingredients, the composition of the soup, and the dipping sauce, of course. So what does Rabu Ginza Glass’ famous kurobuta shabu-shabu taste like? We asked the restaurant’s manager, Mr. Kunikatsu Seto. 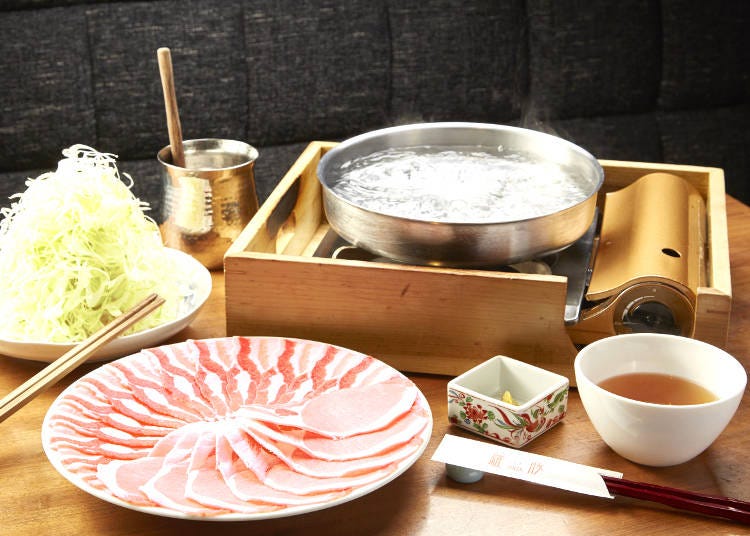 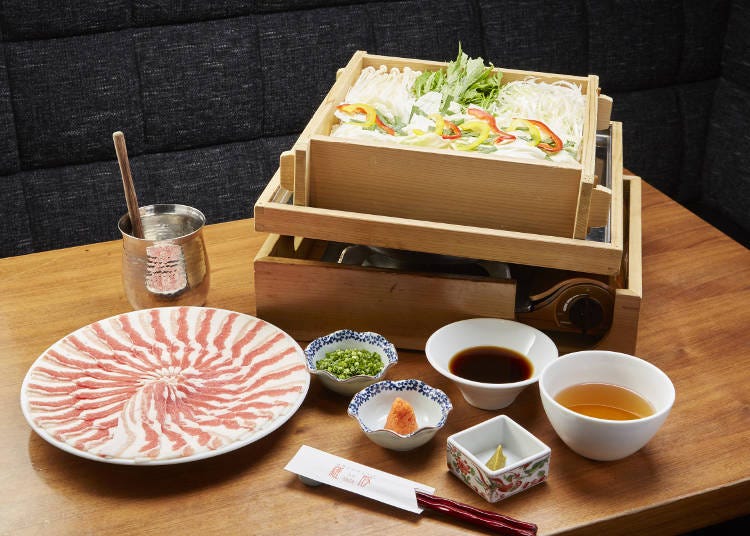 “The most popular dish on our menu is the all-you-can-eat kurobuta shabu-shabu for 3,586 yen (tax included, 2 hours), available on weekends and national holidays only. We have a few of those available on weekdays as well, but they’re not on the regular menu and are somewhat of an insider-knowledge order. Besides that, the “seiromushi” for 1,858 yen (from 2 people) is popular – plenty of meat and vegetables steamed in a basket. The meat for this seiro dish is Miyazaki Prefecture’s Kirishima kurobuta, a fatty, sweet pork that is very delicious. For seiro, we use short ribs, while we use both short ribs and roast for shabu-shabu. A lot of people ask for beef, but we absolutely urge you to try the pork.”

Rabu Gina Glass also serves plenty of green onion alongside their premium pork – a thing that’s fairly uncommon when it comes to shabu-shabu. Garlic gives the soup a wonderful aroma. We highly recommend eating the savory pork together with the crunchy, fresh green onions! Another special characteristic of the restaurant’s shabu-shabu is the soba dipping sauce. This light dip and the bonito soup, prepared in four stages, brings out the flavor of the high-grade pork excellently, and you’ll find yourself reaching for another slice over and over again. 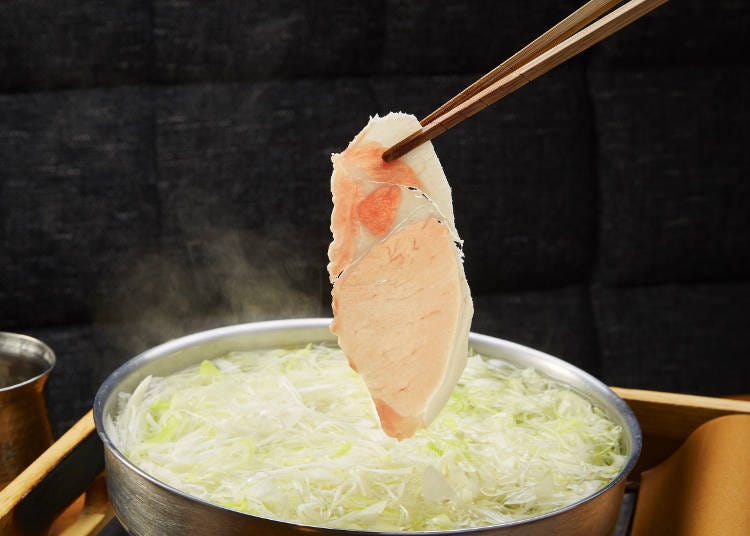 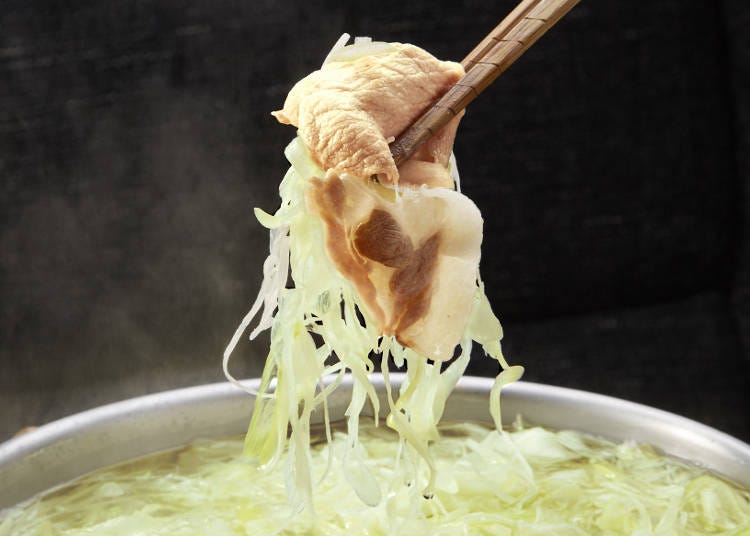 “Some people from outside of Japan might not know how to make and eat shabu-shabu, but we sincerely hope that they will still want to try it. At our restaurant, we will show you how it is done before letting you experience Japanese shabu-shabu for yourself.”

“We serve specially-made soba that are blended from four different kinds of both domestic buckwheat flours and carefully selected buckwheat from overseas. A lot of people want to eat soba after enjoying a drink, and indeed, it is a great combination. Please enjoy our soba together with dipping sauce.”

Next to shabu-shabu, Rabu Ginza Glass also serves delicious sashimi and fried dishes in abundance. Make sure to pay attention to the extensive drink menu as well, and we highly recommend to pair the kurobuta shabu-shabu with shochu from Kyushu. Starting with craft beer from all over Japan, over 130 kinds of spirits can be savored at Rabu Ginza Glass, including many highball and wine varieties.

Recently, the restaurant and its premium pork have attracted a lot of attention from international visits as well, and an English menu, as well as multilingual staff, is readily available to answer your cravings and questions. The entire restaurant is smoke-free, so you don’t have to worry about unpleasant smells ruining your Japanese dining experience either. (A smoking space is provided next to the cash register, so don’t worry about having to hold back if you’re a smoker!) 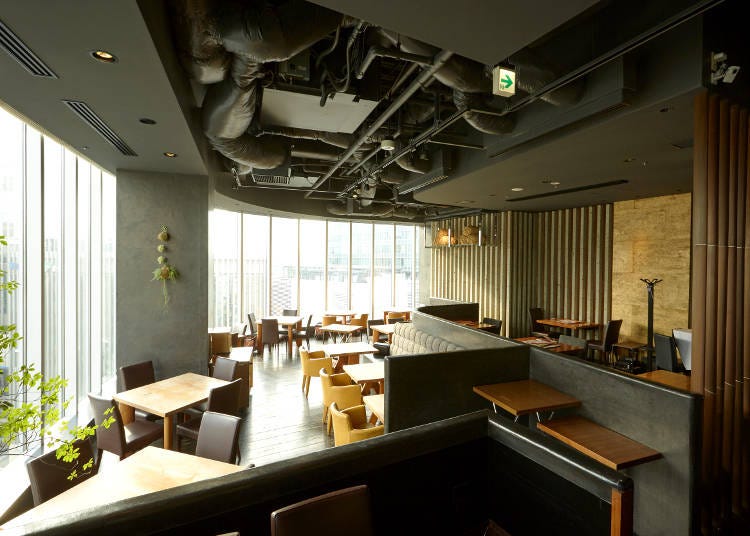 Rabu Ginza Glass is located on the 10th floor of a building and its broad windows offer an amazing view over glitzy Ginza. You’ll even be able to watch Japan’s famous bullet trains pass by underneath as the premium pork melts on your tongue. We especially recommend visiting Rabu Ginza Glass in the evening – exquisite food and an equally exquisite atmosphere will make for a memorable night in Tokyo.
As you can imagine, this shabu-shabu restaurant is a popular place, so a reservation for dinner is strongly recommended.