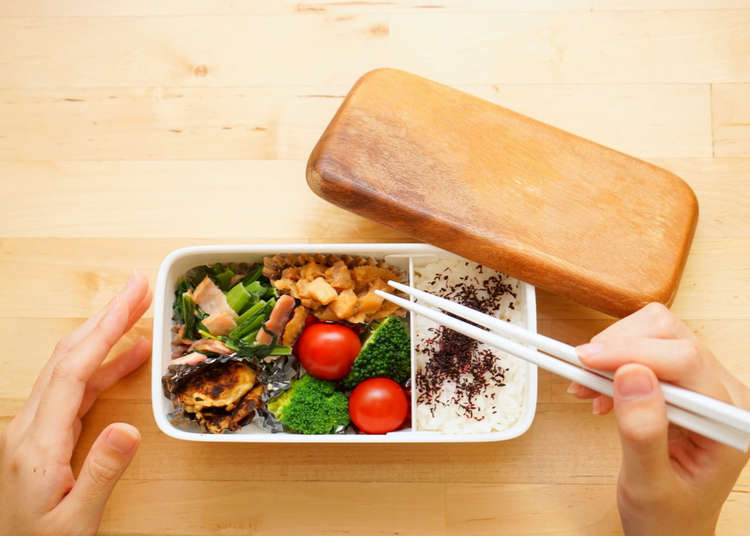 How to Make Bento for Beginners: 3 Big Rules and Easy Tips & Tricks! (Video)

Bento boxes have become almost as famous as sushi and ramen, gaining a reputation as a healthy lunch on the go that is packed with nutrients, properly balanced, and colorful to look at. The task of making your very own bento may seem daunting at first – they look so great, it surely takes a lot of time and effort! However, that doesn’t have to be the case. Everyone can make their very own bento creation by following a few basic guidelines that turn your on-the-go lunch into a bento box!

We won’t be making a fancy-looking kyaraben (character bento) today. Instead, we broke the art of Japanese bento boxes down into three big rules that are surprisingly simple – like lunchboxes for adults. Let’s get cooking!

1. It has to be tasty and filling. 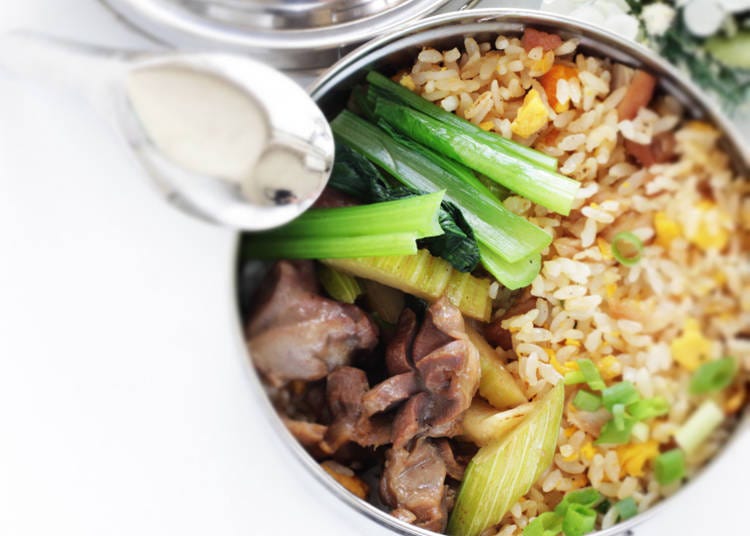 While this one sounds like a given, a lot of people fall into the trap of forgetting about this very basic rule while trying to make a well-balanced, appetizing, and authentic bento. First of all, think about what you like to eat. Are you a meat person who cannot go a day without a serving of pork, beef, or poultry? Do you like diversity in your food and enjoy a different dish every day? Or are you all about flavorful veggies? Even if you now shrug and think “all of that sounds pretty good,” that just means that you have plenty of ingredients to work with! Go with your gut and focus on what you love to eat – and that also means that the ingredients don’t have to be Japanese.

Another thing that only you can judge is how much you actually eat. A dollop of rice, three beans, two mini tomatoes, and an orange slice may look very appetizing when properly arranged, but big eaters will inevitably crave for seconds. Bento boxes are tightly packed, so don’t hesitate to use all the space you have! A bento is supposed to give you energies for the whole rest of the day, after all.

2. Use the right food – that means cold, boiled, and packable. 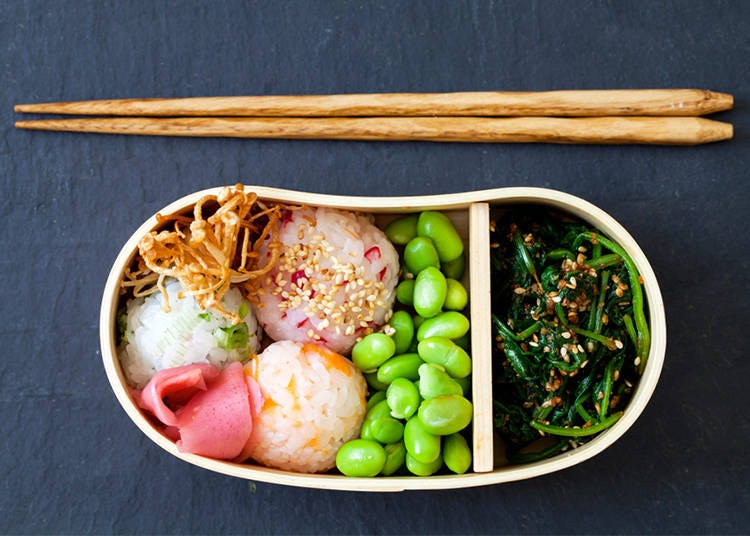 The whole point of a bento box is to be carried around for a couple of hours before savored to recharge your energies. That means that the food inside needs to withstand room temperatures while keeping its shape. An important rule of thumb is to use cold food only (disregarding things such as stews and soups which require a thermal container), as warmth encourages the bad kind of bacteria to grow inside your lunch. Also, some things tend to get runny as they cool down or their heat affects other things you’re packing. That also means staying away from foods that are too moist or those that need to be cooled, such as mayonnaise.
That doesn’t mean that anything remotely moist is out of the question. In Japan, vegetables such as carrots or burdock root are often simmered in soy sauce or pickled to prevent them from spoiling, while broccoli is often packed after being boiled with a bit of salt. Such sides that have a bit of moisture are put in silicone or plastic cups to not run into all the other bento ingredients.

Important: especially raw fish is a big no-no. Looking for pictures of bento boxes, you’ll often come across creations that feature sashimi or sushi. Keep in mind that those kinds of bento are not intended to be carried around for half a day or longer! Raw fish spoils quickly and should only be used if you intend to eat your bento basically right after making it.

About packable food
As already mentioned, bento boxes should include stir-fried, boiled, cooked, or vinegared foods. These methods are a great way of prolonging the shelf life of food that would usually not withstand sitting in a box at room temperature for a few hours. Vinegared carrot salad, fried chicken, and hard-boiled eggs are classic choices for bento boxes in Japan and should give you an idea of how to make your favorites packable.

About rice and carbs
Rice is a moist food and thus can spoil rather quickly. While a bento can easily be made from leftovers prepared the evening before, rice should be either freshly made in the morning or frozen. On hot days, use the traditional Japanese method of adding vinegar to your rice (just like sushi!) to keep it from spoiling, or salt it and shape it into classic rice balls.

Other carbs are surprisingly great bento choices. Pasta, for example, will keep for a rather long while if your sauce is not dairy-based, and grains such as brown rice, quinoa, and millet are also great choices when packed tight and stored properly before being out in the bento. 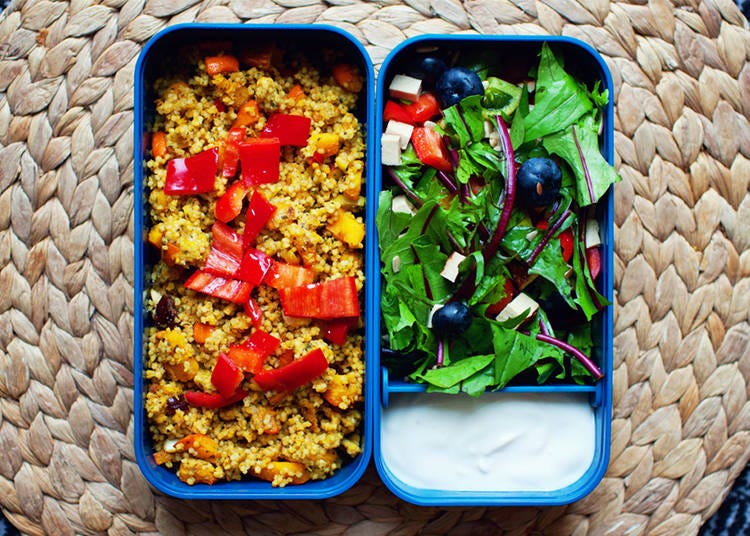 A rich mix of colors, textures, and flavors achieved with only two different dishes.

The word “balance” is tightly connected to the concept of bento. Indeed, it affects every aspect of the box: balance of colors, balance of texture, balance of cooking styles, balance of ingredients, and so on. Let’s go through a couple of key things that need to be balanced.

Ingredients
For traditional Japanese bento boxes, the balance starts with 50% carbs vs. 50% proteins, vegetables, and other sides. You can follow that, but as mentioned earlier, you’re the chef of your bento and don’t have to use any carbs if you don’t want to. The most important rule is to not have too much of one thing but instead bringing balance to your food with a variety of different dishes.

Color
Bento boxes look so fancy and appealing for a reason. You’ll notice that they always feature a variety of colors such as red, green, white, and yellow. A common issue that people tend to run into is too much brown – a lot of dishes look brown after cooking, so this is the main color you will have to balance. The bento example above actually is already balanced, and you will notice that simple ingredients such as bell peppers, mini tomatoes, broccoli, beans, asparagus, or a boiled egg already bring all sorts of vivid colors to your box. As mentioned earlier, simply boil them with a bit of salt or fry them briefly with a bit of vinegar. All done!

How to Make a Bento: Tips & Tricks 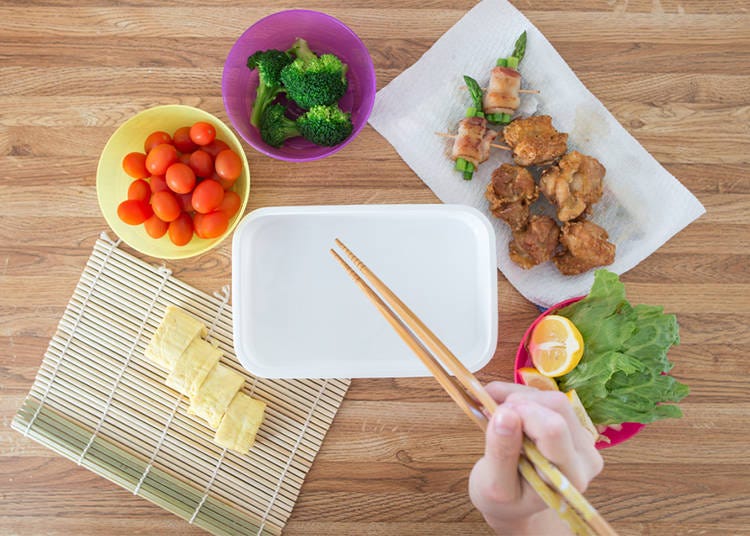 Following these three very basic rules of bento making will leave you with a well-balanced and healthy meal of your own personal taste. Skill comes with practice and don’t hesitate by starting your bento adventure as simple as possible. To help you kickstart your bento skills, here are some extra tips and tricks:

Don’t get too hung up on the box.
Traditionally, Japanese bento boxes have compartments, usually at least two to separate rice from the rest. While such compartments are certainly helpful to keep your ingredients separated, preventing rice from getting mushy or flavors from mixing too much, you don’t have to go out of your way to find such a Japanese-style box. If you don’t mind a bit of discoloring here and there, use whatever lunch box you like, especially as a bento beginner.

Pack it tightly.
In a bento box, every centimeter of space should be filled with something. That’s because the box may tumble around in your bag a bit and you don’t want to open it during lunch and find everything mixed together. Fill little gaps with sturdy foods – mini tomatoes are an excellent example of that, but a chicken nugget will also get the job done.

Pack it 3D.
Unlike a plate where everything spreads out in a rather flat way, you need to think 3D for bento boxes. That means building upward and can require placing foods on top of one another. For dry foods, that is not an issue, but moist foods should be contained in a silicone form or with some separator of sorts (even aluminum foil will do).

Precook as much as possible.
Precooking is what makes bento boxes quick and simple to put together in the morning. Simply make a bit more of whatever you’re having for dinner. Things such as carrot salad and boiled eggs keep for a while in the fridge as well. The only thing that is best added fresh is rice, which is just as quickly made if you have a rice cooker. Or just go for another carb of your choice!

Remember that a bento box is cold.
Generally, bento boxes are not microwaved but enjoyed cold (or rather at room temperature). It’s important that whatever you’re making for your box should taste good once it has cooled down.

Add some lemon slices.
Lemon doesn’t only make your bento box pop with a dash of vivid yellow, it also acts as a refreshing seasoning that goes with almost any dish and helps to preserve your box throughout the day.

Be careful with salt and pepper.
Over-seasoning can have a rather unpleasant effect on your taste balance. With its diverse components, a bento box offers many different flavors which can be easily muddled by a generous use of salt and pepper. 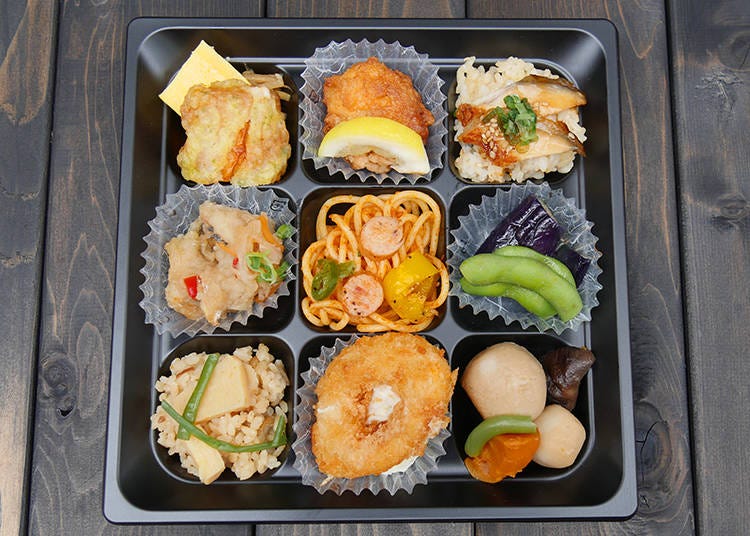 To demonstrate everything we have just talked about, we’ll be taking a closer look at a bento box made by an actual Japanese chef. This is the Isekai Izakaya Nobu Bento Box, inspired by dishes appearing in a recent gourmet anime of the same name. Don’t be shocked – this is not the kind of bento box you need to aspire to make (unless you want to, then by all means!), but it illustrates rather nicely how pretty much any dish can be part of a bento. Here’s what’s in the bento, from top to bottom, left to right:

You see, from pasta to marinated vegetables, anything goes when it comes to bento, as long as it tastes good and can resist room temperatures for half a day. Note that moist foods such as the grilled eggplant, vinegared fish, and potato salad are kept in little plastic forms – the fried chicken doesn’t necessarily need this, but everyone enjoys some symmetry! 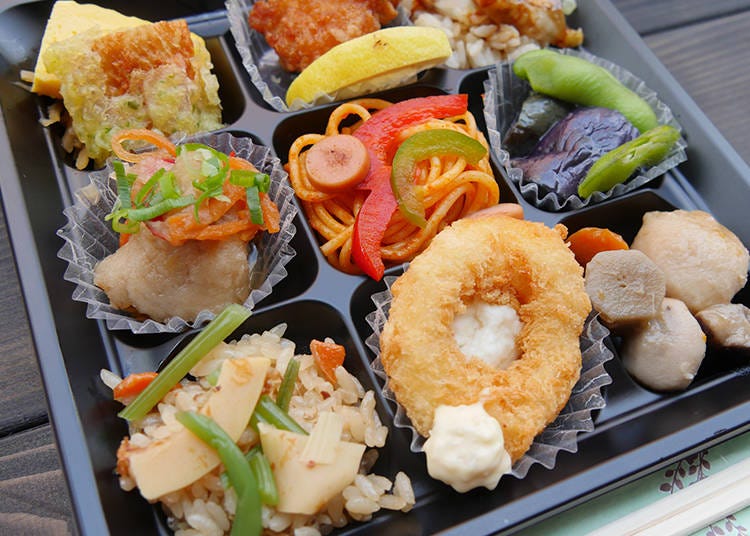 Also, note the different balances. There’s a nice mix of fried, cooked, and marinated, and that alone helps a lot with the balance of texture. Simple things such as green soybeans, the lemon slice, and a piece of cooked carrot add vivid colors with barely any effort. From afar, this chef-made bento seems intimidating, but analyzed dish by dish, it follows the same three basic rules we’ve just talked about above. The arrangement of nine dishes is rich and colorful, but every single one could also be the main ingredient of a bento box in itself or serve as a delicious side. If you’re a pasta person, there’s absolutely nothing wrong with centering your own bento around that.

Got curious about the Isekai Izakaya Nobu Bento? Try it in Asakusa!

By the way: the Isekai Izakaya Nobu Bento shown above is made by the very same chef who told us that the number one rule for bento making is “it’s got to be tasty and filling.” Take it from the pro and cast out any preconceptions you might have about bento making – just follow some simple basics and you’ll end up with your own delicious, healthy lunch box!

The Ins and Outs of Everyone’s Favorite Train Bento
Ootoya Offers an Array of Home-Style Japanese Dishes! Enjoy Authentic Japanese Food at Reasonable Prices
Bento – The Japanese Boxed Lunch
*This information is from the time of this article's publication.
*Prices and options mentioned are subject to change.
*Unless stated otherwise, all prices include tax.