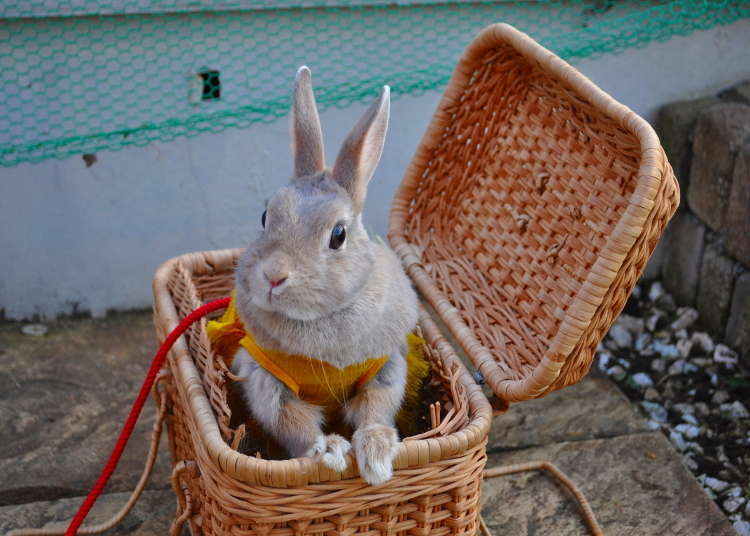 [MOVIE] A Visit to Bunny Theme Park “HUTCH” in Asakusa

Who doesn’t love bunnies? What if I told you there was a place where you could cuddle bunnies to your heart’s content? You can find just such a place in Tokyo at “HUTCH” With Bunny Asakusa! Play with, pet, and feed many rabbits on five fun floors! You can even take a photo with some bunnies on the balcony, set against the scenic background of Tokyo's Asakusa.

Playtime, Petting, and Pictures - With Bunnies! 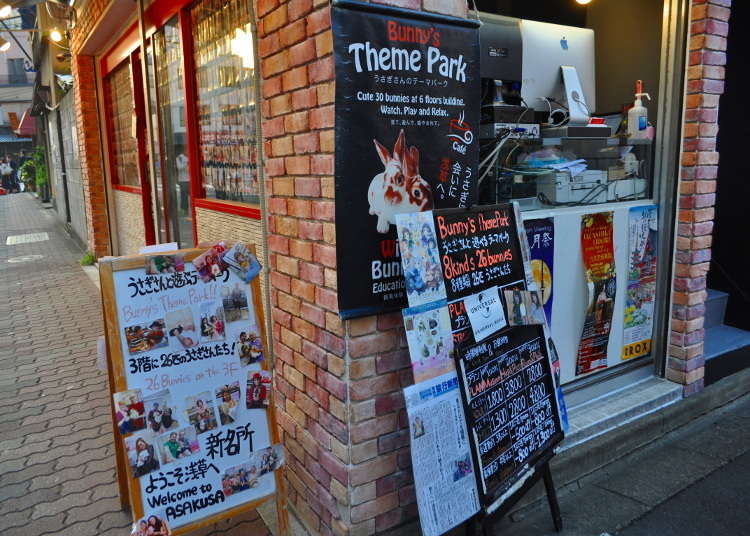 I’ve been an animal-lover for as long as I can remember, so when I heard about a “bunny theme park” in Asakusa, I jumped at the chance to visit! Over the past few years Japan’s “cat cafes” have become known worldwide, as places where visitors have the chance to relax with kitties while having a cup of coffee. I’ve visited a couple since being in Japan, each time was enjoyable, trying to coax the cats to play with toys–sometimes successfully, and other times, not so much. However, while there are well over a hundred cat cafes in Japan, cafes featuring rabbits are still something of a rarity.

I wasn’t quite sure what to expect out of a bunny cafe. From my limited contact with rabbits as a child, my image was that while cute, they weren’t necessarily as playful as a cat could be. Could I feed them carrots? Would they be afraid of me? I headed to Hutch in Asakusa to find out! 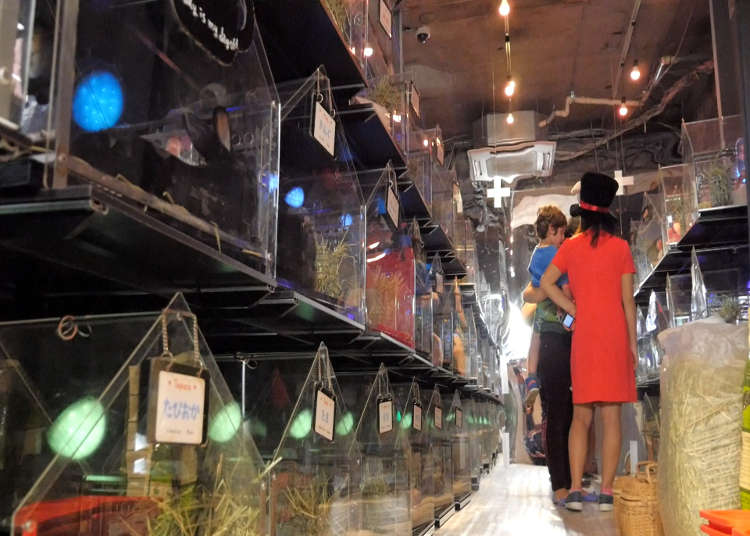 Hutch, which was reopened in October 2016 with a full renewal scheduled for December 2016, gets its name from the English name for a rabbit house. This so-called ‘bunny theme park’ is home to 26 rabbits, which includes eight different breeds. There are few different plans that visitors can choose from (the prices and details are listed at the bottom of the page) depending on what you’d like. The basic adult price of 1,800 yen allows you to visit the ‘Bunny Museum,’ while more expensive plans allow for hugs, photos, and time in a playroom. For my visit, I got the Happy 300% Plan–the full works! 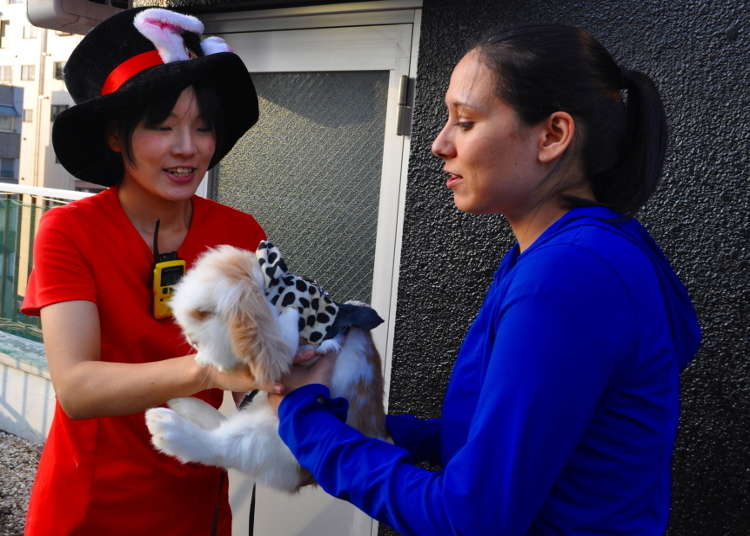 When I first arrived I was warmly welcomed by the staff, who showed me the Bunny Museum, which despite its name, is more like a bunny hotel than a museum. Each of the hutches, designed in a modern and ‘oshare’ (the Japanese word for chic coolness) style, house a single rabbit, along with food, water Timothy hay, and even some toys. Before I was to head to the private room I could choose two rabbits to bring with me. I had the chance to hold several bunnies of various breeds in sizes. The staff instructed me on the best way to hold them, as I was not in the habit of doing so. I was surprised by how different they all were, not only in appearance, but in personality. I had assumed that all rabbits were naturally timid, but there were quite a few that did not seem shy in the slightest!

The staff asked me which bunnies I wanted spend time with, but they were all so cute, I couldn’t pick just on looks alone! I asked for their recommendation. I just wanted a bunny that really liked being around people. I was introduced a brown and white female lop eared bunny named Beagle with a sweet and calm temperament. I could still bring along one more rabbit, but this time I decided to go for one that was completely different. An active, energetic rabbit named Jyan was my next pick. He was not only bigger than the previous bunny, but also had shorter fur, and longer ears. By the way he was hopping around his hutch, I had a feeling he might enjoy an even bigger space in the room.

Relax in a Private Room 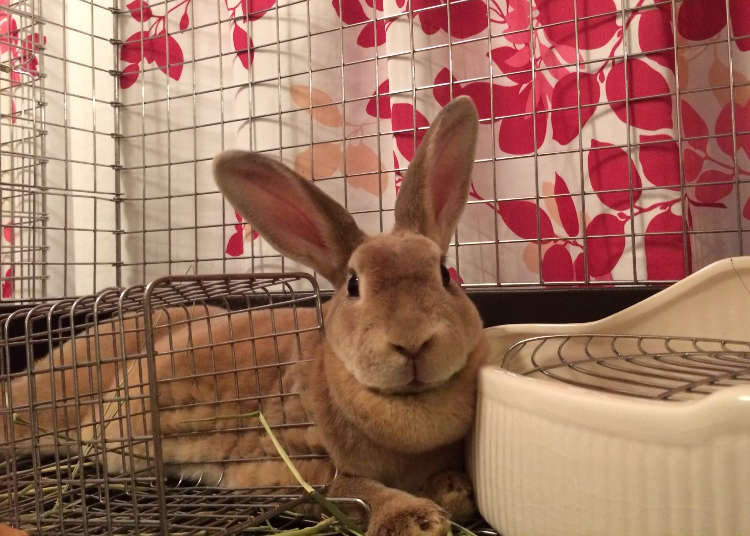 The bunnies were put into what looked like picnic baskets. Don’t be alarmed–it was only for a minute, to transport them up to the room. The room brought to mind a Japanese karaoke room, with a giant video screen and two sofa-chairs, separated by a barrier in the middle of the room. This was so that both of the rabbits could have space to freely roam, while avoiding any potential conflicts between one another. I spent a lot of time holding Beagle, who seemed quite content to sit in a lap and be pet 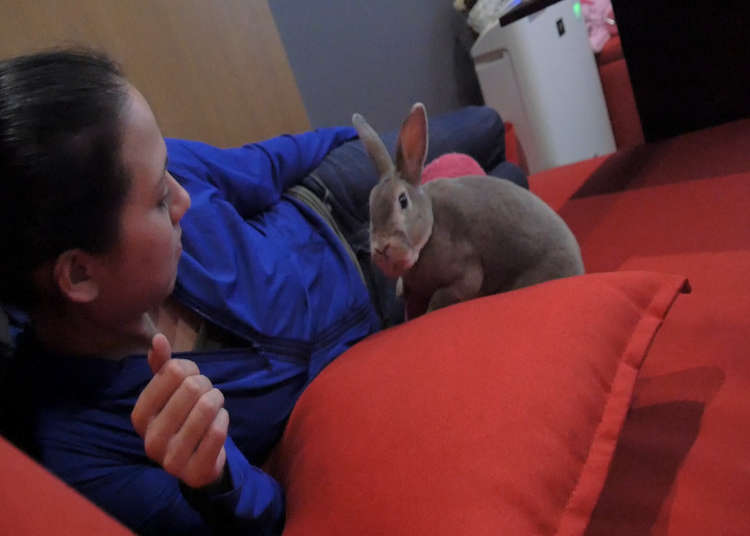 After a while I put Beagle down and let her hop about the room. I stepped over the barrier to Jyan’s area, where he had been with a staff member. While he didn’t object to being held, it was clear to see that he was a rabbit who was far more interested in playing than cuddling. After holding him for a few moments he soon jumped away and down to the floor, where he raced back and forth, almost as if he was playing a game of tag or hide-and-seek. He showed no fear hopping right up to the humans; and at one point, when I had returned to the other side to visit Beagle, Jyan climbed with his front paws over the barrier to say hello! 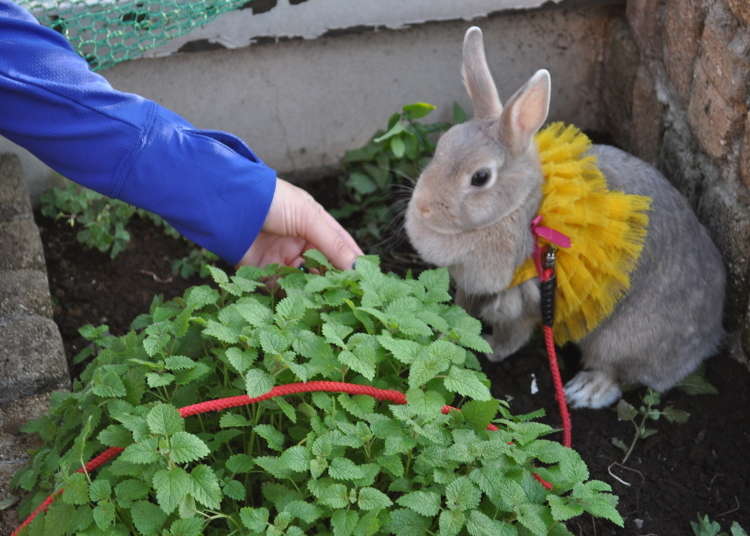 After spending plenty of time in the room I said goodbye to my two new friends, and headed up to the building rooftop for the next part of my visit. Unseasonably warm autumn weather and blue skies made for a perfect afternoon for getting out in the fresh air. Before long, two new bunnies joined me on the roof, where a porch swing alongside a small garden could be found. The garden wasn’t just for show; it was made up of herbs that the rabbits were free to nibble. The staff put an adorable harness on one of the smaller bunnies I had seen that day, named Shin. I set her down into the garden and took her for a stroll, although it was more like the other way around, as she was leading the way! Shin hopped through, stopping to munch on parsley, mint, and basil along the way. 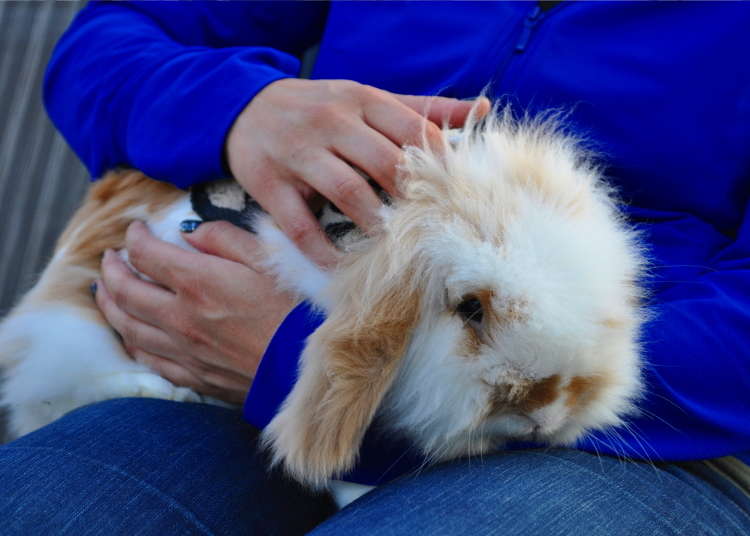 I thought now would be a good time to spend some time with the other bunny that was brought, Bibi. Bibi was a fluffy, floppy-eared bunny who I am convinced would melt anyone’s heart! Her fur was so long, it’s a bit difficult to see her face! I sat with her on the porch swing for a while and had our picture taken, with a perfect view of Asakusa in the background. While Shin did not seem to enjoy the swing’s motion, Bibi appeared to be quite comfortable. Finally, it was time to say my goodbyes to all of the bunnies of Hutch and hop on home. 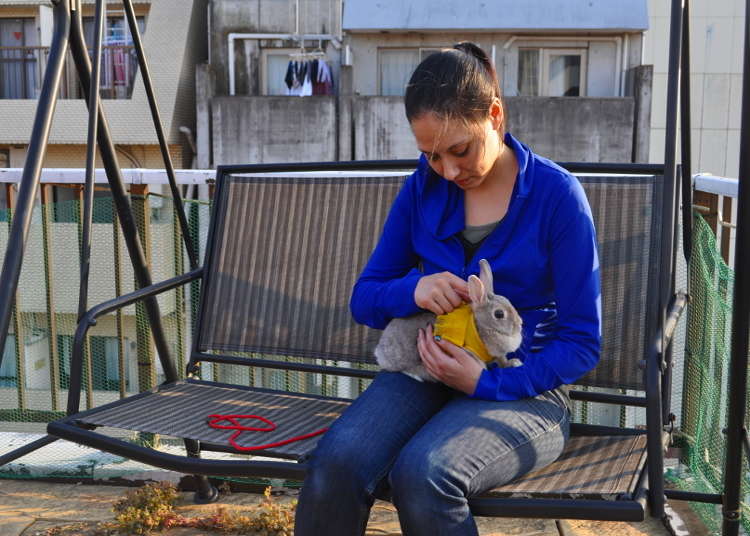 Located just a four minute walk from Asakusa Station, Hutch is very easy to find. There are a few different plans available, so you can choose the experience that best suits you.

Plans:
All plans include a drink and unlimited time.

※ Free for children between the ages of 0 to 6 years.

Whether you simply want to take a peek at some rabbits, or are looking to really play with the animals, please hop on over to Hutch, for an experience you will not likely find outside of Japan!