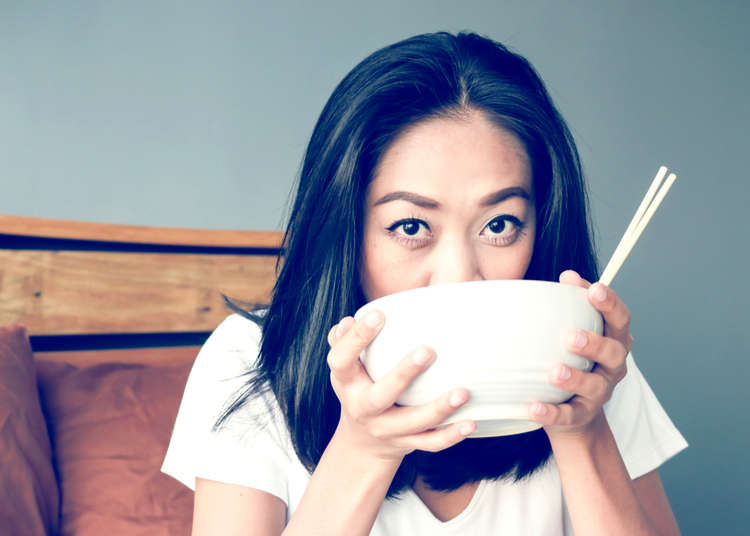 'Isn't That Rude?!' The Weirdly Complex Background Behind Noodle Slurping

Japan is a country which has many unique cultures within it, and slurping is one of the most unusual characteristics! This can be a huge surprise when you come across it for the first time as it often is considered as a bad behavior at meal in many other countries.

But when can/can’t you slurp, and what foods are fine to slurp – and which will leave you with locals giving you the stink eye? Let’s dive right in!

So, why do Japanese slurp? 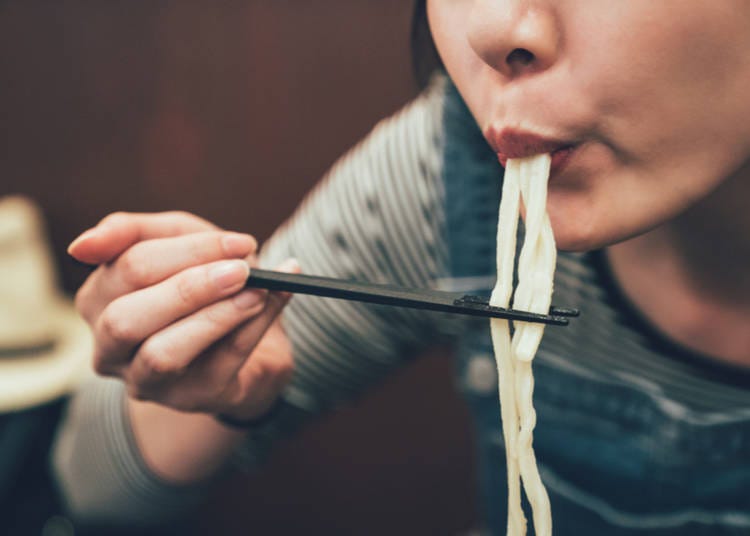 Unlike many other aspects of Japanese culture that have a long history, slurping is believed to have come about only 400 years ago when soba (buckwheat) noodles first formed their current shape and achieved the taste it has today and became one of the most popular fast foods in Edo (the former name of Tokyo). As the custom began with soba noodles, people used to slurp only when they ate it. However, as time passed, the range of food the custom applied widened to udon (wheat flour) noodles, ramen and any other noodles you can think of.

But why do Japanese slurp? There are basically two reasons.

The first reason being, which is also why this behavior started, is to feel the retronasal smell (or more commonly known as mouth smell - the ability to perceive flavor dimensions of foods) of buckwheat because soba does not have a strong smell that typically can be sensed through the nose.

The other reason is to prevent burning the tongue when you eat hot noodle dishes. To slurp, you need to let the air come into the mouth, and this results in lowering the temperature of the noodles. This means rather than waiting for your noodles to cool down, you can start enjoying their deliciousness immediately! Plus, the noodles soak up the water resulting in thicker noodles and less satisfying taste.

Also, after the Japanese began to slurp soba they began to recognize that all noodles, more so ramen—which is served hot—taste better when slurped. So, yet another reason to just go for it and find out for yourself! Just to back up this theory, some specialists discovered that the dish seemed far tastier when slurped as it required to keep the lips slightly open, so they do not wipe off the soup on the noodles as much as when the lips are closed, allowing more flavor to reach the taste buds.

Now, some of you might wonder "then, why don't they use a spoon to taste the soup/avoid burning?" To answer this, the first thing needed to state is that the slurping culture appeared before the Japanese were accustomed to western utensils. There is one theory which advocates that the Japanese were already a slurp-friendly nation, dating back more than 1000 years, taking into account the fact that the Japanese wooden spoon (called Saji) and any other sorts of cutlery, hadn't yet become commonly used by civilians for a long time, due to chopsticks that were the main eating utensil in Japan. It means they had no choice but to put their lips on a soup bowl and sip. Hence, people were rather gifted at making a variety of sounds during meal time.

This is why Japanese still slurp today rather than strictly using a spoon so as not to make a sound.

Which Japanese dishes were made for Slurping? 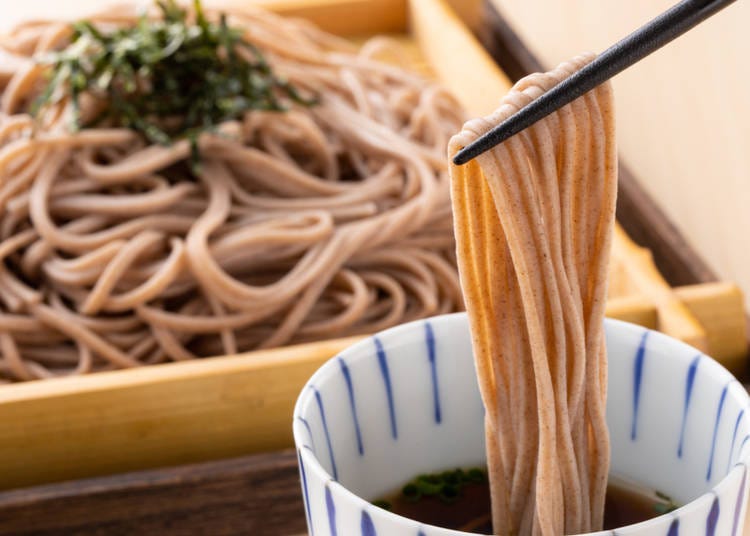 As a table manner for authentic Japanese cuisine, such as Kaiseki, no sounds should actually be made whilst consuming food, similar to the table manners of many other countries’. However, these noodles mentioned above as daily meal became an exception. And the exception led to another. Nowadays, the majority of people slurp when they eat soup or drink hot beverages, as well as noodles.

(There is another slurping tradition which can be seen at a matcha tea ceremony. As a rule, you must have the last sip of your tea with a slurp to show appreciation to your host, stating without the use of words that ‘mmm the tea was so delicious I drank it all up’, and also to let the host know you finished your tea so he/she can move the ceremony forward. But let’s put this tradition aside for now, as it is another discussion for another article.)

What's considered as a Good Slurp? 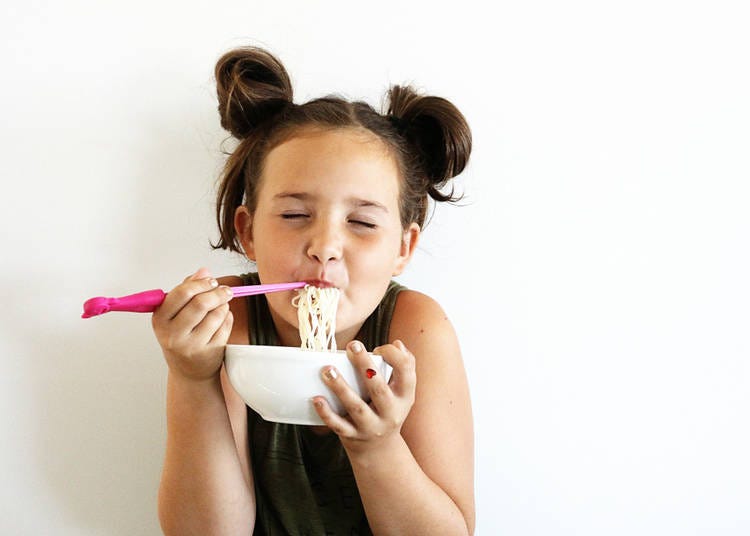 Slurping is done just for you and yourself to enjoy a meal. It is not a strict rule whatsoever. Hence, there is no need to worry about whether you are slurping in the right way, nor how others are able to hear you slurping. As long as you are savoring your dish, it is a good slurp, and this even includes when you opt not to slurp.

Having said that, the Japanese also share a common sense that they should not slurp too loudly but at a reasonable volume; otherwise, it might disturb others. In fact, in contemporary Japanese society this has become something of a controversial issue today, even becoming a tongue-in-cheek term: "noodle harassment."

The more Japan becomes familiar with foreign cultures with each passing year, the more the Japanese became aware of a world-wide common sense in terms of table manners. Also, the increase in the number of travelers from abroad, who are shocked by this culture, in many cases, fuels the hesitancy in slurping that some Japanese already possess.

Nonetheless, it is nearly impossible to sweep it under the rug, since most people are rather fond of it, and also this habit is already deeply rooted in their daily lives.

As a compromise between the question of ‘to slurp or not to slurp’, people often consider it to be acceptable to slurp Japanese food (or more widely, Asian food), while all other cuisines such as spaghetti are preferably eaten without making any sounds.

So what do Japanese think about slurping nowadays? 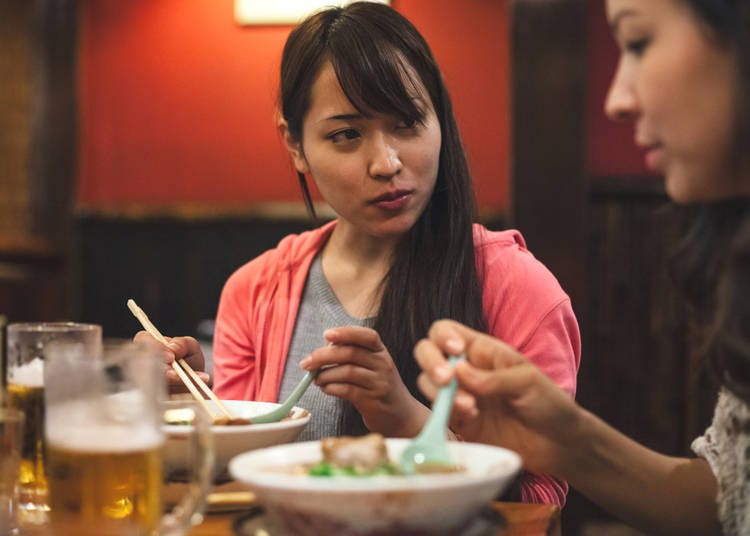 So, apart from the current issue "noodle harassment", what do the Japanese make of slurping?

One Japanese man in his 50s told us, "When I say I love soba noodles, it includes the sound of slurping. It doesn't really feel like I'm eating soba if I don't slurp. I believe it is the essence of the dish." He also added, "I understand that it is important to globalize our country and to try adjusting our lives to the international clientele. However, slurping is a part of our culture. I'd be happier if the Japanese proudly introduced it to people from abroad rather than saying goodbye to one of our beloved traditions. I mean, you'd try eating curry with your right hand when you go to India, wouldn't you? Then, why not slurp?"

This got me curious about how other Japanese approach slurping, so I asked a few Japanese natives some of the same questions I was asked by curious travelers to see what they had to say in response:
Q1) Are there any differences between genders? For example, do people consider slurping as unladylike? Do they naturally expect men to slurp?
Q2) What do the Japanese think of those who cannot slurp? Do people subconsciously judge them?
Q3) Do the Japanese learn how to slurp at school/from their parents?
Q4) Are people who can slurp well likely to earn respect from others? 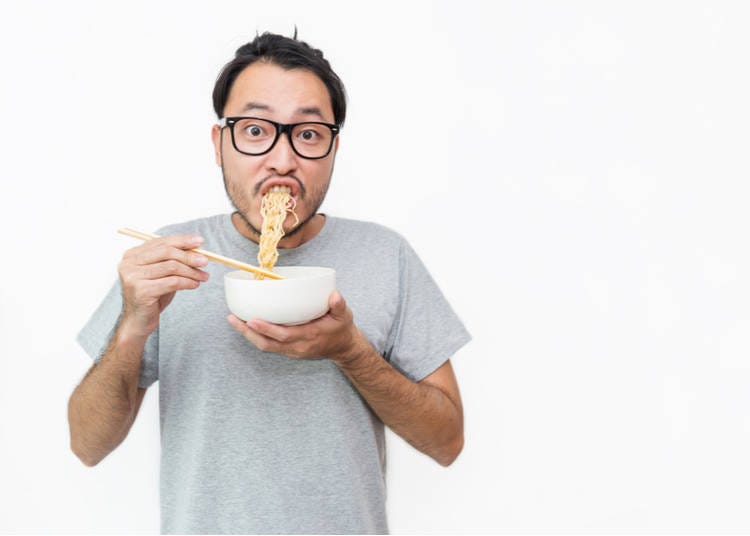 Shoichi (male/40s) said, "I don't think there are any differences between genders. I've never met someone who comments on women slurping. However, I know my father once said it was not manly when he saw a man who didn't or couldn't slurp, and I can imagine some elders might think like him, which is nonsense, to my eyes. So, I dare say there's no difference between genders, although there might be some different points of view between generations. Luckily, most people nowadays don't care how others are eating unless you are making too much of a loud noise!"

While Shoichi says no one would judge you for not slurping, Asuka (female/20s) shared an interesting anecdote. "When I was at uni, I once met a boy who was asked, 'what kind of girls do you like?' His reply: 'I don't like categorizing girls. I believe everyone has their own beauty. Hence, I won't say who's my type.' It's quite sweet of him, isn't it? But, then he continued, 'Though, there is only one kind of girl I wouldn't happily go out with: girls who cannot slurp. I can never stand them.' Slurping seemed to be somehow so crucial to him!"

As to the last two questions, Asuka said, "I'm pretty sure no kids learn how to slurp at school. I didn't; neither did my parents nor friends. Some might encourage their kids to slurp at home, though. But I think it's more like learning words. You just naturally learn it by seeing how adults do it." Then, she added, "Does the nicer the slurp mean bigger the respect? Well, yes, it absolutely would if you were in a gourmet manga or something! Sadly, in real life, you won't be praised for it. However, some elders really love to hear a good slurp, so they might say to you 'ohhh that was a really good one.'"

Slurping might be a bit challenging for some travelers. But I believe it is going to be one of your amazing experiences in Japan! Why not let yourself be a bit naughty and give it a try? Or, why not ask the Japanese sitting next to you in a restaurant how to slurp and start a conversation with them?