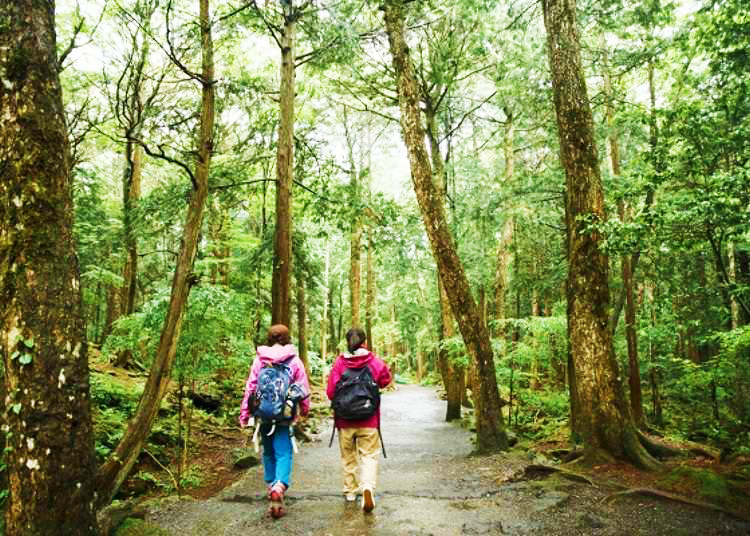 Mount Fuji has a lot of mysterious nooks and crannies to offer that just wait to be explored! On the mountain's northwest side spreads the "Sea of Trees", Aokigahara Forest, a vast and lush national park with numerous walking trails.

Deep lava caves, such as the Wind Cave and the Ice Cave, located on the east and west ends of Aokigahara Forest, are must-visits when in the area! Put on your hiking shoes and join us on a trip around Mount Fuji, Aokigahara, and their many magnificent sights. 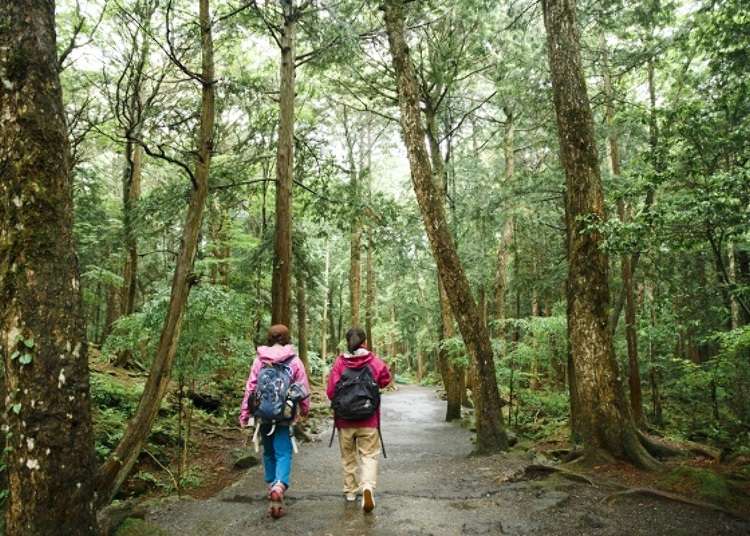 The first stop on our journey is Aokigahara's Fuji Fugaku Wind Cave, just a three-minute walk away from the visitor center. The forest at the foot of Mount Fuji is so dense that even on a rainy day, you'll hardly feel a single drop of water fall on you - simply because the canopy is so dense.

No matter whether it's raining, snowing, or strong winds are blowing, Aokigahara Forest will protect you and your walking tour from the elements. Make sure to wear proper shoes and a raincoat before you go exploring, though!

The Wind Cave: Chilly, Even During Summer 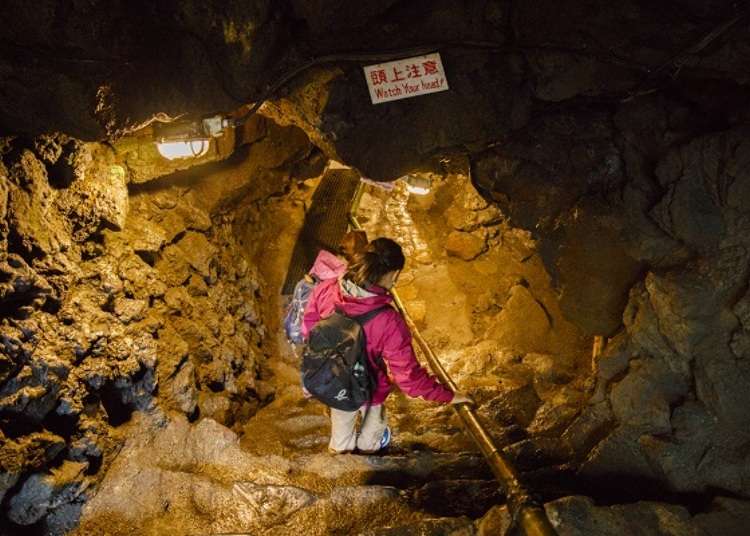 Once you've arrived at the Wind Cave, you might be shocked by the low temperatures. Throughout the entire year, it's only between zero and three degrees Celsius inside the cave, so gird yourself with a warm jacket!

Another astounding thing: the entry to the cave is pitch black. This isn't only because the cave is rather deep but also because it is made entirely out of volcanic stone. In total, the cave is 201 meters long and has various tunnels reaching up to 8.7 meters in height.

It takes around 15 minutes to explore the entirety of the Wind Cave, which is definitely a must-see on your Mount Fuji exploration tour.

The Echoing Drip-Drip of Water 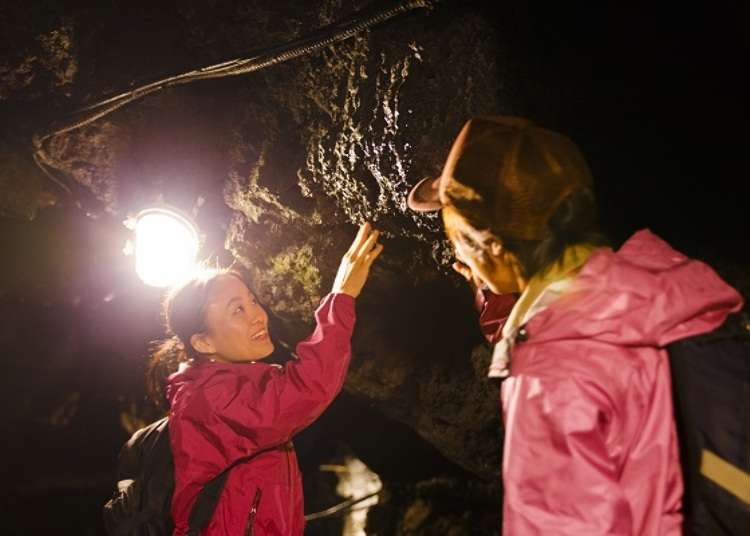 As you venture deeper into the cave, you'll be greeted by large icicles hanging from the ceiling and massive blocks of frozen water adorning the Fuji Fugaku Wind Cave's walls.

This beautiful phenomenon is due to the many big and small air bubbles in the lava which created all kinds of holes when the lava cooled down and turned to stone. When it rains, water drips through these holes and down into the cave where it freezes and creates these amazing ice structures. If you stand still, you can actually hear the constant drip-drip of water, as well as spot some trickles along the rocks.

Further down the cave are the relics of the old silkworm and seed storage, remainders of the prosperous silkworm industry of the Taisho area. The naturally cold temperatures of the cave served the industry until around 1955 as a natural fridge that kept seeds fresh and silkworms from growing.

Getting Lost in Aokigahara Forest - the Sea of Trees 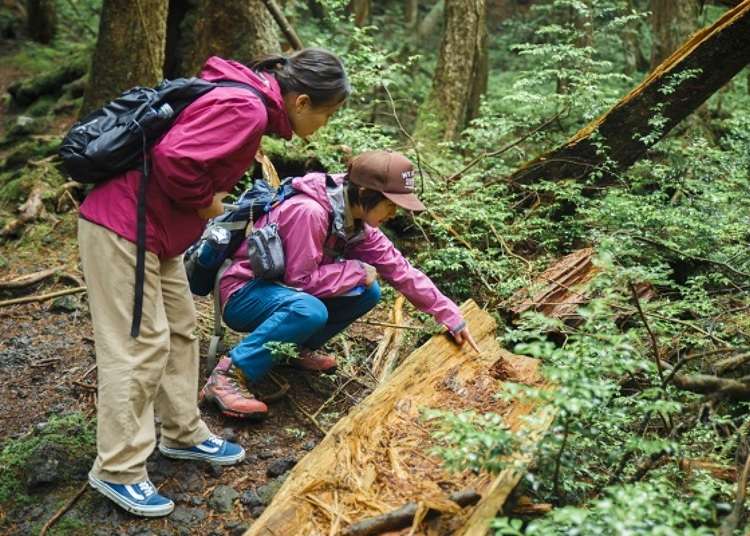 It is quite a bit of a walk from the Wind Cave to the Narusawa Ice Cave - but not an unpleasant one. This is the opportunity to dive into Aokigahara, explore the Sea of Trees, and discover the unique and mysterious natural beauty of the vast forest.

While we mentioned "getting lost" in the headline, do make an effort not to stray too far from the walkway. Due to the density of Aokigahara, it is very easy to genuinely get lost!

However, we highly encourage you to keep your eyes open and look out for the many different things that are to be discovered in the Sea of Trees, such as mushrooms growing from treestumps and birds crying from the canopy. Take your time and explore the national park to your heart's desire! 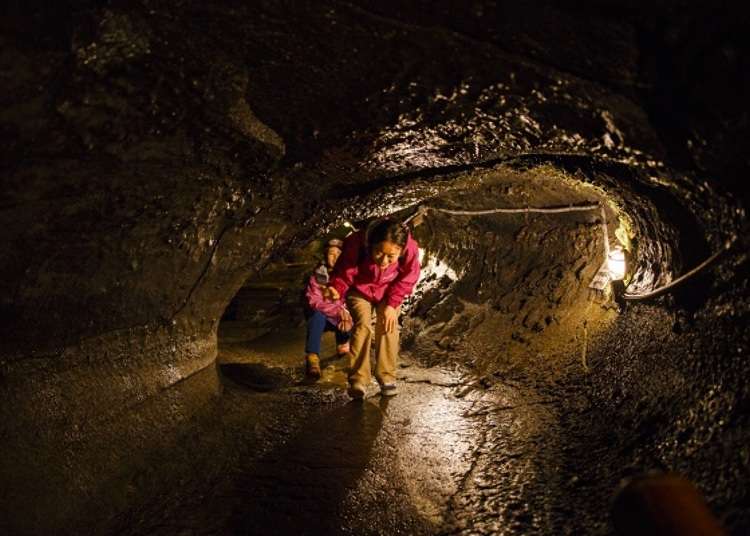 The Narusawa Ice Cave is yet another enigmatic place near Mount Fuji, created from volcanic rock and is about 153 meters long. The cave tends to get so narrow at certain points that only one person at a time can squeeze through to venture deeper into the cave.

Just like the Wind Cave, the Ice Cave has low temperatures between three and zero degree Celsius throughout the entire year. Steep, often slippery staircases lead down the deep cave so make sure to tread carefully.

The Mystical Shine of Ice 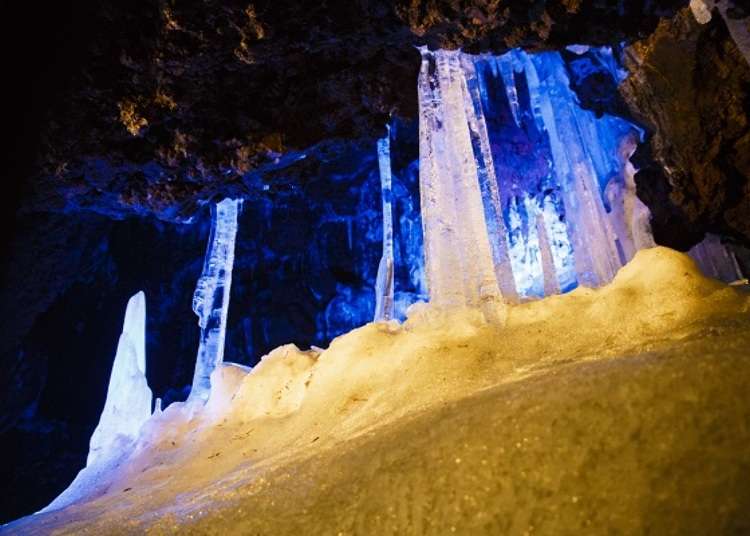 Magnificent ice formations grace the deepest part of the Ice Cave. Once, before ice could be made with machines, Mount Fuji's natural ice was cut and used for refrigeration.

Today, however, the dripping water is left to form naturally and the enigmatic formations and huge icicles are lit up beautifully. The shimmering and sparkling of all the different shapes is a fascinating sight - befitting our Mysterious Mount Fuji tour.

Tasty Mount Fuji: Treat Yourself to Ice Cream and Souvenirs! 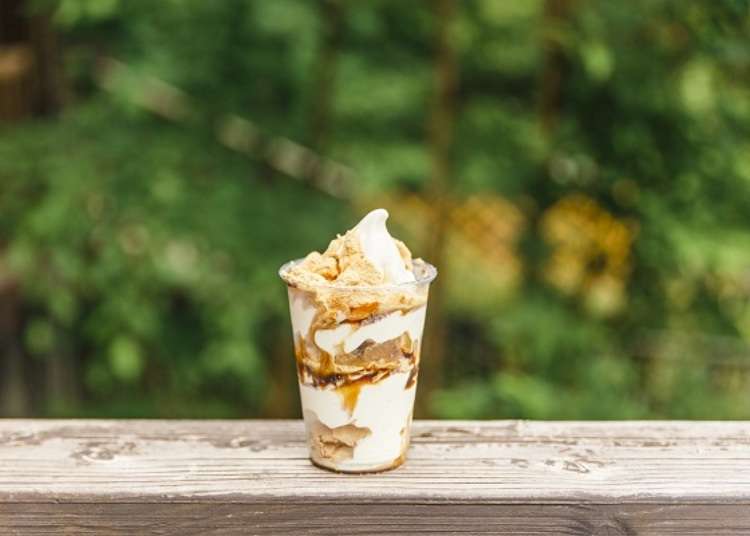 At the information center of the two caves, various food stalls and little, charming souvenir shops can be found to offer some relaxation after a long hike through Aokigahara Forest.

Our warmest recommendation is the bellflower parfait for 520 yen. The full name of this delicacy is "Kikyo Shingen Mochi Parfait" - kikyo shingen mochi is a traditional Japanese rice cake dessert from Yamanashi Prefecture that you certainly shouldn't miss out on! This soft, creamy delicacy will not only melt on your tongue, but also rejuvenate you after a long day of exploring Mount Fuji and Aokigahara, its Sea of Trees.

Guide to Mt. Fuji area's famous sightseeing locations and activities ...
Preparing to Hike Mt. Fuji
What to do at the Top of Mt. Fuji
Information about Mt. Fuji
Book Now ▶ Explore Aokigahara, the Sea of Beautiful Trees!
*This information is from the time of this article's publication.
*Prices and options mentioned are subject to change.
*Unless stated otherwise, all prices include tax.