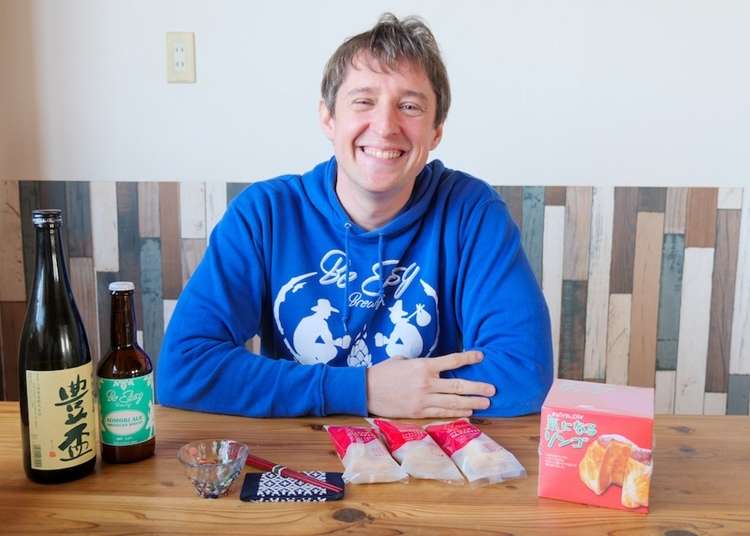 10 Aomori Souvenirs Recommend by An American Living in Aomori

Aomori Prefecture is home to natural beauty, intriguing culture and history, fresh agricultural products, great seafood, and the eye-catching Nebuta Festival. And there are plenty of unique Aomori souvenirs and products that center on these local resources available in gift shops throughout the prefecture!

However, there are often differences in taste between Japanese and non-Japanese, making us curious about what’s popular among the latter. So we asked non-Japanese living in Aomori about which 10 souvenirs they’d recommend to international tourists.

(The following recommendations reflect the personal opinion of the interviewee.)

Gareth, born in the United States and currently living in Hirosaki

Born in Pennsylvania, Gareth Burns joined the U.S. Air Force after graduating from high school and was assigned to Misawa Air Base in Aomori Prefecture at the age of 19.

While serving as an airman, he became eager to experience Japanese culture and moved to Hirosaki upon completing his service. He also decided to begin brewing his own craft beer and opened a craft beer workshop and taproom in 2016.

He currently spends his busy, fulfilling days making a popular craft beer with fans visiting from all over the country, staring as an enthusiastic talent on local TV, and playing the Tsugaru shamisen. 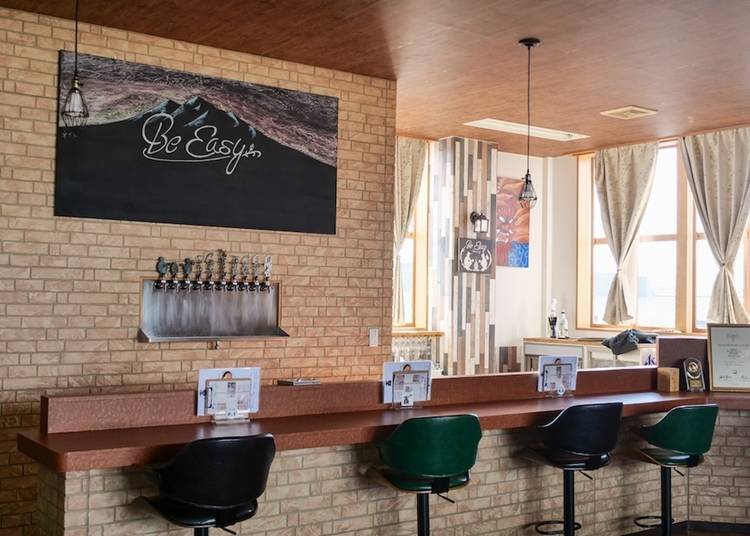 Regarding the charm of Aomori, Gareth says, “Aside from Aomori apples, Nebuta, and Hirosaki Castle, there are many things in Aomori Prefecture that aren’t famous but are still interesting. They might seem commonplace to locals, but it would be a shame not to know more about them.”

With his knowledgeable point of view, Gareth happily shared his top souvenir recommendations, including a few he tried for the first time. 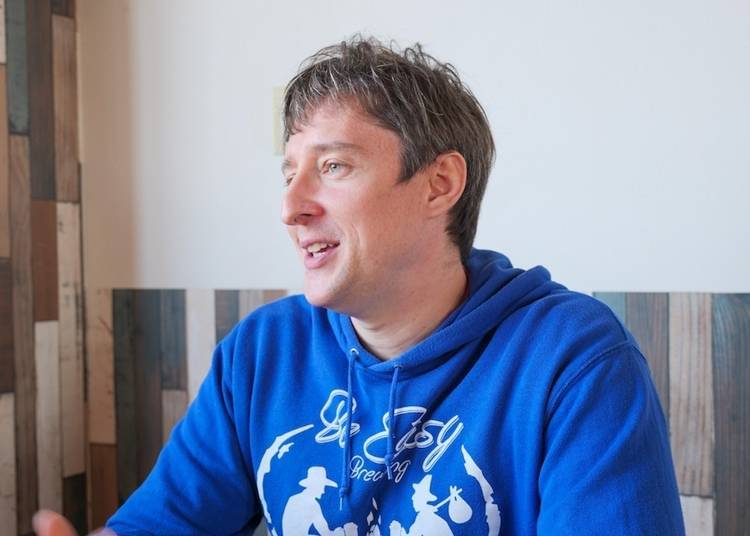 Gareth is fluent in Japanese 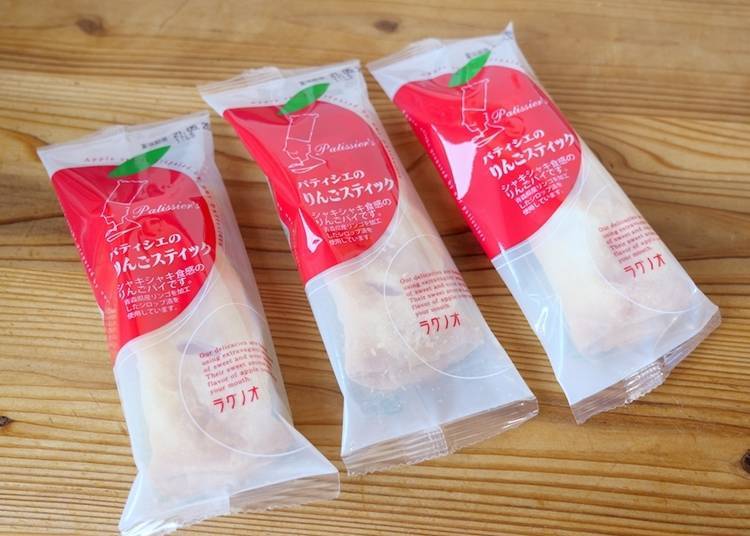 “Freshly baked is the best. I like when they contain custard and cinnamon, and the crust isn’t very thick. There are a number of types of apple pies sold in Hirosaki, so they’re fun to eat and compare,” says Gareth. He hadn’t tried some of the popular souvenir pies sold in the city previously but did so when we spoke. 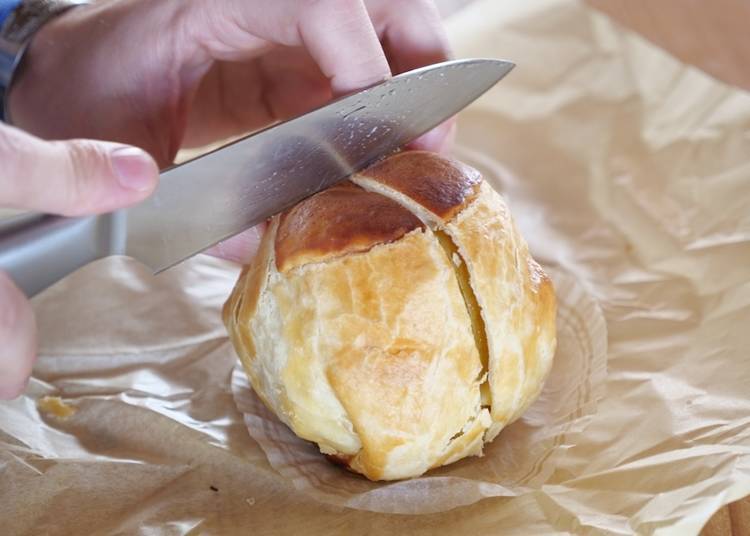 Upon taking a bite of a “Patissier’s Apple Stick,” Gareth exclaims: “Yeah, it’s delicious! I can taste a little cinnamon; the crust is soft and light. It’s easy to eat – this is a great souvenir.”

Then, he excitedly cuts a “Curious Apple” with a kitchen knife, eagerly eats it, and smiles, “This is delicious too! The big apple is delicious, and the texture is crispy.” These apple pies, popular with Japanese tourists, seem to be appreciated by non-Japanese too. 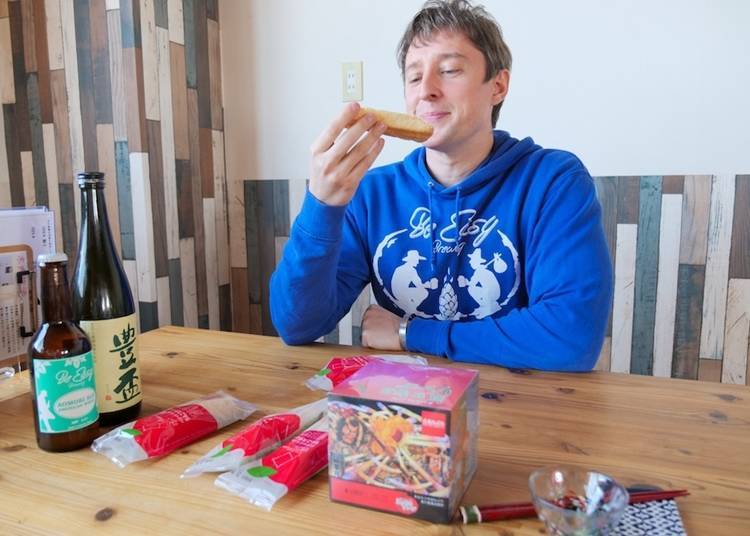 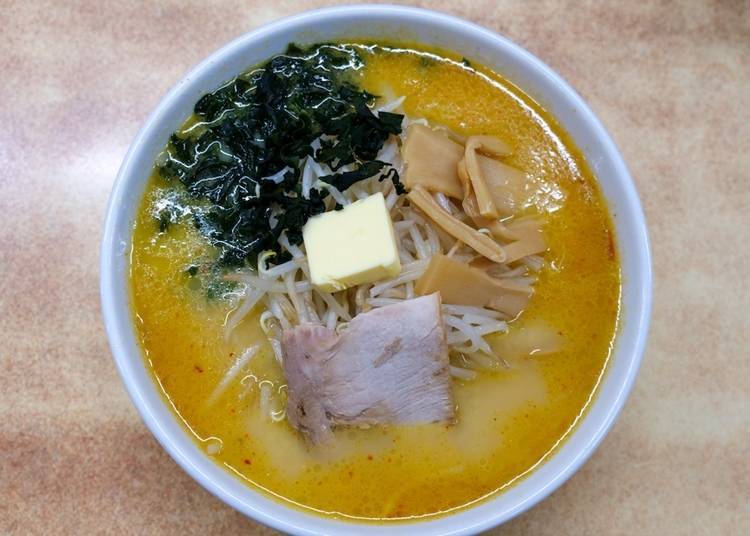 Next is Aomori’s soul food: miso curry milk ramen. This variety of ramen combines all the ingredients in the name, and Gareth has liked it since trying it for his work on TV.

“The three flavors don’t overpower each other, and actually have a mysteriously complimentary taste. In the United States, there are a lot of people who like strong-tasting foods, so I think they’d especially like it,” he says.

Cup ramen that keeps for a long time and uncooked noodles for home use are also available, making them great souvenirs for long-distance travel. 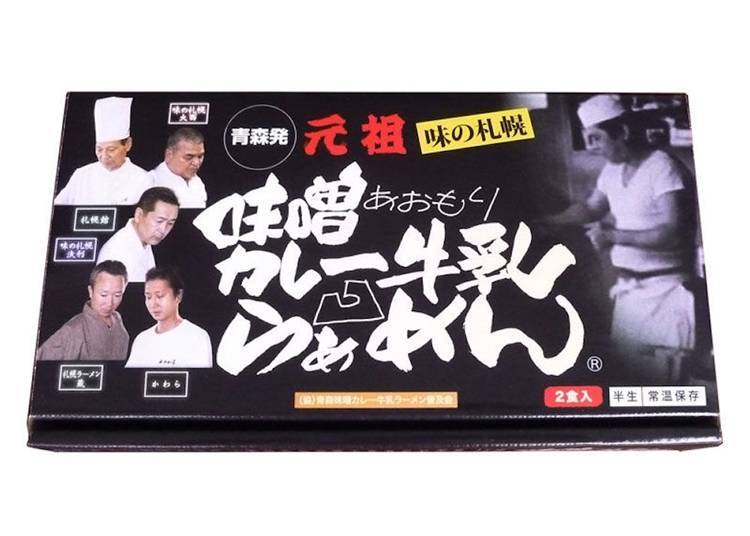 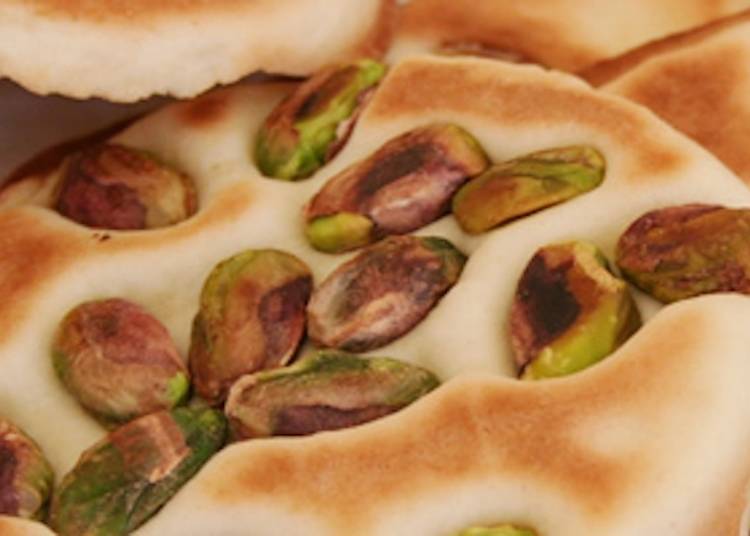 Tsugaru’s hand-baked “Oyama Senbei” rice crackers are another of Gareth’s recommended souvenirs. He says, “These rice crackers contain nuts and pistachios, and I think foreign visitors would absolutely love them.”

This popular product features high-quality nuts and crisp hand-baked dough that create a unique taste. Artisans carefully bake each rice cracker, and it’s fun to discover your favorite. Be sure to take a look at the baking process when visiting the Oyama Senbei store. 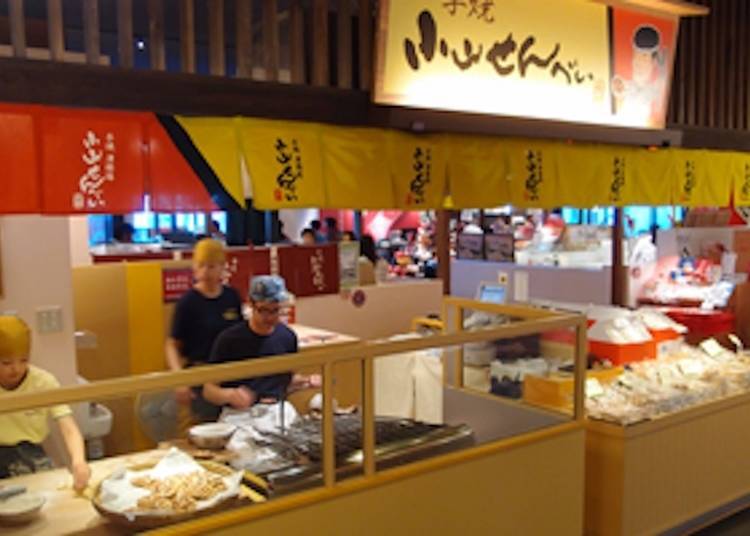 There’s a store at Shin-Aomori Station, where the Shinkansen stops, so it’s easy to stop by on your way home (Photo courtesy of: Oyama Senbei) 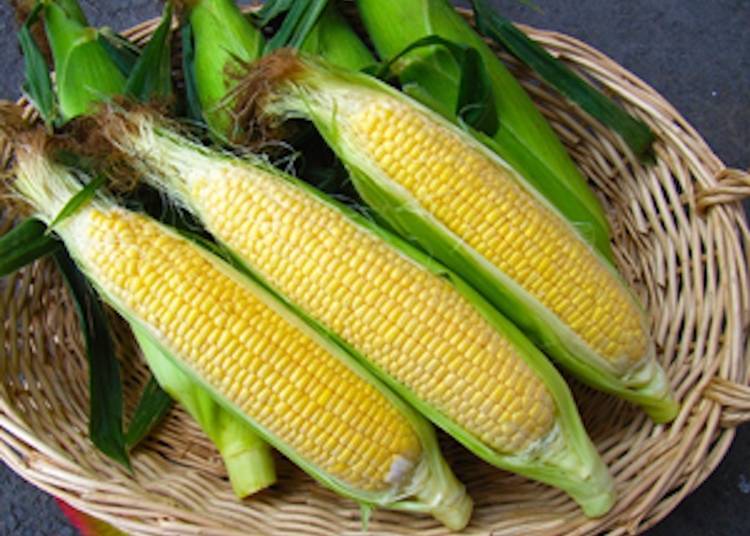 “It’s just sweet and delicious!” Gareth says in praise of the Aomori’s “Dakekimi” brand corn. Corn cultivated and harvested in western Hirosaki City’s Dake district, with growing temperatures around 18 to 20 degrees, is characterized by its sugar content, making it sweeter than some melons.

Gareth states, “The most delicious way to eat it is to simply boil it. But since it’s a raw product, I wonder if it can be taken overseas.”

While some ears are vacuum-sealed to keep their delicious flavor, the taste of harvest season (mid-August-September) corn is unmatched. Don’t miss it! 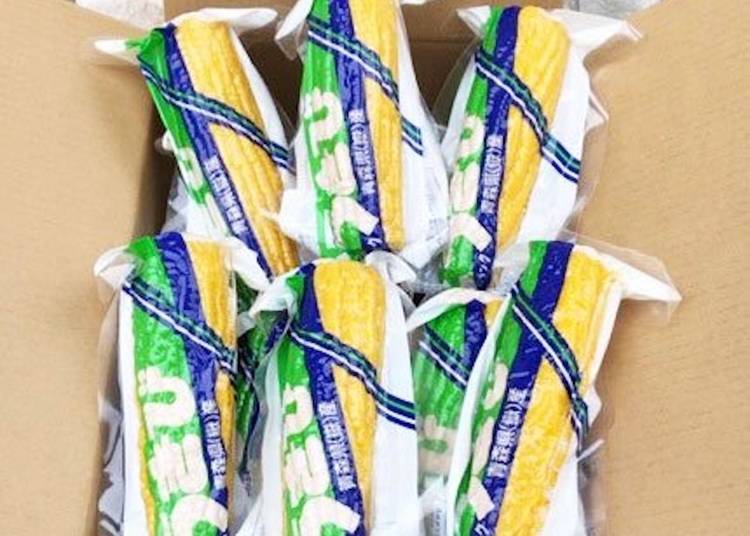 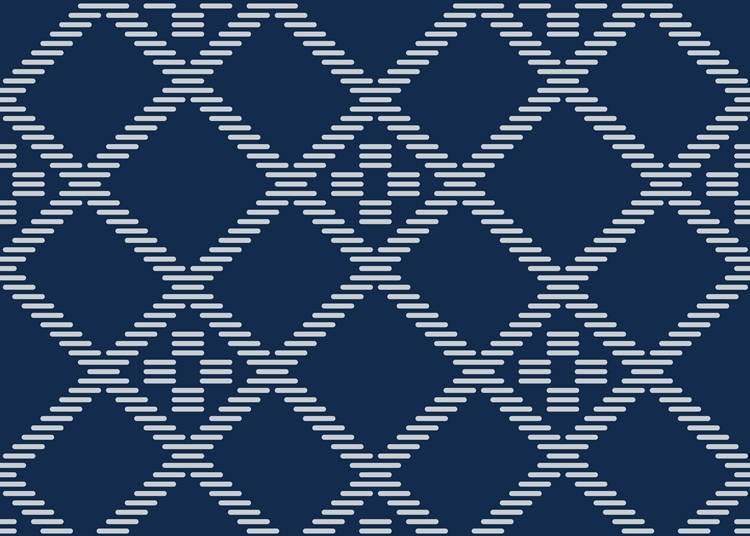 “I definitely recommend traditional crafts,” says Gareth. For example, traditional sashiko (Japanese embroidery) “kogin-zashi,” the Tsugaru region’s popular handcraft with beautiful geometric patterns. Gareth focuses not on the design but on the history and origin of the art form.

Around 300 years ago, kogin-zashi began when sashiko was added to linen cloth so that even a little warm air could be trapped in clothes in the harsh winter cold. Being able to share that knowledge makes it an even greater souvenir.

Various kogin-zashi items are sold at souvenir shops throughout the prefecture, but Gareth recommends practical items like business card holders and coin purses. 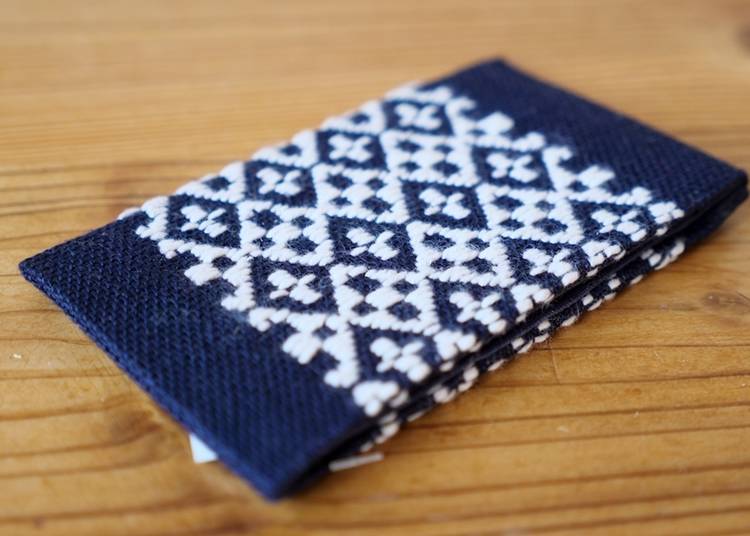 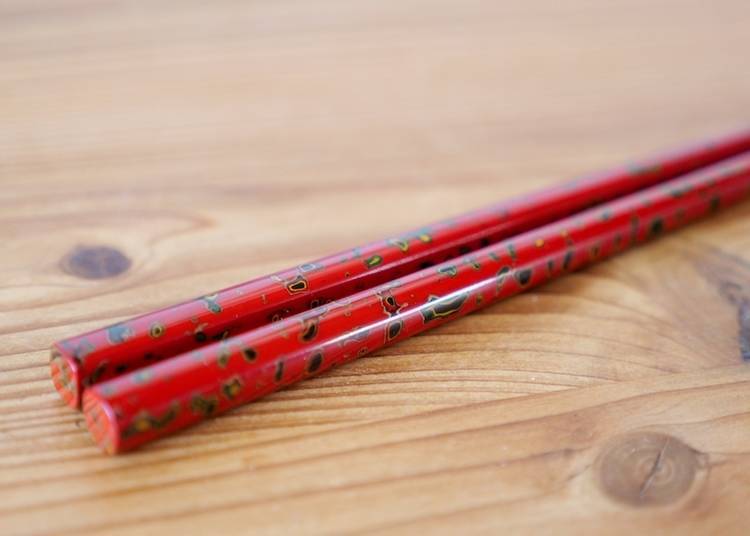 Next is “Tsugaru Nuri,” with its glossy, patterned surface, created by applying and polishing multiple layers of lacquer. This traditional craft represents Aomori Prefecture, but “it’s important to know the story of how it’s made,” says Gareth.

“People should know how much effort and time it took for the craftsmen to make it and how multiple layers of lacquer make it harder to stain. If you tell the recipient, they’re sure to be pleased.”

Each piece embodies the effort and skill of its creator, and standard items include chopsticks, bowls, cups, and plates. 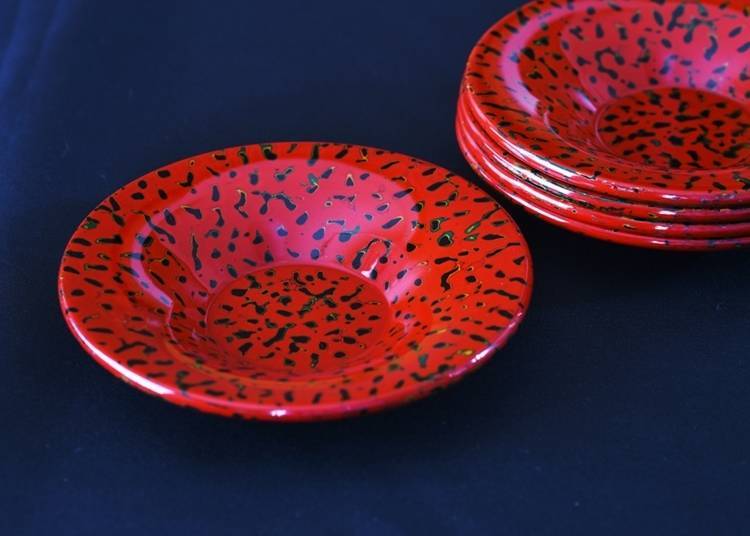 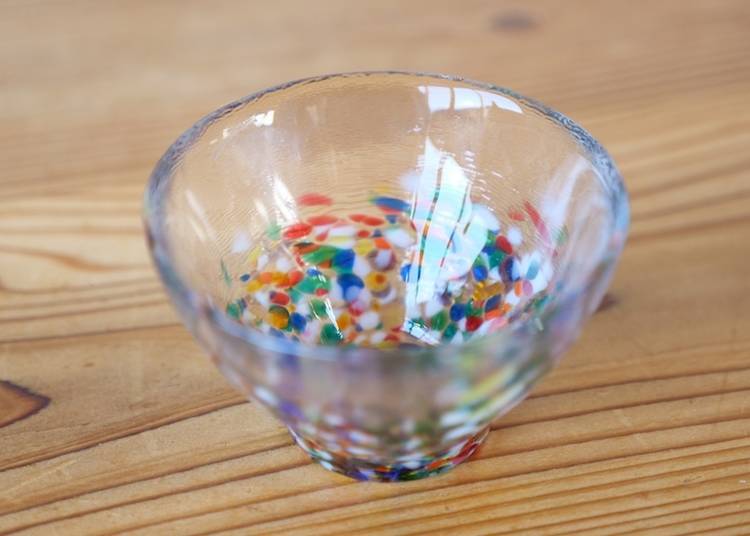 Gareth’s favorite souvenir is “Tsugaru Vidro” glassware, which conveys a feeling of the beauty and warmth of Japan’s seasons. “I think this is beautiful just looking at the design, but it’s even more interesting to know how it came about,” he says.

Tsugaru Vidro finds its inspiration in the form of glass floating balls traditionally used in the fishing industry. With skills gained over many years, artisans have mastered complicated techniques for shaping and blending the colors of the glass and have grown the brand into one designated as a traditional craft of Aomori Prefecture. 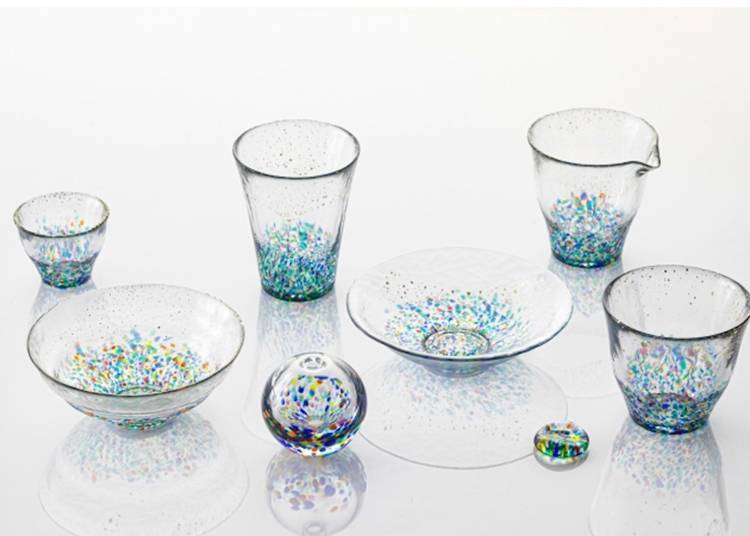 “It’s not just a beautiful glass product; it contains solid technology, an interesting history, and the creativity of craftsmen who carefully make each one. Some traditional crafts are expensive, but I don’t feel these are expensive,” says Gareth.

Products like sake cups and beer glasses are popular, and you’ll surely find a favorite among the wide variety of Tsugaru Vidro products. 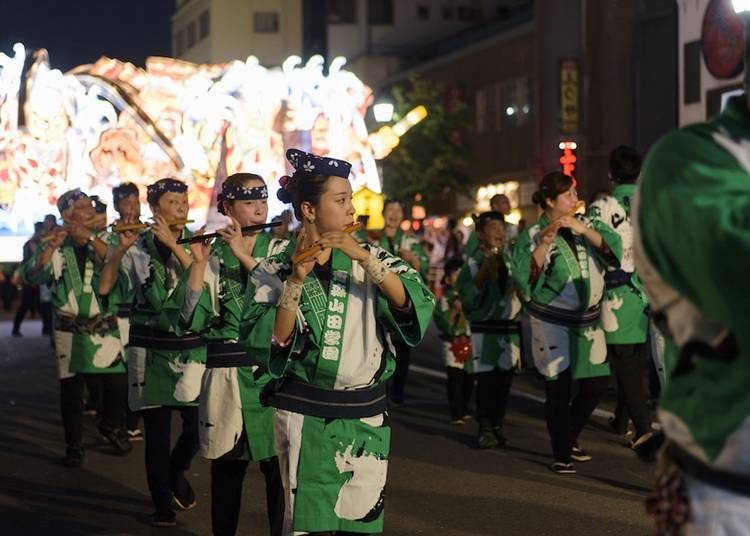 The sound of the flute livens the Nebuta Festival. (Photo courtesy of Aomori Tourism Convention Association)

The Aomori Nebuta Festival is one of three major festivals in Tohoku. The sight of a powerful “Nebuta” warrior float on parade is an impressive image, and Gareth recommends getting a “Nebuta Flute.”

When asked why, he says, “It’s a simple instrument, but it has a long history, and it’s interesting that the tones differ depending on the player.”

Skill and a real flute are needed to produce the best sound, but the affordable flutes sold at souvenir shops still make perfect Aomori souvenirs! 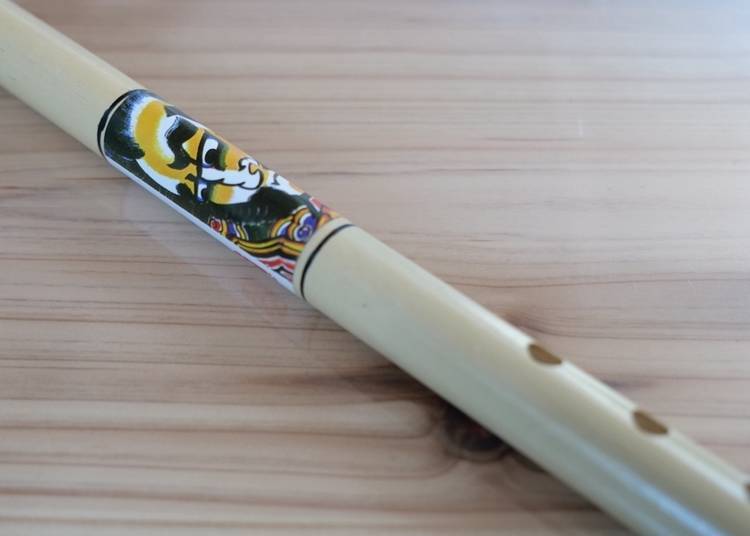 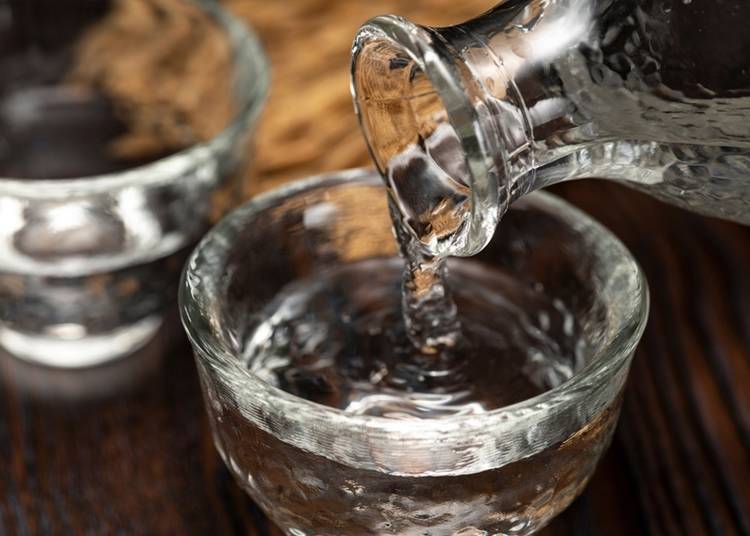 Sake is popular overseas too

With Japanese food experiencing an upswing in popularity worldwide, sake has attracted increased attention as well. In particular, “local sake” from specific areas with distinct aromas and flavors is becoming a staple souvenir.

“Japanese rice is delicious, and there are many sake breweries that have been in business for a long time. There’s a variety of types, and the tastes differ even from the same brewery,” Gareth says.

When asked to recommend sake for novices, he immediately answers, “‘Houhai.’ It’s made at Miura Sake Brewery in Hirosaki City; it has a gentle taste and is easy to drink. Sake is classified as ‘dry’ or ‘sweet.’ I like Houhai because it has its own distinct taste.” 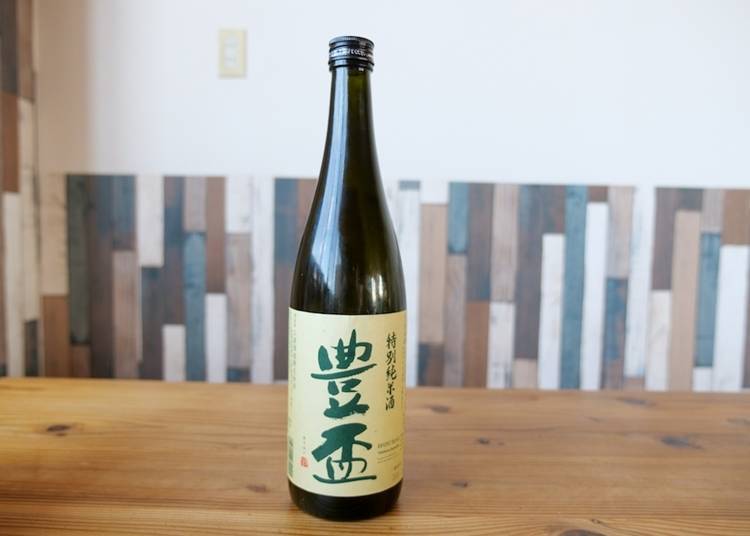 “If you’re sightseeing in Aomori, please try some local sake,” says Gareth. There are local sakes in addition to Houhai, so be sure to compare a few and pick up a bottle of your favorite. 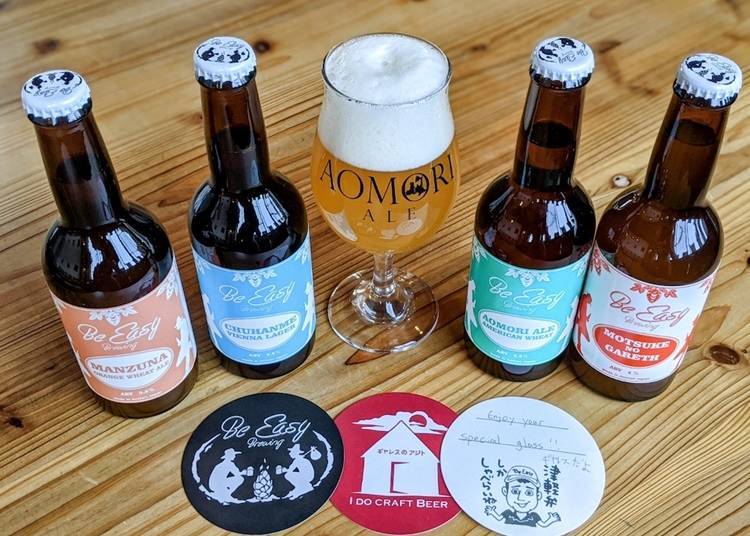 The last recommended souvenir is, of course, Gareth’s own craft beer. There’s a good variety of strong, rich, or fruity flavors, and refreshing, easy-to-drink beverages.

Among them, Gareth recommends “Aomori Ale” for beginners. A limited-edition dry wheat beer, it’s only available at 20 stores in Aomori Prefecture. There are also other products with a uniquely Aomori vibe, like a craft beer made with apple juice, so be sure to try a few! 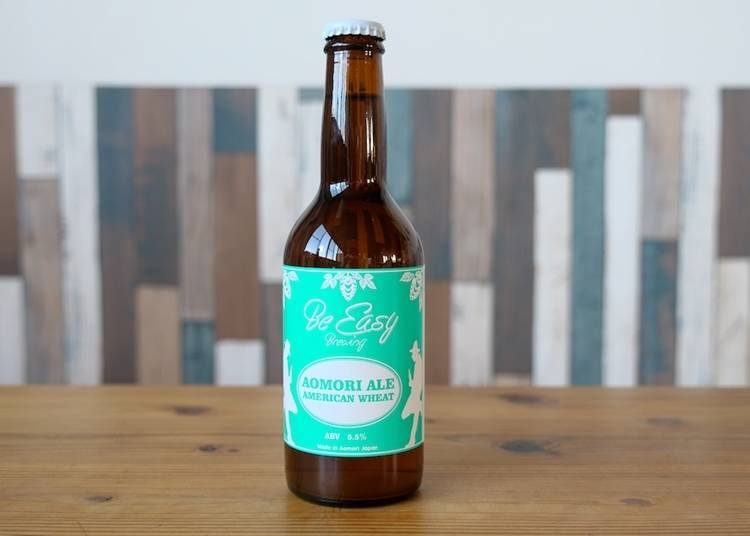 “Aomori Ale” is easy for beginners to drink (600 yen, including tax)

Many of Gareth’s recommendations are not exclusives and can be purchased at souvenir shops and product halls throughout the prefecture. However, the size of each shop and the products available differ, so here are a few recommended locations. 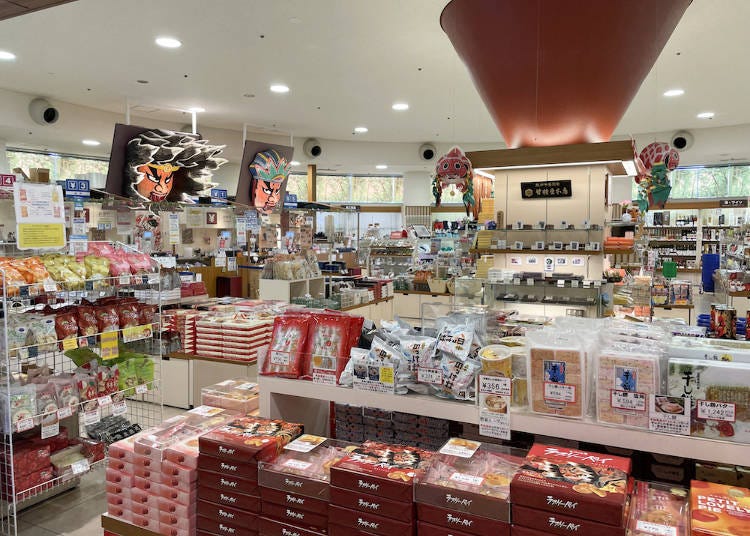 Aomori Prefecture Tourist Center 'Aspam' is about an 8-minute walk from JR Aomori Station. This product hall boasts the largest selection of gourmet products and traditional crafts in the prefecture. 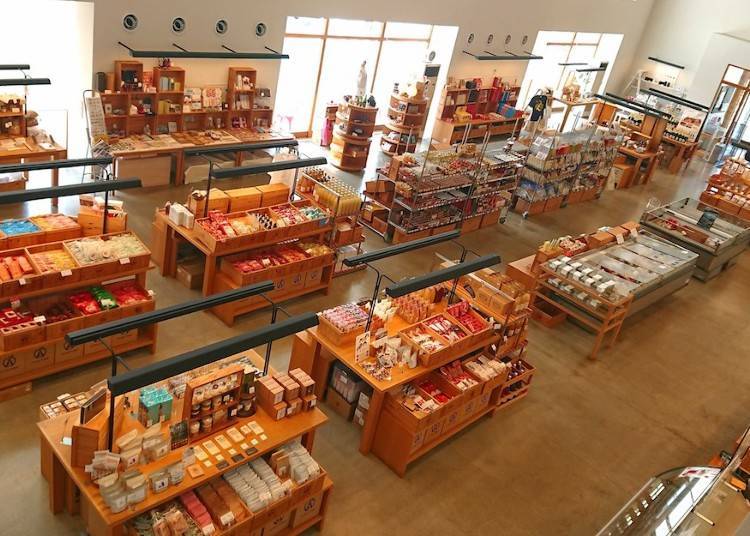 A-FACTORY is a shopping complex right next to Aomori Station that sells local sake, sweets, crafts, and other products. 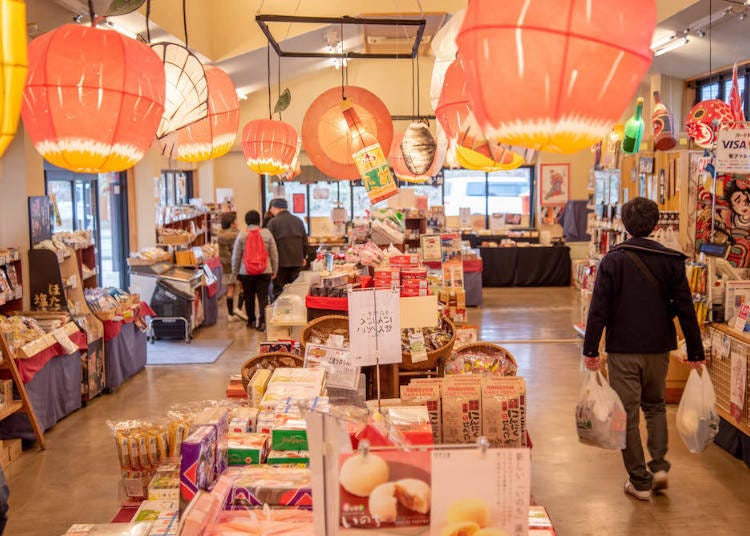 “Tsugaru-han Neputa Village” is an “antenna shop” located in Hirosaki City. In addition to processed agricultural, forestry, and fishery products and sweets unique to the prefecture, it also sells many traditional crafts, including Tsugaru Nuri and kogin-zashi.

Aomori has a multitude of foods and crafts related to its history and culture that make excellent gifts. Keep Gareth’s recommendations in mind when visiting, and be sure you make time to pick up a few unique Aomori souvenirs!

Text by: Tsubasa Shimoda
*The information in this article is accurate as of June 2021. Please check official websites for the latest information.

18 Travel Secrets of Aomori Japan: Guide for Sightseeing, Shopping, and More!
*This information is from the time of this article's publication.
*Prices and options mentioned are subject to change.
*Unless stated otherwise, all prices include tax.