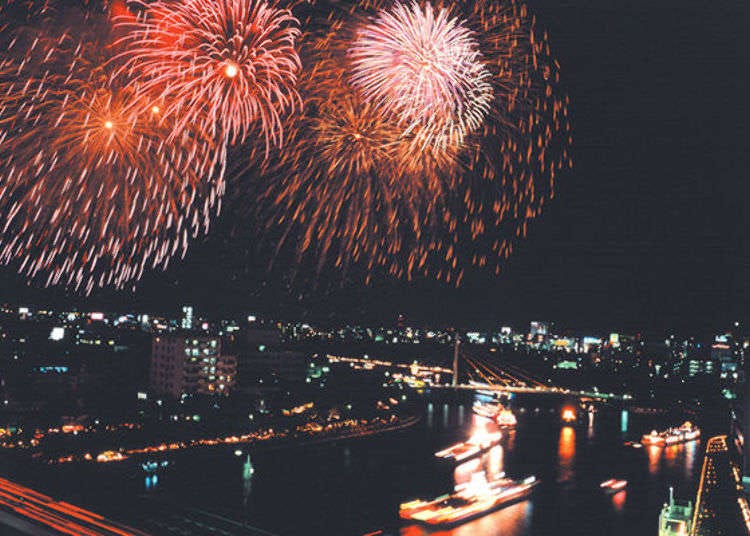 The Osaka Tenjin Matsuri is one of Japan's three major festivals. It’s a month-long celebration of ritual Shinto events held every year from late June onwards, culminating in an exciting climax on July 24 and 25.

A fireworks display is held on the final day, July 25, in honor of the gods. Around 1.3 million people flock to see this event annually. Today we’re going to tell you all about the key things to see and do at the Tenjin Matsuri on July 24 and 25!

The Osaka Tenjin Matsuri dates back over 1000 years!

The Tenjin Matsuri is the collective name for various festivals held around July 25th at Tenmangu shrines throughout the country (shrines dedicated to Sugawara no Michizane, the Shinto god of learning). The festival celebrates the anniversary of Michizane’s death. The most famous of these events is the Tenjin Matsuri held at Osaka’s Tenmangu shrine annually from late June up until July 25. Its history dates right back to ancient times. The festival is said to originate from the Hokonagashi Shinji (now celebrated on July 24), which was first held in 951, a year after Osaka Tenmangu was founded. 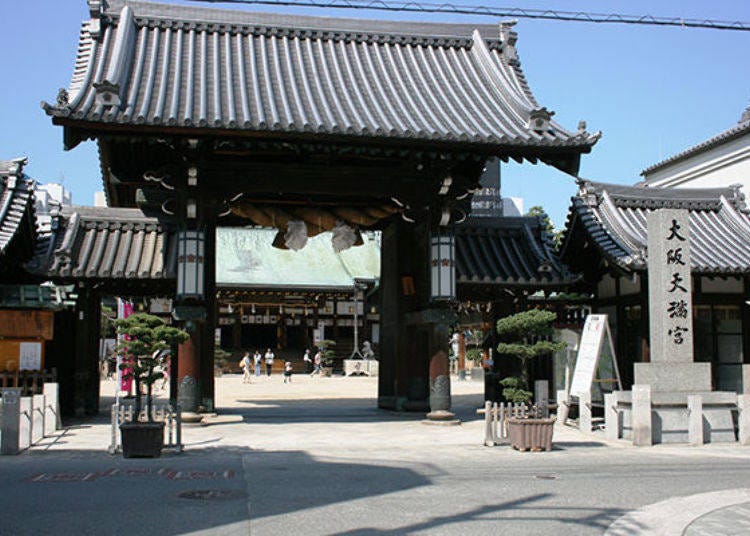 The Tenjin Matsuri reaches its climax over a two day period on July 24th (known as Yomiya) and July 25th (Honmiya). The most popular events of the festival are the honohanabi (display of 5,000 celebratory fireworks) and the procession of a fleet of 100 boats on the Okawa River which flows through the heart of the city. The fireworks vividly lighting up the night sky and the reflections of fires on the boats flickering on the surface of the water make for an impressive sight. 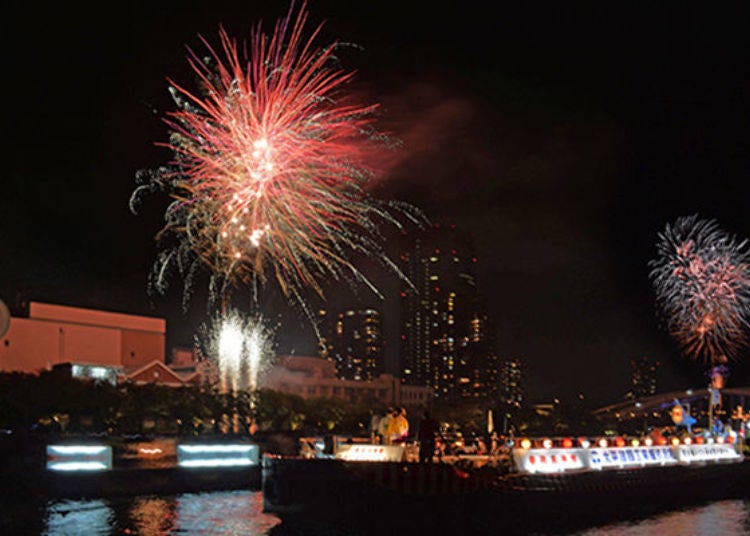 ▲Every year around there is a fireworks display in front of the boats on the river (around 5,000 fireworks in total) (Photo courtesy of Osaka Tenmangu Shrine).

On Yomiya (July 24th) you’ll see shishimai and moyoshidaiko roaming the streets. The highlight of the day is the Hokonagashi Shinji, which is said to be the origin of the Tenjin Matsuri. On the morning of the 24th around 9:00 AM at the Hokonagashi Bridge near the Osaka Central Public Hall the shrine maidens’ minadzukiharae ritual is performed. After this, there is a ceremony in which three people (the shindo (wonder child), shinshoku (Shinto priest) and gakujin (musician)) go out on the Okawa River on a small boat. They throw a sacred plain wood kamihoko (halberd or spear), around 75cm long, into the river.

Originally, the place where the halberd washed up was deemed to be a holy resting place, called the otabisho.The ceremony of escorting Michizane’s divine spirit to the otabisho by boat is said to be how the Tenjin Matsuri started. Now this tradition is carried on in the festival boat procession, known as funatogyo.

Another event also takes place on the 24th on the Okawa River at around 6:30 in the evening. This is the suijotakiginoh, a solemn Noh dance performed on a stage boat anchored near the OAP (Osaka Amenity Park) close by JR Sakuranomiya Station. Before and after the performance, dondoko boats circle around to the accompaniment of noisy shouts, as well as the sound of gongs and drums, whipping up people’s excitement for the festivities and the Noh performances. 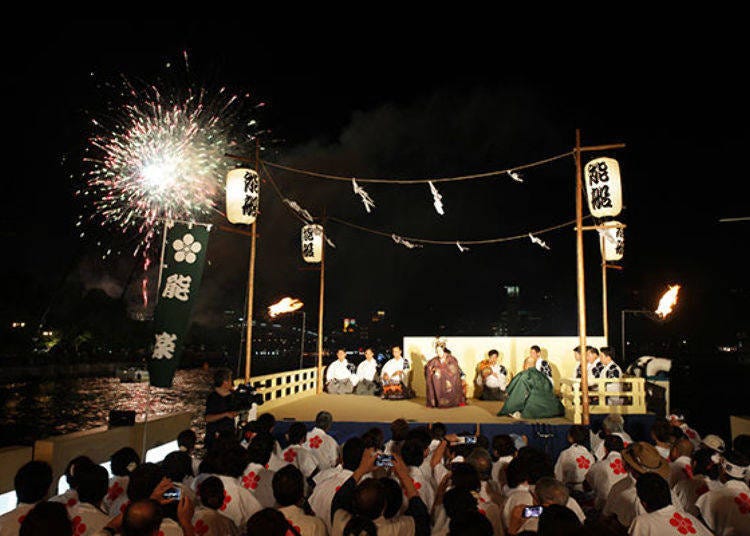 ▲The sounds of musicians’ drums and flutes and cries of “Ha!” and “Iyaa!” echo through the night (Photo courtesy of Osaka Tenmangu Shrine).

This is what the Osaka Tenjin Matsuri is all about! Rikutogyo and funatogyo on Honmiya, July 25

Togyo in this case means a divine procession. This ritual is said to originate from the processions formed by local residents to pray to the god, Michizane, for peace and prosperity. 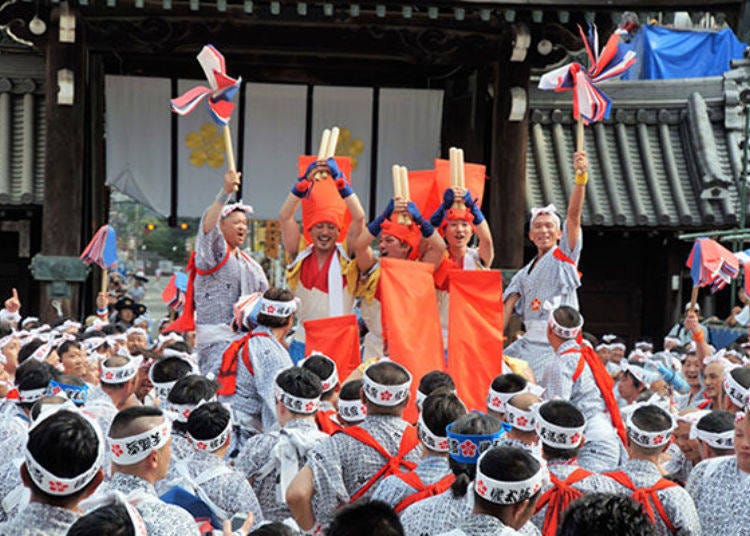 ▲Scene from the rikutogyo. The drummers rock back and forth in their crimson hoods, shouting out, “Chesajaaa!” “Socojaaa!” (Photo courtesy of Osaka Tenmangu Shrine)

The rikutogyo, formed of around 3000 people in brightly colored costumes, leaves Osaka Tenmangu shrine at around 3:30PM and makes the 4km trek to the start point for the funatogyo.

The moyoshidaiko at the head of the procession is well worth seeing. Six drummers in lines of three shout and beat the taiko drum. The taiko platform sways up and down, this way and that, like a seesaw as the bearers roll it along. 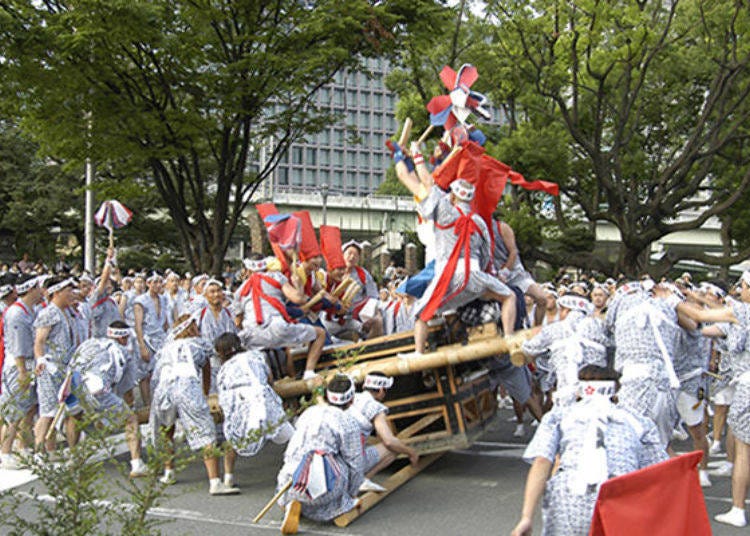 ▲The taiko platform rocks along with logs underneath, moving violently up and down like a fast-moving seesaw. (Photo courtesy of Osaka Tenmangu Shrine)

Dashi (processional floats), mikoshi (portable shrines), kago (sedan chairs), festival maids and children also form part of the procession. Young and old, men and women, all dress up in costumes for the occasion. The air reverberates with shouts and the sound of drums and flutes, like a scene from an old-fashioned picture scroll 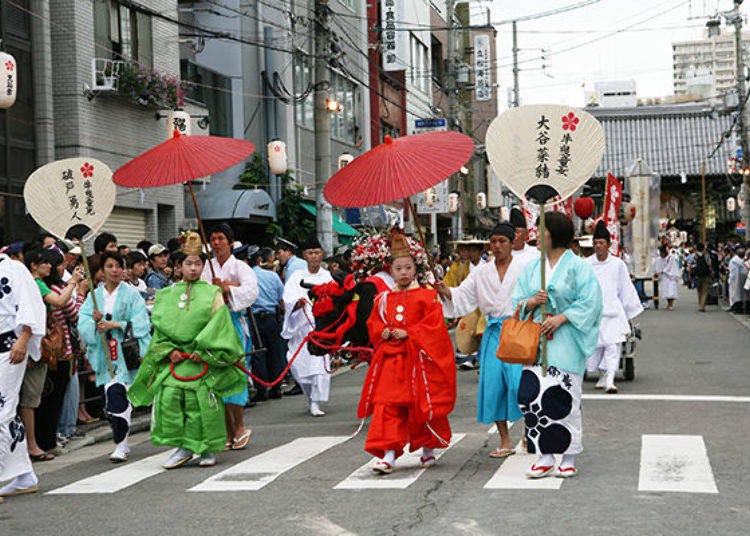 ▲Ushihikidoji leading a bull in procession. Traditionally, bulls are closely associated with the Tenjin Matsuri and Michizane, and this ritual clearly conveys that. (© Osaka Convention & Tourism Bureau) 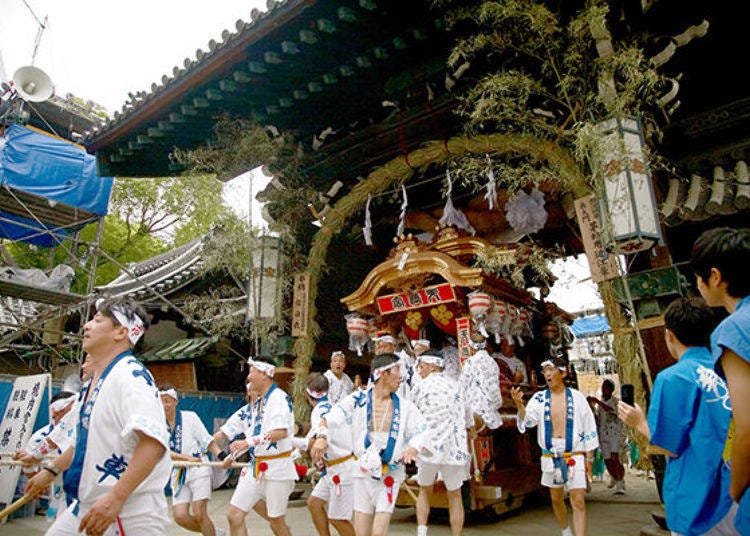 ▲Festival theme music, danjiribayashi, also plays out along with the noise of the drums and the gongs. (© Osaka Convention & Tourism Bureau) 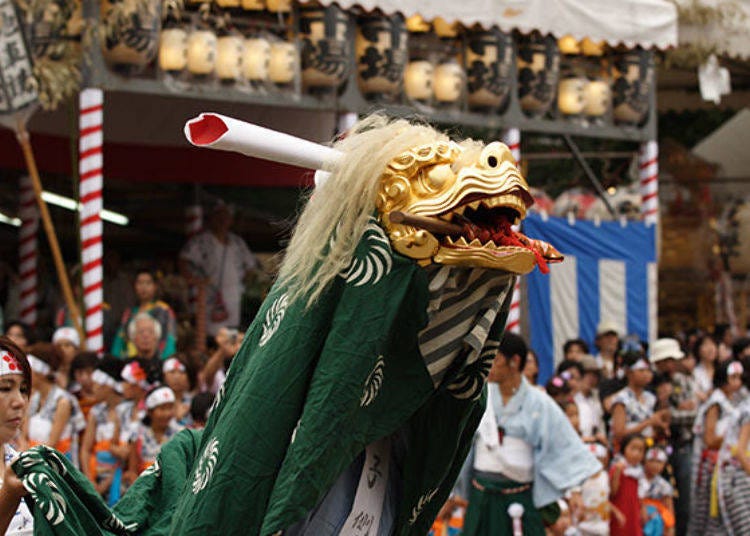 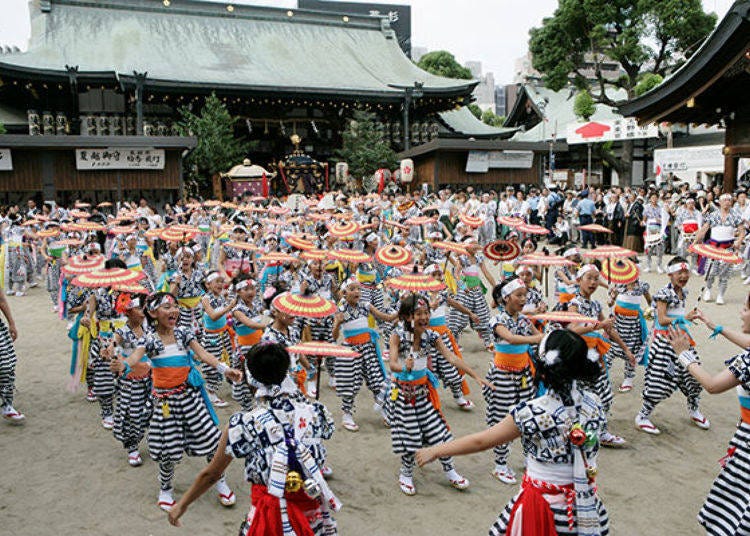 The rikutogyo finishes around 5:30PM as the procession arrives at the pier next to the Tenjin Bridge. Now the funatogyo begins. The participants from the moyoshidaiko board the boats in turn and row out onto the Okawa River. 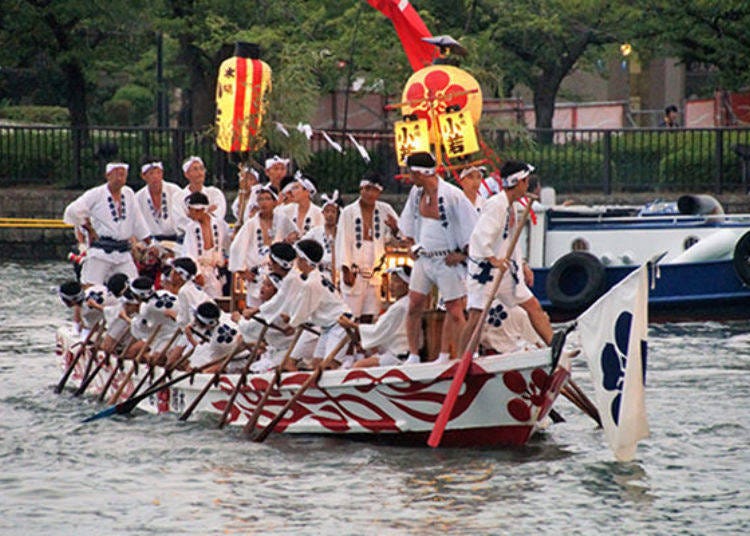 Four different types of boat are used for this procession: the kobourenhoan boat, escorting Michizane’s divine spirit; the gubu boats, carrying those doing the moyoshidaiko and danjiribayashi; the omukae boat (greeting boat), with its adornment of gorgeous-looking puppets, which welcomes the arrival of the boat carrying the divine spirit; and then the hohai boats, hired out by companies or private groups.

As well as these, there are dondoko and rakugo boats (comic storytelling performance) moving back and forth in procession along the bustling river, adding to the festival atmosphere. 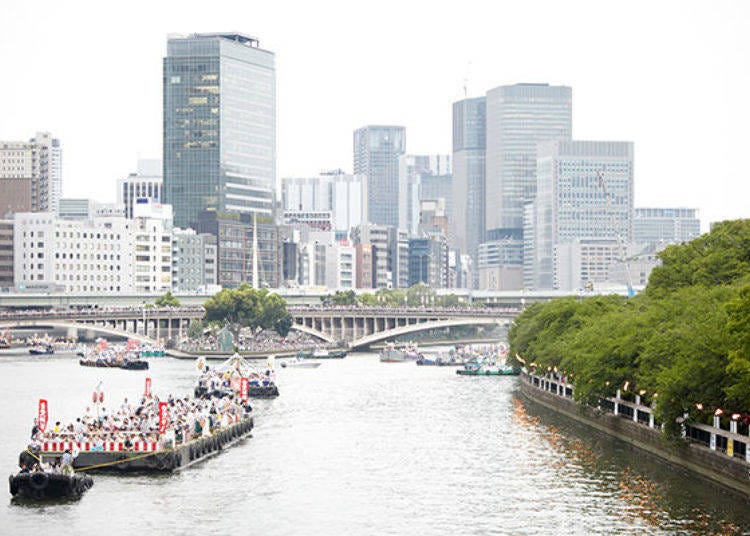 ▲Tourist boats along the river. Some boats can fit around 300 people (© Osaka Convention & Tourism Bureau)

The fleet comes back along the river from Tenjin Bridge up to Miyakoshima Bridge, a short distance upstream from JR Sakuranomiya Station. 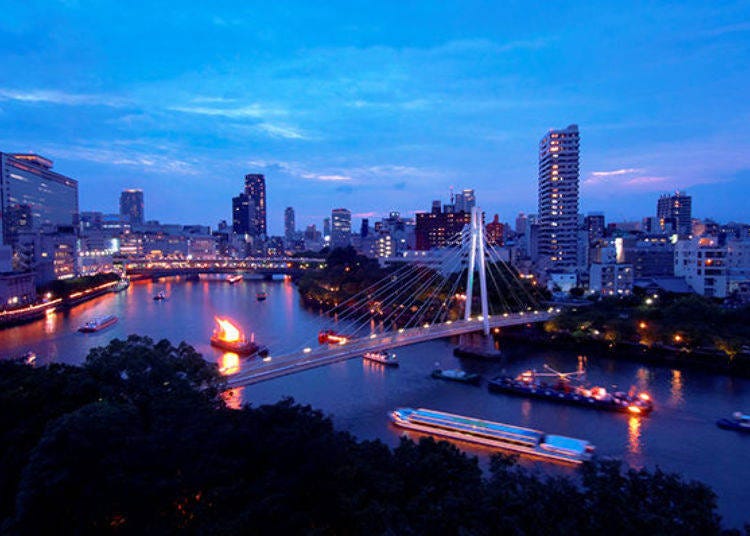 ▲As it gets dark, the bonfires on the boats glow in the twilight (Photo courtesy of Osaka Tenmangu Shrine)

As the boats pass each other, the people on board clap their hands and call out a greeting known as the Osakashime. “Uchimasho” (Clap your hands) Clap! Clap! “Mohitotsuse-” (“And again”) Clap! Clap! “Iotte sando” (Three times!!) Clap! Clap! Clap! These noises from the river are unique. You’ll only hear them in Osaka. It’s well worth listening to them for yourself!

And now finally the Tenjin Matsuri reaches its climax! The Honohanabi (festival fireworks) start at 7:30PM on the 25th. Around 5,000 fireworks are used, including beniume, in the shape of a red plum, which is the original symbol of Osaka Tenjin Matsuri, as well as fireworks in the shape of letters, or specially-made set piece fireworks. Every year around 1.3 million people turn out to watch the funatogyo and the fireworks. 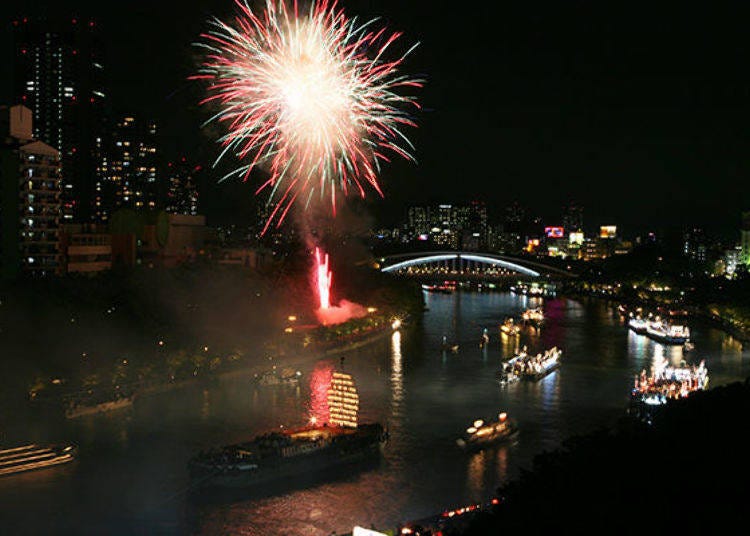 It gets very crowded and difficult to move in the surrounding area from 7:00PM onwards, 30 minutes before the display begins. Traffic restrictions are in force from around 6:00PM for some of the bridges over the Okawa River. Wherever you’re planning to watch the fireworks from, you should try to get there early.

There are two locations where the fireworks are launched: near the Osaka Mint Bureau next to Sakuranomiya Bridge, and at another location slightly up the river near JR Sakuranomiya Station. You’ll find plenty of vantage points around here to see the impressive display. Along the river bank there are lots of stalls, but as you’d expect it does get very crowded. 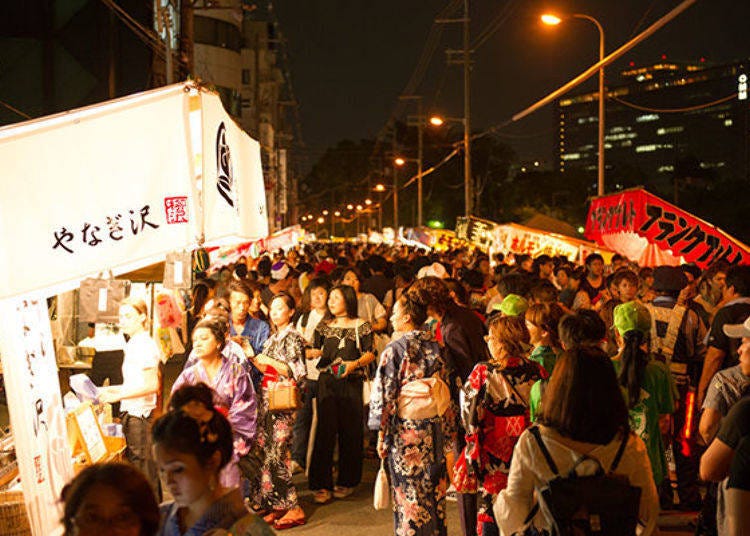 For a good view of both the funatogyo and the fireworks, we’d suggest the area around the Osaka Imperial Hotel on the Okawa riverbank or the OAP Tower & Plaza. If you're lucky you can find a place to sit on the open air steps by the river at the OAP Tower & Plaza. It’s a perfect spot for seeing the display! Otherwise we’d recommend walking up the river from JR Sakuranomiya Station to Miyakojima Bridge or Hisho Bridge.

Alternatively, you can go south to the area on the east side of the suspension bridge, Kawasaki Bridge, or the area around Osakajo-kitazume Station on the JR Tozai Line. You’ll also get a pretty good view of the fireworks from around Miyakojima Ohashi further up the river. 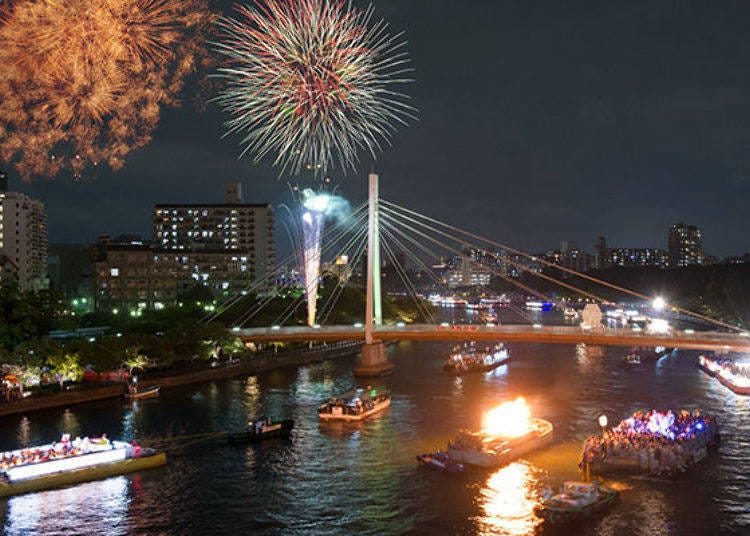 However, if you really want to be sure of a comfortable view without having to worry about finding a place, then your best option is to pay for a spectator seat.

A dedicated viewing area for the fireworks was set up in 2017. Now you can enjoy the spectacle while sitting on the specially prepared sandy beach by the river or at a seat with a table. Seating in the stands at Sakuranomiya or Tenman Bridge is also very popular because you get a close-up view of both the fireworks and the funatogyo. For more information on tickets for the spectator seats, see the Tenjin Festival general information site. 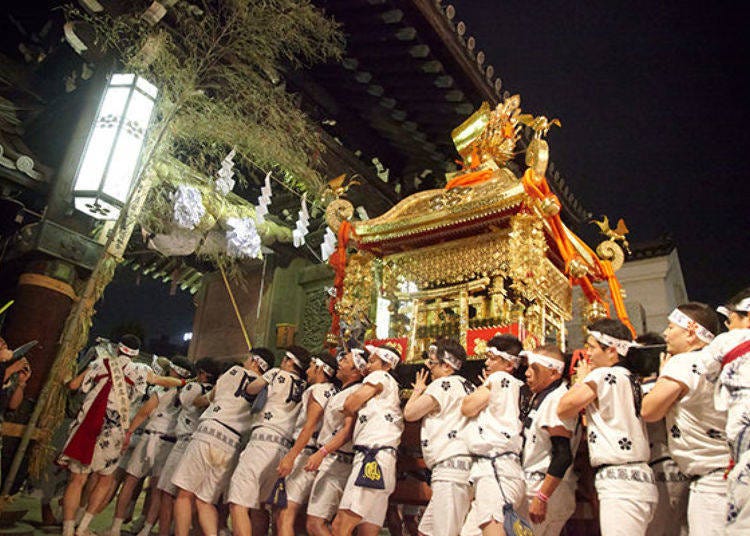 ▲When the funatogyo is over, the procession heads back to the Tenmangu Shrine. <©Osaka Convention & Tourism Bureau)

The fireworks finish at around 9:50PM and the funatogyo finishes at 9PM. Then, from 10PM onwards, the final event of the festival, the kangyosai (return procession) takes place. Michizane’s divine spirit is returned to the inner shrine, and with that, the month long Tenjin Matsuri festivities come to an end.

We’ve only focused on the events of a two day period, but there are plenty of other colorful, awe-inspiring and magical things for you to see! Which events interest you the most?

So much to see! How to get the most of the Osaka Tenjin Matsuri

Now we’ll tell you how to get the most out of the Tenjin Matsuri. Since this is a Shinto ritual, the general public can’t go on the festival boats in the funatogyo. However, there are plenty of tours available if you want to watch the fireworks in style from a boat on the river. 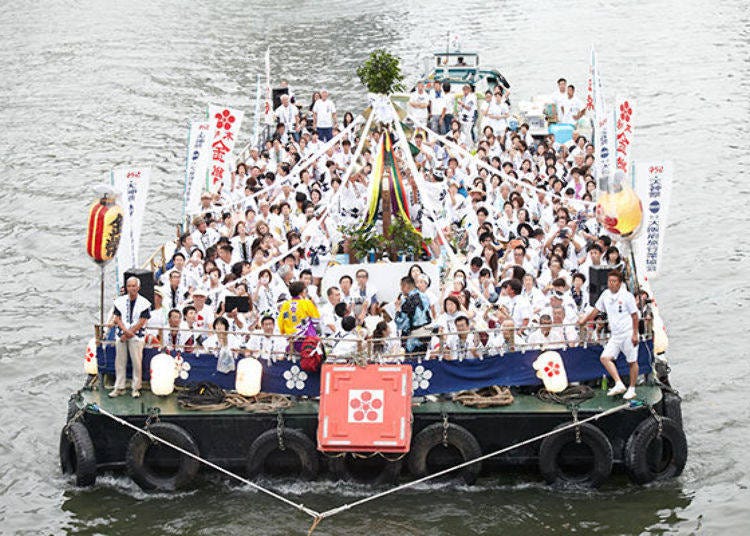 For instance, there are tours leaving at 5PM that feature an unagi bento meal and unlimited draft beer or soft drinks; or tours with a rakugo performer who tells stories about the festival to help you appreciate it more fully.

The tours are sold by OATA (Osaka Agency of Travel Association) and various travel companies. Check the Tenjin Festival general information site for all the details. 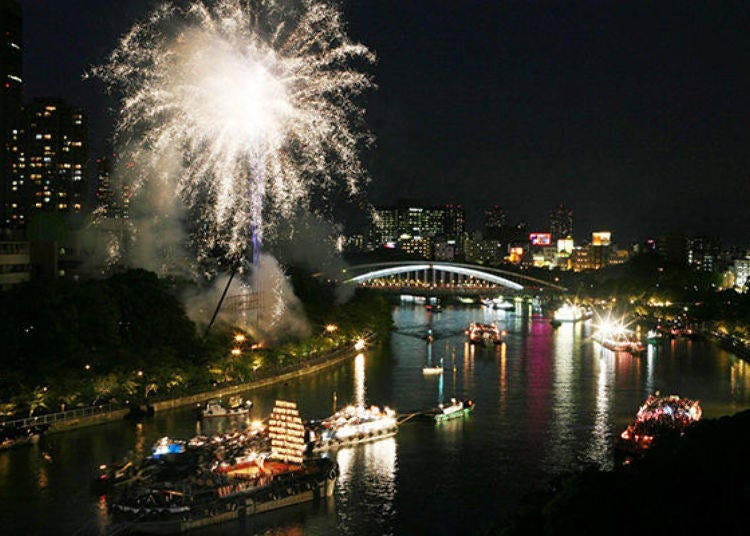 During the festival, there is even a women-only mikoshi, the Tenjin Matsuri Josei Omikoshi (Women’s Mikoshi), which was started in 1981 as an initiative to add some extra color and variety to the festivities. It’s commonly known as the “girls’ mikoshi” and it parades vigorously up Tenjimbashisuji Shopping Street and around Tenmangu Shrine on July 23. The sight of these ladies in their happi coats belting out their chants is thrilling and uplifting.

Seeing this gets you in the mood for the summer festivities and makes you feel like wearing a yukata yourself, doesn’t it? There are plenty of places in Osaka near the festival venue where you can rent a yukata for the event.

The colorful fireworks over the river and the bonfires on the boats make the Tenjin Matsuri a stunning event. It’s a dazzling and stirring spectacle that really conveys the 1000 years of history behind the event. It is one of Osaka’s great summer traditions. Now that you’ve read all about it, why not visit and see it for yourself?