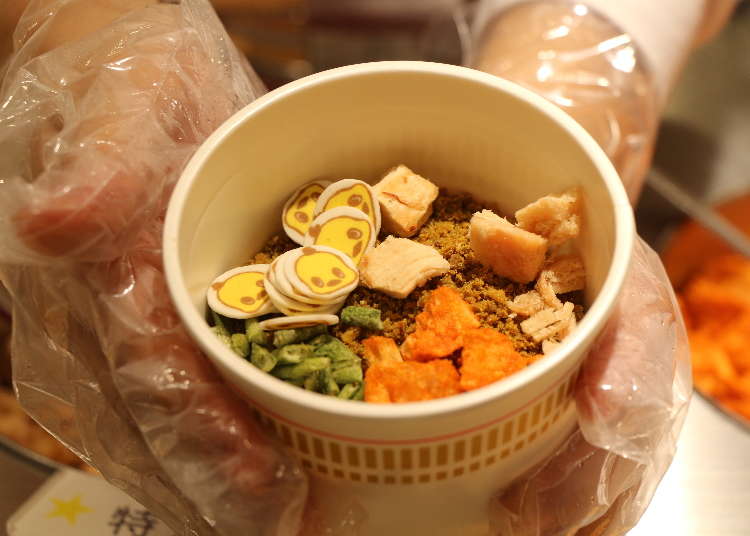 We Visit the World-Famous CUPNOODLES MUSEUM - And Make Our Own Original Cup Noodles!

In the birthplace of instant chicken ramen, there is the CUPNOODLES MUSEUM Osaka Ikeda. From the first chicken ramen ever made to the creation of “Space Ram”, instant ramen eaten by astronauts in outer space, and the cup noodles that have taken the world by storm, you can enjoy learning about the history of cup noodles.

At the “My Cup Noodles Factory”, you can even make your own original cup noodles! 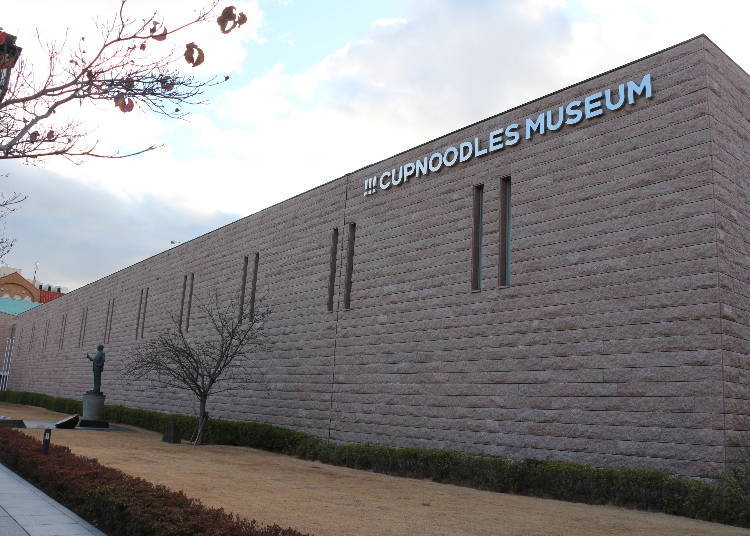 What kind of place is the CUPNOODLES MUSEUM? 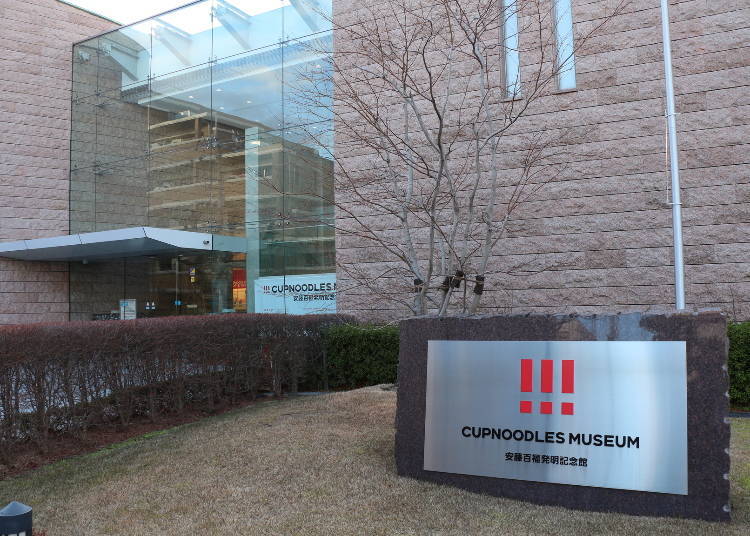 Andō Momofuku, the inventor of instant ramen, created the world’s first cup noodles, and became the founder of Nissin Foods. Ikeda City in Osaka, the birthplace of cup noodles, CUPNOODLES MUSEUM Osaka Ikeda was started in 1999 to detail the invention of instant ramen, with the hopes of spreading the message that everyone has the chance to be an inventor.

The museum is five minutes by foot from the Hankyu Takarazuka Line’s Ikeda station, which is 20 minutes away from Osaka Umeda station.

When the museum first opened in 1999, there was only an exhibition room, with two seminar rooms offering an appointment-only 90-minute chicken ramen-making workshop.

To accommodate visitors who wish to just browse through the exhibits, the museum reopened in 2004 after a renewal, featuring twice the amount of space, as well as the opening of the “My Cup Noodles Factory”.

With stationery provided for you to design your own cups, you can make your own unique cup noodles. Though no appointment is required, it can get crowded on weekends and holidays, so be sure to plan with time to spare if you would like to try it out. (300 yen per cup, 400 yen from April 1, 2020) 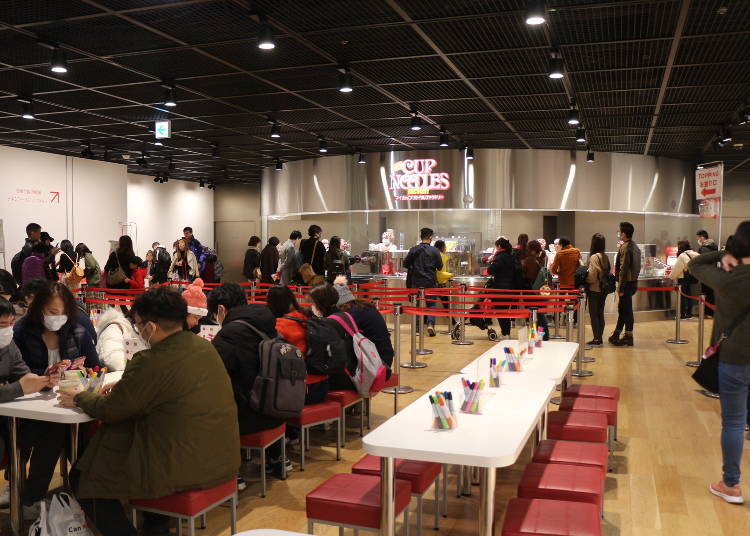 Markers are provided at the tables, allowing you to draw and write on the cups to create your own, unique cup. As there’s a space provided to write the date, don’t forget to fill it in. The cup noodles are good for a month after being made.

After you’ve finished designing your own cup, the next step is to make the actual cup noodles. Besides Japanese, the route has signs in both English and Chinese (simplified) as well.

The noodles are inserted into the cups! 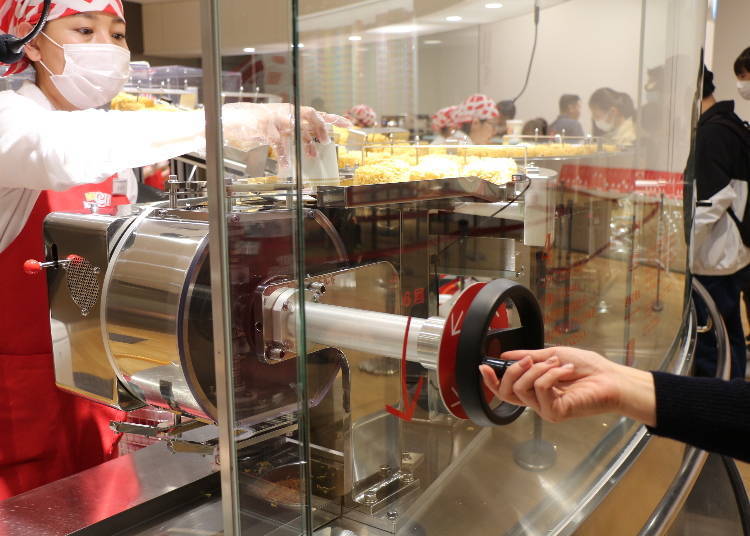 First, noodles are inserted into the cups. After passing your cups to the staff, they will set your cups on top of the noodles, and you spin the handle of the setting machine to push the noodles into your cup. 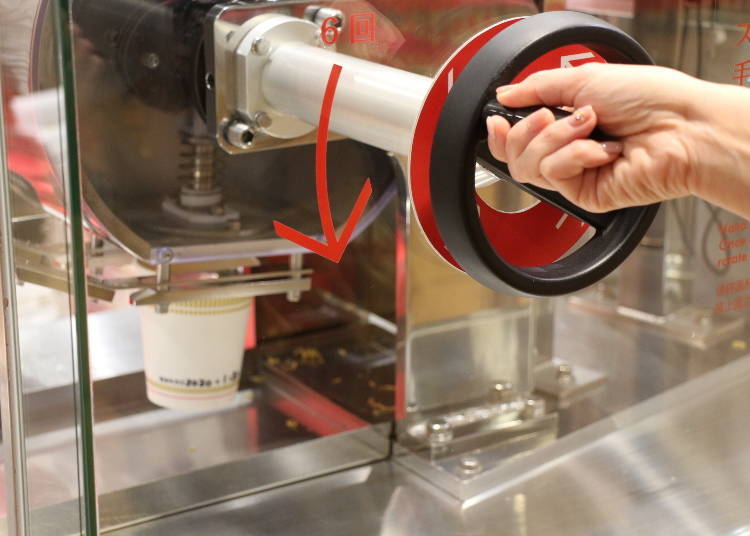 After six turns, you’ll hear a bell chime, which is when you stop. 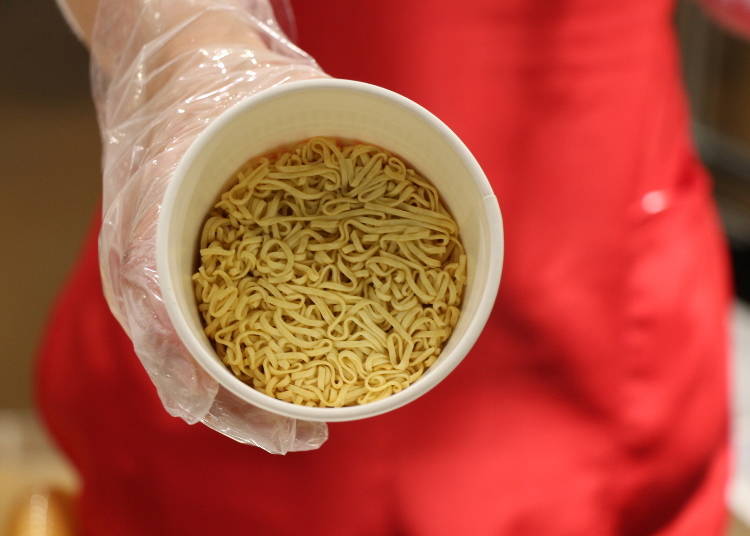 The noodles are set perfectly into the cup.

Select your soup and toppings! 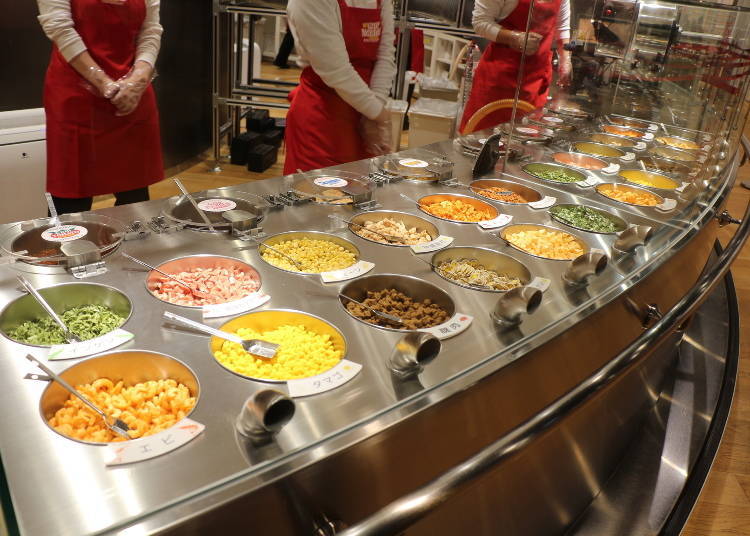 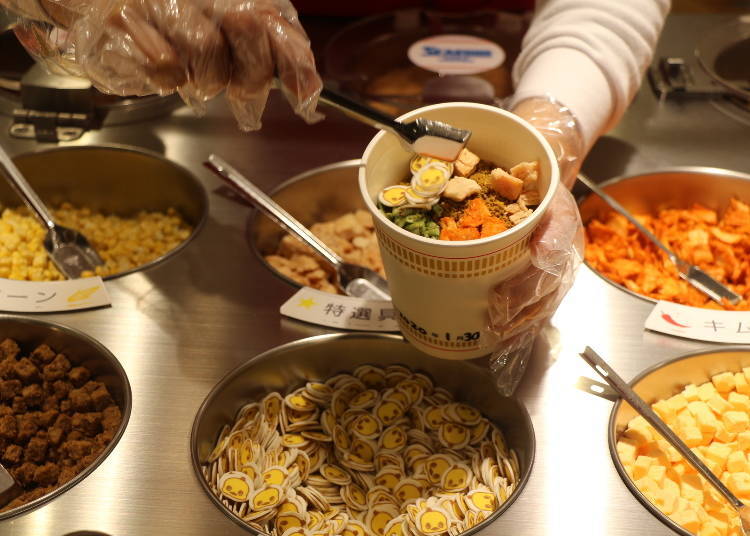 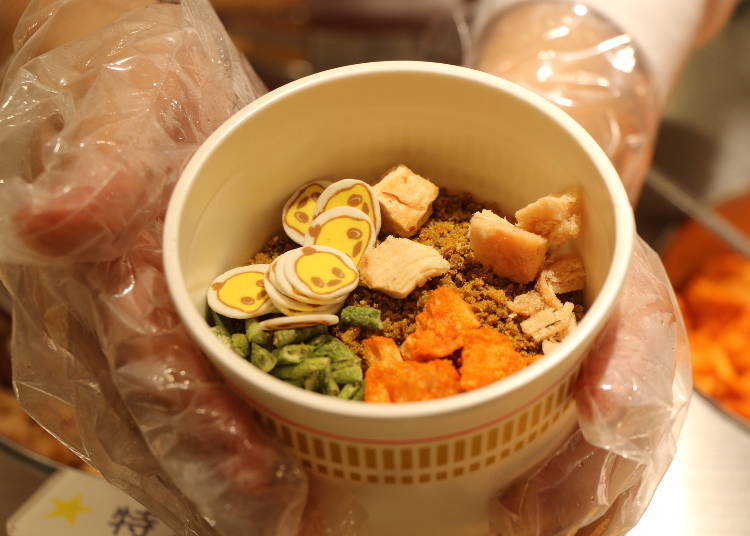 Next, you pick your soup base and toppings. There are four soup bases available: original, curry, seafood, and chili tomato, and you can pick any one of the four.

Toppings include prawn, garlic chips, cheddar cheese, fish cake in the shape of the museum’s mascot “Hiyoko-chan”, pork and soy meat cubes affectionately called “mystery meat” by fans, and various vegetables, along with special limited-edition toppings that change every month or two.

There is a total of twelve types of toppings to choose from, and you can pick up to four of them. There are 5,460 combinations of soup and toppings possible!

As we had trouble making up our minds, we went with a combination of curry soup, kimchi, green beans, and the limited edition topping, charcoal-grilled chicken.

Of course, we also had to include the popular and adorable Hiyoko-chan fish cake. We had no idea how it would turn out, but we looked forward to eating it.

As your eyes flit between the different choices available, do pick out the soup and toppings that you would like to eat. This is the setting for the creation of your own original cup noodles.

Just a little more until the creation of your very own “My Cup Noodles”! 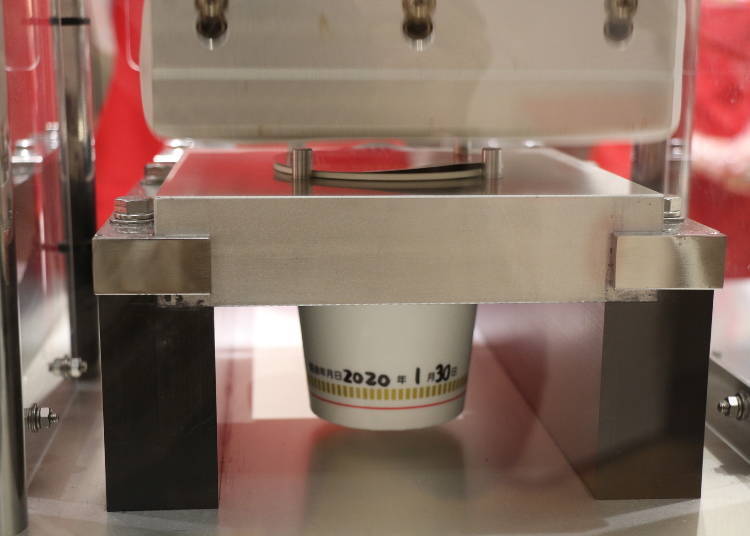 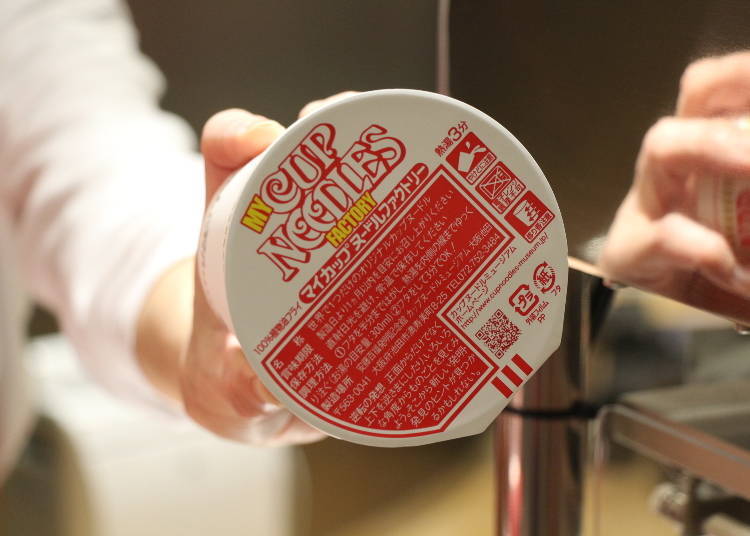 Next is the sealing of the cap. After setting your cup into the machine, you can see the familiar cup noodle cap with “My Cup Noodles Factory” printed on it sealed onto your cup. It’s almost ready! 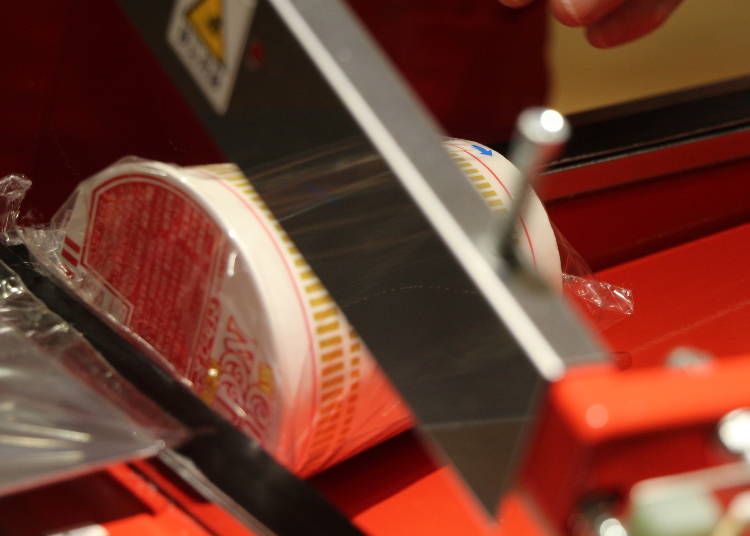 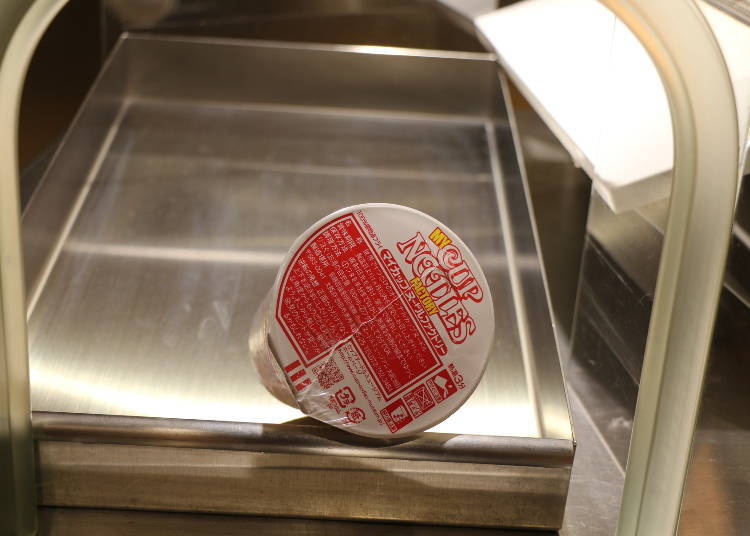 After going through the machine that blasts hot air at the cup, the cup is vacuum-sealed. It looks just like the cup noodles sold in shops!

A special air package for your “My Cup Noodles”! 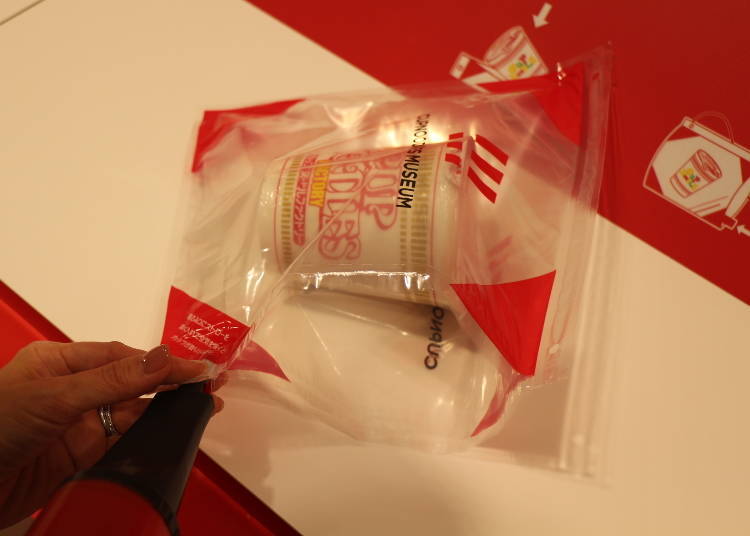 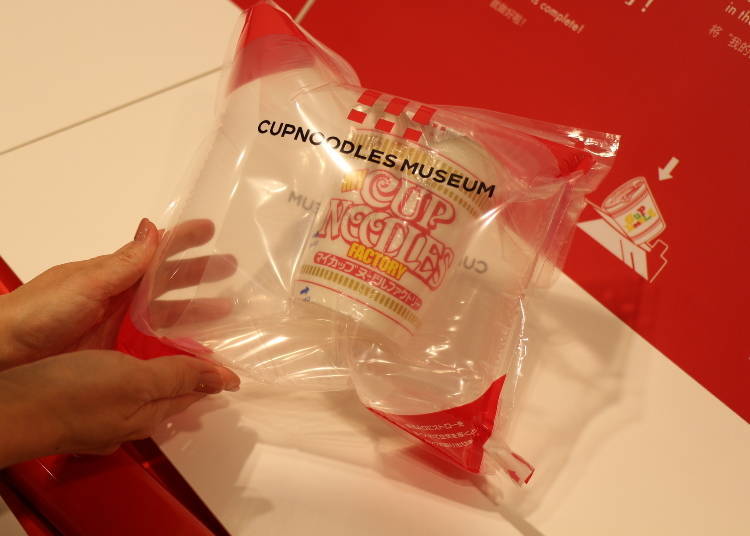 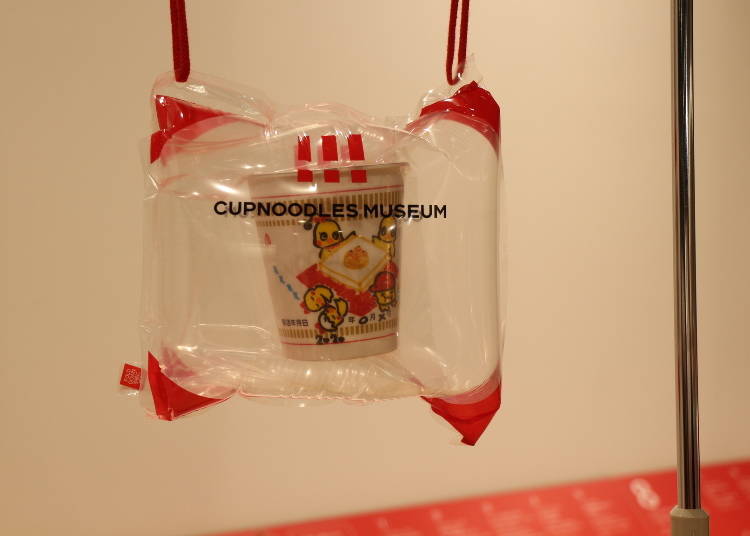 Once you’ve received your completed “My Cup Noodles”, insert it into the air package and pump it with air. The package inflates to hug the cup snugly. With that, you’ve created a unique, one-of-a-kind “My Cup Noodles”!

Though the “My Cup Noodles Factory” is the most popular, there are other workshops and experience zones where you can learn more about cup noodles and instant ramen. In CUPNOODLES MUSEUM, there are many detailed exhibits on display, so be sure not to miss them out!

Follow the history of the world’s first instant ramen 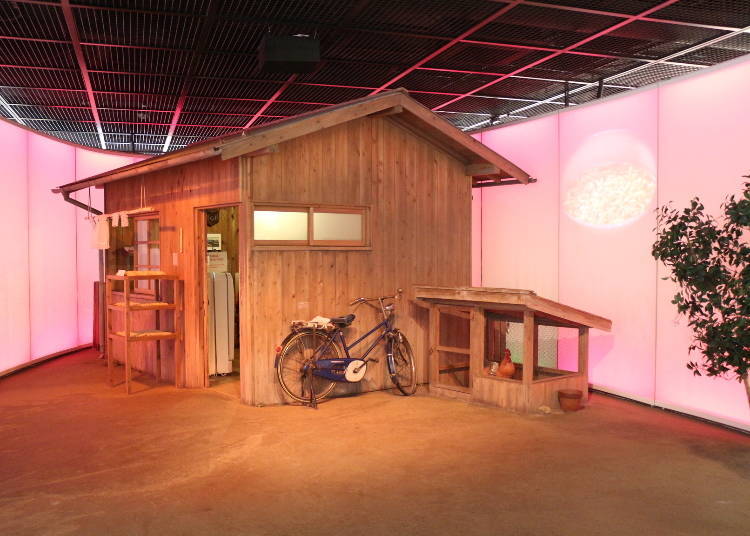 Andō Momofuku invented the chicken ramen in a small shed at his home in Ikeda City in Osaka. A life-sized replica of the shed is on display as “The Birth of Chicken Ramen”. You can watch a video about it on the monitor right in front of the shed.

The world’s first instant ramen, “chicken ramen”, was invented in this tiny room with no special tools nor equipment. Momofuku was passionate in his belief that with just an idea, you can invent something which changes the world, and you can feel that statement resonate in this tiny shed that he used as his laboratory. 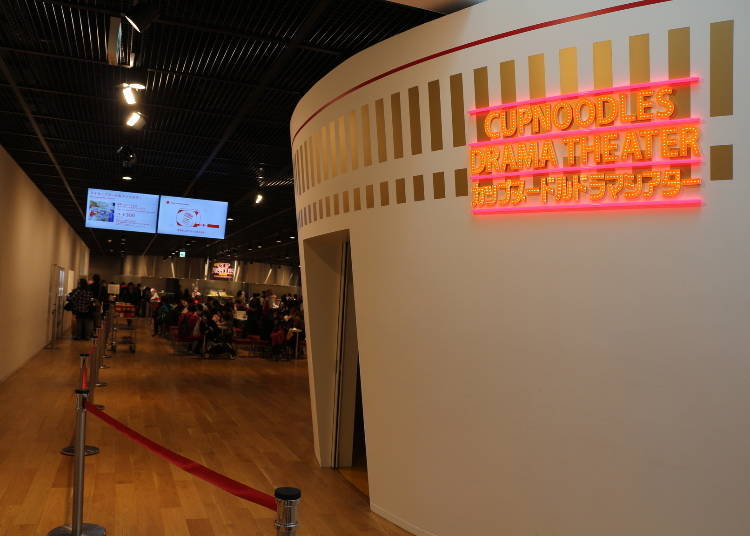 On the monitor in front of the shed, there is a cartoon series showcasing the invention of instant ramen, and its production process, called “Cup Noodles Drama Theater”, and it comes with voice guides in both English and Chinese. Voice guides can be rented from the reception counter (a deposit of 2,000 yen is required).

On top of this, if you check-in at “CUPNOODLES MUSEUM Osaka Ikeda”, you can listen to explanations in both English and Chinese on a smartphone application. You can find out more details from the reception staff. 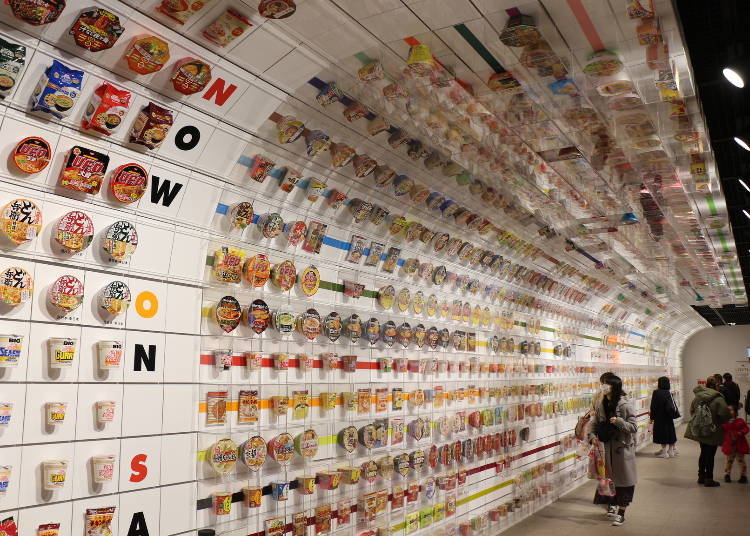 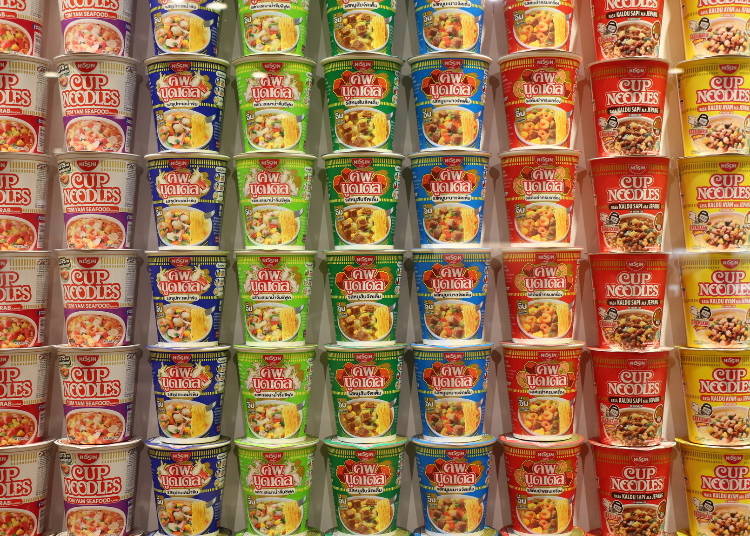 Cup Noodles of the World

The “Instant Ramen Tunnel” showcases the history of instant ramen over the years through various types of ramen packaging, starting from the very first “chicken ramen” in 1958.

Nostalgic packaging designs are on display, and anyone regardless of age can enjoy it.

“Cup Noodles of the World” features a giant wall with cup noodle and instant noodle packaging from all around the globe. It’s a hot favorite amongst visitors from other countries. 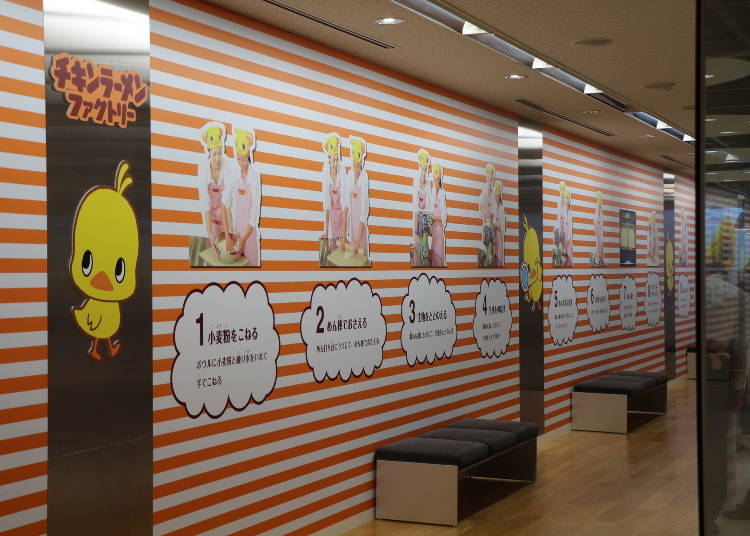 The “Chicken Ramen Factory”, which has been around since the museum first opened in 1999, is on the second floor. You can try everything from kneading the dough to drying the noodles.

From making the chicken ramen yourself, you can have fun while learning more about the noodles. Reservations can be made online via their homepage or by phone. 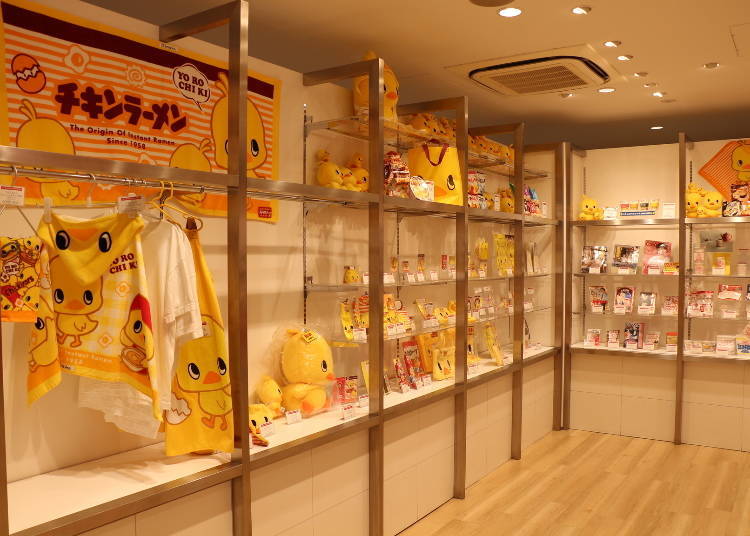 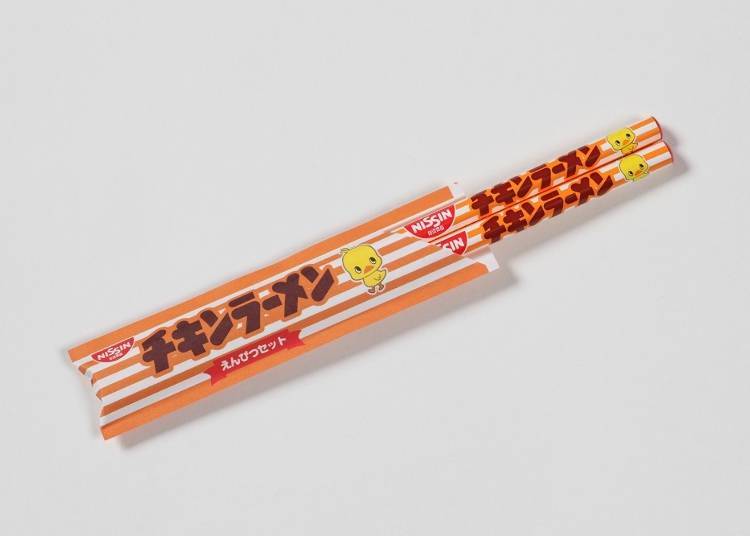 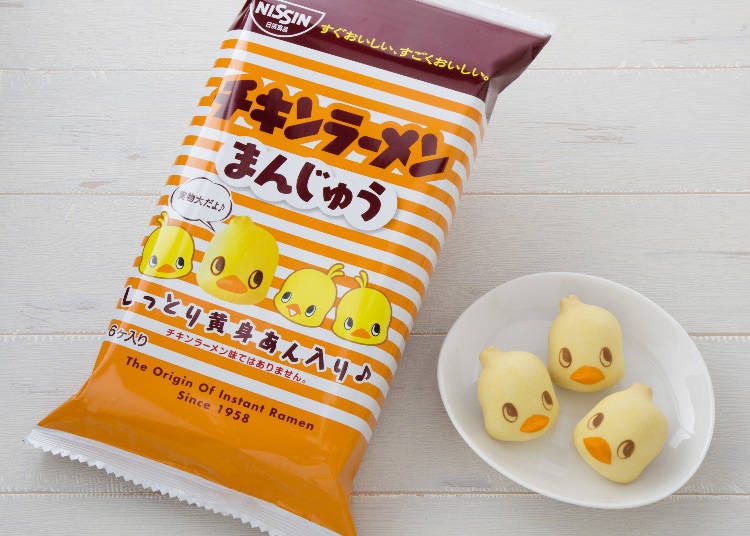 After trying out a few workshops and viewing the exhibits, you can head down to the museum shop at the entrance hall.

Souvenirs such as pencils, designed to look like chopsticks with the chicken ramen design (one pair of pencils for 100 yen) and the adorable manjū buns in the shape of the mascot Hiyoko-chan, “Chicken ramen manjū buns” (a box of 8 for 900 yen), are on sale.

Region-specific ramen and other hard-to-get items are on sale as well, with a wide variety of souvenirs on sale. 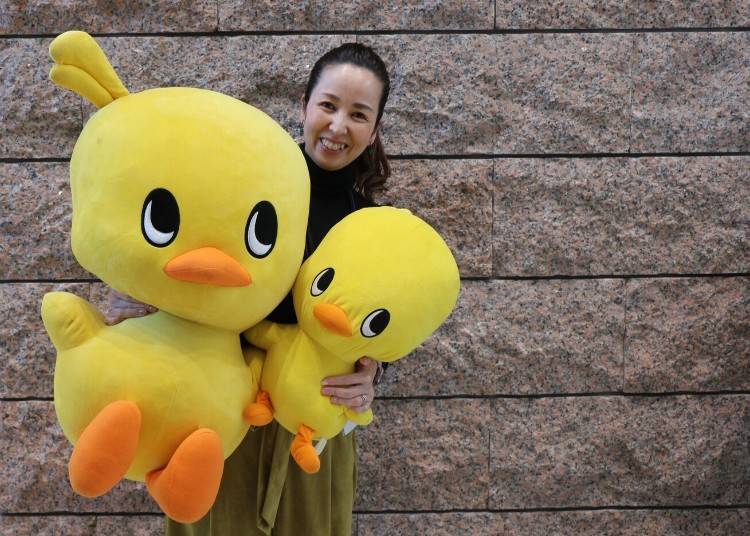 On top of this, there are giant plushies of Hiyoko-chan that you can borrow to take photos with, so be sure to check with staff about it!

Despite its humble origins from a simple shed, the first chicken ramen has come to be loved all over the world as cup noodles. To learn more about its history and impact on us and society, be sure to visit CUPNOODLES MUSEUM Osaka Ikeda.