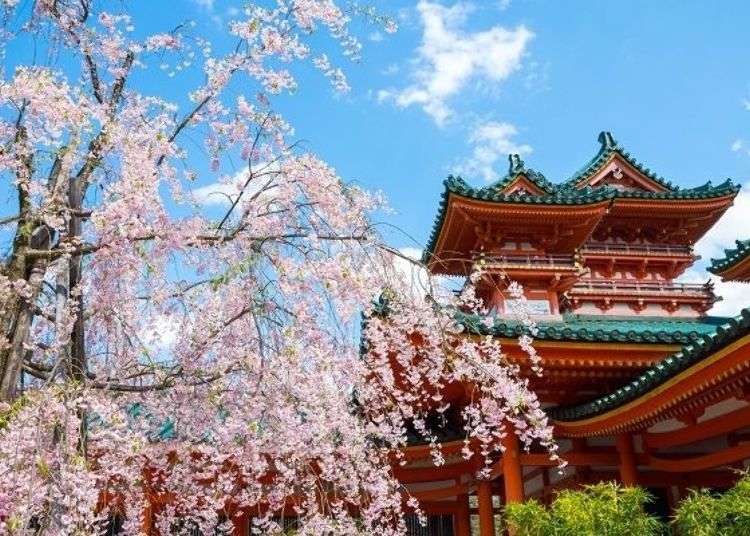 Heian-jingu Shrine: Visiting One of Japan’s Most Beautiful Shrines and Gardens

With the 1100th anniversary of the return of the capital to Heian-kyo (Kyoto) the Heian-jingu Shrine was built. On the large property, they have built a shrine that replicated the palace reception compound and constructed a garden using landscaping technology cultivated over a long history. A perfect shrine to enjoy one of Kyoto’s gorgeous gardens.

Seeking to Revitalize Kyoto, the City of Heian Returned to Modern Times 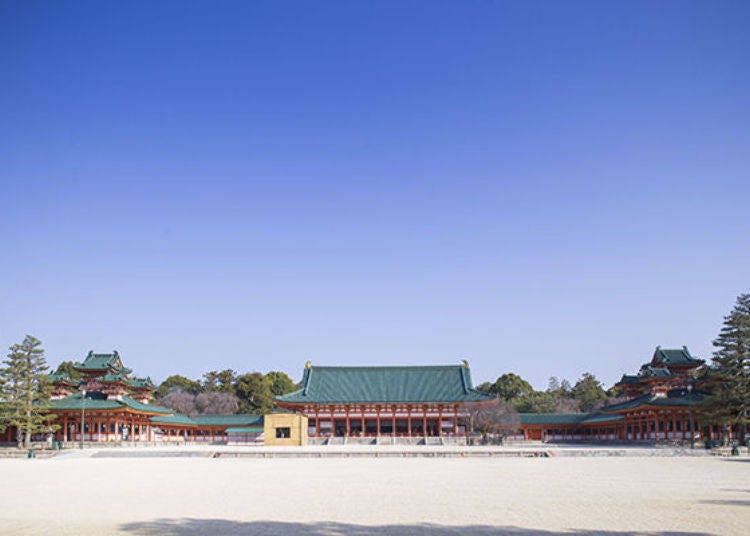 Heian-jingu Shrine was built in 1895. It is relatively a new shrine compared to the other temples and shrine in Kyoto with a long history.

At the time when the shrine built, the city of Kyoto was in ruins due to the fighting in the end of the Bakumatsu period. Also with the Meiji Restoration the capital was moved to Tokyo, and devastated the spirit of the people of Kyoto.

In such time, the residence of Kyoto and people around Japan wanted to bring back the Kyoto to its former glory. With this on the 1,100th anniversary of the return of the capital to Heian-kyo they built the Heian-jingu Shrine as a symbol of rebuilding Kyoto. 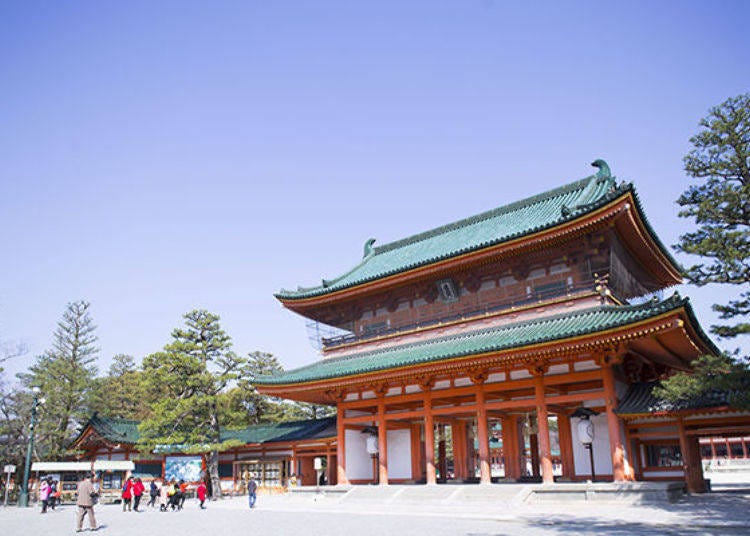 When visiting Heian-jingu Shrine you will first go through Otenmon, the main gate. Heian-jingu Shrine is a 5/8 scale replica of the Chodoin, the palace reception compound of Heian-kyo. The Otenmon is the main southern gate of the Chodoin.You can see how big it is compared to the people in the picture, and this is just 5/8 of the original size. I was quite surprised at the scale of things in the ancient city. 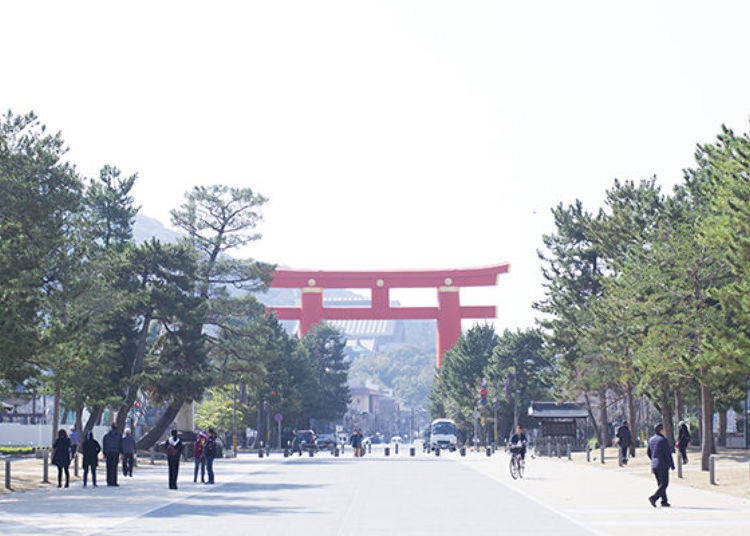 Looking back form Otenmon, there is a huge torii (shrine entry gate) 300 meters back. This was built in 1929 to commemorate the enthronement of the Showa Emperor that occurred in 1928. This large vermillion torii is one of the largest in Japan. 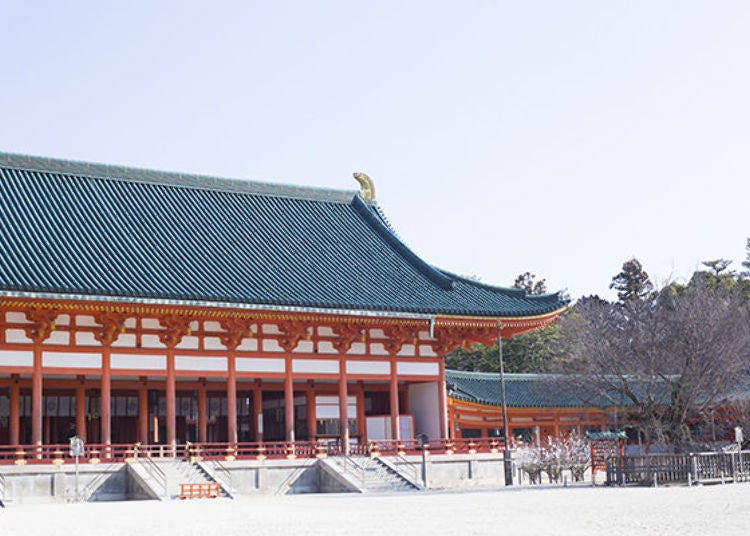 After going through the Otenmon you will see the Daigokuden to the front. This is the main temple of Chodoin. During the Heian Period this was the center of the nation where important ceremonies such as enthronements and New Year’s greeting ceremony were conducted. Now it is a nationally designated important cultural property. Daigoku refers to the universe itself and the origin of all creation. It is compared to the North Star which is a fixed guide and a place where the Emperor stays.

Within Daigokuden is the inner sanctuary and the main sanctuary. Make sure to make a prayer before entering. The proper way of making a prayer in Shrines is bow twice, clap twice and bow again. 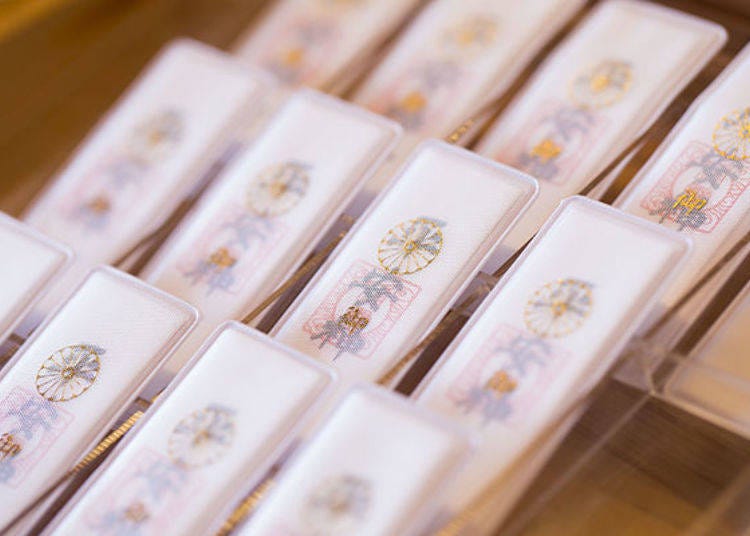 After your prayer make sure to check out the various good luck charms at the designated area. Here are some of the popular charms at the shrine. First is the mi-mamori, it is a charm for good health and recovery from illness. 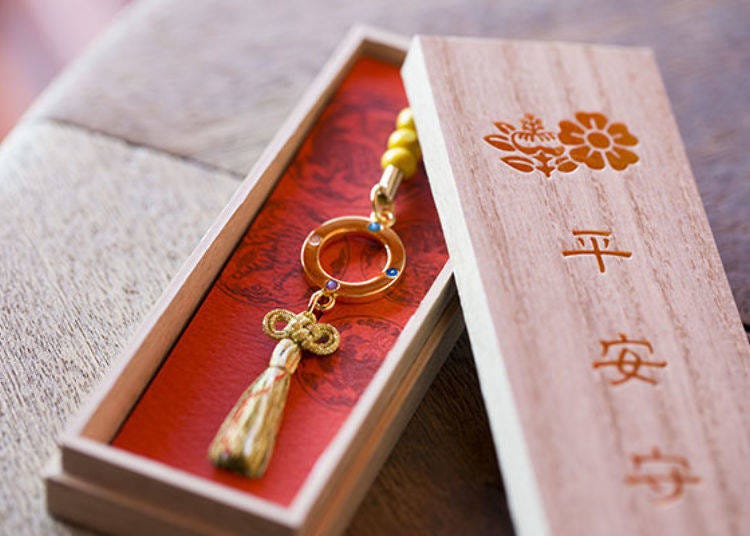 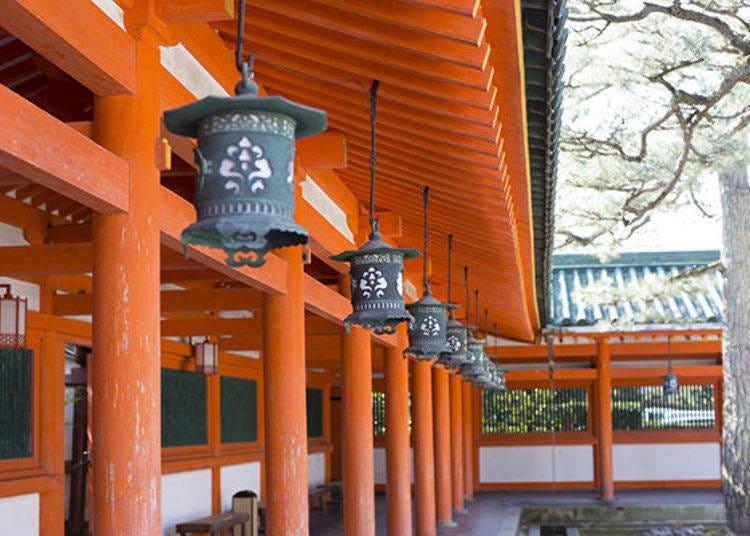 Tsuri-touro are the lanterns that are hanged along corridors from Daigokuden and Otenmon. The images of the four gods are on these lanterns. These lanterns were offered to the shrine for the victory of the Russo-Japanese War in 1905. There are 145 hanging lanterns on the shrine grounds. 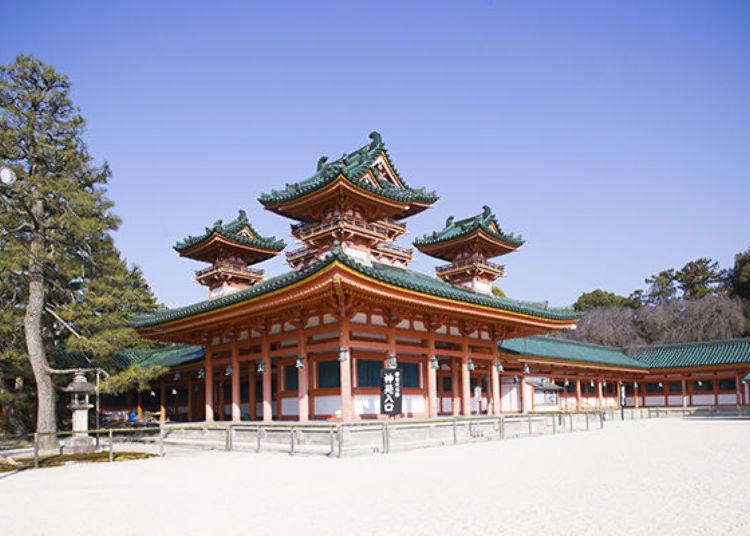 Soryu-ro (Azure Dragon tower) and Byakko-ro (White Tiger tower) are towers located to the east and west of the Daigokuden. These were built at the same time as the shrine and both are nationally designated important cultural properties.

Byakko-ro, seen in the picture, is the entrance to the famous sight Shin-en (Garden of the Gods). After paying the entrance fee, we entered the garden.

The Heian Jingu Shin-en is made up of 4 gardens to the north, south, east and west of the shrine. The total area covers 33,000 square meters. The creation of the shrine was conducted by Ogawa Jiehi VII from the Meiji period to Showa period. He was commonly known as Ueji and created gardens such as Maruyama Park in Higashima neighborhood in Kyoto.

The west and central Shin-en were created when the shrine was built. It is a beautiful scenery with Higashiyama to the back and incorporating water drawn from Lake Biwa. It is a large manmade garden, however with the passing of 100 years it has become an environment with many living creatures. 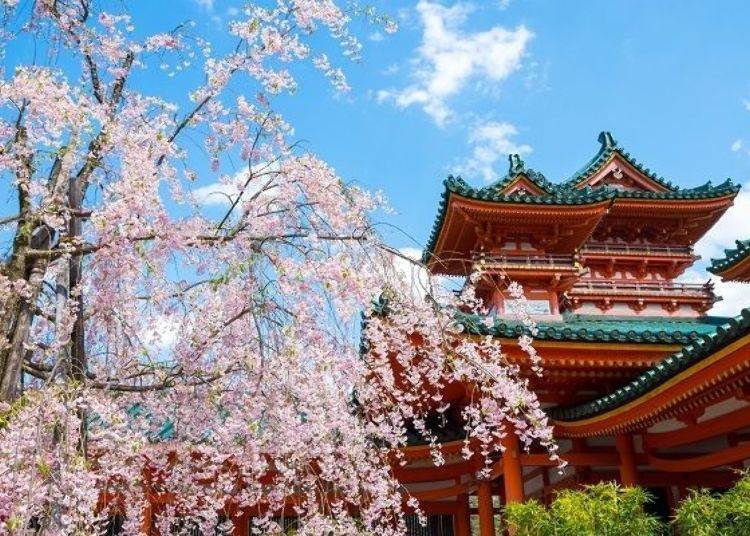 The south Shin-en right by the entrance is also called Heian no Sono and is known as a great place to view Yaebenishidare cherry blossoms. When we visited in March 20, 2018, it seemed like the cherry blossoms just started to bloom. You can see the beautiful full bloom in the picture. 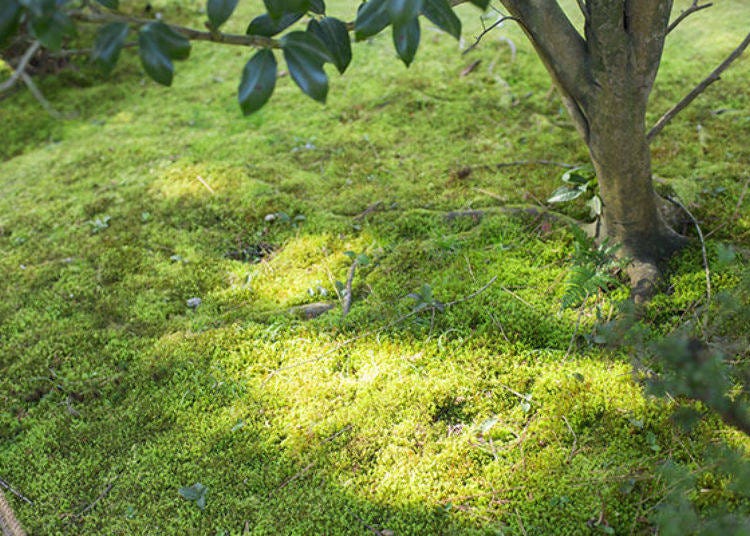 ▲Koke-musu Teien (moss garden). Especially beautiful when the sun peeking through the branches

The south Shin-en was created in 1969. It was created with paths and narrow streams that were used in the Heian Period. It feels like you are actually walking through the countryside.

In 1981 they planted about 180 plants that were in Heian Period literary works such as The Tale of the Bamboo Cutter and The Pillow Book. As it reflects the era when the emperor ruled directly, it was given the name Heian-no-Sono. 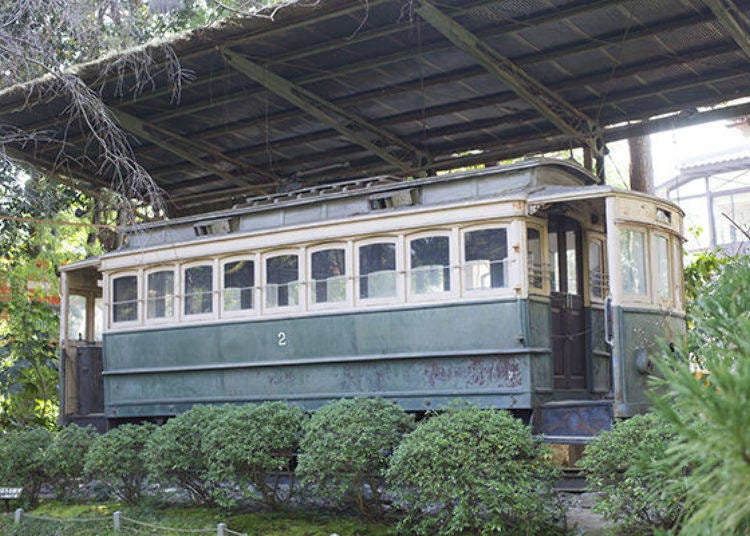 The oldest train (later model) in Japan by Kyoto Denki Tetsudo, which started operation in 1895, the same year the shrine was built. It was donated from Kyoto City and is preserved and on display in south Shin-en. 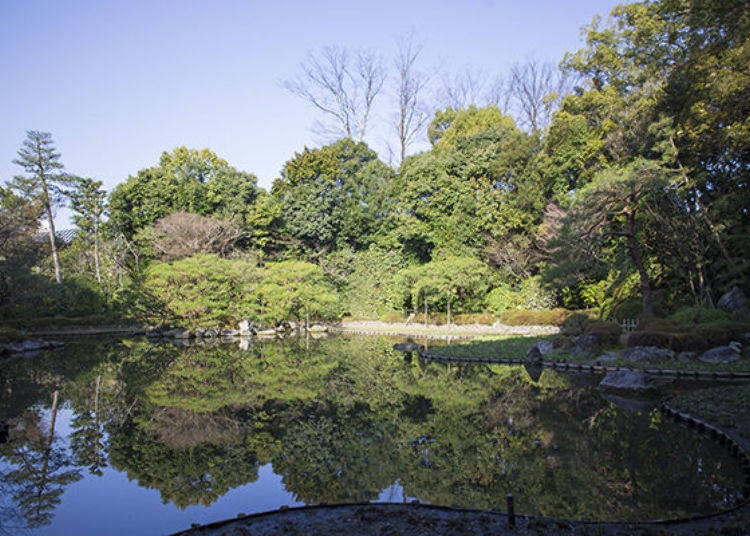 Going down the path from south Shin-en is the west Shin-en. This garden with Byakko-ike (Byakko Pond) in the middle reflects the 4 seasons. On the east side of the pond is Dejima, the north side is the only waterfall in Shin-en, and to the southwest is the artificial mountain and tearoom Choshintei. 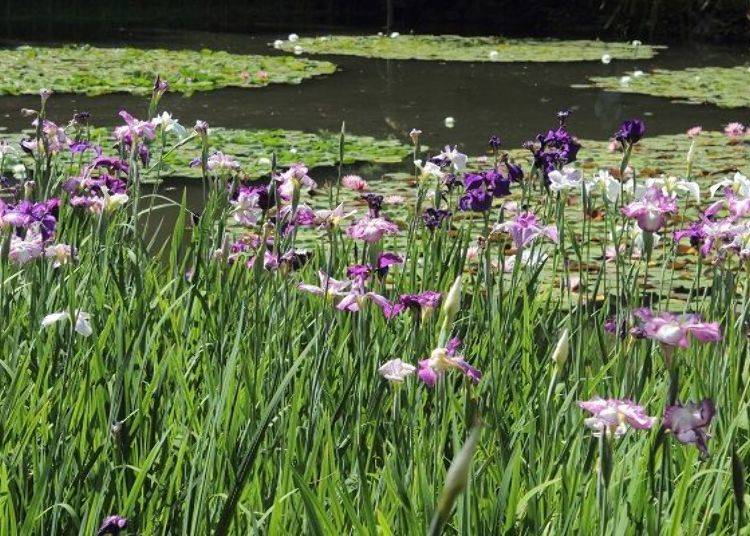 Every year in early June, the pond is filled with Japanese water iris. The scenery with 200 types of flower and 2,000 ancient Japanese flowers in bloom is breath taking. 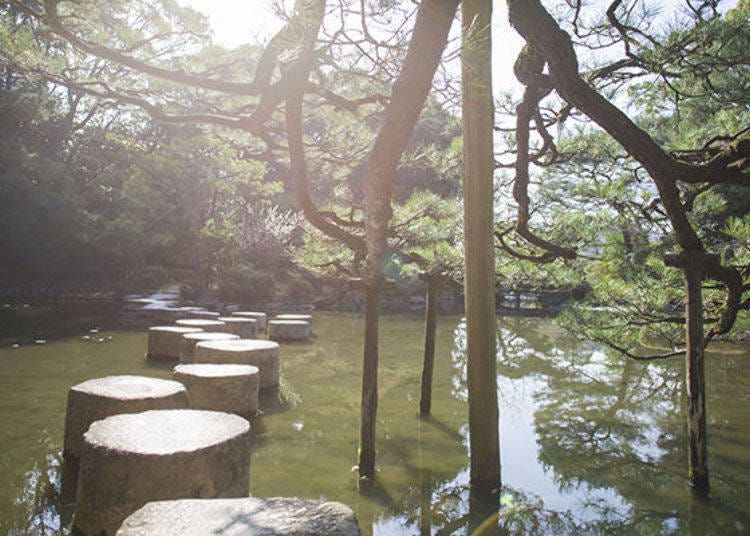 Past the west Shin-en is the central Shin-en. The Soryu-ike (Soryu Pond) in the center has the famous stone step bridge Garyokyo, which connects Sango Island on the west side to the north bank. It is said that it was made from stone pillars used in the Sanjo and Gojo Bridges during the Tensho period. 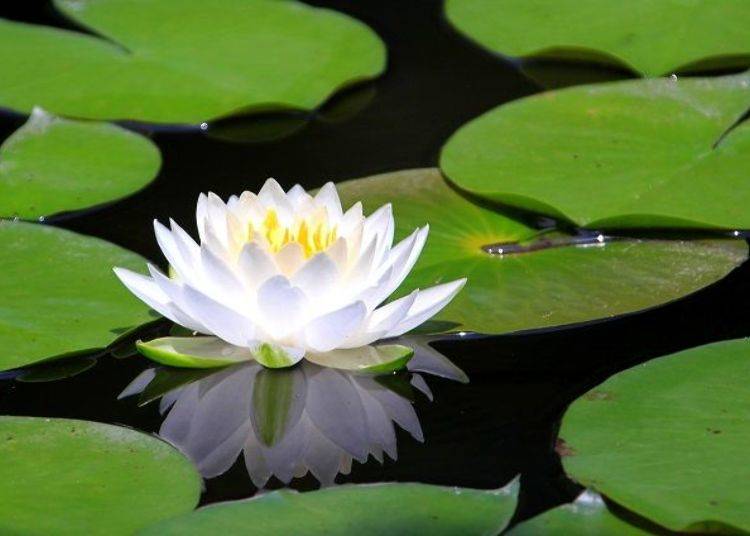 ▲During early summer there are masses of rare Japanese iris, kakitsubata, and water lilies 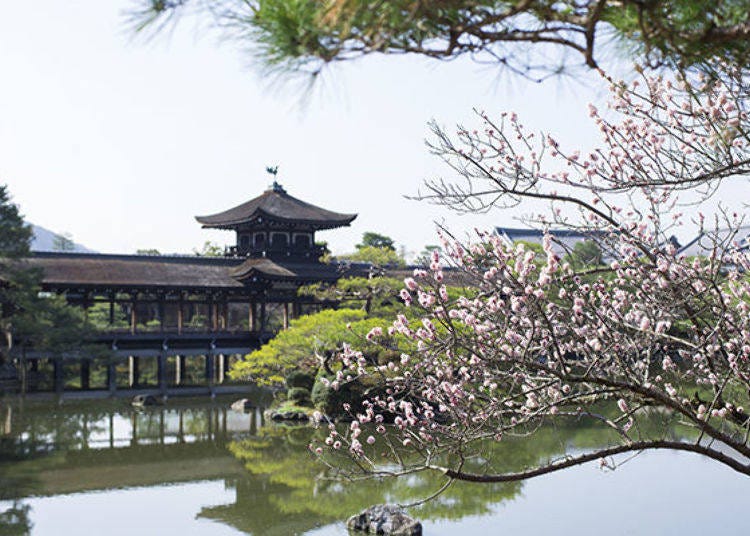 At the end of the route is east Shin-en. This area was built from the late Meiji period to the early Taisho period. Around Seiho-ike Pond in the center are Taiheikaku and Shoubikan which were relocated from the Kyoto Imperial Palace. 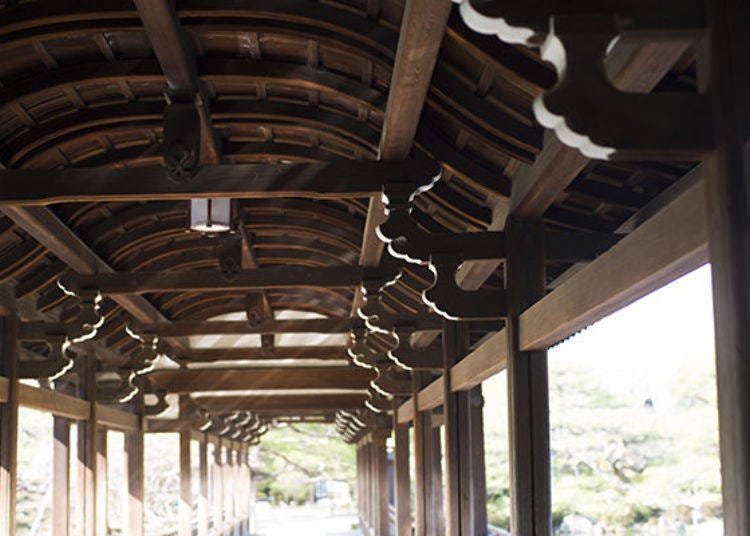 ▲The Taihei-kaku (Hashidono). The light reflects off the undulating water to the ceiling 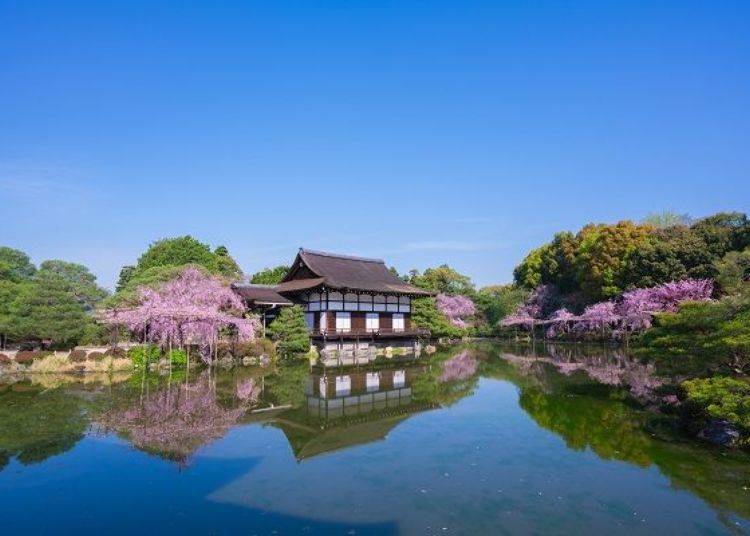 Around the pond there are Yaebenishidare cherry blossom trees, tsubaki (Japanese camellia) and satsuki (Azaleas native to Japan).

The Jidai Maturi is a festival held at Heian-jingu Shrine on October 22 (October 26 for 2019) every year. 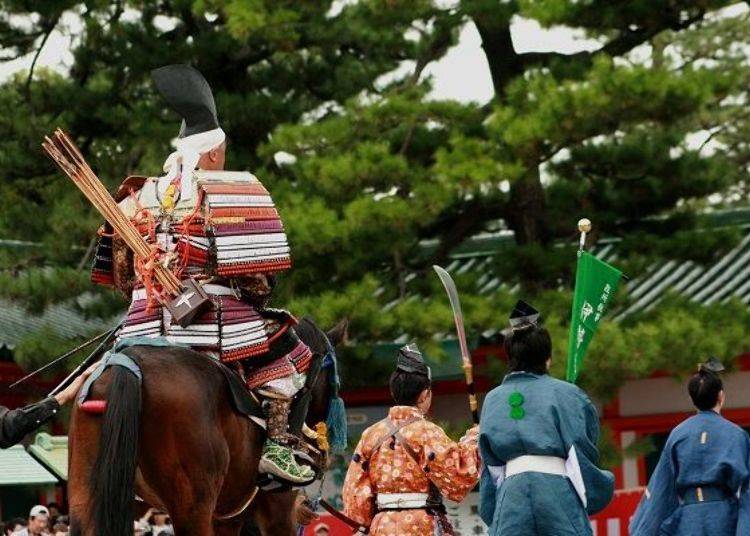 It is known as one of the three major festivals of Kyoto, next to Aoi Matsuri and Gion Matsuri, and attracts many visitors from around the world. The unique feature of the festival is public participation and using authentic equipment. This festival is managed by a civic organization and has a huge parade that represents 8 time periods in 20 segments with 2,000 participants. 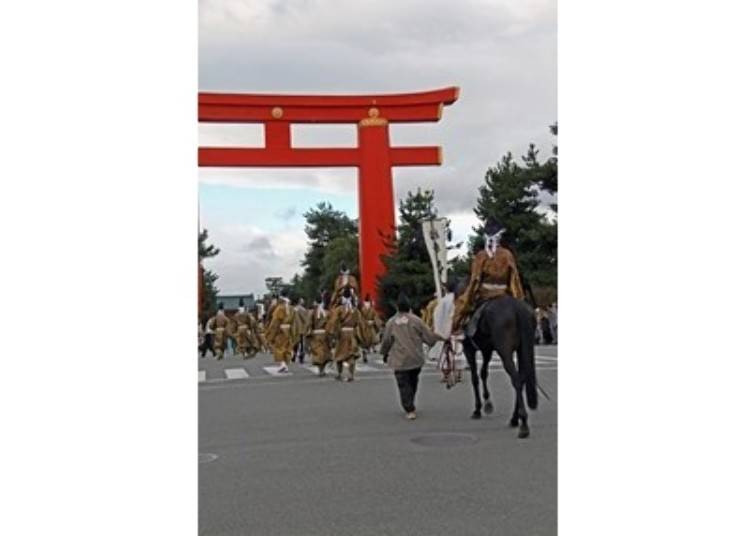 Through careful era verification, the items used in the festival were restored by authentic traditional craftspersons. It is a magnificent festival fit for the title of moving historical picture scroll. The festival was established at same time as the shrine and has the same aim to restore glory to the city and pass on tradition. 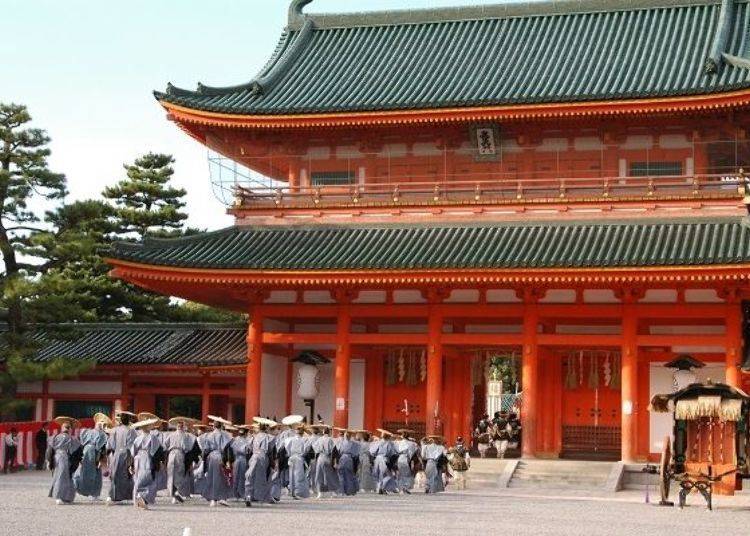 The route of the festival starts at Kyoto Imperial Palace at noon and heads west. At Karasuma Marutamachi (12:30 PM) they will go south to Karasuma Oike (12:50 PM). Head east through Oike Dori and reach Kawaramachi Oike (1:20 PM) and go south through Kawaramachi Dori to Kawaramaichi Sanjo (1:30 PM). Head east through Sanjo Dori to Sanjo Jingu Dori (2:10 PM), then north though Jingudo to Heian Shrine (2:30 PM).

It is expected to be very crowded during the festival. For people who wish to view the festival in reserved space, there are paid seats at Kyoto Gyoen National Garden, Oike Dori and Heian Jingudo.

Date
October 22nd (October 26th for only 2019)
*rescheduled in case of rain, decision will be made early in the morning on the day of the festival

We hope you enjoyed our guide. During your visit to the ancient city of Kyoto, please stop by Heian-jingu Shrine and take your time looking around structures and grand garden built by generations of people from Kyoto.

Book an unforgettable experience in Kyoto!

Join Kyoto Arashiyama Bamboo and Tenryu-ji Private Tour
*This information is from the time of this article's publication.
*Prices and options mentioned are subject to change.
*Unless stated otherwise, all prices include tax.