HOME Kansai Kyoto Gion, Kawaramachi, Kiyomizu-dera Temple Honke Owariya: Inside The Kyoto Soba Restaurant That Was Founded in 1465 (And Is Still Crazy Popular) 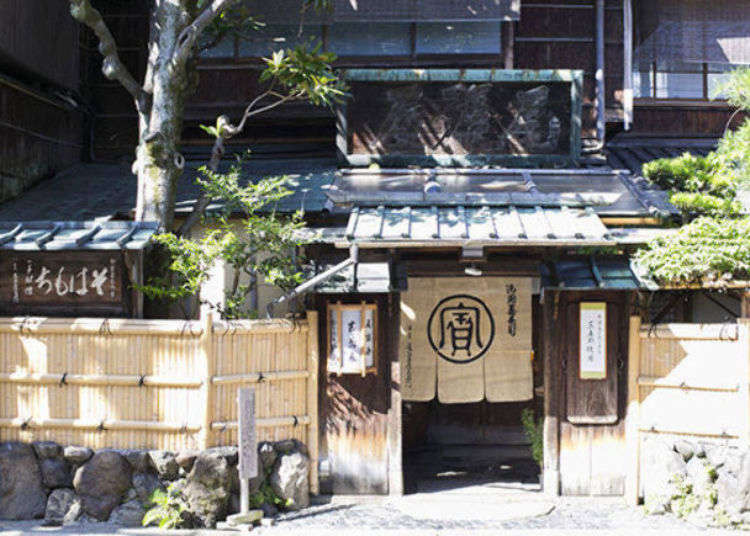 Honke Owariya: Inside The Kyoto Soba Restaurant That Was Founded in 1465 (And Is Still Crazy Popular)

Honke Owariya, considered to be one of Kyoto's best soba restaurants, was founded in 1465. One of Japan's oldest restaurants, it nevertheless retains a humble atmosphere. Walk through its doors and you'll find unique Kyoto soba dishes that you won’t find anywhere else! Want to enjoy a culinary treasure? Read on!

One of the oldest restaurants in Kyoto, Honke Owariya started off as a confectionery store in Owarinokuni (which now forms part of Aichi Prefecture). According to ancient literature, it moved to Kyoto “in search of a better class of customer”. It has now maintained Kyoto’s fine culinary traditions for over 550 years. 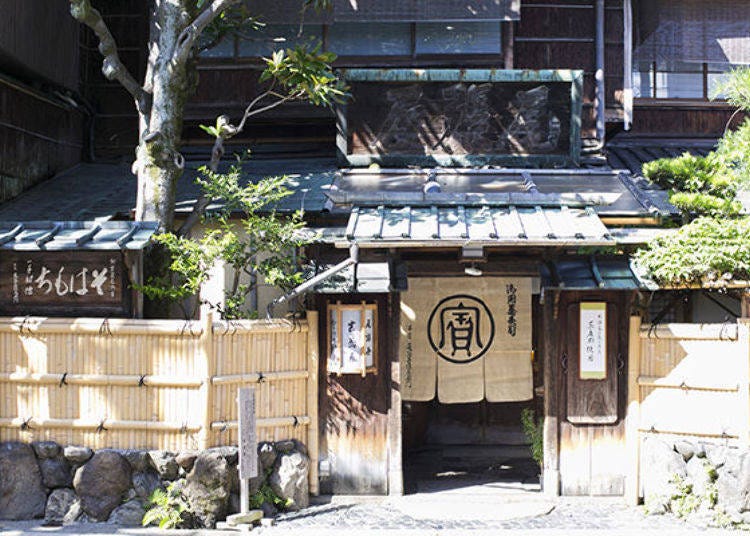 ▲The exterior of the restaurant exudes style and atmosphere. Note the striking historical signboard 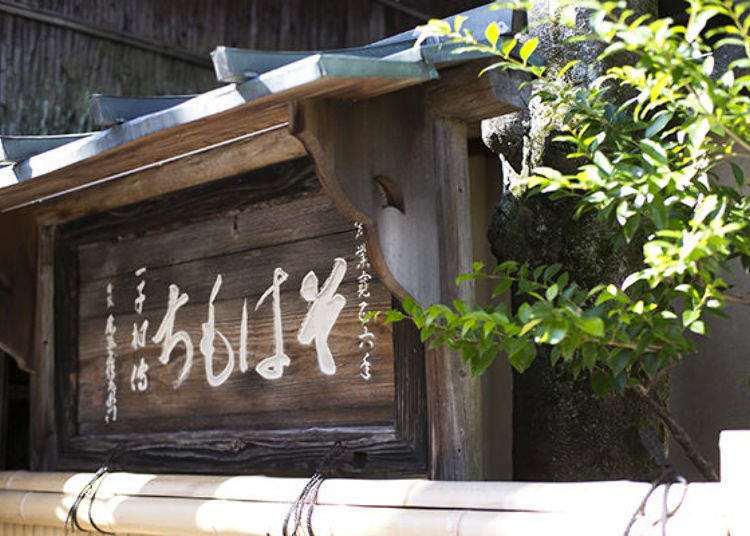 The characters on the board read Sobamochi. From the late Edo period to the Meiji era, the 13th owner of this establishment is said to have made a signature confectionery item here, known as Sobamochi.

Although he called it mochi (rice cake) it was actually what is known as soba manju, consisting of bean jam wrapped in a thin dough covering of buckwheat or wheat flour.

At that time, any round confectionery was generally called mochi, and that’s the name that has stuck ever since. These days, sobamochi is served as an accompaniment with Japanese tea and is very popular with Kyoto locals. 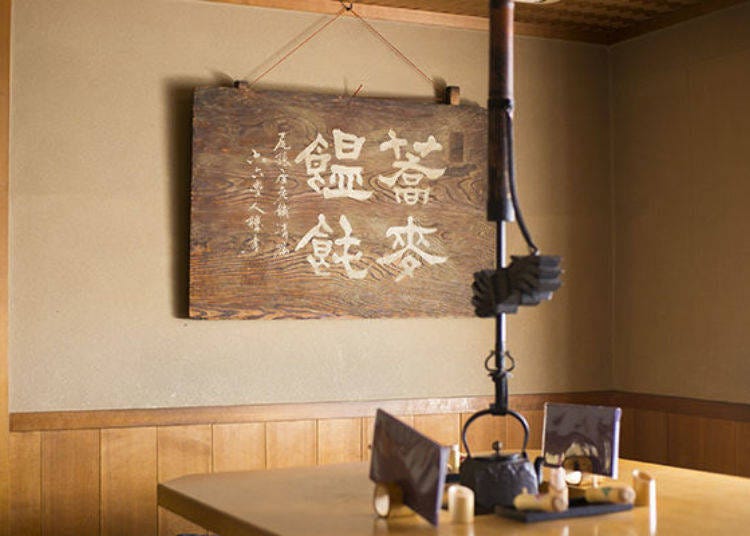 ▲Feel the history behind this plaque. Impressively painted characters spell out Soba and Udon

Nowadays, the main branch of Kyoto's best soba restaurant is in a Kyoto-style townhouse built in the early Meiji period. On the 1st floor, there is a tearoom with chairs, while the 2nd floor has a tatami room, also with chairs. 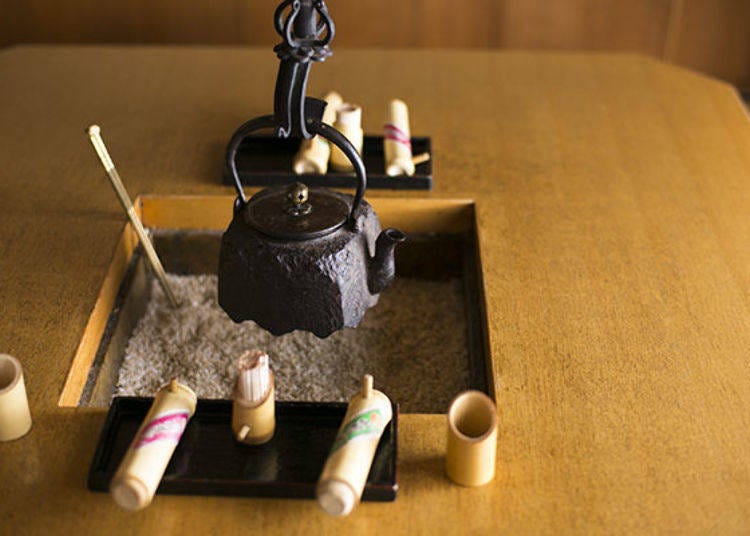 After ordering, I sit and wait for a while, relaxing in the comfortable surroundings. The decor reminds me that this place is steeped in the history of Kyoto. "Sorry to keep you waiting," a voice says. As I wait expectantly for the food to arrive, I'll tell you about some of Owariya's specialty dishes! 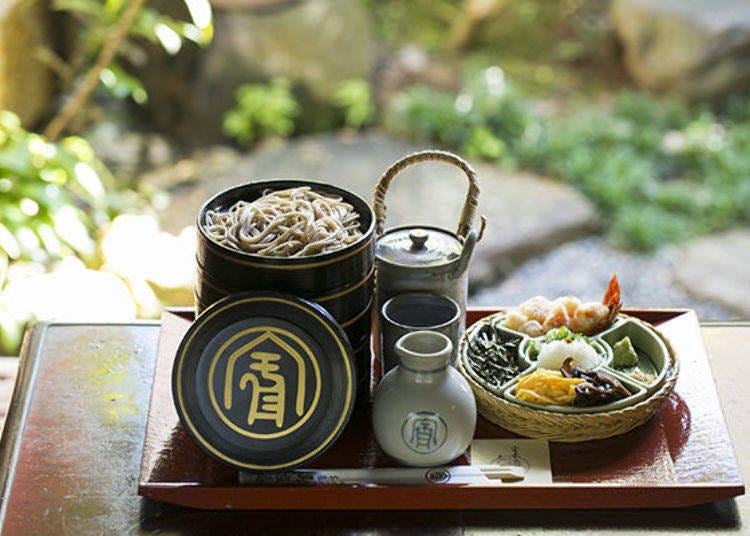 Ho-Rai Soba, Honke Owariya’s classic dish (2,160 yen, including tax). In the old days, goldsmiths are said to have used buckwheat flour to gather up scattered gold leaf. That’s why soba has been associated with luck in money and wealth since ancient times.

Since people used to eat soba to bring them luck, the 14th owner of the restaurant created this dish which he called “Ho-rai soba”. The noodles are served on five lacquerware plates stacked up (warigo), accompanied by toppings such as shrimp tempura, omelet strips and sweet-simmered shiitake mushrooms. You can eat whatever topping you prefer with each plate. 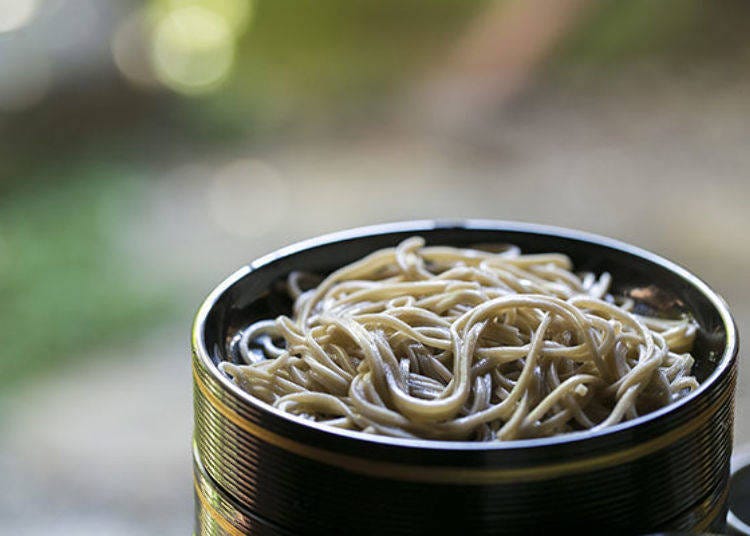 As you lift the lacquerware lid painted with the character" 寶" (Treasure - takara), you get your first sight of the fresh glossy soba noodles inside.

The soba is made from buckwheat grown by contract farmers in Otoineppu in northern Hokkaido and Kyoto groundwater, pumped from a well 50m below ground.

To start with, I take a mouthful of noodles on their own without adding any topping and bite gently. The noodles feel cool and slippery in my mouth, and the gorgeous aroma tickles my nose. Not too firm nor too soft. The consistency of the noodles is just right! There's also a subtle sweetness. I take another mouthful and then another. I can't get enough of the intense flavors. The dedication and artistry behind this dish come through clearly in the taste. 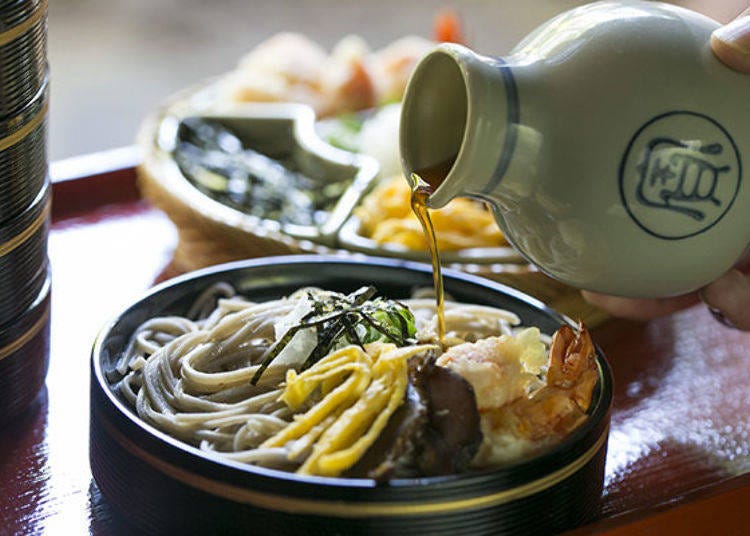 Next, I make a start on the side dishes accompanying the noodles. I just pile everything on at once! Such pretty colors, it's so exciting! I pour out some of the cool dipping sauce. The little jar also has the character "Takara" painted on it.

Oh! The aroma of the sauce wafts up. Smells good! I'm told that it takes time and effort to make the soup stock for the dipping sauce, with ingredients such as auxis tuna and Rishiri konbu, urume (chopped round herring), and dried mackerel shavings. I take a mouthful of the best soba in Kyoto with the dipping sauce. Layers of umami flavors from the dashi matched in exquisite harmony with the taste of the soba noodles.

Then I take a mouthful of noodles with grated daikon, wasabi, nori, and sesame. Each of these condiments adds subtle taste and aroma; the shrimp and shiitake mushrooms have a distinct flavor in their own right.

You can eat whatever combination you like: noodles on their own, noodles with dipping sauce, or with condiments or accompaniments. It's so much fun tasting the soba in all these different ways. You can never get tired of flavors like this! 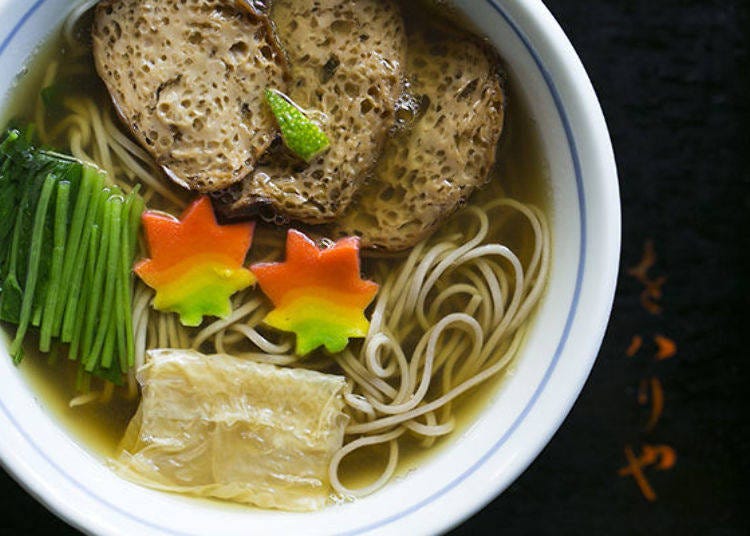 The next specialty I to tell you about is Rikyu Soba (1,188 yen, tax included). It’s an elegant dish of fresh noodles, yuba (tofu skin) and rikyufu (wheat gluten cakes fried in sesame oil) served in a warm soup. The dish is typical of Kyoto-style cuisine: simple, yet refined and delicious. 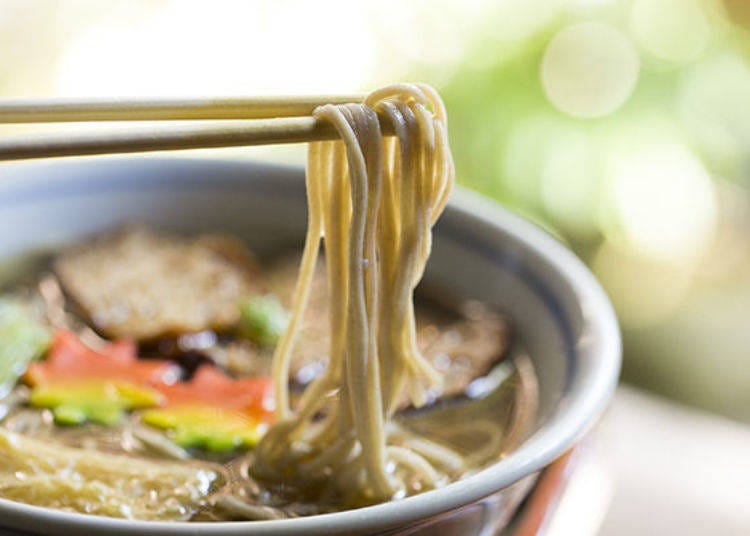 So, what does it taste like? Let’s take a bite! Compared with the Ho-rai soba I had just now, this dish is softer, but with more crunch. The noodles have just the right amount of chewiness.

The hot broth has a pleasant firmness of flavor with a rich and intense dashi. It complements the noodles perfectly. The yuba and gluten cakes absorb the flavors of the broth and taste exquisitely. Subtle fragrances from the ingredients and the aroma of the sesame oil waft up, adding a delicious undertone. 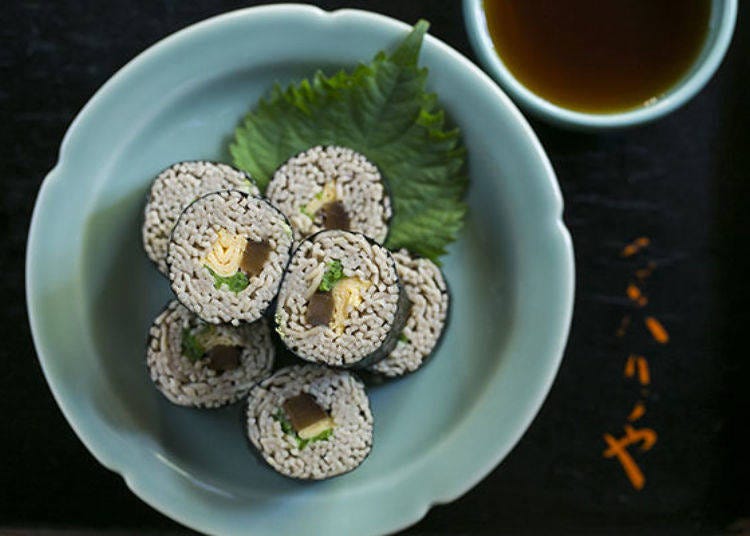 The last dish I try is Soba Sushi (1,080 yen, tax included). Cooked soba noodles are exquisitely arranged to look like a sushi rice roll, with a filling of seasoned shitake mushrooms, mitsuba leaf, and omelet.

You dip the soba sushi in dipping sauce rather than soy sauce. Moist nori complements the firm yet springy texture of the soba and tasty filling perfectly. The dish has a refreshing taste in the mouth, lighter than regular sushi, almost as if the chef has skimped on some of the ingredients.

Whatever soba dish you try at this restaurant, the quality of the ingredients shines through. Simply made and delicious - you’ll want to eat them again and again! You’ll be struck by the sense of tradition and history here at this long-established popular restaurant. 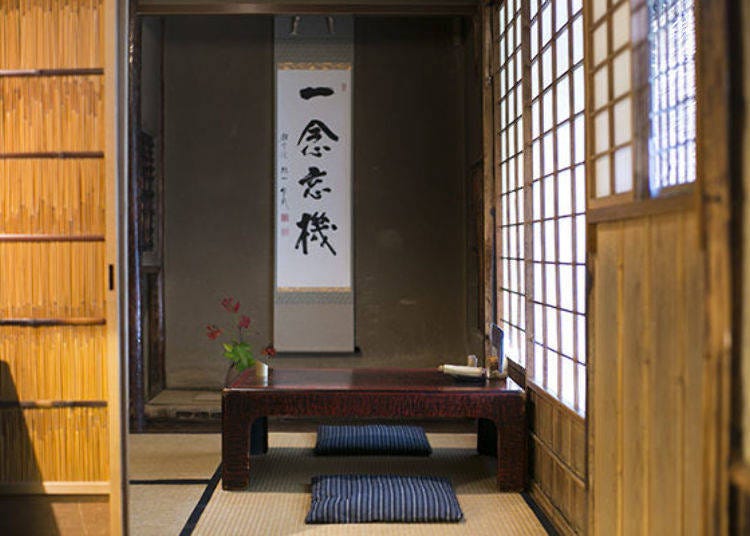 The soba dishes I'm writing about were served in the lovely tea room near the 1st-floor entrance. "Why is there a tea room in this soba restaurant?" you may ask. The answer lies deep in the history of Kyoto and of soba itself.

During the 13th century, noodle making expertise and know-how was brought to Japan by monks from mainland Asia. Although soba was mainly produced in the temples, temples started to ask confectionery makers for advice about kneading, stretching, and cutting techniques which could be applied to noodles. That's how the connection between confectionery stores and soba noodles first came about. 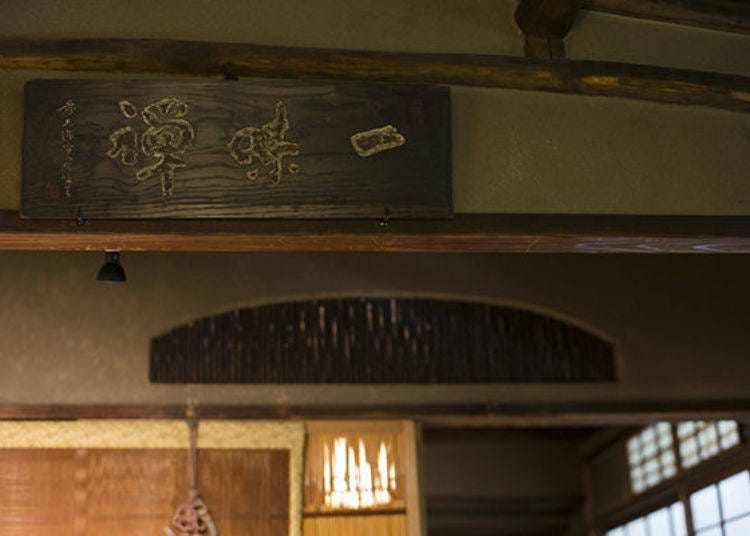 ▲The sign at the entrance to the tea house has Zen lettering.

The association between Honke Owariya and the temples of Kyoto started during the Edo period. The restaurant had particularly close links with Zen sects at Shokoku-ji, Kennin-ji, and Myoushin-ji. Its soba was often served as tenshin (snacks) there. Soba was a popular dish amongst the ordinary people during the Edo period and was well-established as part of the food tradition at temples in Kyoto. It’s because of this strong association between the restaurant and Zen Buddhism that a tearoom was built here.

*In Zen vocabulary, tenshin refers to a small snack eaten between meals 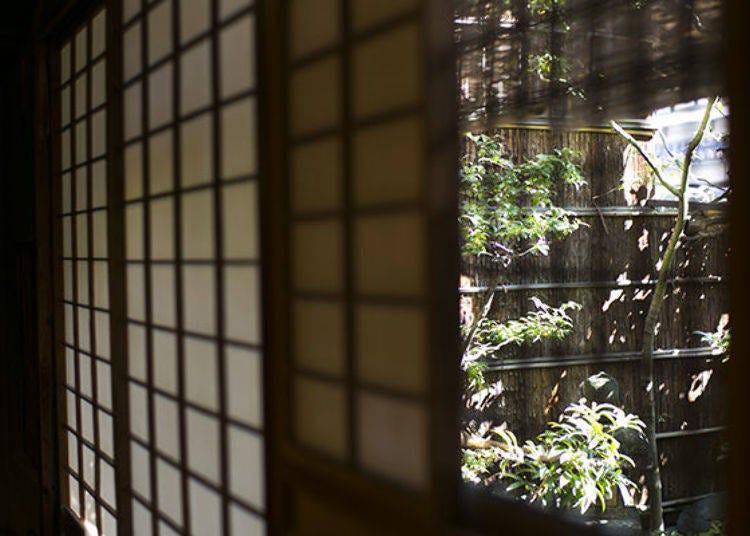 ▲View of the inner garden from the tea room. Light plays on the green leaves creating a peaceful ambience

This Kyoto soba restaurant's reputation has flourished since the 16th century 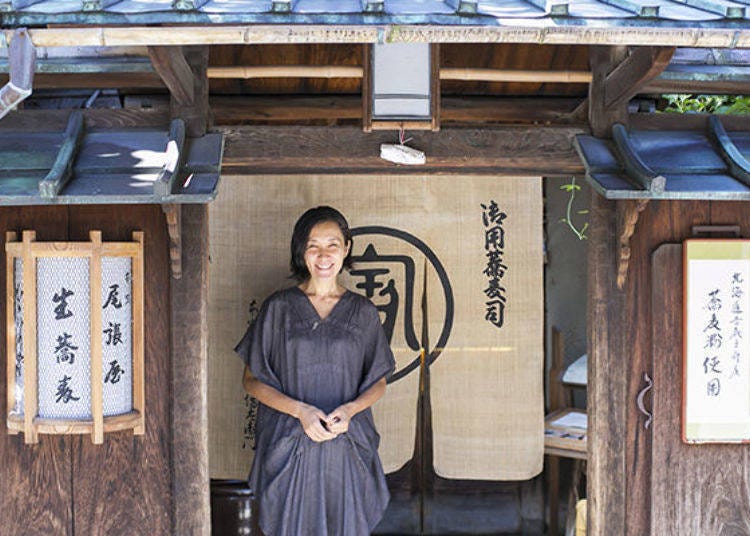 I spoke with Ariko Inaoka, the 16th owner of the restaurant. In the picture, she is standing in front of the entrance curtain, painted with the character 寶 (treasure).

"The challenge is to take what has been passed down to me, and to build on what is good about it, while adding innovation and elements of my own,” Inaoka-san tells me. I’m surprised to learn that she spent 10 years as a photographer in New York before taking over the restaurant. She also traveled around the world taking photos before returning to Kyoto in 2009. 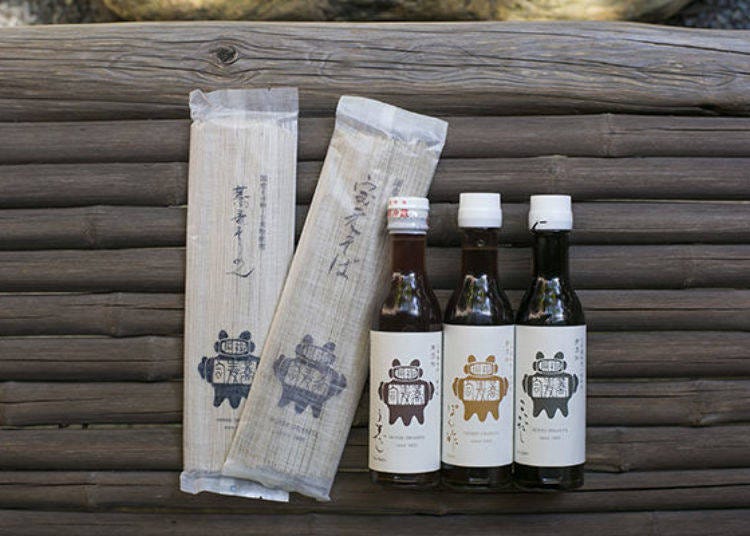 After she returned to Kyoto, Inaoka-san helped to run the restaurant with her grandfather (14th owner) and father (15th owner) before taking it on herself in 2014. By this time, she has fully appreciated the aspirations of the restaurant and its traditional values.

"It was hard work at first because there was still so much to learn. More recently, however, I've really started to enjoy it," says Inaoka-san. She tells me how she likes designing packaging and promotional material for the restaurant, as well as coming up with new ideas for products that fully express the restaurant's traditional values. 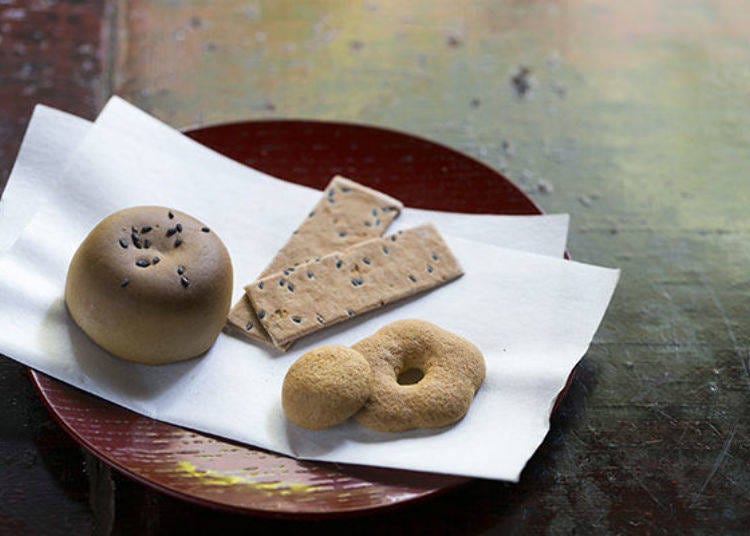 The soba mochi shown in the photo is a soba manju (referred to earlier), made of bean paste wrapped in buckwheat dough. The aromatic lightly cooked mixture goes perfectly with the bean paste inside, with its understated sweetness.

The soba cracker is an exquisite snack baked quickly until crisp, utilizing skills unique to the art of soba making. There is no aftertaste of buckwheat flour or sesame.

The soba ball is a confectionery of western origin, made of egg whisked with sugar, flour, buckwheat flour, and then baked. It's an elegant product with a pleasant, light texture and rustic flavor—a typical Kyoto souvenir.

Inaoka-san tells me that at Honke Owariya, they make modern-style confectionery as well as traditional products. We can't wait to taste some of these! 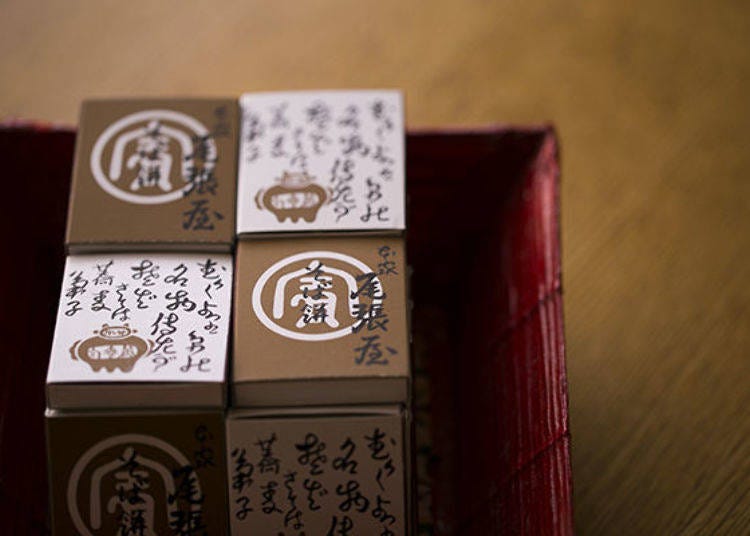 Against the backdrop of history, some things here have changed, some have not; some things have been kept as they were, while others have been adapted. The flexible approach of the restaurant adds to its character. The food here is uniquely redolent of history, with old traditions innovatively reimagined and reinterpreted. No trip to Kyoto is complete without a visit to the best soba in Kyoto - at Honke Owariya!