HOME Kansai Kyoto Fushimi, Uji Inside the Phoenix Hall of Byodoin Temple, This Glorious Feast For the Eyes Awaits! 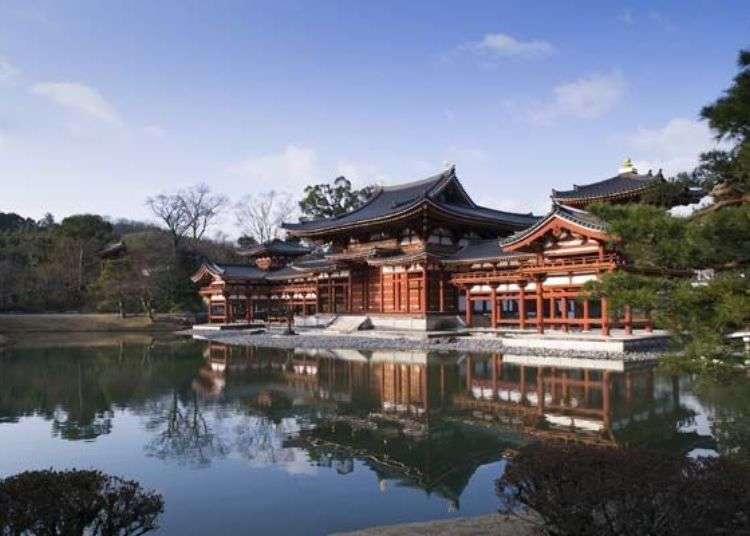 Inside the Phoenix Hall of Byodoin Temple, This Glorious Feast For the Eyes Awaits!

Depicted on the back of the 10 yen coin, Byodoin Phoenix Hall is very familiar to Japanese residents and tourists alike. But when one actually sees the size, dignity and vibrant colors, a voice of admiration can often be heard amongst onlookers.

Here we will take you inside this beautiful world cultural heritage site.

Byodoin Temple, Restored to its Glorious State from a 1,000 Years Ago

The history of Byodoin Temple goes back to 1052. The facility was originally a villa that Regent Yorimichi Fujiwara received from his father Michinaga and was then converted to the Buddhist temple, Byodoin.

At the time Mappo-shiso, or the end-of-the-world theory, had spread and it was thought that 1052 marked the first year of the beginning of the end of the world. With this many people sought out Gokuraku-oujo, or rebirth in paradise.

For them, the completion of Byodoin, may have seemed like heaven on earth. The temple is built on an island in a pond giving the impression of a palace floating on a treasure island in nirvana. 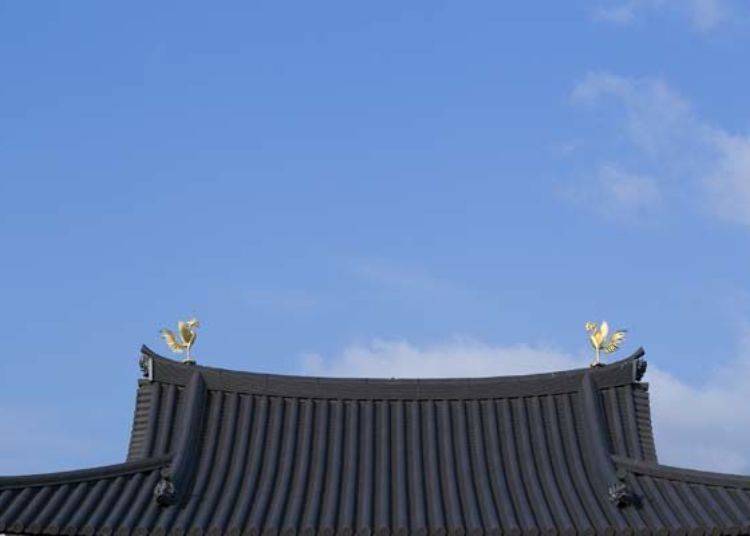 ▲Kondo Hoo-ou is seen on the 10,000 yen bill. The phoenixes on the roof of Chu-do Hall are the second pair to have adorned this national treasure

During the Heisei period, a major renovation took place from September 2012 to September 2014. The renovation retained most of the current materials. For the exterior colors and roof tiles, the original pigmentation and materials were researched and replicated.

Not only the Kondo Hoo-ou but also the Hoju (sacred) gem on the tower was researched and replicated to resemble its original magnificent state. 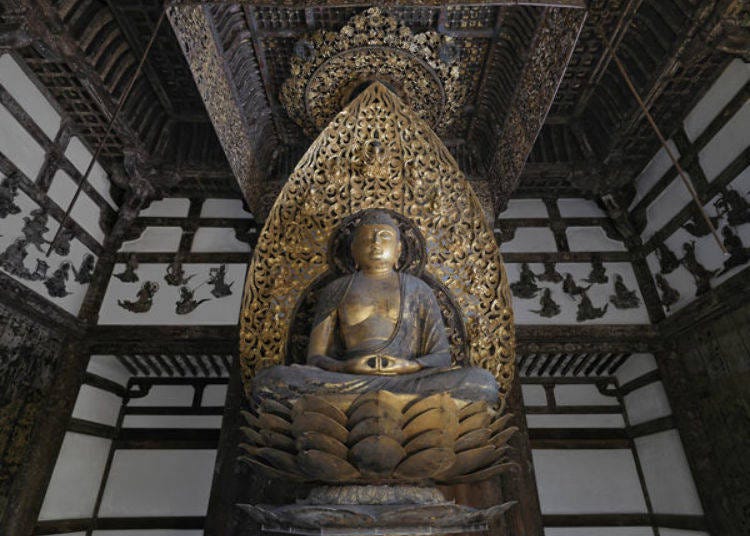 Byodoin Temple's Phoenix Hall itself is designated as a national treasure, as are the wooden Amida Buddha (Amida Nyorai) and the 52 statues of Praying Bodhisattva (Buddhist Saints) on Clouds.

All were constructed in 1053 for the celebration of the completion of the temple construction. The high level of sculpturing technology and aesthetic sense that the Japanese people had at the time is truly awe-inspiring. 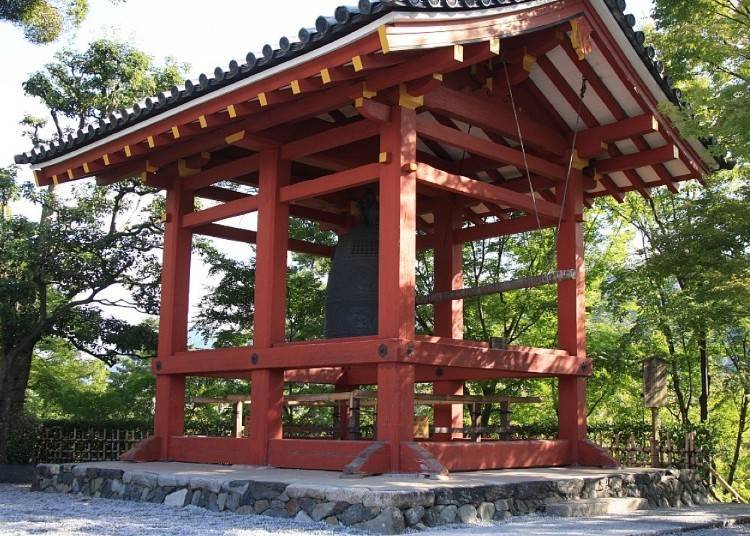 ▲One of the three outstanding temple bells of Japan. The current bell is the second casting and the original, a designated national treasure, is on display at Byodoin Temple Museum Hoshokan 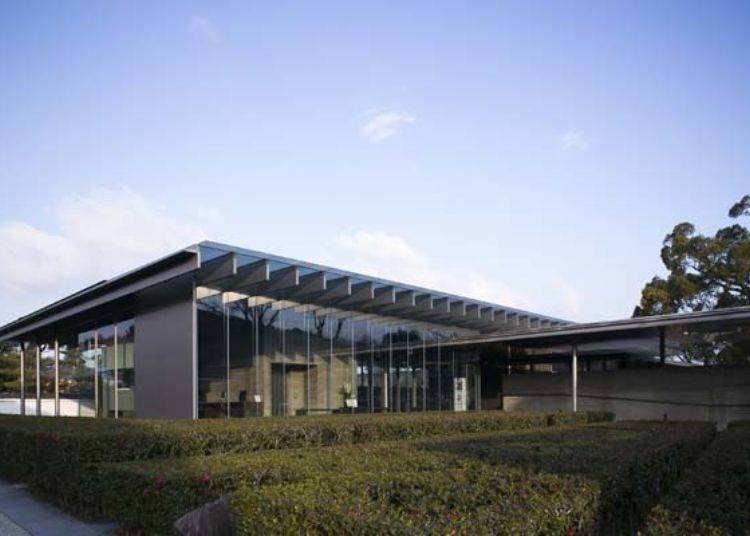 After enjoying the view of the Phoenix Hall from the garden, let’s head over to the Byodoin Temple Museum Hoshokan which houses many national treasures and important cultural properties.

On our tour we received special permission to photograph the precious cultural properties on display. 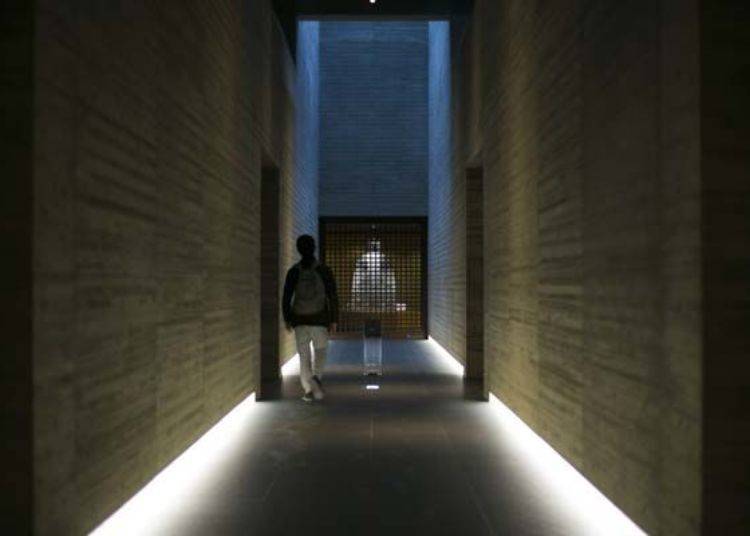 The museum was built by Akira Kuryu, an architect who has received numerous awards. The area surrounding Phoenix Hall is designated as a place of scenic beauty focusing on the historic hall. In order to avoid interfering with the harmony of the area and the beautiful garden, the majority of the museum is underground. The museum also employs various methods to enhance the exhibition, such as letting in natural light.

Upon entering the museum, there is a majestic hallway similar to those found in temples leading to... 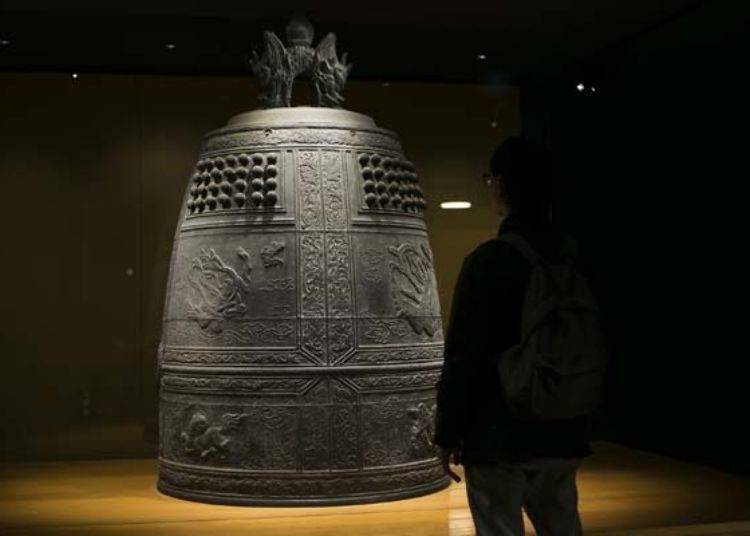 The national treasure Temple Bell. Previously it was located in the belfry near the garden. However, in order to avoid the effects of air pollution it was moved into the museum.

On the upper part of the bell there is an inscription of a dragon ruffling its mane and figures of phoenixes and dancing celestial beings. 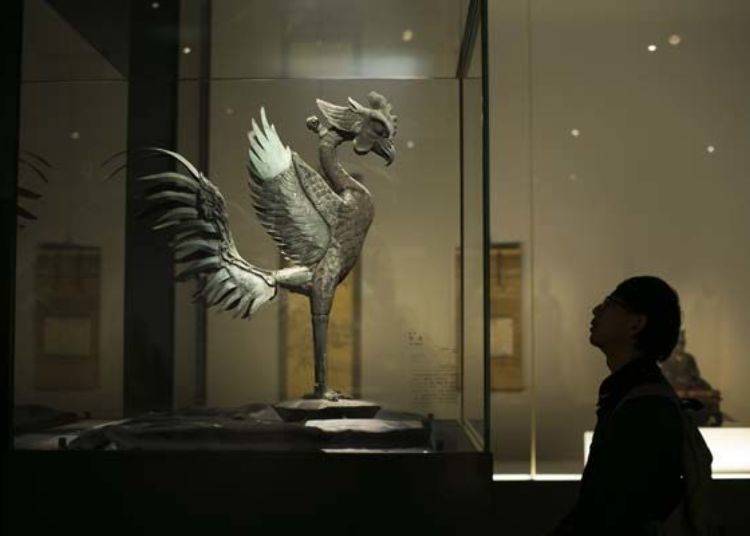 National treasure Kondo Hoo-ou, the Phoenix. Previously these were placed on the northern and southern ends of the roof of the Chu-do Hall (Phoenix Hall), but they were also moved to the museum to avoid pollution damage.

The official name of Phoenix Hall is Amida-do Hall, but since it looks like a long tailed bird spreading its wings, and with the phoenix statues on the roof, it has been called Phoenix Hall (Hoo-ou-do) since the modern period. 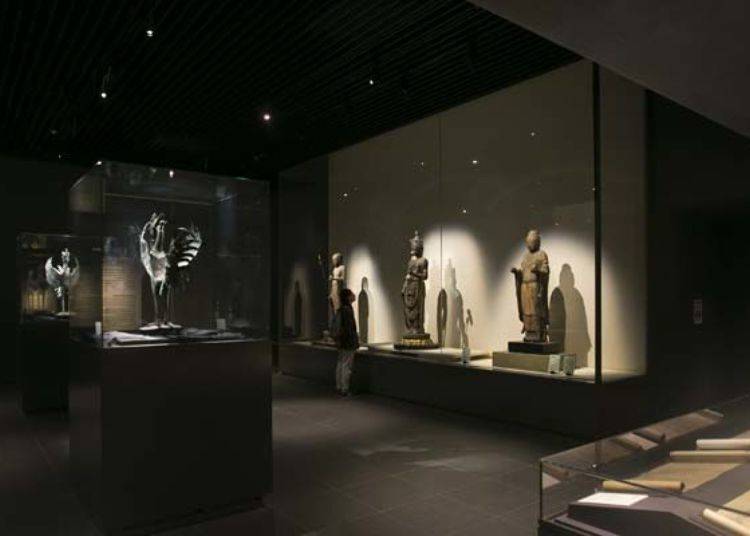 ▲In addition to the phoenix and temple bell, there are also the important cultural property Eleven-face Kannon Buddha, cultural property of Uji City Statue of Taishakuten, Statute of Jizo Bosatus ,and many others. 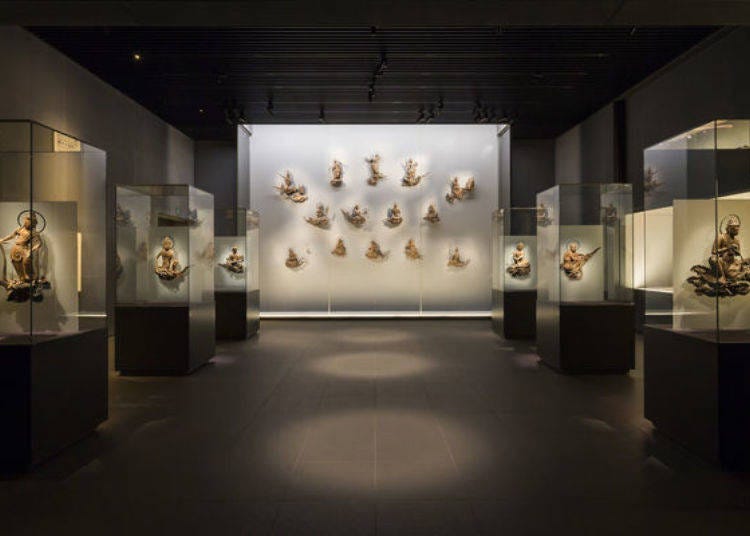 These are the Praying Bodhisattva (Buddhist Saints) on Clouds that were originally mounted on the wall above the beam running between columns in the Chu-do Hall (Phoenix Hall). 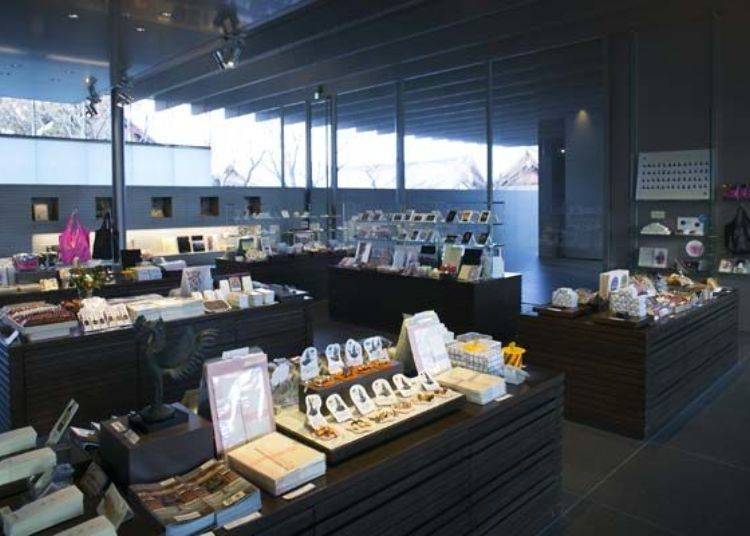 With the Phoenix Hall having been restored to its glorious state of a thousand years ago and the numerous national treasures on display, we hope that you’ll come experience their majesty for yourself.