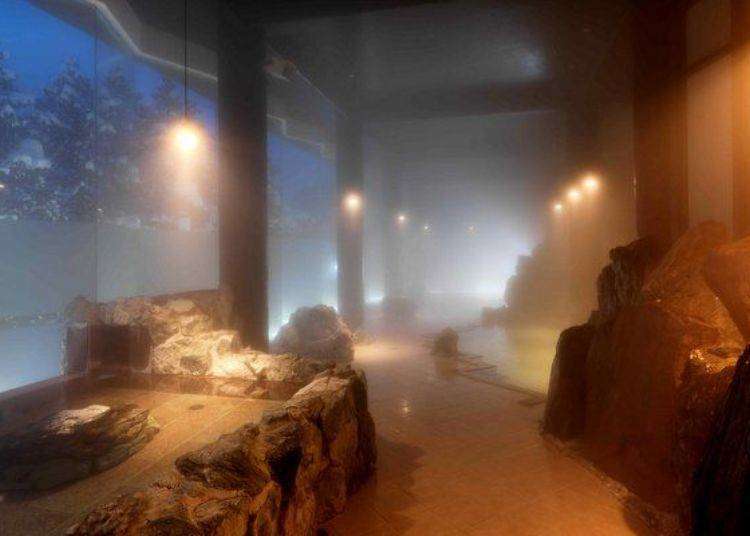 Onneyu Onsen is located in the eastern part of Hokkaido. Every hot spring facility here is supplied with 100% free-flowing hot spring water. And due to the anti-aging effects of the waters, this area is particularly popular for people with skin conditions.

The area also has many colorful tourist spots, such as an aquarium like no other in the world and a fox ranch. Here's an intro to some of Onneyu Onsen's must-see attractions.

Onneyu Onsen is located in the town of Rubeshibe, which is about an hour and 15 minutes away from Memanbetsu Airport, and 40 minutes by car from Kitami City. It is surrounded by the three national parks, Akan, Daisetsu, and Shiretoko. It is noted for being a good base for sightseeing in eastern Hokkaido because of its location which is convenient for visiting Asahikawa, Sounkyo Gorge in the Kamikawa region, Okhotsk, and the Nemuro region. 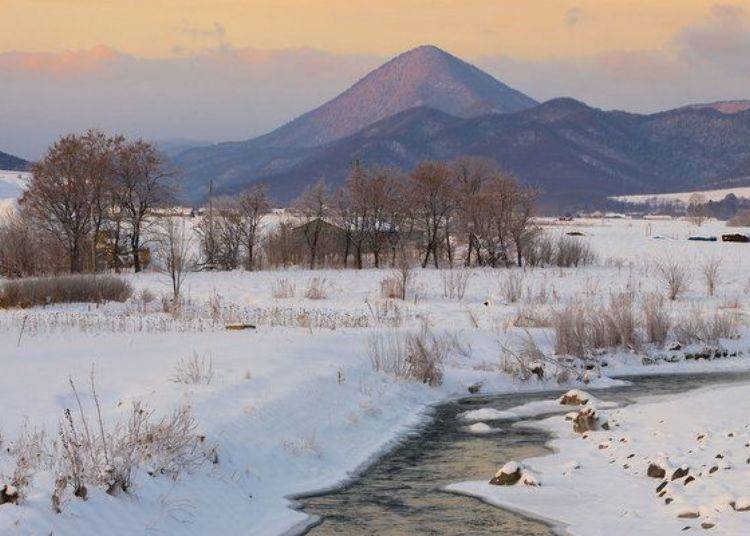 The hot spring began operations in 1899. The word Onneyu comes from the Ainu language meaning “large” (onne) and “hot spring” (yu) and this was a spot popular with the Ainu even before it became known to Japanese settlers.

Three hot springs make up this hot springs town – Onneyu Onsen, Taki-no-Yu Onsen, and Ponyu Onsen – and all of them are simple sulfur springs. In Japanese they are known as bihada no yu, or “hot spring for beautiful skin,” because bathing in them makes the skin feel smooth and moist. For this article we visited hot spring hotels and inns centered around Onneyu Onsen that line the Mukagawa River that flows through Rubeshibe Town.

First we visited Ōe Honke which was founded in 1899 at the same time as the Onneyu Onsen opened for business. 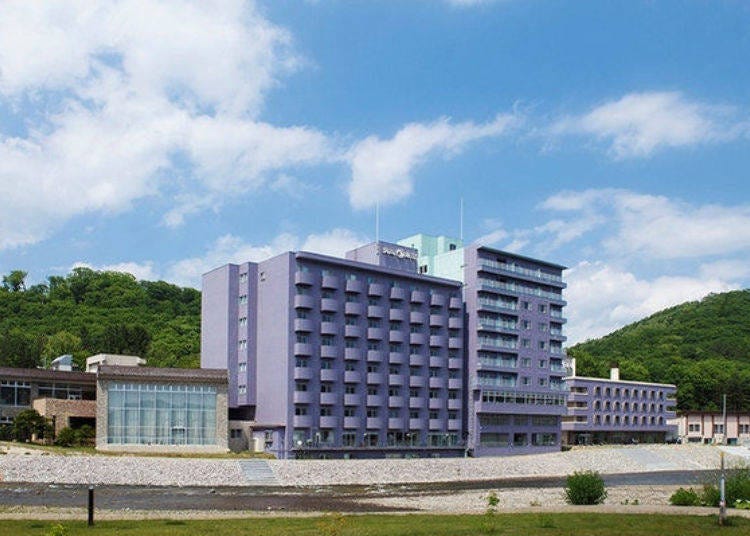 It is about a 10-minute car ride away from the JR Nishi Rubeshibe Station. The color of the exterior is said to be the same as that of the daurian rhododendron that reaches its peak in early May each year. (Photo provided by Ōe Honke)

Standing beside the banks of the Mukagawa River, which is beautiful in each season, there are two wings, the Hienkaku and Chosuikaku, each with a variety of room styles. These include Japanese and Western-style rooms with Japanese cypress wood bathtubs and tranquil Japanese-style rooms, of which there are 174 rooms in total, and pets are also allowed to stay with you. This inn is popular with families and groups because there is a large selection of room types from which to choose. 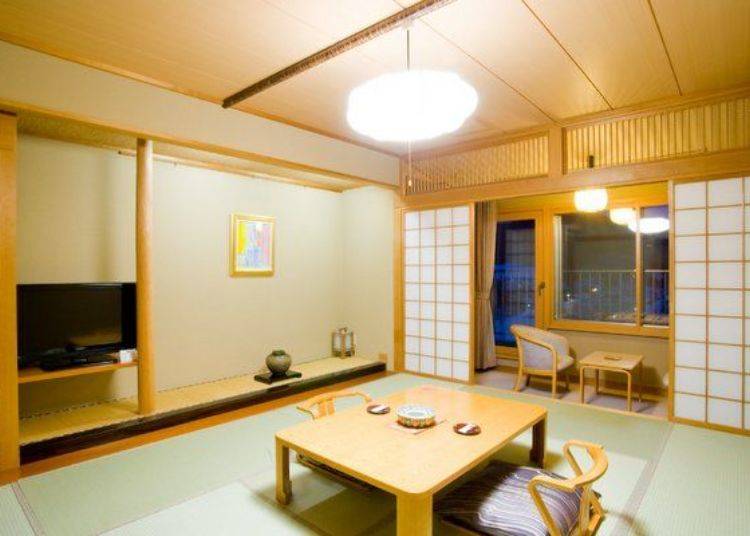 A Japanese-style room (10 tatami-mat size) in the Hienkaku (Pavilion of the Flying Swallow). The Mukagawa River can be seen from the windows of this tranquil and relaxing room (Photo provided by Ōe Honke) 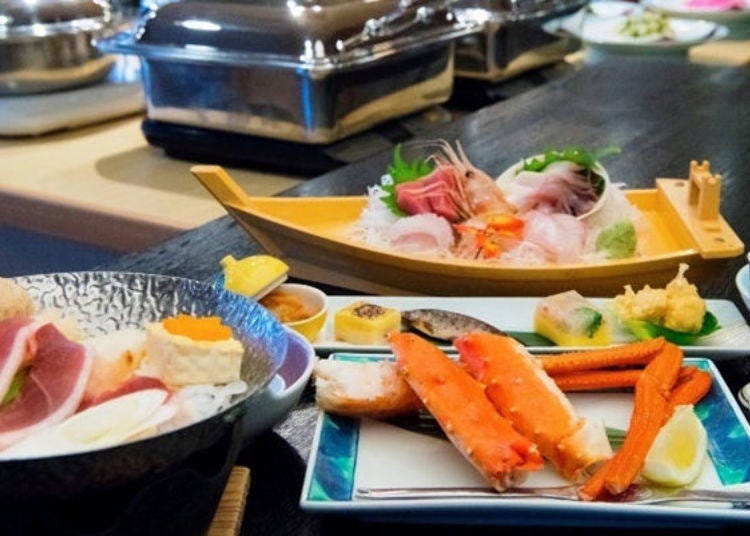 The pride of the inn is its undiluted hot spring water flowing directly from the source. The hot spring baths can be enjoyed by day-trip visitors as well. There is a large bath in a separate annex next to the west side of the Chosuikaku. To enter, purchase a ticket from the vending machine at the entrance (800 yen for adults and 400 yen for children, tax included in both prices). 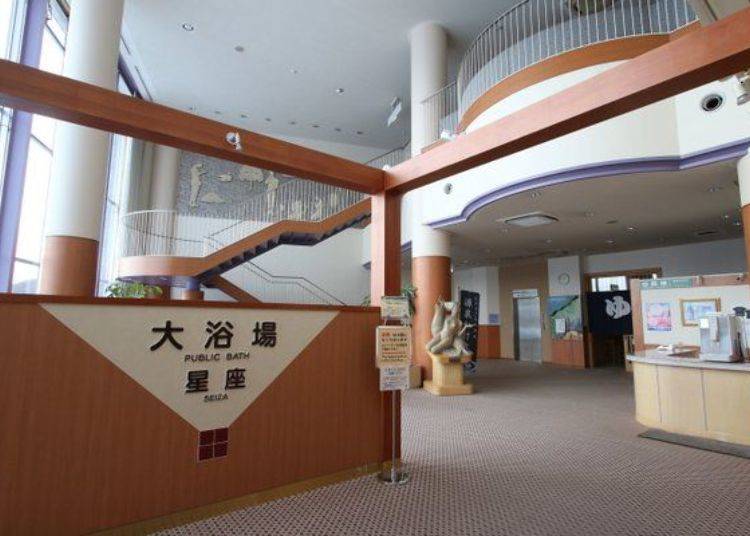 The lobby of the large bath is called Seiza which means “constellation”. The men’s bath is on the first floor and women's bath is on the second floor, both baths having the same layout.

The high ceilings and large windows make the baths very bright during the day time. There are also three large and small baths, a Jacuzzi, utaseyu, which is a stream of hot water pouring onto the shoulders and back, as well as a sauna. The baths use 100% hot spring water flowing directly from the source without the temperature adjusted or water added, so the bath temperature is just perfect for a relaxing soak. 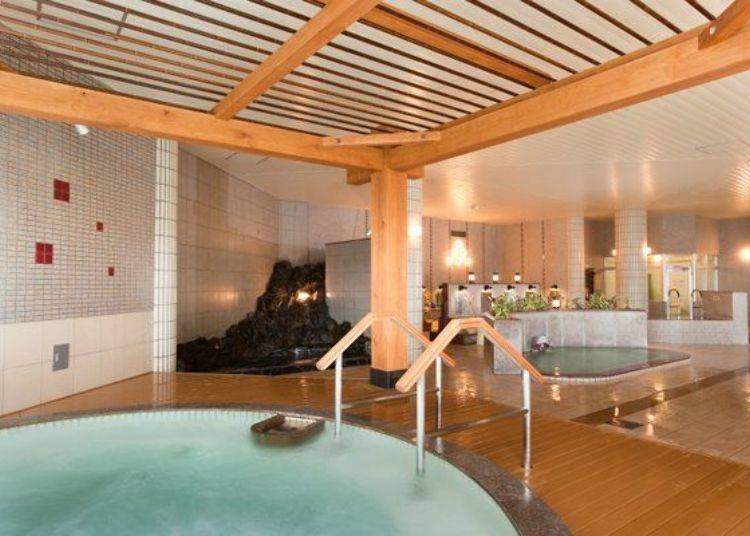 The Jacuzzi and rock baths all use hot spring water. The delicate aroma of sulfur is soothing (photo provided by Ōe Honke)

The Mukagawa River is visible from the open-air bath. The bath made with natural rocks gives a feeling of unrestricted openness. 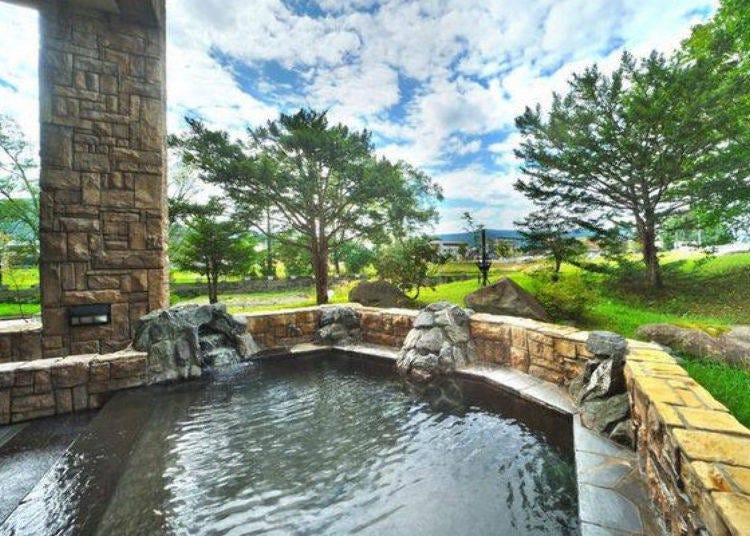 Nothing can compare to soaking in a bath in the midst of nature! The Mukagawa River is just beyond the trees (Photo provided by Ōe Honke)

Soaking in the steady flow of natural hot spring water, not only will your skin become softer, but your body and soul will feel cleansed as well. The pleasant sound of the Mukagawa River will make you forget the time as you enjoy the comfort of the hot spring.

Secrets of Bihaku-no-Yu: Purported to have anti-aging qualities, too!

Tetsuji Suto, managing director of Oe Honya, is also a hot spring expert and he explained that the attractions of Onneyu Onsen are its perfect water temperature and minimal stimulation to the skin which enhance the bathing pleasure. 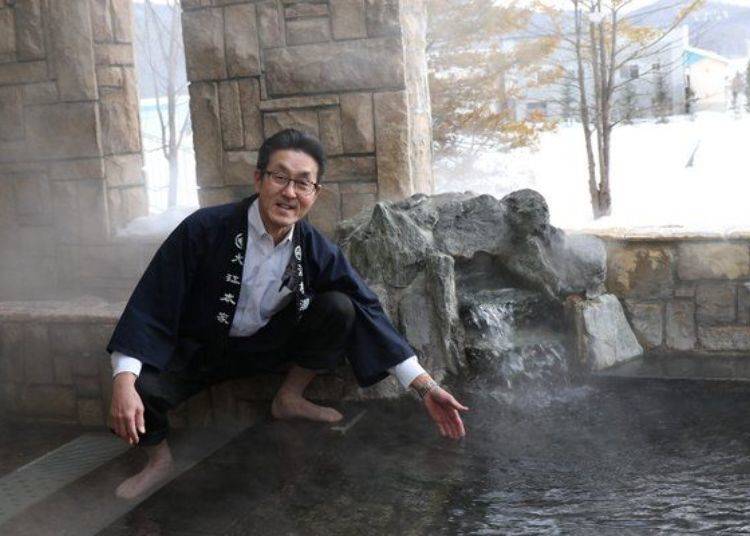 Mr. Suto explained, “We make every effort to maintain the highest quality of the hot spring for the pleasure of our guests.”

“The hot spring water of Onneyu Onsen is collected from three sources into a large tank from where it is distributed to the inns and other facilities. It is 51°C (124°F) at the source, but by the time it enters the baths the temperature has dropped to about 41 to 42°C, so there is no need to adjust the temperature or add water,” he explained. 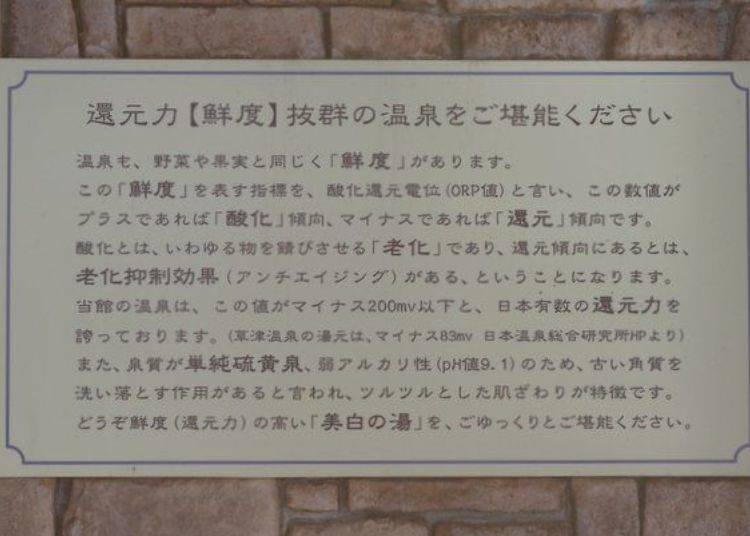 The spring water in the large bath has been scientifically proven to have anti-aging effects.

It is an alkaline simple hot spring. Keratinized skin is washed away, making the skin smooth, and this has led to it being dubbed the "beauty spa". In addition, since there is no need to recirculate the water or filter it because of the abundant amount provided from the source, the spring water has a higher purity and it is this which is attributed to its anti-aging effect. 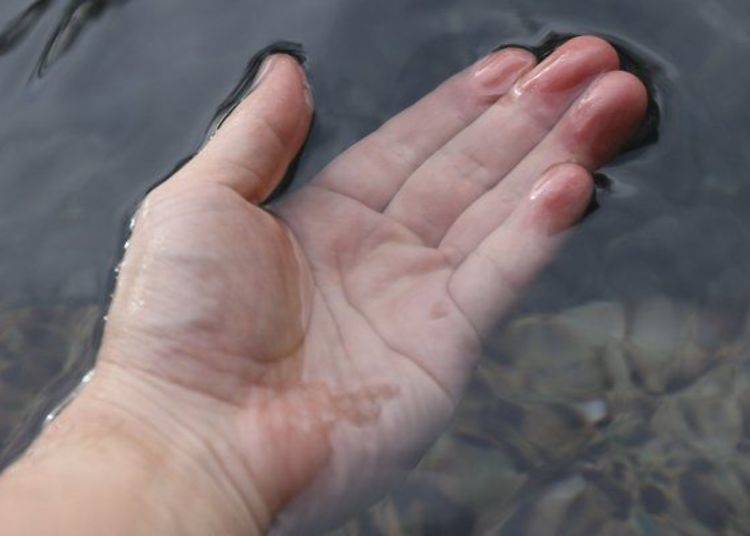 "Onneyu Onsen makes a deep impression on hot spring aficionados and I am convinced that it rivals others for having the best quality in Hokkaido. I hope visitors will come and personally experience the attractions of our hot spring,” Mr. Suto said. I did as he suggested and can fully attest to the charms of this hot spring.

If you want to experience the pleasures of several hot springs around Onneyu Onsen then I recommend getting the Onneyu Onsen Pass issued by the Onneyu Onsen Inns Cooperative. You can use the pass four times, once at each of the following: Oe Honke, Onneyu Hotel Shiki Heian-no-Yakata, Hotel Tsutsuji-so, and Hotel Shiobetsu Tsurutsuru Onsen. 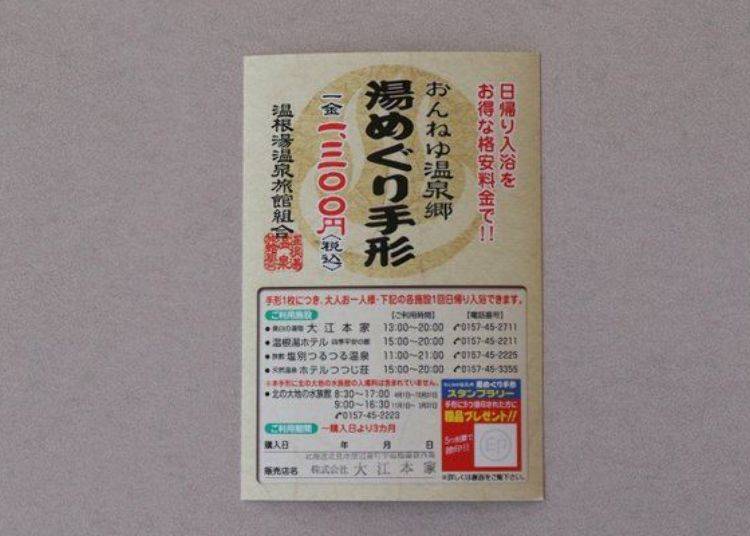 The pass is valid for a period of three months from the date of purchase. The pass may be purchased at any of the four inns or at the Northern Daichi Aquarium which will be explained later. (The price of the pass does not include admission to the aquarium.)

All of the four establishments mentioned have hot spring water flowing directly from the source. At Onneyu Onsen you can fully enjoy the qualities of the natural spring water that will restore your skin and make it feel smoother. 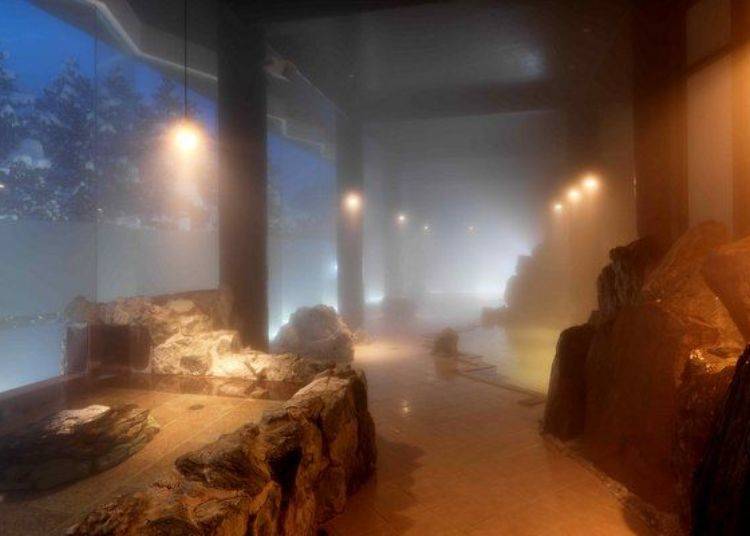 The Shiki Heian-no-Yakata has several unique baths, such as the maifan stone bath and another that contains the "phantom" chaga mushroom. (Photo provided by Onneyu Onsen Inn Cooperative) 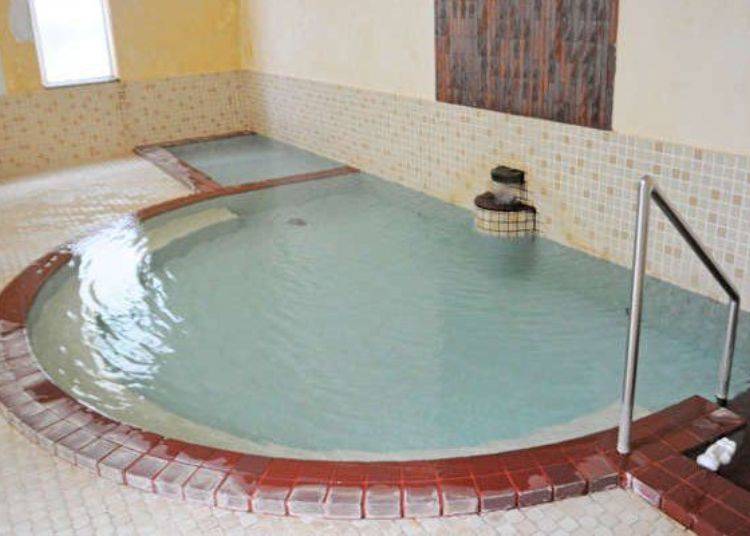 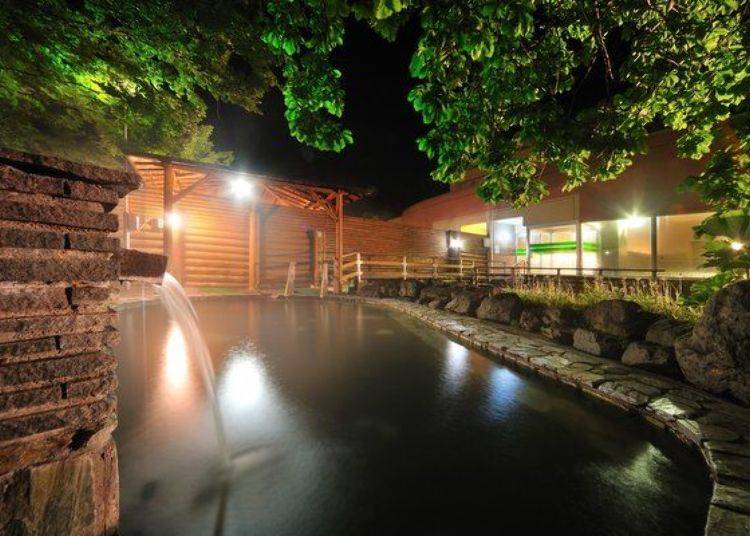 It is located about a 10-minute drive from Onneyu Onsen. Tsurutsuru Onsen is situated in a rich natural setting in the Taki no Yu hot spring area. (Photo provided by Onneyu Onsen Inn Cooperative)

In addition to being able to use the four inns, you may also visit the Northern Daichi Aquarium and if you obtain stamps at each facility, you will be given a small gift. Everyone is invited to experience the pleasures of all the hot springs at Onneyu Onsen.

Here are some other recommendations for when you visit this area. Be sure to stop by the Northern Daichi Aquarium and Kitakitsune Fox Farm situated along Route 39 near the Onneyu Onsen Rest Area 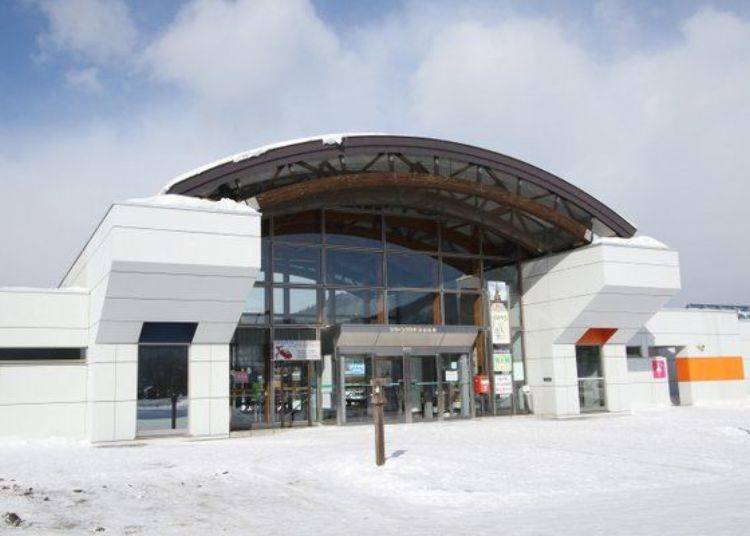 Onneyu Onsen Rest Area. There is a bus going to this rest area that departs from JR Rubeshibe Station (travel time about 20 minutes).

In the grounds of this rest area is the Northern Daichi Aquarium, where about 50 types of freshwater fish from around the world numbering about 3,000 in total are raised; the first of its kind in Hokkaido. 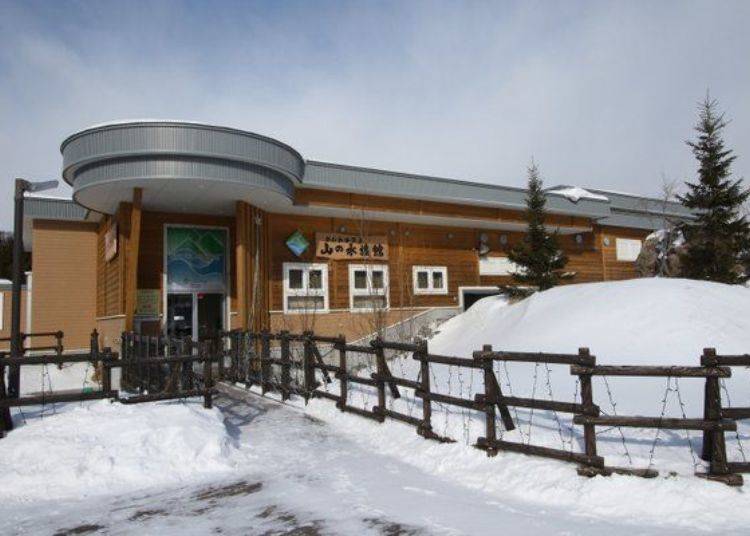 Although it is not a large facility, it contains fish types that are rarely seen in other parts of the world.

The Waterfall Basin Tank, the first of its kind in Japan, and the Frozen River Tank is the first of its kind in the world. Another highlight is the Giant Ito Tank containing large phantom freshwater fish. These were designed and created by Mr. Hajime Nakamura who also designed and created the New Enoshima Aquarium and the Ikebukuro Sunshine Aquarium. The elaborate exhibitions are widely acclaimed and visited by about 100,000 people each year. 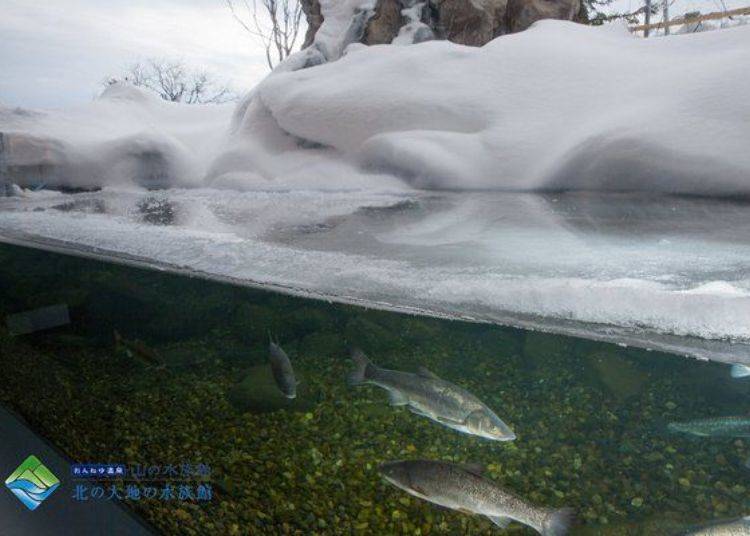 The Four Seasons Tank (a frozen river tank) replicates the bottom of a river the surface of which is frozen over. Here you can observe northern fish that live in extremely cold conditions. (Photo provided by Northern Daichi Aquarium)

Be sure to also stop by the Kamurin Pavilion next to the aquarium. It boasts the world's largest cuckoo clock, Kamurin, at a height of 20 meters, and includes Kamurin World where you can play with toys made from wood for which Rubeshi is famous, and the Craft Studio where you can make things from wood. At the Kamurin Shop you can purchase local specialty items. Children in particular will enjoy this facility. 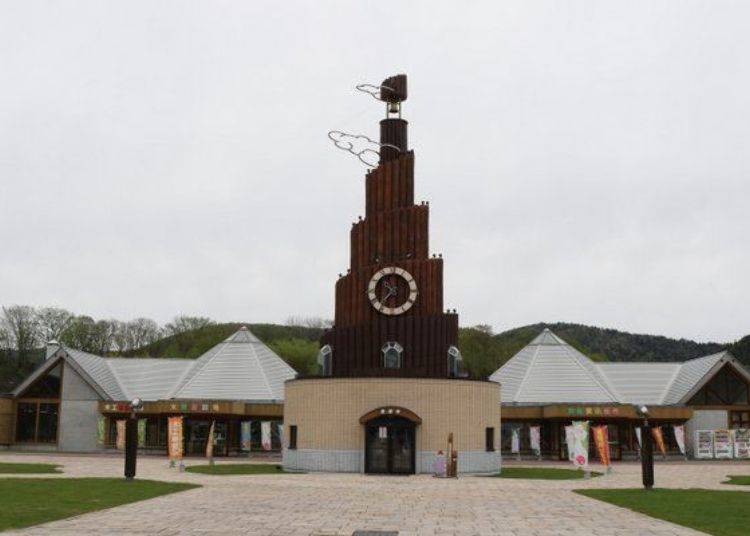 Kamurin, the world's largest cuckoo clock. On the hour from 8:00 a.m. to 6:00 p.m. pigeons and forest nymphs announce the time. *Does not operate during winter (November 4 to the third Saturday in April).

Another popular attraction with families is the Kitakitsune Fox Farm. About 60 northern foxes are raised on the grounds where you can observe them curled up sleeping or frolicking with one another. 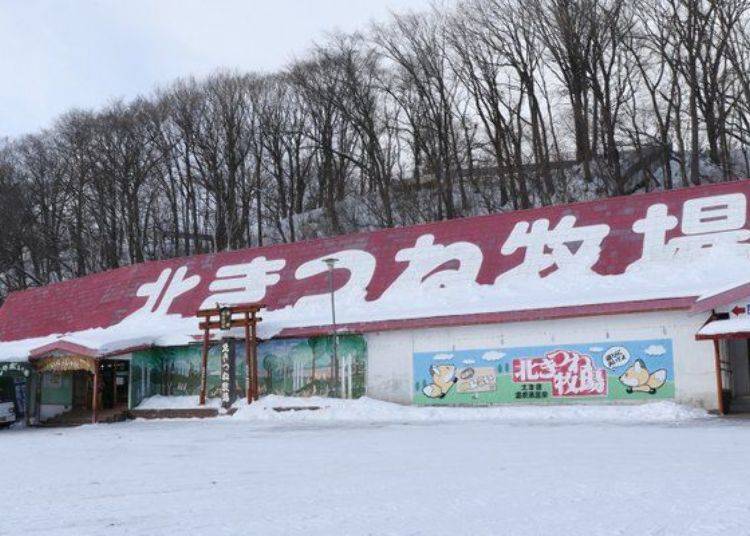 Located about a 3-minute drive north of the rest area. Look for its red roof.

Seeing these adorable foxes up close is a real treat. The foxes are allowed to roam freely within the grounds.
The wild northern fox is considered dangerous because it has a parasite called Echinocoxus which infects humans as well, but since these on the farm have already been vaccinated, they are safe to touch. Even so, often the foxes won’t come close enough to be petted. 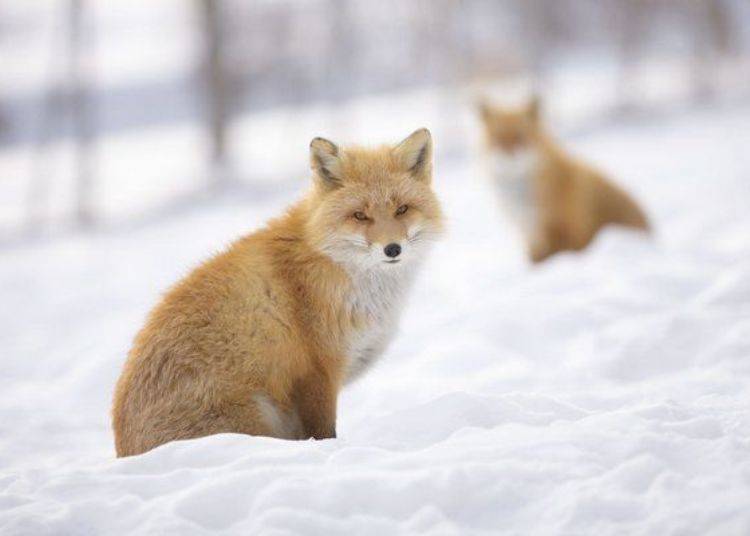 These cute animals are the mascot of Hokkaido. You are free to take photos of them when they approach. (Photo provided by Kitami City Commercial and Industrial Tourism Department Tourism Promotion Office Tourism Promotion Section) 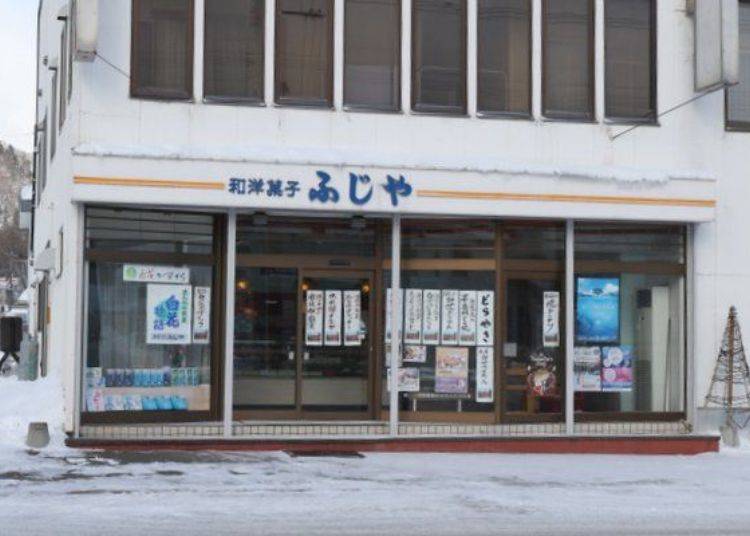 Located about a 1-minute drive east of the rest area. The shop is along Route 39 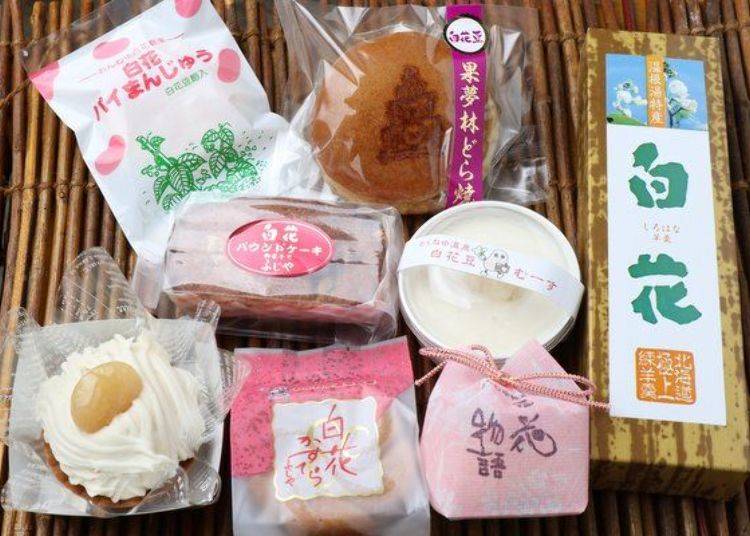 A variety of Japanese and Western white flowering bean sweets

The White Flower Castella, slowly simmered white flowering bean jam wrapped in soft Castella cake, is especially popular (150 yen including tax). These representative sweets of Onneyu Onsen also use the magical waters of the hot springs which is also used in the tanks of the Northern Daichi Aquarium. 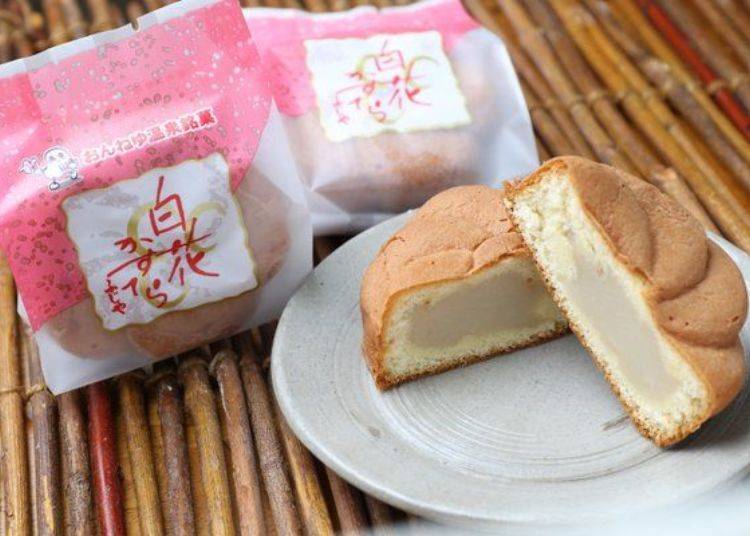 How about it? Among the many hot springs in Hokkaido Onneyu Onsen is not that well known. However, the spring water is of the best quality, something you are certain to notice when you try them.

The area has many attractions in addition to the hot springs, such as an aquarium and the Kitakitsune Fox Farm. It is also easily accessible from Asahikawa and the Okhotsk region making it convenient and easy to visit. 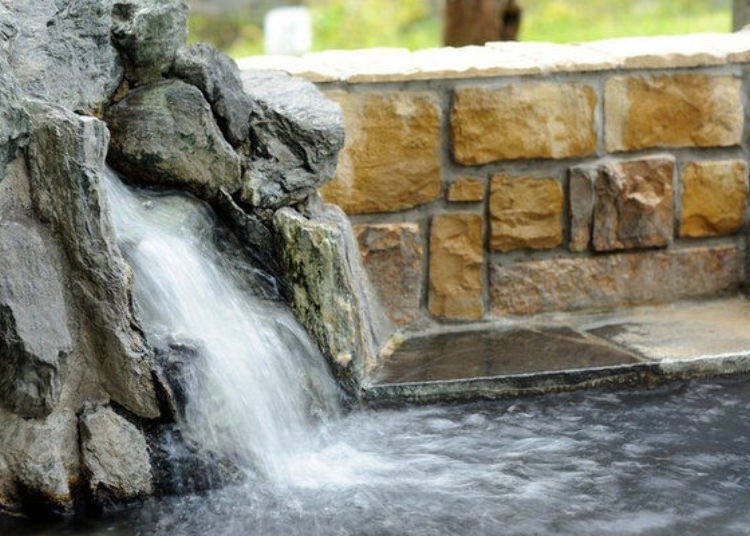 Try the hot springs here and you’ll know how wonderful they are!