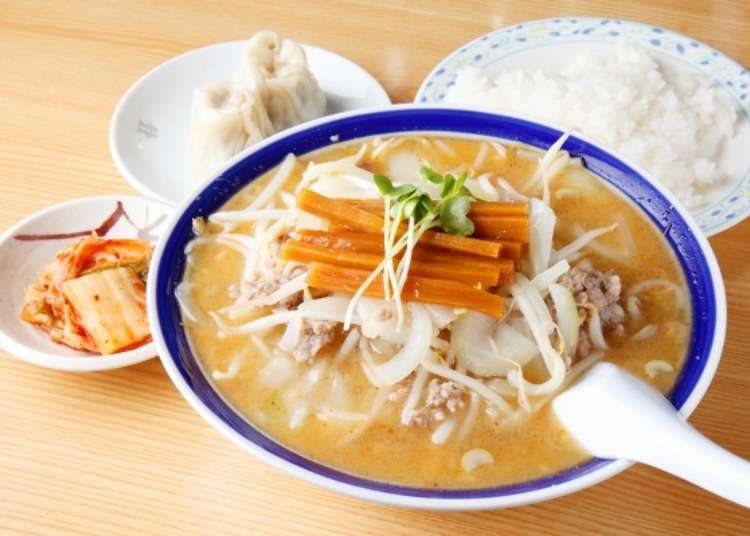 When ramen lovers from around the globe get together and chat favorites, Hokkaido ramen is a bit of a thing! Venture to Sapporo and you'll want to chow down on the world-famous Miso ramen. It is characterized by loads of vegetables and tangy noodles with a heavy and rich miso soup.

Here we visited the shop where this soul-pleasing variety of ramen originated. At this popular spot you will find lines out the door, in a newer style shop where we were able to explore the tradition and evolution of Sapporo Ramen. Let's dive right in! 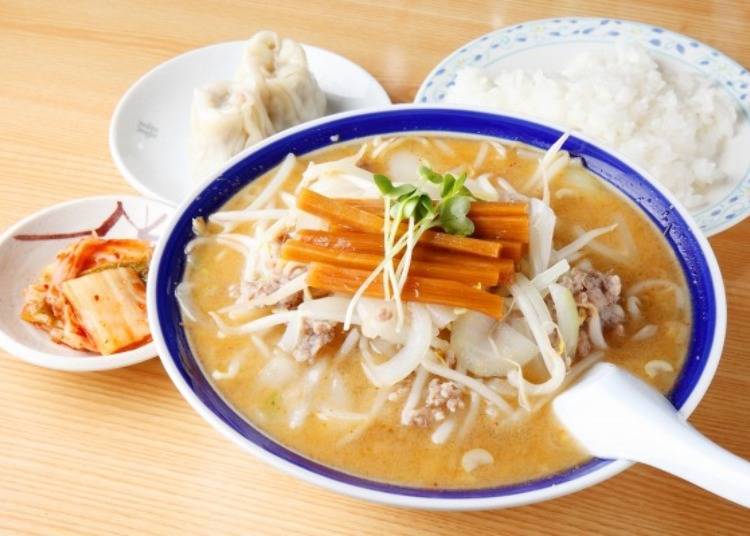 ▲ Sapporo Ramen, while following the traditional flavor, has evolved into various forms at every shop

The medicinal origin of Miso ramen

In order to explore the roots of Sapporo Ramen, I visited “Aji no Sanpei” in the city of Sapporo. This shop is known as the birthplace of Miso Ramen. 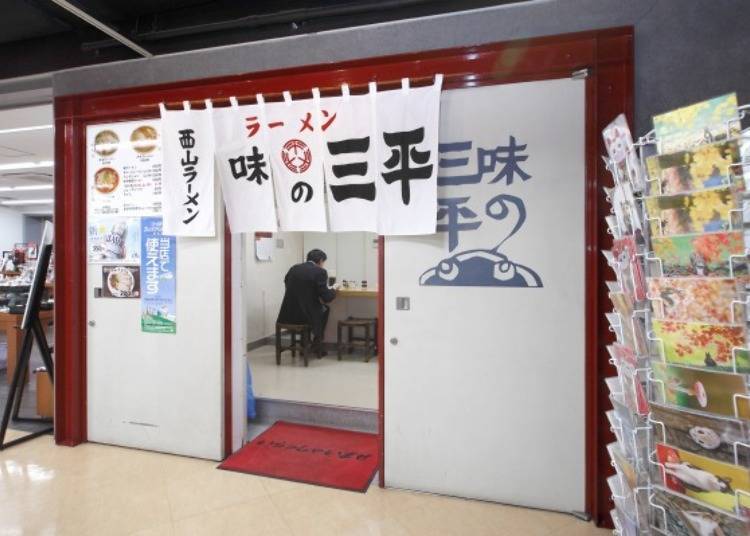 Miso ramen first appeared in the latter half of the 1950s. The founder, Mr. Morito Omiya, devised this dish using hints of miso soup.

In the days after World War II, many people in the world were left malnourished. In this situation Morito said, “I would like to provide nutritious and delicious meals, like a medicinal soup, where a single bowl can be the entire meal.”

Miso was said to be good for the body and was not used much at that time. When constructing the dish many recipes were tested using the additional nutritional boost of garlic, which was rarely used at the time, along with a vegetable stir-fry. 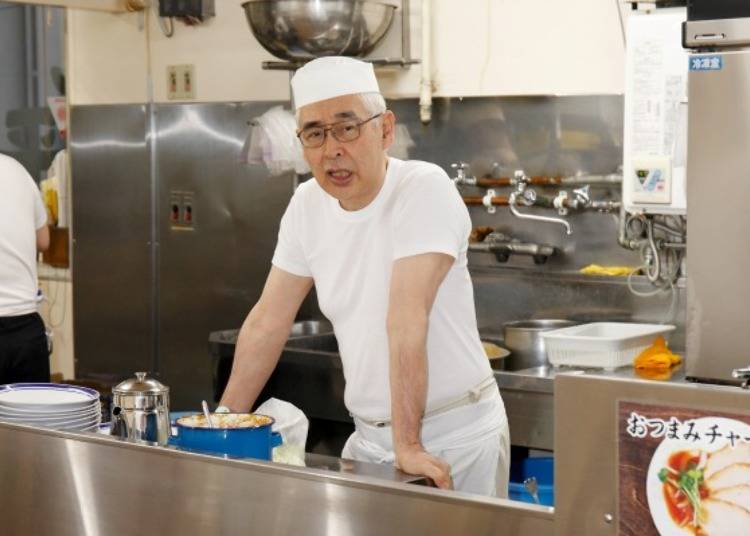 ▲I talked to Mr. Hideo Omiya a decendant and the second generation owner of "Aji no Sanpei"

“I had regular patrons eat many versions of miso ramen that I remade and remade again making decision based on my impressions, and perfected the taste over several years. At that time they would call the dish miso flavored ramen which is now simply called miso ramen.” 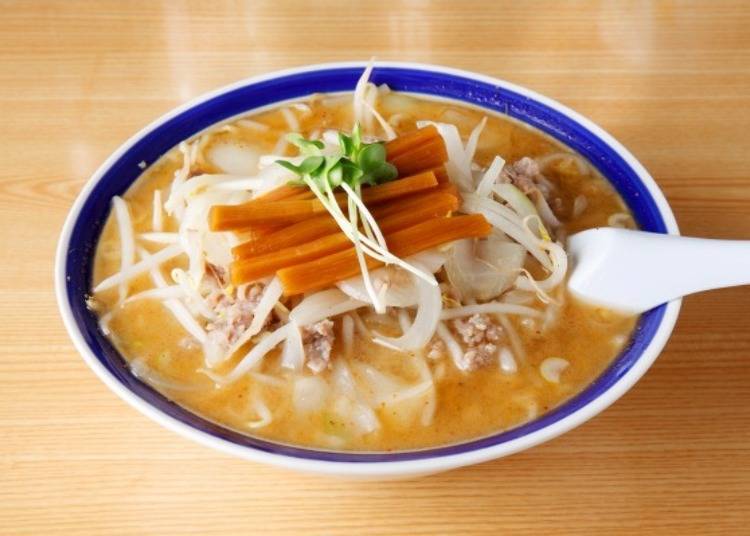 Around 1955, when Aji no Sanpei was picked up by magazines, miso ramen became familiar all over Japan, and Sapporo Ramen quickly became synonymous with miso ramen. 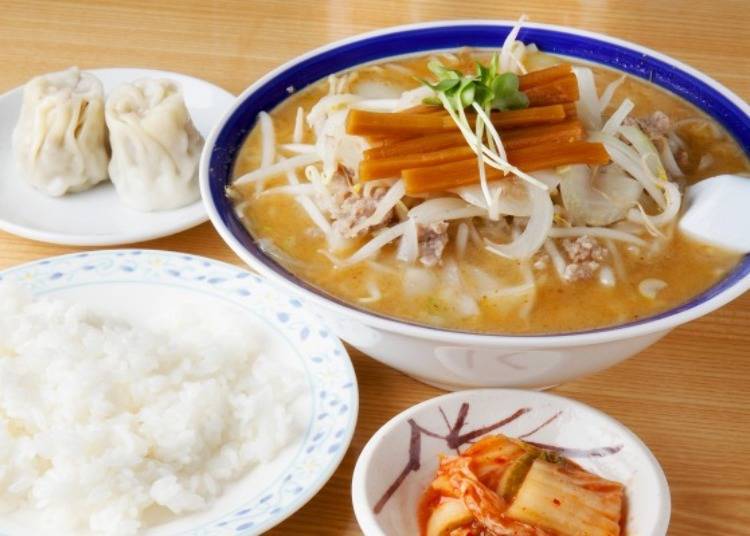 ▲ Here you can order a side of rice for 100 yen (tax included) which comes with kimchi. One popular item is their handmade shumai dumpling, which is 60 yen per piece (tax included).

In addition, Aji no Sanpei is also a pioneer of “ramen rice”. More than 50 years ago, when ramen alone was not enough, this store would add a side of rice served on a dish to customers who requested it. These clients began to order this ramen and rice set as “ramen rice” and that is how this dish is still referred to today.

We decided to taste the miso ramen at Aji no Sanpei 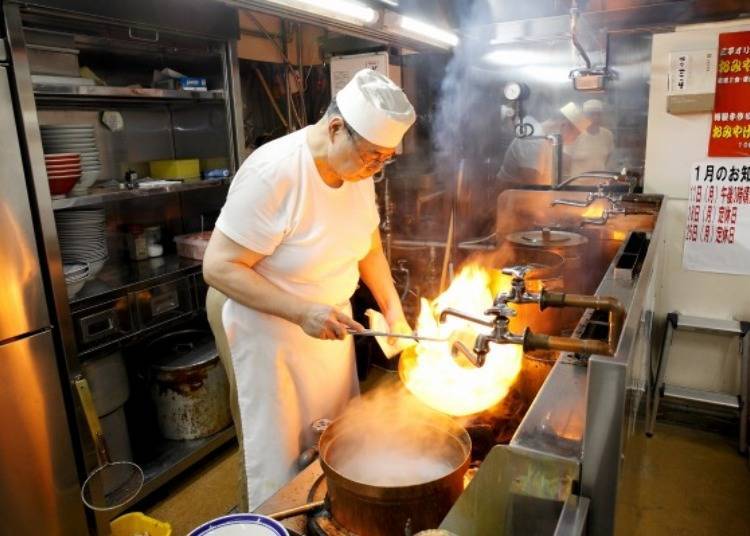 ▲ While steaming noodles, he stir-fries plenty of vegetables in a wok. The chef depicted here is third generation descendant, Kazuto Omiya. 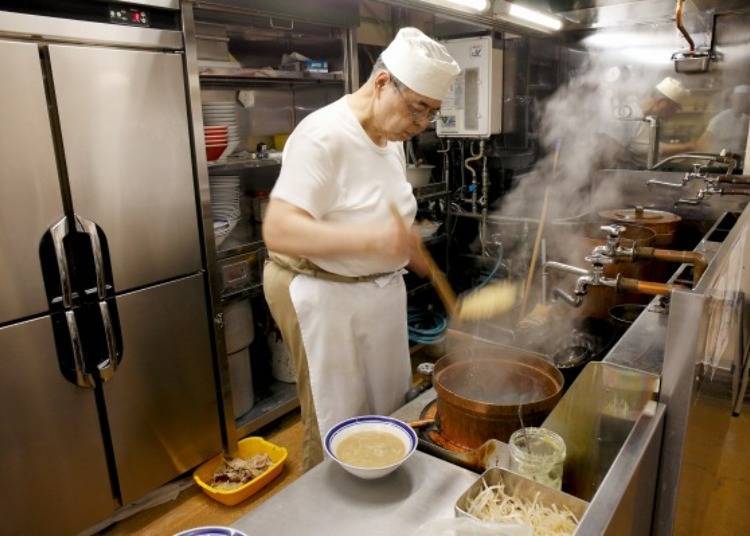 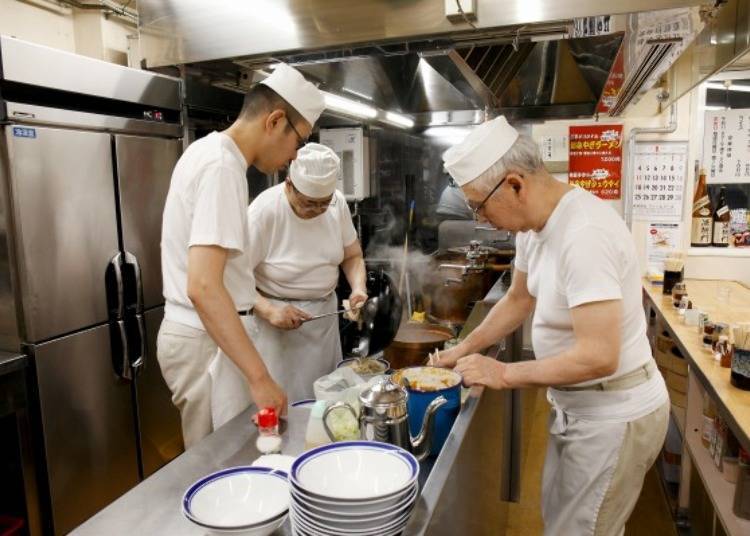 ▲To complete a serving a cup of ramen quickly, three cooks work in unison.

They have prepared a fresh hot bowl of miso ramen. Here the toppings are cabbage, ground beef, fried onions, and bean sprouts. Although the shop used to use sliced pork loin, the minced meat was noted as better for the soup taste, and has become the usual style at the shop. 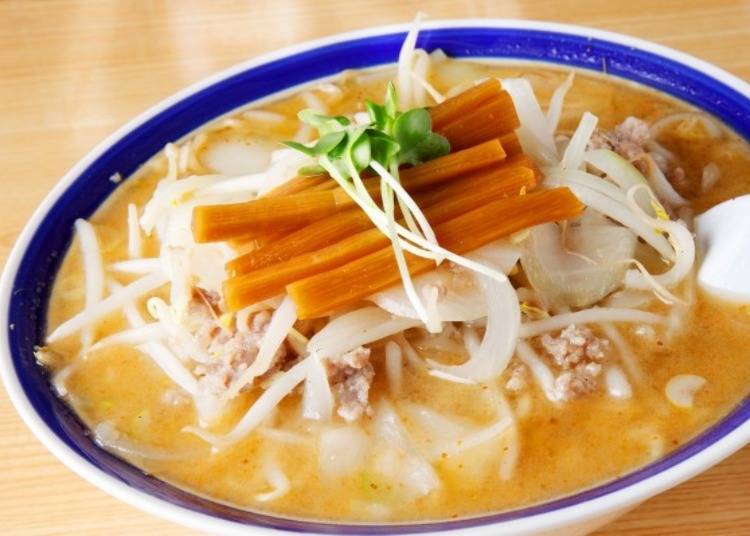 They take their noodles seriously at Aji no Sanpei! In the past, ramen noodles were typically straight, but because Morito Omiya also thought about the characteristic of Miso Ramen, he wanted to make noodles wavy so as to soak up the soup to prolong the flavor and entice the tongue when slurped. That is why he jointly developed special ramen noodles with the Nishiyama noodle company. 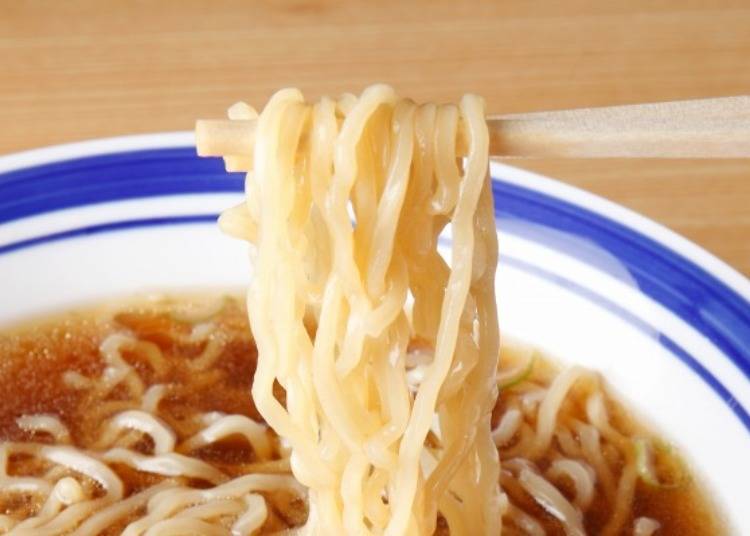 These nearly translucent white noodles are prepared slowly using low heat, which helps the clarity of the noodle come out and give it a rich texture. 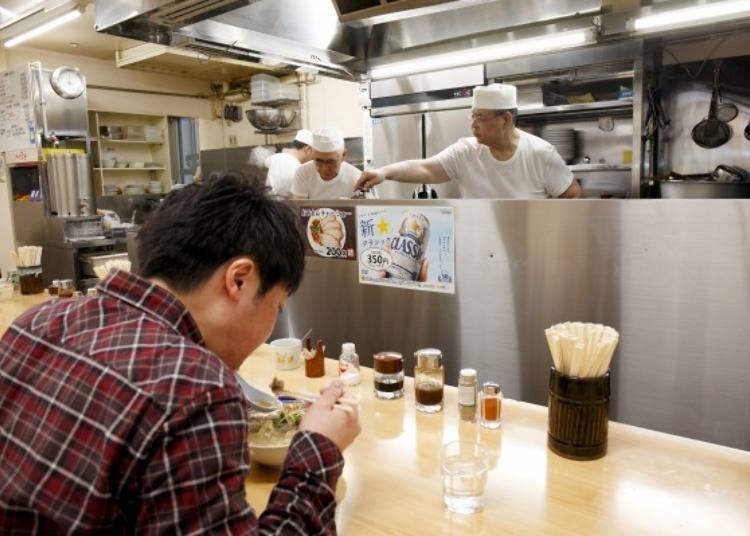 ▲Noodles are super fresh and chewy - be sure to gobble them down quickly!

When the noodles are slurped they may feel chewy with the soup having a rich but unexpectedly refreshing taste. The soup soaks into the noodles, accenting them with a wonderful flavor. 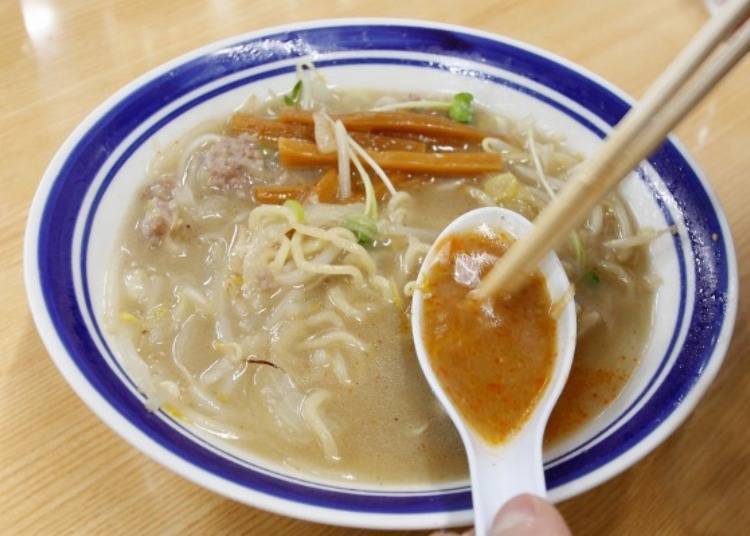 ▲ Here, spicy miso is added to the dish to enjoy a different and spicier flavor.

This miso ramen is the product of repeated tastings by regular customers over 60 years. At Aji no Sanpei, the dish has evolved by gauging the reaction of customers to details of the dish such as the taste of soup and the thickness of noodles. Even today, they continue to receive feedback from the customers, and continue to make changes. 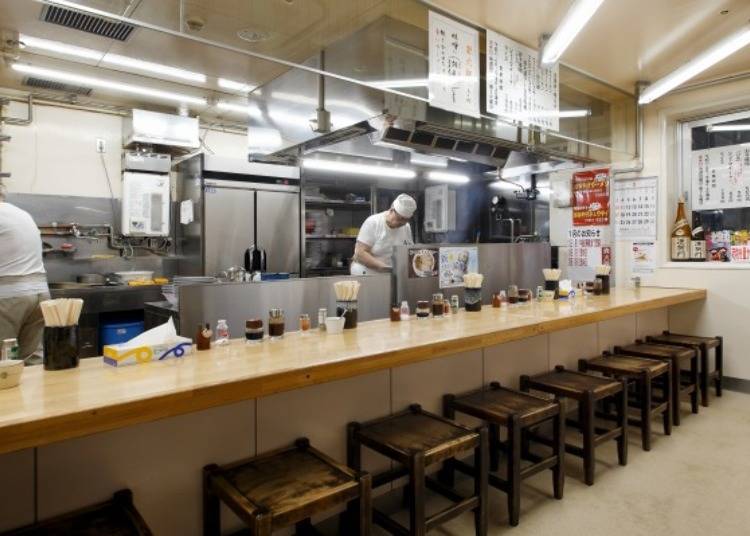 ▲ Seating is only a row of countertops lined up in front of the kitchen which helps the cooks see customers’ reaction to the taste.

“The customer nurtures craftsmanship,” says Hideo Omiya. While the base of the original miso ramen remains, the exact recipe continues to change day by day.

“Noodle Shop Saimi” - An exemplary Sapporo Ramen shop where you will have to wait in line!

Sapporo is a ramen battle area. There are said to be 500, maybe even 1,000 ramen shops within the city. Among them, one of the most popular shops where lines form every day is “Noodle Shop Saimi.” 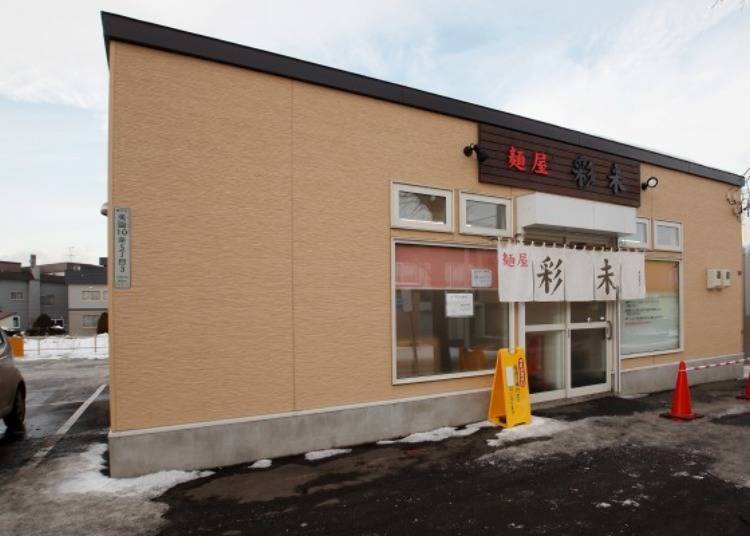 ▲There is a parking lot right next to the store where 10 or more cars can park, but it is usually full during business hours.店の隣には車が10台以上停められる駐車場がありますが、営業中は満車になることも

This shop is so famous in Sapporo that no ramen lover doesn't know it by name. It is not uncommon for people to line up in front of the store before it even opens. Upon hearing these rumors, this store is now visited by many tourists as well. 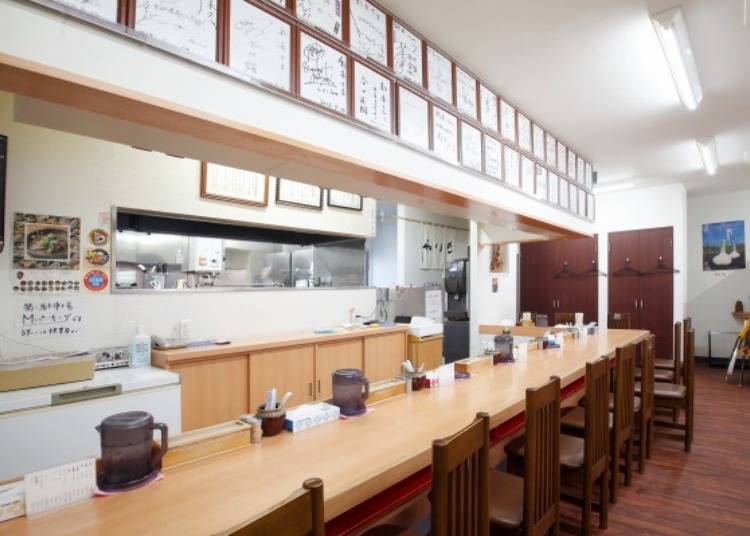 ▲Here you can find counter seats and booths. Letters written by celebrities who visited the shop are posted overhead.

Noodle Shop Saimi has the options of miso, soy sauce, salt, spicy miso, but the most popular of course is miso, with 80% of visitors ordering miso ramen. 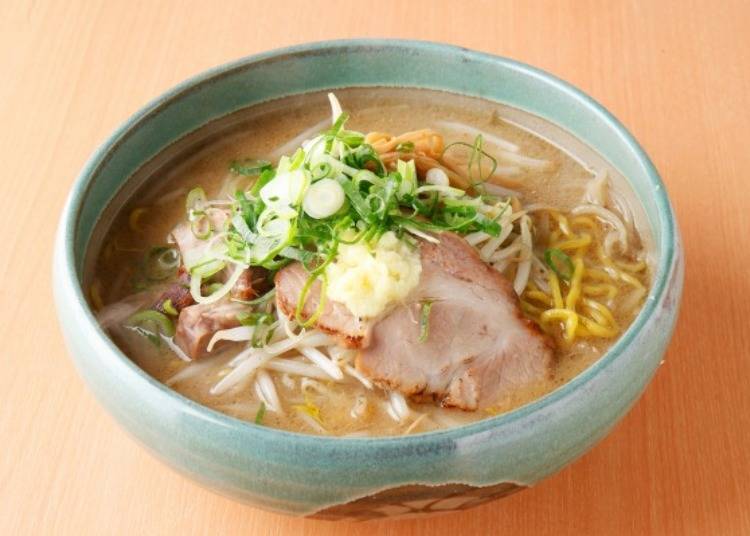 The noodles are medium thick, yellow, and wavy. Menma (fermented bamboo shoots) are added to the dish, where shredded green onions, roasted shoulder loin pork from Hokkaido, and grated ginger are all placed on top of the bean sprouts and served. 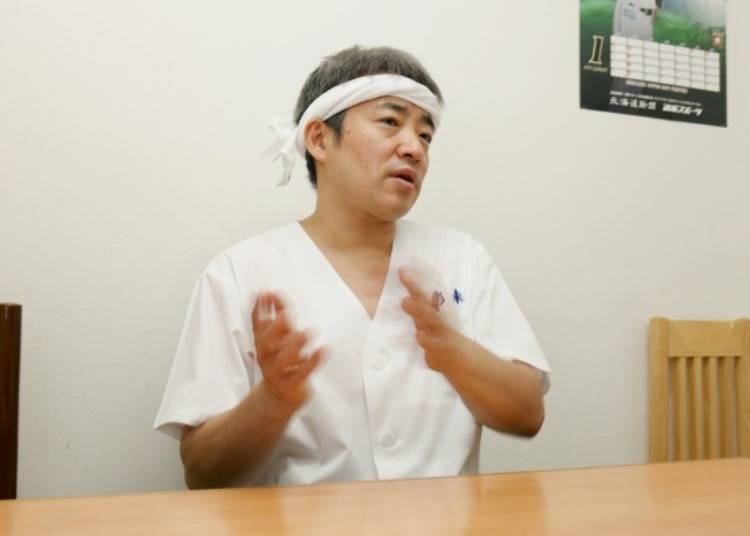 Mr. Oku Masahiko, the owner, says, “Ginger and garlic are the lifeline of our ramen.” He sticks to domestic ingredients as much as possible, with a special focus on local ginger and garlic, a key factor of the soup. The ginger used is from Kochi Prefecture, and the garlic used is exclusively from Aomori Prefecture. Initially he stocked his store using local grocers, but due to fluctuations in quality, he has contracted with farmers in Kochi Prefecture and Aomori Prefecture and purchases directly from them. 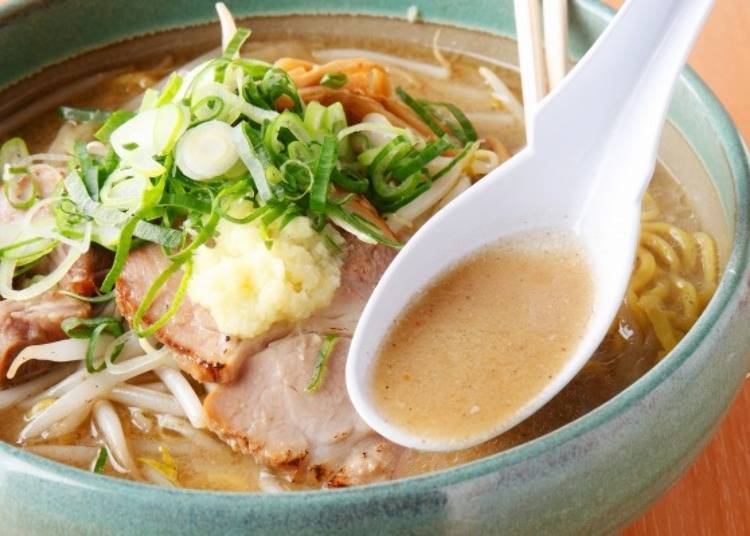 ▲This mild soup flavor will have you drinking every last drop!

The soup is a mix of a chin-tang soup which is boiled pork, vegetables, and garlic, which is then mixed with their own miso sauce. Although it seems to be rich at first sight, there is not much fat, but instead has a rich flavor with a mild taste. Mixing the ginger in the soup adds a refreshing zing, but also gives a strong flavoring creating a mysterious taste. This is a delicately refined soup with an elegant flavor. 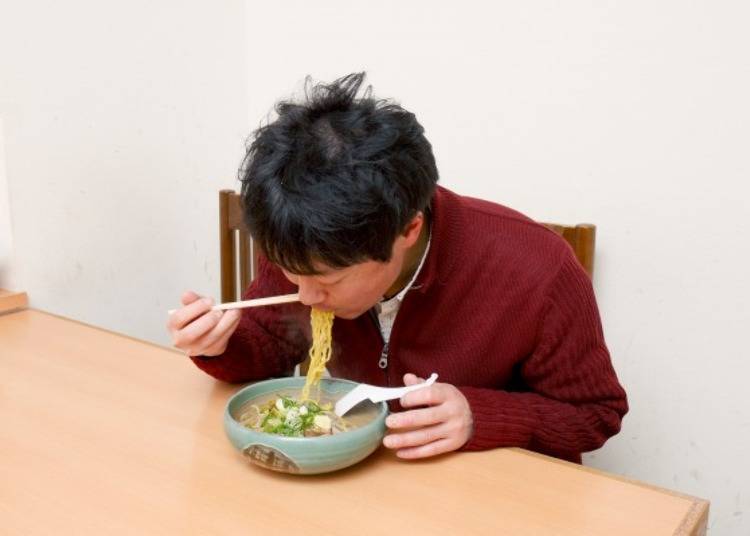 ▲Savory noodles in a refreshing soup. Too tasty to eat quietly!

If you follow the golden road of Sapporo Ramen you will surely come across “Noodle Shop Saimi.” While there may be a line to go in, it will surely be worth the wait!

“Men-Eiji Hiragishi Base” opens with a new style of Sapporo Ramen!

There has been a recent rise in the number of shops offering creative ramen dishes while still following the basics of Sapporo ramen. In the midst of them is the new and popular restaurant Men-Eiji Hiragishi Base, where lines are formed before the shop opens. They focus on soup and noodles to prepare a ramen dish that is like no other. 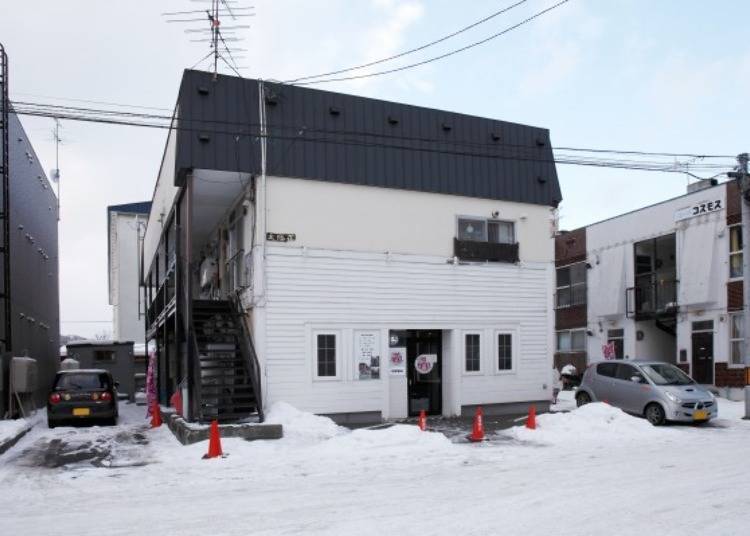 ▲Located in a residential area, it could be mistaken for a regular apartment! The middle of the building is the entrance to the shop 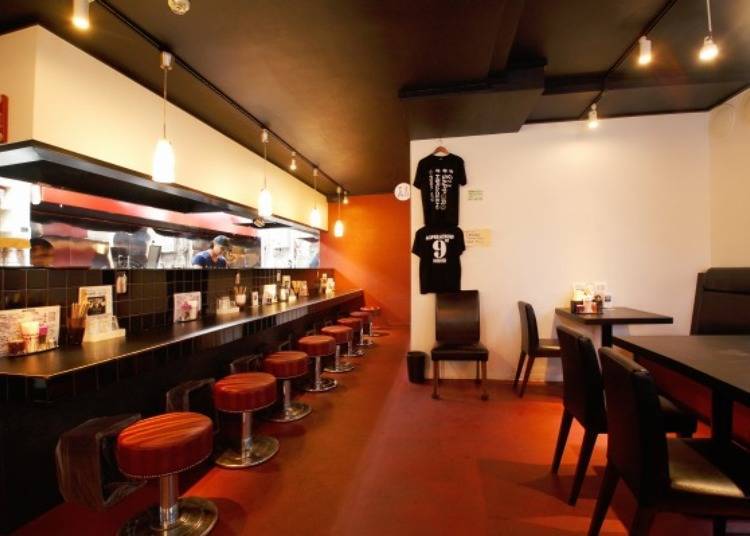 ▲Contrary to the outside appearance the inside has a chic and calm atmosphere!

Men-Eiji Hiragishi Base uses local Hokkaido ingredients to the extent possible, making ramen that does not depend on chemical seasonings. Especially when dealing with the noodles, wheat produced in Hokkaido is used and manufactured all by their very own noodle machine. They have a well-established reputation for making noodles, which based on demand is also sold wholesale to several shops in Sapporo city. They prepare four different types of noodles for use at their own store according to the type of ramen. 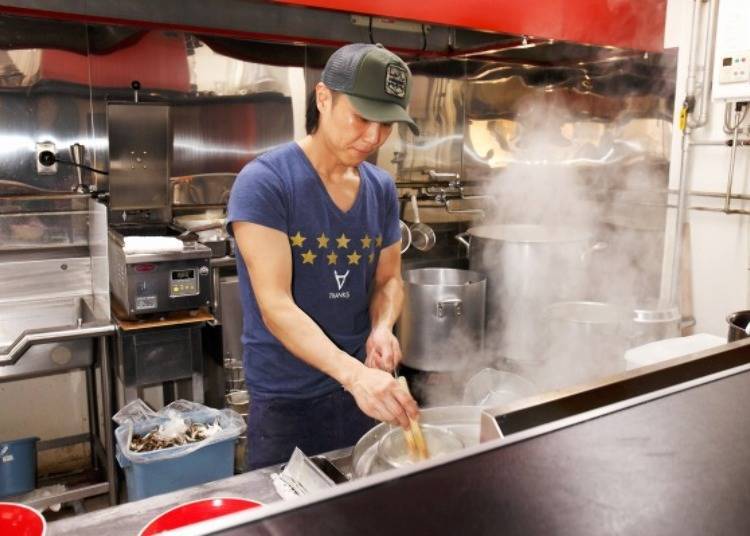 ▲Depicted here is the shop owner Jun Furukawa (Jun), who says, “Because it is a ramen shop rather than a soup shop, I would say that my focus in on making noodles.”

At the store’s opening, Miso Ramen was not served. The reason being because the shop owner Mr. Furukawa simply did not like miso ramen. However, one day, Jun overheard a customer say that Sapporo's Miso Ramen only tasted of chemical seasoning and has lost its traditional flavor.

“It seems that Sapporo's food culture is being stupid, which is regrettable. There are many good ingredients to be found in Hokkaido, so then I thought that I could make it and started my own miso ramen dish.” 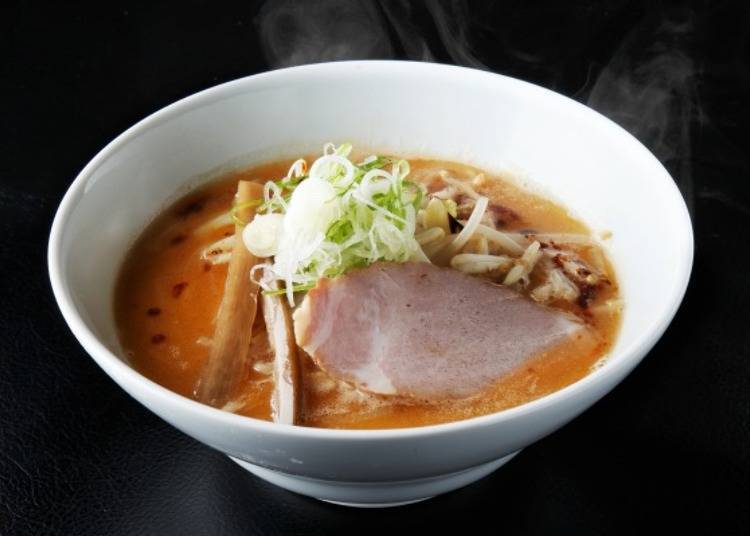 ▲ "Sapporo miso eiji style" (850 yen, tax included) the dish inspired by the customer's words. This dish has a mild flavor with a faint hint of garlic and ginger

Most of the ingredients are from Hokkaido. Because the standard menma topping is only available if imported, instead of using it, it is prepared with deep-fried burdock from the town of Assabu in Hokkaido. 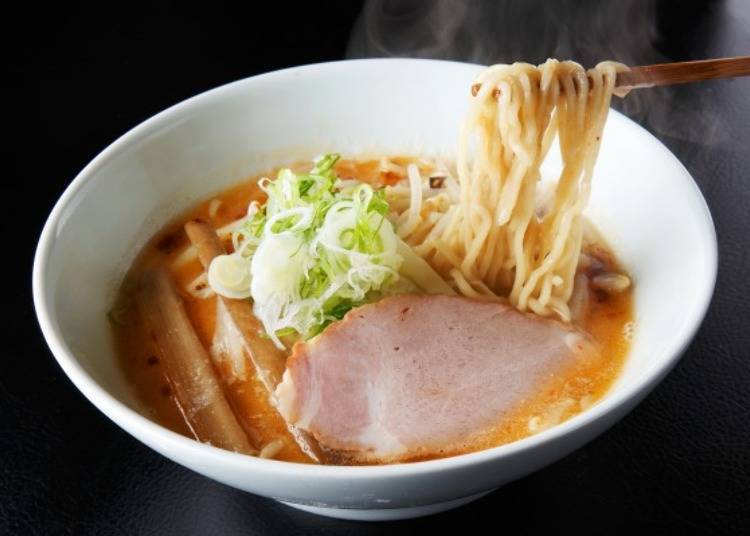 ▲The ingredients used for these homemade noodles are only wheat flour, salt, and water. With the classic wavy noodles used in Sapporo ramen

The wheat used is a variety known as “rulurosso” from the town of Kodaira, Hokkaido. Ruluroso wheat is primarily used for pasta. When using other kinds of Hokkaido wheat the noodles will become too chewy. So in order to retain the ramen noodle texture, after trying many different wheats, settled on rulurosso. Jun said that when the rulurosso wheat from the town Kodaira was tested, he knew it would be the perfect choice. 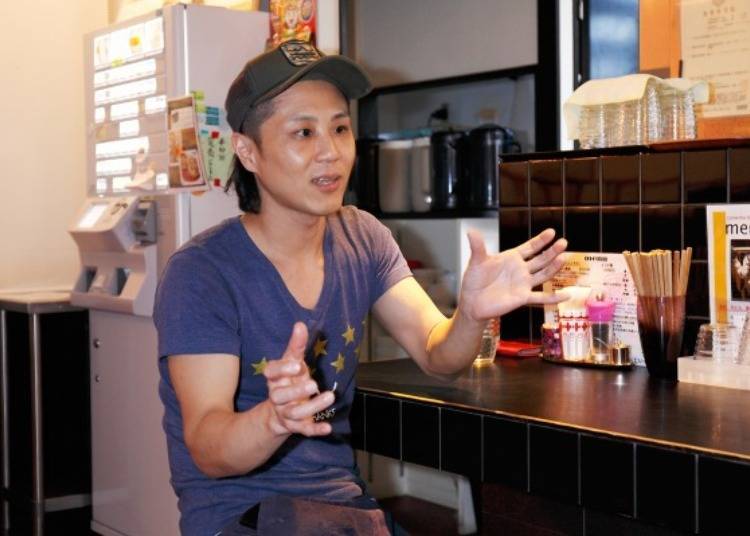 ▲Mr. Furukawa spoke passionately about good ingredients needed not only for French and Italian cuisine, but also for ramen.

The main menu item that was offered when the store initially opened was a “Seafood tonkotsu soy sauce ramen.” This dish is characterized by rich fish juices that were added to soy sauce ramen flavored with pork bones.

The soup stock is made with the refreshing taste of a gelatin containing yuzu citrus peels. When this is melted into the soup little by little, the soup starts out as creamy and over time becomes increasingly salty and refreshing. 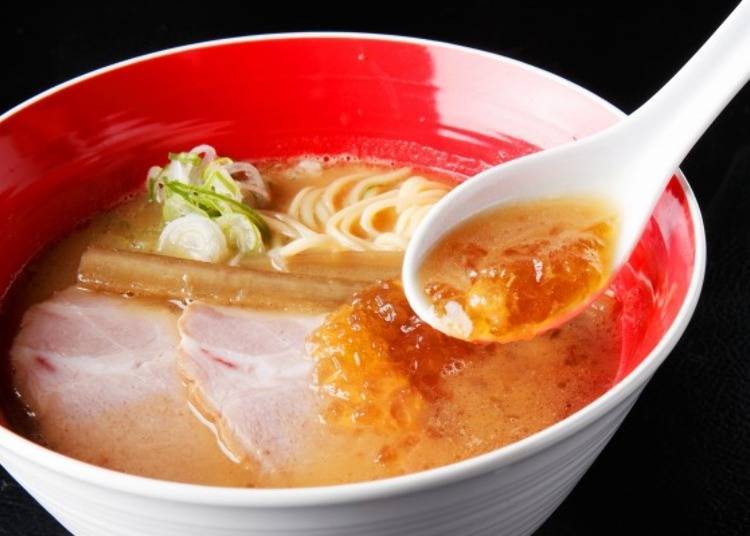 The idea to make this gelatin was from a tea pudding that he ate in the basement of a department store. This dessert had a hint of that sweet rich pudding coupled with a bitterness of tea. That is where his idea came to create juice from fish soup which thickens over time. 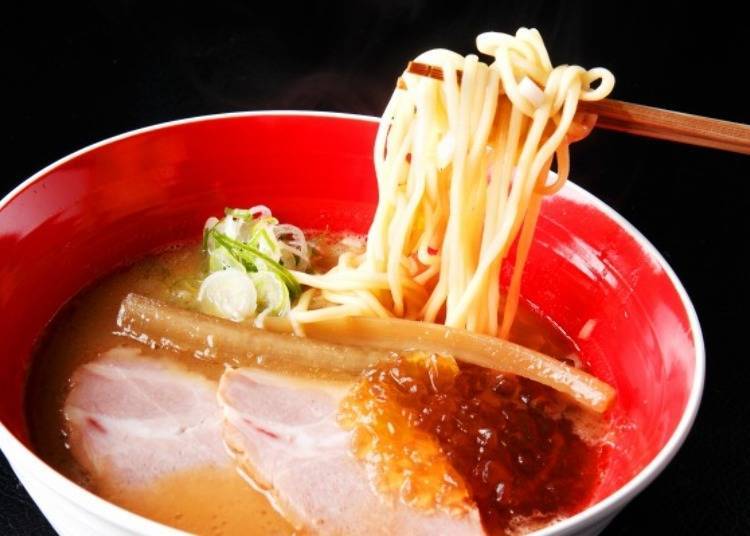 ▲This dish is prepared with this strong soup and straight noodles

The motto of Men-Eiji Hiragishi Base is evolving while following the traditional method and style of Sapporo ramen. You can taste the original Sapporo ramen.
Origin Miso ramen, the very popular “royal road” miso ramen, and “evolved” miso ramen. There are also many Sapporo ramen stores that are all around and not only those located inside the city. Which ramen would you like to try? Eat and compare!

Ramen recommendations for Sapporo! A selection of unique dishes to try in Susukino.