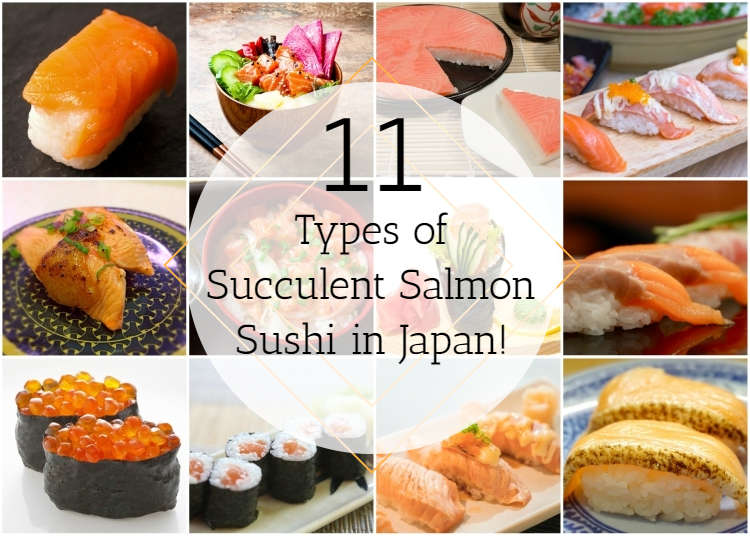 From Nigiri to Oshizushi! 11 Types of Succulent Salmon Sushi in Japan

Salmon sushi is a popular sushi which has found fans around the world, it is absolutely delicious with a flavor and fattiness which is most pleasing and is packed with omega-3 acids without being too rich or oily. It might seem like a kind of sushi which has been eaten in Japan since forever; after all it is such a taste explosion why wouldn’t it be?

However, up until about 30 years ago salmon was only ever eaten cooked, never raw! Pacific salmon has a parasite which meant that if it was eaten raw it would make you very ill, so it simply wasn’t an option for sushi. So what changed?

Back in the 1970s and 1980s Norway had a problem: it had a lot of salmon being fished but not enough customers for it – Japan seemed to be the obvious choice as a new market, but Japan already had salmon and wasn’t very interested. However, there was something special about Norwegian salmon: it could be eaten raw!

Eventually in the mid-90s a Japanese company agreed to import frozen salmon and a new age of salmon sushi was born. Today, salmon sushi can be found all throughout the country, from kaiten-sushi (conveyor belt sushi) spots to exclusive sushi restaurants. 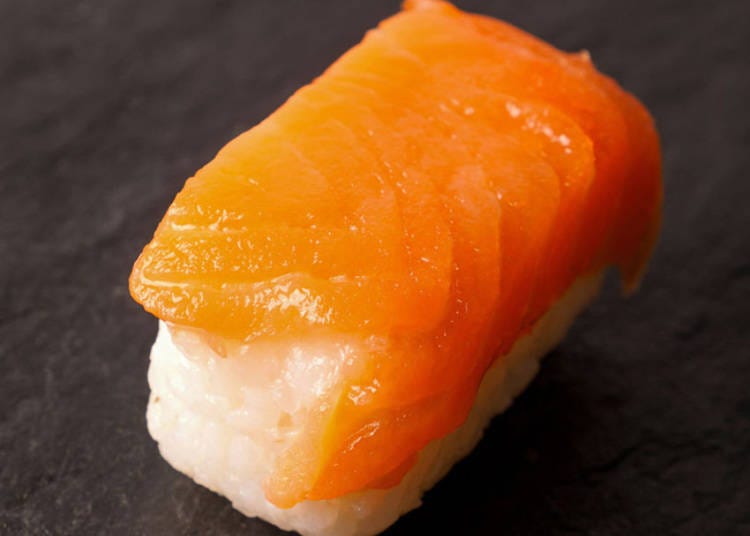 Nigiri style pretty much epitomizes sushi, so it makes sense to start with this kind of sushi. Salmon sushi is often eaten as nigiri. A ball of shaped, vinegared sushi rice is topped with a delicious looking slice of salmon. You can then dip this in soy sauce, or with wasabi and soy sauce, or alternatively salt and a bit of citrus. In homage to how salmon used to be eaten it can still be ordered grilled too. You can experience both the old and new way of eating salmon! 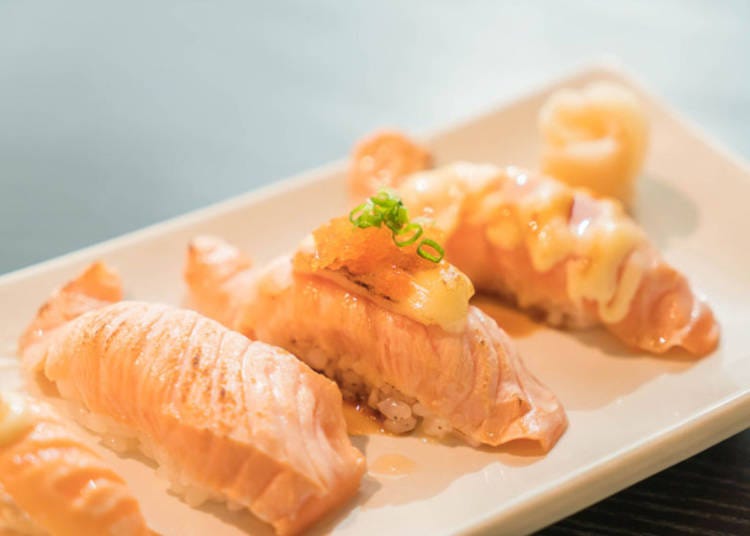 A number of toppings can be enjoyed with salmon nigiri, especially at kaiten-zushi shops, which often come up with unique, non-traditional combinations for their sushi. Look for more traditional topping pairings like salmon with tobiko (flying fish roe) to more unusual combinations like salmon topped with shredded cheese or marinated salmon with mayonnaise and thinly sliced onion. 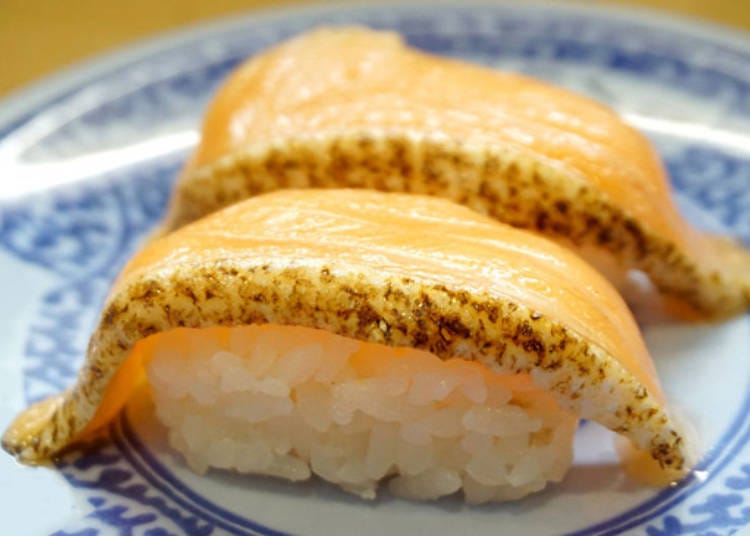 Aburi nigiri is a version of salmon nigiri which features as regular salmon nigiri sushi that has been broiled aburi style. Usually this means it has been cooked with a small blowtorch before it is served. This creates an amazing texture as the fattiness of the salmon ends up with a richly grilled surface and a creamy center. 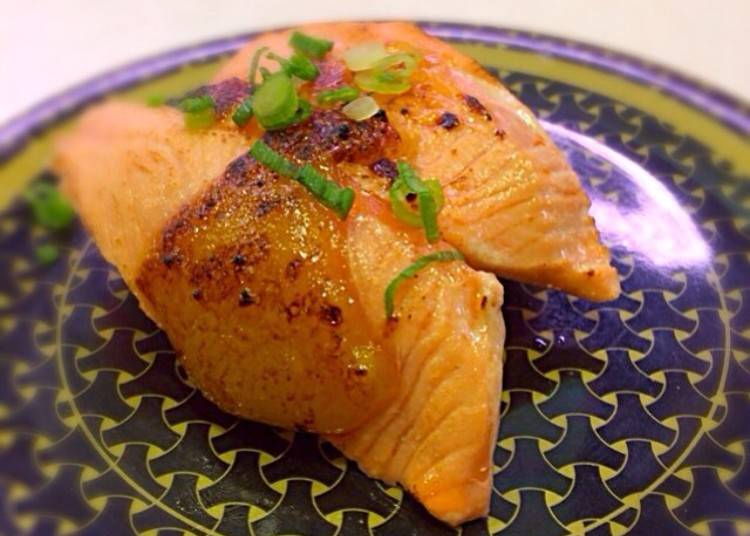 Saikyo miso originated in the Kyoto region and has a delicate, naturally sweet flavor that pairs wonderfully with the rich fattiness of salmon. Saikyo miso-broiled salmon nigiri sushi is made with salmon that has been marinated in saikyo miso and slightly cooked with a blowtorch. 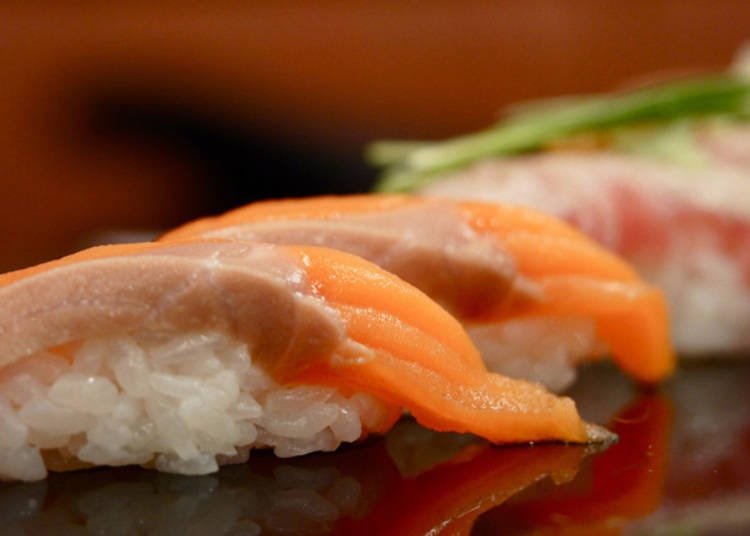 This is an option which if you see it, you must order it! Salmon belly is similar to tuna belly, both being cut from the fatty part of the fish’s belly. Salmon belly is incredibly rich, not to mention tasty, but it is also an uncommon menu item. This means you probably won’t find it in any casual sushi place or at a kaiten-zushi shop, you are going to have to go to a top-quality sushi restaurant in order to partake of the joy which is salmon belly. 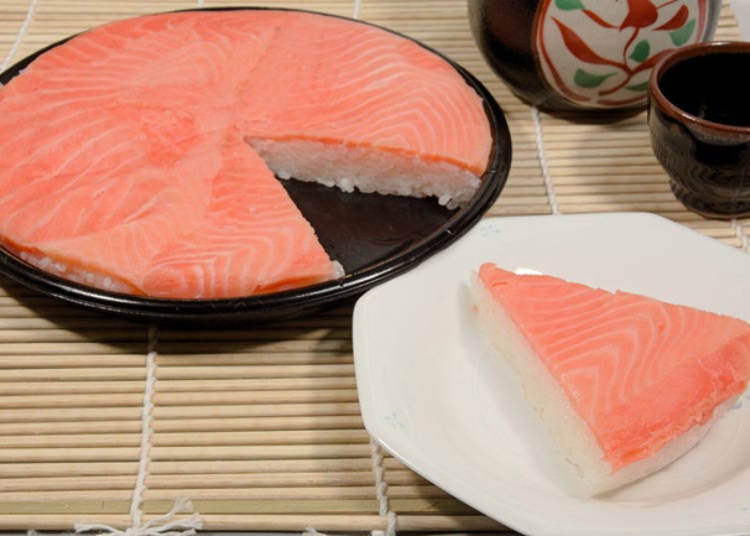 Oshizushi, or “pressed sushi”, is a traditional style of sushi that originated in the Kansai region in the west of Japan. It’s made with a wooden mold into which sushi rice, fish, and other ingredients are added, then pressed to form a firm block shape. The sushi block can then be sliced into individual pieces in a triangle, rectangle, or square shape. Salmon oshizushi can be made with smoked, raw, or aburi-broiled salmon. 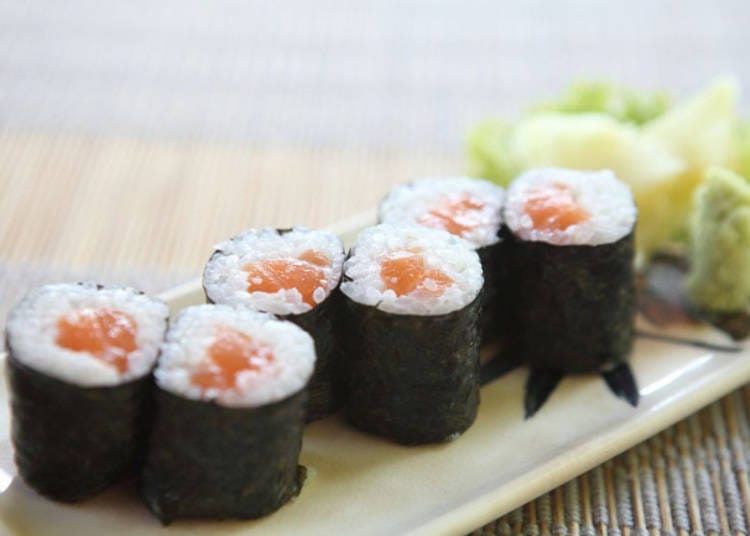 Hosomaki is made from a square piece of nori seaweed, which is then covered with rice and usually has one further ingredient added before it is rolled, and cut, to make thin sushi rolls with the rice and fish inside the seaweed. It is a healthy choice, and salmon hosomaki from Japan was the inspiration for the Philadelphia roll that’s popular in other countries, a sushi roll filled with salmon, cream cheese and cucumber. 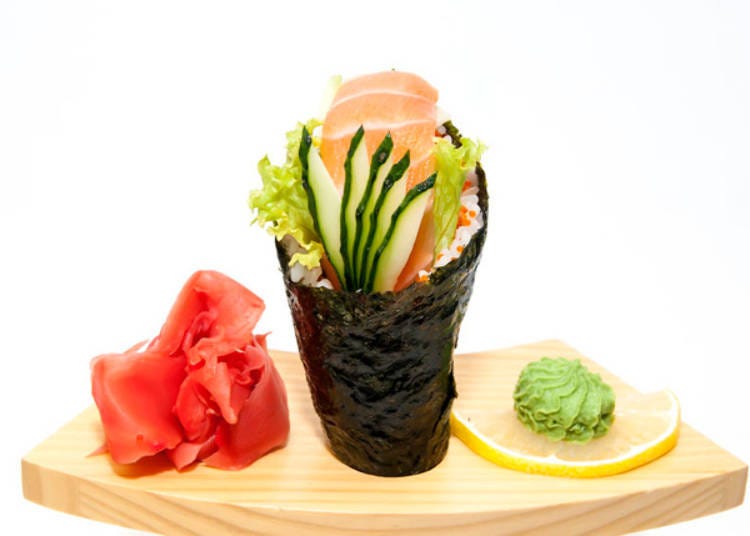 Like hosomaki, temaki features nori seaweed too, and salmon temaki, or hand rolls, are a very easy way to enjoy salmon sushi. This is again made with a small sheet of nori seaweed, which is then topped with sushi rice, sliced salmon, and other ingredients, and then it is rolled into an ice cream cone shape. However, this is no ice cream cone; it is a delicious way of enjoying sushi! It’s very easy to hold and to eat-no chopsticks are required. 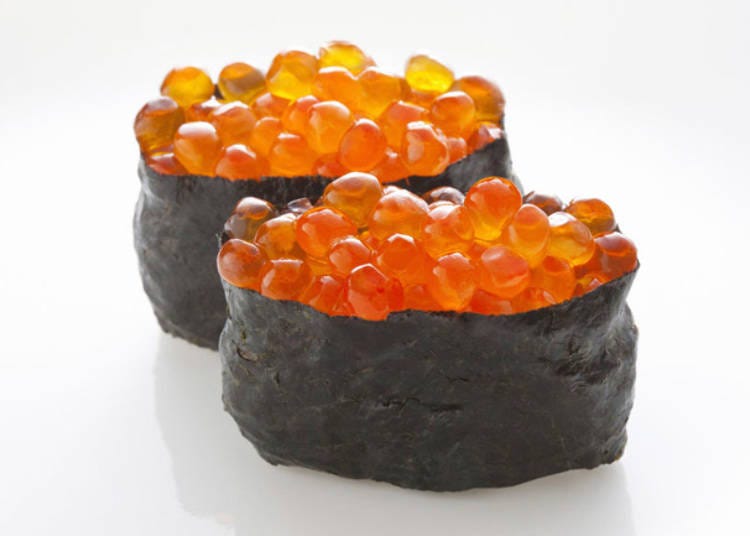 Salmon sushi doesn’t just mean the use of salmon meat, you can also eat salmon roe, otherwise known as ikura. For this kind of sushi the ikura is marinated in soy sauce. When eaten in sushi, it’s typically served “gunkan maki”, or “battleship”, style. This type of sushi consists of a strip of nori seaweed wrapped around a ball of sushi rice, which creates a space at the top on which to spoon the loose ikura. The glistening orbs of ikura have a bright, jewel-like color and a buttery flavor. 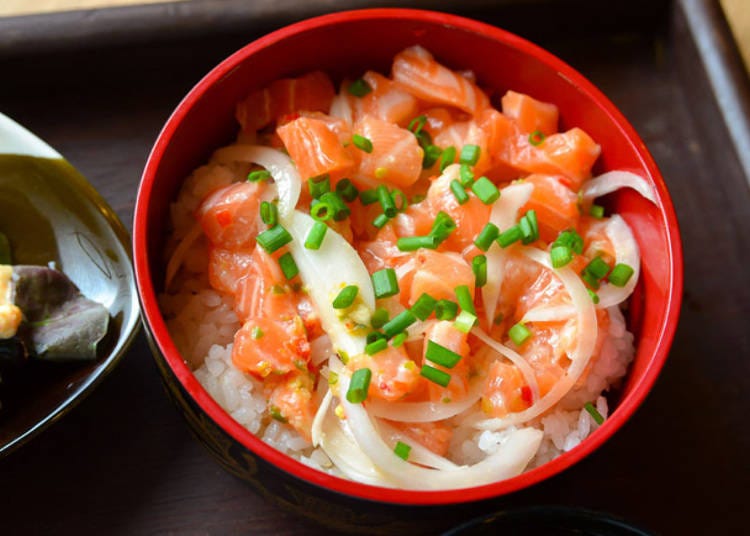 Chirashizushi, which roughly translates to “scattered sushi”, is a style of sushi where a lot of toppings are scattered over a dish of sushi rice. Salmon chirashizushi often includes finely shredded Japanese omelet and ikura salmon roe. In addition to raw salmon, smoked salmon or salted salmon flakes can also be used. 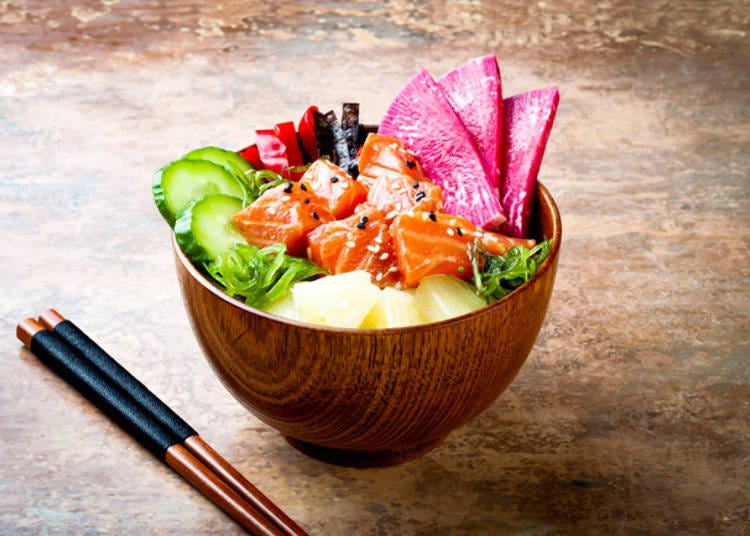 Zuke-salmon refers to salmon that has been marinated in either mirin, soy sauce, vinegar, sake, shio koji (fermented rice), and sake kasu (a pickling agent left over from the sake making process), or a combination of these. It may be used as a nigiri topping, or chirashizushi-style. The surface of the marinated fish can be grilled to create a sumptuous caramelization.

Salmon sushi is a favorite for Japanese and non-Japanese alike, so it is kind of shocking that it has only been enjoyed in recent years. Today, thanks to Norway, we are all able to enjoy this sushi in all its forms, which means it is a dish which is not to be missed. You just need to take one bite of salmon nigiri to realize how tasty it is, and on top of that it is such a healthy fish to eat too. With the above guide you can now try the different varieties of salmon sushi, but don’t eat too much! It might be healthy, but as in all things moderation is best!

Do call ahead and make a reservation if you’re going to a higher-end sushi restaurant. If you can’t speak Japanese, have your hotel concierge book it or ask a friend. Be on time and don’t be a no-show!

Don’t wear any body fragrance such as perfumes or colognes, as the scent can interfere with the aroma and flavor of the sushi.

Do try to finish everything you order. If you’re at a kaiten-sushi restaurant, make sure not to take more than you can eat. When you’re finished eating, it’s best practice not to linger at the table or counter chatting as there may be other customers waiting to enter the restaurant.

[MOVIE] Uobei: Ordering High Speed Sushi with Multilingual Tablet!
28 Varieties of Sushi You Have to Try!
[MOVIE] How to Open Convenience Store Onigiri!
*This information is from the time of this article's publication.
*Prices and options mentioned are subject to change.
*Unless stated otherwise, all prices include tax.