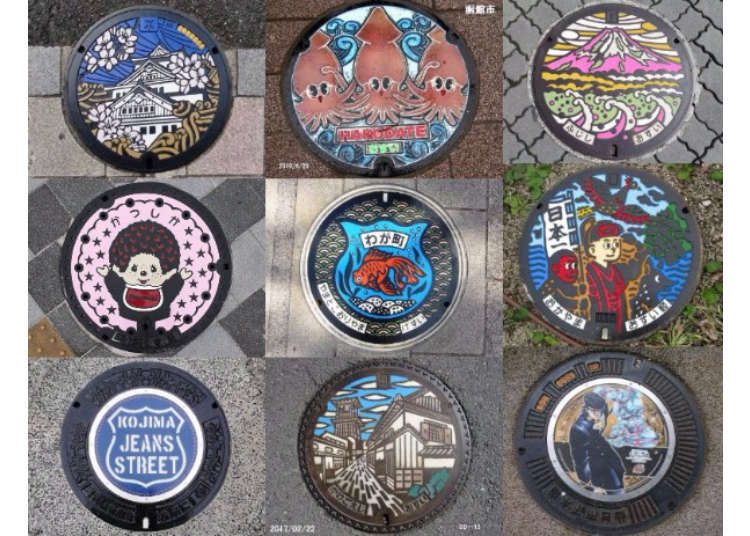 Have you ever heard of the word "manholer"? This word refers to a person who likes manholes. It has been 40 years since "Design Manholes", or manhole covers with designs, came to Japan.

As these lids gradually increased, so did the number of manhole enthusiasts, called "manholers", throughout the country. With a favorable turn of events, the number of "Manhole Cards", introduced last year, has already exceeded 1 million pieces. Who would have thought that opening a manhole event would be a great success and would lead to the debut of enthusiast sites in China and the U.S.? The organizers were also bewildered by the unexpected enthusiasm and wondered why these people were so captivated with these covers.

What Are Design Manholes?

Originally, these manhole covers had geometric patterns. But in 1978, these covers featured fish pictorial designs and were embedded on the roads of Okinawa for the first time. Adorned with tourist spots and mascots, these covers gradually increased and were featured in municipalities as the pride of its people. Since they are not regulated as long as they are safe, the design and color of these covers quickly evolved. 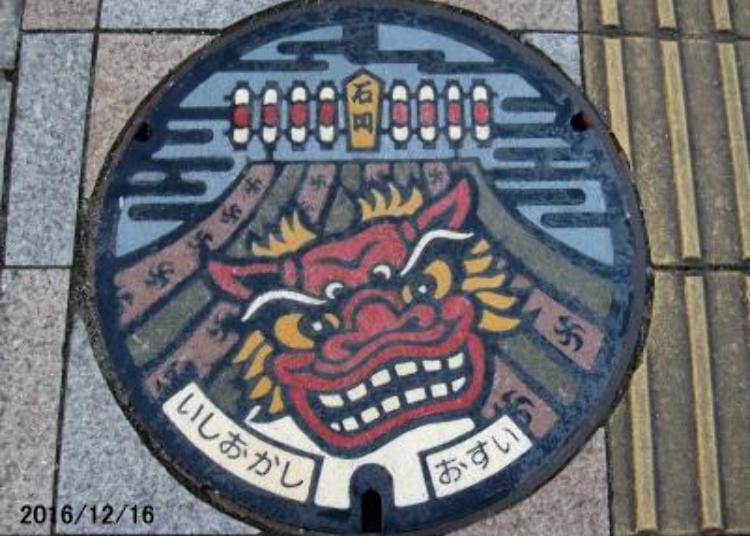 A manhole cover in Ishioka City, Ibaraki Prefecture featuring the Ishioka Festival, one of the three major festivals in Kanto

How Many Design Manholes Are There in Japan?

There are 15 million manhole covers embedded on the roads throughout the country, with over 12,000 variations as of August 2017. Manhole covers last for around 30 years, and 100 thousand covers are replaced every year. However, there are not many standard designs that can be replaced by designed manholes.

Where Can I Find Manhole Art in Japan?

We asked Mr. Hidekazu Yamada of the Gesuidō Kōhō Platform, an organization promoting the sewage system, about manholes covers in tourist spots.

"You can see these covers all over Japan, but among the most popular are the clock tower cover in Sapporo, the cover depicting the streets of Koedo in Kawagoe, and the ones featuring the Osaka Castle. You can also find a Monchhichi cover in Katsushika, Tokyo, a place which is associated with the said character. Famous for being the birthplace of local jeans, Kurashiki is where you can find the Jeans Street, which is filled with stores. Along this street, you can spot an indigo-blue manhole cover featuring the street’s logo." 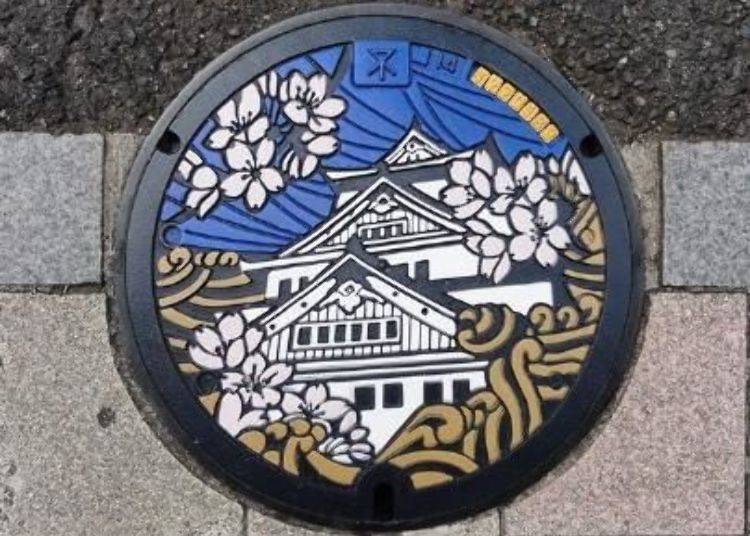 A manhole cover featuring the Osaka Castle, cherry blossoms and water current located in the south side of the main road of the Semba Shinsaibashi-suji Shopping District. 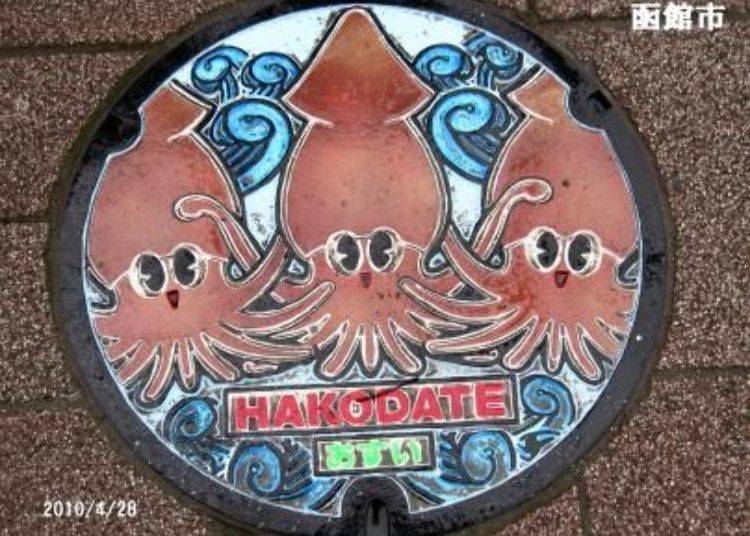 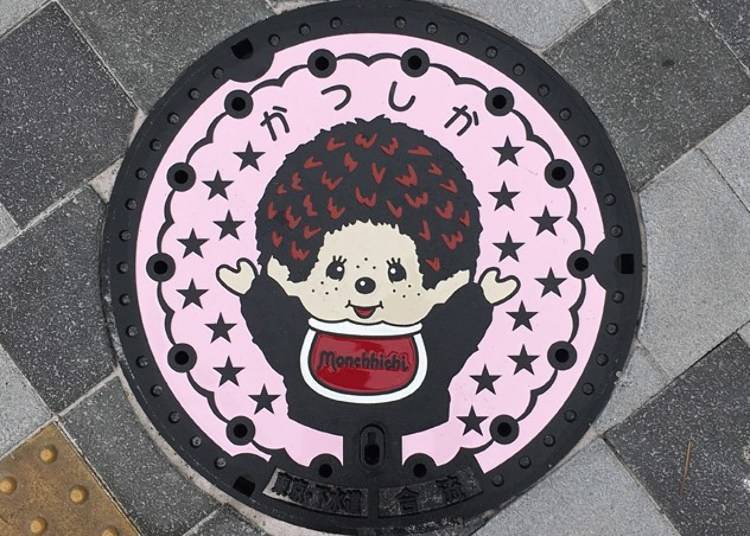 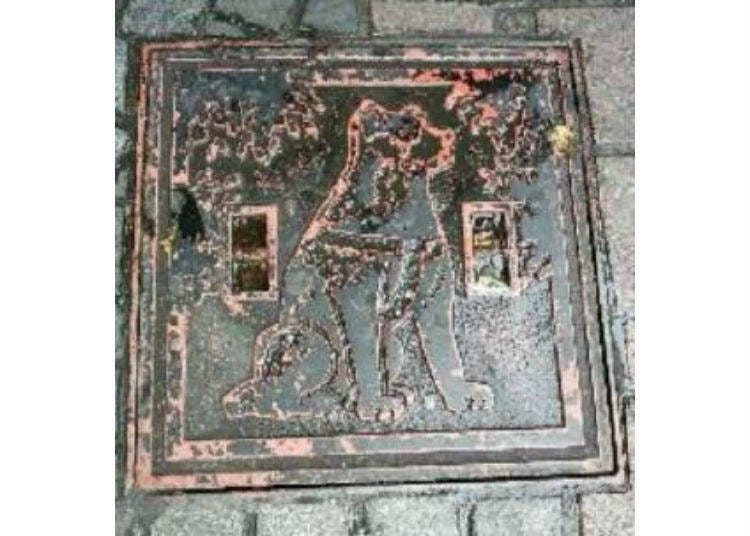 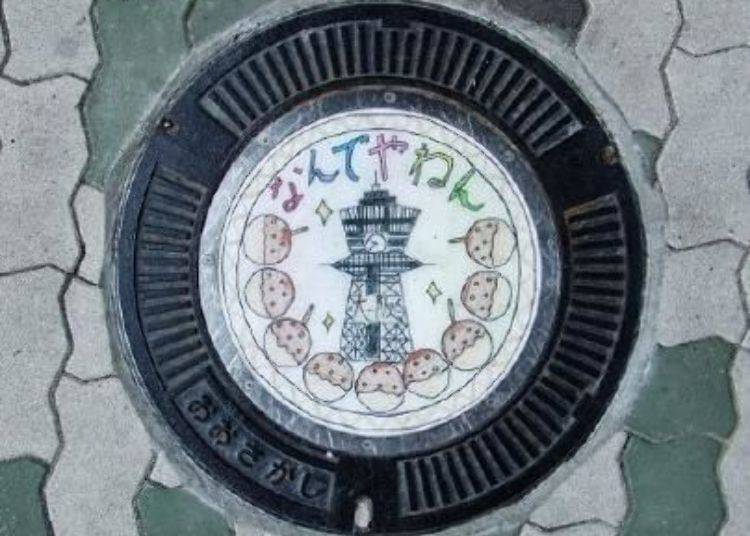 A cover featuring a design of a selected work during the Sewage Work Exhibition '14 in Osaka-shi.

According to Mr. Shunske Nagashima from the manufacturing company Nagashima Foundry, designing the covers was originally a suggestion from manufacturers. "This started with a proposal to the municipality for a manhole cover adorned with a small pear flower." During that time, this proposal didn't get much attention. At present, it is common for the municipality to pitch designs featuring the pride of the locality, such as flowers and scenic spots, to the manhole contractor and the manufacturer will create the design. Other designs are based on paintings from student contests and designs made by designers.

Are there regulations on the design?

According to Mr. Nagashima, when proposing a design, the fact that this will be embedded to the ground and stepped on should be considered.

"At first, these covers adopted a flower motif engraved with ginkgo tree leaves. At times, they were also integrated as part of the standard design. Shrines and temples were generally avoided, but recently, there have been cover designs based on famous churches and rope talismans. Basically, a design is manufactured if it receives a strong public support."

There were also instances where the municipality requested to make and install certain designs that were eventually withdrawn due to opposition from the citizens.

"A manhole cover of a wild bird was installed, and enthusiasts expressed that stepping on a protected species is a deplorable act. There was also a manhole cover bearing an image of a local hero, which people claimed to be in poor taste. In both cases, the manhole covers were removed."

Why Are These Covers Super Popular Now? 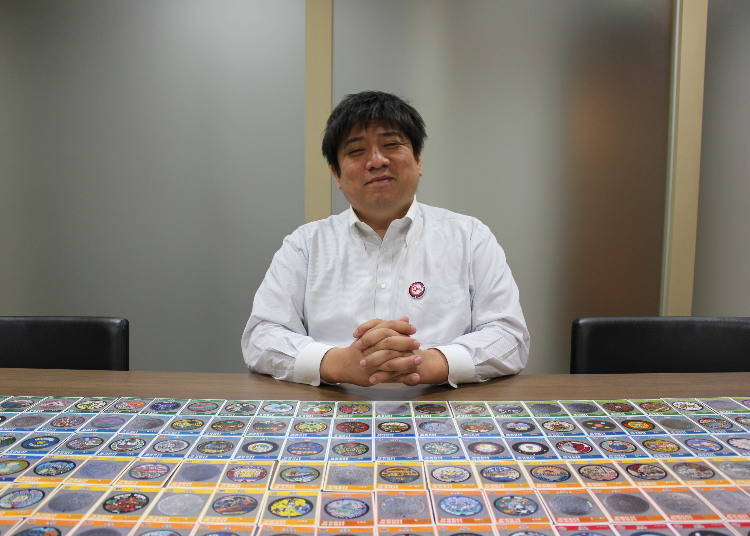 We interviewed Mr. Yamada who is tirelessly working in the public relations of GKP aside from also being a manhole cover manufacturer.

"It all started with a nationwide campaign to improve the image of the sewage system. But it wasn't just about the campaign. I was inspired to work on this effort upon realizing that this could be something big if stakeholders just worked together to make this possible. When I surveyed the people's image of the sewage system, most of the response described it as 'dirty, smelly and dark'. Building on this reality, I asked myself what good points the sewage system has. That's when I noticed the design manholes which are in every nook and cranny of this country. I realized that utilizing this would possibly improve PR."

Mr. Yamada was originally from the toy industry. He took a hint from kids’ card games, channeled the collector within him, and developed and released "Manhole Cards" in April 2016. After placing pamphlets about the sewage system, its office and related facilities were flooded with people looking for the cards. The event was even featured by the media. This immediately placed the spotlight on the design manholes. As of August 2017, 222 cards have been issued and the total distributed cards have surpassed the 1 million mark.

On the other hand, Sū manages a website that collects photos of manhole covers called "Japan Manhole Cover Society", which provided several photos for this article. She said that she has been feeling the hype around manhole covers in the last 3 years.

"When I posted my photos on the homepage that I made in 2009, other people wanted me to post their photos too, so I started accepting submissions. It took four years and two months for the number of contributors to go beyond 100, but since then, it has been increasing by 50 every 6 months. Since 2013, these photos have also been featured in television and magazines."

The conditions gradually warmed up for the group, and it seems like their break came with the introduction of Manhole Cards.

Is It True That There Are Manhole Goods? 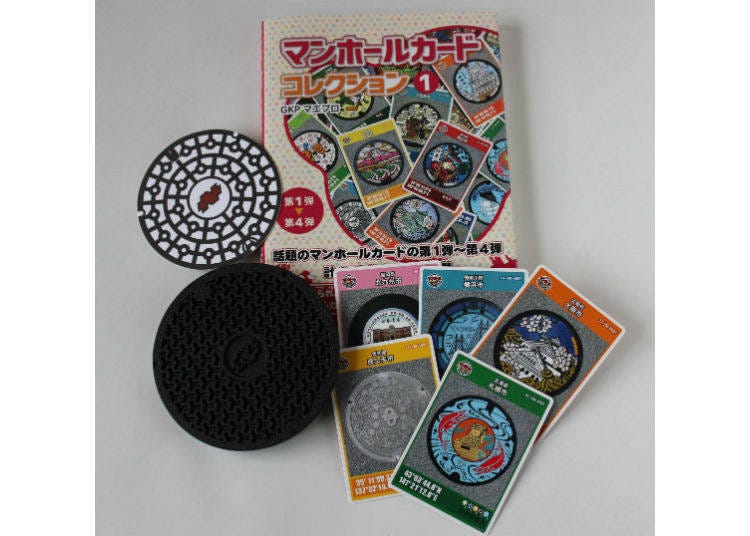 From the right is the book comprised of the 222 Manhole Cards, and next are five manhole cards. To the left is an iron coaster based on a 1/6 manhole replica bearing a type of hexagonal pattern called Bishamon kikkō pattern, and a paper coaster featuring the standard JIS pattern which enthusiasts call a “plain cover”.

Aside from the 222 Manhole Cards currently being issued, a book containing information of these cards was released in July. With the help of municipalities, various items were also released such as card holders containing information of the locality. Aside from this, there are also keychains featuring manhole designs, paper coaster and an iron coaster based on a 1/6 manhole replica. All of the items above can be purchased at the "Manhole Summit" among other events.

What Is the Reason Behind the Hype Around Manhole Covers? 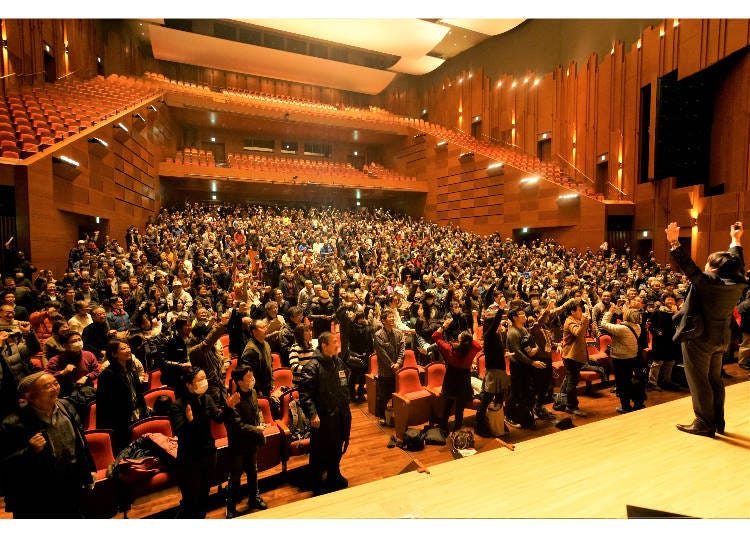 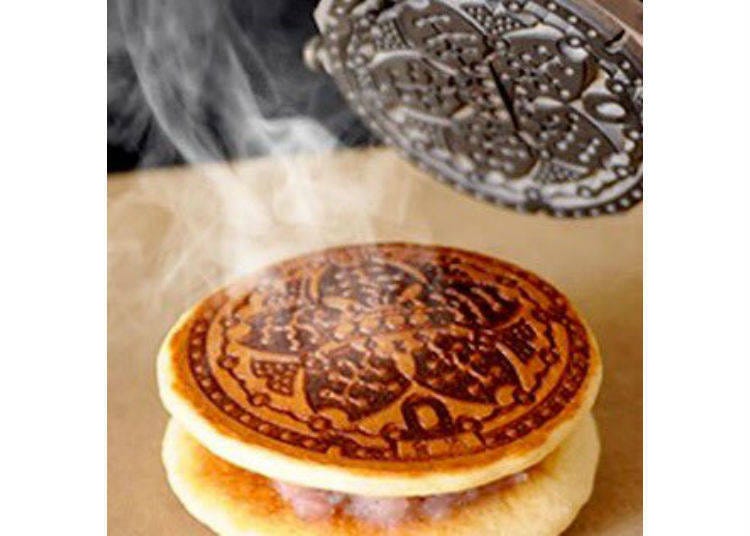 Above is a photo of the summit filled with cheers for manhole covers. The manhole dorayaki, a sponge cake with red bean jam, popular among the participants, features a manhole cover design commonly seen in Tokyo.

According to Mr. Yamada, he was surprised when 3,000 participants poured inside the venue once he opened the gates during the "Manhole Summit" held by GKP. The venue could only accommodate 600 people, but the event ended in great success beyond the organizers' expectations. The event featured messages from well-known individuals from various fields, merchandise sale, manholer announcements, and dancing. This news was also widely covered by local news outlets.

Recently, Maebashi City in Gunma Prefecture replaced old manhole covers and decided to sell each old manhole about to be recycled, for 3,000 yen. This later evolved into a fierce competition between bidders with more than 100 people seeking to purchase these 10 covers. Among these was a very old manhole cover believed to be from pre-1970s. One manholer even requested the city to preserve the cover rather than selling it as it was very valuable. As of writing, Maebashi City is still deciding on the matter.

What are design manholes? How did it start? How strong is the hype surrounding these manhole covers? We hope that we answered all your questions regarding design manholes. In a companion article about manholes covers in Japan, aside from featuring the 12,000 kinds of design manholes, we will also look into its continuous growth throughout Japan and the people's infatuation toward its aesthetic.

*Aside from manhole photos which were taken for this article, several submitted photos were also published. For more information on the Japan Manhole Cover Society, see their website at http://sky.geocities.jp/usagigasi1f/.