HOME You’re a Fan of What...?! 3 Reasons Why Japan is So Obsessed with Manholes 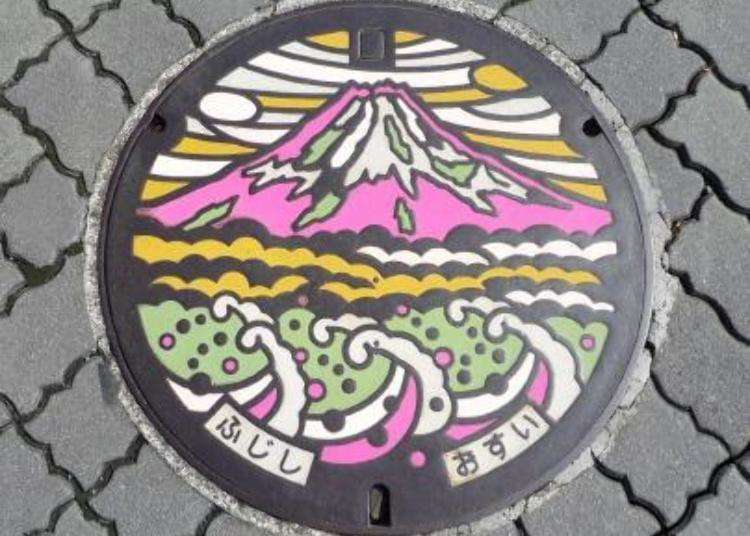 The images that come to mind upon hearing the words “manhole” and “sewer” are dark, smelly, and generally unpleasant. At least for most people on the planet – Japan, however, has a different stance on the issue. In fact, the country is obsessed with manholes! The fascination goes so far, there’s even a manhole trading card game. Instead of collecting Pokémon cards, manhole enthusiasts try to get their hands on the rarest, most beautiful manholes instead. Weird, you say?

Step into the world of Japanese manholes – a colorful place full of fun and unique designs, vivid colors, and surprises! The secret behind the hype is that every city and even some neighborhoods have their very own manhole designs, usually reflecting a characteristic of the area, sometimes a fun homage to Japan’s anime and manga culture.

Is that why a certain Japanese plumber is so keen on jumping into every pipe he can find? Let’s take a closer look at Japan’s manhole obsession. 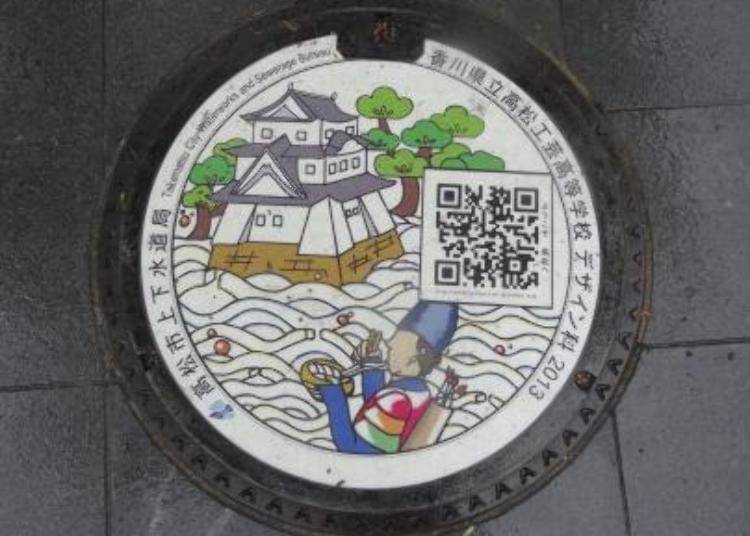 The manhole design of Takamatsu City, depicting Takamatsu Castle, its magnificent pine trees, and Nasu no Yoichi, a famous samurai commander. He eats udon, the local specialty. Scanning the QR code will display information about sightseeing spots and restaurants around the area.

We asked Hideto Yamada of the Sewerage Public Information Platform (GKP) about Japan’s unique manhole designs and their meaning.

“Because it highly depends on the budget of the local government, it’s not a nationwide phenomenon, but I have certainly been surprised by many unique manholes and the design possibilities. We anticipated the designs to a certain extent, but the local municipalities really managed to surpass all expectations. The manholes are just getting better and better.”

Local specialties and sights aren’t the only things appearing on manholes throughout Japan. A lot of cities and neighborhoods have started getting really creative and integrated stamp rallies into the designs, leading people from manhole to manhole, often along recommended sights or shops. Some stores and restaurants even offer discounts or a free glass of beer or a little souvenir if you show them a picture of the local manhole design! Certain designs feature QR codes, as shown in the image above, that display all sorts of sightseeing, shopping, and dining information in the area when scanned. As weird as it may seem, manholes have played a big role in revitalization efforts and bringing more tourists to Japan’s less well-known areas!

“We noticed that there is a movement to create unique manhole designs and advertise them. This encourages people to come visit the area.”

Indeed – if you’ve spotted a fun manhole, you’ll probably want to get a card of it. And, vice versa, go see the real thing if you’ve only admired it on paper thus far. Japan’s social media sites are rather obsessed with creative manholes and their trading cards – especially if you manage to snap a photo of the original and the paper version next to each other. The people who see the photo on their feed become curious and many start to make a pilgrimage to the manhole – and the city it is in – themselves. The data of various prefectures backs up this PR strategy: 60% of people who came to see a city’s manhole design at the sewerage bureaus or city halls are from outside the prefecture. 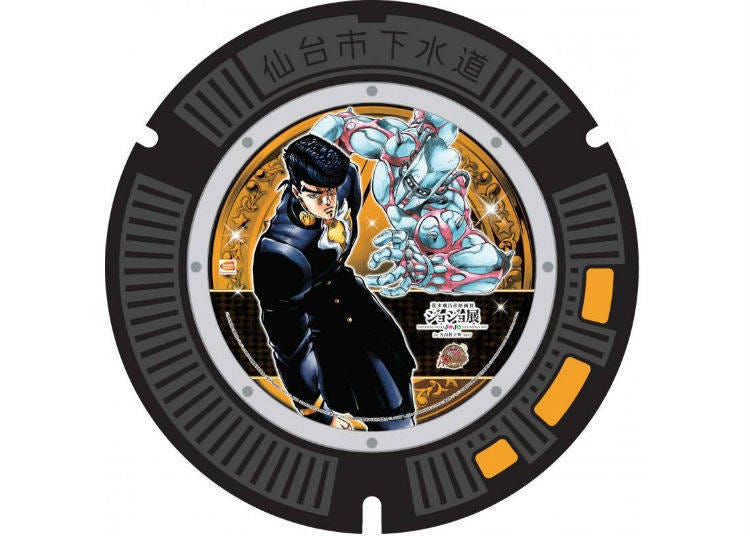 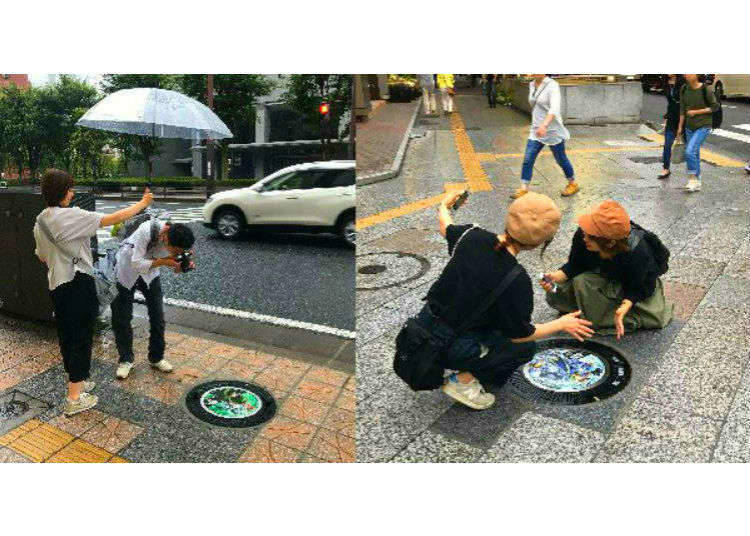 For a limited time, Sendai City in Miyagi Prefecture had manholes with designs of the iconic anime “JoJo’s Bizarre Adventure.” Needless to say, numerous fans visited the city to take a look at the different designs.

“In the beginning, we thought that besides collectors and die-hard fans, the manhole cards wouldn’t be particularly popular. Never did we imagine that a million cards would be sold! Initially, we hoped for it to evolve little by little and become somewhat of a fun, local standard, but no one thought that manholes would be this popular.”

“Local creations” is a main PR focus throughout Japan right now and the number of international tourists rises with every year – two factors that helped to kickstart the manhole mania. Understanding that creative manholes boost tourism, municipalities all around Japan have started financing designs not only with the sewerage budget but also with the help of their tourism budget.

“Previously, cities have advertised their manhole designs on their own, but now there’s this nationwide project of manhole trading cards that targets collectors. That this created such a boom will further encourage the local governments to make their designs even more interesting and think of new ideas for campaigns and so on, I believe.”

Reason No. 2 – Japan’s Commitment to Unite Technology and Beauty 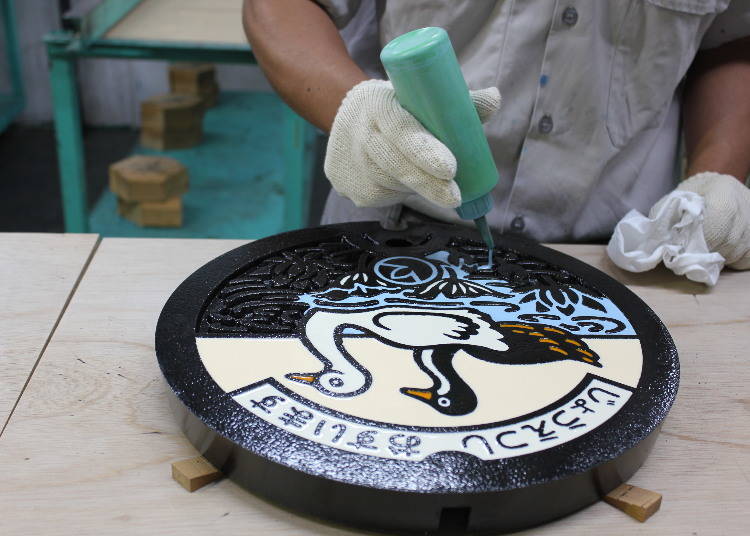 The designs are carefully colored by hand, one manhole after another.

Japan is known for its attention to detail, a characteristic also applied to the country’s manholes. Initially, the manholes were made to be as smooth as possible and to for the road as best as possible. Slowly, little, decorative accents started to appear on around sightseeing landmarks and shopping districts, until the first sewer cover with an original design made its debut in 1978. Just a few years later, in 1981, the first manhole with colors graced a Japanese road and by 2000, numerous designs could already be found all over the country – 12,000 in total. Whenever a city decides to make a custom manhole, the design is made entirely from scratch. Then, a mold is made and every single manhole is colored by hand. We asked Shunsuke Nagashima who works at a company called Nagashima Foundry Co., Ltd. about the making of a manhole:

“It takes months before the design is decided. Which lines should be thick, which should be thinner, and shouldn’t these waves look different. What color to use for this part here, what color does a particular mascot have, and so on. Sometimes I get feedback about things that I wouldn’t have thought of. It’s fairly tough, actually, but I enjoy working with a municipality that is passionate about creating a great design.” 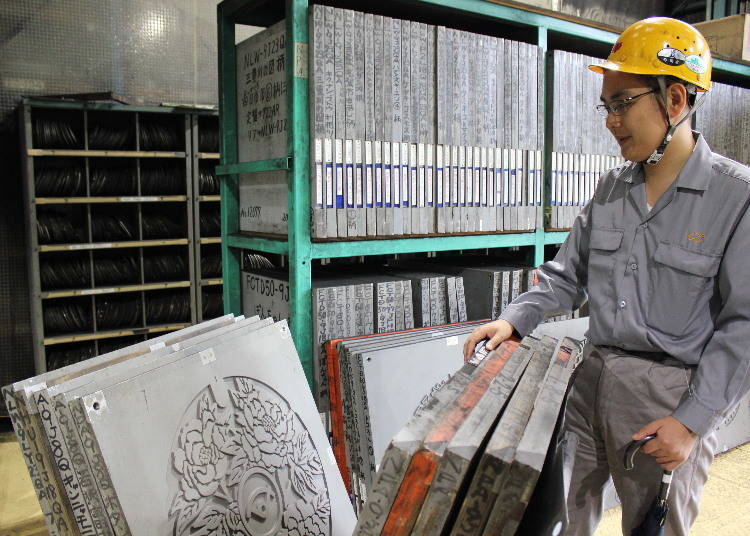 A manhole is a manhole, though, and the real challenge is to make a design as beautiful as possible while also maintaining the original purpose of the manhole – it cannot be too slippery and needs to fit the road, after all. Both Mr. Nagashima and Mr. Yamada agree: the designs are fascinating, but the most important thing is a manhole’s safety. Especially the surface of colored manholes becomes rather flat, making it slippery. 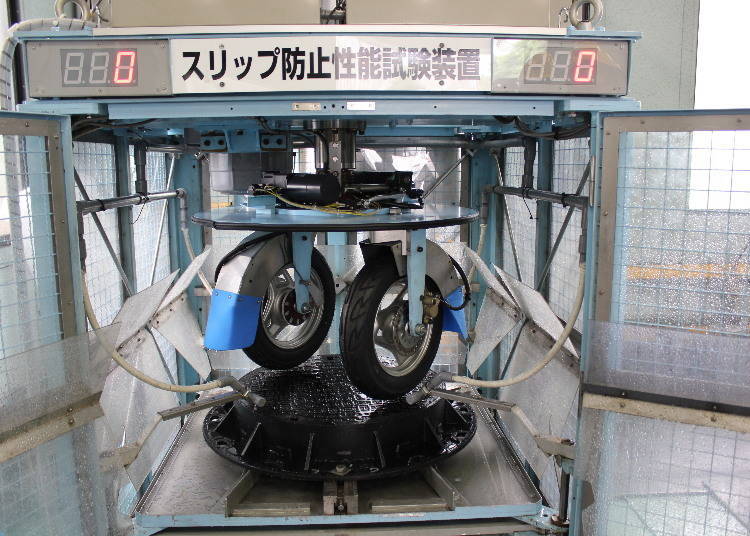 This machine tests how slippery a manhole becomes when it rains.

A manhole that is too slippery can quickly result in an accident. Pedestrians could slip and fall, and the brakes of bicycles may not work – sometimes, certain elements are added to a manhole that were not included in the original design, for the sole purpose of making them safer. 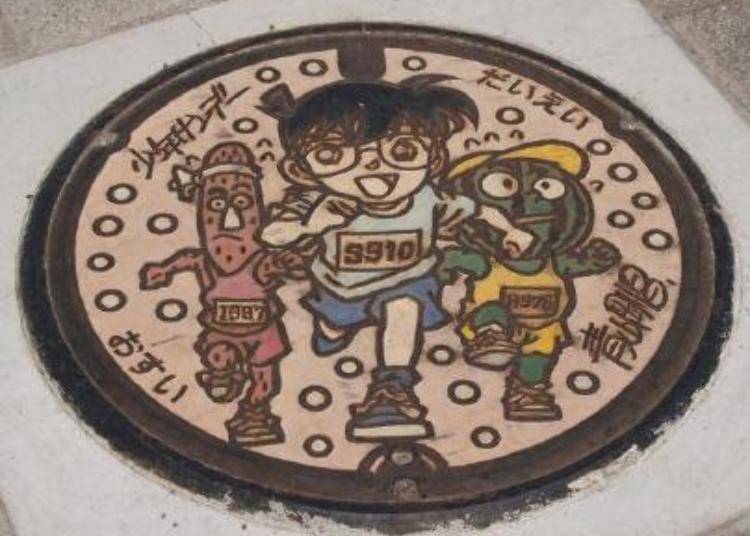 The extremely popular “Detective Conan” manhole. It can be found in the original author’s hometown, where the main protagonist races with a yam and a watermelon character, both local specialties.

“The dots that you see in the background of this Detective Conan design weren’t part of the original draft but were added for safety.”

A manhole that is both creative and fun to look at while maintaining the highest standards of safety – that is the ultimate goal of every modern Japanese manhole. The trend has spread to fire hydrants as well, making use of cutting-edge technology. 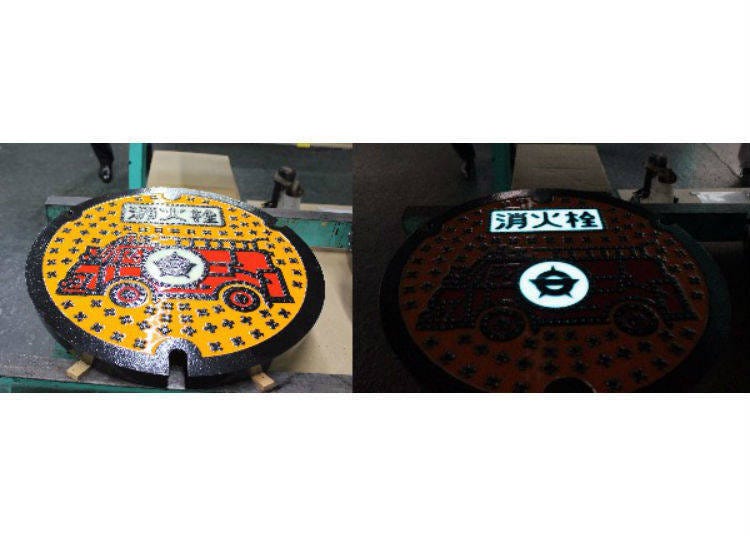 Even on cloudy days, the white markers will shine from sunset to dawn, making it easy to spot at any time – a crucial factor in emergency situations.

“Because of the excellent performance and safety of phosphorescent paint, dese kinds of design have become possible. Even at night, firefighters are able to find hydrants quickly even at night.”

Who would’ve thought that something as mundane as manholes can improve our lives with the newest technology? It almost makes one wonder what kind of futuristic sewerage covers the future holds... in any case, Japan generally is excited about new technology, so it seems like the manhole mania is here to stay.

Reason No. 3 – Manholes are Local Art That Conveys Local Culture 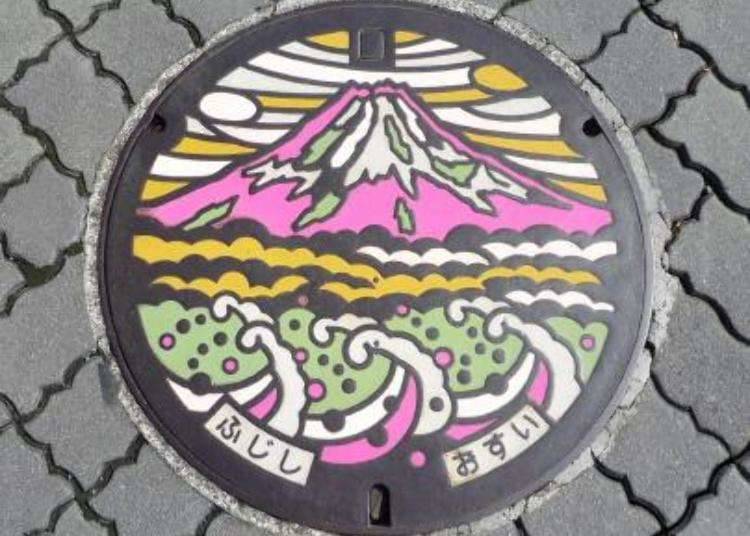 “I do believe that the production, technology, and design of manholes is a part of Japanese culture, yes” says Mr. Yamada. “Japan is a small country but still has about 1,700 cities, many with original manhole designs. On a 60cm-big diameter, cultural assets such as Mount Fuji and Osaka Castle are shown, or local landmarks and specialties. Something that represents the area. A lot of countries would be wealthy enough to do something similar, but honestly, it’s quite a hassle. Doing it despite this hassle, that is rather Japanese, I think. Subtlety and politeness are characteristics of Japan, closely connected to what you could call a national spirit.

The first design manhole is almost 40 years old now. This topic has history and therefore it’s interesting. Even a lot of people weren’t aware of these design manholes before the appearance of the trading cards, but now I’d like to see Japan’s unique manholes become a steadfast characteristic instead of just a trend. Just in October, a new set of manhole trading cards was released, depicting 50 new cities.”

It seems like there are numerous cities who want cards for their own manholes – so many, the waiting list seems to be three years long! However, the cards aren’t made in large amounts as to not bring an all too sudden end to Japan’s manhole mania. The demand is certainly there, especially for limited cards, but the Sewerage Public Information Platform has a rigorous policy: manholes will not be graded as better or worse (or rare and common, speaking in trading card terms).

Originally, the manhole trading cars were mainly a publicity tool to improve the image of Japan’s sewerage. The excitement and passion about collecting and seeing the manholes that have taken the nation by storm was a positive side effect, entirely unexpected. While you don’t have to go as far as to travel to a city only for its manhole, do pay attention to your feet the next time you’re in Japan – you’ll never know what kind of unique creation you will come across!

■ The Japan Manhole Club (Japanese only)