HOME More that 26 typhoons every year! Basic knowledge of Japanese typhoons before traveling 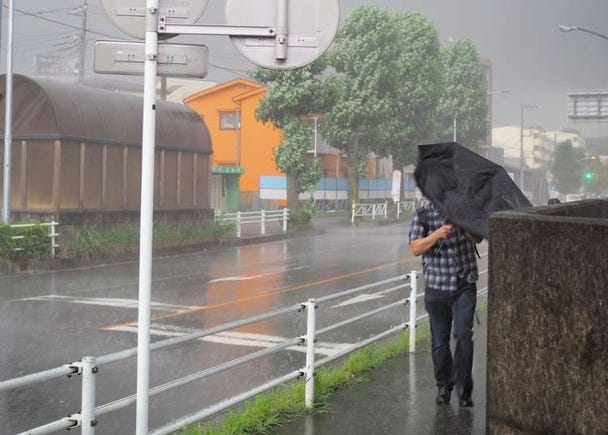 More that 26 typhoons every year! Basic knowledge of Japanese typhoons before traveling

In Japan, typhoons approach and make landfall from summer to autumn. They have a great deal of energy and can cause extensive damage.

・ A brief explanation
Tropical cyclones are a type of storm characterized by heavy rains and strong winds. “Typhoons” are cyclones that form in the Northwest Pacific Ocean or the South China Sea and have maximum wind speeds of about 17 meters per second (average of 10 minutes). International conventions define a typhoon as having maximum wind speed of 33 meters per second or more (average of 1 minute). Depending on where they occur around the world, tropical cyclones have different names. South of the equator they are simply referred to as “cyclones,” while those occurring in the Pacific and Atlantic oceans (east of 180 degrees longitude, and north of the equator) are called “hurricanes.”

・ Where typhoons are likely to occur
Seawater temperatures have the greatest impact on the occurrence of typhoons. Air containing plenty of water vapor rises from the warm surface and forming cumulonimbus clouds. The heat generated in the process warms the surrounding air, ascending airflow is generated, the cumulonimbus cloud grows, and a tropical cyclone has formed.

Tropical cyclones form easily throughout the year in warm areas, and according to JMA (Japan Meteorological Agency) data, an average of 26.4 typhoons generated annually from 1951 to 2009. Of those, an average of 11.5 typhoons approach Japan, and 2.9 make landfall annually. 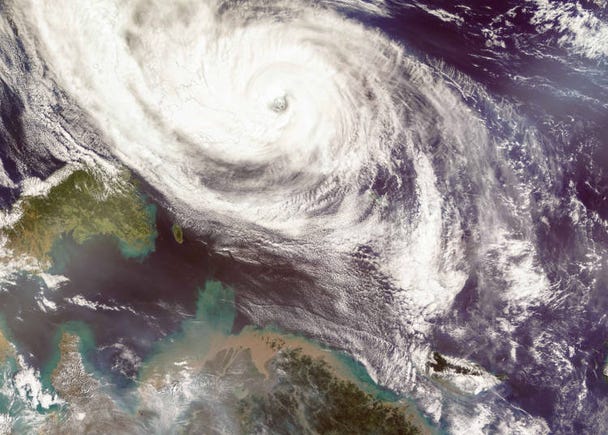 ・ In Japan, typhoon season lasts from July to October
Since temperature is a major factor in the formation of typhoons, the highest number of typhoons occur from July to October, when temperatures in the northern hemisphere are highest. In early spring, typhoons occur at a lower latitude and travels west toward the Philippines. In summer, the latitude at which typhoons generate increases, and the number of those heading for Japan increases.

・ Typhoon course
Typhoons don’t move on their own, but are rather blown by the winds around them. Therefore, their courses change depending on the atmospheric pressure around the Japanese archipelago.

The strongest influence on the course of typhoons approaching Japan is the development of the North Pacific High. Typhoons move around the western edge of the High. For this reason, typhoons in June, when the High not well developed, they more influenced by westerly winds, and pass along the Philippines without nearing Japan.

In July and August, the North Pacific High covers much of Japan, so typhoons may take routes along the edge of the High and pass close to Kyushu and Okinawa.

2. Effects of a typhoon 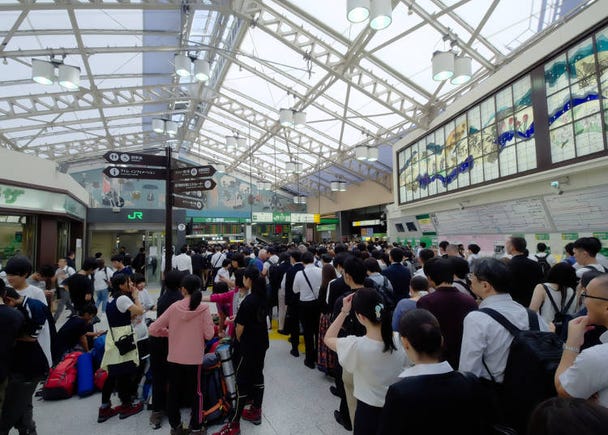 ・ Natural impact
Typhoons have a great deal of energy and can cause heavy rains, storms, high waves, floods, and landslides. Even in urban areas, damage may be caused by flying or falling objects.

・ Impact on social life
Typhoon No. 21, which caused great damage to western Japan in 2018, reached a maximum wind speed 4 meters per second. Here are some of the effects it had on social life:

a. Delayed or cancelled flights
In only two days, Japan’s two major airlines had 659 domestic and international flights affected, causing problems for more than 64,000 passengers.

b. Isolation due to transport incidents
About 3,000 people were stranded at Kansai International Airport and had to spend the night inside the airport because a fuel tanker, pushed by strong wind and currents, collided with the bridge connecting the airport to the mainland. Additionally, the airport had to be closed for five days because the runways were flooded.

e. Closed sightseeing spots
At Universal Studios Japan (USJ), heavy rains and wind made it impossible to operate the attractions and forced the theme park to close for two days.

3. What to watch out for and what to do during a typhoon 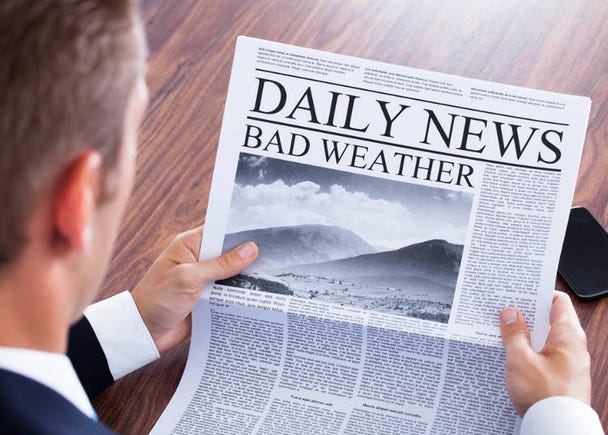 ・ Where should I get information if a typhoon occurs?
An issue of concern for foreigners visiting Japan is the worry that when a disaster strikes, they cannot get enough information about the situation.

Here are some sources of typhoon information that offer multilingual support:

・ What to be careful of during a typhoon
Typhoons often cause heavy rains and storms. Therefore, there is the possibility of being injured by flying or falling objects, or being stranded due to flooded of rivers, roads, or buildings. To avoid trouble, refrain from going out unnecessarily.

In addition, trains are likely to be delayed or stopped due to storms, making it impossible to return to accommodations. Therefore, be aware of traffic information if a typhoon is approaching.

LIVE JAPAN has a web page listing information sources in case of emergencies and disasters. You can also check official information of each transportation service in “Traffic Information.”

Fun things to do during typhoon season in Japan 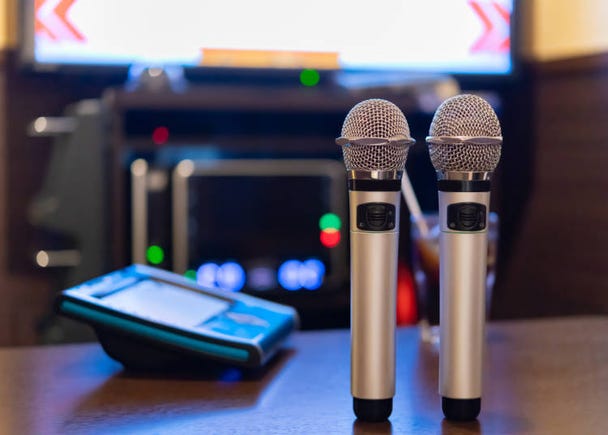 ・ Fun during a typhoon
It’s possible that you will encounter a typhoon on your holiday, but there are still ways and places to have fun:
・Hotel SPA and Jacuzzi
・Hot springs
・Karaoke
・Indoor amusement parks
・Shopping mall
・Cinemas and theaters

Generally, these places won’t be affected by the weather outside, so you can still have “ty-fun.” Maybe the typhoon will even pass while you’re indoors and you can enjoy clear weather on your way home. However, if you go out, check the weather information carefully. 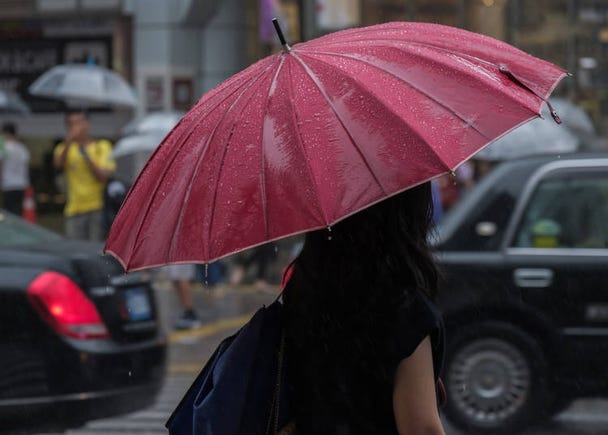 Summer typhoons are more likely to occur due to high seawater temperatures. Because other typhoons are occurring simultaneously and they’re affected by westerly winds, summer typhoons have slower wind speeds, and may experience sudden changes in direction. They may travel north, and then suddenly turn south.

Autumn typhoons are faster and bring more rain than summer typhoons. In autumn, westerly winds move southward over Japan, and typhoon speeds increase accordingly. In summer, the temperature of the seawater does not decrease easily, so typhoons may increase in size. In autumn, approaching typhoons affect storm fronts, and increases the possibility of heavy rain. 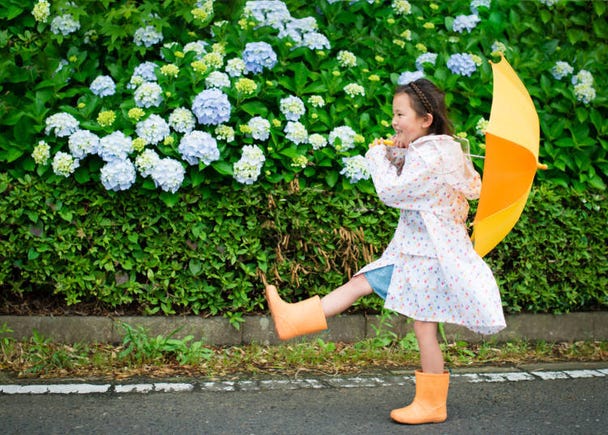 Japan has the most typhoon approaches and landings from summer to autumn. In particular, the autumn typhoons are fast and can be accompanied by heavy rain, so be careful. Due to recent climate changes, ocean temperatures have risen, resulting in larger typhoons, with the potential for greater damage. Before visiting Japan, be sure to check weather forecasts and take appropriate disaster prevention and evacuation actions when necessary.