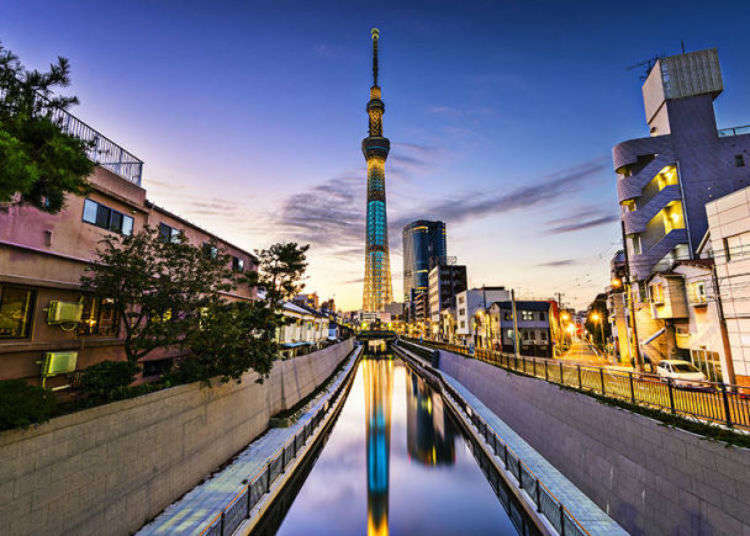 Tokyo Tower has been a beloved symbol of the city for 60 years and counting. In 2012, the newly constructed Tokyo Skytree joined the older tower as a colorful landmark, instantly recognizable and iconic.

Pretty much everyone who visits Tokyo will end up going to at least one of the two towers. To make your visit memorable and something really special, we’re going to show you the very best photo spots at both Tokyo Tower and Tokyo Skytree. Go snap that perfect shot! 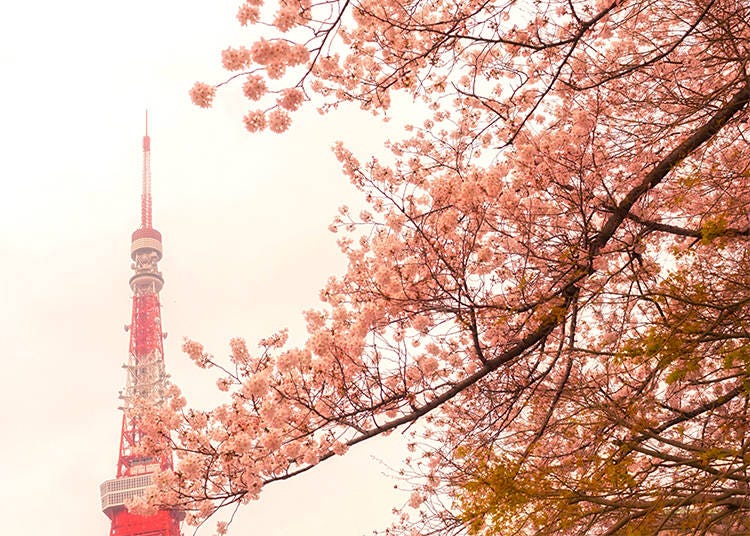 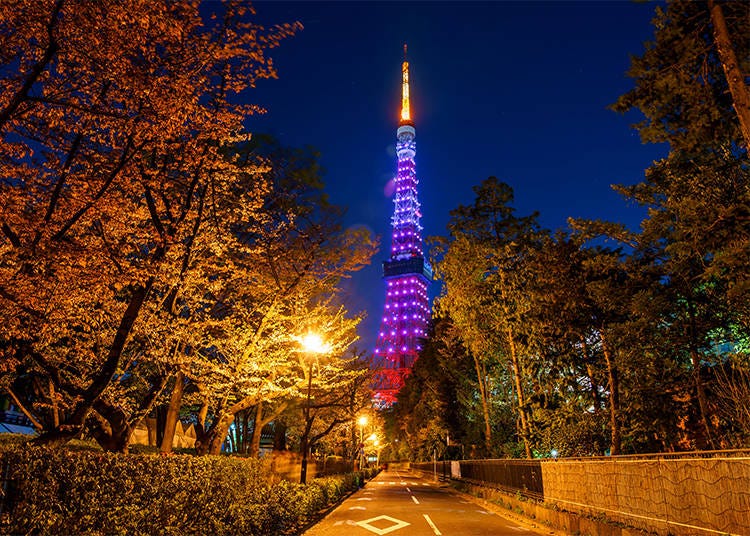 While many office buildings crowd the area around the tower, Shiba Park is said to be one of Tokyo’s oldest nature spots. It goes without saying that it provides the perfect scenery to frame Tokyo Tower, from beautiful cherry blossoms to lush greenery and autumn leaves. 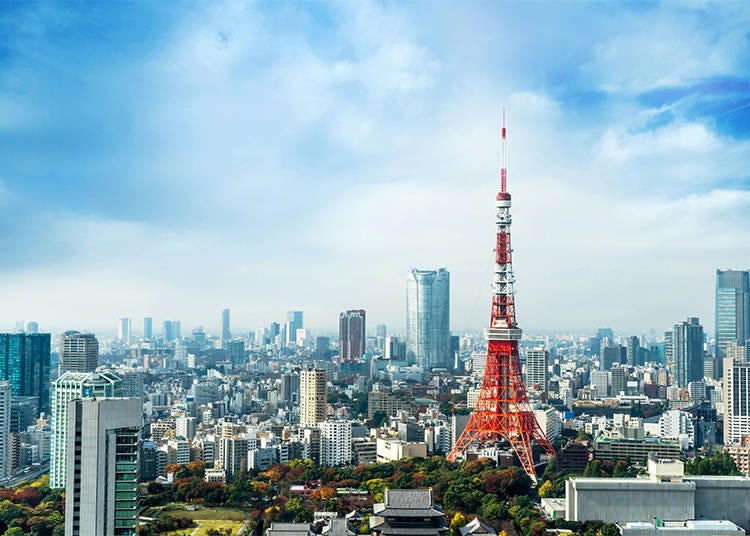 If you’d like a picture of Tokyo’s skyline with Tokyo Tower, we highly recommend going to the nearby Tokyo World Trade Center. There’s an observation platform on the 40th floor that lets you overlook the entire area, including Odaiba.

From this perspective, Tokyo Tower rises colorfully amidst a cityscape of dots of greenery and plenty of high-rise buildings, making for an impactful picture. The Tokyo World Trade Center is directly connected to JR’s Hamamatsuchō Station and Toei’s Daimon Station. 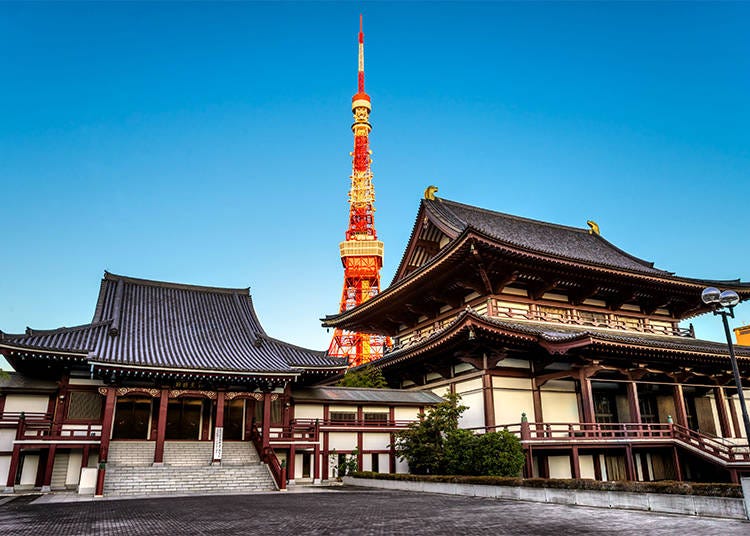 Zōjō-ji is an old, prestigious temple where six generations of Tokugawa shoguns are enshrined. Rumor has it that when Tokyo Tower was built, the building materials were kept on the temple premises. For a stunning harmony between traditional and modern, head to Zōjō-ji and take a picture with Tokyo Tower rising above the ancient structure. 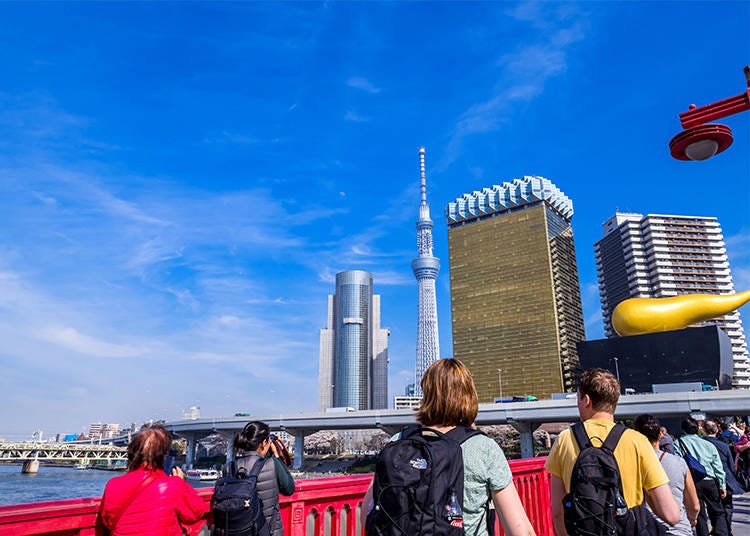 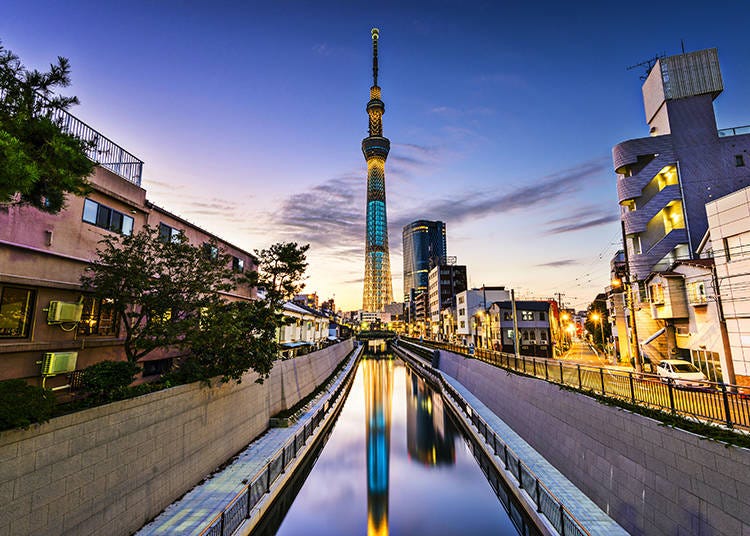 Let’s head over to Tokyo Skytree next. It’s located in Oshiage, an area that is about a 15-minute walk away from the famous Asakusa and its Sensō-ji temple. Our warmest recommendation is to actually go for a walk instead of taking the subway or bus, as the route takes you across the Sumida River.

You’ll also pass by Asahi Beer's headquarters and its famous golden flame, designed by French designer Philippe Starck. The best place to capture the golden icon with Tokyo Skytree in the background is the scenic Azumabashi bridge, just outside Toei Asakusa Station. 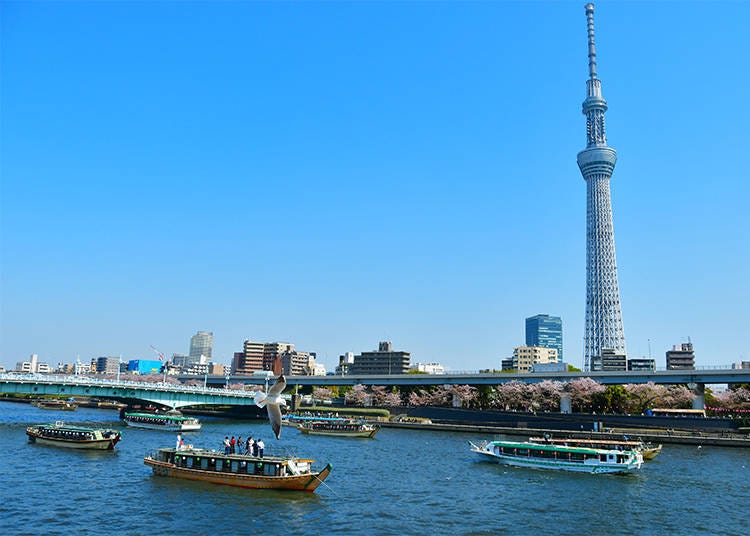 For a more aquatic shot, you might want to think about hopping on a boat! Several cruises take you up and down the Sumida River, offering sceneries of both modern and traditional boats with the stunning Tokyo Skytree towering in the background.

In spring, a river cruise like this is also a fantastic way to experience Japan’s cherry blossoms. Most cruise routes even take you all the way down to Tokyo Tower, serving both iconic towers in one go! 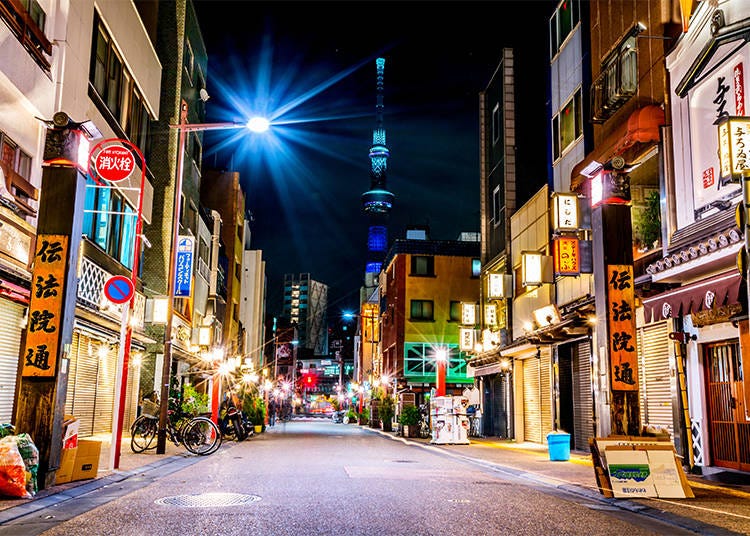 A colorful scenery awaits at Kappabashi Street, an area that also goes by the nickname of “Kitchen Street.” Many people head to Kappabashi to try their hands at making Japan’s famous food samples, but few know that the neighborhood boasts a unique view of Tokyo Skytree.

It peeks out from narrow alleys filled with small shops and stores, providing an elegant backdrop to a scene of Tokyo’s day to day life. This certainly is one of the more uncommon photo spots for Tokyo Skytree but one of the most charming ones.

Tokyo Tower vs. Tokyo Skytree: Spice Up Your Sightseeing Adventure with Fun Trivia!
Buy Online: Tokyo Tower Observatory Admission Ticket
Buy online: TOKYO SKYTREE® Admission Ticket
*This information is from the time of this article's publication.
*Prices and options mentioned are subject to change.
*Unless stated otherwise, all prices include tax.