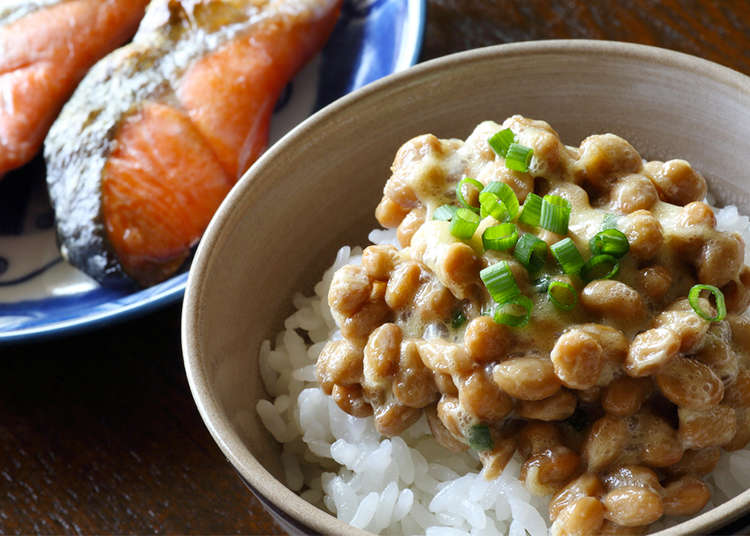 Japanese natto beans have garnered a bit more of the spotlight in recent years for their superfood and probiotic appeal. Made of soybeans fermented with a special variety of the Bacillus subtilis bacteria, natto is one of the healthiest soy products you can find.

Natto is a polarizing food as well, thanks to its unique smell and sticky, gooey texture. “Do you actually eat this?!” is a common reaction of people who are first presented with a bowl of nattō.

Don’t dismiss the smelly beans so quickly, though! This traditional Japanese superfood has high nutritional value, said to protect against strokes and cardiac infarcts, and is known for helping with both diets and stress relief. It goes great with rice and is incredibly cheap, two reasons why so many Japanese are utterly in love with nattō.

But where does it come from, and how to eat natto? Join us on a smelly, sticky adventure to discover all about Japan’s most mysterious soul food!

What is Natto? A brief history 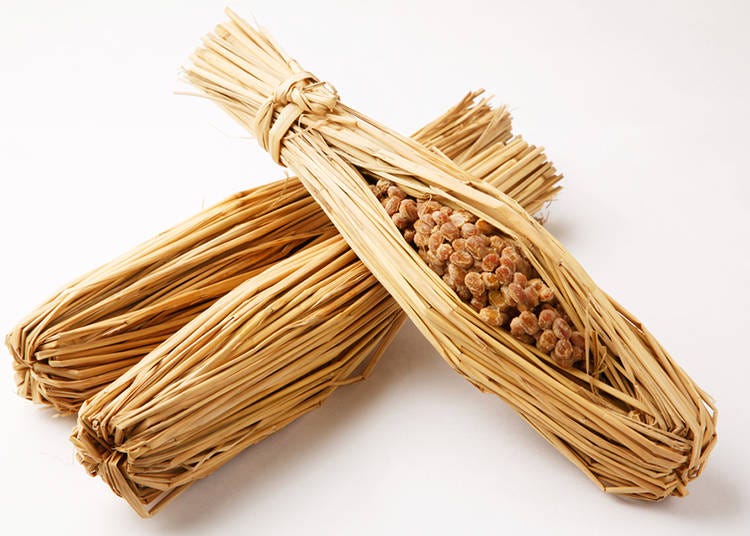 There are various theories as to how and where Nattō first saw light. The general idea usually is about cooked soybeans wrapped in straw fermenting naturally. People gave it a try, enjoyed it, and ended up fermenting beans on purpose.

One such story is linked to Mito City in Ibaraki Prefecture. In 1083, the military commander Minamoto no Yoshiie and his army stayed in the northeastern part of the prefecture. They boiled soybeans as fodder for their horses, wrapping the leftovers in straw for easy keeping and transportation.

However, the next time they opened these straw containers, they found that the beans had fermented and now were all sticky and stringy. The soldiers got curious and gave the beans a try – and enjoyed them! When they gave them to their general, Minamoto no Yoshiie was equally delighted! It is said that the word nattō (納豆) comes from the Japanese phrase of “beans for the general” (将軍 に 納めた 豆). 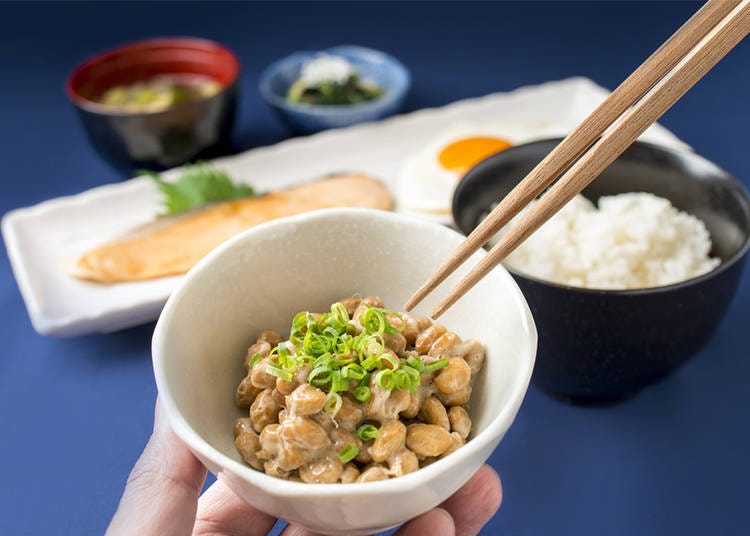 How much natto Japanese eat per day depends, but every morning, millions of people in Japan eat a bowl of rice topped with nattō for breakfast – it’s a staple.

The fermented beans can easily be bought at every convenience store and supermarket in the country. In Japan, the price of natto tends to be around 100 yen for 3 to 4 packs. 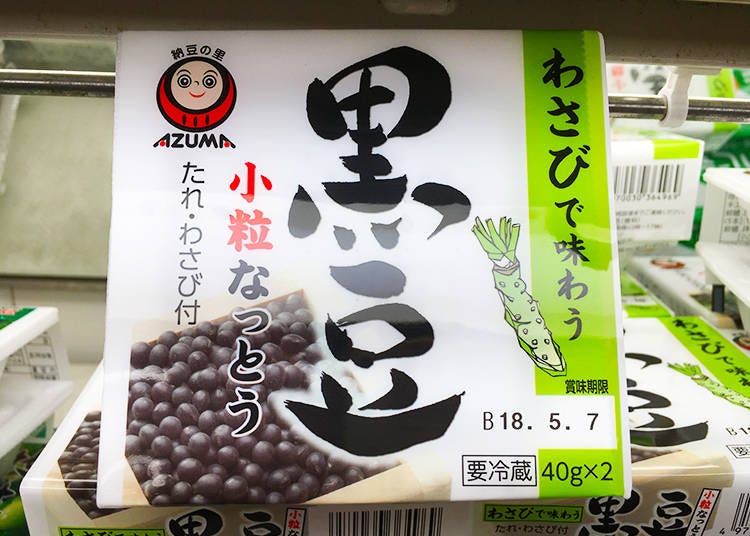 The traditionally most popular varieties are kotsubu nattō, “small beans” often used for sushi, as well as hikiwari nattō, which features ground soybeans.

Nattō really comes in various shapes and forms, such as kuromame nattō black soybeans with a relatively mild taste and rich in anthocyanin, a type of flavonoid that boasts antioxidant properties.

Usually, they all come with sauce and karashi, Japanese mustard. Plain white rice topped with nattō makes for a delicious meal on its own and is a great, viable option when you’ve got no other ingredients at hand. 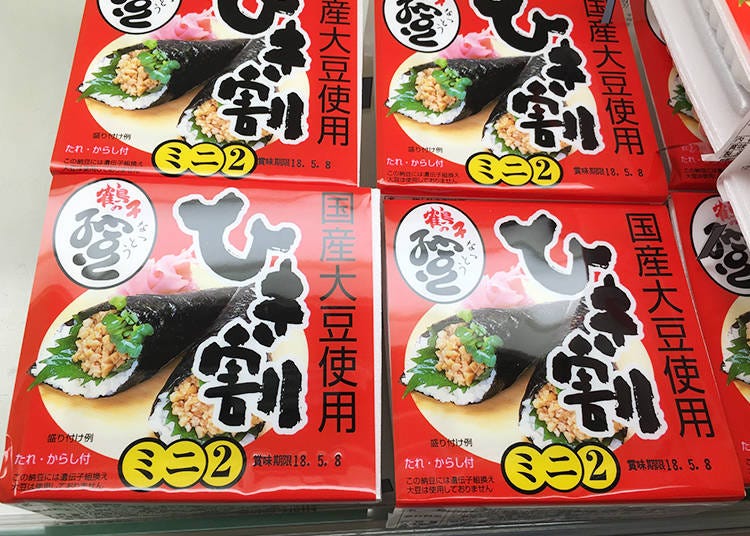 How much natto do Japanese eat? 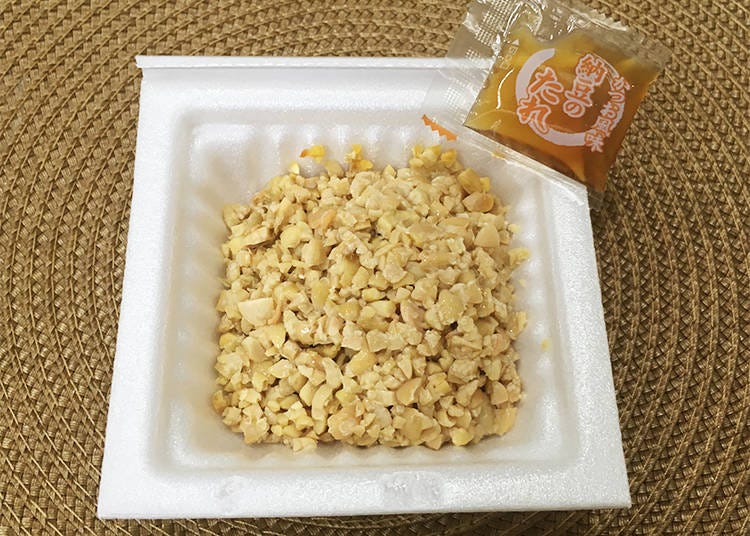 According to the statistics released by the Ministry of Internal Affairs and Communications in 2016, the average Japanese person eats 41 packs of nattō every year. If you look at individual prefectures, you’ll find that people in Tohoku’s Aomori Prefecture are the biggest nattō lovers, with one person enjoying 68 packs annually. That’s about 1.5 nattō packs per week.

Close contenders are Miyagi, Niigata, Gunma, and Ibaraki Prefecture. Tohoku (Northeast Japan) and Niigata seem to have such a high consumption because of their abundance of rice fields, while Ibaraki Prefecture is so high on the list due to its rumored status as the birthplace of nattō.

The opposite trend can be seen in Okinawa and Wakayama Prefecture, where the average person only eats 22 packs per year. That’s only one third of Aomori’s consumption, but still is an average of once every two weeks.

There are local trends. The prefectures with the lowest nattō consumption are all concentrated in the Chugoku and Shikoku region, as well as in Kansai. In these parts of Japan, dishes such as wheat flour udon (thick noodles) or okonomiyaki are particularly popular, so white rice is eaten a lot less than in the nattō-loving Tohoku region. It can be said that the local food culture has a relatively big impact on people’s nattō habits. 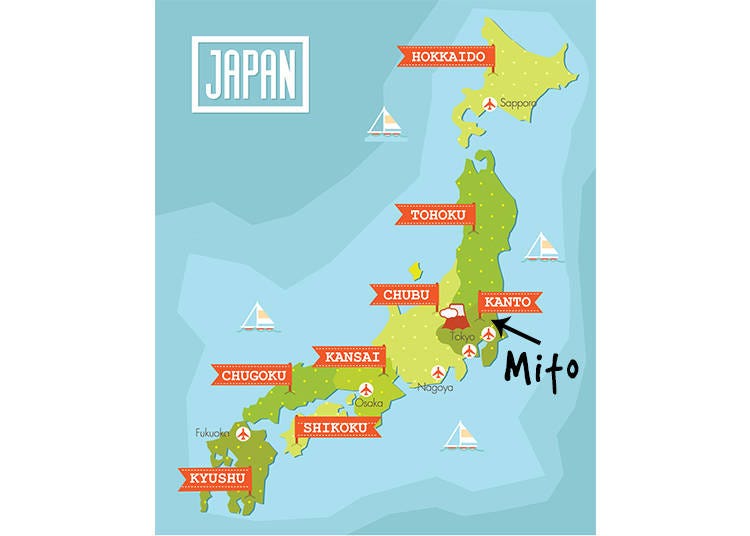 If we now zoom in on cities, the clear winner is Ibaraki Prefecture’s Mito City, the alleged birthplace of nattō.

Why is Nattō So Gooey and Sticky? 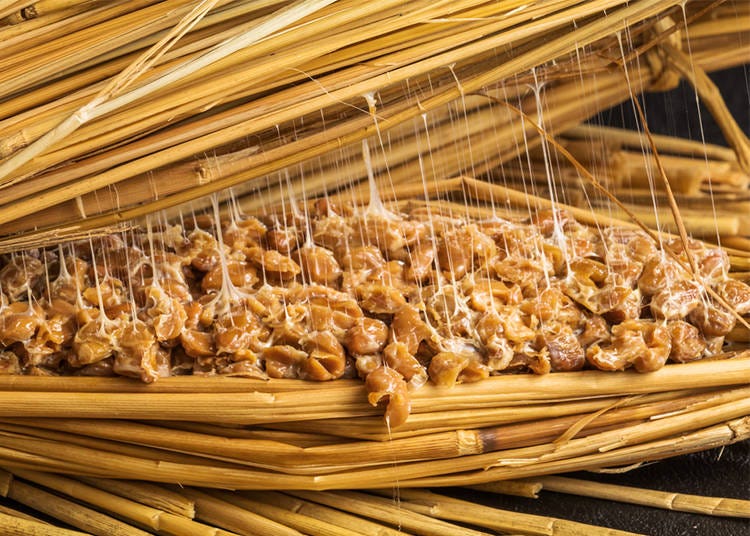 Nattō is fermented by adding a culture of Bacillus subtilis var. natto to steamed soybeans. The iconic stickiness and gooeyness of the dish is the result of the nattō bacteria breaking down proteins into components such as glutamic acid. This glutamic acid forms long, folded chains, which is exactly why nattō is so unbelievably stringy. This acid can also be found in kelp and the secret to nattō’s taste – it’s a major umami component.

How to Eat Natto

Enough with the theories, let’s take a look at how to enjoy nattō properly! 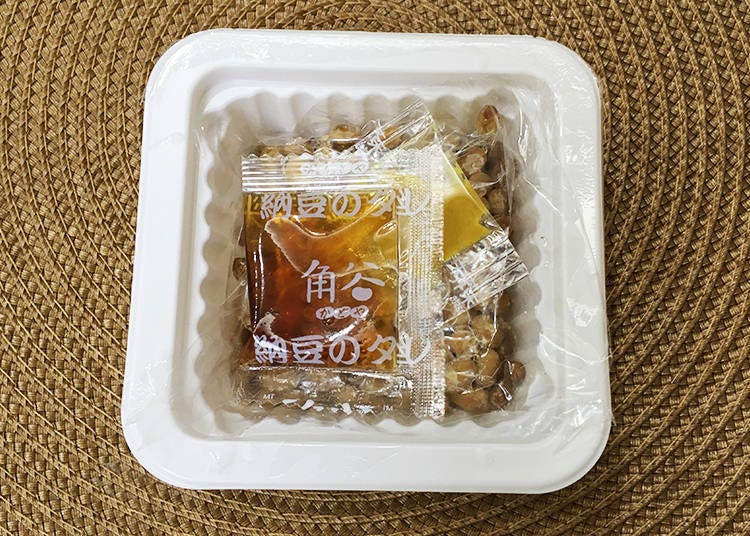 1. Open the package and take out the sauce and Japanese mustard. 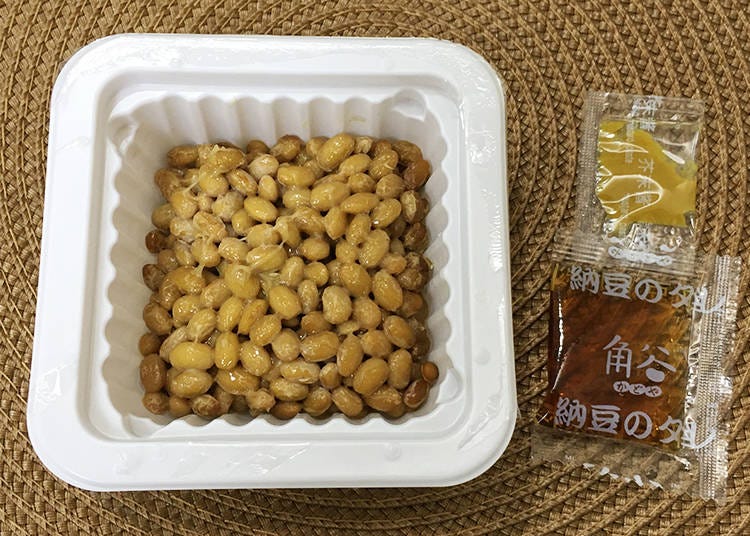 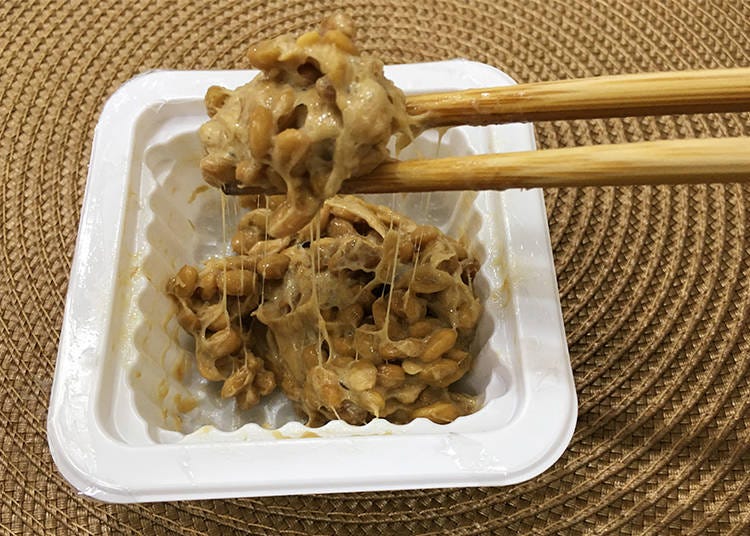 Nattō Note: the more you mix, the stickier and stringier it gets. The flavor also gets stronger.

Nattō Note: If you need more flavor, feel free to add extra soy sauce according to your own taste. 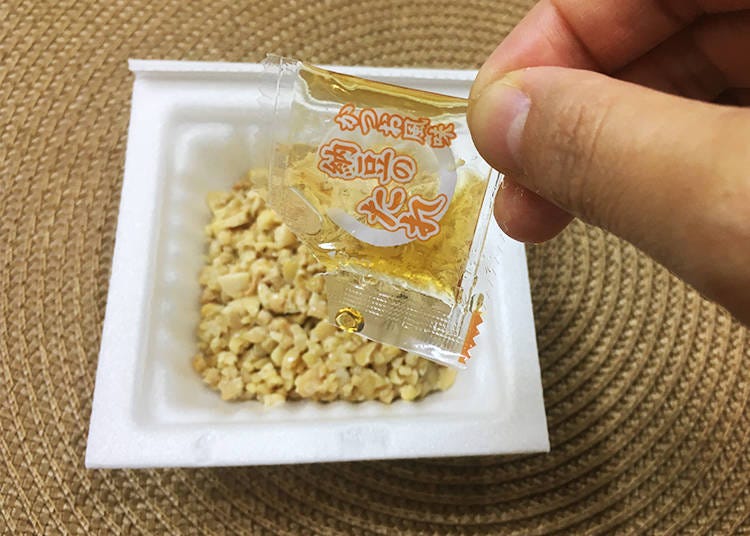 Nattō Note: Adding just a bit of mustard will make the beans richer and deeper in taste. 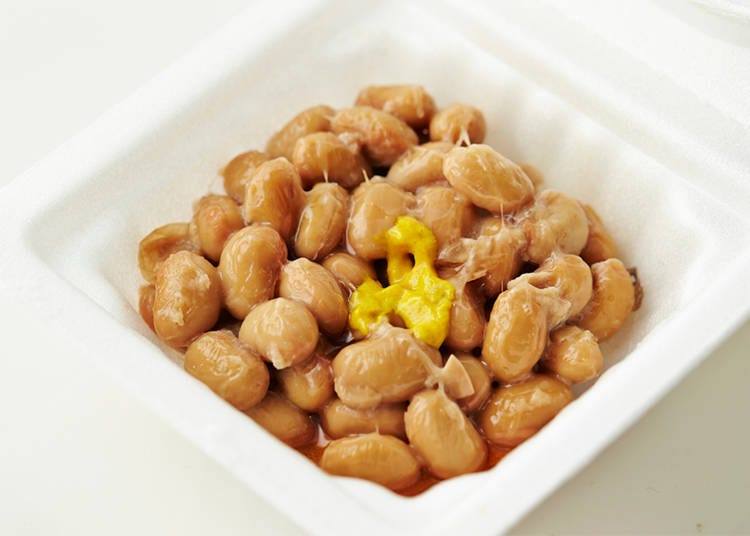 6. Top a bowl of rice with it and enjoy nattō like the Japanese! 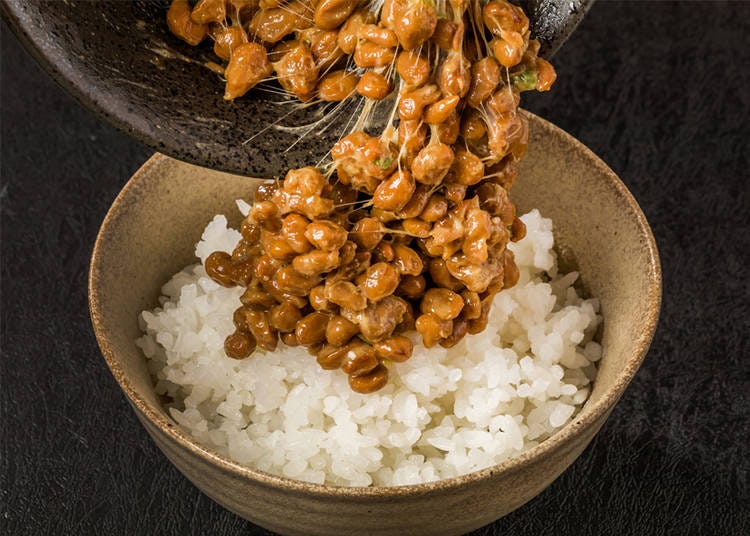 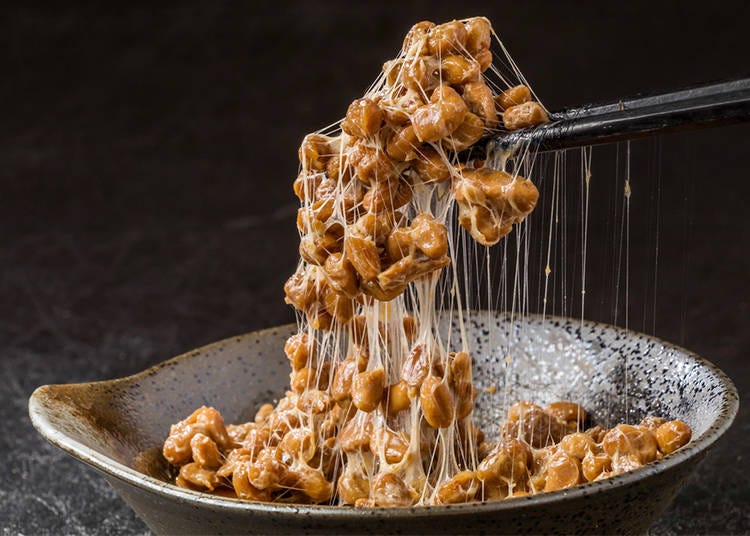 Nattō boasts its very own enzyme called nattokinase. It is known for its positive influence on the circulatory system, countering high blood pressure as well as lowering the risk of a heart attack or cerebral stroke.

In general, the Japanese superfood has a high nutritional value, promising benefits for both health and beauty. So what exactly are those nutrients? 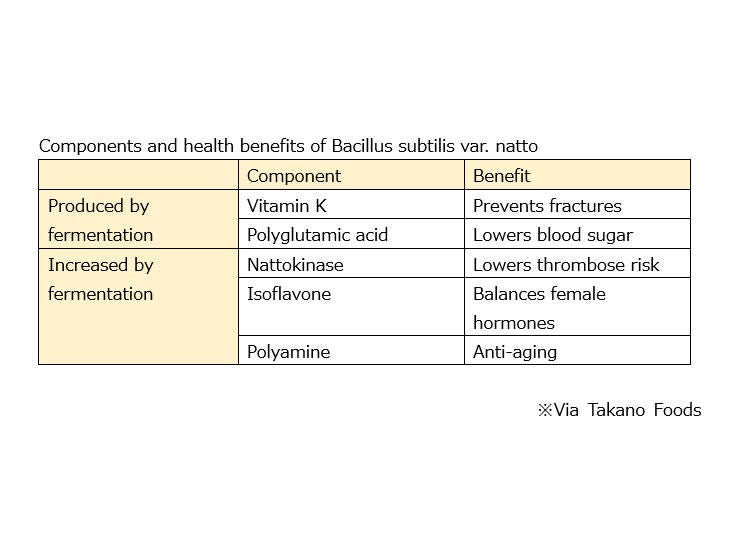 Where to buy natto? It’s So Cheap!

Nattō fits into every budget easily! It’s sold at all supermarkets and convenience stores in Japan for the little price of about 100 yen for 3 to 4 entire packs.

Since it goes so well with rice, that is a lot of nutritional value in a cheap meal. Various toppings can be added to spice it up in all sorts of different ways! That also makes nattō a great side dish. Whenever your pantry or your wallet is empty, nattō is your best friend. 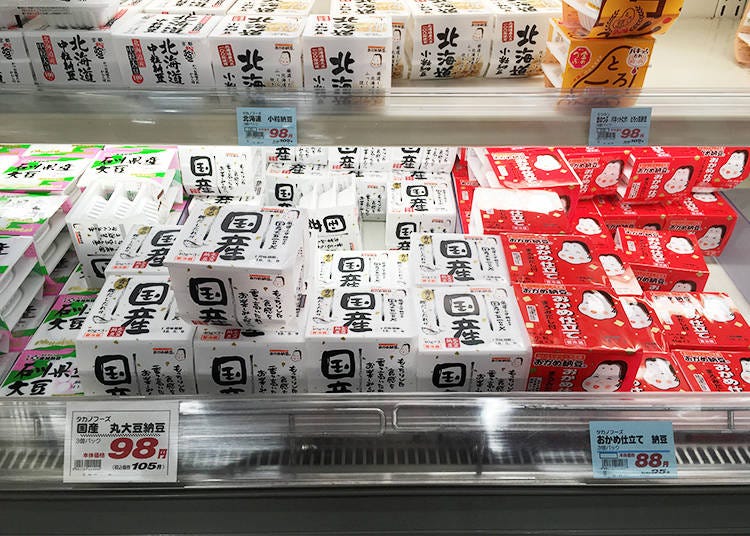 You don’t always have to eat nattō by itself or with just plain white rice. Many other ingredients go well with the fermented beans, so there’s plenty of flavor combinations to discover. In theory, you could eat nattō every single day with a different topping and it’d never taste the same! Which one’s your favorite? 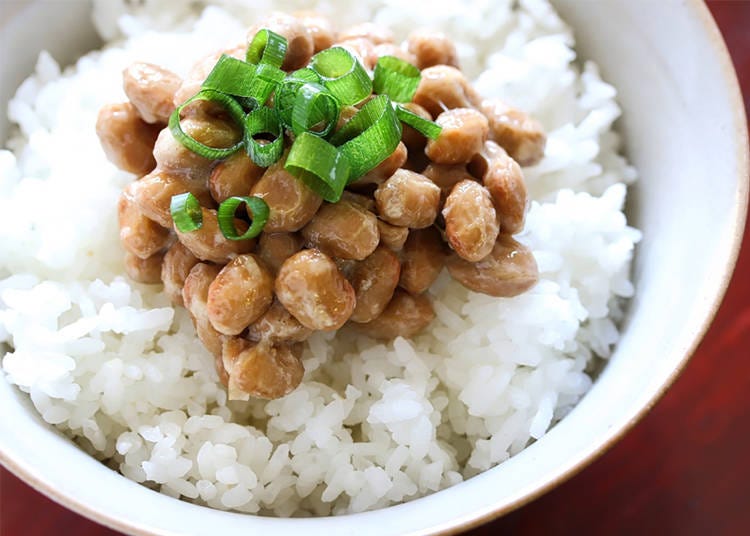 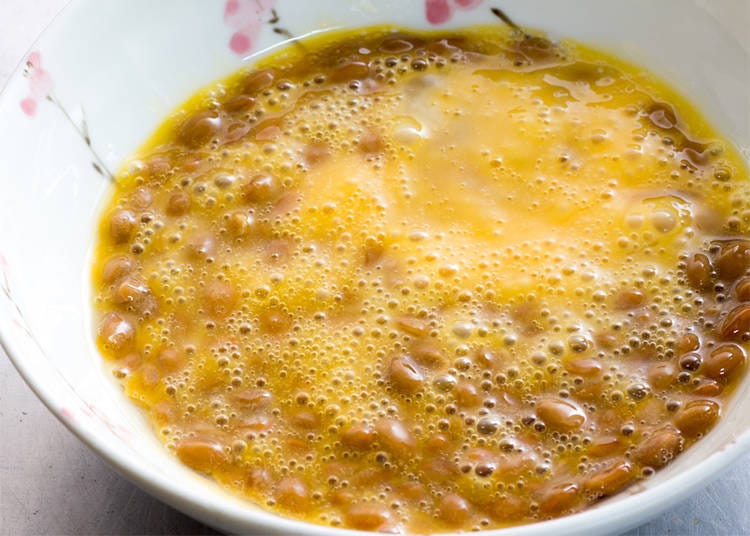 This natto recipe might seem weird but nattō and raw egg is a great combination. Put the raw egg on a bowl of rice, add soy sauce and a pack of nattō and you’re good to go! 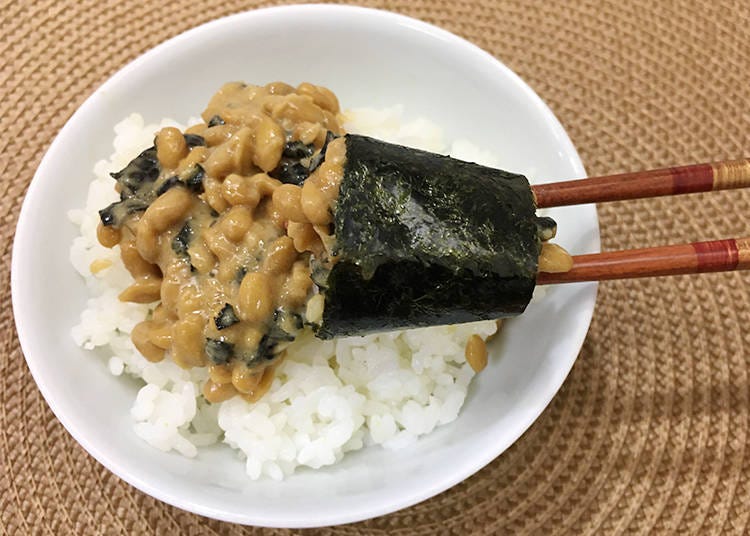 Dried seaweed will keep the stickiness in check and makes it easier to eat! 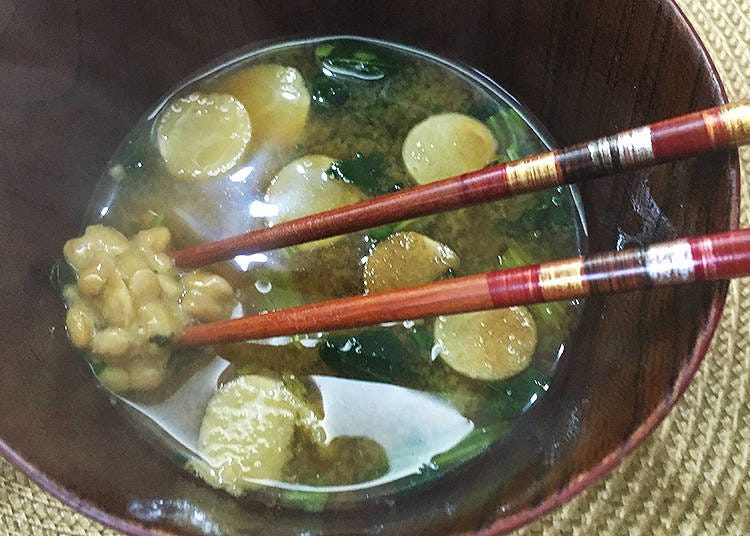 And in a simple natto recipe, add leftover beans to an instant miso soup!

There really is no limit when it comes to nattō toppings. Other great examples are kimchi, okra, ginger, bonito, squid, mayonnaise, ume (Japanese apricot), or perilla leaf. Some people even eat nattō with sugar! Be adventurous and try various combinations!

You’ll find various different kinds of nattō in a Japanese supermarket. The size of the beans, the sauces – one brand will offer multiple different varieties.

Recently, nattō with a milder smell or nattō with less (or more!) stickiness have debuted on the market, answering to people’s unique preferences. Also keep an eye out for local varieties, only available in a certain supermarket, city, or area!

The “crushed” size is exactly that, fermented beans that have been crushed coarsely. It works well in sushi. Ultra-small and small are often enjoyed with rice as they’re easy to mix and have a chewy texture. Large beans boast a particularly strong smell. 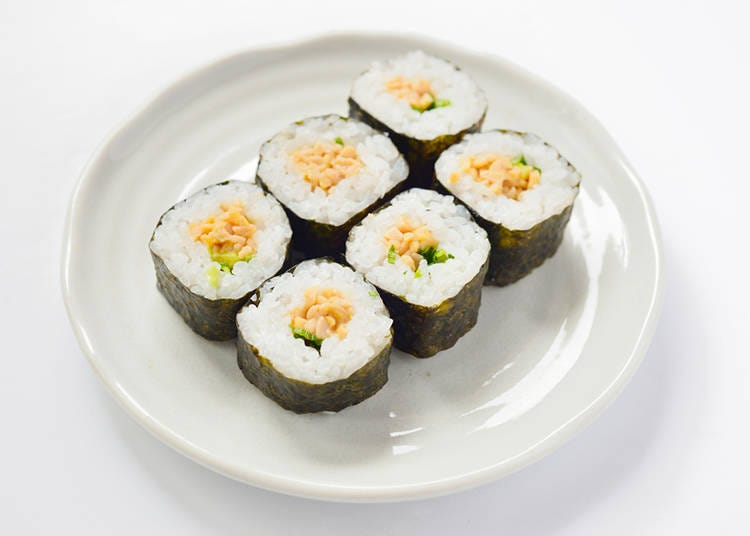 Sauce Variety
Generally, nattō is eaten with soy sauce, but each brand has its own sauce, such as seaweed or bonito flavors. You’ll even find uncommon varieties that feature collagen or lactic acid bacterias, as well as flavors such as perilla leaf, ume (Japanese apricot), black vinegar, salt, and so on. 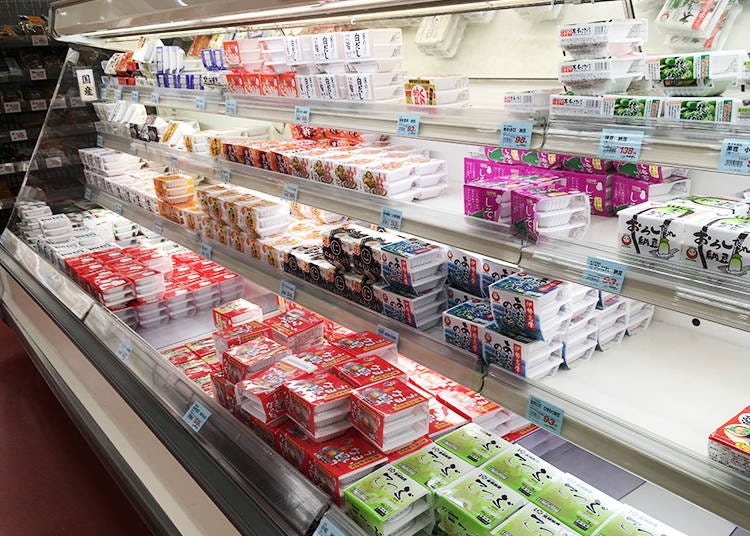 Natto section at the supermarket 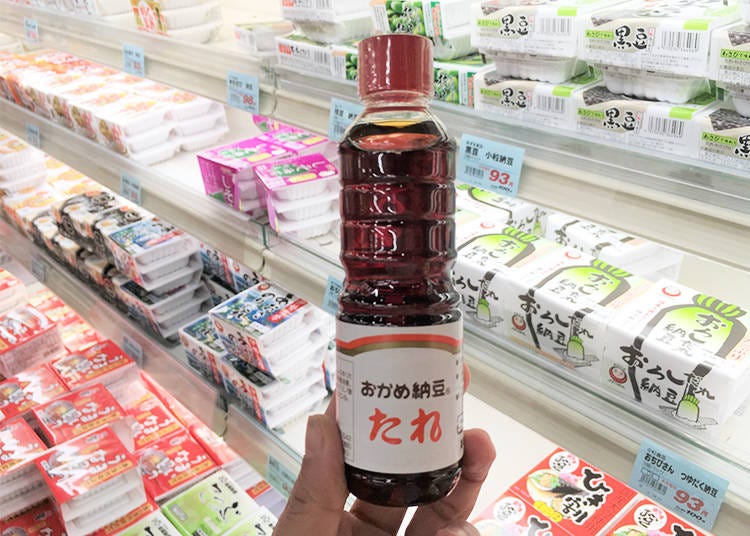 Local Nattō
Every year, the National Natto Contest is held to search for Japan’s very best nattō specialty. The beans are evaluated in regard to the three criteria of aroma, taste, and texture in categories that are mainly about bean size, including crushed, small, ultra-small, medium, and so on.

The 2018 contest saw products from Hokkaido to Kagoshima, drawing nattō brands and manufacturers from all over the country, including many small, local companies.

The title of 2018’s very best nattō in all of Japan went to a medium-sized variety with domestically produced soybeans by Takamaru Food from Aichi Prefecture. It’s a local specialty that is mainly found in supermarkets around the prefecture, as well as at six sales vans that tour the streets every day.

If you want to get a taste of the locally loved nattō, a specific variety can be ordered! 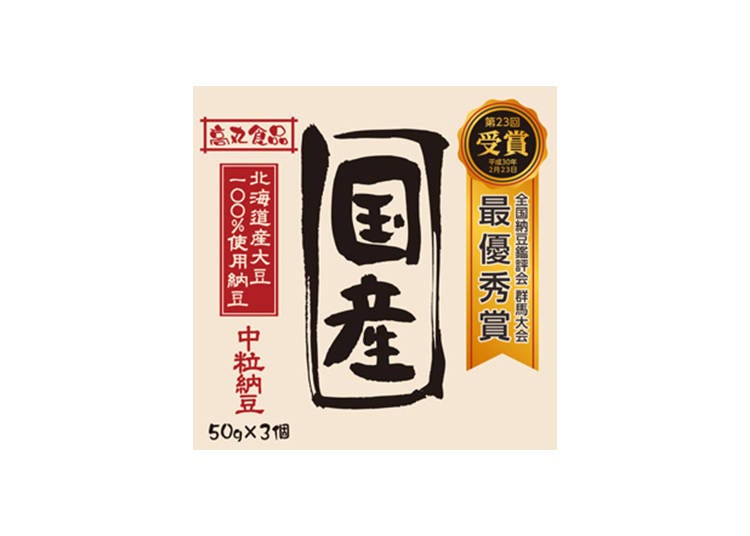 Nattō Sold Internationally
With its reputation as a healthy superfood, nattō is sold outside of Japan at specialty stores or Asian supermarkets. It’s no longer just available at Japanese restaurants, but more and more people start to take note of the stinky, sticky bean for its many health benefits. Especially in cities with a large Japanese population, you’ll find a surprisingly large nattō selection! No matter where in the world Japanese people live, they seem to not want to go without their fermented soybean specialty! 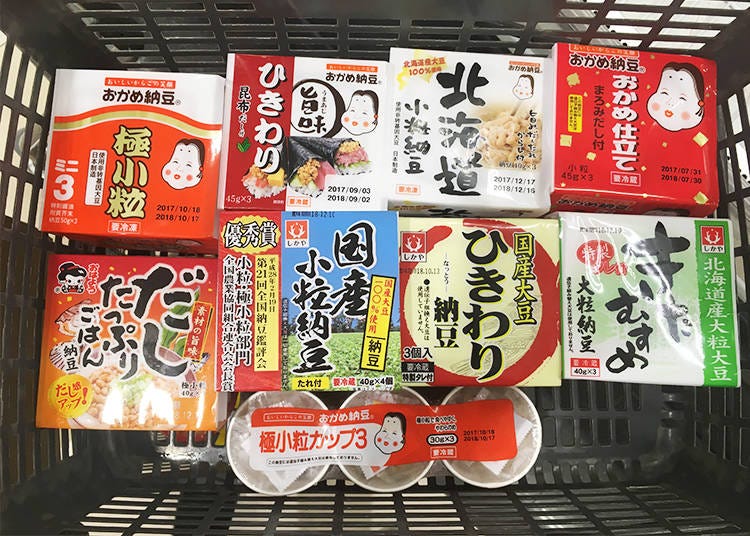 Using natto as an ingredient in recipes

Nattō doesn’t always have to be the star of the show, it also works great as an ingredient for all sorts of dishes. Let’s look at some examples. 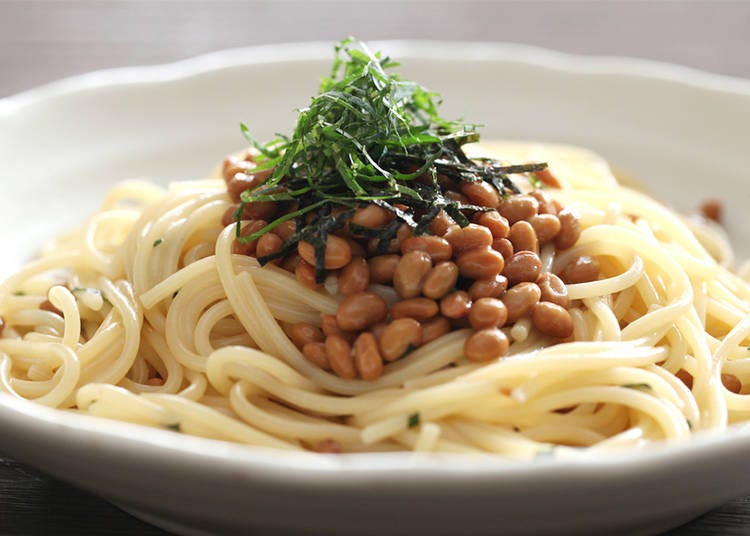 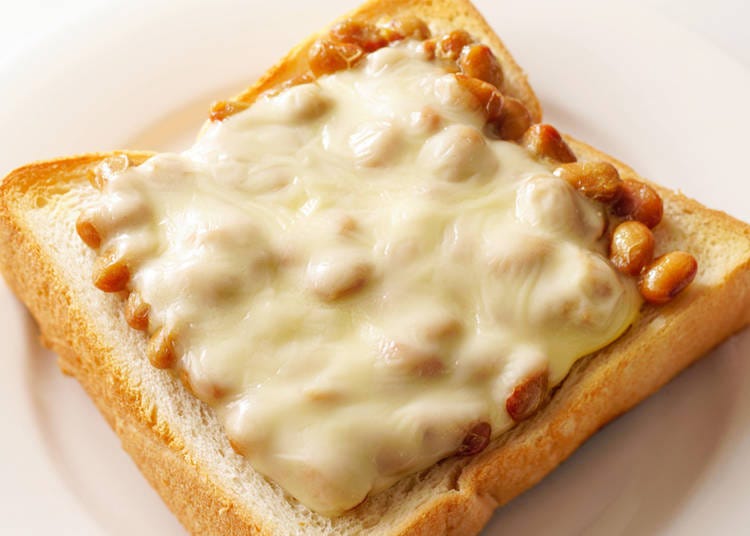 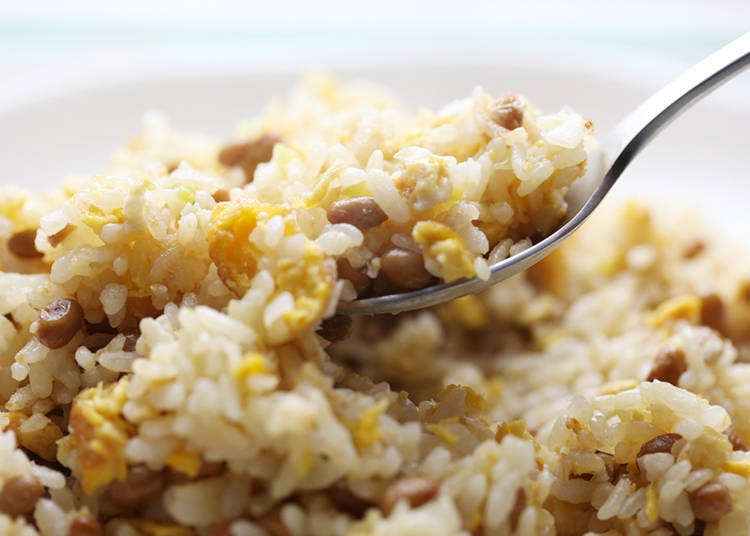 Nattō can’t only be found as packs in supermarkets in convenience stores, but major restaurant chains such as Ootoya or Sukiya offer the fermented specialty n their menu as well. Sometimes, you’ll even find it as a part of a hotel’s breakfast buffet!

By now, you’ve surely worked up the courage to try nattō for yourself and there’s not much left to say other than itadakimasu! What will you think about Japan’s smelly, sticky, gooey superfood?

Japan’s Sensational (And Healthy) ‘Neba Neba’ Dishes
12 Unique Japanese Foods You Have to Try!
*This information is from the time of this article's publication.
*Prices and options mentioned are subject to change.
*Unless stated otherwise, all prices include tax.